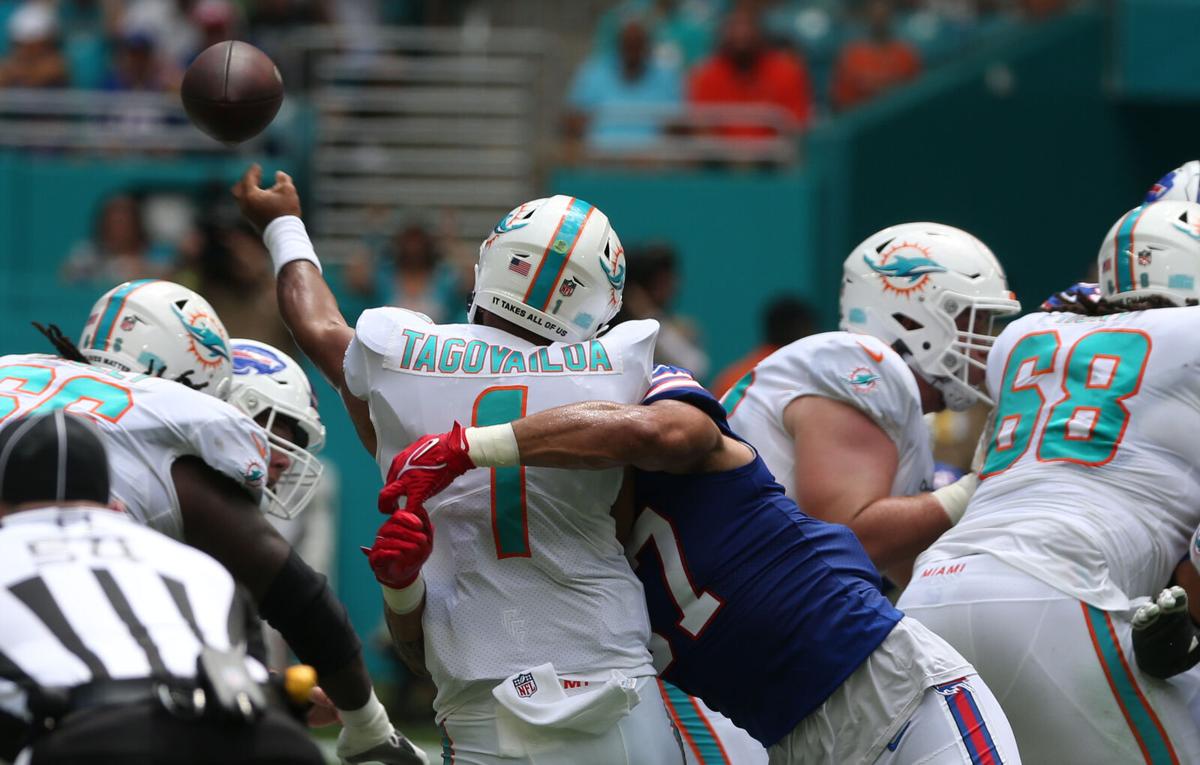 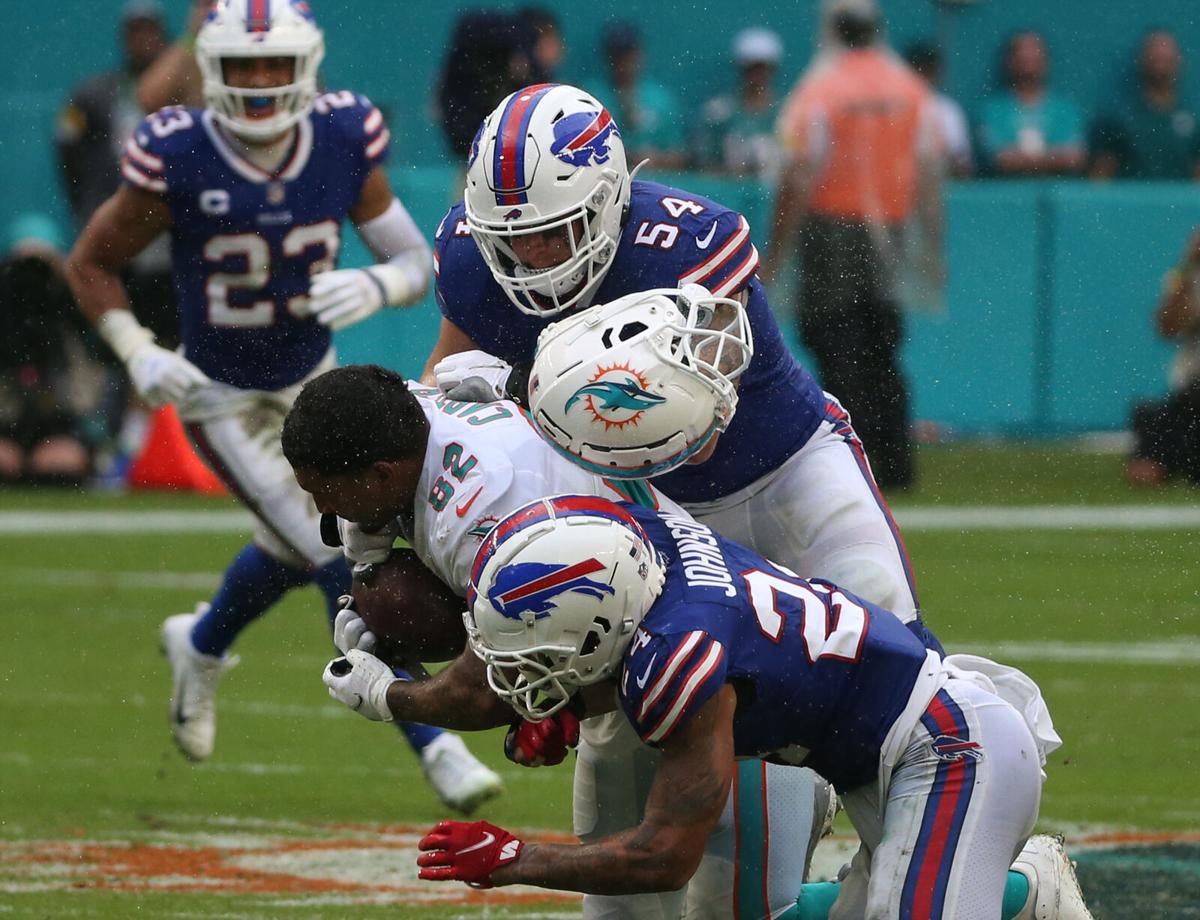 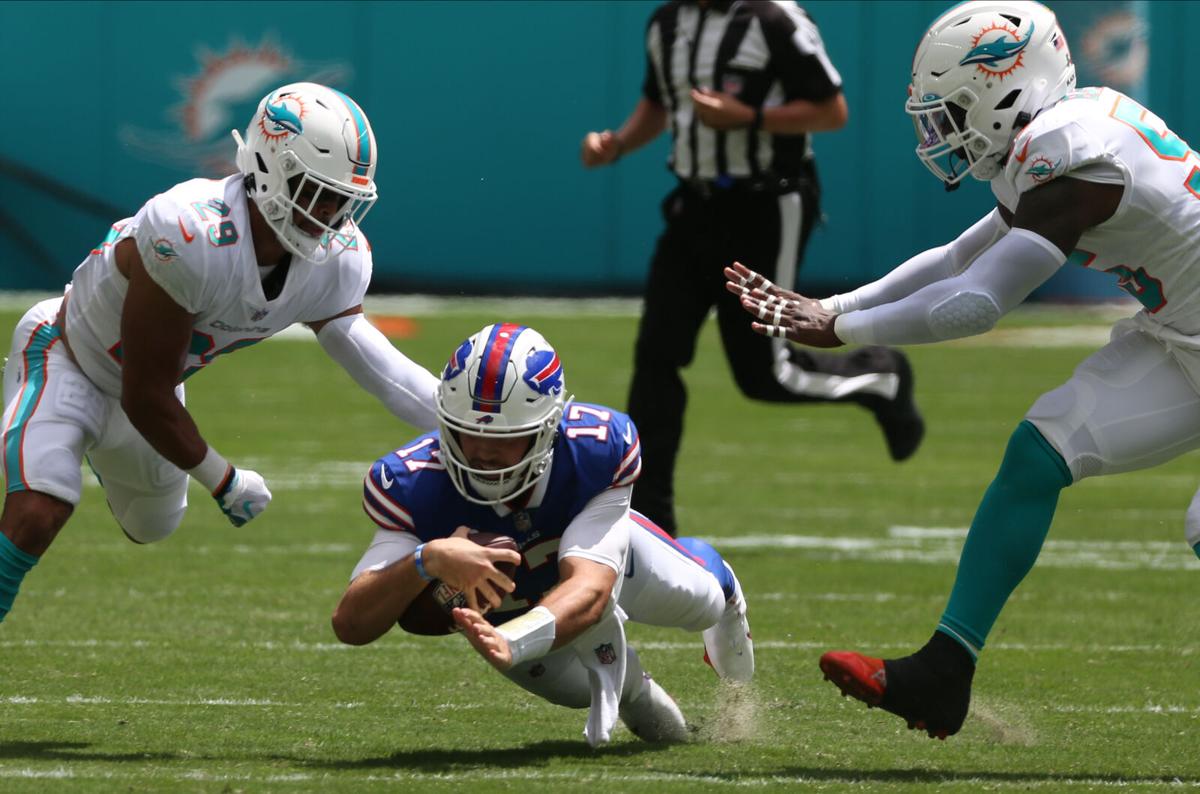 Buffalo Bills quarterback Josh Allen (17) rushes for a first down while pursued by Miami Dolphins safety Brandon Jones (29) in the first quarter at Hard Rock Stadium in Miami Gardens, Fla., on Sunday, Sept. 19, 2021.

At a point in the fourth quarter, the sound on Fox affiliate WUTV disappeared briefly on cable during a commercial in the Buffalo Bills’ 35-0 victory Sunday over the Miami Dolphins.

Cable viewers may have thought that they were going to get a Spectrum gift of silence for those who had tired of hearing Fox analyst Matt Millen. But, alas, the sound returned.

I haven’t read so much grumbling on social networks during a Bills blowout win about one announcer since CBS moved Phil Simms from the booth to its studio show. I even had friends texting me that I should hammer Millen, who was once considered one of the best sports analysts on TV and had a 2018 heart transplant.

Early in the first quarter, I prematurely tweeted that Millen, who won three Super Bowls in his 12-year NFL career, was a better analyst than he was a general manager.

It was a low bar, since his 2001-08 performance as the Detroit Lions general manager was disastrous, including an 0-16 season.

If so, he didn’t have much time to do homework for Sunday’s game and Fox wasn’t giving high priority to a contest between AFC rivals they rarely carry.

Millen is from the Jon Gruden School of Broadcasting in that he annoyingly praises as many players as Gruden did when the Las Vegas coach was ESPN’s “Monday Night Football” analyst on ESPN.

I suspect the social network hate was more about Millen’s other annoying habit of relying on cliches in place of insight. To name a few better left unsaid, there was “the ball is the game,” “don’t beat yourself” and my personal favorite, “you have to play well. If you don’t play well, you’re going to get beat – eventually.”

We’ve heard all that before. More importantly, we didn’t hear anything from Millen we didn’t know.

He doesn’t always get his points across smoothly. But in fairness, he sees plays as they happen, describes replays well and singles out players who make good plays and occasionally those who don’t. He notably criticized Miami’s excellent cornerback Xavien Howard for giving up on the touchdown pass from a scrambling Bills quarterback Josh Allen to Stefon Diggs.

Millen’s best attribute was his old guy’s sense of humor, which was more important in a game loaded with garbage time because of the Bills’ domination.

I mean who doesn’t find an analyst entertaining who makes references to the Three Stooges, Maxwell Smart, Tolstoy, Archimedes, Einstein and flatulence?

To borrow a Smart phrase, “would you believe?” that in a game that became a rare NFL laugher, I found Millen’s humor to be so bad at times that he was good at the entertaining part of an analyst’s job in a 35-0 game.

The best example of being so bad that it was good came when he made a crude complaint about Miami’s Emmanuel Ogbah being given a questionable roughing the passer call: “You can’t even fart on guys anymore,” said Millen.

He also gets credit for expressing an opinion on two of the times the Dolphins went for it on fourth time BEFORE the failed play ran, a stand not all analysts take.

I was surprised by some criticism sent Gaudin’s way. I wasn’t surprised that the voice of "Madden NFL" for EA Sports has a good excitement level on big plays since he brings excitement to just about every Madden play. He was especially sharp on the Devin Singletary 46-yard touchdown run. He also asked Millen appropriate questions.

But he lost me before the kickoff by suggesting Miami would kind of have “a stranglehold” on the AFC East division with a victory to go to 2-0 when there would be 15 games left in the season including a return Bills date with Miami at Highmark Stadium.

He also needs to find a meteorologist. He asked Millen whether the hot weather in Miami would hurt the Bills, which ignored that it is pretty hot in August and September in Western New York, too.

If sideline reporter Sarah Kustok reported on the whereabouts of Bills linebacker Tremaine Edmunds it must have been during the silent period of the broadcast. Twitter follows revealed Edmunds was dehydrated.

Millen protested, saying “no NFL guy would ever say adorable.” Then Kustok said that Bills safety Micah Hyde told her to say it.

The discussion was, well, adorable and entertaining.

Thank You, Mike: Fox rules expert Mike Pereira was brought in a few times to confirm a very late grounding call against Miami and a Dolphin fumbled punt.

Throwing Shade: Kustok noted that the Dolphins make sure the visitors side of the field is the one without shade because that gives Miami an advantage. Imagine what the score would have been if the Dolphins didn’t have that advantage.

One Step Rule: After Miami offensive tackle Austin Jackson was called for being illegally downfield for going past a yard from scrimmage to negate a Miami gain, Millen cracked: “He’s not eligible. We need to explain that to him. Unfortunately, for guys like that one step is a yard.”

Just Say No: When Miami went for it on fourth down near midfield when down 7-0, Millen said: “I would say no.” The play failed. Millen agreed the second time Miami coach Brian Flores decided to go for it on a fourth and 2 inside the Bills’ 20. It failed again.

Clean Hit: When Miami starting quarterback Tua Tagovailoa was crushed by Bills lineman A.J. Epenesa on the play that led him to exit the game, Millen immediately called it a “clean hit.” Good to know.

The Jersey Test: Noting how loud it sounded in the stadium, Millen noted,” I think there are more Bills jerseys here than Miami jerseys.” That is often the case in Miami.

Allen and the Hall of Famers: Millen constantly praised Allen, who wasn't having his best day. Millen noted early that Allen had characteristics of future Hall of Famer Ben Roethlisberger (size) and Hall of Famers John Elway (athleticism) and Brett Favre (arm) and added he eventually will see things like Peyton Manning.

Extending Praise: On the touchdown to Diggs, Gaudin noted that Allen “extended and extended” the play before hitting a receiver who got up after falling down while Howard stopped playing.

Fair Assessment: It’s hard to praise a quarterback of a team that doesn’t score, but in true Gruden fashion Millen repeatedly praised Dolphins quarterback Jacoby Brissett and blamed the Miami offensive line for not giving him enough time to throw. It seemed a fair assessment.

Fat Guy Talk: During the heat discussion, the self-deprecating Millen said “fat guys” like him preferred to play in the cold rather than the heat.

He Was Everywhere: Millen praised Bills linebacker Matt Milano frequently, noting “he has been playing excellent football” after he recorded a sack after being untouched. The praise would have meant more if Millen didn’t praise so many others.

Recruiting Talk: Millen, a former Penn State star, noted that he unsuccessfully recruited quarterbacks Dan Marino and Jim Kelly for the Nittany Lions and added he told Kelly, “He’d be the best throwing linebacker on the team.” The Bills Hall of Fame quarterback famously was told he would be a linebacker at Penn State.

Get Smart Talk: After Allen failed to score a rushing touchdown by inches, Millen referenced Maxwell Smart of the classic comedy “Get Smart,” by saying he “missed it by THAT much.”

Moe, Larry and Curly: The Three Stooges reference came after a play by Miami running back Myles Gaskin led Millen to say “woo-woo-woo.”

Mustard Talk: On a couple of Allen underthrows, the announcers noted that he needed to “put more mustard” on them. The quarterback seemed to be compensating for the overthrow of Emmanuel Sanders against Pittsburgh.

The Wrestler: The shots of Bills coach Sean McDermott wrestling have become as big a Bills cliché on telecasts as Nick O’Leary was the grandson of Jack Nicklaus and Ryan Fitzpatrick graduated from Harvard.

War and Peace: At one point, Allen’s protection was so good from the offensive line that Millen said, “Tolstoy could be written back there.” Of course, Tolstoy wasn't a novel. Leo Tolstoy was the writer, perhaps best known for “War and Peace.”

“A Wonderful Guy”: That’s how Millen described Tagovailoa. Dolphins fans would prefer he was a wonderful quarterback. Millen also praised the referee. It was adorable. Who praises referees? I’m not sure Gruden even did that.

Fly Paper: After noting a cornerback was defending a receiver so well that he was like fly paper, Millen asked, “Do they even make fly paper anymore?” Any insect can tell you that they do.

Famous Last Words: Apparently trying to show Miami fans he is a “wonderful guy,” Millen said throughout the game that the Dolphins needed to score some points. To borrow a Smartism, “would you believe,” they never did? That’s because the Bills defensive line had a “stranglehold” on Miami’s offensive line.

Because the Bills are the home team Sunday against Washington, an NFC team, the game will once again be carried on Fox affiliate WUTV.

Don't miss our coverage of the Buffalo Bills' 35-0 win over Miami in Week 2!

Alan Pergament: My view on whether you should take a big leap and watch 3 new network shows

Buffalo Bills quarterback Josh Allen (17) rushes for a first down while pursued by Miami Dolphins safety Brandon Jones (29) in the first quarter at Hard Rock Stadium in Miami Gardens, Fla., on Sunday, Sept. 19, 2021.