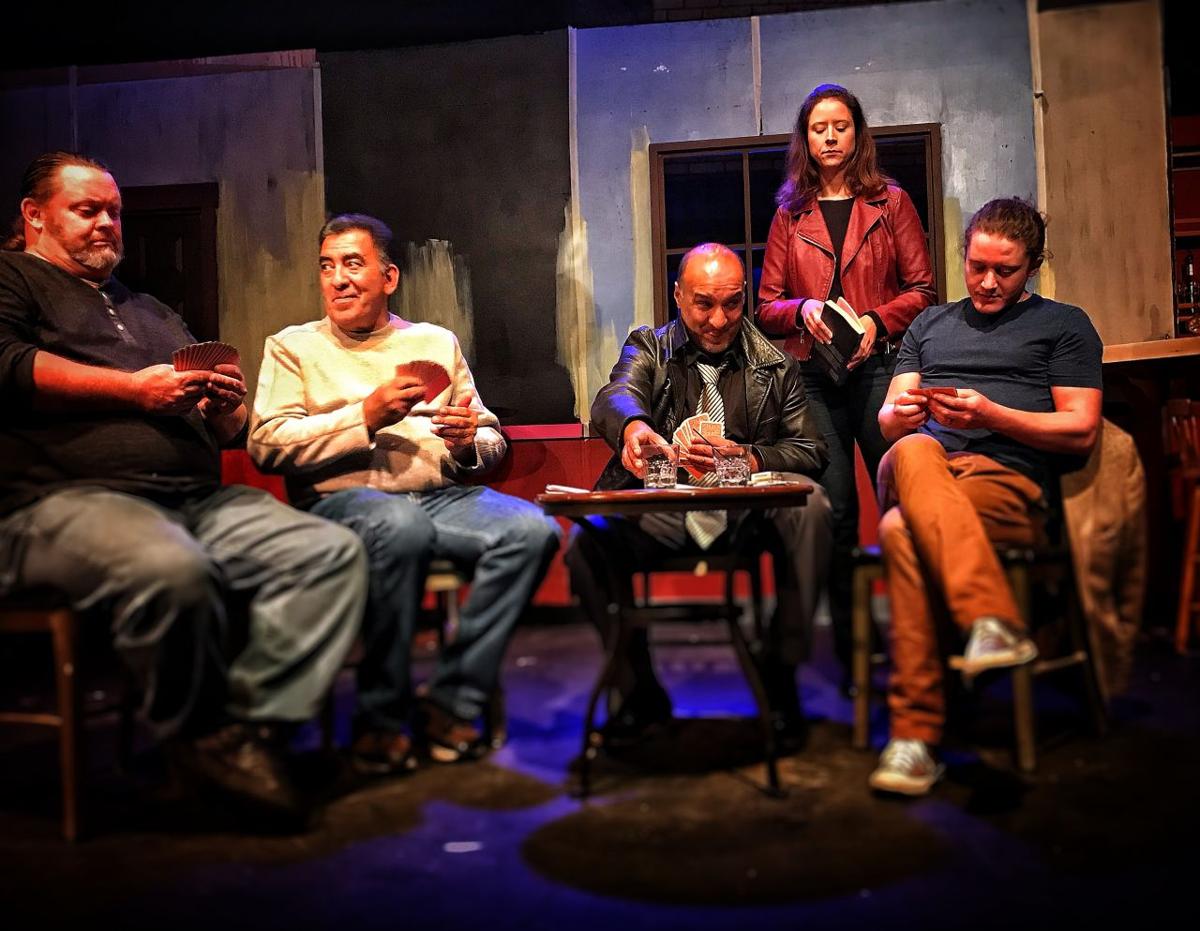 Travelers caught in a snowstorm – played by John F. Kennedy, left, Victor Morales, Monish Bhattacharyya, Suzie Hibbard and Timothy Coseglia – get to know each other in "The Kindness of Strangers" presented by the Navigation Theatre Company. (Photo courtesy of Compass Performing Arts Center) 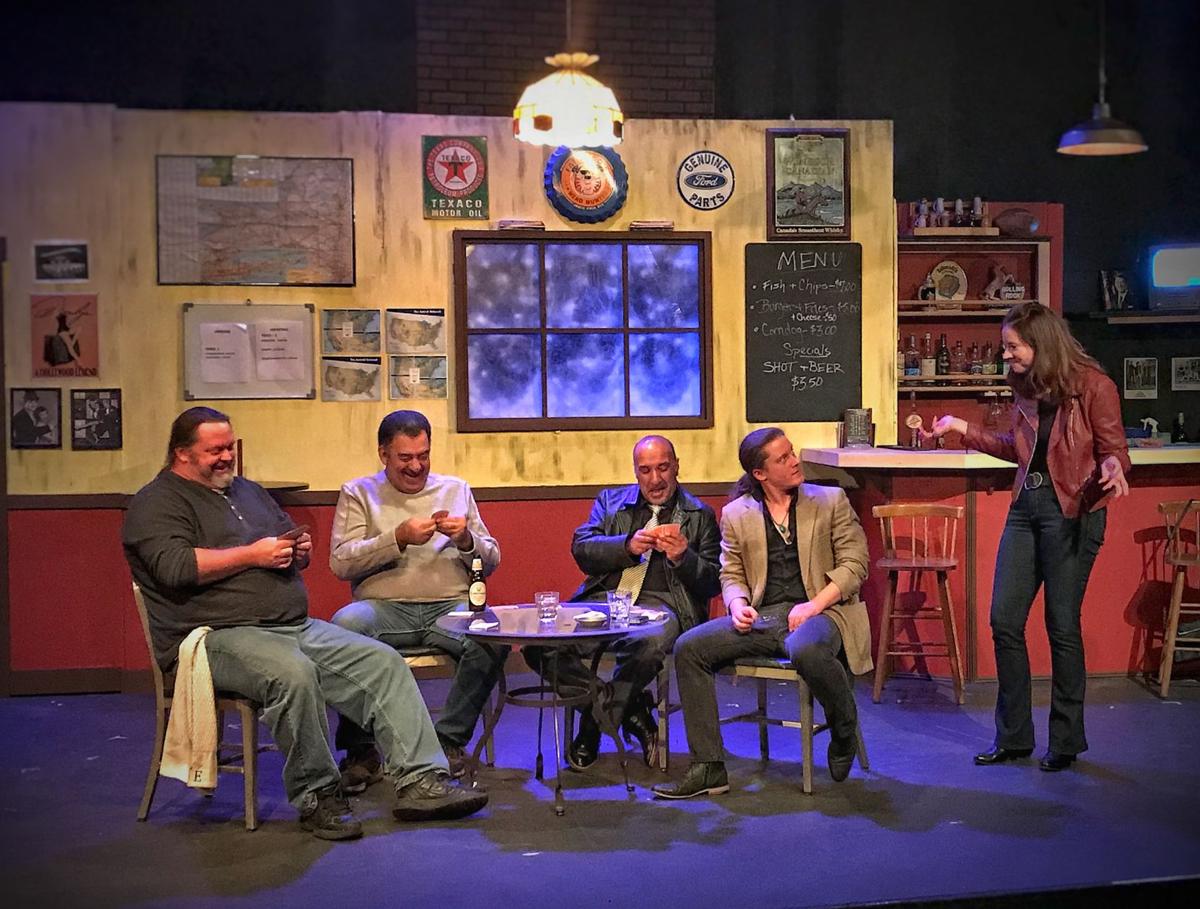 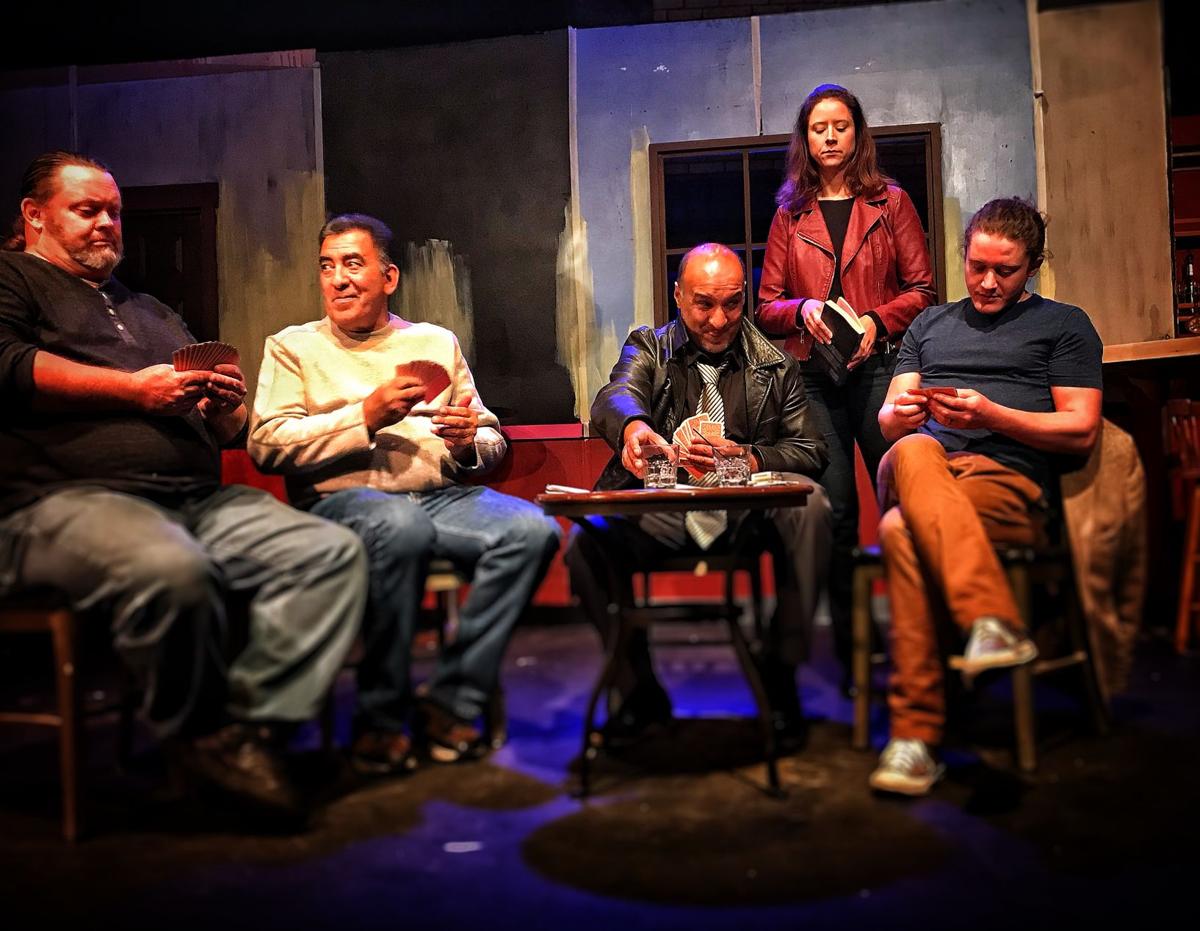 The weather, as we in Buffalo know more than most, can often change even the best-laid plans. No matter how much you may want to go somewhere, sometimes nasty weather simply makes you stay put.

A snowstorm produces just such suspension of travel plans in the debut production from Navigation Theatre Company, the enjoyable “The Kindness of Strangers.” With all trains having canceled their stops at this small town somewhere in downstate New York, a group of temporarily delayed travelers in Mulligan’s Bar find themselves caught up in a gripping and emotional conversation.

Written by local playwright Mark Humphrey, “The Kindness of Strangers” unfolds with the natural rhythms of strangers moving from the initial awkwardness and tension of a chance meeting, to the eventual calm of a focused, general conversation. Humphrey’s characters come to life, both through their witty banter and their occasional moments of extended storytelling.

Through his direction and his excellent set design, Matthew LaChiusa allows Humphrey’s conversation-oriented script to thrive. LaChiusa has created a compelling vision of a comfortable dive bar, complete with a menu, dartboard, bathroom, television and eye-catching advertisements.

With many seats to choose from in a spacious bar, LaChiusa’s set allows for a surprising variety of interactions in the single-set play. Some very clever use of lighting allows the bar area to become a separate scene for a key conversation between the bartender and one patron, even as the others go on playing the card game that keeps the characters chatting happily.

At the heart of the play lies a collision of big-city celebrity with small-town anonymity. Providing the play’s standout performance, Timothy Coseglia plays an intense, arrogant actor named Jackie Mantle. Having found his career damaged by being tried for the hit-and-run murder of his ex-wife (even though he was acquitted), the edgy and ever sarcastic Jackie is there looking for work.

Rubbing everyone the wrong way from the moment he steps into the bar, Coseglia’s Jackie soon becomes the center of attention, as many express skepticism that he did not kill his ex-wife. Often bickering with his personal assistant, Linda (played adeptly by Suzie Hibbard), Jackie steadfastly maintains his innocence, with his intense sincerity marked by his constant correction of others that it was his “ex-wife” (not his wife) who was killed. Jackie’s consistent insistence that acting is a difficult profession adds a very humanizing touch.

Hibbard provides a crucially effective performance as Linda. While she at first largely ignores the others, preferring to read Kurt Vonnegut’s “Slaughterhouse Five” rather than join them in their game of cards, she occasionally joins the conversation to rail against Jackie’s ex-wife, who was a rude and demanding person who treated her like a servant.

The other patrons and bartender are all integral parts of the conversation. Monish Bhattacharyya is excellent as Peter, a sleazy cynic whose initial attempts to flirt with Linda prove more nefarious when we learn that he is a pornographic filmmaker always on the lookout for acting talent. Victor Morales’s earnest role as Frank provides emotional resonance, as he explains his desperate and transient life as a cancer patient. Meanwhile, John F. Kennedy’s wise bartender Billy provides canny psychological insights.

While I won’t reveal anything about the play’s resolution, I can say that a final line voiced by Linda nicely encapsulates the play’s power. Saying that she likes the snow and wishes it would cover over everything, Linda indirectly points out the surprisingly engrossing, if melancholy, outcome of life’s storms.

“The Kindness of Strangers”

She proudly calls herself a “weather geek” and produced a weekly segment on social media, "Heather's Weather Whys," in which she answered viewer questions about the weather.

WIVB's Christy Kern exits station, explains her mysterious absence was due to Covid-19

"I tried to return to work, but it was very difficult for me to anchor the newscasts while experiencing the lingering shortness of breath," Kern explained.

With 20 to 25 trucks expected for the first session, instead of 30-ish in prior editions, there’ll be a little more room to maneuver and relax on the Larkinville campus.

Alan Pergament: WUTV's new newscast will rely on news, weather and sports anchors outside of Buffalo

WGRZ-TV to premiere 9 p.m. newscast to be carried on digital channel and streamed

The 30-minute newscast will initially run from Monday through Friday and be lead at the start by a rotation of anchors.

Travelers caught in a snowstorm – played by John F. Kennedy, left, Victor Morales, Monish Bhattacharyya, Suzie Hibbard and Timothy Coseglia – get to know each other in "The Kindness of Strangers" presented by the Navigation Theatre Company. (Photo courtesy of Compass Performing Arts Center)