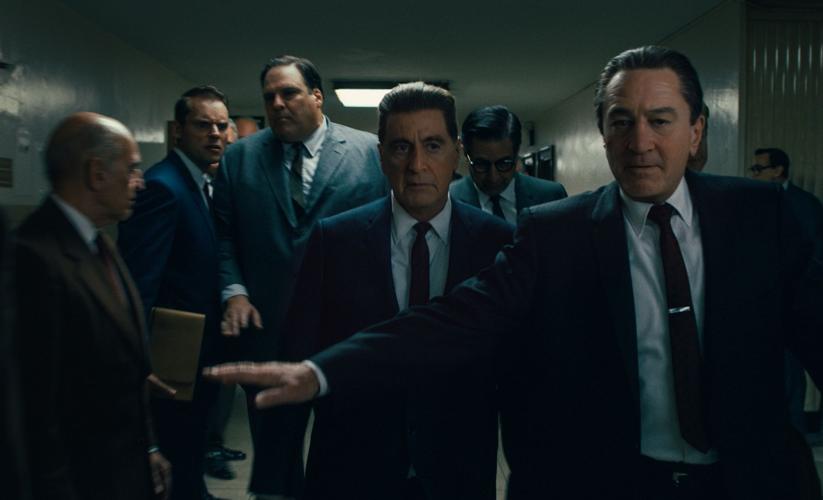 Martin Scorsese's "The Irishman" will open in two local independent theaters – the Dipson Amherst and North Park – before it streams on Netflix. Pictured are Al Pacino as Jimmy Hoffa, center, and Robert De Niro as Frank Sheeran. (Photo courtesy of Netflix) 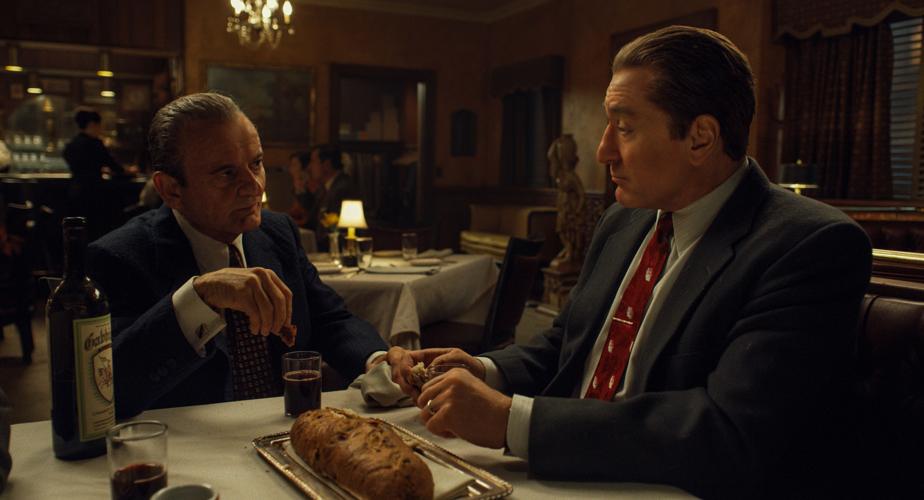 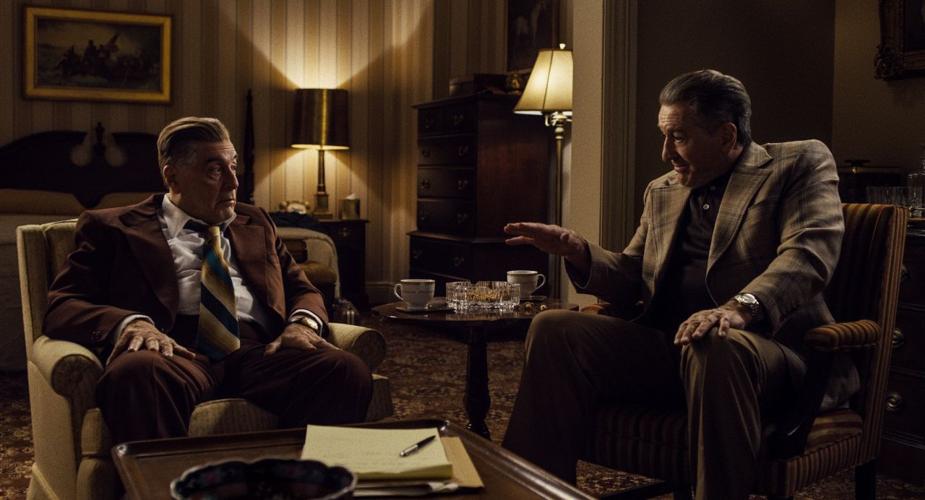 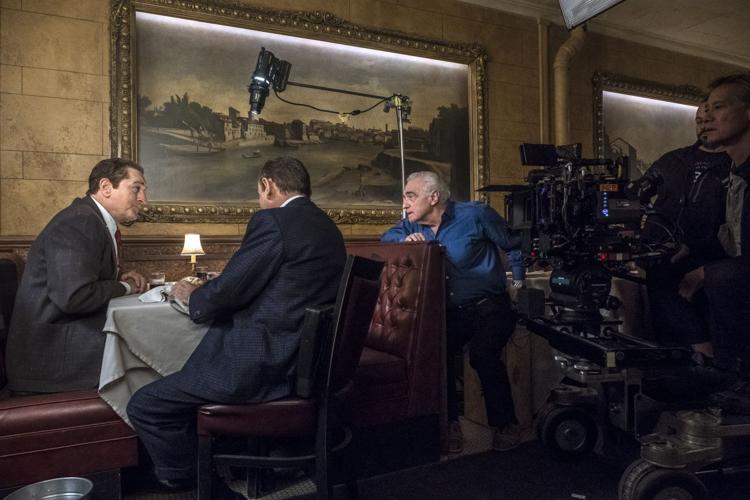 Support this work for $1 a month
By Christopher Schobert

The release of Martin Scorsese’s long-awaited gangster drama "The Irishman" is atypical — to put it mildly. Then again, "The Irishman" is no ordinary film. An epic, decades-spanning drama starring Robert De Niro, Al Pacino and Joe Pesci, the film tells the story of the brutal and ultimately deadly collision between Jimmy Hoffa and the Mafia. It is somber, contemplative, long — 210 minutes — and brilliant.

It’s also not coming to most cinemas near you. “The Irishman” is being released by Netflix, and arrives on the streaming giant on Nov. 27. Battles between Netflix and major theater chains mean that no Regal or AMC location will screen the film.

The Buffalo area is lucky, then, to have “The Irishman” opening in two local, independent cinemas before it premieres on Netflix: the North Park Theatre (1428 Hertel Ave.), from Nov. 21 to Dec. 5, and the Dipson Eastern Hills (4545 Transit Road, Clarence), from Nov. 21 to 28 (with additional dates to be announced).

For Dipson Theatres President Michael Clement, the opportunity to book “The Irishman" was a no-brainer. This was the long-awaited reunion of Scorsese and his “Goodfellas” and “Casino” co-stars De Niro and Pesci, plus the master director’s first film with Pacino.

“Typically, we would never consider showing a movie that is going to be streaming so soon,” Clement said. “We knew we wanted to play this movie as soon as we read about it. We firmly believe that ‘The Irishman’ should be seen in a theater. That is why we are doing something that we would not normally do.”

“In both cases, you have cinema auteurs who believe in the value of the theatrical experience, and so do we,” Barker said. “We are huge fans of Scorsese's work, and we knew that he would want a theatrical run for ‘The Irishman.’ ”

Dipson’s Clement said a typical mainstream studio release will play on about 4,000 screens, for four to eight weeks. After 90 days, most films are available on video on demand. Netflix’s plan for “The Irishman” was much different than the norm.

“When I called my film buyer to inquire about playing this movie locally, he informed me that we would only be allowed to show it for five days before it would be on Netflix. That was very disappointing to hear,” Clement said. “I told him that I believe there are enough movie fans locally that it would make sense for us to play the movie on the big screen at the Eastern Hills Mall Cinema.”

The North Park’s Barker said many local filmgoers will flock to “The Irishman” in theaters, rather than wait for Netflix.

“Although exhibitors are right to want to preserve a theatrical window, there is evidence that streaming movies and attending cinemas is not an either/or proposition,” Barker said. “Cinephiles like seeing movies, period.”

Barker and Clement both agree that “The Irishman” demands a big screen.

“Seeing a movie in a theater is a different experience than seeing it at home,” Clement said. “Most movies are meant to be seen in a theater. This is an example of one of those movies. You cannot get the same feeling at home, regardless of the size of your television.”

As Barker puts it, “Film is an art form best experienced on the big screen. We've heard from many Western New Yorkers that they are really excited to see ‘The Irishman,’ and we can't wait to bring it to them.”

Stations usually try to provide balance on election nights by having representatives of both parties analyze elections, but only WGRZ-TV (Channel 2) did that Tuesday, Pergament says.

Here are some local festivities to celebrate the red, white and blue through the long holiday weekend.

Mary Mara, an actress known for roles on "ER" and "Ray Donavan," has died at age 61 after police believe she drowned in a New York river.

Since the WIVB-TV (Channel 4) Call for Action reporter recently announced his retirement, Vaughters has been getting Buffalove from young and old alike.

The singer and songwriter was convicted of racketeering and sex trafficking last year at a trial that gave voice to accusers who had once wondered if their stories were ignored because they were Black women.

The Splash Mountain rides at Disneyland and Disney World will reopen in 2024 with a theme replacing a backstory viewed as perpetuating racist stereotypes.

As Moe. celebrates its 30th anniversary with a tour that includes a Thursday stop at the Buffalo Outer Harbor Lakeside Lawn, the Buffalo-born band has much to to be grateful for, but also, plenty of wounds to nurse.

Maya Hawke: I 'wouldn't exist' if my mom Uma Thurman didn't get an abortion

Martin Scorsese's "The Irishman" will open in two local independent theaters – the Dipson Amherst and North Park – before it streams on Netflix. Pictured are Al Pacino as Jimmy Hoffa, center, and Robert De Niro as Frank Sheeran. (Photo courtesy of Netflix)