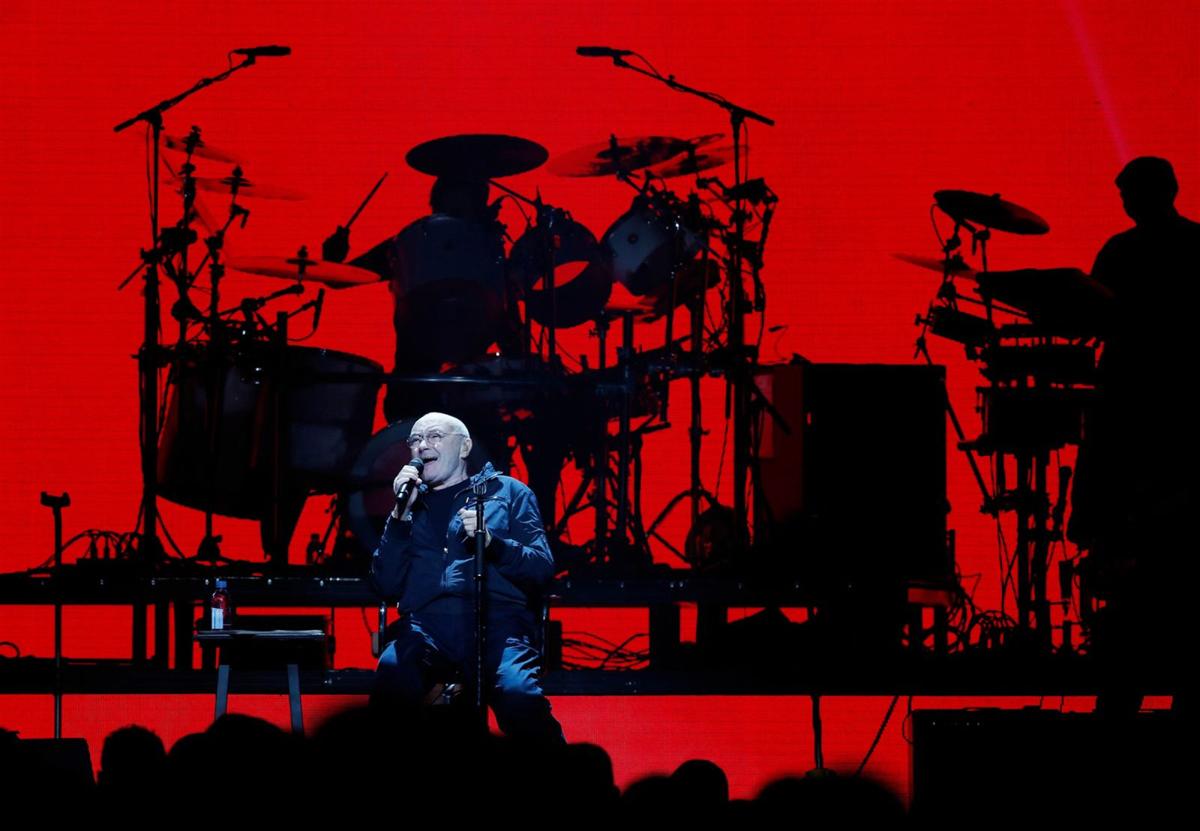 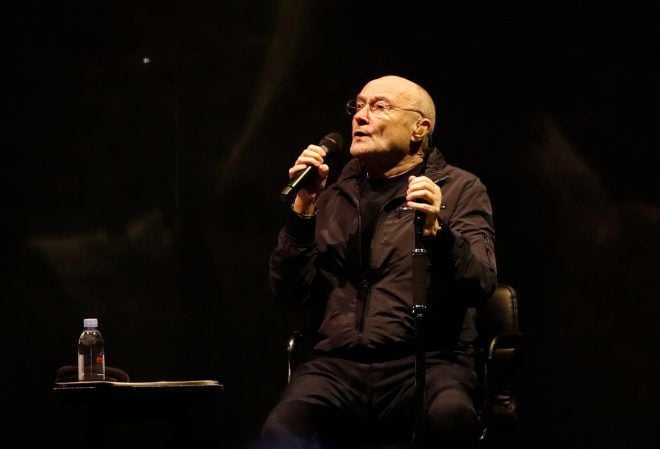 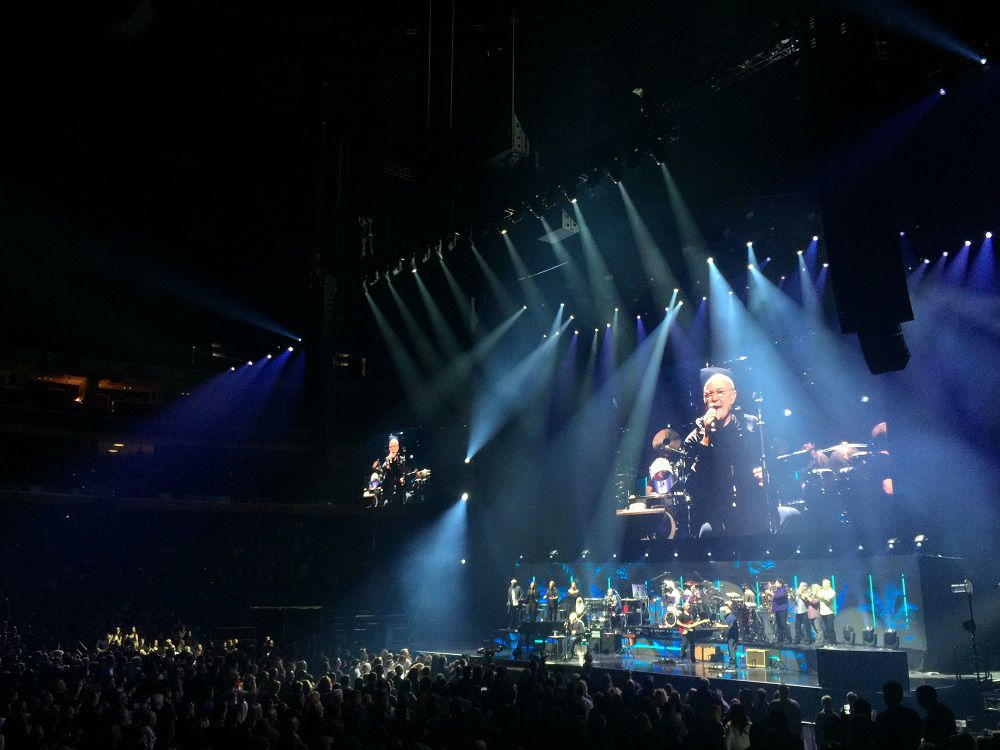 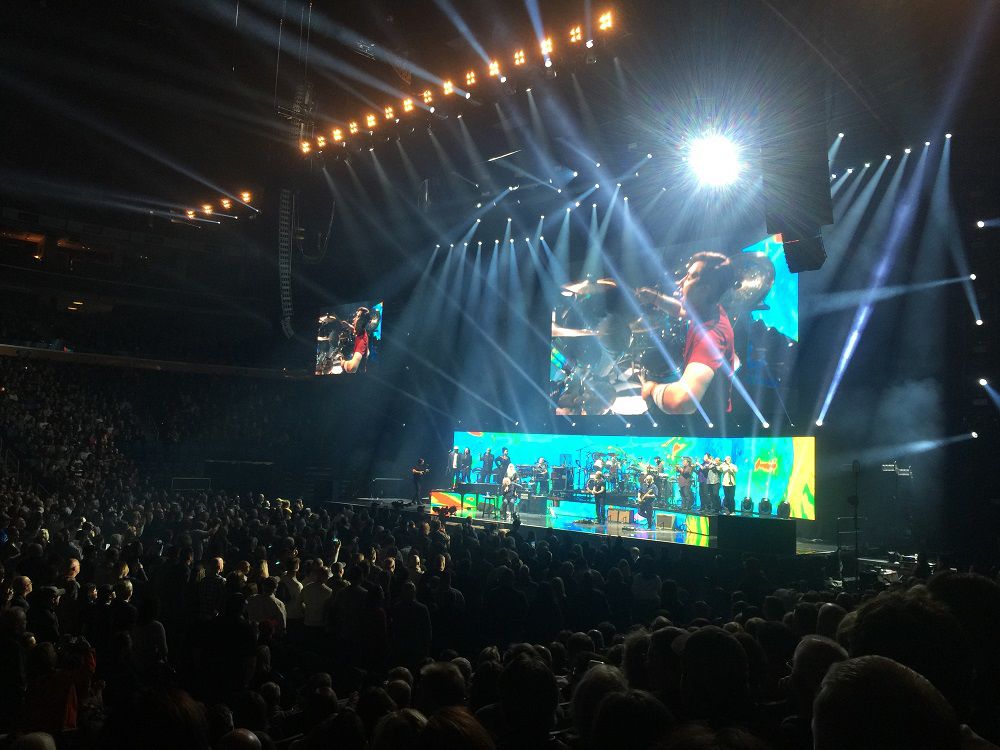 About halfway though his performance at KeyBank Center on Friday, Phil Collins pulled the chair he’d been sitting on throughout the show right to the edge of the drum riser at the rear of the stage. He bowed his head, placing it inches away from the bass drum, his foot keeping time with the hi-hat, his arms flailing in air-drummer ecstasy to the ride cymbal groove. Collins’ 17-year-old son, Nicholas, was manning the kit, and his father appeared to be enraptured by his playing, as was the full house out front.

Collins, one of the greatest drummers in the history of rock and pop music, can no longer play, back and neck problems and several surgeries having robbed us of his iconic, fiery, virtuosic drumming style. This fact made the exchange between father and son at the set’s midpoint all the more poignant.

The father, battered and bent by 50 years on the road and in the recording studio, was passing the baton to his more-than-able son and experiencing the music vicariously.

I’ll admit it – I was misty-eyed, a tad bit choked up. For his part, Collins broke into unabashed tears when, after he introduced young Nic, the crowd erupted into an extended ovation. It was a frankly beautiful, deeply moving moment in a show that turned out to have more than a few such moments.

By the time he arrived in Buffalo, Collins was already deep into his “Still Not Dead Yet, Live!” tour, a round-the-world jaunt that has clearly seasoned the players in his ensemble, young Nic among them. The band – featuring a four-piece horn section, four backing vocalists and such luminaries as guitarist Darryl Steurmer (Genesis, Jean Luc Ponty) and prolific session bass deity Leland Sklar – was incredibly tight and on-point throughout the KeyBank Center show.

And Collins himself – who arrived on stage walking with the aid of a cane and performed from his seat at the front of the stage throughout – was in remarkably fine voice, his high tenor a bit thinner with his 67 years, but still agile and capable of scaling the peaks of his indelible melodies.

It would be fair to suggest that this was all a bit of a victory lap for Collins, as there was no new music to be played, and the set list offered a stroll down a memory lane decorated by some 100 million records sold and more top 40 hits than any other artist in the 1980s.

However, given the physical challenges Collins has faced – struggles which led many to believe that his touring days were well behind him – and the presence of his son and some familiar faces in the band, it felt like something much more. There was a sense of urgency and an underlying passion that flew in the face of the Vegas-style revues favored by many in Collins’ age bracket. You could tell that he still cares. A lot.

The old man wasn’t stingy with the hits, opening with a heart-rending take on the torch song “Against All Odds,” digging into the ruminative ballad “Another Day in Paradise,” and indulging in the shimmering, exuberant up-tempo pop of “Don’t Lose My Number” and “I Missed Again.”

The crowd sufficiently warmed up, Collins reminded us that, once upon a wonderful time, he was the drummer and singer with Genesis, a group of men, he proudly pointed out, that had somehow managed to remain friends for some 50 years. “The odds of you hearing the Genesis songs you want to hear are not particularly high,” Collins quipped, and as if to prove his point, he and the band performed a handful of later-period, pop-centric nuggets of the sort that (back then and still today) made hardcore, old-school Genesis fans just a little bit sick to their stomachs.

No, “Throwing It All Away” and “Follow You Follow Me” are not exactly on par with, say, “Supper’s Ready” or “Squonk,” but they are lovely, catchy and incredibly well-written pop songs, and they were lent muscle and present-day relevance by this stellar band’s performance of them.

The eerie, dramatic “In the Air Tonight” found Nic re-creating his father’s iconic, era-defining drum figure flawlessly, a fact not lost on the by now nearly swooning crowd, the members of which – perhaps surprisingly – represented a broad range of age. By the time Collins’ cheerily reverent take on the Supremes’ beloved 1966 Motown hit “You Can’t Hurry Love” filled the room, the full house seemed to be resonating with a warmth and good cheer that is a rare presence in the world of arena entertainment. These were some seriously good vibes.

That I found this show as moving and enjoyable as I did surprised me, for I’d arrived with the generally low expectations every self-respecting old-school Genesis fan wears like armor whenever confronted with solo Collins or later period Genesis.

Collins wasted no time piercing that armor, however. He’s a remarkably charismatic performer, even when confined to a chair.

And his songbook? It speaks for itself.

Emilia Jones is the next British teen actress taking Hollywood

Emilia Jones is the next British teen actress taking Hollywood