The Old Pink is iconic in Buffalo because it never changes. Count on these: The steak sandwich will be excellent, especially after a couple of Pabst Blue Ribbons; patrons smoking outside will stare at passersby; and the bar at 223 Allen St. will reliably fill up around 3:30 a.m. with customers from all walks of life. It will be dingy. And it was never actually pink.

Now, there is something new at the Old Pink – and it was not by choice. Served an "order of remedy" by the City of Buffalo to remove graffiti from the front of its building within 30 days or face a fine, Molly Brinkworth, whose family has owned the property since 1968, opted for a fresh paint job instead of painting over the spots of graffiti.

Two days before the deadline, Brinkworth said her daughter went shopping for paint and struggled to find the original hue. She could not decide between one that seemed too blue and another that seemed too purple. She chose purple.

The results are causing a stir in Allentown.

The crowd at The Pink went wild when Dana Louise Silvestri arrived dressed as The Pink, in a dark purple dress with painstakingly drawn-on and painted electric green flames.

The color proved a stark departure from its previous look, and a photo shared Sept. 5 on Reddit was captioned: "Look at how they massacred my boy!" Reactions ranged from jarred to disgusted.

"I'm going to throw up," said @gothmess on Twitter.

"The Pink’s exterior is a part of our city, and I hate seeing our city take losses like this," said Cody Osborne, a Buffalo resident.

The Pink's bartenders have been asked relentlessly if the green-and-yellow flames, snowflakes and lightning designs on the front would be repainted – mostly because some Buffalonians boast tattoos with the flames, a few of which are spotlighted on Instagram (@theoldpinkofficial).

Those inked for the Pink should not worry: The flames and other designs will return, Brinkworth confirmed, and even though a throwback to the cityscape on the front wall was considered, it was eventually dropped.

"We won't make their tattoos irrelevant," assured Rob, an Old Pink bartender who declined to give his last name because "that's just not how we do it here." The paint saga did not seem to bother Rob. "Nothing's exact in this bar," he said.

Bartender Nicholas Stilb said a lesson was learned when customers previously were upset by a move away from black-and-white tile flooring. "It was important to us to not change the exterior motif during the repaint," he said. The floor has stopped being a contentious issue, said Brinkworth. "Now people love it."

Brinkworth said she has researched colors to mix with the purple to calm the public outcry. The bar has already been "tagged" with graffiti since repainting, Brinkworth said, and it's not something that really bothers her. "Maybe I want graffiti on my building," she quipped.

The City of Buffalo has an Anti-Graffiti & Clean City program that works with Buffalo police and other city departments to beautify the city. A spokesperson said no tickets nor fines were issued, and that a 311 call prompted the action.

With streetscape projects along Allen Street – including a stretch between Delaware and Elmwood and the now-closed intersection of Allen Street and Elmwood – part of the clean-up process appears to have extended to businesses.

Away from the Pink's grill, the steak sandwich lives on during Covid-19

Tim Cavanaugh, manager at the Pink on Allen Street, might not be able to describe what makes the dive bar’s steak sandwich such a gem, but there’s no question it’s in great demand — even when the Pink isn’t open for business. In collaboration with Thin Man Brewery on Elmwood the last two weeks, Cavanaugh rapidly sold out 120

Graffiti as art or sign of decay has long been debated. But for the quirky Pink, Osborne thought the city should be lenient. "That just adds to the overall character of the place and the area," he said.

Brinkworth said the Pink has never been pink on the outside, and its official name is actually Allen Street Bar & Grill. In 1983, Mark Supples rented from the Brinkworths to open a bar called the Pink Flamingo. The distinction between old and new Pink came eight years later, when the Pink Flamingo moved to 1683 Main St., The News reported.

The Main Street bar colloquially became the New Pink, while the bar on Allen was casually called the Old Pink, which could now live forever.

What does Allentown look and feel like in the “New Buffalo”? What’s been gained and what’s been lost as a new generation of businesses and urban dwellers moved in? Jeff Miers set out to find

10 great things that happen after 2 a.m. 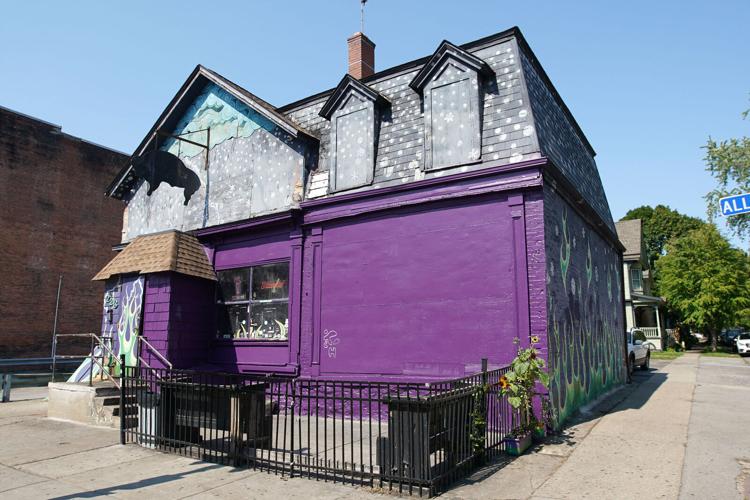 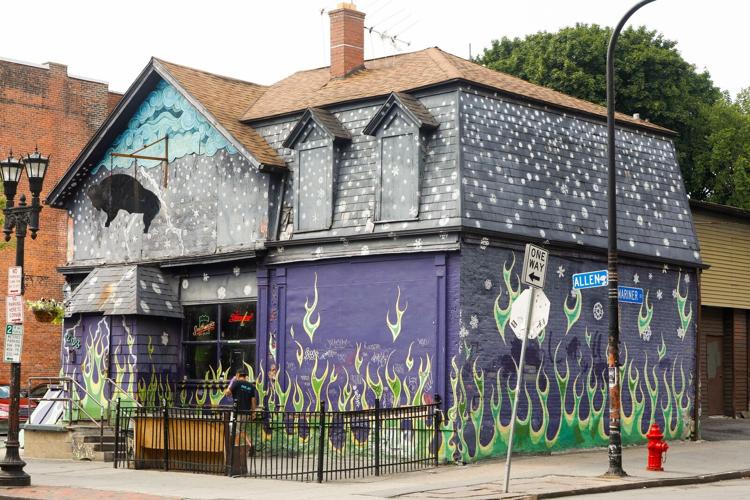 The previous bluish purple hue of the Pink's exterior until early September 2022, when the City of Buffalo served the bar with an order of remedy to remove the ample graffiti. 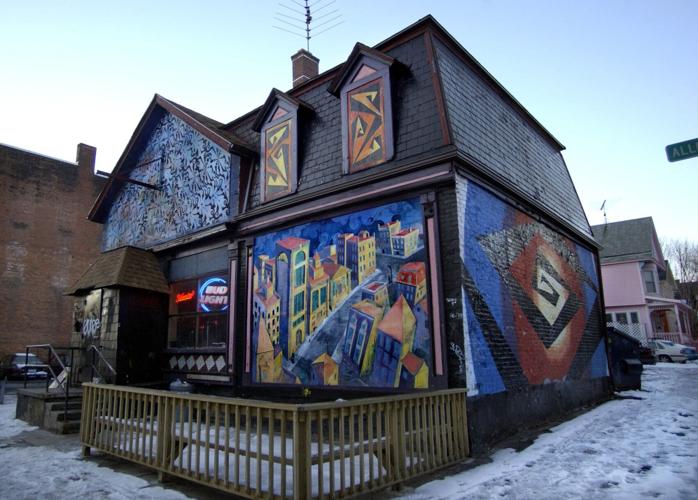 The Old Pink, pictured in 2004 with a cityscape of Buffalo painted on the outside.