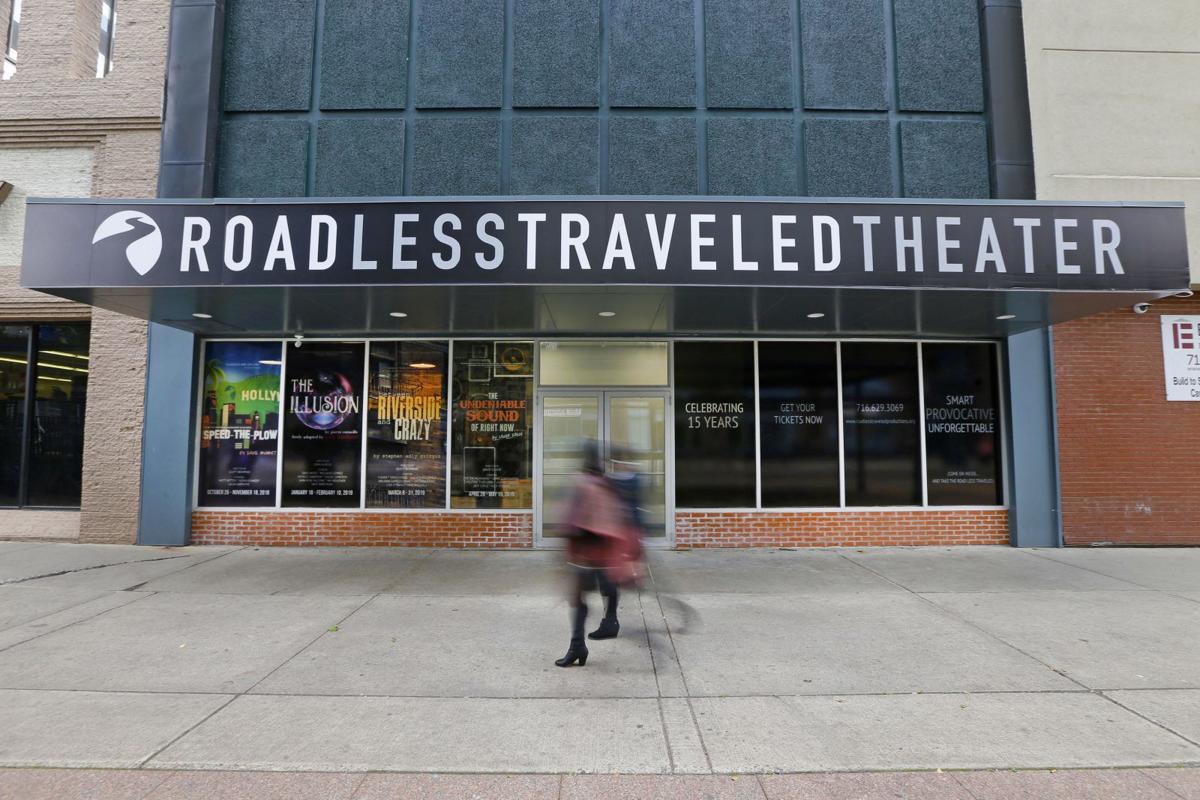 Visit a local theater for something to do that is different than going out to dinner. (Robert Kirkham/Buffalo News) 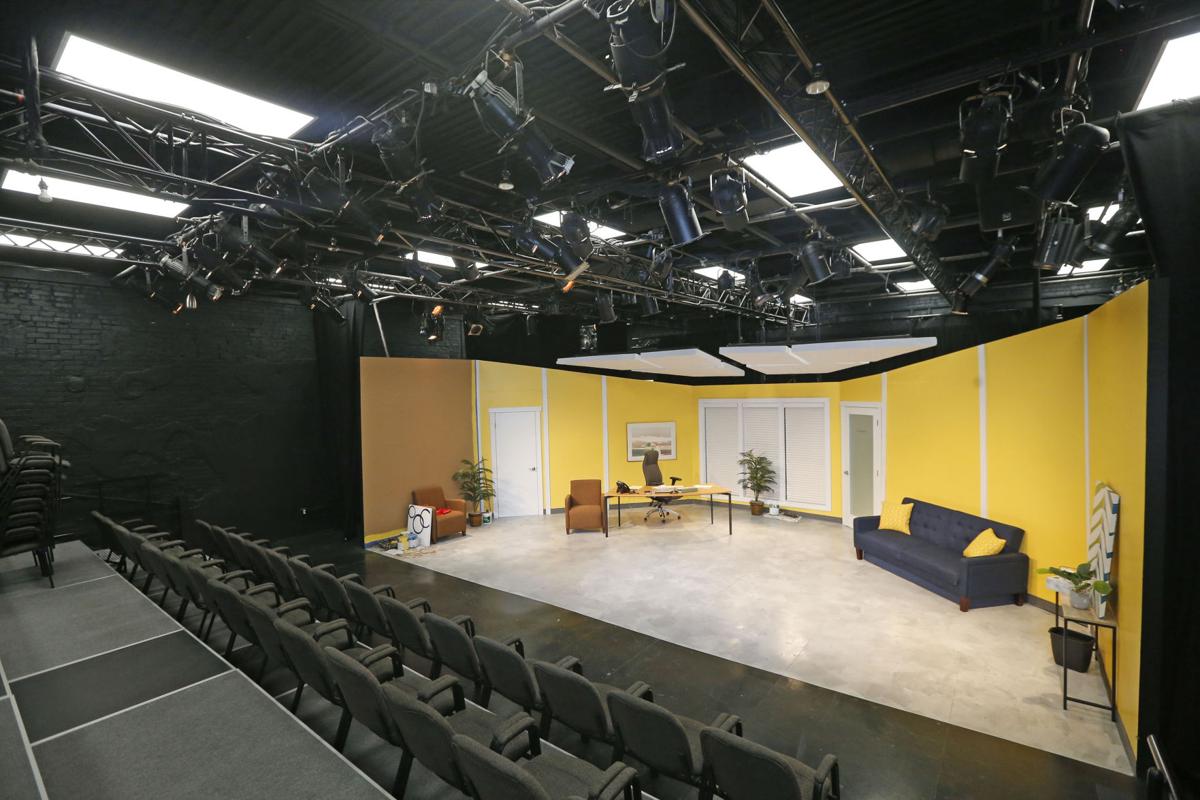 The colorful set is ready for "Speed the Plow," the first production in the new home of Road Less Traveled Theatre. (Robert Kirkham/Buffalo News) 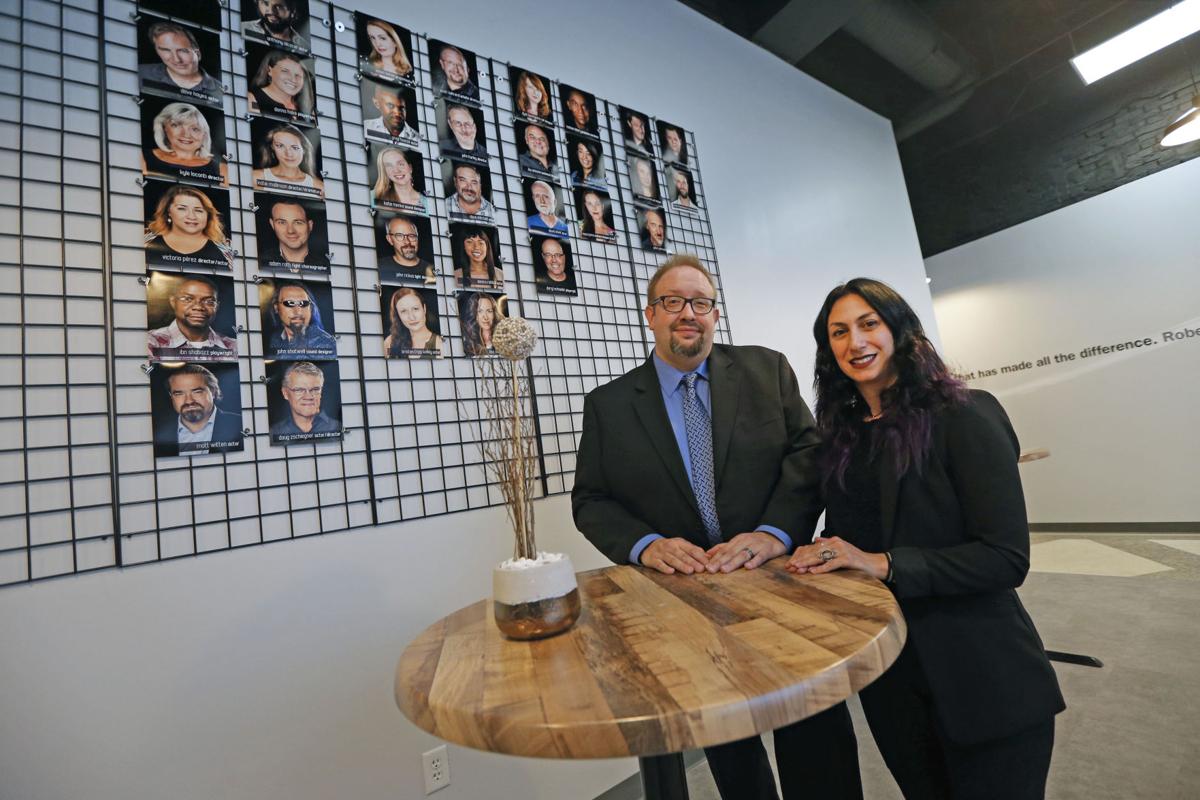 Road Less Traveled Theatre's Artistic/Executive Director Scott Behrend, and Managing Director Gina Gandolfo are surrounded by head-shots of the company's ensemble and board of directors in the lobby of the new home. (Robert Kirkham/Buffalo News)

The marquee is up, the bar is in, the seats are arranged and the stage is set for the debut of the new Road Less Traveled Theater. Again.

This time, founder Scott Behrend said, Road Less Traveled Productions could be settling in for keeps.

“We plan to stay here for a while, I hope at least until my daughter (she’s a toddler) finishes college,” Behrend joked as he prepared for the season opener, David Mamet's "Speed the Plow," which starts Oct. 26.

It isn't just stability that the new location at 456 Main St. offers. The former Baker Shoes location a few doors north of Lafayette Square is a step up for RLTP in other ways.

First, the 400 block of Main isn't on the development radar for demolition or dramatic reconstruction for, say, a convention center, so Behrend's little girl stands a good chance of celebrating her college graduation there.

Second, the property was vacant and essentially gutted when the company took it on, creating a blank slate for whatever Road Less Traveled wanted to do. For the first time, Behrend, who started in theater as a stage designer, was able to build exactly what he wanted from scratch.

And, unlike the company's first location in the Market Arcade Film & Arts Center, Road Less Traveled has its own name in lights on Main Street, and its own entrance.

Also, anyone who went to a show at RLTP's most recent location in the 500 block of Pearl Street will know about the intimidating flight of stairs that greeted theatergoers when they walked in the door. If someone needed an elevator, they had to use another entrance, which discharged passengers in a back corner, near the winding path that led to the women's restrooms.

There are no stairs at 456 Main, which is completely accessible. The new restrooms are right off the lobby, just a few steps from the full bar and entrance to the theater. Inside, guests will find the familiar seats and risers, which came from Pearl Street along with other fixtures and equipment.

The theater capacity will remain the same, at just under 100 people.

"We want to keep it at that," Behrend said. "That way we can continue to put on the kind of shows we want."

He said he expects to present five subscription shows at 456 Main each season, while offering "extras" up the street at Shea's 710 Main theater. Last year, RLTP put on "It's a Wonderful Life: A Live Radio Play" there for the holidays and this year will present "Miss Bennet: Christmas at Pemberley" in December.

The planned season opener "Hand to God," however, was bumped into 2019-20 when it became clear that the new theater would not be ready in time for Curtain Up! To his surprise, Behrend said, they received virtually no complaints about the switch. On the contrary, subscriptions are already up for the year, he said.

How Road Less Traveled got here – well-established, innovative, consistent and respected – is a story in itself.

"The last thing I actually wanted to do was start a theater company," Behrend said, 15 years after he did just that.

With an arts degree from Syracuse University, he returned home to Buffalo temporarily at the urging of his father and found work as a set designer for Irish Classical Theatre Company. That was going well, but what he really wanted to do was direct, to "have my fingers in all parts of the process."

His break came at New Phoenix Theatre, after he designed the set for the theater's production of Tennessee Williams' "Night of the Iguana."

"It was an amazing set, truly," recalled Richard Lambert, New Phoenix's artistic director and founder. "Scott created a multilevel Mexican resort that jutted out into the audience, framed with fabulous perspective and tropical plants."

Even then, he said, Behrend let it be known he would like to try directing.

"Being a somewhat savvy theater producer," Lambert said modestly, "I offered him the opportunity to direct in exchange for several design assignments."

That led to Behrend directing "Entertaining Mr. Sloan," by Joe Orton, which Lambert said elevated Behrend's status considerably, since he then went on to New York and was as an assistant director for the Roundabout Theater Company‘s production of the same play, starring Alec Baldwin. Baldwin and Behrend have been friends ever since.

From there, Behrend began producing his own shows and in 2003 he founded Road Less Traveled, so he could direct the kinds of shows he really wanted to see, and to encourage local playwrights who were waiting for a chance, like he had been.

"In 15 years we have presented 28 world premieres, which is kind of insane," Behrend said. The company is slowing down the process now, he said, and spending more time with writers developing works before putting them before an audience. He expects that most seasons will still include at least one premiere.

Alan Pergament believes now is a good time to explain what goes on in these programming decisions.

Why didn't Nev Schulman win 'Dancing with the Stars'?

Schulman was the best. But “DWTS” doesn’t just reward that; it factors in popularity.

For those who enjoy a live tree at Christmastime, visiting a local tree farm or nursery for cut-your-own or precut trees can be a fun family o…

Visit a local theater for something to do that is different than going out to dinner. (Robert Kirkham/Buffalo News)

The colorful set is ready for "Speed the Plow," the first production in the new home of Road Less Traveled Theatre. (Robert Kirkham/Buffalo News)

Road Less Traveled Theatre's Artistic/Executive Director Scott Behrend, and Managing Director Gina Gandolfo are surrounded by head-shots of the company's ensemble and board of directors in the lobby of the new home. (Robert Kirkham/Buffalo News)