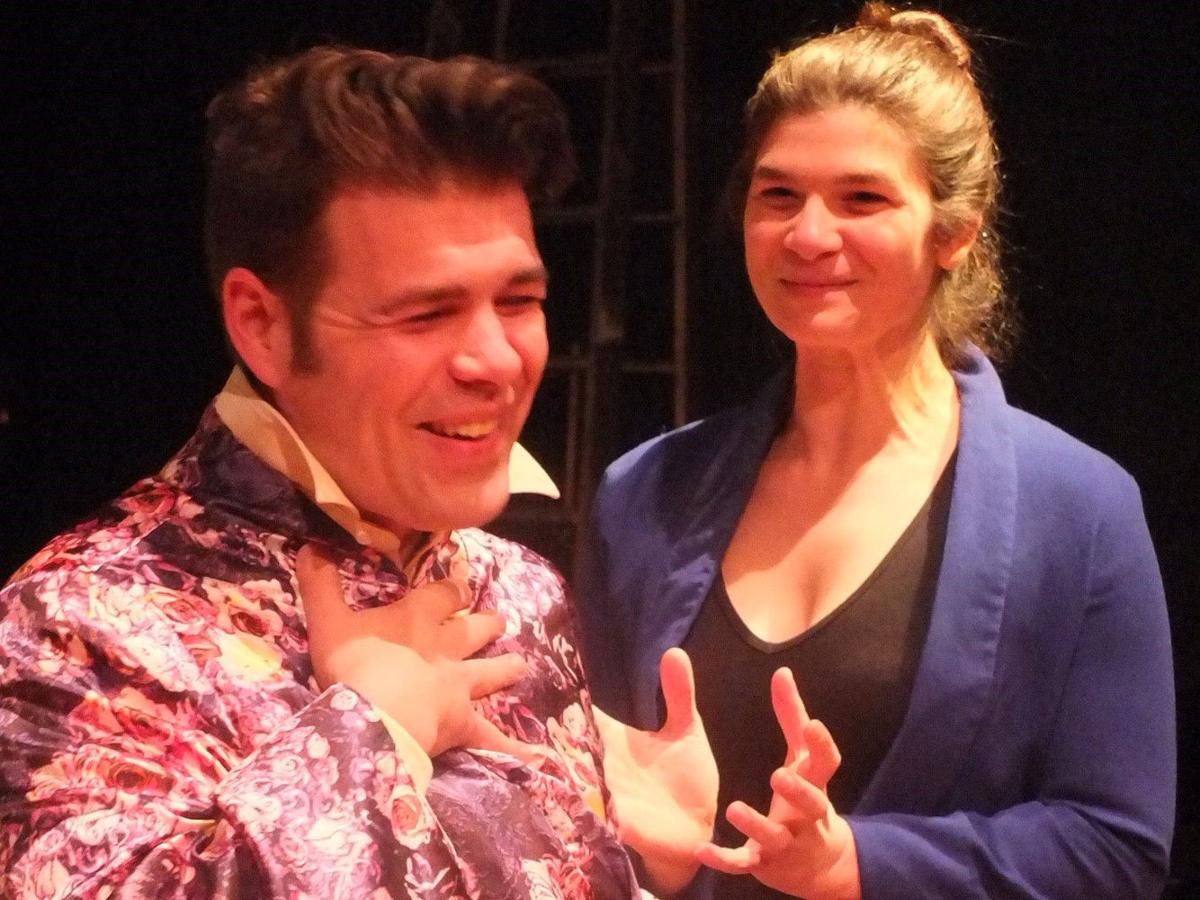 Eric Mowery and Marie Costa star in "The Life and Death of King John" at New Phoenix Theatre. Costa is a standout in her two roles. (Photo courtesy Lawrence Roswell) 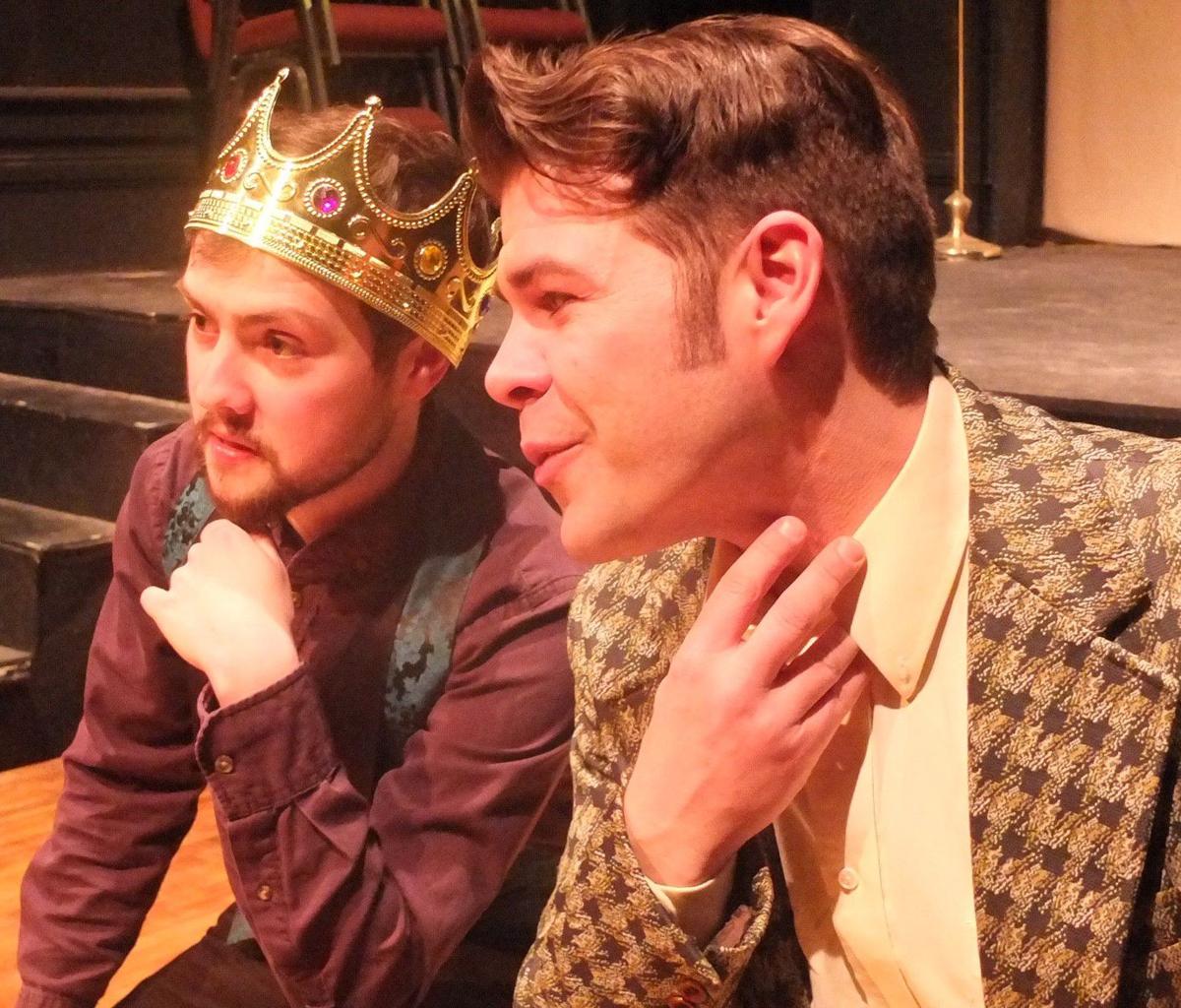 “The Life and Death of King John” is one of William Shakespeare’s least frequently produced plays. The play’s unpopularity may be due to the fact that it ignores the two things John is best known for—being the bad king in Robin Hood stories, and the tyrant forced to sign Magna Carta. “King John” is also not well served by its subject matter being disconnected by almost two centuries from Shakespeare’s popular English history plays.

Director Lawrence Gregory Smith’s delightful and dynamic adaptation of “The Life and Death of King John” at the New Phoenix Theatre should encourage more troupes to take up this rich and rewarding play. Brimming with audacious, enthusiastic performances, and intriguingly staged in an absurdist atmosphere pulsing with be-bop jazz and whimsical props, Smith’s “King John” offers a fun and well-informed rendition of Shakespeare’s strangely engaging play.

Using surreal effects and costumes on its sparse stage, Smith’s “King John” succeeds because it couples its farcical energy with a script that features Shakespeare’s stirring Elizabethan verse. Although the play opens with its actors breaking the fourth wall and chatting about medieval movies while they describe their characters (whose names and relationships are conveniently located on a nearby chart), the play remains otherwise true to Shakespeare’s original language.

This is a highly theatrical version of the play, in which the very ridiculousness of the staging and props (such as puppet armies or gaudy crowns) amplifies, rather than distracts from, Shakespeare’s poetry. A particularly powerful example of such effective absurdity is the melancholy puppet used to portray the doomed Arthur of Brittany (voiced by Gianna Palermo).

While staying true to the Bard’s words, Smith’s version adapts two other tricks of Renaissance theater—the assignment of multiple roles to each actor, and the crossing of gender lines. Sarielys Matos is every bit as excellent playing the scheming and imperious Queen Eleanor as the fiery Cardinal Pandulph. The playing of multiple roles is sometimes done to absurd effect, as when Jane Dewey plays both Blanche and the Dauphin: wearing a two-sided coat that allows her to turn to one side to show she is switching characters, Dewey hilariously ends up wooing and marrying herself.

While the actors all perform well, two performances stand out. Connor Caso is excellent as King John, providing a consistently engaging performance in which he looks every inch a king. With an expressive face whose flashes of glee, discomfort and sadness help us register what is going on in the complicated play, Caso successfully presents a king who possesses regal style along with his more unsavory qualities.

The brightest star of the show is Marie Costa, who offers scintillating performances as “the Bastard” and as Constance. Introduced as Philip, a would-be heir whose status as Richard I’s illegitimate son leads to him being knighted as Geoffrey Plantagenet, the Bastard becomes the most energetic figure on the stage. Displaying both bravado and intelligence, Costa thrills us through her perfectly fluent delivery of lines, her intimate exchanges with the audience, and her menacing wielding of what looks like a giant chef’s knife. While perfectly conveying the Bastard’s development of wisdom and dignity, Costa is also terrific as Constance, who moves from verbal battles with Eleanor to later, visceral sorrow. Trembling and disheveled, eerily staring into the air as she invites Death to come and end her sorrow, Costa sublimely channels Constance’s overwhelming grief concerning her young son.

“The Life and Death of King John”

Through March 23 at the New Phoenix Theatre on the Park, 95 Johnson Park. Performances are at 8 p.m. Thursdays, Fridays and Saturdays. Tickets are $30 general, $20 for seniors and students. (box office, website).

Margolis, who left Western New York to work at a Fox affiliate in Detroit 35 years ago, announced on the air this week that she is retiring next week.

New 'Perry Mason' is as good as TV gets

Wait a minute. Could this be Perry Mason?

Scott Levin out temporarily at WGRZ after emergency back surgery

With Levin’s emergency surgery only occurring a few days ago, it too early to know how Channel 2 will fill his important role opposite co-anchor Maryalice Demler.

Lorna Hill leaves behind her an already deeply shaken artistic community cut off by the pandemic from its ability to engage with the public through traditional avenues of in-person performance and discourse.

But she also leaves behind a legacy that demands fulfillment.

WBBZ-TV is looking for a new home this fall

Unless there is a last-minute change of heart, it looks like the Flintstones, Andy Griffith, Gomer Pyle, Carol Burnett and Perry Mason will soon be on the move.

From WGR to WGRZ: Paul Hamilton lands a new job in local TV

It didn’t take long for former WGR-AM reporter Paul Hamilton to find a new team after he was released by Entercom Buffalo on Tuesday.

Omar Fetouh, a Buffalo native with a distinctive voice, had been with the station in a variety of roles for what the station said was 18 years. Chris Caya had been there 15 years.

Eric Mowery and Marie Costa star in "The Life and Death of King John" at New Phoenix Theatre. Costa is a standout in her two roles. (Photo courtesy Lawrence Roswell)