Subscribe for $1
Read Today's E-Edition
Share This
Taste of Country returns to Buffalo with songs, stars and stripes
0 Comments
Share this
Support this work for $1 a month
By Nancy J. Parisi Special to The News

Taste of Country roared back into Sahlen Field Friday night after a two-year hiatus, once again transforming the baseball stadium into an exuberant party space for 20,000 fans and a sleek showcase of five musical acts. The sold-out event, produced by Country 106.5 WYRK, began for some in early afternoon with down-home tailgating at nearby parking lots.

Headlining was mega-star Tim McGraw, with Billy Currington, Walker Hayes, Thompson Square and WYRK Rising Stars OsbornNash (local Liz Osborn and Bob Campbell-Nash) rounding out the bill. The national anthem was sung by local duet Fuzzy and Amanda – of Fuzzy & the Rustbelts – who were WYRK's 2020 Rising Stars. An Air Force jet flyover then zoomed overhead, and a moment of silence was held for recent tragic events in both Buffalo and Uvalde, Texas.

"We're back at the ballpark," said WYRK DJ Rob Banks, "and it feels so good." He told those in attendance (the venue would be at its full capacity when Walker Hayes' set was in full swing) that hashtag #toctidyup was in effect, a contest for tailgaters to snap photos of tidied-up parking lot parties for a chance to win tickets to ToC 2023.

OsbornNash hit the stage with originals and covers, the unabashed country tradition of paying homage to musical forebears. Little Big Town's "Little White Church" blended with tits own, kazoo-driven "Day Break" (the duo has plastic kazoo giveaways with the song title printed on them). They worked the barricade later for selfies and autographs during Currington's set, signing the cowgirl hat of Kim Coles of Lockport that was nearly covered – her own wearable hall of fame.

About playing ToC, Osborn said, "It was surreal, and it all happened really fast."

Also in proximity to the stage, standing in the bed of a Toyota Tundra tricked out in red, white and blue, were Kayla Wagner and Fred Kintzel. The couple won a WYRK contest and watched the show from the elevated vantage point. Residing in Elma, they'll be married in East Aurora on July 23 (announced mid-concert) – occasionally images of them enjoying the night were projected on the Jumbotron.

Married couple Keifer and Shawna Thompson, aka Thompson Square, hit the stage as dark gray clouds lurked overhead before sunshine won out, with Shawna asking the crowd, "Do we have any singers here tonight?," before Mellencamp's classic "Hurts So Good." Keifer said, "It's great to see all these Americans in one place, it's been a long time coming" before their rabble-rouser "Trans Am," into contemplative "Up In Smoke" and then new release "Country In My Soul." They finished with a sing-along to Steve Miller Band's "The Joker" and their excellent "Are You Gonna Kiss Me or Not."

Long and lean Hayes emerged wearing a Bisons jersey, announcing that it was "time to party" – preaching to the converted. Set highlights were "Country Stuff," "You Broke Up with Me" and "AA," with its refrain, "I'm just tryna keep my daughters off the pole, And my sons out of jail." He performed soulful, autobiographical "Craig," telling of finding salvation and finished with his 2021 hit "Fancy Like" with his family members joining him onstage to do the accompanying bouncy dance.

Currington and band rocked hard, performing "Pretty Good at Drinkin' Beer," "Do I Make You Wanna" and "That's How Country Boys Roll" amid covers of 1950's rockabilly Eddie Cochran hit "Summertime Blues" and Kenny Rogers' "The Gambler." A showcase for keys and slide guitar, "Must Be Doin' Somethin' Right," ran into "We Are Tonight," the closer, with Currington shouting, "Thank you, I had a great time."

Tim McGraw, reverently mentioned by the other ToC artists throughout the night, hit the stage after a musical overture following walk-out song "Rock and Roll," by Led Zeppelin, played in entirety.

After "How Bad Do You Want It," he said, "I'm Tim, better known as Faith's husband."

The set of 17 songs included a visit to the stage by former Bills QB Jim Kelly (after "Truck Yeah"), who tossed out the famed Marv Levy quote, "Where would you rather be than right here, right now?" McGraw waved a Bills flag handed up from a fan before "I Like It, I Love It" and closed with  "Live Like You Were Dying."

McGraw's trio of encore songs featured finale "Humble and Kind," dedicated to the City of Buffalo.

Bestselling bands of the ’80s, then and now

Billboard charts from the 1980s were scoured for this list of 25 bands whose music was the soundtrack of the decade. Take a look at them then and now.

The longest-running Billboard No. 1 singles from the 1960s

Here's a look at the songs that spent the most weeks at the top of the charts between 1960-1969, according to the Billboard Hot 100 archives.

As DJ Diesel, Shaq drops the bass on Buffalo

"Shaq’s Bass All Stars is about taking over the best venues in big cities and small cities around the country and giving up-and-coming producers a stage and platform to make a name for themselves," O'Neal said.

This Week in Live Music: Garbage, Willie Nile and 'A Night of Latin Fusion'

Here’s a few of the more enticing live music events on offer in the clubs and concert halls this week, according to News Music Critic Jeff Miers.

Iconic one-hit wonders from the past 50-plus years

In celebration of the beloved “one and done” artists of the world, here's a look at some of the most iconic one-hit wonders of the past 50-plus years.

Nathaniel Rateliff and his backing band The Night Sweats, are returning to Western New York for a show at 6 p.m. June 28 at Lewiston’s Artpark Amphitheater. Last year, the rustic R&B flagbearers released their third LP "The Future," which not only marked their first group effort since Rateliff released a solo record in 2020, it's also the band’s first recording since the passing of beloved record producer/multi-instrumentalist Richard Swift.

Beyoncé released her new single and it's safe to say "Break My Soul" did its part to break the internet. Listen here.

Demand for record albums continues to soar in the United States, and the manufacturing base is having to reinvent itself to meet demand.

Was there anything real about Elvis Presley?

Presley never wrote a memoir. Nor did he keep a diary. His music could have been a window into his inner life, but he didn’t even write his songs.

Eight songs you need on your 4th of July playlist

Eight songs you need on your 4th of July playlist 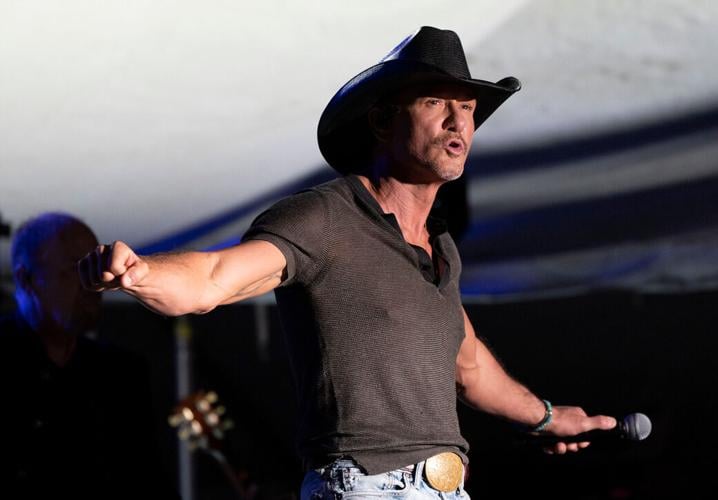