If Buffalo Bills management was looking for a way to streamline demolition of Highmark Stadium, it seems they were on the right track this week when Mötley Crüe and Def Leppard rolled into town and set the charge on Wednesday so that Metallica could come in and knock the house down Thursday night.

Fans filled the parking lots early and took their time moving toward the gates, keeping the tailgate going just a little longer while they listened to Metallica songs they hoped they would hear, at volumes that a mere car stereo could never reach. Once in the gate they jammed the concourse looking to get their latest tour T-shirt – including special Buffalo T-shirts made because this was only one of two U.S. stadium concerts this summer for Metallica – and a refreshment or two. Long lines deterred some from both.

The stadium erupted when savvy fans knew that hearing “It’s a Long Way to the Top (If You Wanna Rock and Roll)" by AC/DC followed by “Ecstasy of Gold,” by Ennio Morricone, now popular as part of a Modelo ad campaign, meant the band would soon be emerging. (The music, long the traditional concert opening for Metallica, was played against scenes from the film it was written for, "The Good, the Bad and the Ugly," on the four giant screens at the rear of the stage.)

The massive stage that stretched from nearly sideline to sideline had two walkways to a smaller stage in the midst of the crowd where the band opened the show by tearing into “Whiplash” from the "Kill ‘Em All" album. Although the crowd seemed slow to really get into the show, by the time the band had retreated to the more conventional setup at the back of the stage and moved on to "Enter Sandman” as its third song, hands were in the air and cellphone cameras were on record.

"You're probably thinking 'they played the good song, what's next?' " singer and guitarist James Hetfield said after playing what is arguably the band's biggest song. The answer was a fist-pumping rendition of "Ride the Lightning."

The stage setup showed that the band understands the sheer size of a stadium show. Giant crystal-clear video screens projected larger-than-life versions of each musician, images of disaster, animations and even the crowd as they sang along. Microphones were strategically placed at the front and sides of the stage so that Hetfield could direct his focus to every corner of the stadium. The additional runways at the front of the stage gave guitarist Kirk Hammett and bassist Robert Trujillo plenty of room to run. Drummer Lars Ulrich's massive drum kit was at the back center stage, but a smaller one also appeared on the smaller stage to give him the chance to get closer to fans, too.

The two-hour set gave the diehard fans what they were begging for and skewed toward the band's early catalog with songs like “Sad but True” and “Fade to Black.” At one point before a performance of “Dirty Window,” off the 2003 release "St. Anger," Hetfield tried his best to convince the crowd that the album wasn’t so bad, and by the end of song he had made a convincing argument.

What is a Metallica concert without pyrotechnics, you ask? Well luckily the crowd did not have to find out as flames surged from the top of the stage and perimeter seats lighting up the entire venue during “For Whom the Bell Tolls” and "The Moth Into Flame."

If anyone thought that pyrotechnics were not enough spectacle for a Metallica show, they were not disappointed when fireworks also shot off during the encore that offered fan favorites “Blackened,” “One” and “Master of Puppets.”

Following the encore, the band stuck around on stage to revel in fans adulation and shower it right back on them. There may not have been any confetti at the end of the show, but the sheer number of guitar picks and drumsticks that the musicians tossed out to the eager fans showered down in a similar fashion. Each band member took a minute at the microphone to address the crowd in their own unique way. Ulrich noted it was the third time the band played that stadium and promised they would be back in a way that seemed to imply it might be soon.

Ice Nine Kills from Boston with local Patrick Galante behind the drum kit opened the show and brought their blend of metal, punk and hardcore to the stage, welcoming the masses to Horrorwood. Blazing through a quick 40-minute set, they gave the crowd a good look at what the future of the genre has to offer.

After a brief break, Greta Van Fleet stepped out to greet the slowly building crowd and served up its brand of progressive rock that bears a striking resemblance to Led Zeppelin. Lead singer Josh Kiszka’s gold-sequined jumpsuit caught the light as the sun began to drop in the sky. Whether it was that blinding sun or the sheer size of the stage, the band struggled a bit to be a commanding presence in a venue of this size. Luckily, as the sun settled behind the walls of the stadium and they transitioned into “Highway Tune,” they had won over crowd.

Time to prep for 2 days of hell-raising (and hair-spraying) rock at Highmark with Metallica, Def Leppard, more

Over 48 hours, Abbott Road will be turned up to 11 – while turning the clock back a few decades. Here’s a primer for those attending each or both shows.

Stadium concerts are big events – and big money, especially for the stars

A financial study commissioned by Pegula Sports and Entertainment detailed the revenues from concerts held between 2015 and 2019, directly following a 2014 renovation to the stadium. 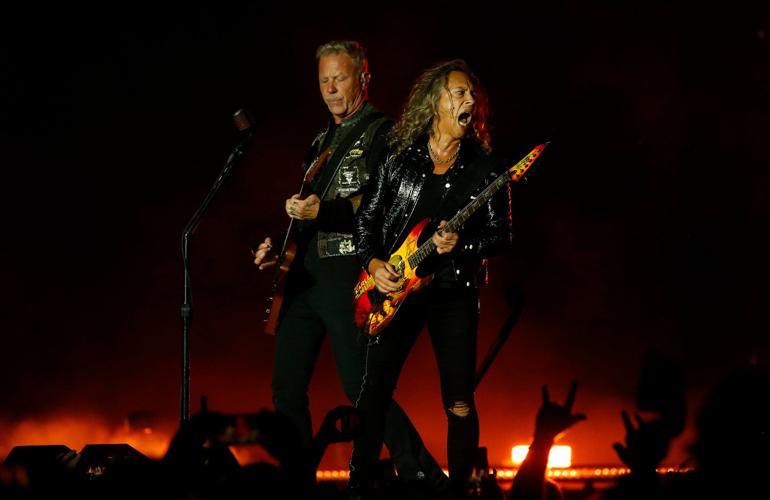 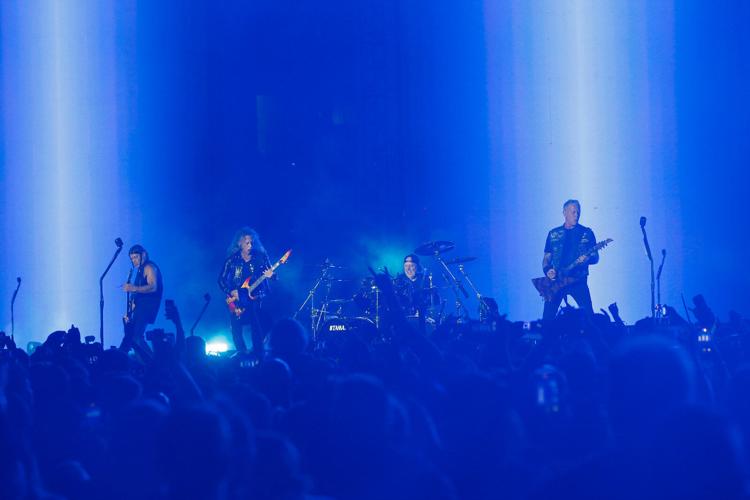 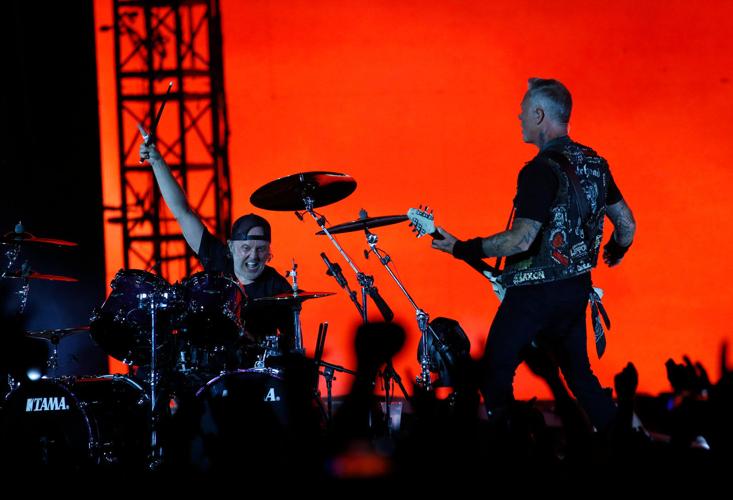 Drummer Lars Ulrich and guitarist James Hetfield play off of each other during the Metallica concert at Highmark Stadium. 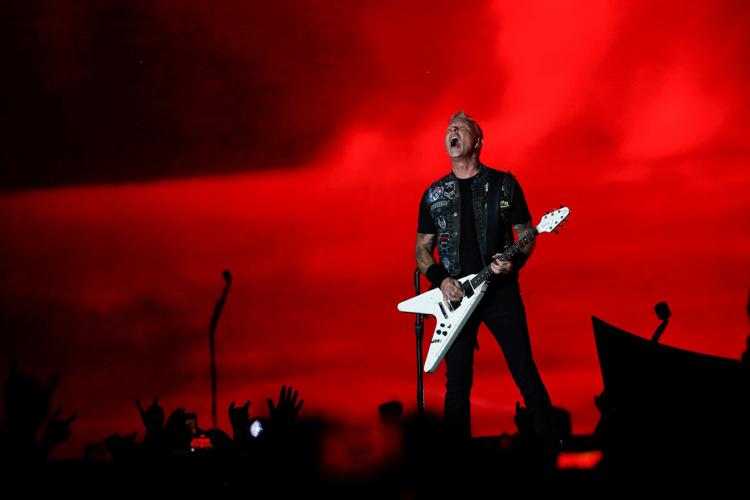 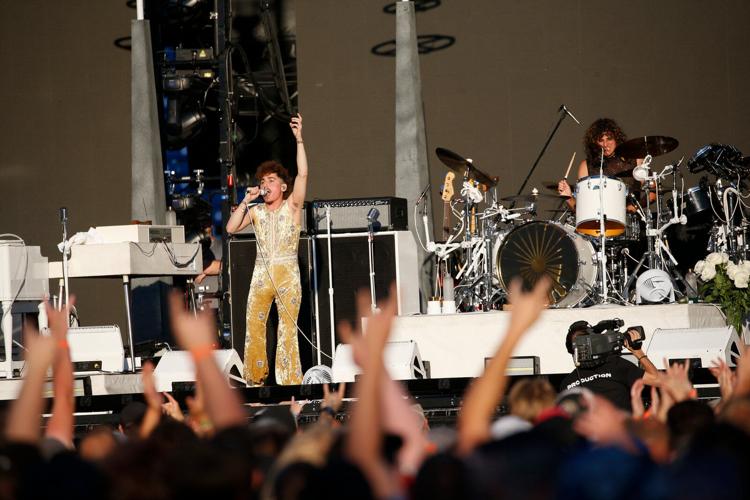 The band Greta Van Fleet with Josh Kiszka, left, and Danny Wagner, was one of the opening acts for Metallica at Highmark Stadium. 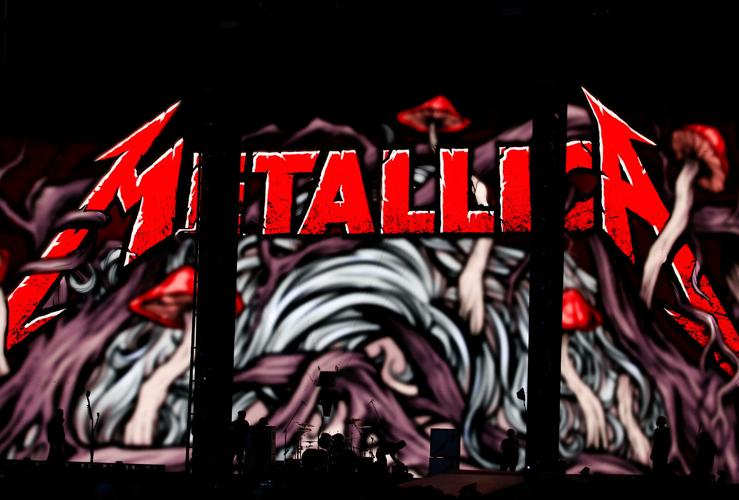 The massive Metallica logo on the four screens at the back of the stage dwarfs Lars Ulrich's drum kit.