For home game entertainment, the Sabres commit to ‘keeping it local’
0 comments
Share this
Support this work for $1 a month
Jeff Miers

Two of the brightest young stars in Buffalo took to the ice when the Buffalo Sabres opened the 2021-22 season against the Montreal Canadiens at KeyBank Center.

Though they weren't on skates, Megan Brown and Grace Lougen's soulful, elegant electric guitar-and-voice arrangement of the national anthem signaled something was afoot in Sabres-land and it is something exciting for the team and the regional music scene.

Not only did the pair – half of the alt-rock outfit Grosh – perform the anthem before the game, but another local music act called the Plagiarists also entertained the crowd with music during intermission on a new stage built in Section 121.

“Playing in-game for the Sabres has been a fantastic experience for us,” said Andrew Meyer, guitarist/vocalist with the Plagiarists.

“We were the first band to play at the home opener and we also played on Nov. 12. Despite what the attendance numbers may say, the energy in the arena has been awesome. The crowd seems very receptive to the live music element of games and we’ve had a lot fun being part of this new venture for the Sabres. Hopefully the fans appreciate the team’s willingness to try new things. We definitely do.”

This season marks perhaps the most serious commitment the Sabres organization has yet made to keeping it local when it comes to pregame and intermission entertainment.

The stage is set

Frank Cravotta, executive vice president of Creative Services for Pegula Sports & Entertainment, said the team looked at all aspects of game presentation over the summer, and "invited a lot of people from within the company to make suggestions.”

“Music is a tough one, always," Cravotta said. "If you’re coming to a concert, you probably have a genre of music that you’re expecting. We don’t have that luxury. So we looked closely at the music we’re playing. You need to have the right song, and you need to start it at the right time, so you don’t lose that energy."

Around the same time, Alden native Travis Fuller was named the new game presentation manager for the team after time as assistant director for game day experience at Towson State University where he "did some really cool stuff with their local music scene," Cravotta said.

One of the first things the game presentation team initiated under Director of Game Presentation Kelsey Barrick was the building of that new stage in 121 as a showcase for local artists, who would provide the sole entertainment for fans during intermissions.

Investments in sound and lighting equipment were duly made. Barrick “used the contacts that she had, mostly from what we were doing with Party in the Plaza, and started to book bands for the season,” Cravotta said. Fuller is now carrying that work forward.

“Things have changed around here since I’ve been gone,” Fuller said. “It’s exciting to witness it. And it’s definitely good to be home.”

Fuller returned after eight years away with a fresh perspective on what has become an increasingly rich regional music scene over the past decade. There was no shortage of candidates to fill the season’s schedule, but games are attended by a broad cross-section of the population, reflecting a gamut of musical tastes. Did he seek the input of fans and patrons? Or did he see this as an enticing blank slate and an opportunity to experiment?

“It was a combination of both of those things,” Fuller said. “We booked some of the early gigs with bands we were already familiar with, and we asked some of them for their recommendations. That’s where we started. And then, after each game and each band’s performance, we evaluate how we think it went, and we listen to feedback from fans and within the organization, and we collaboratively come up with a consensus – how we think that particular genre went for that particular game, and how likely we are to book that band, or one like them, again.”

For the musicians, this new commitment to local music is a win, regardless of what happens on the ice. Those who have gotten the call so far this season see the opportunity as an honor and a chance to perform for a large crowd in an arena they’ve likely only previously attended as fans.

“It was an incredible experience for us, standing out on that ice and delivering such sacred songs,” Brown said. “I’ll never forget it. And I love seeing all the local artists get a shot at the games.”

The fans and the Sabres organization apparently loved it as well: Brown and Lougen will be back with their bandmates in Grosh for the March 7 game against the Panthers.

“The Sabres hit was amazing. We literally walked in with the players and it was all red carpet from there," he said.

“They make a huge deal about it to the crowd and for those seven-minute segments, you’re a straight star. It was all on the Jumbotron, we had our own in-ear monitors, and our own media producer attached at our hip. Man, there’s nothing like getting thousands of Sabres’ fans jumpin’ and bumpin on your say-so."

The excitement that the live music brings to the games has not been lost on the Sabres.

“Right away, we saw the energy that a live band brought to the intermission, and how much our fans seemed to be enjoying it, as opposed to some of the other things we’ve done in the past,” Cravotta said.

“We started out thinking we’d just do this once in a while, quite honestly. But we quickly pivoted to wanting to do it every night, for every home game.”

Goalie Dustin Tokarski delivered a career-high 45 saves, including 20 in the chaotic third period, to hold off the Penguins and secure a 2-1 win for the Sabres on Tuesday night.

They’re back, but for Buffalo's concert clubs, the struggle continues

After a summer that sparked some optimism in the live music industry, many concert clubs in Western New York entered the fall season with fully packed schedules and high hopes. 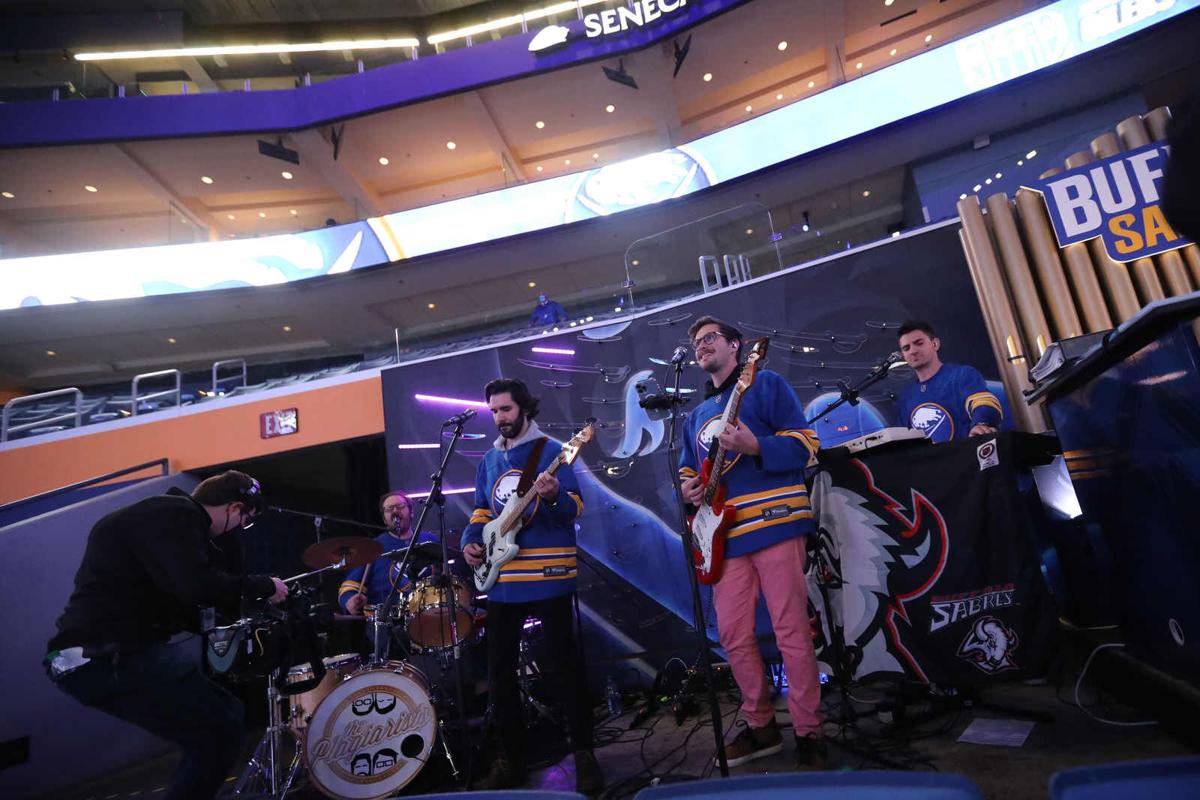 The Plagiarists perform at a Sabres game on Nov. 12 in the new stage area. Pictured are Bryan Sibbits on drums, Zack Weissman on bass, Andrew Meyer on guitar and Peter Blanford on keyboard. 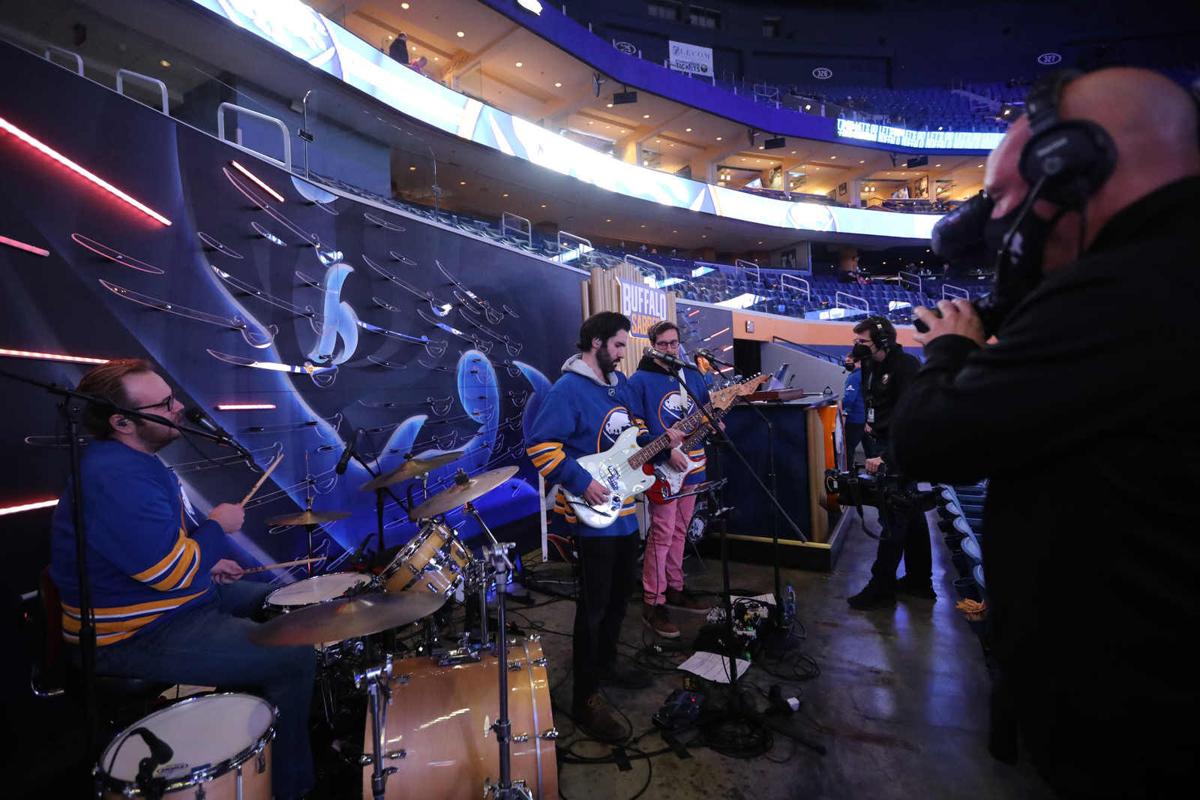 The Plagiarists, with Bryan Sibbits on drums, Zack Weissman on bass, Andrew Meyer on guitar and Peter Blanford on keyboard, perform before the Sabres game on Nov. 12. 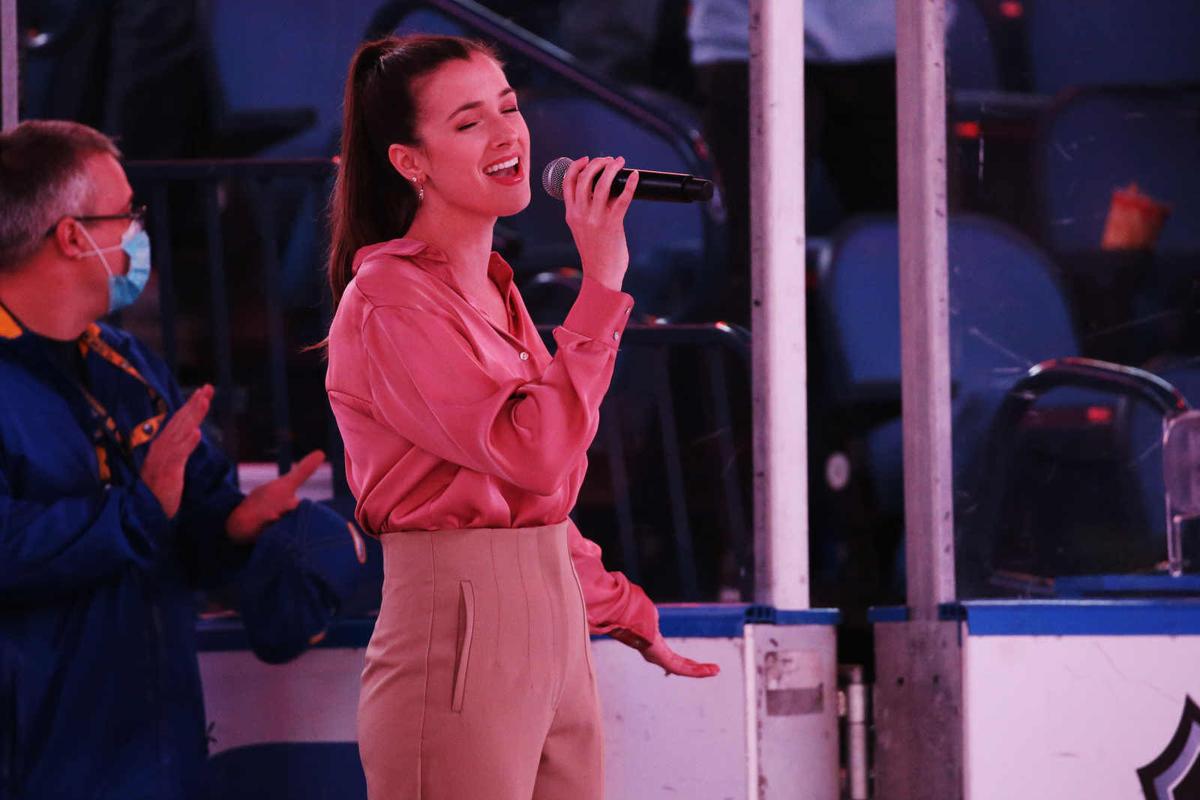 Buffalo singer Jennifer Campbell performs the national anthem before the Sabres game against the Edmonton Oilers at KeyBank Center on Nov. 12, 2021.