When John Rzeznik and Robby Takac started the Goo Goo Dolls 35 years ago, they quite likely never dreamed that decades later, they’d be headlining the largest concert venue in their hometown on a day that has now officially been declared “The Goo Goo Dolls Day” in Erie County. But that’s exactly what will happen on Saturday, as the band wraps the current leg of its tour with a 7:30 p.m. show at KeyBank Center.

“The Goo Goo Dolls are tremendous ambassadors for our community who proudly represent the Buffalo music scene on an international basis,” said Erie County Executive Mark Poloncarz in a press release announcing the honor. “They have always remained proud of being from Western New York and have never forgotten about us despite their worldwide recognition in the recording industry.” 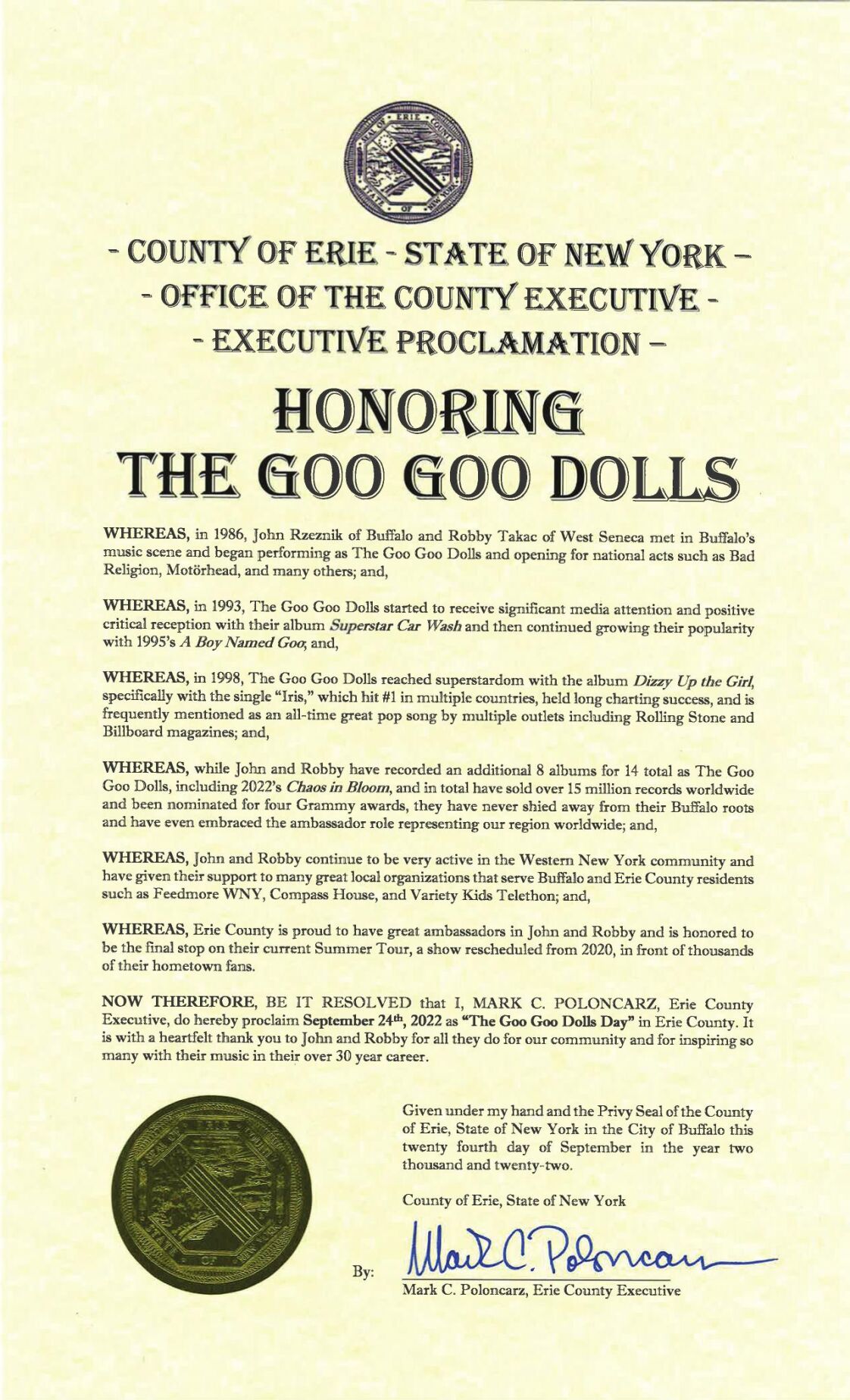 Poloncarz highlighted the band’s success, which includes some 15 million albums sold worldwide and multiple Grammy Award nominations, noting that, despite their massive commercial clout, Rzeznik and Takac “have never shied away from their Buffalo roots and have even embraced the ambassador role representing out region worldwide.” The official proclamation also praises the band’s work with such organizations as the Variety Kids Telethon, Compass House and Feedmore WNY.

“It is with a heartfelt thank you to John and Robby for all they do for our community and for inspiring so many with their music in their over 30 year career,” the proclamation concludes.

The proclamation will be presented to Rzeznik and Takac backstage, prior to Saturday’s show at KeyBank Center.

Remembering JJ Alfieri: ‘In a city of talkers, he was a doer’

Academy Award winner Irene Cara, best known for singing the theme songs for "Fame" and "Flashdance," has died in her Florida home.

Ah, SUNY Fredonia. The launching point for my own life in music, as it has been for so many others.

Here are a few of the more enticing live music events on offer in the clubs and concert halls this week.

Oscar, Golden Globe and two-time Grammy winning singer-actress Irene Cara, who starred in and sang the title cut from the 1980 hit movie “Fame” and then belted out the era-defining hit “Flashdance ... What a Feeling” from 1983′s “Flashdance,” has died. She was 63. Her publicist confirmed the death on Saturday. During her career, Cara had three Top 10 hits on the Billboard Hot 100, including “Breakdance,” “Fame” and “Flashdance ... What A Feeling." She first came to prominence among the young actors playing performing arts high schoolers in Alan Parker’s “Fame.” Three years later, she and the songwriting team of “Flashdance” accepted the Oscar for best original song.

Erik Brady: A friendship that started with a magazine article led to Gordon Lightfoot's ode to Buffalo

Gordon Lightfoot is Canada’s greatest singer-songwriter. And the balladeer who once tied one on in Buffalo now has ties to our fair city in song, Brady writes.

For Thanksgiving week, a bounty of parties, gift shows and family events

Besides the turkey, eggnog and pumpkin pie, there are plenty of holiday events around Buffalo this holiday week.

This week in live music: Lowest of the Low, Harvest Sum Fall Spectacular, the Commodores

Here are a few of the more enticing live music events on offer in the clubs and concert halls this week.

What's better than ringing in the New Year with the Goo Goo Dolls? Not having to pay for a ticket.

There’s no denying the truth – the holiday gift market is all about contemporary celebrations of popular music’s past triumphs. It’s nostalgia writ large, but for the serious music lover and collector, it’s a most delicious nostalgia.