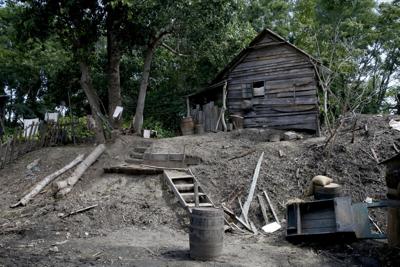 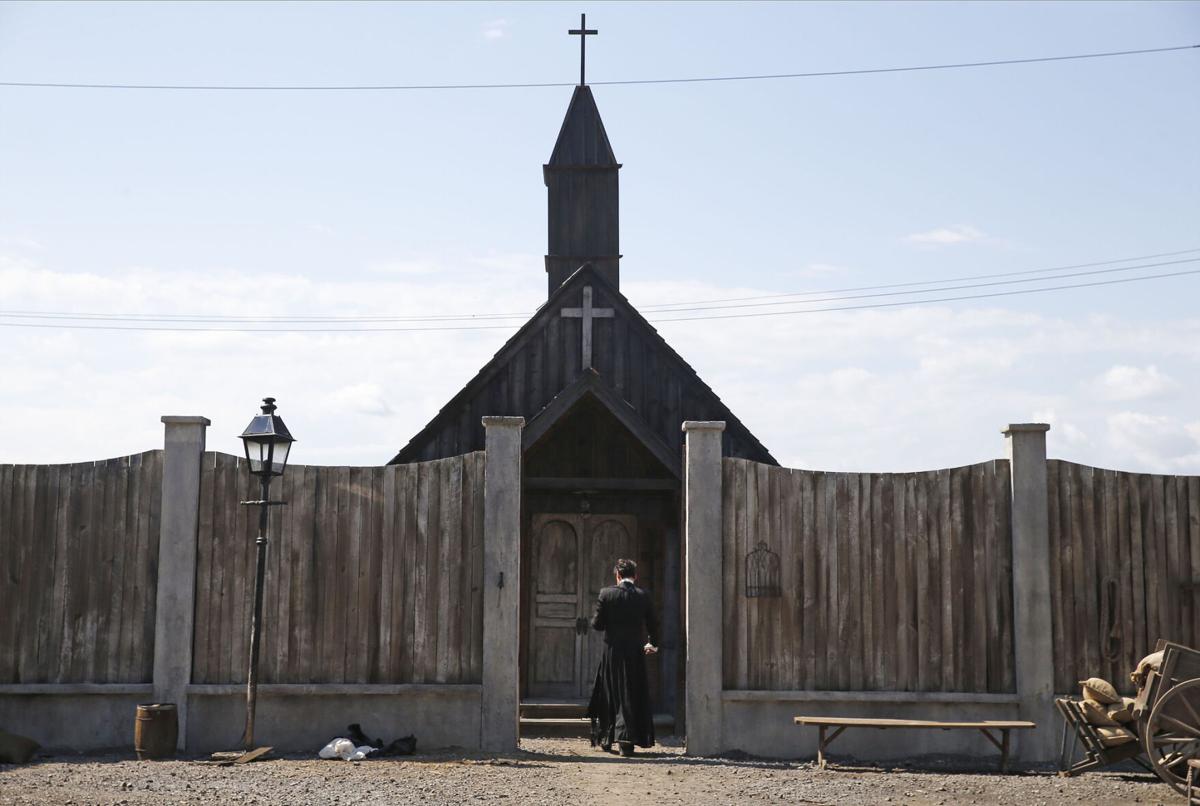 Actor Giampiero Judica, who plays Father Morelli in the "Untitled Cabrini" film, walks toward the church facade that was built as part of a backlot that encompasses three city blocks in South Buffalo. 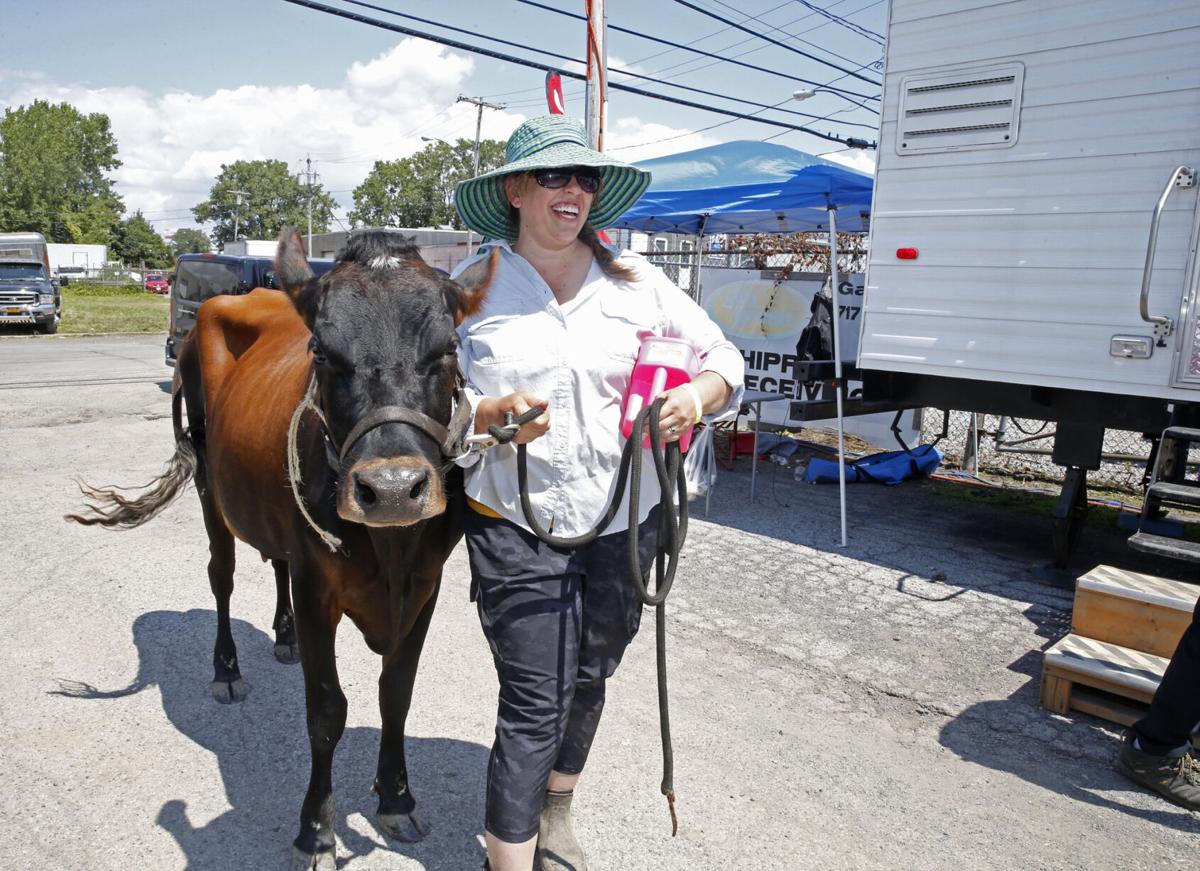 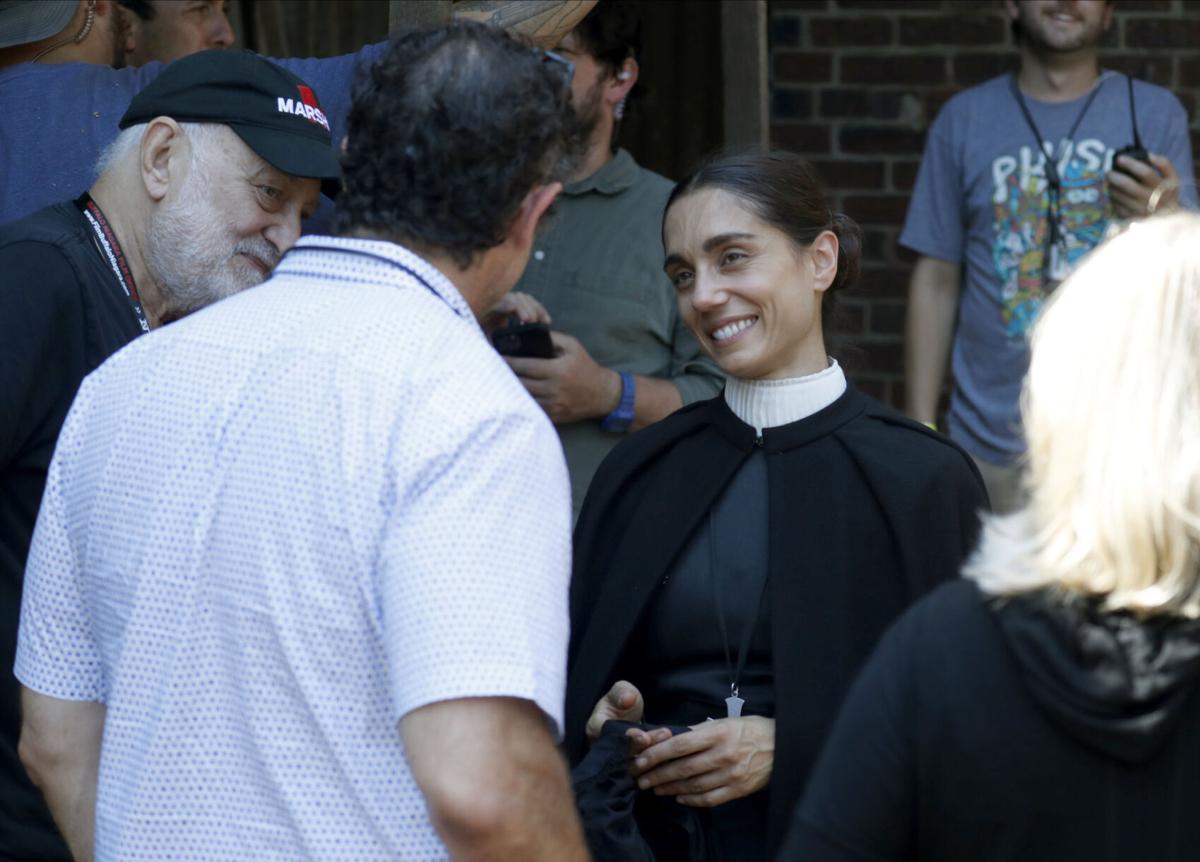 Cristiana Dell'Anna, who plays Francesca Cabrini, talks behind the scenes with members of the production, including producer Jonathan Sanger in the "Marshall" hat at left. 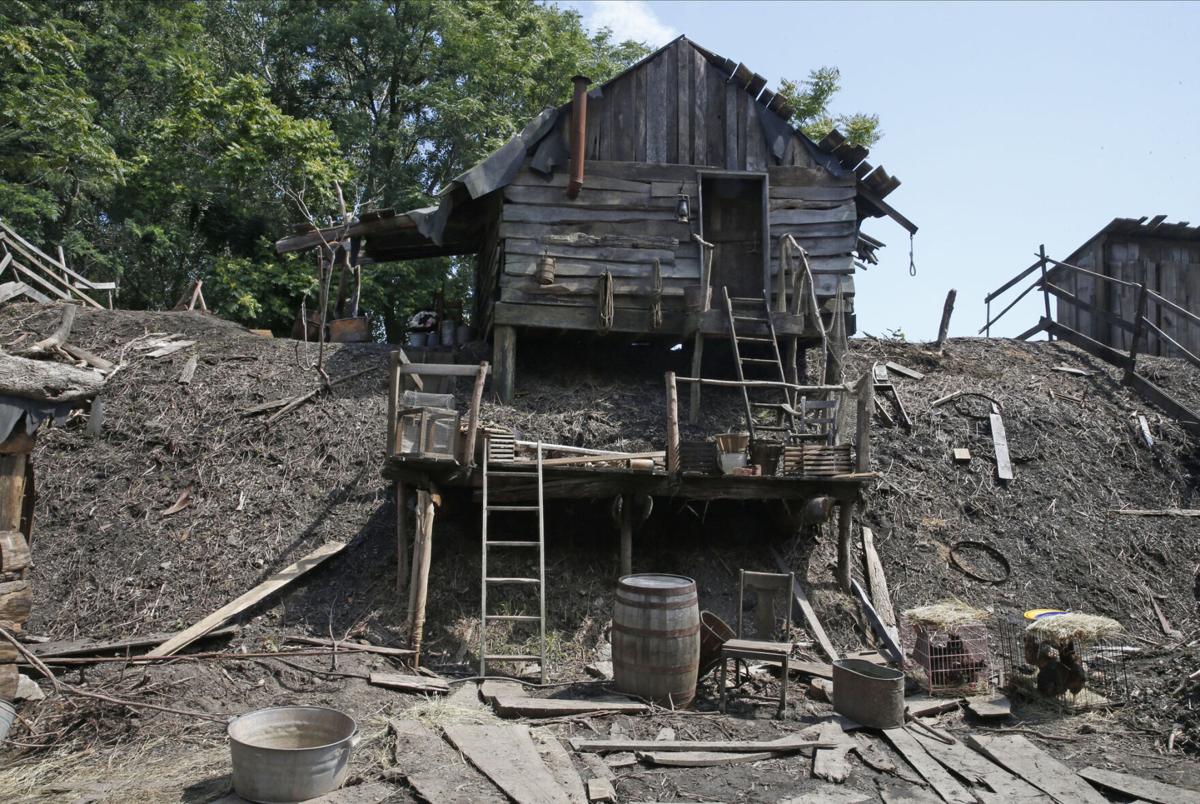 A 19th century street scene was created for the production of the "Untitled Cabrini" film being shot off Elk Street in Buffalo.

The small one-story building has seen better days – much better days. Yet even with exposed wood, peeling paint and a battered roof, it hardly draws a second glance as it blends into the background of a stretch of Elk Street in South Buffalo flanked by overgrown fields and some old industrial buildings and warehouses.

Its aged exterior makes it look like it's been there at least a half century, which is why it’s surprising to learn it was built only weeks ago as part of a Hollywood-styled backlot – a large set built to mimic locations without leaving the studio lot – for the “Untitled Cabrini” film that quietly started principal photography here July 16.

The movie, directed by Alejandro Monteverde, is the story of a poor Italian immigrant and nun named Francesca Cabrini who made it her life’s mission to help other immigrants. The international cast includes Cristiana Dell’Anna, Montserrat Espadalé, David Morse and John Lithgow. Production Designer Carlos Lagunas Hernar created the look for the entire film.

The size and scope of this Buffalo backlot – it covers three city blocks – could signal a new stage of the Buffalo movie industry that has been drawing filmmakers like Oscar-winner Guillermo del Toro here for the city’s architectural gems of the 1930s and '40s.

It turns out Buffalo can build period from the ground up, too.

“The construction and set design is bigger and more extensive than anything I’ve seen here,” Tim Clark, film commissioner of the Buffalo Niagara Film Office, said about the backlot sets. “A Quiet Place Part II,” he explained, often built sets from natural locations, while “Cabrini” needed to create streets and scenes with more intricate and detailed period work.

The backlot was built within a complex of brick warehouses that look abandoned from the road. It took about 16 painstaking weeks for carpenters to re-create the Five Points neighborhood in lower Manhattan that Mother Cabrini – who was canonized in 1946 – transformed from the slums to an area with schools, hospitals and orphanages after she arrived in the U.S. in 1889.

Initially, filmmakers planned to make the movie in New York City where the story was set. But the neighborhood they needed didn’t exist there anymore.

“The architectural splendor in Buffalo is amazing. There are multiple architectural styles that would work for any period,” Sanger said. “We found better locations in Buffalo for what we were looking for. We found that in old brick warehouses we could create streets that would look like poor New York City at the turn-of-the-century. We could also dress the area around the Ellicott Square Building to look uptown. So we have both ends of the spectrum enabling us to get a sense of what the period was like."

For the backlot area, two new buildings, 10 shacks and parts of a dozen other structures were created. An Italian hospital was built with repurposed wood beams from barns in the Southern Tier. Inside an original building – still in use to bag grass seed and rock salt depending on the season – are four interior sets including a ship's sleeping quarter. Historic photos used as reference are taped to walls inside the building where carpenters and painters are among those creating sets, furniture, buggies and other props.

The original building anchors two distinct sets, one on each side. One is a city street scene that includes a butcher shop, bakery, Italian grocer and apartments. The other is a shanty town where everything is brown and dilapidated despite being “new” in the film. Shacks overlooking the street on a small embankment were built over an old railroad bed. You can nearly smell the poverty with your eyes.

“This is the part of the film where people will say, ‘We didn’t know it was there,’ ” screenwriter Rod Barr said as he stood on the dirt street and took it all in. “It is part of the Five Points neighborhood you wouldn’t know existed. There’s a whole other aspect that was this shanty town.”

Behind Barr was a small fenced-in area with hay and animals where Lilly, a 3-year-old Jersey cow from Banner Farm in Perrysburg, was waiting to make her film debut. Brothers Michael and Samuel Caico, ages 8 and 10, stayed near Lilly and the baby goats as they awaited directions for their next scene, too.

Their mother, Rachel Jackson, was standing nearby watching them and smiling.

“They are having the times of their lives. Samuel always wanted to be an actor. Now it’s the only direction he’s going,” she laughed.

The Caico brothers are among nearly 600 local extras used in “Cabrini” – an astonishing number that rivals any area film production. Another strong number for Buffalo: The film has 300 local crew members.

The backlot was used for about three weeks of shooting; the production is now filming throughout Buffalo and small towns in Western New York into September when it briefly moves to Rome, Italy, to finish.

“I had such a good experience working in Buffalo before with ‘Marshall,’ that I knew we would get great cooperation here,” Sanger said. “The support we get here is incredible.”

A shoe shine station, made of marble and designed to look like it was from the 1890s, was taken from the set of the "Untitled Cabrini" film being shot in the city, according to a police report.

'This one was awesome!' Western New Yorkers thrill to 'A Quiet Place Part II'

Recognizing places such as Akron, Olcott, the Grand Island bridges and the former Bethlehem Steel plant made the suspense all the more thrilling for local audiences.

Actor Giampiero Judica, who plays Father Morelli in the "Untitled Cabrini" film, walks toward the church facade that was built as part of a backlot that encompasses three city blocks in South Buffalo. 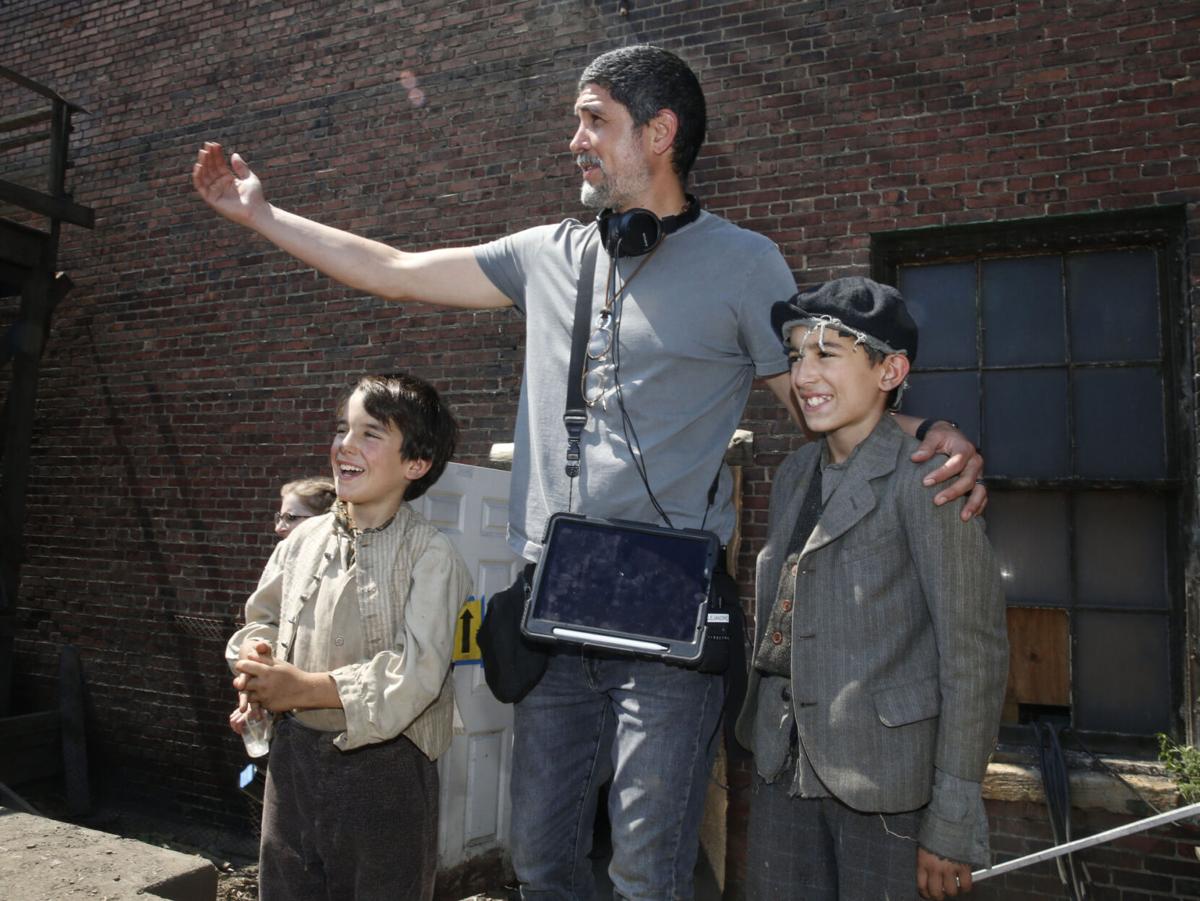 Director Alejandro Monteverde works with Michael Caico, 8, and his brother Samuel, 10, of Buffalo, on the set of the "Untitled Cabrini" film. 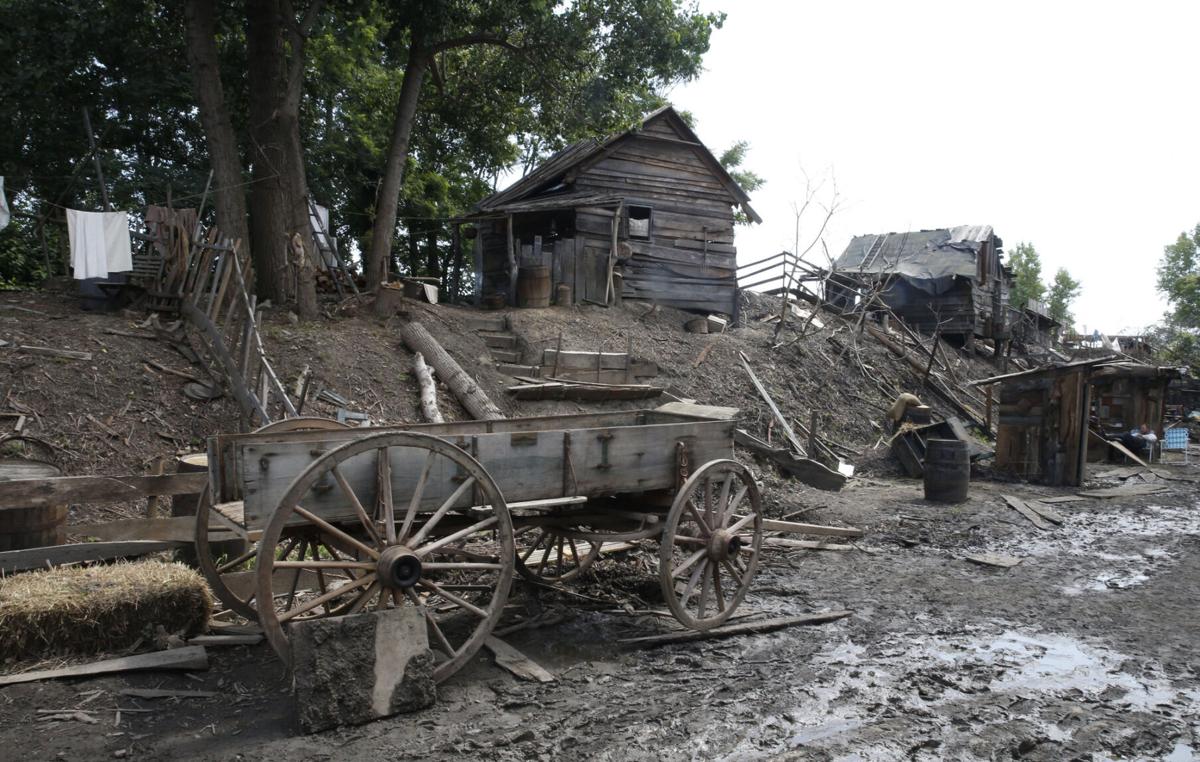 A 19th century shanty town was built on a backlot in South Buffalo for the "Untitled Cabrini" film. This picture shows shacks that were built over an old railroad bed. 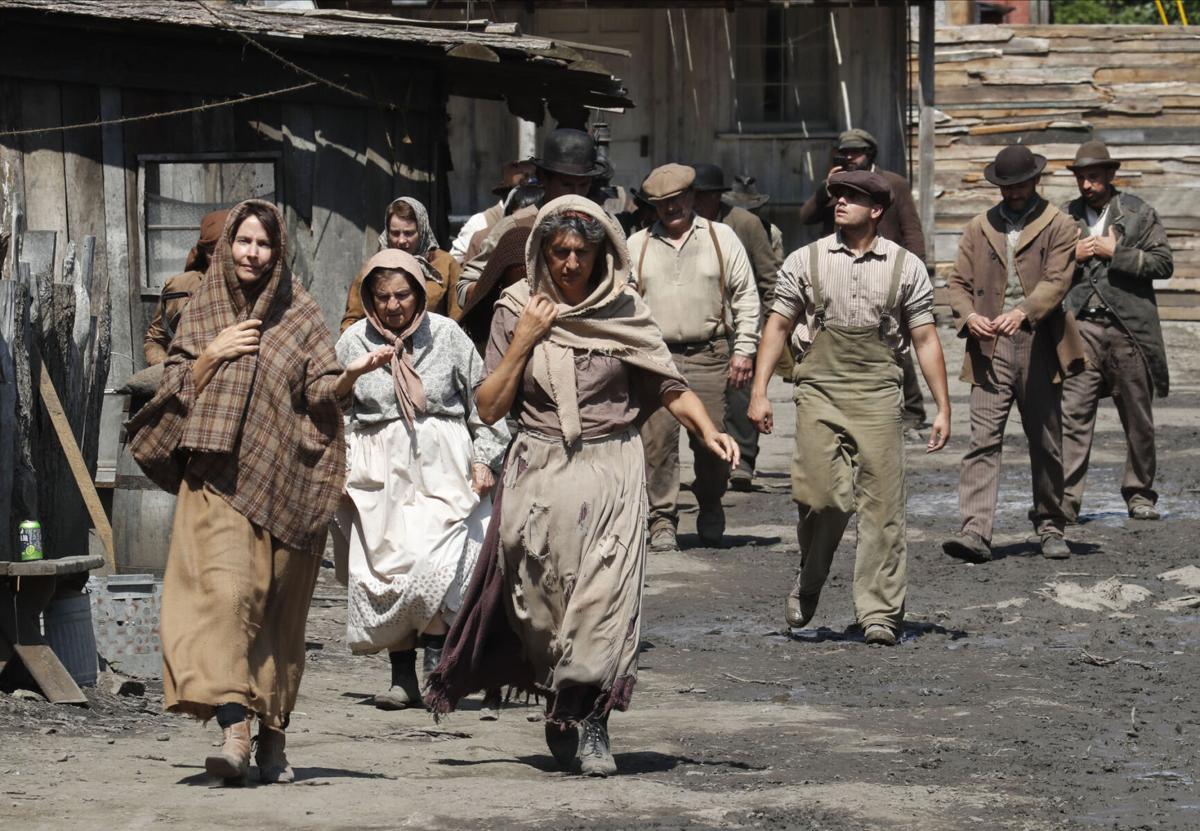 Local extras dressed as impoverished Italian immigrants in the late 19th century are seen on the shanty town set that is part of a large backlot created for the "Untitled Cabrini" film now filming in Buffalo. 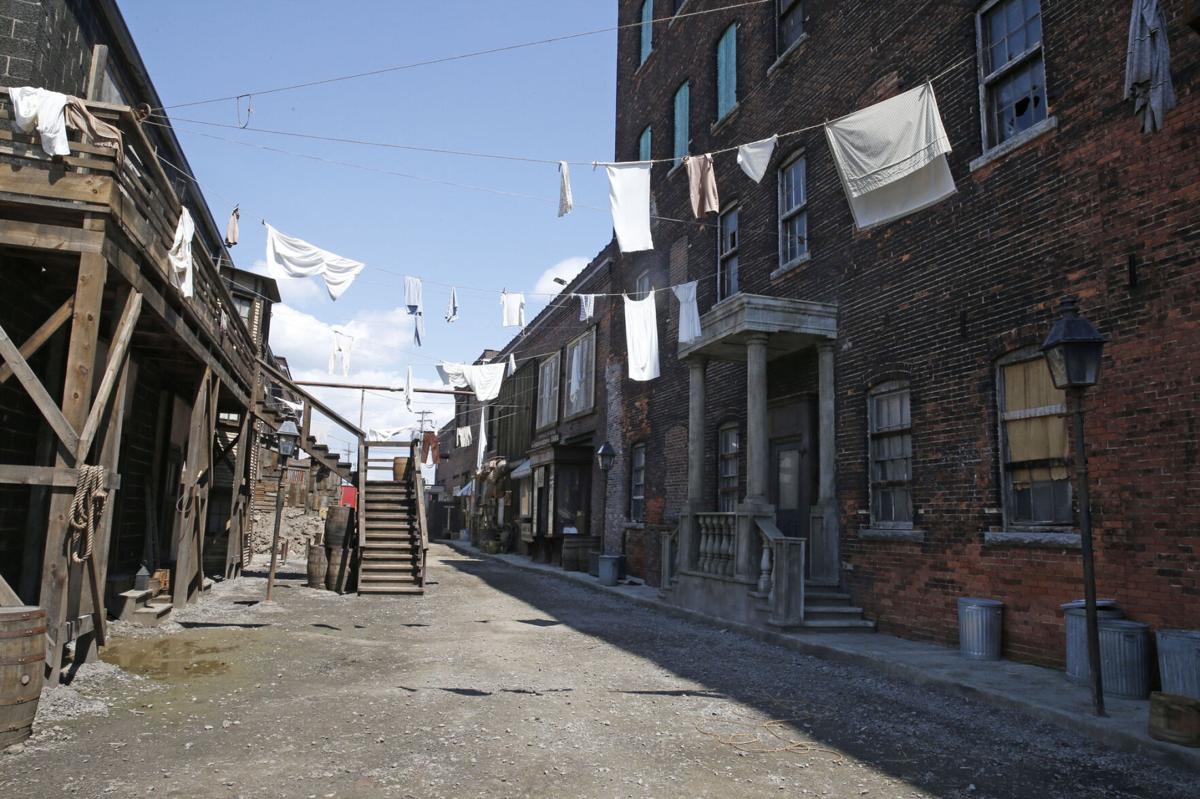 This 19th century street scene is a re-creation of the Five Points Neighborhood in New York City. It was built on a backlot built off Elk Street for the "Untitled Cabrini" film that is currently shooting in Buffalo.

Cristiana Dell'Anna, who plays Francesca Cabrini, talks behind the scenes with members of the production, including producer Jonathan Sanger in the "Marshall" hat at left.

A 19th century street scene was created for the production of the "Untitled Cabrini" film being shot off Elk Street in Buffalo.