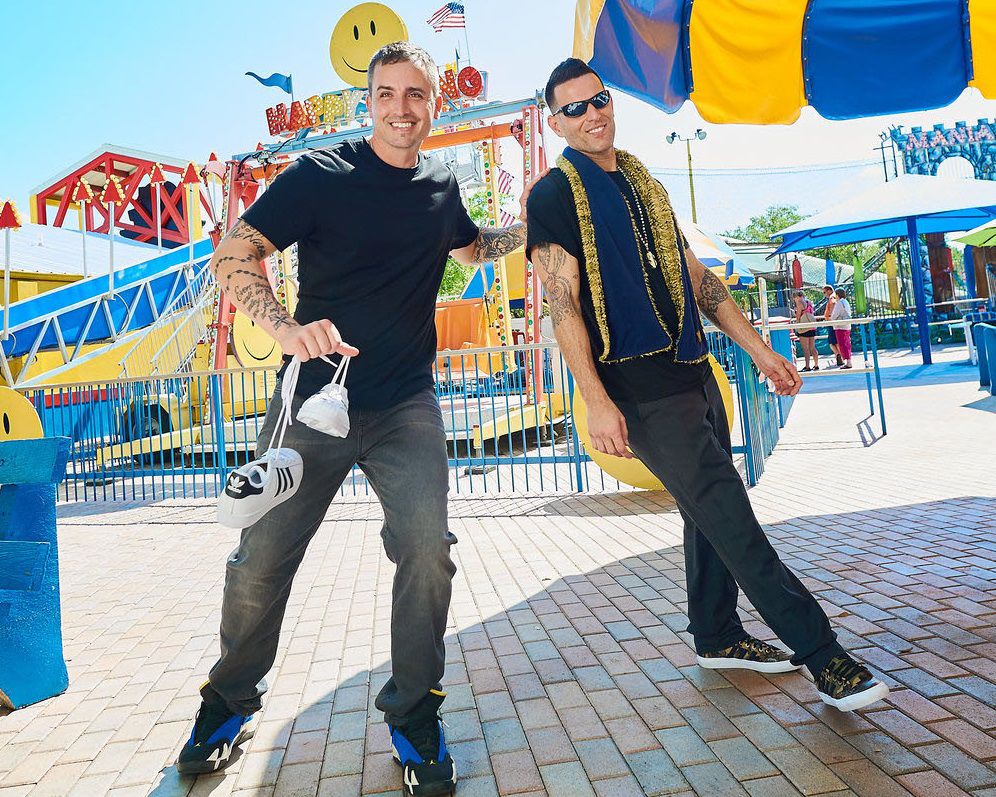 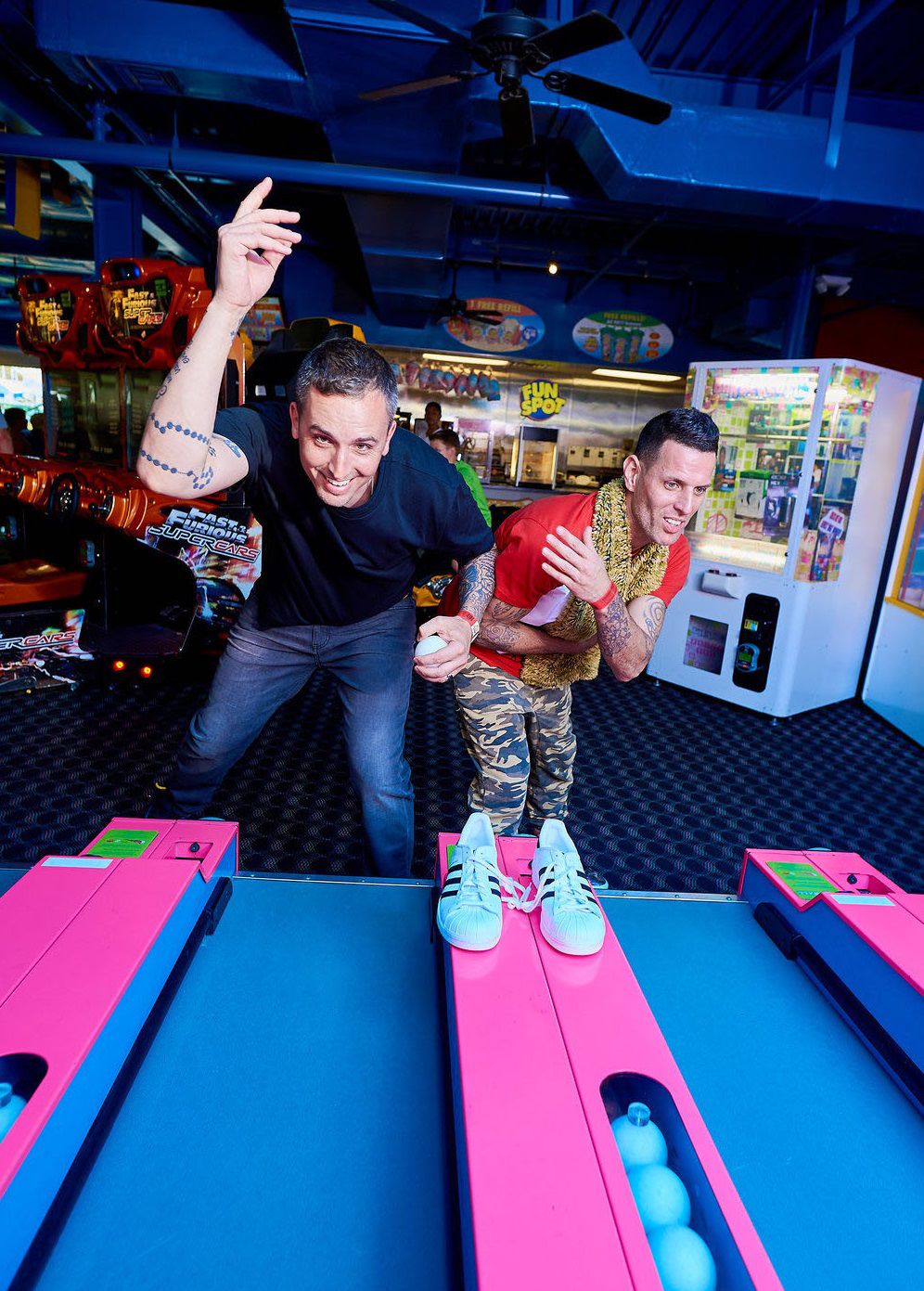 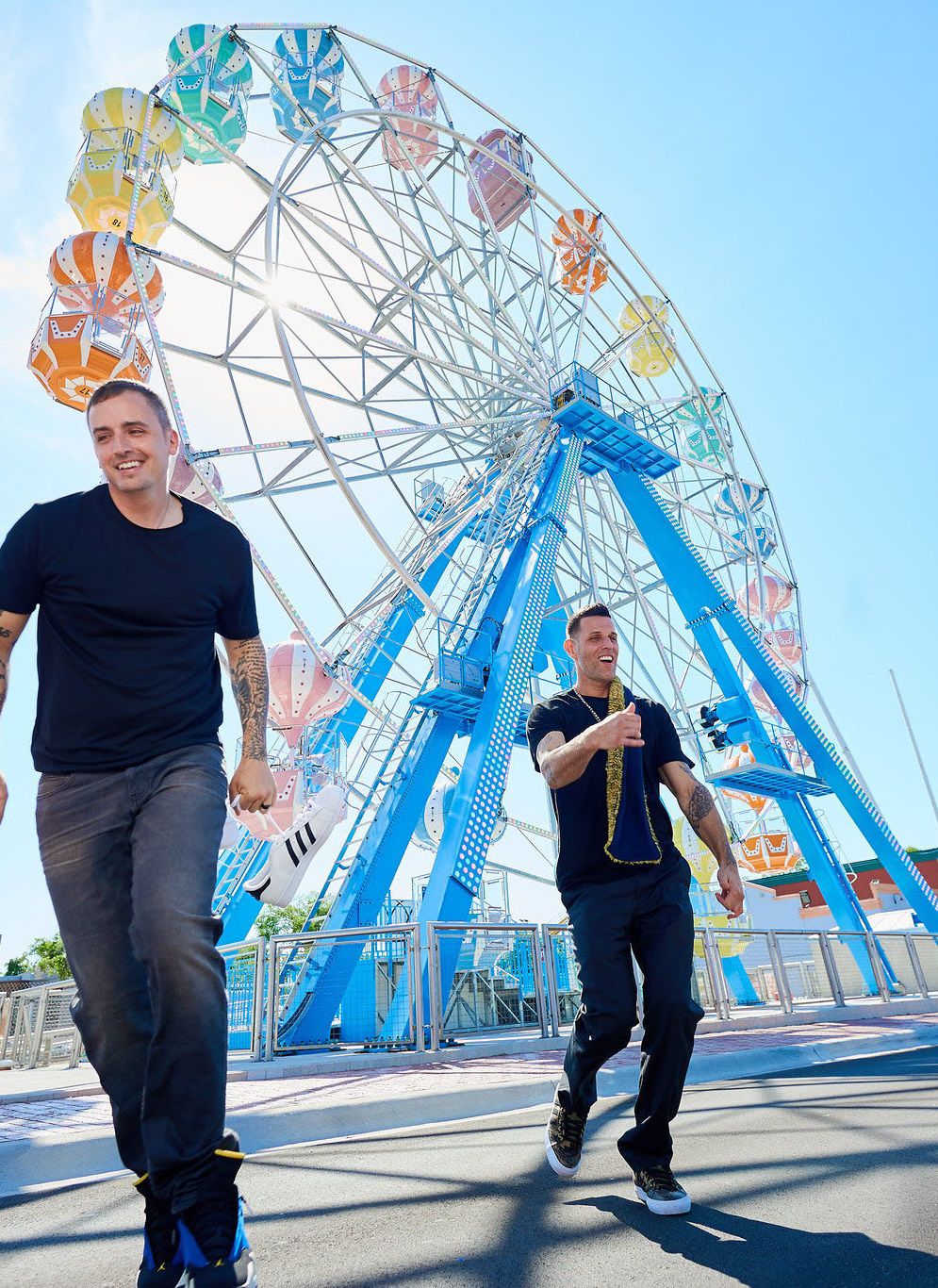 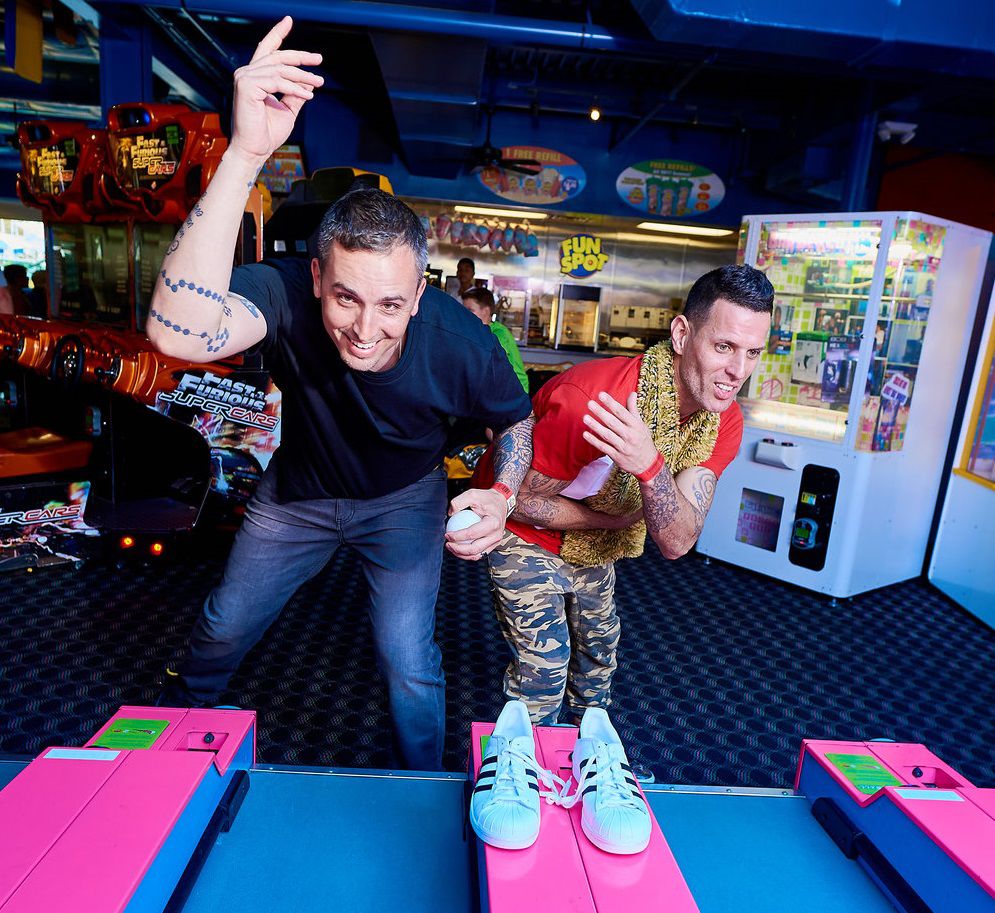 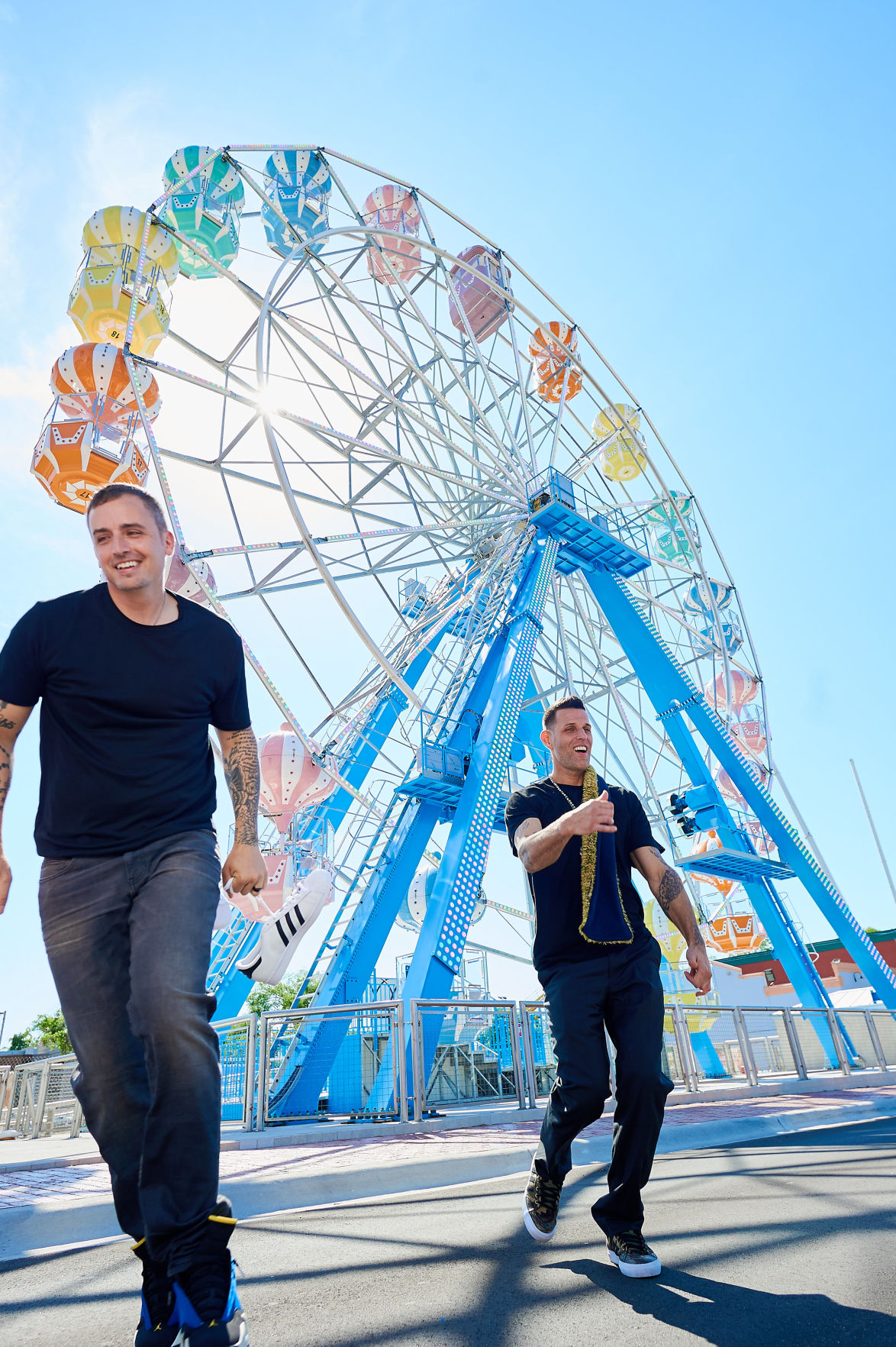 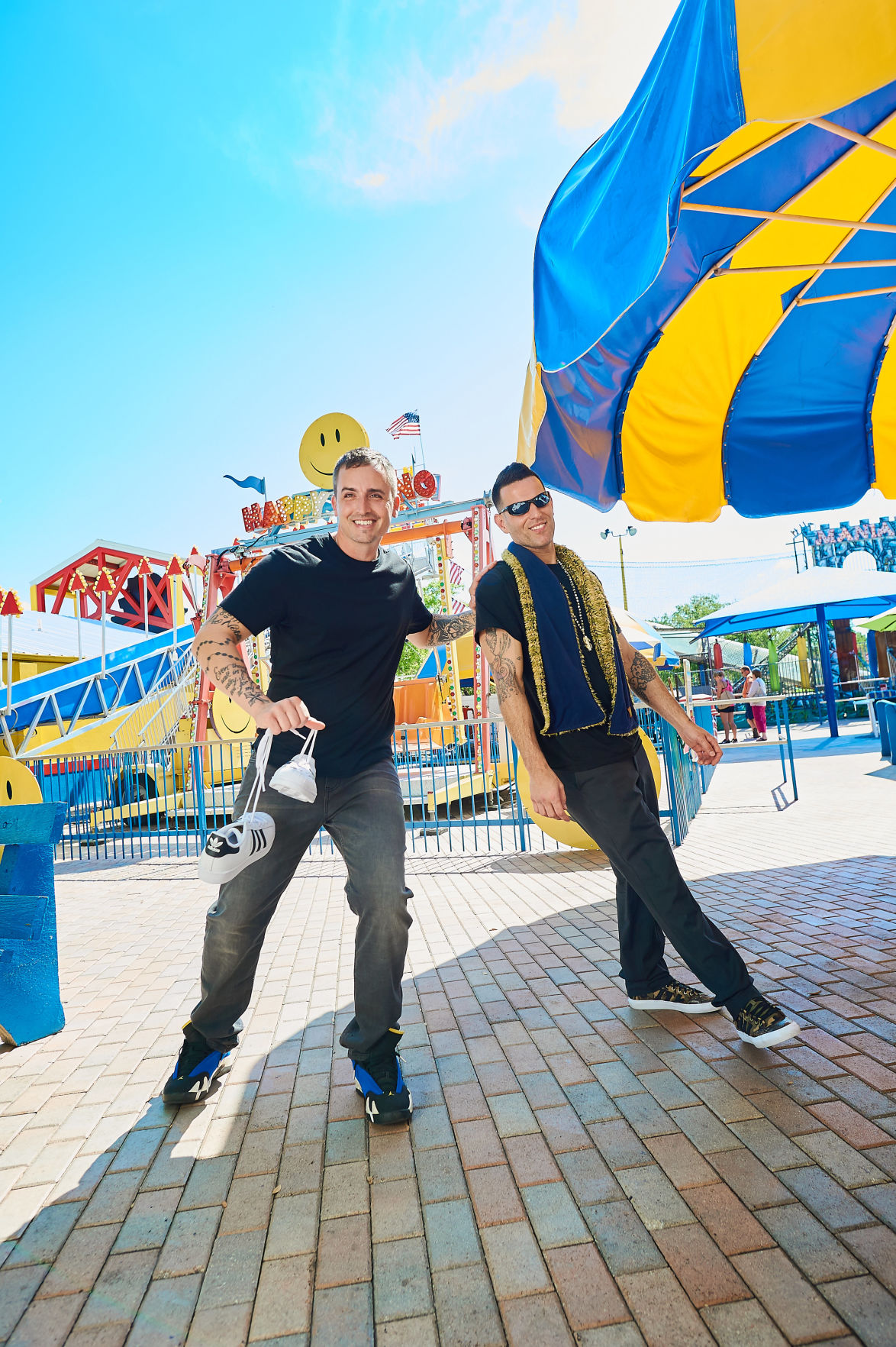 Brad Fischetti, left, and Devin Lima are bringing a pair of shell-toe Adidas sneakers to every show to honor their deceased bandmate, Rich Cronin. 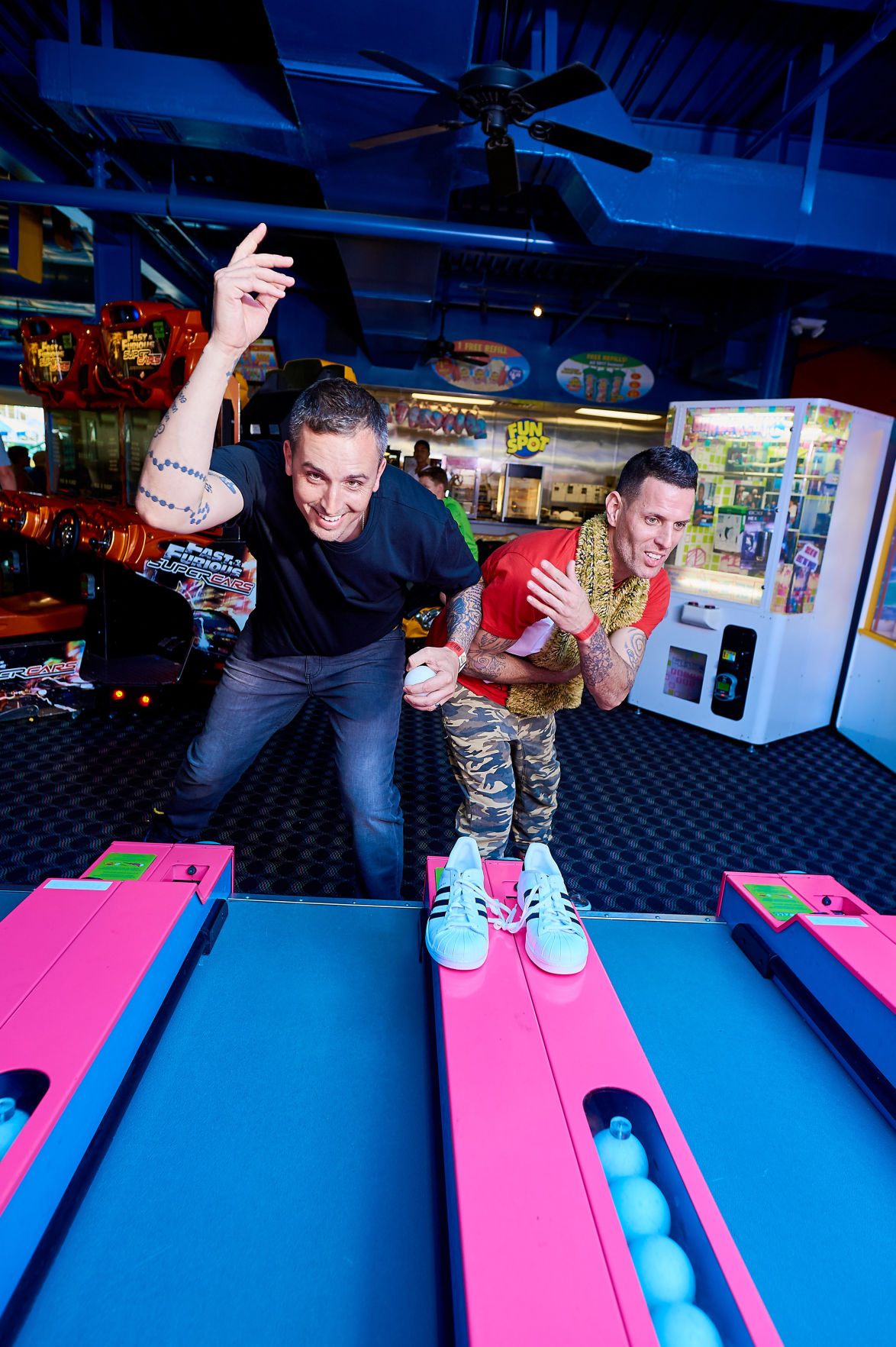 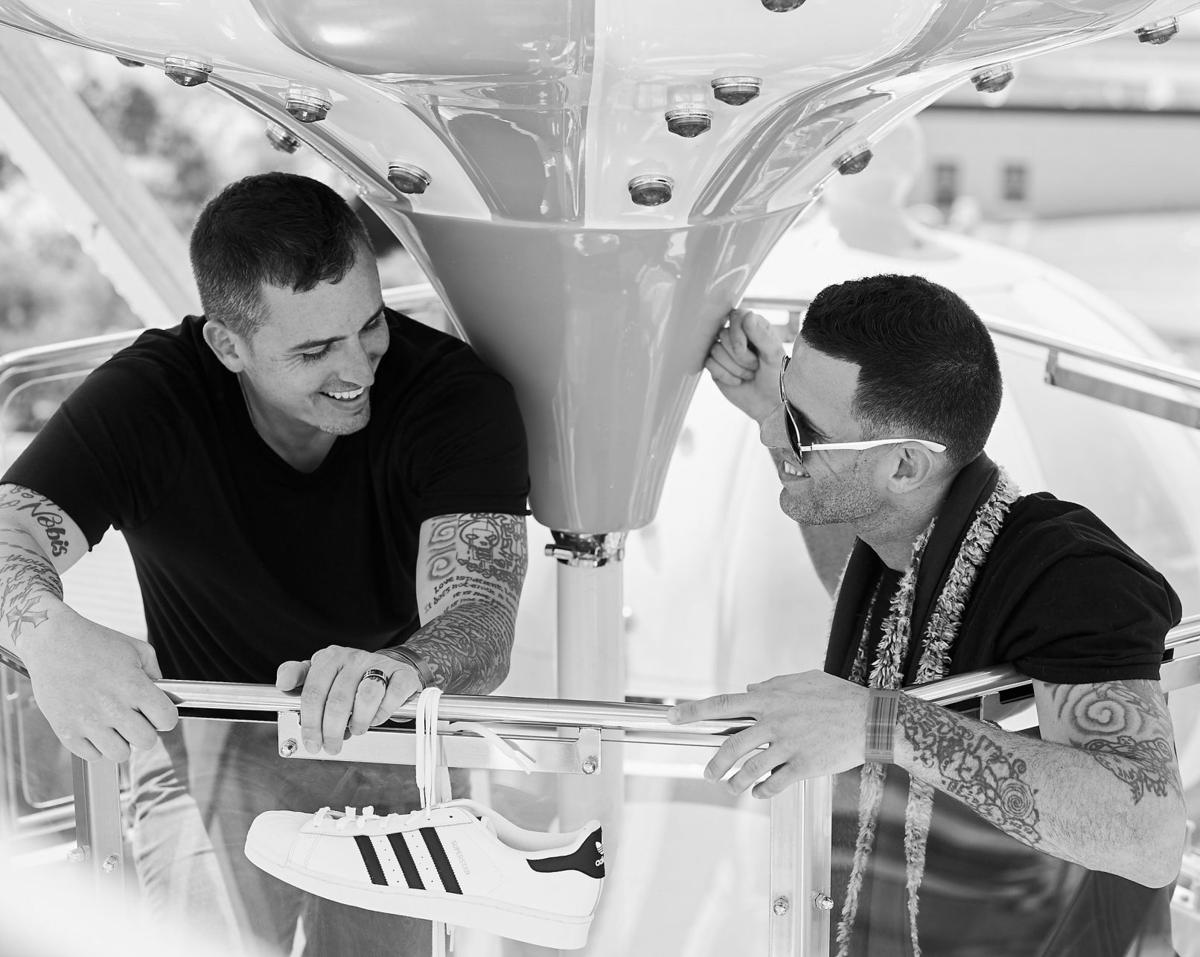 This was supposed to be over a long time ago. Years. Decades, even.

In the late 1990s, the three guys who made up the boy band LFO lodged themselves in pop-culture history with the song “Summer Girls.” The radio and MTV smash was wrapped in sugary raps and bouncy vocals and references so random that you couldn’t help but remember them: Chinese food (it “makes me sick”), “Billy” Shakespeare (he “wrote a whole bunch of sonnets”) and, most notably, “I like girls that wear Abercrombie & Fitch.”

But that ride stopped in 2002, when Rich Cronin, Brad Fischetti and Devin Lima took a break that lasted most of the next 15 years. LFO did a brief reunion tour in 2009, but at the time, Cronin was ailing in his battle against leukemia, and one year later, at 36, he died.

“When Rich died, I thought that was it,” said Shawn VanPatten, a Kiss 98.5 deejay known as “Shy Guy Shawn” and a longtime friend of LFO. “That closed the chapter.”

But it didn’t. LFO is back, with a new single called “Perfect 10” and two-week tour across the eastern United States. Fischetti and Lima and their six-piece band visit Buffalo on July 30 for a show at Studio @ Waiting Room.

Let's be real: If you’ve read this far, there’s a decent chance you were a '90s child boy-band fan, and therefore have “Summer Girls” ear-worming through your head right now. If that’s you, you’re probably also trying to remember some of LFO’s other popular songs. (We can help: “Girl on TV,” “West Side Story,” “Can’t Have You.”)

Or, if you’re still reading, you probably have a sense of curiosity that ranges from skeptical to judgmental:

Why are they doing this?

What about Rich’s parts?

Can there be LFO without Rich?  (Cronin was the group’s founder and frosty-haired frontman.)

It’s OK. You are not alone in wondering these things.

“It keeps me up at night,” Fischetti said in a phone interview from Orlando, where he and Lima live with their families. “Are we still viable? That’s the big question. Those answers will come over the next few weeks.”

The question was opened last summer, when Fischetti was texting with Jeff Timmons, the founder of the boy band 98 Degrees. During their own reunion concert tour last year, 98 Degrees played a seven-minute medley of late-‘90s hits, from ‘N Sync’s “Bye Bye Bye” to Britney Spears’ “Baby One More Time” to the LFO hit “Summer Girls.” Timmons told Fischetti about the medley, which was billed as a tribute to MTV’s famous ‘90s countdown show, “Total Request Live.”

“We were like, ‘Aw, cool, if you ever want us to come out and do a cameo, let us know,’” Fischetti said. “Kind of half-joking.”

It was one of those moments where a what-if scenario became real. Suddenly, Fischetti, who is 41, and Lima, 40, were faced with the possibility of actually getting onstage in front of an actual crowd one more time.

In one sense, this shouldn’t be a big deal. Back in LFO’s heyday, when the group was big in the U.S. and Europe, playing for crowds of screaming teens was a regular thing. But that was a different time; it felt like a different life.

“Back then, I didn’t really have any conviction,” Fischetti said. “I was just trying to go out there, play some shows, meet some people, make some money and be on TV.”

Today, Fischetti and Lima have fuller, well-rounded lives. Fischetti has five kids, owns a small record label, and works as the musical director at a church.

Lima has, in his words (because he describes it better than anyone else could), “a bunch of kids, a great girl... We play sports, man: soccer and basketball is heavy in this house, kung fu, boxing ... A lot of talk-smacking — the art of it makes it kosher. We’re tight. We’ve got the good food in life, we’re about the kale and the garlic and all of that.

“Other than that, music. Straight music.”

So if you’ve got things like church and kale and kids – if you’ve got convictions and purpose and have turn smack-talk into acceptable household patter – do you really want to re-live your boy band past?

Probably not, but … it’s music. Which neither of them ever let go.

Fischetti and Lima said yes to Timmons, and joined 98 Degrees for a show last August at Brooklyn’s Coney Island — the same spot where they shot “Summer Girls” some two decades earlier.

They left Orlando and flew to New York, where a friend picked them up at the airport. He was driving a beat-up old Nissan Sentra. “The car was so dirty we didn’t even want to lay our backpacks on the floor,” Fischetti said.

They drove into the city, had some meetings with old record label contacts and visited the behemoth pop station Z100. Then they drove out to Coney Island and pulled up to the tour buses.

“Here we are in this beat-down Nissan,” Fischetti said. “Security had us roll the windows down and (the friend) said, ‘We have some artists for tonight here.’ They’re looking at us like, ‘Yeah, sure you are.’ ”

Later that night, though, the crowd had a decidedly different reaction. When Fischetti and Lima emerged onstage to sing a few lines from “Summer Girls,” the screaming spiked. They were only onstage for less than a minute, but Lima remembers thinking to himself, “People still remember that sound.”

“We got offstage and were like, ‘That’s it. It’s over now. Back to reality,’” Fischetti said.

But a phone call came, and their reality was about to change. Four days later, Fischetti and Lima were contacted by a booking agent who was at the show. He was curious: Would LFO be willing to go back out on tour?

At first, the guys demurred. “People think it’s a luxurious life of great joy, being in the music business,” Fischetti said. “It’s really not.”

The hours are grueling. The characters can be shady. As young guys, they plowed through it, then stopped. As 40-something men, they are likely more prepared to deal with it, but should they? And even more so, there was Rich.

“Rich is gone,” Fischetti said. “Will people want to see us without Rich?”

“What will his family think?” Fischetti added. “That’s a major, major point there. We really thought about it. And Rich loved LFO. When you love something, you don’t want to see it die. I thought about it, and where Rich is at now – that perspective.

Fischetti and Lima said yes to the tour, and decided to name it “Rich in Love.” In publicity photos for the tour – and onstage during the show, hanging from a microphone stand – they have a pair of white shell-toe Adidas sneakers — a Cronin staple. They are splitting his parts between them; they won’t pump in his vocals.

“If people can’t accept it because he’s gone, we respect that,” Fischetti said. “If they were to say to us, ‘It’s not the same without Rich,’ look, it’s not the same to us, either. We’ll do our best to honor him and make him proud, and we hope you give us a chance.”

Members: Brad Fischetti, 41, and Devin Lima, 40. Former frontman Rich Cronin died in 2010 at age 36 after a battle with leukemia.

The name: LFO originally stood for Lyte Funkie Ones, although the band long ago dropped the full name and adopted just the acronym.

Penny performance: In 2000, LFO played a show for the now-closed all-girls Catholic high school Holy Angels Academy, whose students collected 2.1 million pennies for Hospice in a contest run by Kiss 98.5 FM. LFO’s last performance in the Buffalo area was in 2009 at the now-defunct Club Infinity, the year before Cronin’s death.

SINGING FOR THE ANGELS

Boy-band comeback: LFO is the latest boy band to make a comeback. Backstreet Boys – which never broke up – has performed fairly consistently since the 1990s. New Kids on the Block plays arena shows around the country, and 98 Degrees tours intermittently as well. O-Town, like LFO is doing on this tour, plays smaller club and theater shows. The one famous boy band that hasn’t made a full-scale comeback? ‘N Sync. (Justin Timberlake has been busy.)

Fischetti on LFO’s comeback prospects: “I’m not saying we’re going to turn into New Kids and be able to sell out arenas, but that really wasn’t our thing back in the day either. You don’t have to sell out arenas to have a good career in music. We’re hoping there’s enough interest in us that we can continue touring and recording music every year, and continue going out there and hanging with our old fans and earning new ones.”

Kiss 98.5 personality “Shy Guy” Shawn VanPatten on LFO without Rich Cronin: “If you’re a true fan of the band, I think you would go no matter what. But on top of that, I think there are people who will go to honor him and his memory.”

As concert industry attempts to ramp up, questions remain

The decimated music industry is still in the early days of imagining its full-scale rebirth.

Brad Fischetti, left, and Devin Lima are bringing a pair of shell-toe Adidas sneakers to every show to honor their deceased bandmate, Rich Cronin.