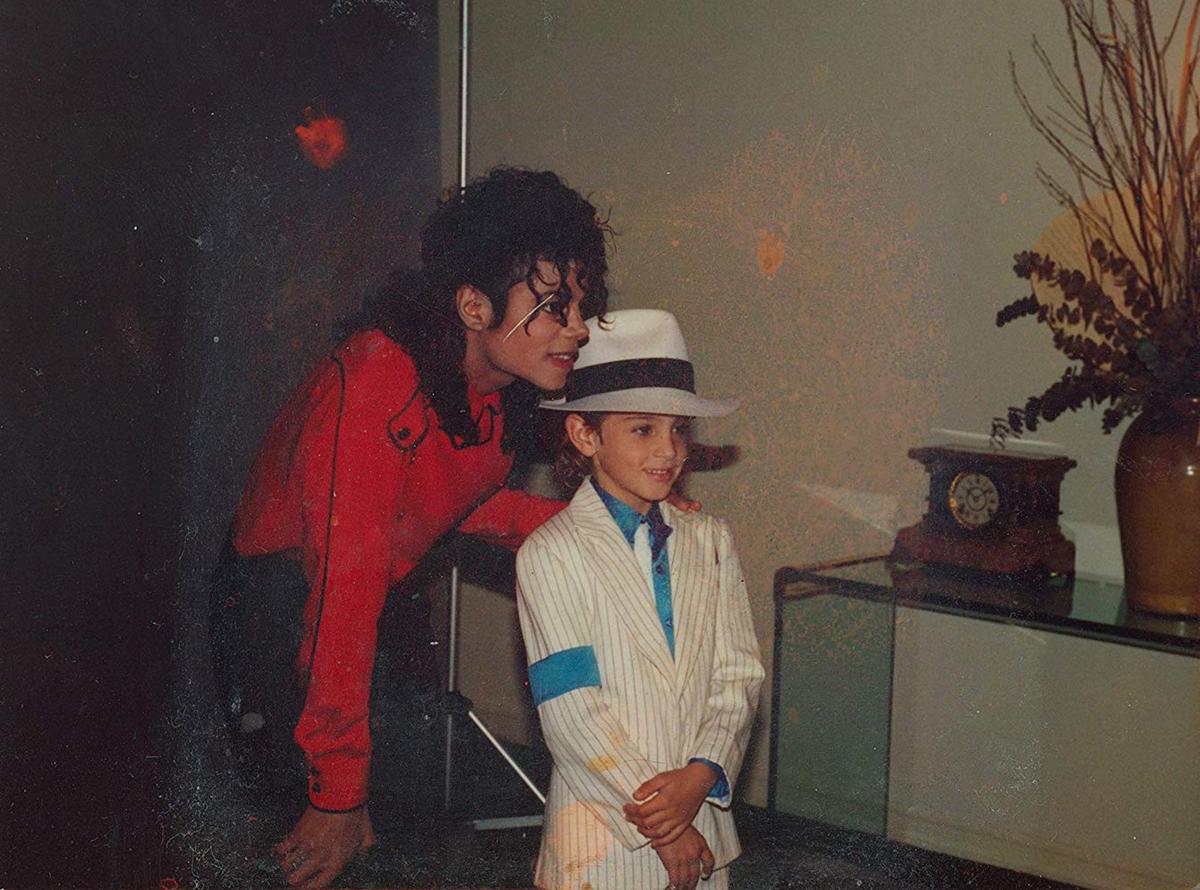 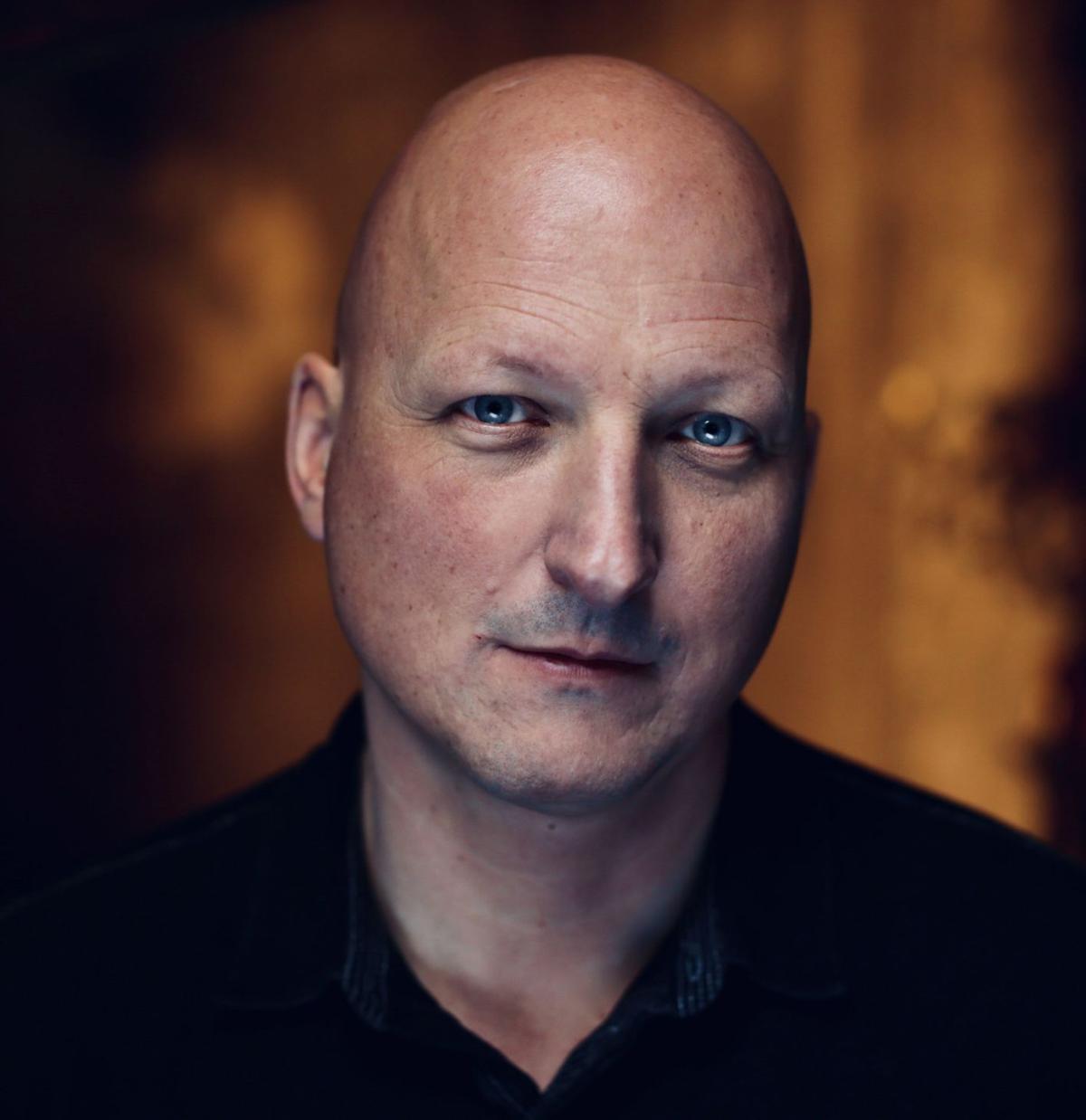 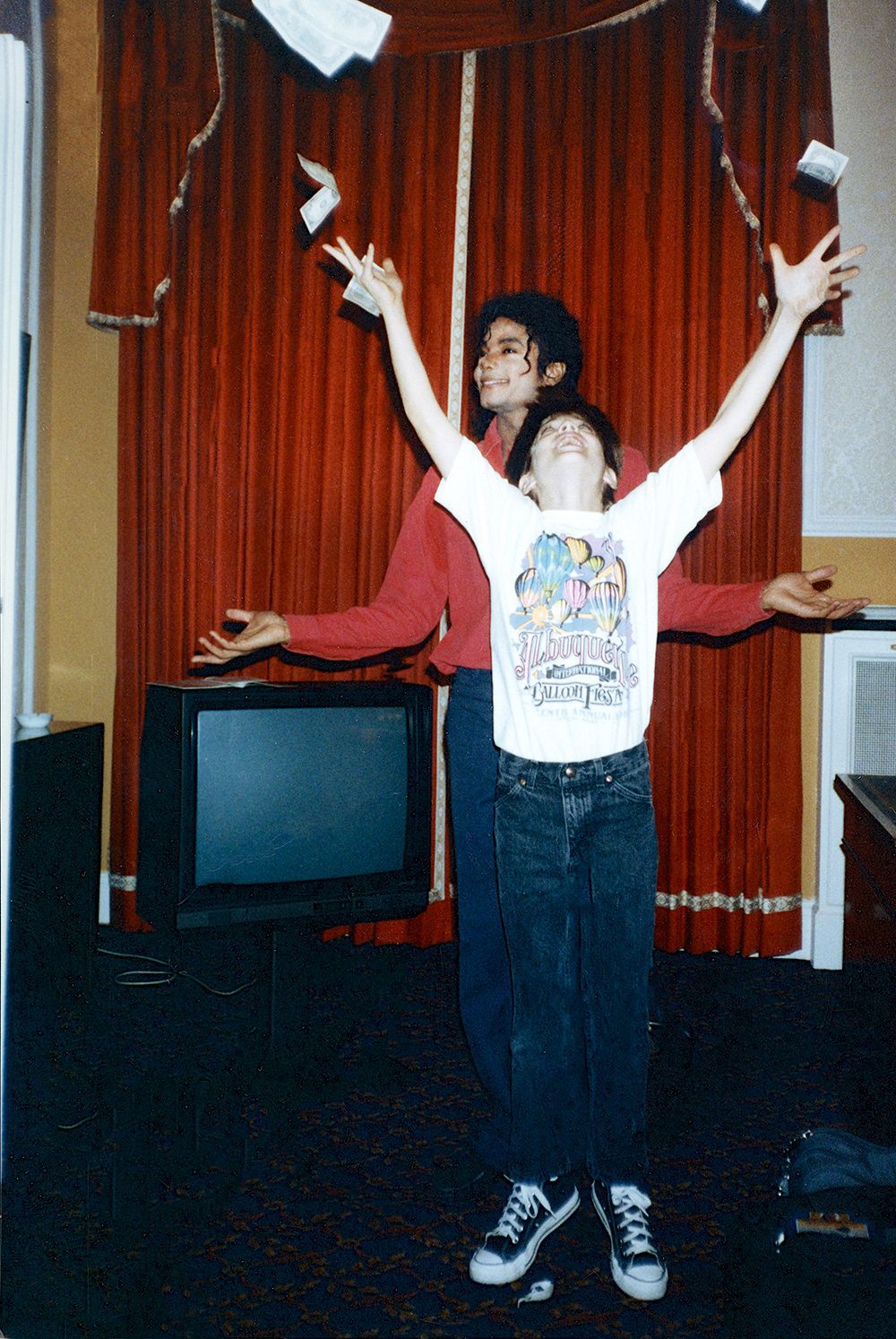 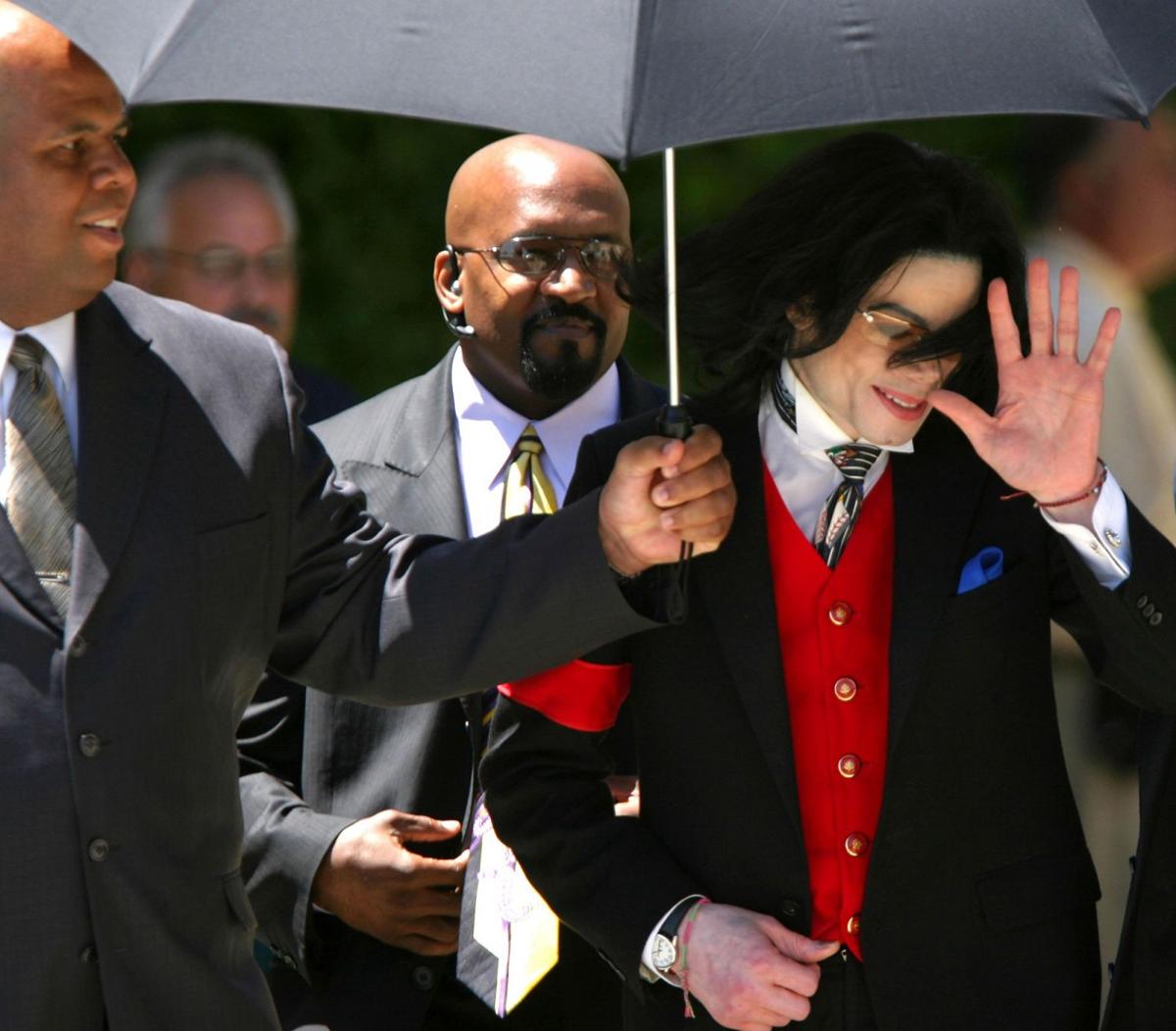 Michael Jackson gestures to his fans as he leaves the Santa Barbara County Superior Court in 2005. (Connie Aramaki/Getty Images/TNS)

It is easy to see why the Michael Jackson estate wants to prevent HBO from airing the controversial two-part documentary, “Leaving Neverland,” at 8 p.m. Sunday and Monday.

The estate filed a $100 million lawsuit late last week against the pay-cable network and its owner in an attempt to stop it from airing the four-hour film by Dan Reed, which premiered at the Sundance Film Festival last month.

The Jackson estate has labeled the documentary “a tabloid character assassination.”

With footage of Jackson’s interactions with two adorable young boys and their families who worshiped him, it is a devastating and convincing account of the alleged sexual abuse by the late King of Pop.

Now adults in their 30s, Australian-born Wade Robson and Californian James Safechuck give powerful accounts of their alleged abuse by Jackson as young children when they thought they were living a fairy tale at his Neverland Ranch.

“I felt like I had been anointed in some ways,” Robson says early in the film.

Jackson loyalists may question why any of his supporters weren’t given an opportunity in the film to combat the charges. In addition, there have been questions over whether the men are now detailing their stories to revive a lawsuit seeking monetary damages that had been dismissed.

But the two accusers indirectly answer the defense by the Jackson estate that they previously supported Jackson against another abuse claim by a young boy that went to trial in 2005.

Yes, Robson testified on Jackson’s behalf and helped him become acquitted. Robson even says he was “excited about the idea of being able to defend him” to save him. But he and Safechuck ultimately came to regret they lied for decades because of their love for Jackson and the fear he instilled in them as children if they told the truth.

The case has some similarities to the argument against the testimony this week by Michael Cohen, President Trump’s former lawyer, before Congress.

Yes, Cohen lied to Congress before and is going to prison. He said it was to protect Trump.

Yes, the Jackson accusers say they lied before to defend Jackson. They said they did it to protect Jackson.

Even the most ardent Jackson supporters may have difficulty believing his accusers are lying after watching the four hours.

The two adult men, who look somewhat alike today and speak in measured, unemotional tones for most of the four hours, have very similar stories of their so-called magical “fairy tale” life with Jackson. The similarities make their claims more believable.

That includes the way they met Jackson. Robson met Jackson after he won a contest in Australia. Safechuck met him while shooting a famous Pepsi commercial.

They explain that they and their families were seduced by Jackson’s celebrity and they were so in love with – and being around – the pop star that they didn’t realize he was doing anything wrong sexually when they were so young.

“It just didn’t seem that strange,” said Robson of one early sexual experience.

The documentary, which is heavy on low-key interviews that may test the patience of some viewers, easily could have been 30 to 45 minutes shorter over the two nights.

It not only puts Jackson on trial; it also puts the mothers of the boys on trial in the court of public opinion for failing to realize there was something seriously wrong with allowing a man in his 30s to sleep in the same room and same bed with their sons at age 7 and age 10.

Robson’s wife, Amanda, a young mother, couldn’t comprehend what her mother-in-law must have been thinking when Wade was so young. Robson's entry into fatherhood apparently gave him the strength and motivation to come forward with the allegations.

The initial inappropriate on-screen attitudes of the mothers of Robson and Safechuck may make some viewers feel uncomfortable, especially when the mothers recall all the bonuses they received when they were associated with Jackson’s celebrity.

It isn’t until near the end of Part 2 that the mothers seem to understand what they have done.

Safechuck’s mother admits she was happy when Jackson died in 2009. Robson’s mother is in tears when she comes to terms with what she has done to her son and her family by believing Jackson wouldn’t harm him.

But it is the low-key way the men detail the alleged abuse – with graphic details – and how it affected them as adults that is the most compelling.

Watching Robson and Safechuck slowly and painfully recall how Jackson charmed, groomed and threatened them against revealing his abuse may remind some of the continuing Catholic Church sex abuse crisis.

It is moving television that provides another example of the power of celebrity and how adults can lose their senses when getting near it.

The film also speaks to the long-term impact on the lives of people who are abused and their families.

Robson, who went on to become a famous choreographer who worked – and was romantically linked – with Britney Spears, delivers the most powerful moment in the four hours. Near the end of the documentary, he explains how he was finally able to tell his brother the truth after seeing a therapist.

If those moments in “Leaving Neverland” don’t leave you chilled, check your pulse to see if you are alive.

After Monday’s concluding episode, Oprah Winfrey interviews the accusers in an one-hour special, “Oprah Winfrey Presents: After Neverland,” that will air on OWN and HBO.

It will be back to Broadway in December at Shea’s Buffalo Theatre starting with "Tootsie," but you'll have to wait awhile for "Hamilton."

Alan Pergament: Local TV stations have improved diversity, but not in weekday anchors

Ewing is a strong reporter blessed with an important tool for a broadcaster – a distinctive, soothing voice, writes Alan Pergament.

WNYers share their meal dreams for when 'normal' returns

Back in May, with dining rooms closed, Andrew Galarneau asked readers: What is the first meal you want to have after this is all over?

Finding something to eat can become a greater challenge, especially if you intend to support a local restaurant, so here are some ideas.

Chrusciki Bakery's 33-year run as a year-round vendor in the Broadway Market came to a close at the end of June, owner Ania Duchon confirmed following a detailed update on the business' Facebook page.

The studios need audiences to release films and theaters need films to reopen. It’s the movie equivalent of the chicken and the egg.

To attract business to its spacious new Black Rock location, Hatchets & Hops is introducing a coffee and bagel shop.

Buffalo's coffee shops have been busy during the pandemic, continuing major projects or undertaking new ventures.

Washington Redskins will change its name and logo

Washington Redskins will change its name and logo

Movies in a Minute: 'Greyhound'

Movies in a Minute: 'Greyhound'

How to safely road trip this summer

How to safely road trip this summer

Michael Jackson gestures to his fans as he leaves the Santa Barbara County Superior Court in 2005. (Connie Aramaki/Getty Images/TNS)