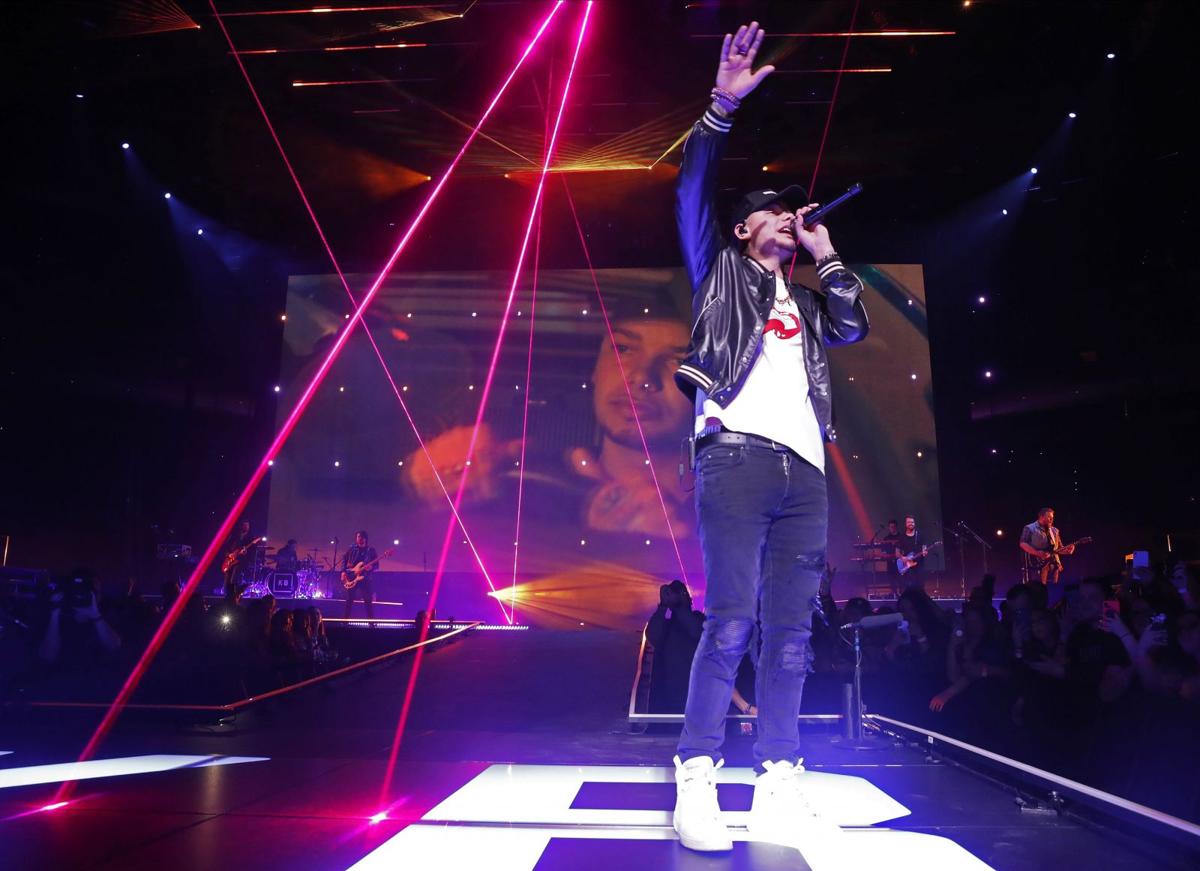 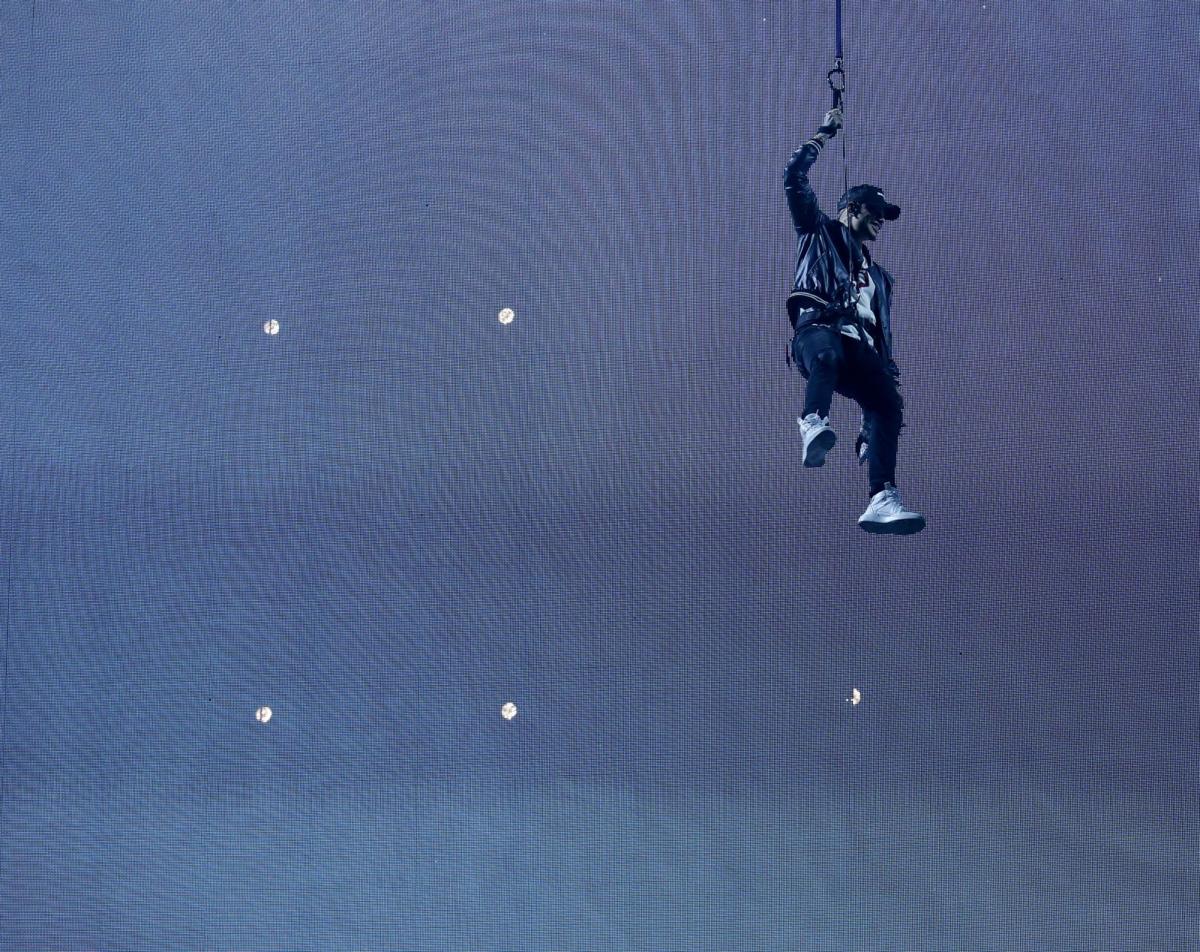 Kane Brown descends from the rafters to open his concert at KeyBank Center. (Robert Kirkham/Buffalo News) 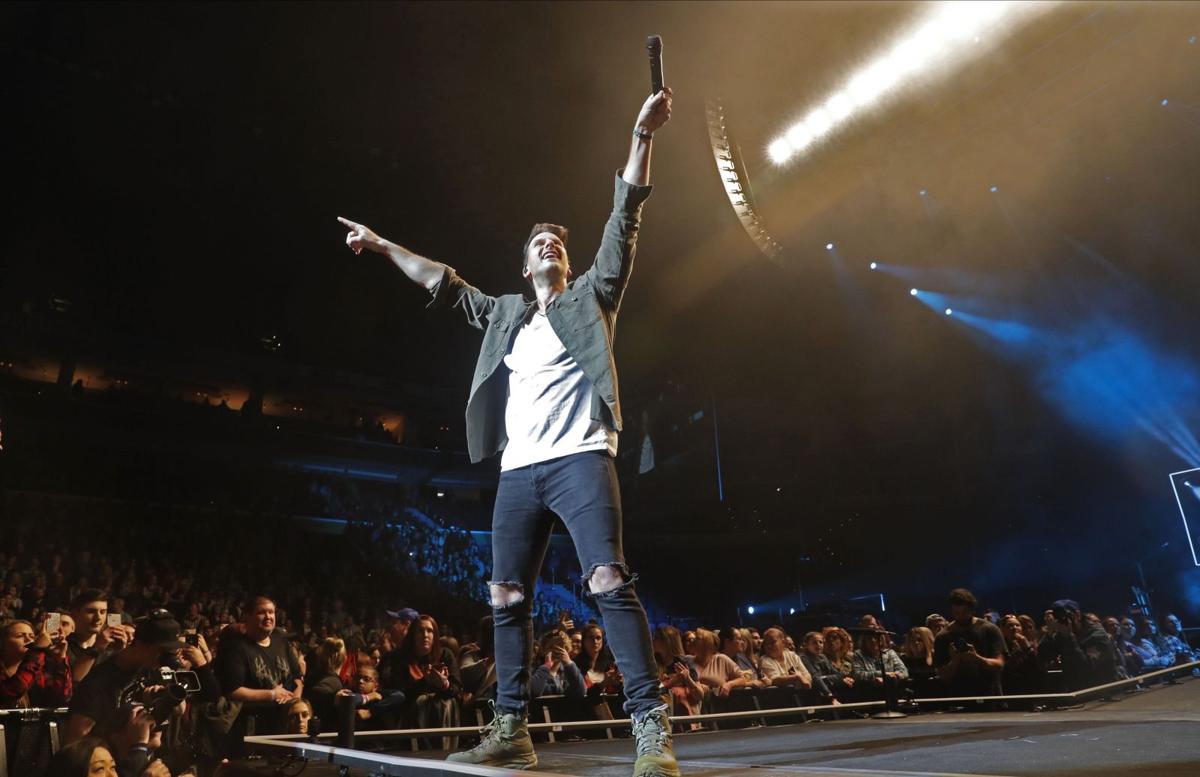 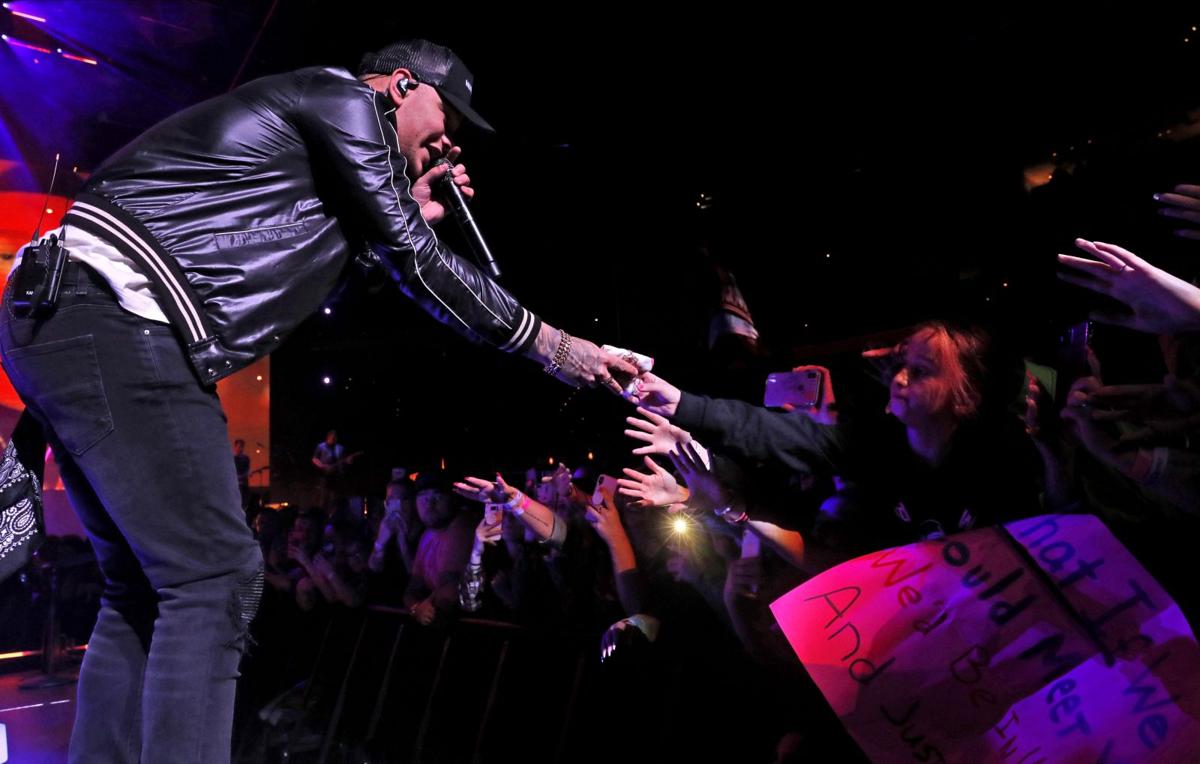 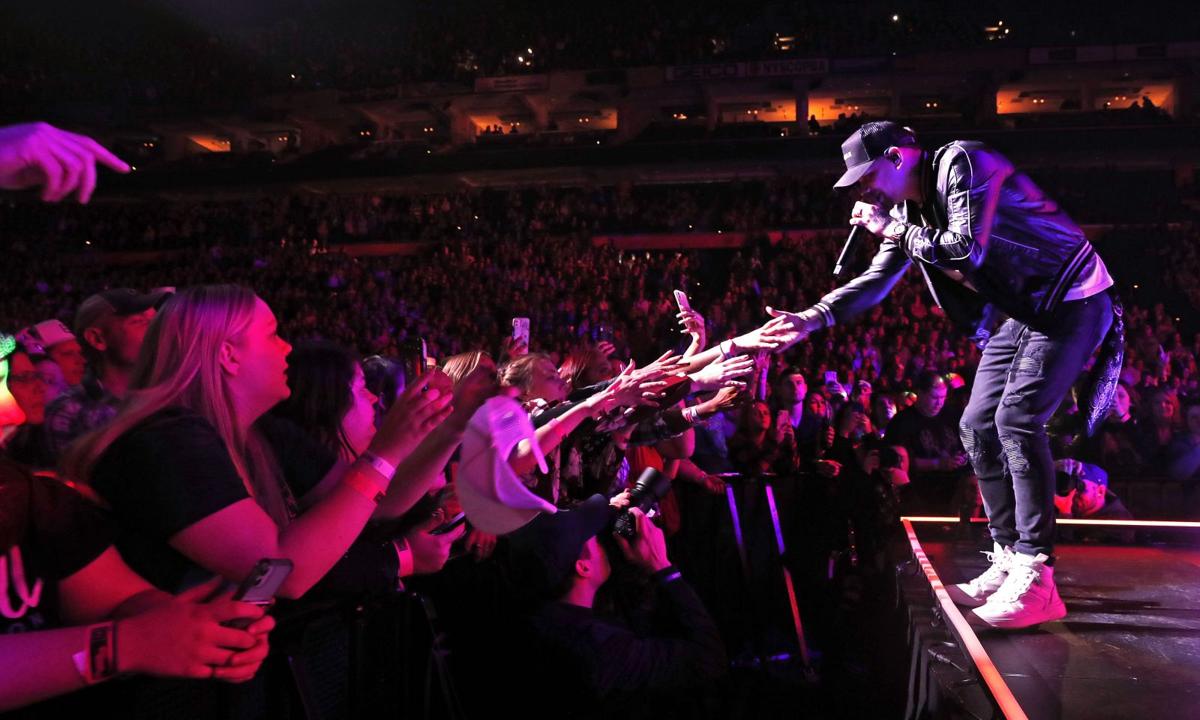 What a difference seven months makes.

Back in August of 2019, urban-country singer and bandleader Kane Brown played a sold-out concert in Erie County Fair's Gusto Grandstand without an opening act, but with legions of adoring fans and bushels of star power. He also, charmingly, wore his own merch: a KB-emblazoned hoodie.

On Saturday night, a stop on his Worldwide Beautiful stadium tour, Brown rollicked at what appeared to be a sold-out KeyBank Center with three excellent supporting acts (Russell Dickerson, Chris Lane and Restless Road) also cross-pollinated in the rock-country ethos.

His upgraded wardrobe still features him in his signature, dominant black, but this time with a white Gucci T-shirt printed with red lips and extended, forked tongue under a smart satin baseball-inspired jacket.

And where he took the fair's grandstand stage last summer by simply descending stairs as his band played a song from his 2018 release "Experiment" – "Baby Come Back to Me" – Brown was lowered from the top of KeyBank Center from a cable. The opening song "Lose It," also from "Experiment," began the solid set that had fans in full-tilt party mode.

During the show Brown and his six-member band played two new, unreleased songs "not even out yet": "Vodka and Cranberry" and "Be Like That." The cocktail-infused lyrics include "I'm hanging on every word just like a lime on your glass" with Brown singing over a dance beat with electric organ riffing that veers into high disco territory. "Be Like That," from the relationship ups and downs genre, was announced as his next single, to be released this month.

He also explained, "So if 'm moving a little stiff," it was because he had played basketball earlier in the day with Chris Lane and Russell Dickerson.

Two songs that made both grandstand and stadium playlists were "Heaven" and "Short Skirt Weather," at opposite ends of his lyrical spectrum: one contemplative, the other made for fun. This time around, "Heaven" was performed against a gigantic celestial image that translates up to the 300 level seats. For "Short Skirt Weather," Brown brought up a young audience member as lyrics were projected lest anyone not yet know the made-for-sing-alongs hit.

Brown shared childhood videos and photos on the mammoth screens onstage, showing him at a young age in cowboy hat, and, touchingly, with a birthday cake as off-screen voices sing to him.

A new dad, Brown played "For My Daughter" with images of her projected during the song. His lack of a relationship with his father is something Brown speaks about during his shows, and he prefaced the song with a vow to be "the best damned daddy I can be."

All the opening acts would be brought back onstage to perform with Brown, always a generous and democratic gesture to share the limelight with ascending stars.

The trio Restless Roads performed with Brown on "Take Me Home," all four singers gorgeously harmonizing at the edge of the stage's long runway. Chris Lane and Russell Dickerson, both powerful frontmen, sang with Brown on "Pull It Off."

He may be a stadium act now, but Brown still stops in his tracks, bends over, takes fans' smartphones to make carefully constructed selfies. He had removed that nice satin jacket mid-set and, after signing one last autograph, left the stage but, realizing the jacket was still onstage, he ran back, grabbed it and was off.

Kane Brown descends from the rafters to open his concert at KeyBank Center. (Robert Kirkham/Buffalo News)