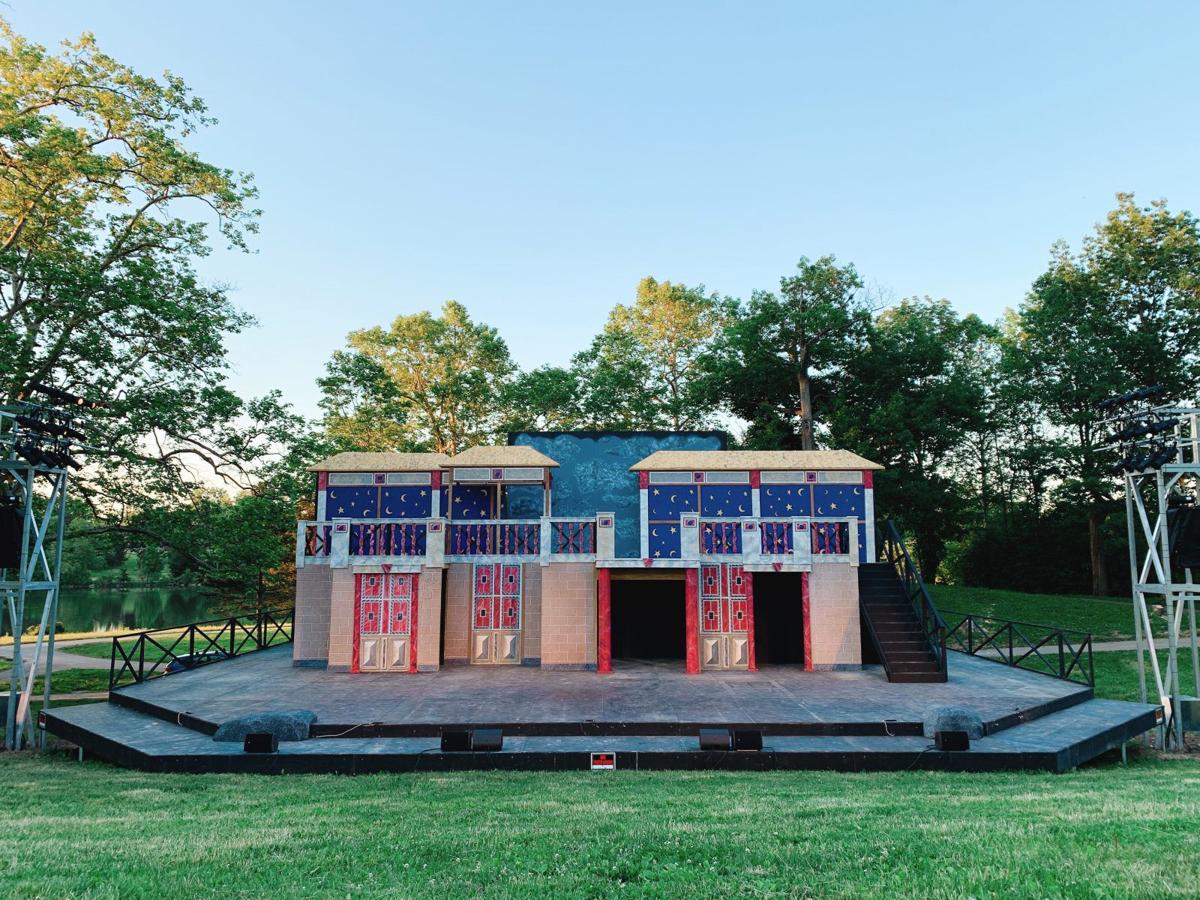 The set for the 2019 production of "The Tempest" at Shakespeare in Delaware Park. (Francesca Bond/Buffalo News) 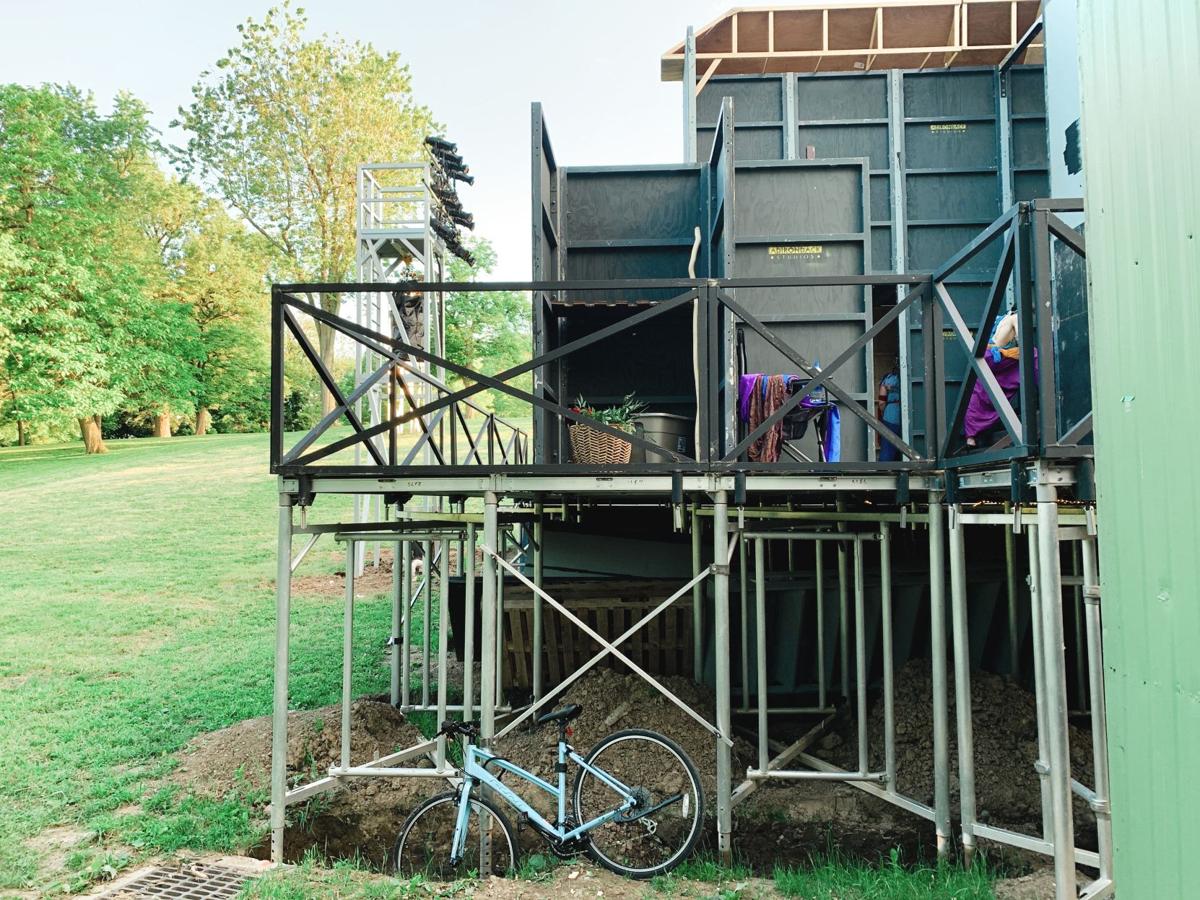 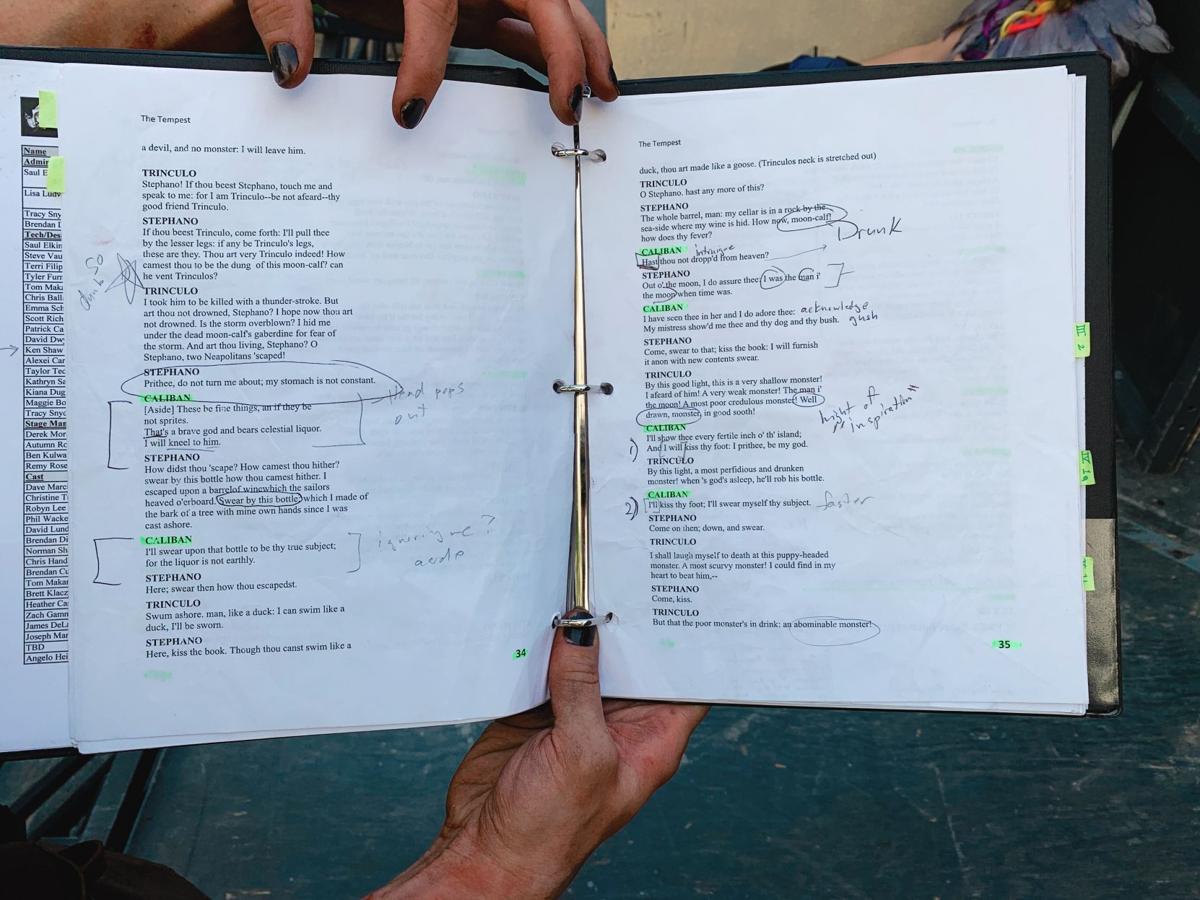 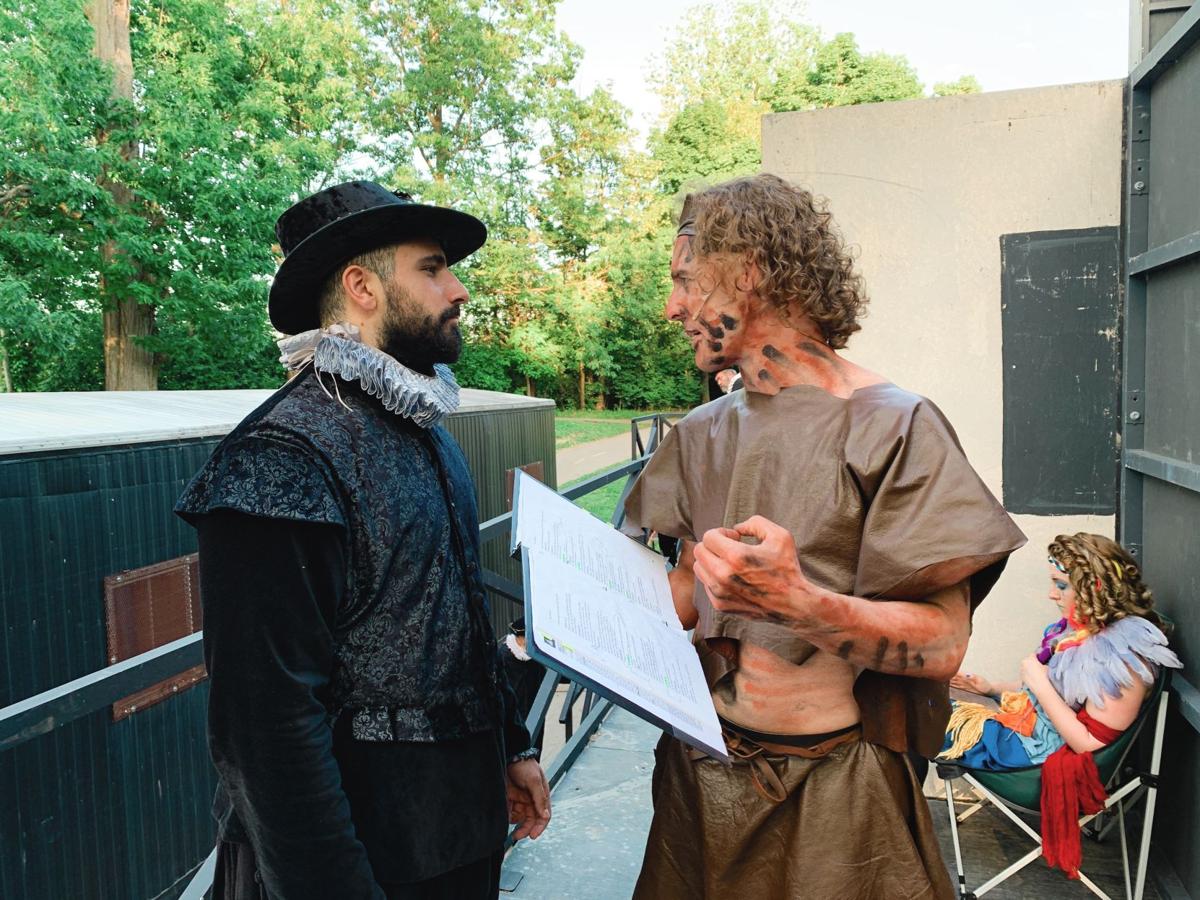 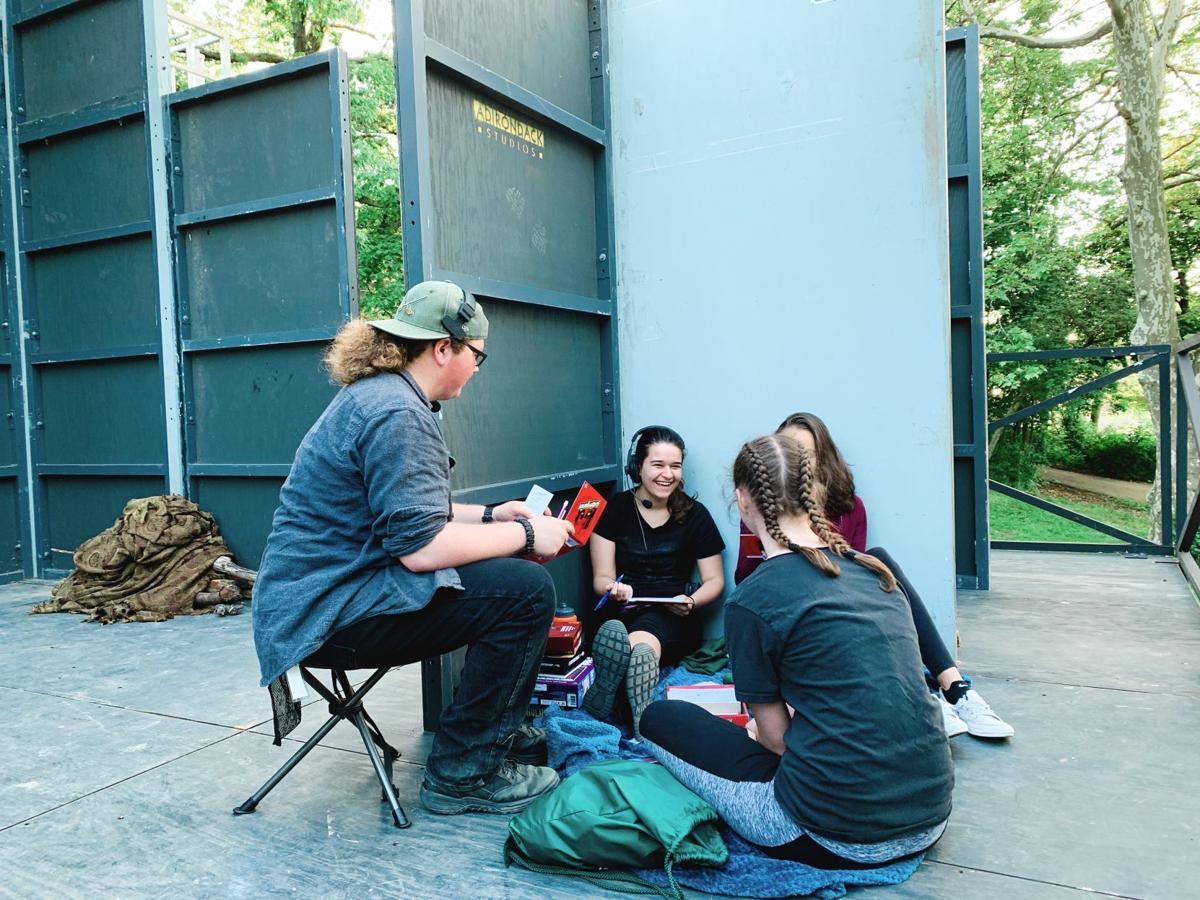 I only started shaking about 10 seconds to showtime.

For one night, I played the (minor) role of a mariner in Shakespeare in Delaware Park's "The Tempest," in the name of journalism.

I had one simple job. I arrived about an hour to showtime and Angelo Heimowitz, a fellow mariner, guided me through our stage blocking in the opening scene. "The Tempest" opens with a nasty seastorm brought on by the lead character, Prospero, to seek revenge on his enemies. The set isn't a boat. There's no real water. Actors stumble, fall and sway, giving the illusion that gusts of wind and water are knocking them over, which was also, now, my job.

I was to frantically careen onstage as if the imaginary rocky boat had just thrust me forward, then run to the staircase on stage left. There, I had to wait for a cue, "You mar our labor!" and then act like water knocked me to the left. My next cue, "To cabin, silence, trouble us not," signaled my run offstage. Easy enough? I went through it at least four times.

I pitched this story idea to know what it was like to be an actor in Shakespeare in Delaware Park. It's unlike other productions around here because it's free, outdoors and public. People can come and go as they please, setting up picnics and drinking. As director Saul Elkin pointed out, it's the first theater performance many Buffalonians will experience for those reasons.

Though "The Tempest" doesn't have a large cast of extras, they found a walk-on role for me.

[Related: What I learned as a Frightworld monster — stained teeth, fake blood and all]

Costumer Designer Ken Shaw, dressed me as a man (in the 1600s, women were believed to be bad luck on ships) in yellow gaucho pants with elastic bottoms and red striped pieces of fabric down the side, a black, long-sleeved jacket with a popped collar and tiny gold buttons down the front. Oh, and a hat-- a black, puffy, velvet hat.

The cast eased my nerves with their theater advice.

"I've done 50 of these and I still get that feeling every time," said Brendan Didio, who plays Ferdinand, when I told him I was nervous.

"If you're not nervous, get nervous," said Christine Turturro, who plays Miranda. She said it was one of the best pieces of acting advice she received, because if someone gets too comfortable, they might make more mistakes.

My acting experience lasted an exhilarating 15 seconds. I tried to convince myself that I was really on a sinking ship, a la Daniel Day-Lewis.

Heimowitz asked if I wanted to go on with them again toward the end when the mariners realize that the rest of the crew is alive and the ship is fixed. Another scene! Broadway is calling.

I agreed and waited backstage with the cast until the end. I smiled at people walking by as if I belonged. I talked about college graduation with Turturro and tarot cards with Heimowitz, who also told me that his grandmother went to high school with Barbra Streisand.

Still, my big acting debut didn't answer my original question. What is it really like to be an actor in Shakespeare in Delaware Park? I learned that the cast becomes a big family. The costumes get sweaty, nearly everyone said, and they find camaraderie in moaning over the heat.

Before the production opened, I stopped by a Saturday dress rehearsal. The wind was blowing, rain sprinkled down and the rehearsal would soon be canceled because the stage would be too slippery and too dangerous. But the weather made it easy to picture the seastorm. It was only a rehearsal (the actors wore T-shirts), but the energy was there. The seastorm scene was immersive. Actors swayed with imaginary water and hopped overboard on a ship that no set helps to create.

Elkin, director of "The Tempest" and founder of Shakespeare in Delaware Park, sat in a lawn chair at the top of Shakespeare Hill, watching his actors.

“There is this natural world around us,” Elkin said.

“I call him the Morgan Freeman of Buffalo,” said 25-year-old actor Brett Klaczyk, who plays Antonio. "You're like, 'Can you tell me stories by the fireside while we eat s’mores?’ ”

After 44 years of running Shakespeare in Delaware Park, Elkin seemed relaxed. The rehearsal was about to cancel for rain, but this was not a man scrambling.

He discussed some of the challenges the actors face while performing free theater in the park. Clear line delivery is crucial to helping the audience follow the dialogue. Elkin doesn't want the actors to sound like they were all “educated at Oxford.” He'll translate a line here and there, though some lines are off-limits to changes. “You can’t change ‘to be or not to be,’ ” Elkin said. It's all intended to make the play accessible to the wide audience it receives, and for the most part, Elkin gets everything he wishes for.

“Saul is a big picture director. He wants you to make your own choices,” Klaczyk said.

Shakespeare's 'The Tempest' is a magical affair

Actor David Marciniak is making his sixth performance in Shakespeare in Delaware Park. This time, he plays the lead role of Prospero.

“He’s one of the most in-demand actors in town,” Klaczyk said.

For Marciniak, “Clarity has to be the actor’s priority." One of the biggest challenges, he said, is to speak the “foreign language” of Shakespearean early modern English in a way that everyone understands, from the very old to the very young, to the people who studied Shakespeare in college and the ones who have never picked up one of his plays. Actors have to walk the line between being expressive enough to convey their emotions to an audience of possibly 2,000 while remaining believable.

On the Tuesday night before the play's opening, the sky was clear. The sunset showered the actors in hues of pink and yellow. It was warm, but not hot. Four children sat just feet away from the stage, leaning toward the actors, drinking in the antics. A few people sat on blankets on the hill. A passerby stopped to catch random minutes of the dress rehearsal.

Backstage, teenage assistant stage managers waited for their next duties. (There aren’t many scene changes in "The Tempest.") One actress rested in a lawn chair, hidden behind a makeshift wall, and read on an iPad. Some rehearsed lines. Aside from the location, it was a typical backstage scene.

Klaczyk, who was covered head-to-toe in heavy black costuming, ran offstage after performing in the opening storm scene. He was out of breath and sweat dripped down his face.

He has a degree in theater from Niagara University, as do a few of the other cast members, but a degree isn’t necessary. In his experience, degrees are great, "but can you tap dance?"

“Can you tap dance?” I asked him. He did a jig, clicking his heels in his black shoes.

“So, no,” joked Heather Casseri, who plays Spirit.

Phil Wackerfuss, who plays the wild, animal-like Caliban, prepared to go onstage. Wackerfuss is a dancer, first and foremost, which is evident in his stage movements. To him, it feels like a circus, in the way in that it’s performed outside, as Shakespeare intended, to an audience that is “sometimes paying attention, sometimes not.” Actress Robyn Lee Horn added, “sometimes drinking.”

Wackerfuss said he goes through the entire show in his head before each performance. But sometimes, like in the previous night’s rehearsal, a line might not come, and you can’t adlib Shakespeare.

“I knew one guy who could do that," Wackerfuss said. "He’d, like, ad lib in iambic pentameter."

Performances begin at 7:15 p.m. through July 14 at Shakespeare in Delaware Park. Admission is free.

Waldman has the easiest forecast for her final day at the station Sept. 23 after five years: emotional, with a chance of some precipitation in the form of tears.

The Bills may have suffered a 23-16 upset loss to the Steelers on the field Sunday, but they were winners in one area – TV ratings.

The set for the 2019 production of "The Tempest" at Shakespeare in Delaware Park. (Francesca Bond/Buffalo News)