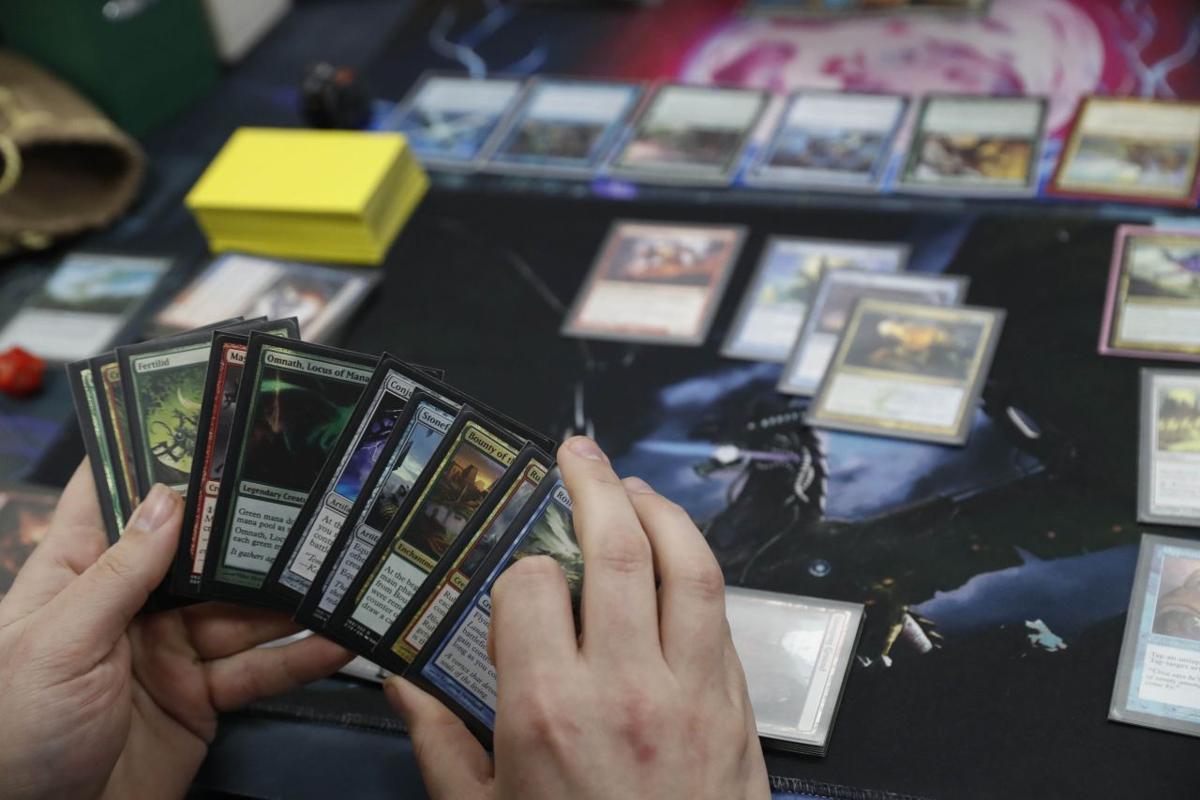 Magic: the Gathering is a popular card game played at spots like Dragon Snack Games on Maple Road in Amherst. (Sharon Cantillon/Buffalo News) 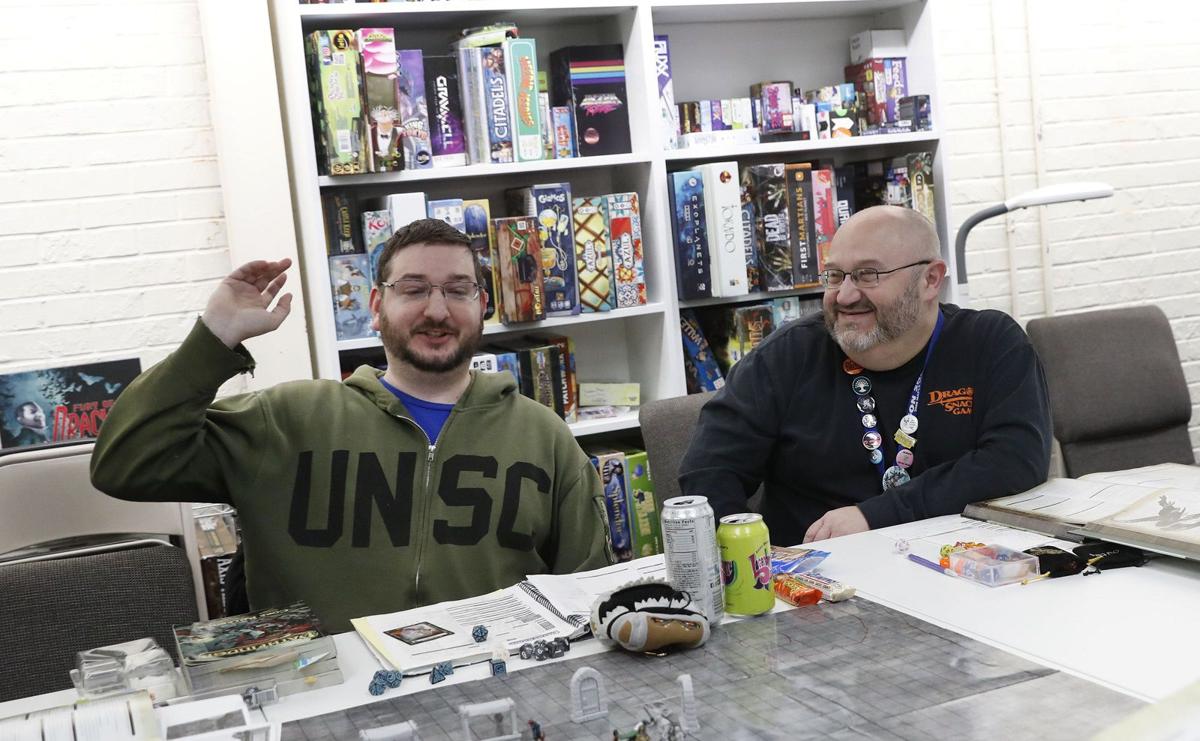 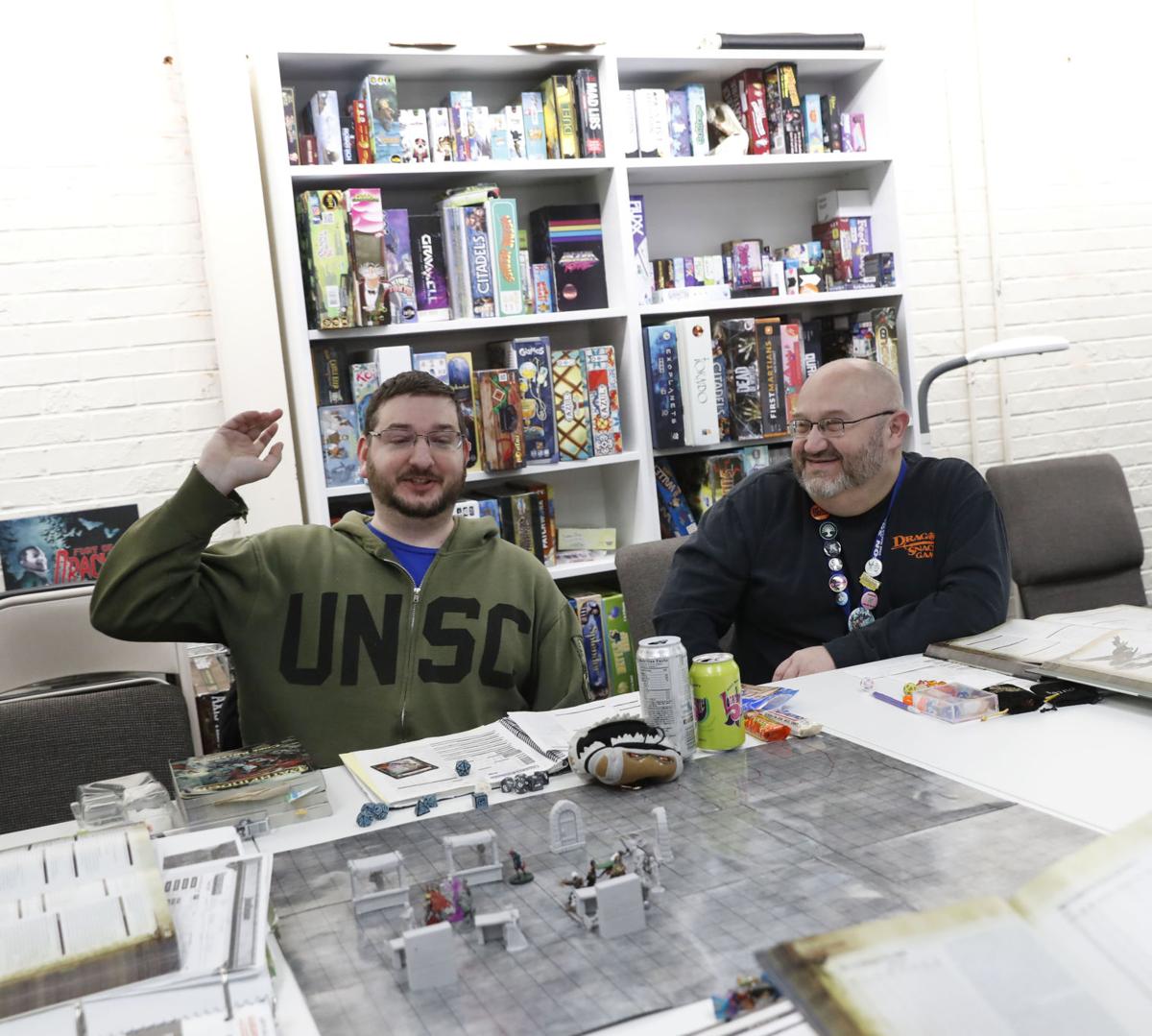 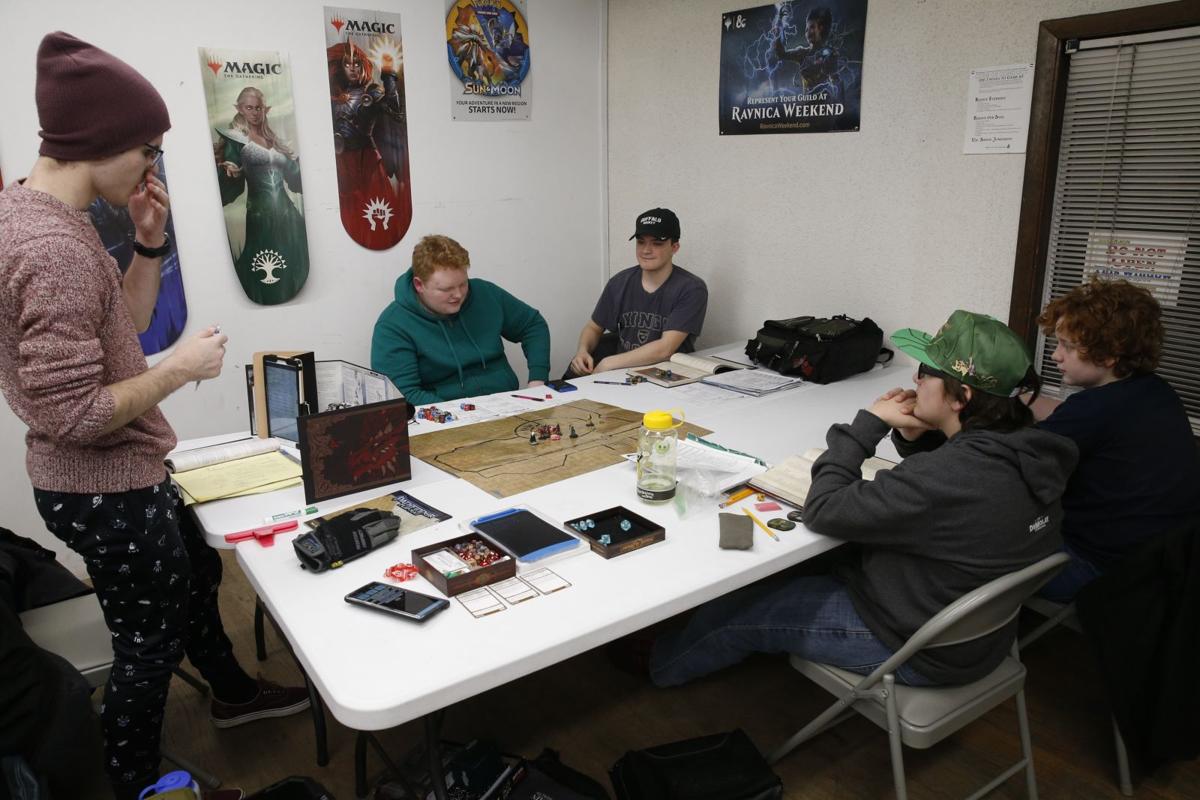 Dungeons and Dragons is one of the most popular table top games played at Collector's Inn in Kenmore. (Robert Kirkham/Buffalo News) 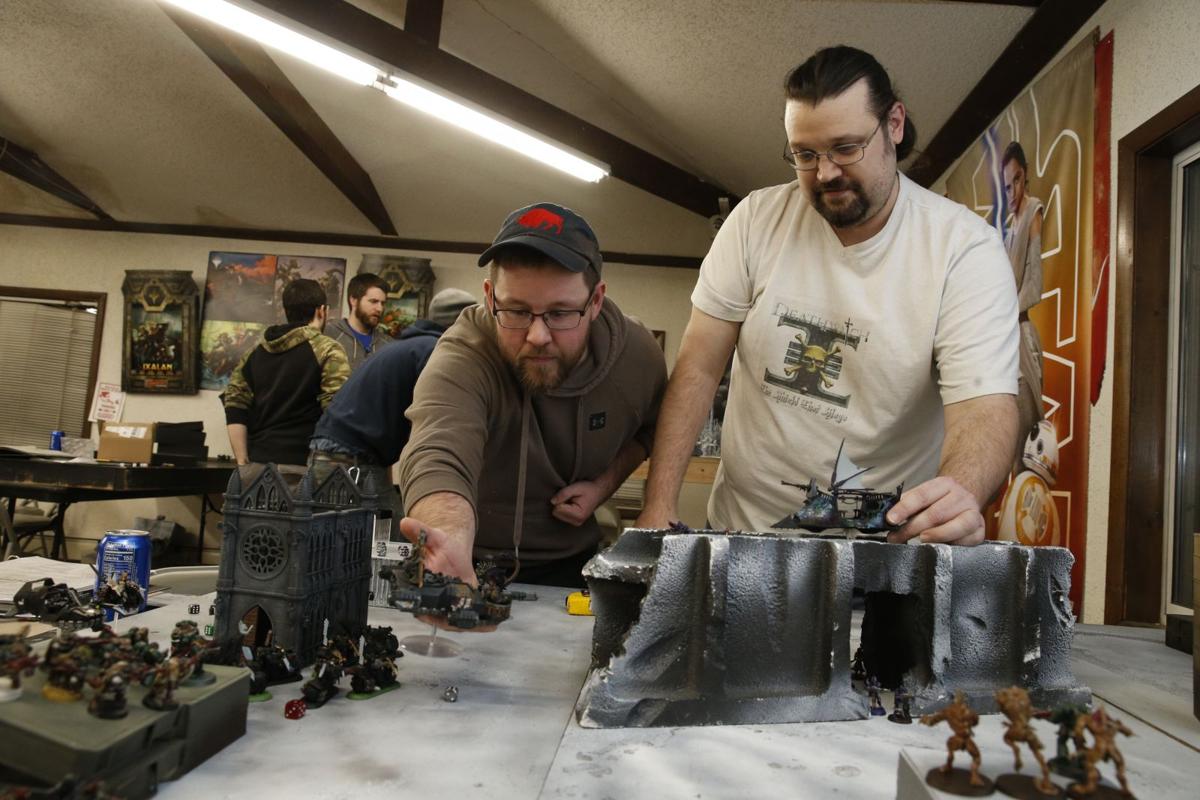 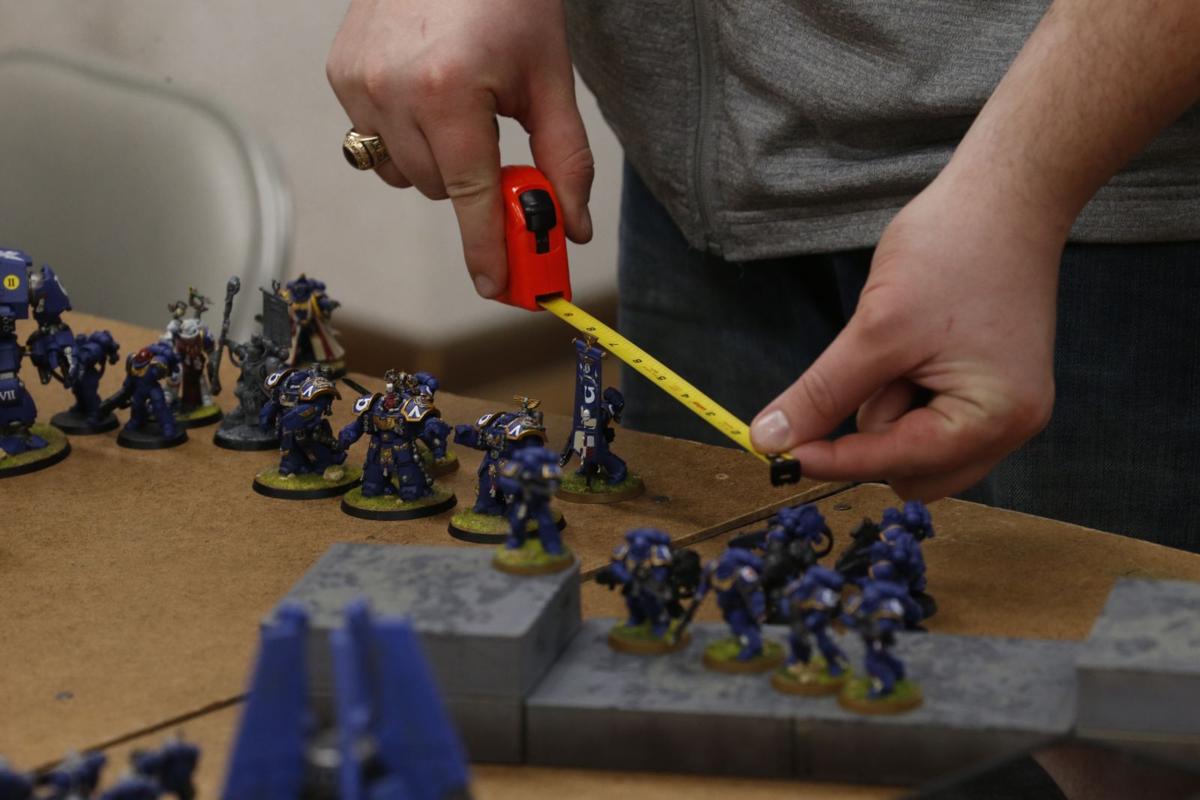 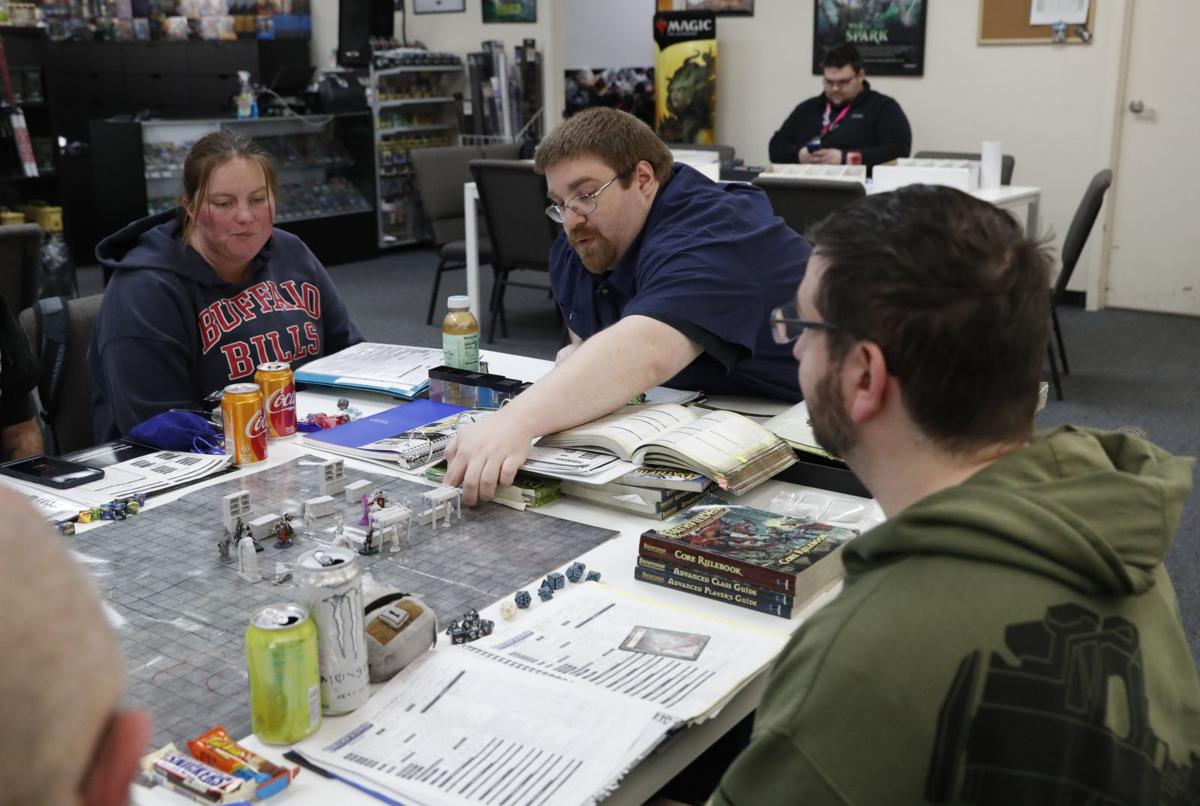 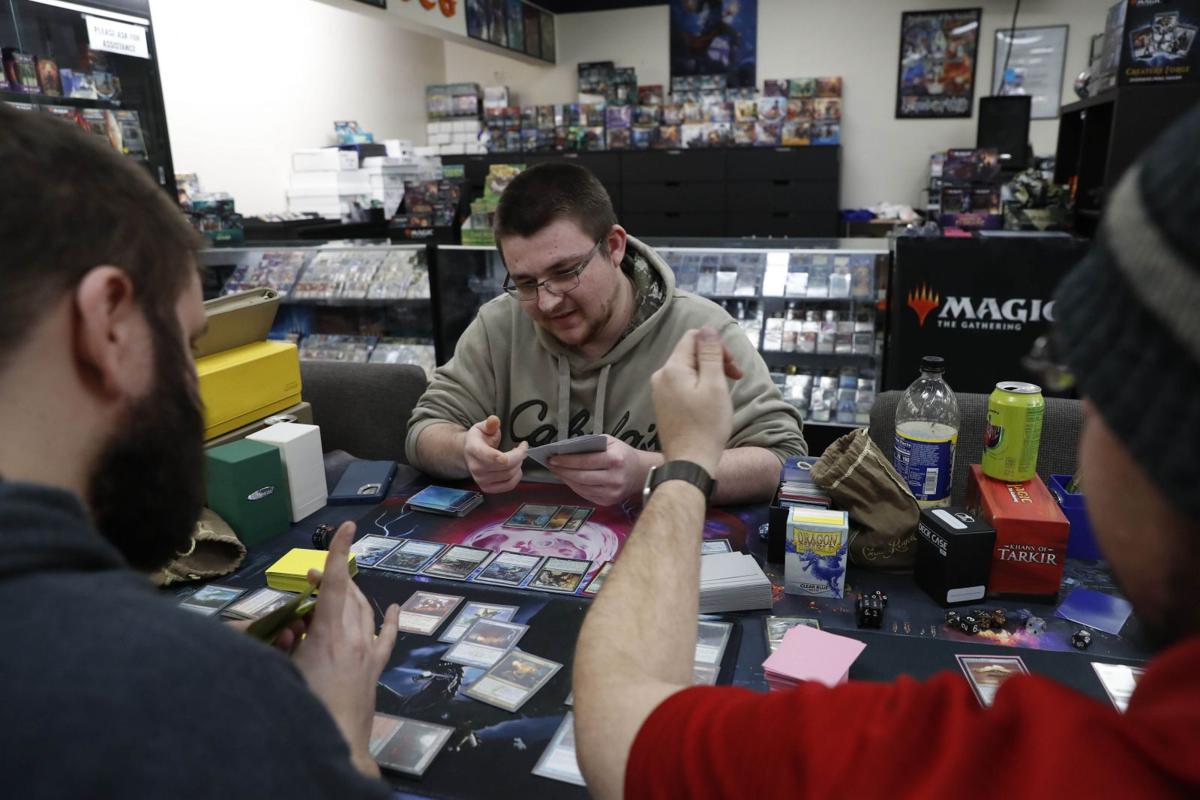 Every month for three years, five friends have walked into Dragon Snack Games in Amherst to become other people.

They are playing Shadowrun, a science-fiction role-playing game set in the near future. Each player has designed and created their own characters, and now determine their actions based on a story developed by another friend, who is the Game Master.

There are no digital screens or wireless controllers; just books, paper, pencils and dice.

"Being online is awesome in meeting people all across the world, but you're not in the same room together," said Depew’s Michael Porpigilia of the appeal of role-playing games, or RPG. "You act differently when you're together, and you can see their face. Plus, we're doing something different every week. There's only so much you can do in a video game."

Shadowrun is one of a number of tabletop games, along with card and traditional board games, that continue to grow in popularity. These games are diverse in genre, rules and play, but they share a common social trait that they all require people to get together in the same room around a table with friends for fun and relaxation.

Wired reported that sales of tabletop games quadrupled between 2013 and 2016, and references in fan-favorite shows like "Parks and Recreation" and "Stranger Things" have increased the awareness of the culture. The type of complex games that were once looked down upon, have become a regular activity for people of all ages to gather for an inexpensive social night.

The resurgence of tabletop gaming has economic benefits for the area as well, as several game/hobby stores have opened or expanded over the past few years. Dean Smith, owner of Dragon Snack Games, has been into gaming since he was a boy. He previously owned a store in Mount Morris for six years, but moved closer to his family in Buffalo and opened his business about a year ago. His first favorite game was Dungeons & Dragons, a fantasy RPG.

"Dungeons & Dragons is the 800-pound gorilla of role-playing games," Smith said. "It got many people into gaming."

Joe Loveric, owner of Collector's Inn on Delaware Avenue has seen the rising popularity of D&D in the Buffalo area. "The Buffalo market is strong," Loveric said. "Dungeons & Dragons specifically is more popular in the Buffalo area and I continue to see it grow."

Collector's Inn, opened in 1983 and owned by Loveric since 2012, hosts open board gaming and events almost daily, with customizable card game Magic: the Gathering a big part of its business.

Johanna Shaflucas of Amherst loves tabletop games as an excuse to invite her friends over to her house for a fun weekend night.

“It’s one of the few times that my friends and I can actually get together, eat an abundance of snacks, laugh and truly catch up on each other’s lives,” she said. “It also allows my competitive spirit to come out, particularly against my husband.”

The popularity of board games ranges from classic games including Scrabble to modern titles like Catan, which has players competing for resources, land and armies. Card games include customizable ones like Magic: the Gathering or adult party sets like Cards Against Humanity. Strategy games of war and miniatures include Warhammer, Axis & Allies and HeroClix. Within all of these are numerous original and licensed properties. If you're starting out, it's easy to become overwhelmed walking into your neighborhood store, so ask an associate for some tips and guidance.

"I can help people decide pretty easily what they would like and would not like," said Jason Gough, owner of Casual Dragon Games in Lockport. "There's no one game out there that everyone in the world likes."

In addition to selling games, many of these stores also have regular game nights where people can come in and play at a table with others. During one recent Monday night at Dragon Snack Games, the five men playing Shadowrun enjoyed the camaraderie and the snacks.

Marv Hill of Buffalo, an employee of Dragon Snack Games, said he enjoys Shadowrun so much that he sticks around to play in his off hours. Darren Neverth of Orchard Park is the latest recruit to the game, starting about a year ago and now getting his friends to play.

"I was always into nerdy things, but I couldn't find a (tabletop game) that hit," Nevereth said. "I got into Warhammer and Magic: the Gathering, but it wasn't my thing. I started doing this, and it reminded me of split-screen video gaming when I was (younger), but more interactive."

Store owners Smith and Gough opened their businesses because they love the hobby. Gough grew up playing games like Survive, Cosmic Encounter, Illuminati and Dungeons & Dragons.

"I've been a gamer for a very long time," he said, adding as a game designer it fit together to open the store. "I play it all and enjoy it all."

Gough has been a part of the tabletop gaming community for a long time and said it's been one of the most welcoming groups that he's seen.

"It gives a lot of people a place to come out and play with (others) instead of playing video games by yourself," he said. "I've seen a lot of friendships develop from meeting and playing games here."

Many area stores have a variety of game nights. Contact the store to get a complete schedule.

Alan Pergament: Steve Levy's history of covering the Bills goes back to his days at Oswego State

The experience of being a stringer on Bills games had a big impact on the longtime ESPN broadcaster's career.

'It's not helpful': Jonah Hill asks fans not to comment on his body

"I know you mean well but I kindly ask that you not comment on my body," he wrote to his 3.1 million followers.

Katey Sagal, known for playing Peggy Bundy on “Married... with Children,” was hospitalized after a car hit her while she was crossing an L.A. street.

Magic: the Gathering is a popular card game played at spots like Dragon Snack Games on Maple Road in Amherst. (Sharon Cantillon/Buffalo News)

Dungeons and Dragons is one of the most popular table top games played at Collector's Inn in Kenmore. (Robert Kirkham/Buffalo News)