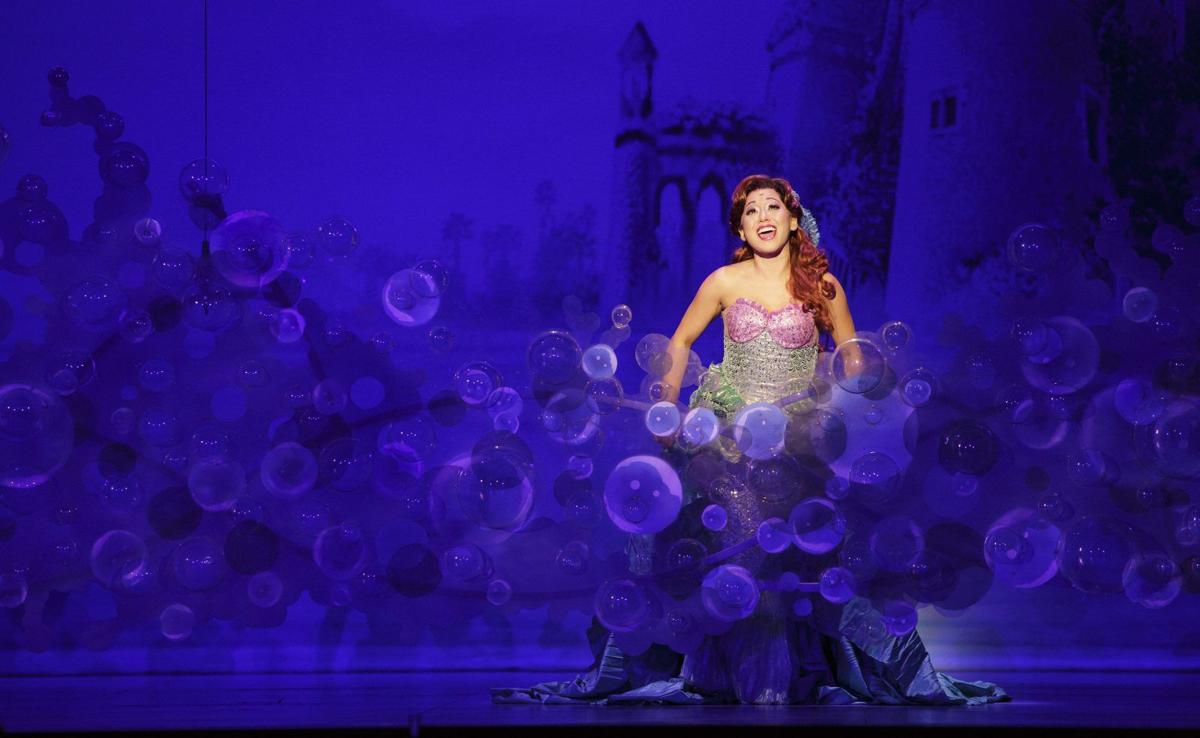 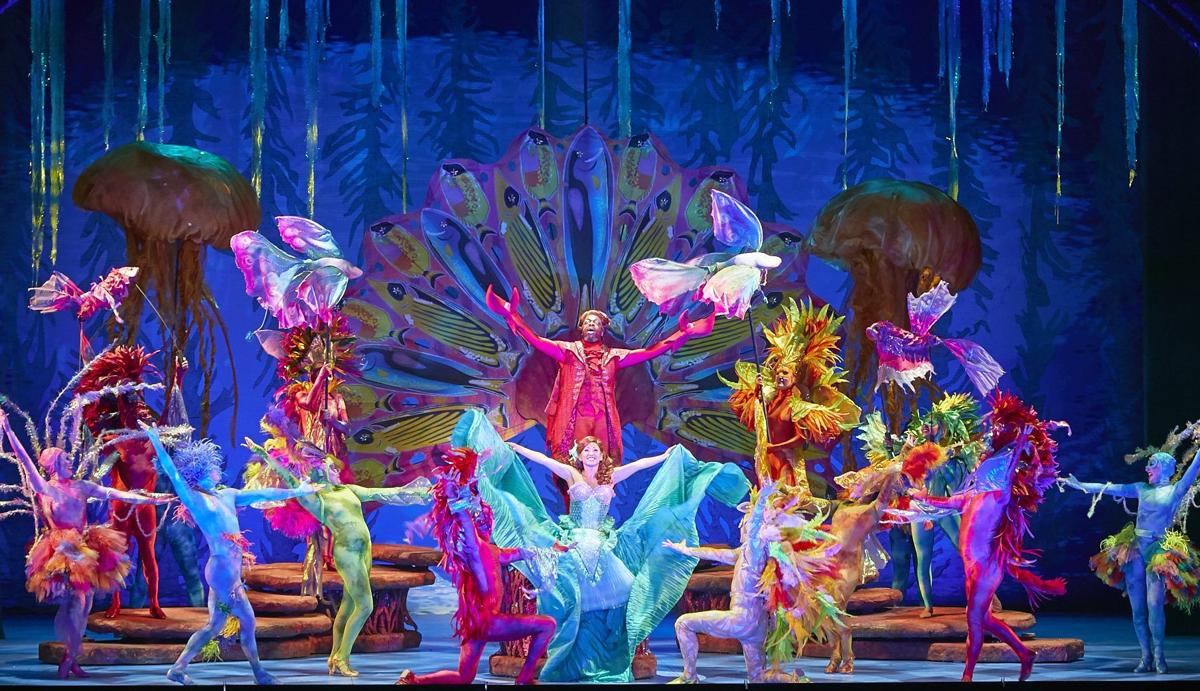 Diana Huey doesn't seek out negative social feedback. But too often, it finds her.

That's what happened one recent day in Memphis, where Japanese-born Huey was set to perform the role of Ariel in a touring production of "The Little Mermaid" at the historic Orpheum Theatre.

Before the show, scrolling through Facebook, she came across outraged comments from Disney fans criticizing the casting of an Asian-American in a role they expected to be played by a white woman. That's despite the fact that the character is based on an animated film featuring a mythical creature who cavorts with singing crustaceans.

"It's hard not to take it personally," Huey said in a phone interview from Nashville in advance of the tour's visit to Shea's Performing Arts Center from Aug. 15 to 20. "I had kind of a funky first part of the show and I was like, how do I get out of this? I can't let that affect me."

Since the tour began in Seattle in November, Huey has come across plenty of negative comments about her casting in the show. She's brushed most of them off.

But the tone and frequency of those comments intensified, she said, when the tour made its way to the South.

In Memphis, Huey powered through the show, trying to put the comments out of mind and drawing on her love for Alan Menken's music and her belief in the power of the story to inspire young viewers. It's unlikely that audiences detected any missed beats.

Still, for Huey, the words she read on Facebook stung.

Reeling from the experience, she made a visit to the National Civil Rights Museum in Memphis, which helped her put her own struggle into perspective.

And more relief came for Huey on the next tour stop in Nashville, when a young Asian girl and her adoptive mother approached her after the show.

"The mom pulled me aside and said, 'The second I saw that you were playing Ariel, I just burst into tears for the sake of my daughter being able to see that,' " Huey said. "Seeing a little Asian girl in a place where there aren't a lot of Asians, it reminds me how important it is to say diversity matters and being open-minded matters and equality matters. If I have to take the brunt of it every now and again, I will."

In more cosmopolitan regions it might be surprising that Huey's casting as Ariel would raise any eyebrows at all. That has been the incredulous reaction of "Mermaid" director Glenn Casale, who said he cast Huey in the role for one simple reason: She was the best singer.

"She was a good actress, she was the right age, she sings it like nobody else," said Casale, best known for directing Cathy Rigby in "Peter Pan." "We probably saw 50 Ariels, and Diana really sang it the best."

Squeaky Wheel Film and Media Art Center Executive Director Maiko Tanaka, who is Japanese Canadian, had a similar response when asked to comment on the controversy.

Tanaka phrased her response in the form of two questions and a terse statement: "1. Can she sing? 2. Can she dance? 3. It's a friggin' mermaid."

Casale said he attributed the blowback over Huey's casting in the role to a vocal minority who feel increasingly emboldened to express racist ideas.

"It started in Seattle a little bit, and I've been on the phone with a lot of people around the country" discussing the casting choice, he said. "A lot has changed since this (presidential) election. People are allowed to speak their minds now."

One journalist from a southern publication, he added, asked him how it felt to be "saddled" with a non-white actor in the role of Ariel. "Saddled?" he responded, "I cast her!"

As the push for diversity increases at American theaters led by progressive directors, communities across the country are responding to casting decisions with varying levels of acceptance.

On Broadway, "Hamilton" has set a new standard for casting shows with actors who reflect the diversity of the country. And while there has been criticism from some about the musical's use of black actors in the roles of America's founding fathers, the show's record box office receipts speak to the public's embrace of such casting decisions.

The Shaw Festival, in Niagara-on-the-Lake, Ont., has fully embraced nontraditional or "colorblind" casting, in which actors of color frequently play characters that might traditionally have been played by white actors. Its current productions of "The Madness of George III," "1837: The Farmer's Revolt" and others employ this casting. And audiences hardly blink.

"What we've tried to do is diversify the company and by doing that the roles are open to a more diverse pool," said Shaw Festival Executive Director Tim Jennings. "For us, and I think for most theaters in the states and Canada, we're looking to not limit who gets access to our roles. If there's a great actor out there who hadn't been given access before, give them access and see what they can do with it."

As for the blowback Huey has been receiving, Jennings said that critics of the casting choice "just need to broaden their brains a little bit."

The issue also arose in Casale's production of "Beauty and the Beast," which featured a black actress, Nikki Reneé Daniels, in the role of Belle. He also noted that he has helmed two Japanese productions of the show, in which the entire cast was Japanese. Few there seemed to mind that Ariel did not precisely resemble the cartoon.

"We all just have to know that we made the right choice," Casale said of Huey's performance as Ariel. "And for all those people who don't like it, what I would say is, look at the children who are Asian who say to themselves, 'My God, I could do that one day.' "

Huey knows those children exist, and thoughts of them are what carry her through her toughest days on tour.

And besides, Casale said of the musical's tentacled villain, "Ursula's blue. Should we talk about that?"

This season, each Sabres player was offered the opportunity to choose their own “biscuit in the basket” anthem.

Alan Pergament: The Bills will get a fortune in the next TV contract. That will have no effect on stadium talks

“The national revenue share that has made the NFL great and sustainable for small markets does not translate into what we need to make a new stadium competitive in Buffalo,” Pegula Sports and Entertainment executive vice president Ron Raccuia said.

Who was Halyna Hutchins, the director of photography killed by prop gun?

The film industry has been left shocked and in mourning after cinematographer Halyna Hutchins was killed on set when Alec Baldwin discharged a prop firearm.

Jeff Simon: In praise of cop and crime shows, the comfort food of a TV diet

Prop guns: What they are and how they can kill

Even when there is no "bullet" in a prop gun, there are still projectiles, including gun powder and gas that can be dangerous within a certain range.