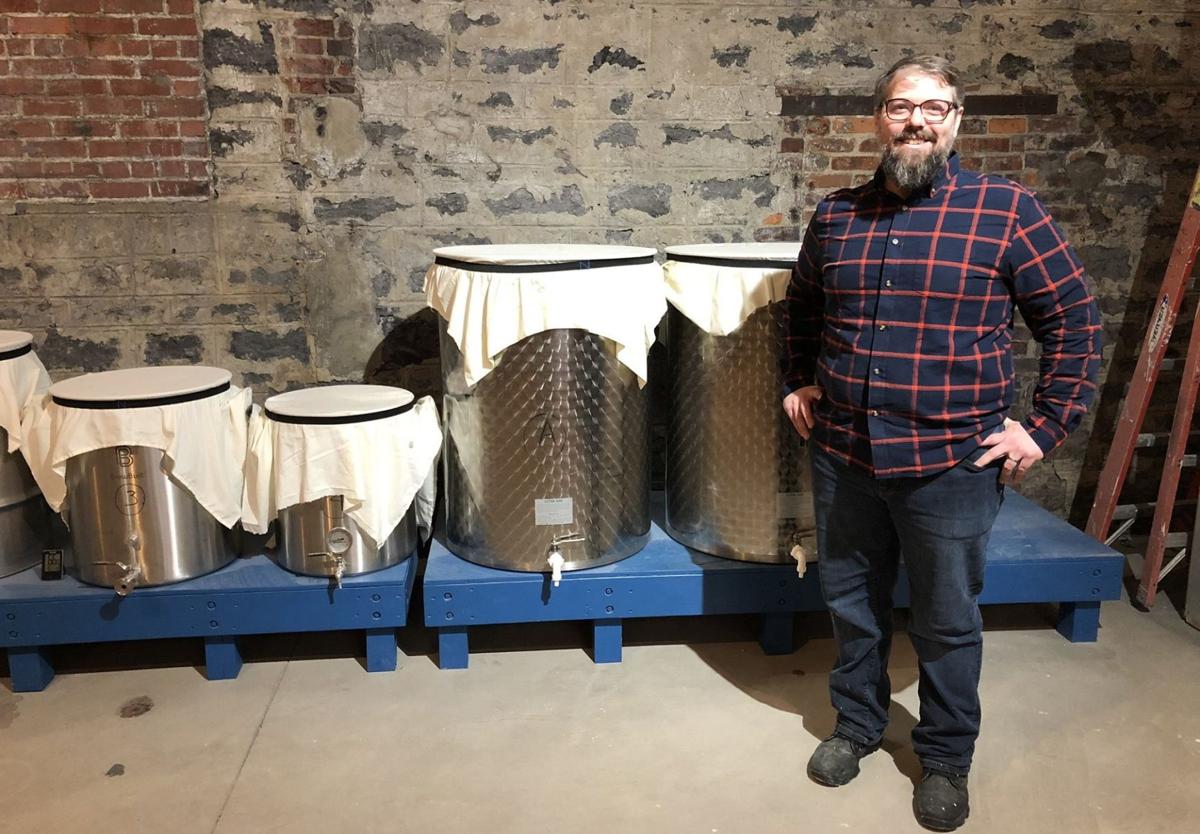 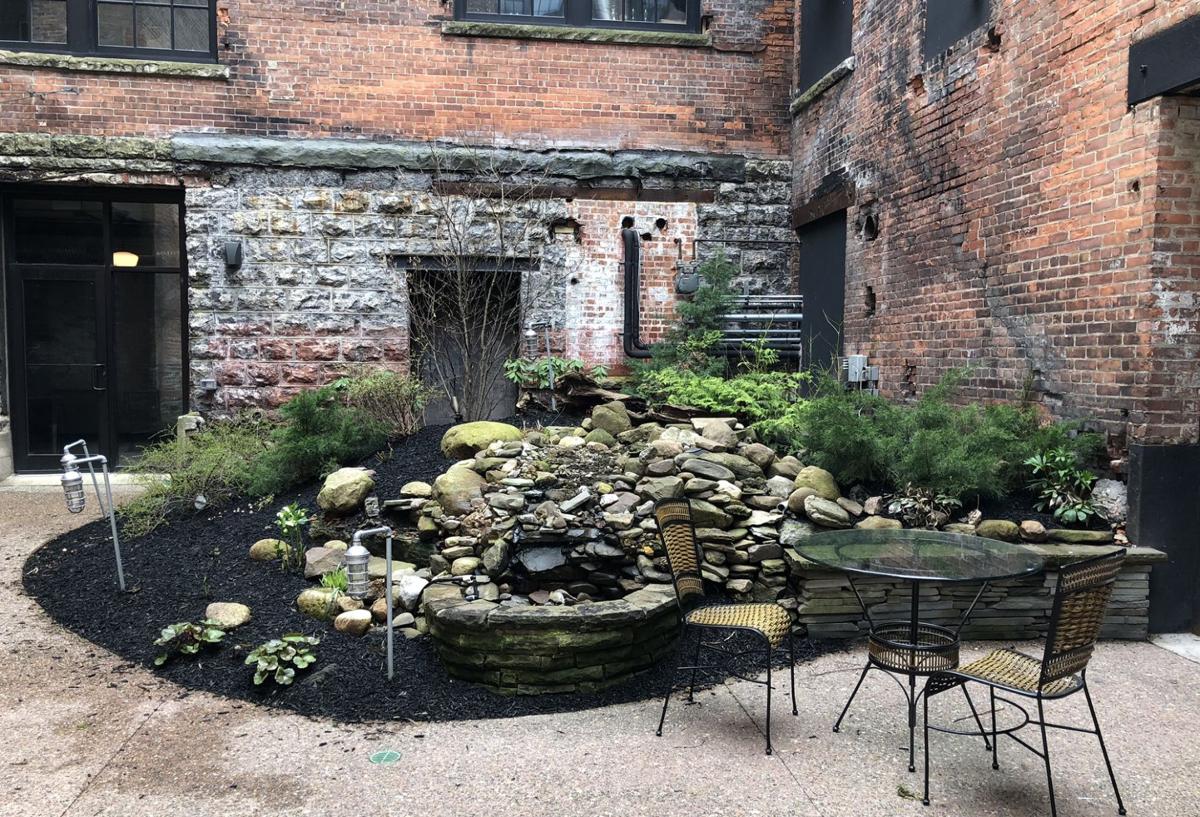 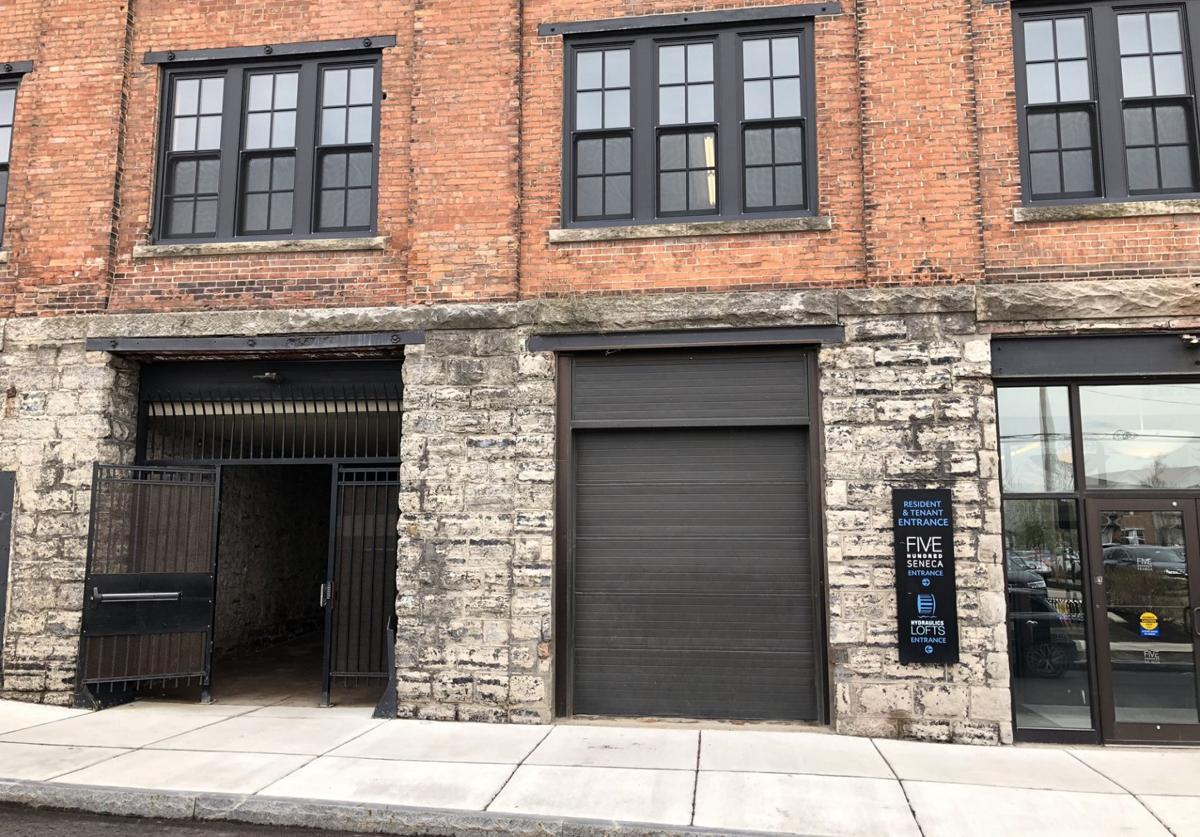 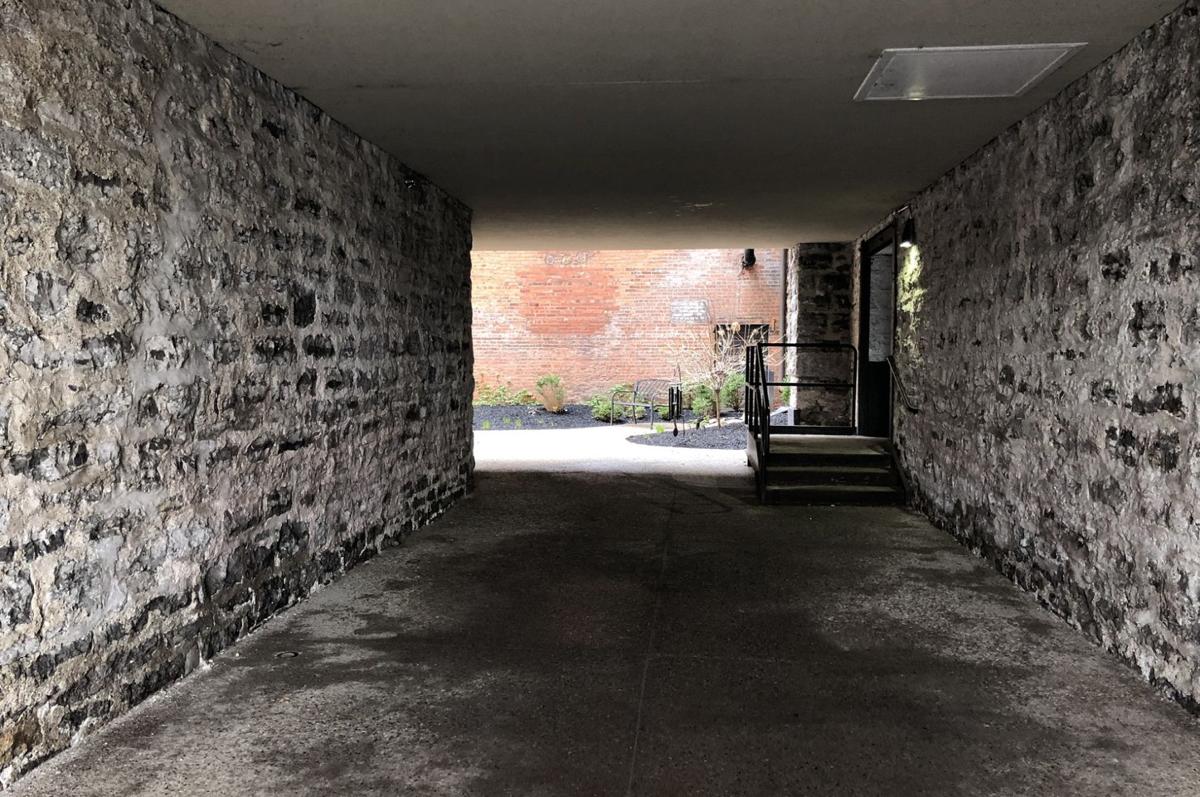 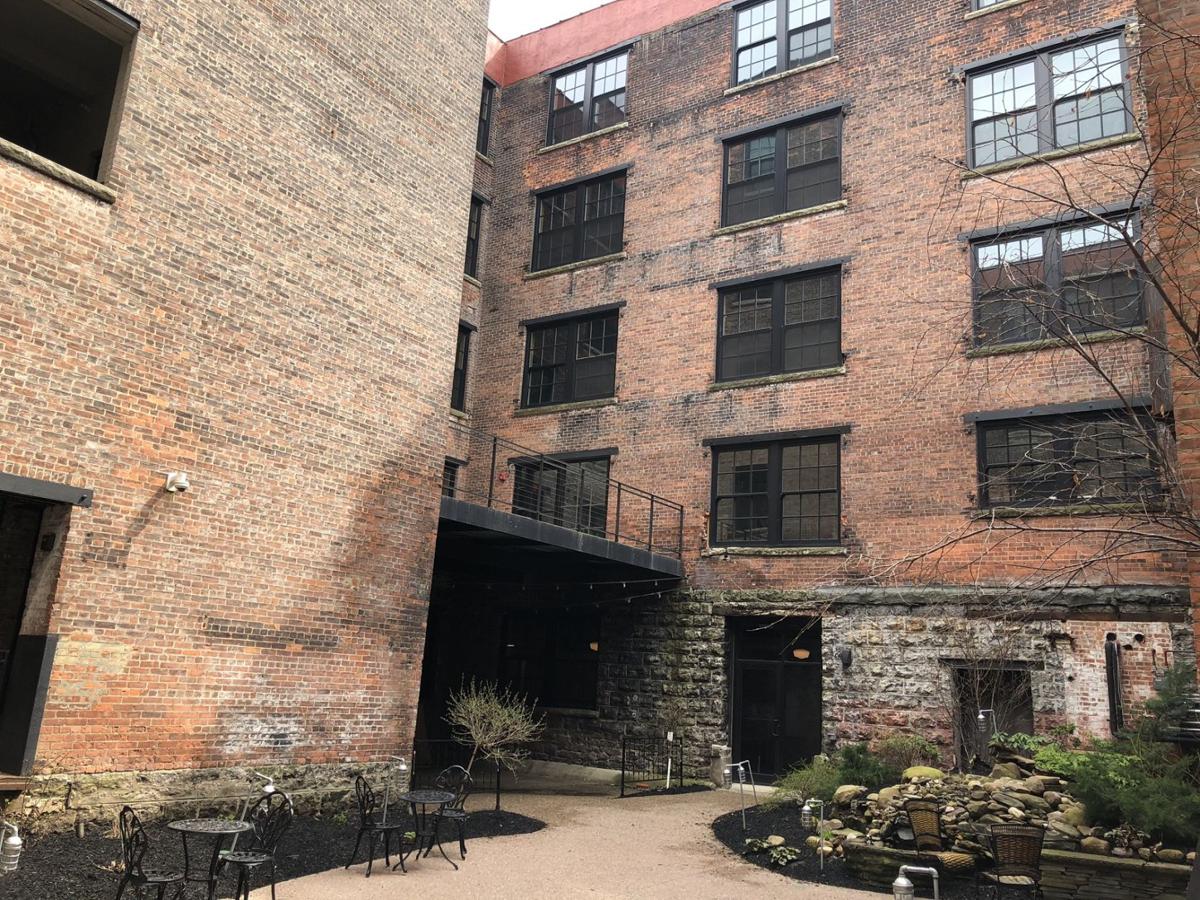 The unfinished bar at Big Norwegian Kombucha, pictured in February. It will look significantly different when the taproom opens Saturday. (Ben Tsujimoto/Buffalo News)

Finding Big Norwegian Kombucha isn't yet an easy task, but founder Andy Bannister calls it a transformational experience, for your sense of adventure and - maybe - for your health and well being.

An iron gate, soon to be adorned by a Big Norwegian sign, opens from Myrtle Avenue. Inside is a small tunnel, then a gorgeous courtyard surrounded by the towering brick walls of 500 Seneca and enlivened by ornate landscaping and quaint outdoor seating.

Inside an adjacent garage door sits the taproom of Big Norwegian Kombucha, which will open to the public from noon to 4 p.m. May 4, with five varieties of kombucha to sample and buy. Wall art will be done by Bannister's wife, Marissa. Her father crafted the taproom's bar. In the rear is an open look at the kombucha production, a six-barrel brewing system.

Bannister's approach has three prongs: taproom sales, a presence at several farmers markets each week and retail distribution in kegs.

The 1,600-square-foot taproom in the sprawling 500 Seneca, a Savarino Companies undertaking, is joined by several other new businesses such as massage-chiropractor Phoenix Rising, the busy doggy day care Animal Outfitters, seafood restaurant Dobutsu, wine purveyors Winkler & Samuels and others, producing a cool climate for small businesses to coexist and support each other.

Kombucha is a fermented tea-based beverage hailed for its probiotics, or microorganisms from live bacteria and yeast, which 'bucha backers believe can do anything from easing gastrointestinal problems to soothing mental health issues.

"[Kombucha] is about replenishing your gut, keeping your gut health," said Bannister, who is well-read on his product but not a medical professional. "There's research showing the vagus nerve [that connects] the gut and the brain, where anxiety, stress, stuff is choking between the gut and their mind. Opening that path is a big part of what kombucha is trying to do, and it's up to us to set the tone."

The beverage's health potential shines as an alternative to soda which, given his upbringing in the blue-collar First Ward, is meaningful to Bannister.

"The premise I always try to keep is making kombucha for everybody, it's not a swanky beverage," he said. "[In the First Ward], I went to School 4, so half of our school was from the projects. Many families in the projects now have been displaced, but they were hit by diabetes and poor nutrition. We have half of the city that's basically ignored, so there's potential there to do some good."

Bannister, who still helps set up for the Shamrock Run, a First Ward tradition, estimated that there will be roughly six grams of sugar per serving, roughly one-fifth of a can of pop. He sources his tea from an organic and fair-trade tea supplier out of California.

Controversy and mystery still surround the beverage, which dates back thousands of years to China but has boomed in the last 20 years in the U.S., with a lack of controlled studies and significant data to support the health claims, Time.com noted.

Because of the fuzzy intel, there's plenty of skepticism and myths surrounding kombucha. Bannister said some customers who have heard of but never tried kombucha believe it's made from mushrooms. Others believe it contains substantial alcohol. When he first tried kombucha, in 2013 at the Lexington Coop, Bannister anticipated a drink that would taste like iced tea.

The flavors are not reminiscent of fungus or tea, and the drink won't give you a buzz or even a caffeine high. Instead, kombucha flavors are mold-able through several factors including added flavors, typically fruit and herbs; the fermentation environment; and the tea (either green, black or a blend).

Bannister will debut with five flavors in the taproom, three from black tea (ginger hibiscus, black cherry vanilla and pomegranate citrus) and two from green tea (blueberry lemongrass and a green tea base). A flight of five samples is $5, 32-ounce growler fills cost $9.50 and 64-ounce fills cost $16. Physical growlers can be purchased in 32-ounce size, for $3.

Big Norwegian's loyalty program is $56 and includes a 32-ounce growler and eight fills.

Ten taps have been set up, so expect the selection to widen. Bannister noted a collaboration with Bison Botanics in Kenmore to try to work cannabidiol (CBD) oil into his bottles of kombucha. It's unlikely that would be available in the taproom.

[Related: Kombucha with cannabis extract is off to a strong start]

Big Norwegian's opening comes at an opportune time in respect to worldwide trends. The Los Angeles Times dug up statistics for global kombucha sales, which were at $1.06 billion in 2016, with projections soaring to $2.5 billion by 2022. Those numbers suggest high demand and thus opportunity, even in Buffalo, which typically isn't first to major trends.

The local 'bucha battleground has roared more in distribution than in taprooms, but even that's about to change, with both Barrel + Brine's Chandler Street location and Big Norwegian set to open this spring.

Bootleg Bucha, now under the umbrella of Buffalo Fermentation, was the first to make noise in the Buffalo marketplace and now distributes along the East Coast, with Snowy Owl Kombucha, for which Bannister was an original partner in 2015, following shortly thereafter in the Barrel Factory.

"Everyone is pushing to get a piece of the market, and it's a growing market," said Bannister, who added there's yet to be a sense of camaraderie among kombucha owners. "But all in all, we're [vying] for a finite group of people."

INFO: Big Norwegian Kombucha, 500 Seneca St. (enter through Myrtle Avenue gate, north side of the building). 504-1551. Hours will initially be weekends only, but will expand to weekdays.

Pour Taproom is open as Buffalo's first self-serve bar. How does it work?

The no-bartender concept taproom opened this week in the former Caberet on Pearl Street.

"Just about everyone who has been to Chris’ – or enjoyed its takeout – has chosen a favorite over the years," writes Andrew Z. Galarneau.

The unfinished bar at Big Norwegian Kombucha, pictured in February. It will look significantly different when the taproom opens Saturday. (Ben Tsujimoto/Buffalo News)