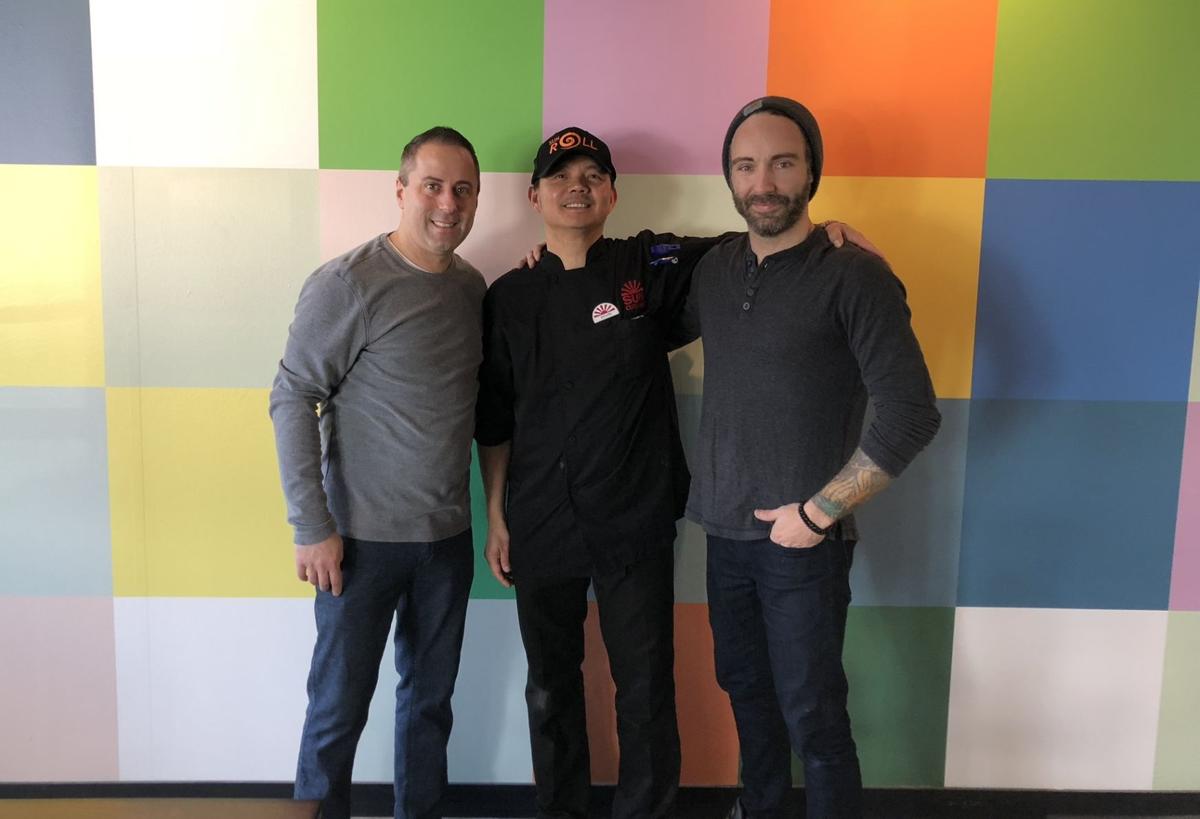 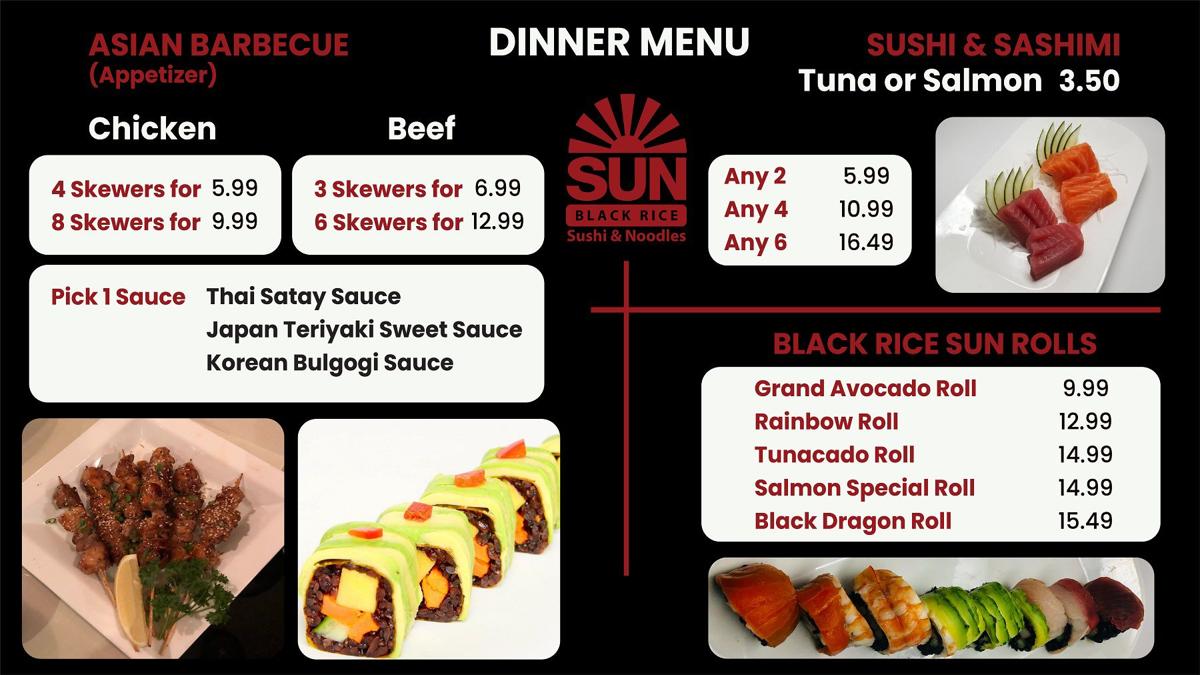 Asian barbecue selections, left, are new to Sun's menus. Scroll to the bottom of the page to see the rest of Sun's menus. 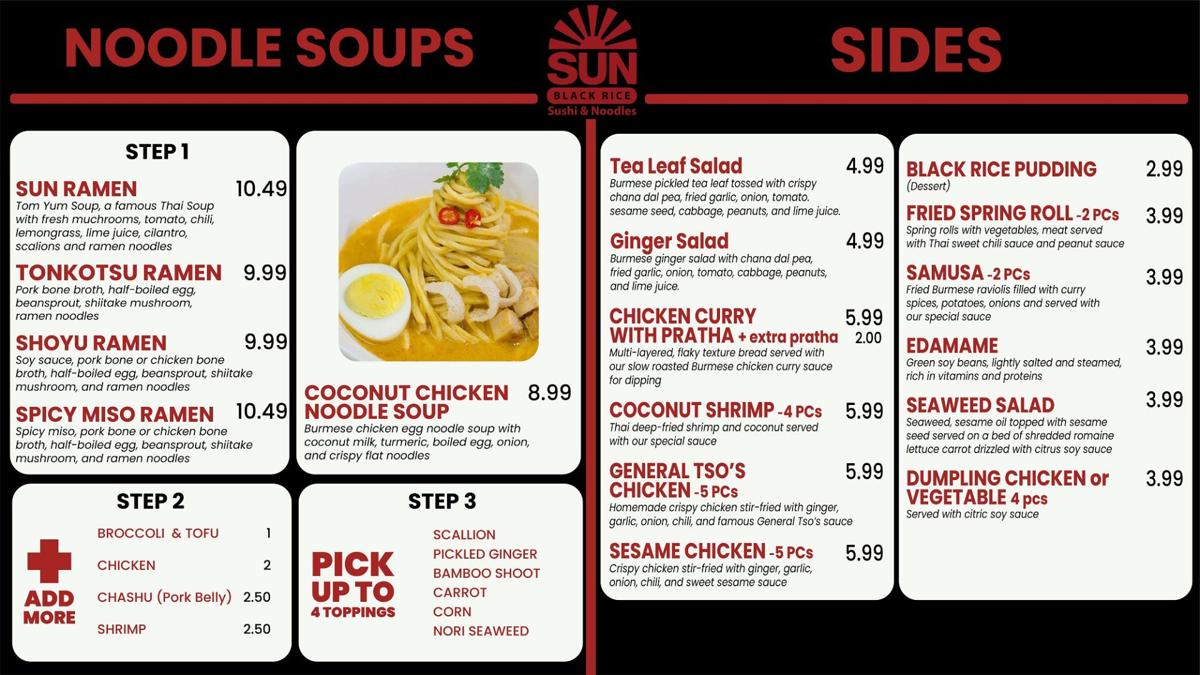 Another page of Sun's menu. 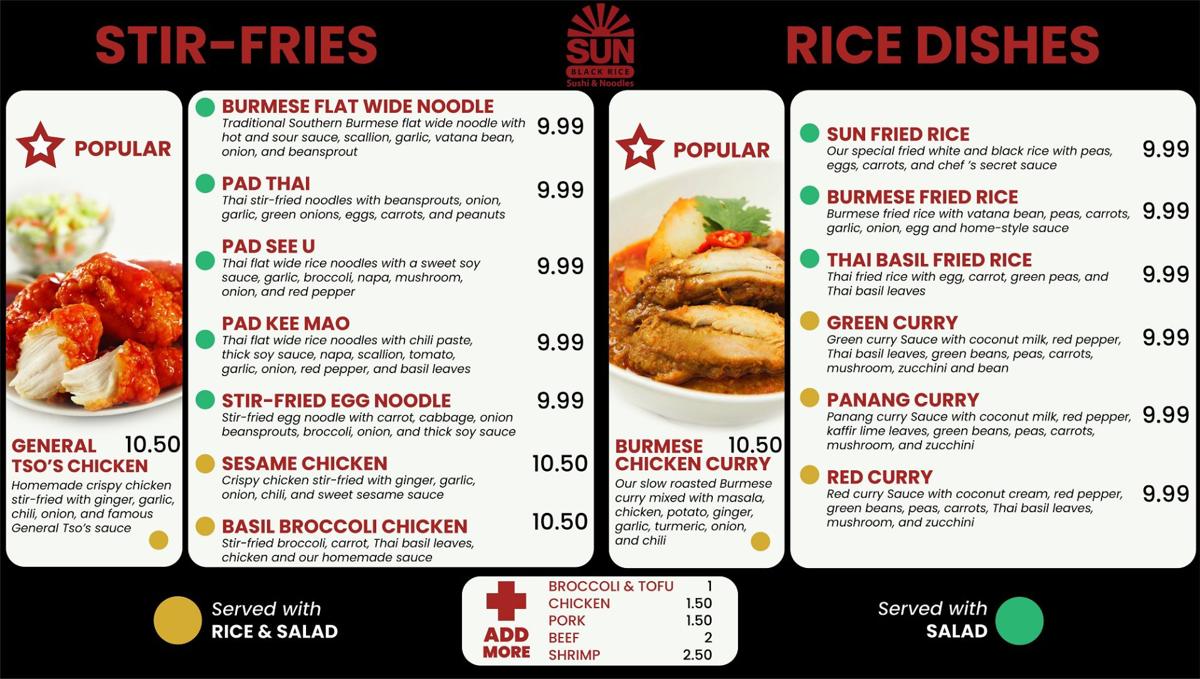 The menu for Sun in PK Eats. 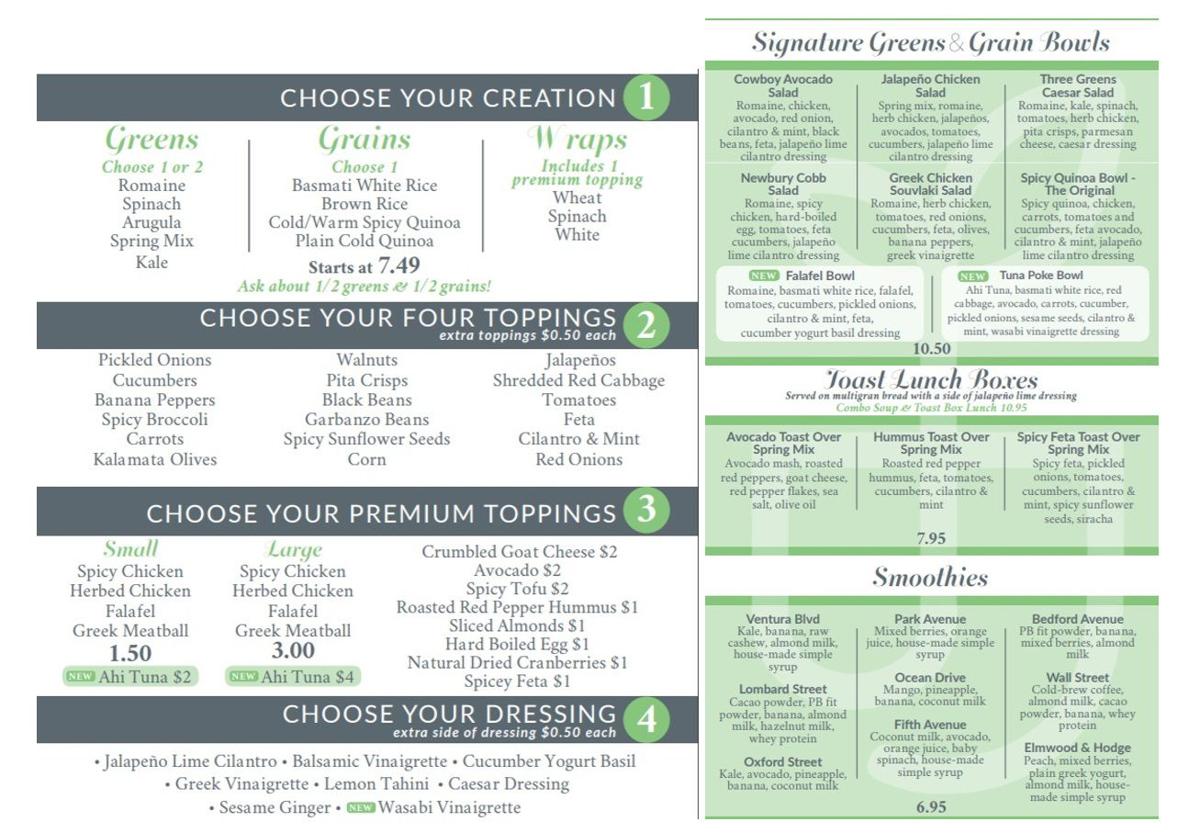 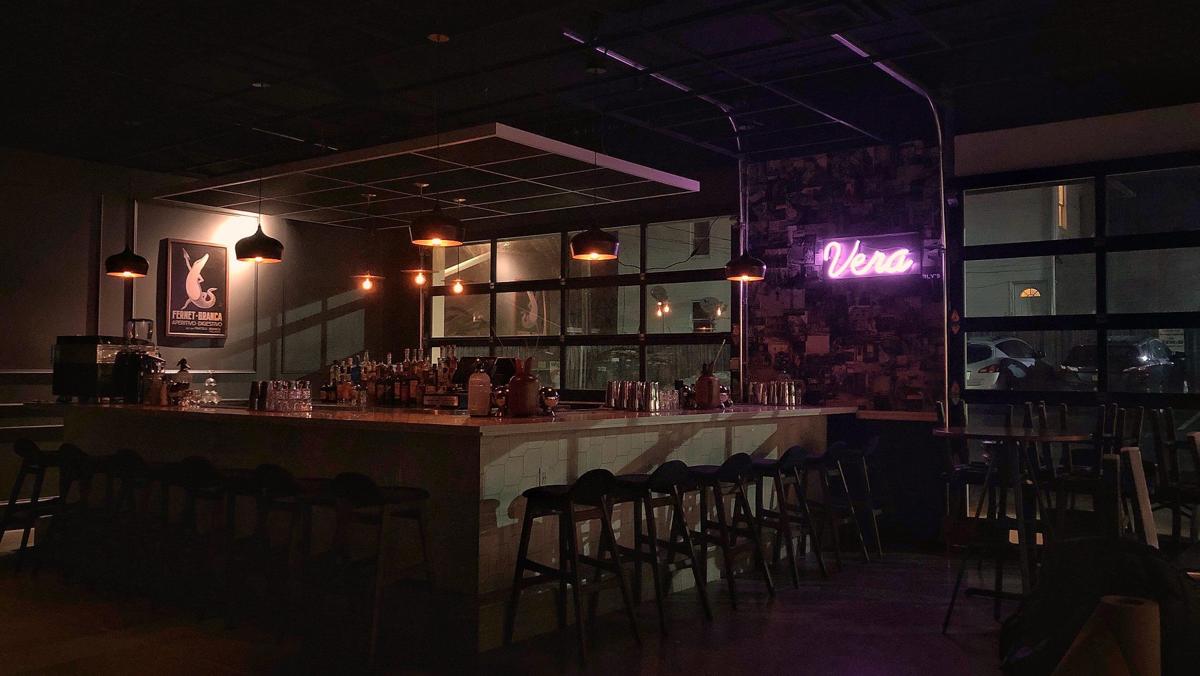 The lights are out in Vera, less than two months after opening. (Cameron Rector) 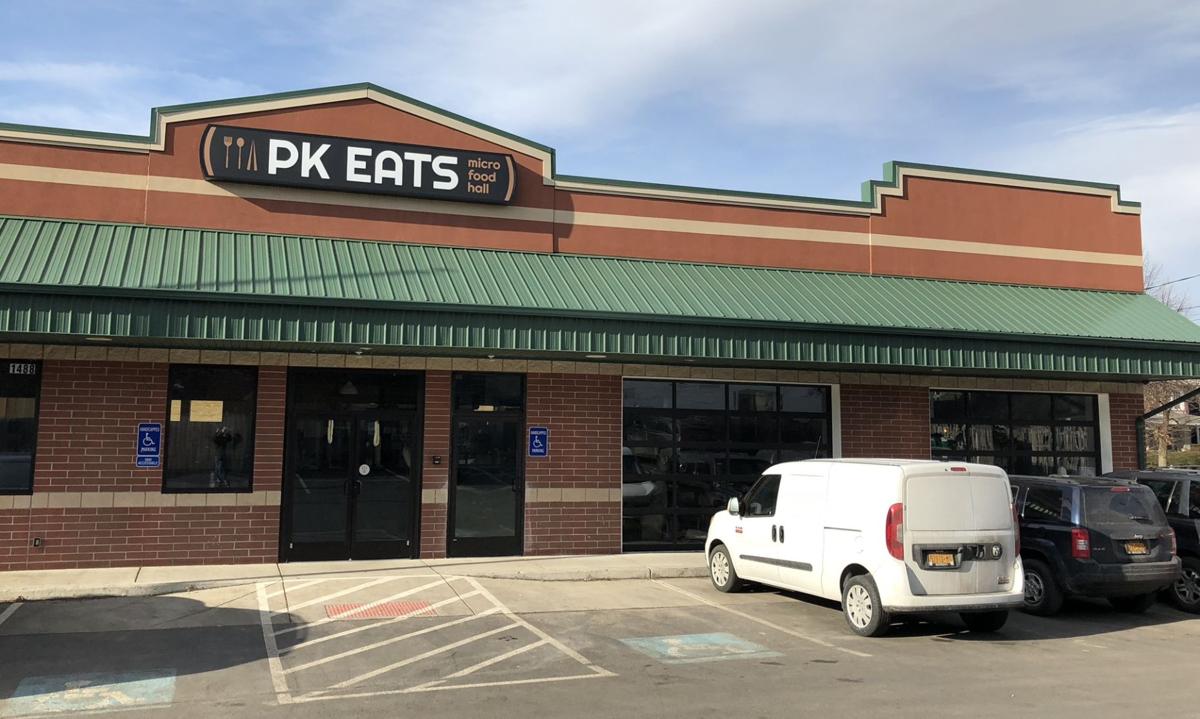 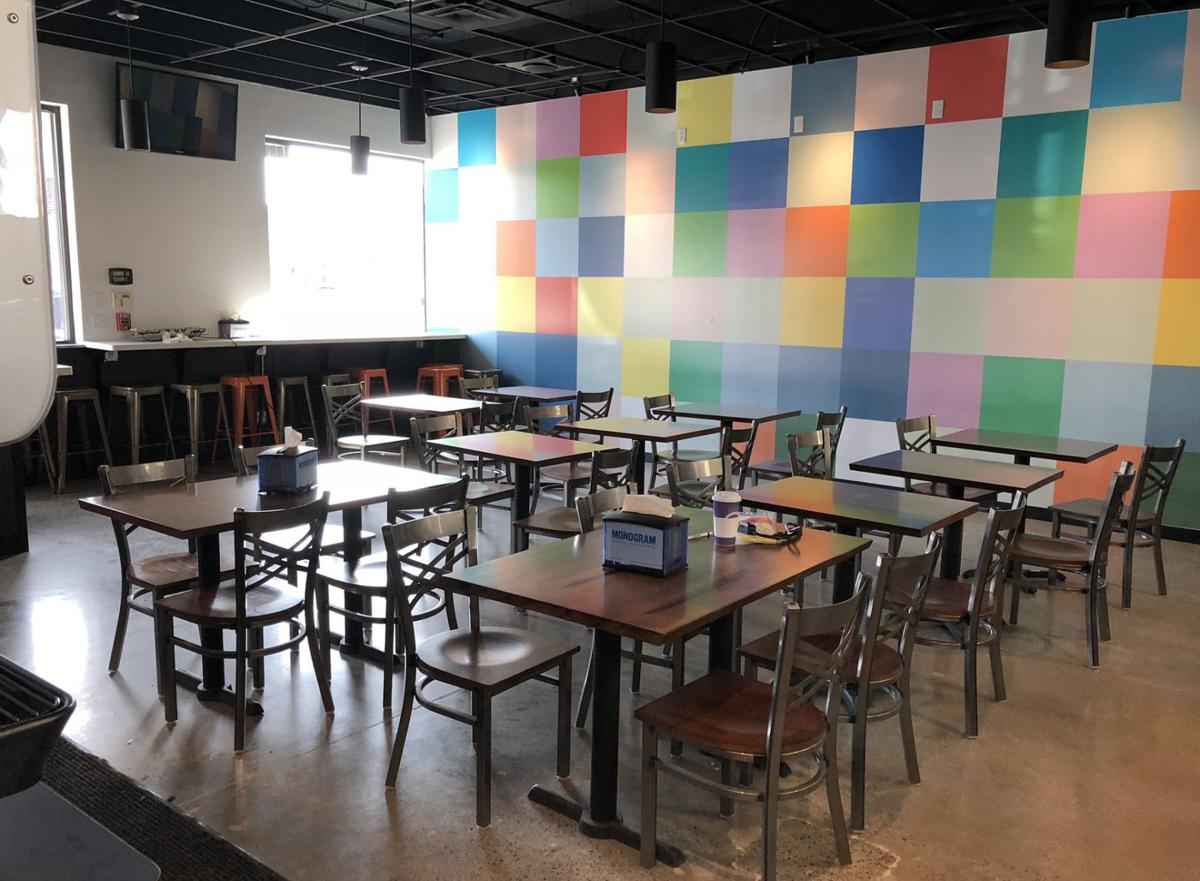 Half of the communal dining area in PK Eats, with the colorful wall as a backdrop. (Ben Tsujimoto/Buffalo News) 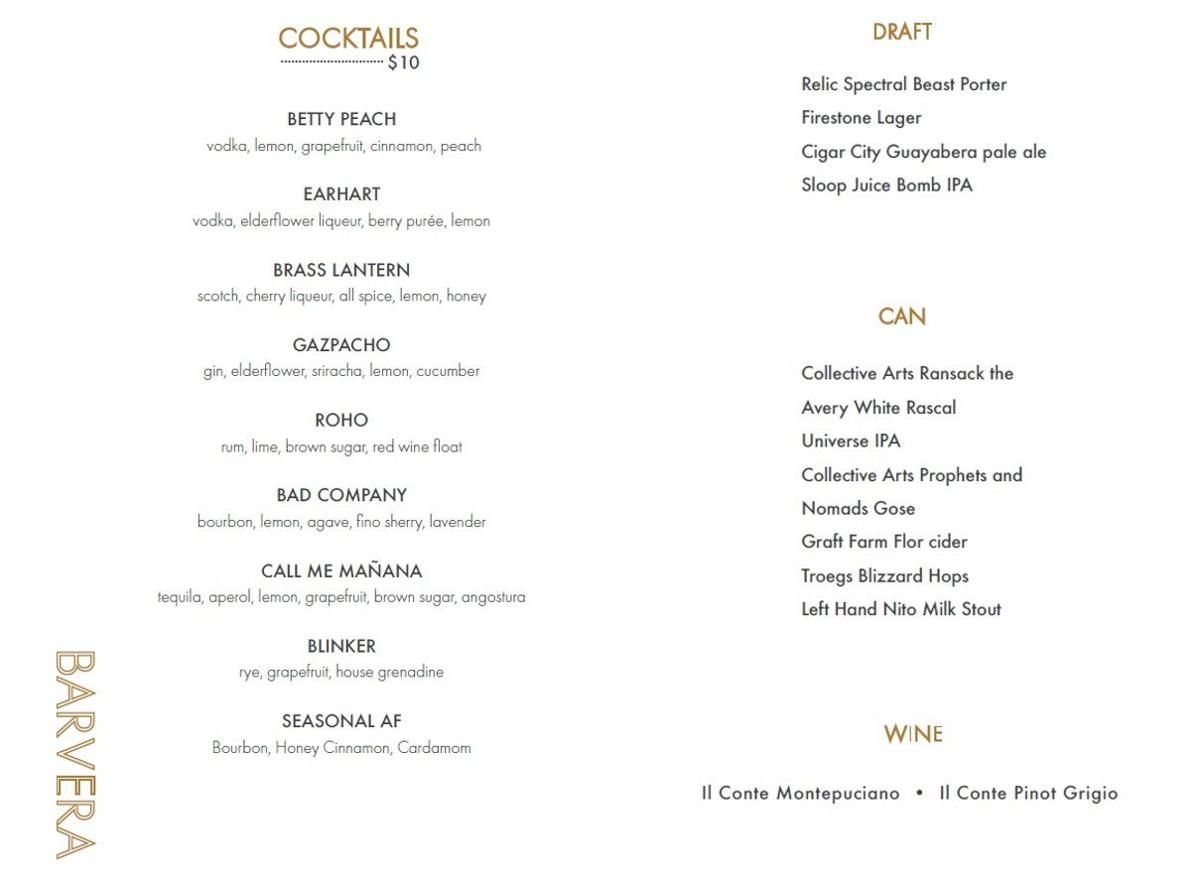 barVera's cocktail and beer menu for the January opening.

Micro food hall PK Eats, at 1488 Hertel Ave., has announced a grand-opening party for Jan. 11, as vendors Newbury Salads, Sun Cuisines and barVera have created a unified experience that weaves together pan-Asian fare, healthy options and a polished cocktail program.

The PK Eats project was developed by Newbury Salads owner Paul Tsouflidis and Sun Cuisines' Kevin Lin, who boast food hall experience at EXPO Market, on Main Street downtown. Conceptually, the duo agrees on a fast-casual approach augmented by quality fare, and both aim to franchise in the future, so a joint effort in a bustling North Buffalo neighborhood made sense.

Late in the development process, Vera Buffalo owner Cameron Rector was asked by Tsouflidis to join PK Eats, and Vera opted to shutter its Lexington Avenue location last weekend as a result. The craft-cocktail pioneers in Buffalo will shift their home base to Hertel.

PK Eats' seating is communal, with two large eating areas, with two- and four-tops, divided by a pour-your-own non-alcoholic drinks station, with open kitchens to allow a peek into meal preparation. Twelve stools grace barVera's area to start, although cocktails and other beverages may be consumed anywhere in the room, fitting nicely into PK Eats' connectivity.

Rector explained the allure of PK Eats from the standpoint of customer experience.

"When I go out to eat, I don't want just one thing," he said. "[Here] I can have a smoothie, a bangin' salad and pad Thai. I want to have all of those things. And then I can have an awesome cocktail to go with it all. It's all of these different flavors in one spot, with all these different experts doing their thing the best."

By its January opening, PK Eats will boast Bebot, a new-age, in-house ordering system that will connect the menus of Newbury and Sun and text when orders are ready. Online orders will be accepted through Toast POS with a separate line for pick-up, and meal delivery services such as Skip the Dishes will be available.

One perk that separates PK Eats from EXPO is parking, as approximately 30 spaces are available - accessible from entrances on Hertel and Sterling - until a patio, expected to seat roughly 30 customers, is built out by spring. Once outdoor seating is complete, parking spaces are expected to number around 25, Tsouflidis said. At the northeast side of the building, barVera will have a walk-up bar window for patio customers.

The eye-catching southern wall - featuring colorful panels - will be graced by peel-back photos to "send a certain message" each month, Tsouflidis explained. Female empowerment, specifically in politics, will be January's focus; customers are welcome to take selfies in front of the display.

PK Eats will have a soft-opening phase, beginning at 4 p.m. Dec. 19, but hours and offerings will be limited until the official grand opening as the trio of businesses finds its footing. Hours are 11 a.m. to 10 p.m. during the soft opening.

Saturday and Sunday brunches, with one special menu uniting all three businesses in addition to the regular offerings, are planned. Here are a few things to know about each of the businesses in PK Eats:

Basics: Owned by Tsouflidis, who also runs Acropolis on Elmwood and Crush Hospitality. Newbury Salads also has a presence in EXPO Market, with a Williamsville spot in the works, too.

*The formula for Newbury Salads is simple: fresh, non-genetically modified ingredients are used in their salads, smoothies and soups, with build-your-own salad bowls - from roughly $8-$12 - accounting for more than half of the business. Signature salads are available as well.

A $5 special on Tuesdays features 32-ounce salad bowls with four toppings and a housemade dressing.

*All Newbury locations are adding a greater Mediterranean influence to its menus, with falafel and Greek meatballs introduced to the menu.

Basics: Lin began with Sun Buffalo, at 1989 Niagara St., with his wife Stephanie, then expanded to Williamsville and a small spot in EXPO Market. At PK Eats, Sun will be open late-night on weekends to complement Vera's bar service.

*Like in his other restaurant ventures, Lin will prepare a litany of Asian dishes, spanning Japanese, Chinese, Thai, Burmese and Korean, all of which can be prepared fresh and fast. The menu, below, is broken into skewered meat, black rice sushi made to order, noodle dishes, fried rice and stir fries.

Lin explained that he tries not to deviate too far from traditional preparation, but he throws in some of his own twists as well as more Americanized options.

*One element that will be new to Sun fans is the presence of skewered meat - either chicken or beef - with a choice between three sauces: Thai satay sauce, Japanese teriyaki sweet sauce (Yakitori, typically on chicken) or Korean bulgogi sauce, umami-heavy with a touch of sweetness, usually accompanying beef.

*A Burmese native, Lin spent his late 20s at a restaurant in Tokyo, Japan, working his way up from dishwasher to sous chef over a span of four years before moving to the United States.

Basics: Rector opened Vera Pizzeria in 2011 on Lexington Avenue in the Elmwood Village, quickly proving a craft cocktail bar could survive in Buffalo. Dec. 15 was the final day of operation for Vera's first location, with Rector and his bartenders now focusing efforts exclusively on PK Eats.

*Why did Vera close its Lexington spot? "We just needed a change, needed a move," Rector explained. "This opportunity came up and I wanted to expand, build and grow, and I haven't been able to. This will allow us to do that."

*Cocktails will rotate seasonally like they did before, with favorites such as the Earhart and Betty Peach remaining consistent. There's no shortage of past concoctions to choose from: Rector detailed the "Vera Bible," a collection of several hundred cocktail recipes that are now "Moleskine notebooks rubber banded together, stained, with pages falling out," that will one day become a leather-bound book.

*Hard-to-find craft beers on draft, an espresso machine, local coffee bean sourcing from Three Stories Coffee and more freedom to create day drinks - Rector says he makes a "kick-ass Bloody Mary" - will be new to barVera. Given Vera's previous hours, Rector has been limited in his cocktail creation.

*Rector was adamant that the Vera vibe at PK Eats is similar to that of its first location.

"That was my favorite thing about Vera - I would have some of the highest-profile businessmen - lawyers, judges - sitting at my bar next to my tattooed, pierced, freaky friends, and they're having drinks together, they're now talking to each other and it's like - the cocktail is the tie, it's tying them all together."

Asian barbecue selections, left, are new to Sun's menus. Scroll to the bottom of the page to see the rest of Sun's menus.

Another page of Sun's menu.

The menu for Sun in PK Eats.

The lights are out in Vera, less than two months after opening. (Cameron Rector)

Half of the communal dining area in PK Eats, with the colorful wall as a backdrop. (Ben Tsujimoto/Buffalo News)

barVera's cocktail and beer menu for the January opening.