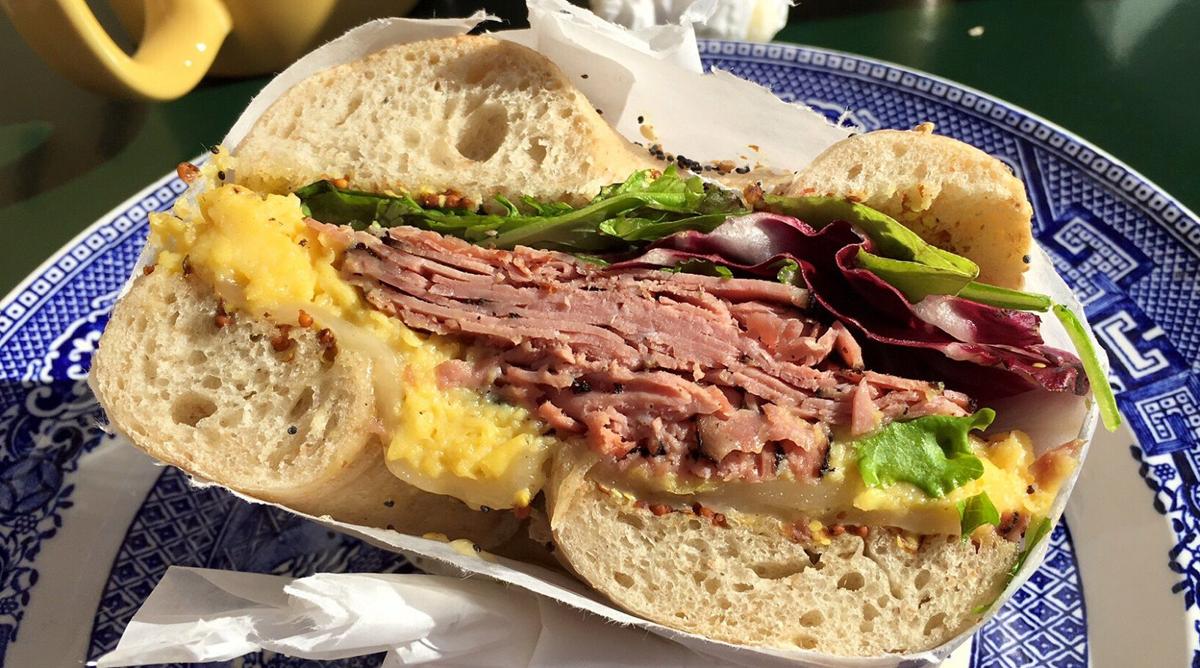 The Courtney ($6) was topped with pastrami, eggs, Swiss cheese, greens and mustard. (Nick Guy/Special to The News) 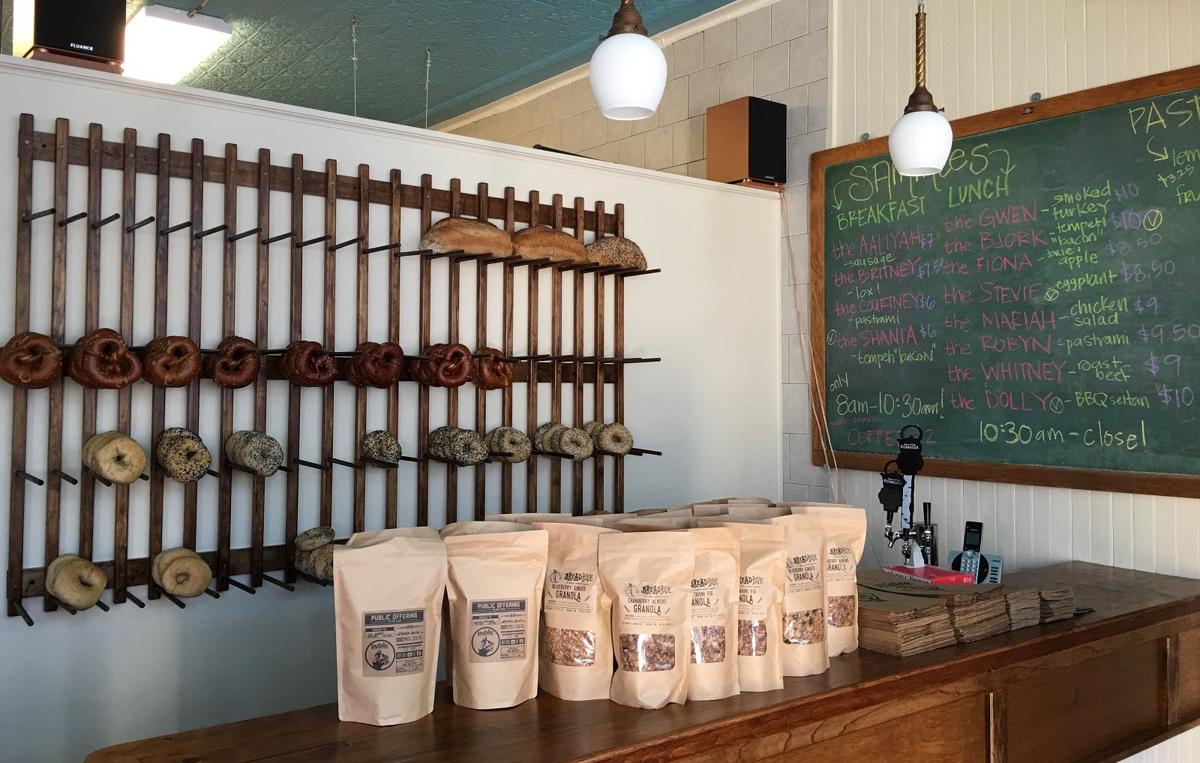 The wall rack of bagels in BreadHive impressed a Boston Globe writer. (Nick Guy/Special to The News) 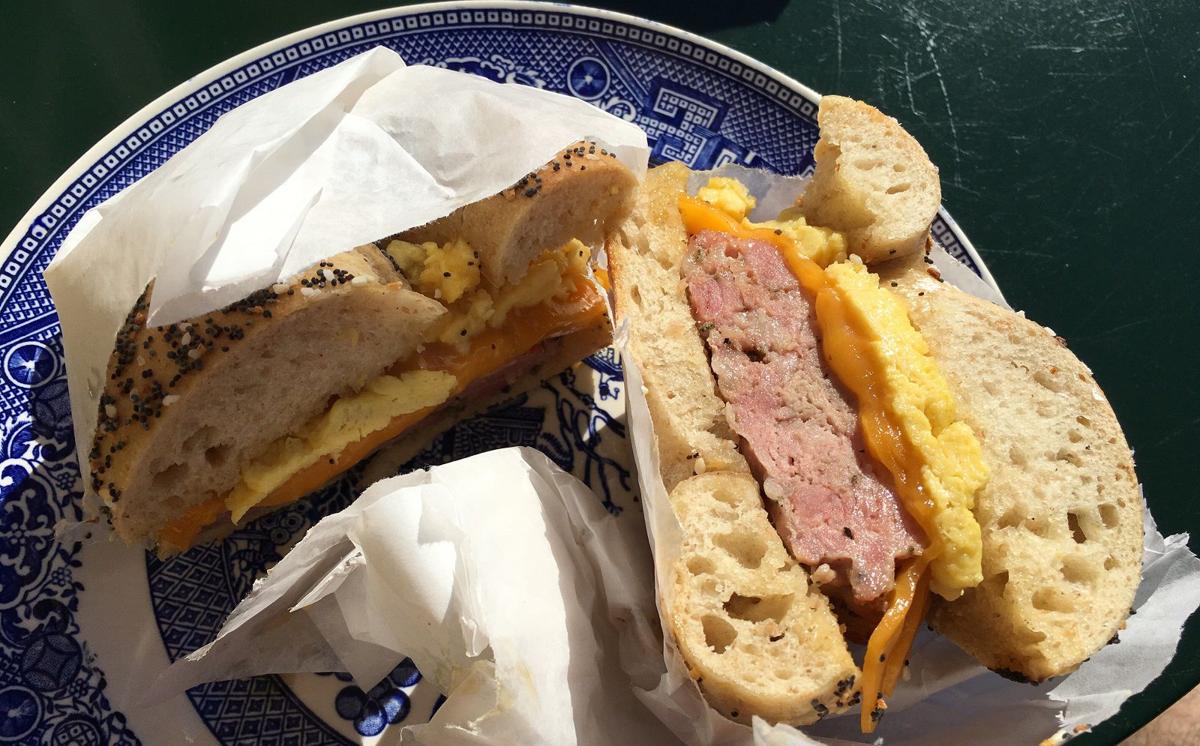 The Aaliyah sandwich has breakfast sausage and maple butter. (Nick Guy/Special to The News) 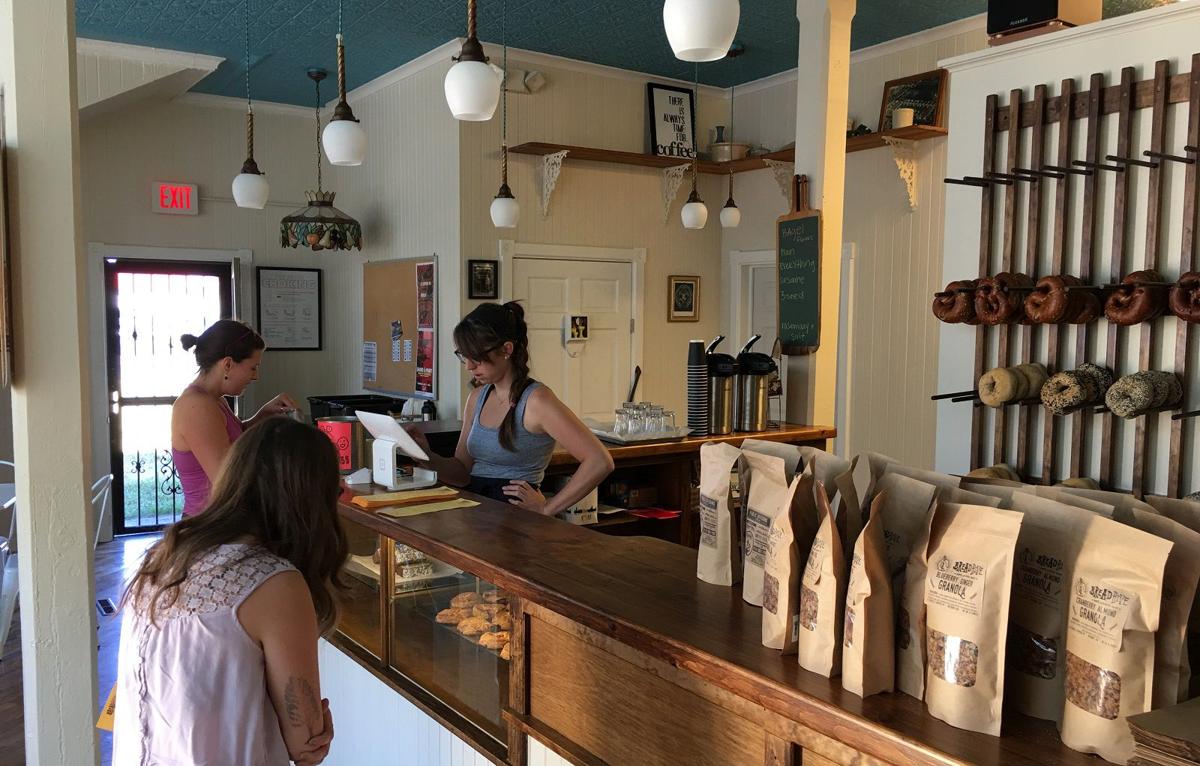 Near the cash register of BreadHive Cafe on Connecticut Street. (Nick Guy/Special to The News)

BreadHive Cafe is housed in what was formerly, briefly, an outpost of Freddy J’s BBQ, and before that, a sandwich shop. The co-op’s worker-owners renovated the space themselves with the help of friends and partners.

There are about 20 seats inside, and two tables outside the front door at 402 Connecticut St. One of the first things I noticed was the bread rack behind the front counter. Bagels and pretzels hang from some pegs; loaves rest on top of others.

Since it opened the retail window at its original 123 Baynes St. location, BreadHive has worked with local partners to complement its carby wares. At the cafe, West Side businesses are represented by coffee from Public Espresso, craft soda from Community Beer Works, and Barrel + Brine’s pickles and kraut with some of the sandwiches.

Breakfast sandwiches are served from 8 to 10:30 a.m., on your choice of bagel or pretzel–the bakery has increased the size of the former to better accommodate their toppings.

There are traditional pairings, including the Aaliyah ($7), with breakfast sausage, scrambled eggs, cheddar and maple butter. The housemade sausage was chunky, unlike the thoroughly emulsified patties often seen elsewhere, while the maple butter added a lovely touch of fat and sweetness – and a reminder of pancake breakfasts – without being overwhelming.

The Courtney ($6, featured photo) was topped with pastrami, eggs again, Swiss cheese, greens and mustard. The meat was stacked thick and the crunchy greens offered contrast to the chewy bagel, as well as vitamins.

At 10:30, the menu switches over to lunch. Sandwiches are offered on bread instead of bagels. At my visit I was offered sourdough, seeded sourdough, or deli rye. Having also tried the roasted eggplant Stevie ($8.50), and the turkey Gwen ($10), the vegan Bjork ($10) was my favorite lunchtime option.

Tempeh bacon, a thin layer of avocado, sprouts, greens, tomato and spicy mayo, all play second fiddle to the Barrel + Brine kimchi. Not too spicy but plenty funky, the fermented cabbage offered a welcome departure from the more standard (but still tasty in their own right) eggplant and turkey sandwiches.

Smoke from the tempeh comes through, and I look forward to trying it again once tomatoes are in season, but the kimchi is the star of the show. Notably, all three sandwiches arrived on untoasted bread. The Bjork came with pickles on the side, while the others did not. The Stevie (which, like the

Bjork, is vegan) was less impressive. The eggplant, onion, pesto, and white bean spread filling was a little light, and offered much subtler flavors.

BreadHive has added sweets at the cafe. A salted chocolate rye cookie ($2.50) was the texture of a fudgy brownie inside, crunchy on the outside. It had a rich cocoa flavor with earthy rye overtones, and an almost aggressive bite from the sea salt sprinkled on top. The interplay of sweet and salty made this cookie a quick favorite.

CBW’s hopped lemonade ($2.50) was cold and effervescent, perfectly refreshing for a hot summer day. It was well balanced, leaning more sent than tart. The hops come out more on the nose than the in the actual flavor. I would love to see the hop level pushed up, but then again, I usually drink IPAs.

With The Black Sheep restaurant, Phu Thai Market and the Horsefeathers building (Michelle's Caribbean, Bootleg Bucha and the upcoming new location of Nickel City Cheese & Mercantile), the area around 14th and Connecticut already draws food seekers. As BreadHive helps fill the breakfast and lunch deficit, helping it will serve as both a community spot as well as another beacon to outsiders, inviting them to explore what the West Side has to offer.

"Strangers and customers have even helped out – it shows how great the city actually is," said owner Becky Morgan, who estimated approximately $25,000 in damages.

'Bring your own blanket' and enjoy Buffalo-area winter outdoor dining

Restaurants lucky enough to have outdoor space have come up with inventive ways to allow for socially distanced dining with at least some level of comfort.

The new Mojo Market at 3030 Delaware Ave., Kenmore, is in its soft-opening phase offering curbside pickup through online and phone orders.

"With traditional tailgating banned for safety reasons and the Bills' season over, my hope is that celebrants can make the jump to restaurant patios," The News' food editor says.

We might not be able to travel internationally at the moment, but Coco Bar & Bistro is letting our taste buds travel by offering a different cultural food menu each weekend through February.

They're making Bills Zubaz bread at Wheatberry in Amherst

When Lindsay Wilczynski realized the Bills were in the playoffs again, she said, it was her first idea. “I think I can do this in Zubaz,” she thought. She was right.

The Courtney ($6) was topped with pastrami, eggs, Swiss cheese, greens and mustard. (Nick Guy/Special to The News)

The wall rack of bagels in BreadHive impressed a Boston Globe writer. (Nick Guy/Special to The News)

The Aaliyah sandwich has breakfast sausage and maple butter. (Nick Guy/Special to The News)

Near the cash register of BreadHive Cafe on Connecticut Street. (Nick Guy/Special to The News)