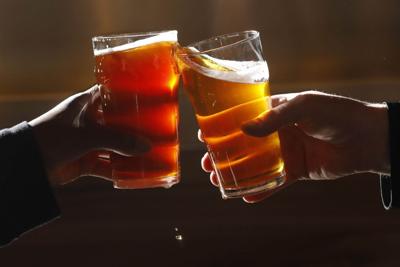 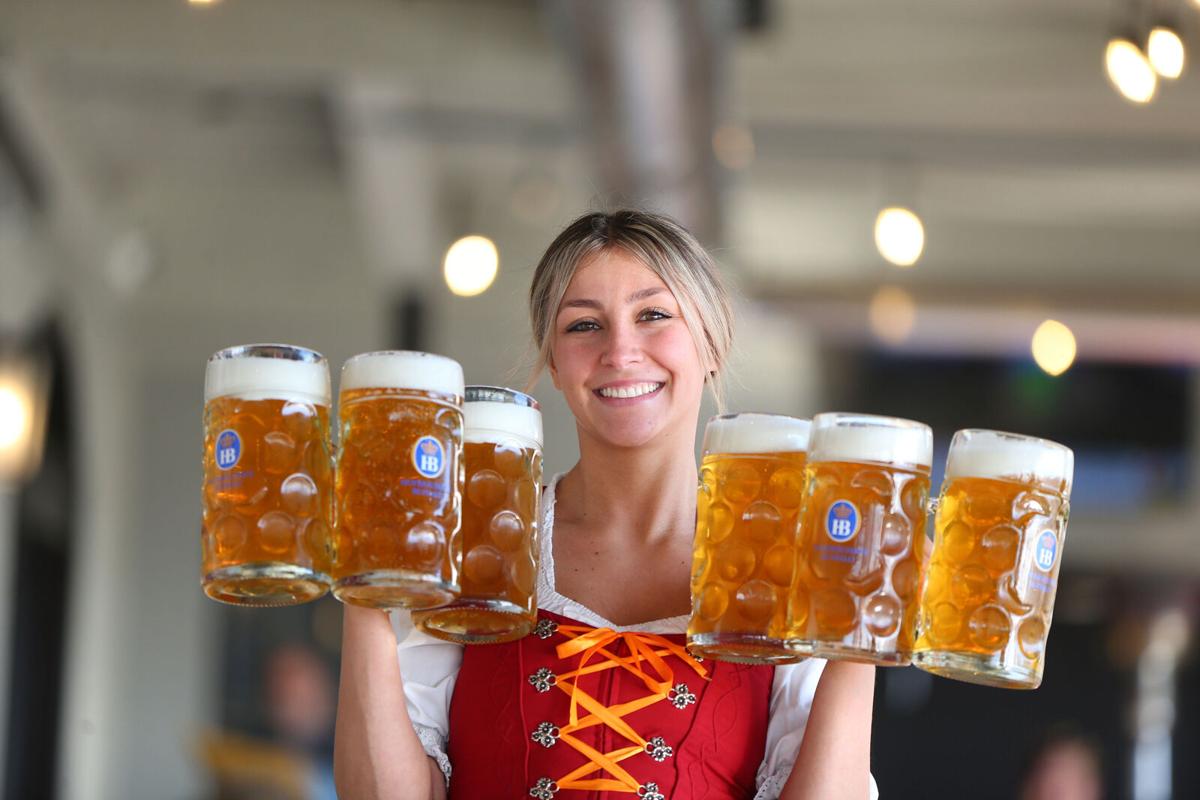 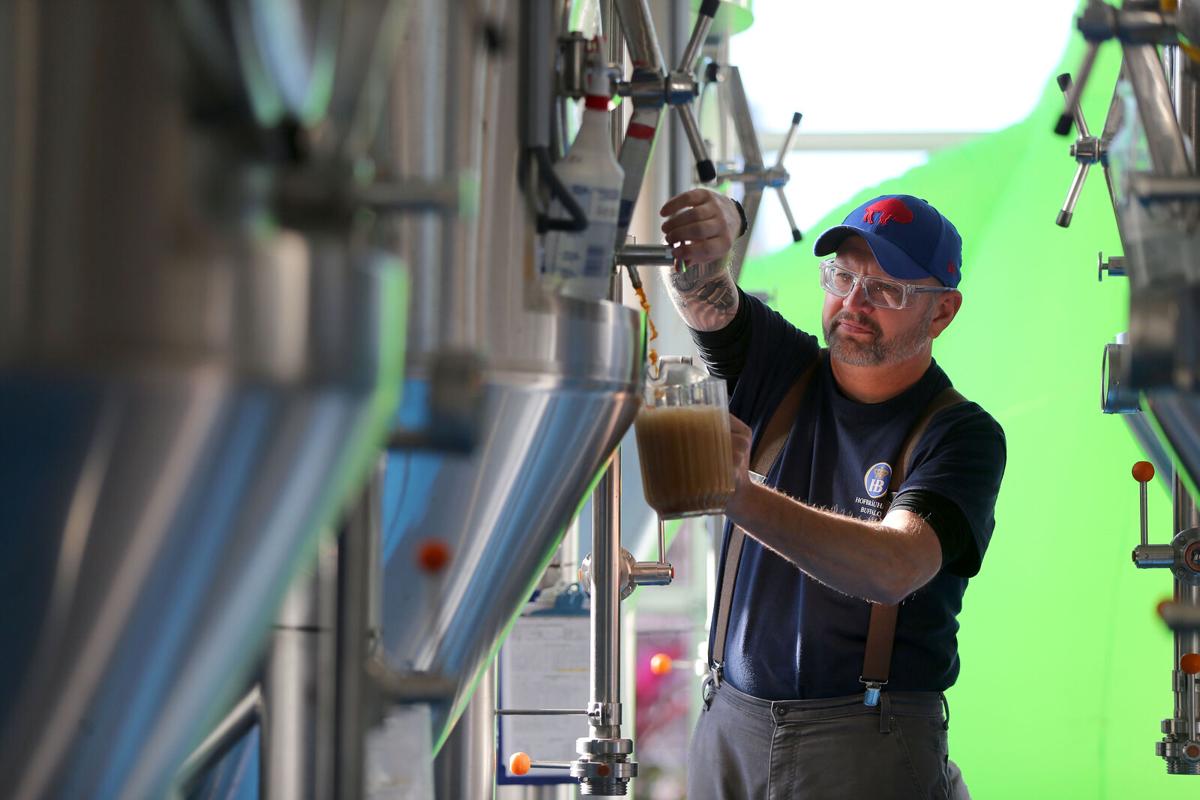 Hofbrauhaus Global CEO Michael Moller visited the Buffalo location in October and started a grand opening gala with a nod to the patience of 60 investors who waited six years for a suitable location and construction – just in time to open during a pandemic.

Moller wasn’t here to console, but marvel that this Hofbrauhaus muscled through a months-long soft opening during a pandemic that left the original Munich location shuttered in spring 2020 and again from last November to this past June.

“We follow Facebook and social media,” he told a raucous crowd on Oct. 16 before leading the first of many Prost toasts. “You can imagine what we thought when you opened in the middle of the lockdown the Hofbrauhaus here in Buffalo. We were suffering. You started slowly, but you started.”

Eighty workers and hundreds of supporters on hand to celebrate were a fraction of craft beer-lovers grateful for any regional brews they could find the last 20 months.

Many craft breweries closed temporarily but at least seven new ones opened. Most sold beer to go during pandemic peaks and staffed taprooms when lower Covid-19 community spread warranted.

But In the Mix Brewery in Barker and Jamestown Brewing Company shut down for good. Labatt Brew House closed at the start of the pandemic and remains that way as its parent company considers whether to sell it or resume operations, though the Draft Room has reopened in the same Cobblestone District building.

Most breweries across the state were able to go with the flow and reduce brewing staff during lockdowns, Cox said, and lean on federal small business loans to help keep pub staff afloat. Many also found new retail markets.

To be sure, the pandemic hurt. Less business was coupled with supply chain disruptions that raised the cost of hops, malts and other brewing ingredients.

“We're not at the volumes that we were at before the pandemic,” Cox said. “We got through it and we're looking forward to more continued growth over the course the next year.”

First Line Brewing opened in August 2020 in Orchard Park with a one-barrel brewing system capable of producing almost 250 pints of beer at a time. It has since nearly tripled in indoor-outdoor space and increased its brewing capacity fivefold.

“When we got the building, we envisioned a small, packed place where people could come in and there was a lot of standing room,” co-owner Michael Maiorana said. “Then Covid happened, and it completely changed the business model.”

Now that the businesses have reopened, the question remains of whether craft beer fans will continue to patronize breweries this winter or hunker down at home.

Pandemic ebbs and flows will likely dictate the outcome.

Here is a look at how four breweries opened early in the pandemic, adapting as they went, and how three others began operations during the last several weeks.

Santora’s Pizza Pub and Grill opened its third location in November 2020 in the former Gordon Biersch brew pub and stayed that way for a week until a pandemic upsurge shut it down until mid-January.

The first two pizza pubs have offered beers under the 1927 brand for the last few years – a nod to the year the first Santora’s opened at Main and Tupper streets in Buffalo – but beer-makers from 12 Gates Brewing crafted them before a 15-barrel system revved to life at the Galleria location earlier this year.

Head brewer Rob Haag left 12 Gates for the new gig March 2020. “I was supposed to take a month off, and start with Santora’s May 1,” he said, “but that turned into 11 months off instead.” Haag started brewing the flagship Main & Tupper IPA and other 1927 brands in the spring for all three pizza pubs.

Opened in August 2020, the brewing license for First Line came two months after Covid-19 became a big thing in the region. “We followed all the restrictions and regulations,” Maiorana said, “and fortunately people still came in and enjoyed our beer.”

That includes its most popular flagship, We the People blonde ale, along with Yabba Dabba…Dude New England IPA (brewed with Fruity Pebbles cereal), Boom Toasted (made with Cinnamon Toast Crunch) and Bitch’n Betty blueberry muffin ale.

The $8 million franchise became the seventh American location with a soft opening in late September 2020, which was confined to the 350-seat outdoor patio. A limited menu was cooked on outdoor grills until the business closed in December during the height of the winter pandemic peak. The 850-seat indoor digs opened as conditions improved in February.

“We're fortunate that the 6-feet-apart guideline is easy for us,” said Brian Windschitl, chief operating officer. “We're a big beer hall. We have 25,000 square feet, so we could still spread people out. And the ceilings are 24 feet tall. That was a blessing.”

Braumeister Scott Shuler, who grew a handlebar moustache for Oktoberfest, brews under the exacting standards of the German Purity Laws of 1516 to make the lager, hefeweizen, dunkel and rotating beers on tap.

Opened in September, this is the newest of the breweries. The ice-themed bar top and slew of TVs – including the giant one – will remind patrons of the former (716) Food & Sport, which Pegula Sports & Entertainment opened seven years ago in the same digs. New features include a small gift shop that sells Southern Tier beer, spirits and memorabilia, as well as bar taps heavy with company and sister brands like Victory and Sixpoint beers and Bold Rock Hard Cider.

Southern Tier has a small pilot brewing system on-site but will craft most of its unique Buffalo Brew’d beers in its main brewery in Lakewood, Chief Marketing Officer Derek Detenber said.

Jeffrey Henseler and Joe Marshall, who homebrewed together during college, opened TIL – short for Things I Like – in March 2020 and started by filling growlers and cans during lockdowns.

Marshall and his wife, Patricia, spend most of their time nurturing Lilly Belle Meads, which opened at the same address four years ago. Henseler handles most of the brewing duties in a small space off the tasting room, dominated by Lilly Belle honey-based beverages.

The pandemic slowed the process of TIL finding a taproom of its own. While the search continues, you can find its flagship Dank Generation West Coast IPA, a coffee brown ale and seasonal stouts among the Lilly Belle taps in coming months.

Butera’s had been a craft beer and craft pizza fixture in the Southtowns for five years before it debuted its own brands from a one-barrel system late last summer and opened in September 2020. Owner Jim Butera plans to grow the brewery and build a separate taproom.

The seeds for this farmhouse brewery and, so far, breakfast and lunch nook, were planted five years ago when owners Bob and Jen Pepperday enjoyed the Abandoned Brewing Company pavilion overlooking Keuka Lake in Penn Yann.

They found the property of their dreams five minutes from home in Ransomville, closing on the former Midnight Run Winery and surrounding 36 acres in September 2020, then opening in December.

The Pepperdays gutted and renovated the structure and set up a seven-barrel brewing system in a 1,200-square-foot addition, but pandemic-fueled high lumber costs and haphazard contractor schedules delayed progress. Brewing has yet to start, though draft beers are on tap from other state breweries.

Wandering Gypsy has the most limited hours of the new spots: 8 a.m. to 9 p.m. Friday and Saturday and 9 a.m. to 8 p.m. Sunday. Breakfast is served until 1 p.m., lunch at midday, and finger foods all day. “This,” Pepperday said, “is just going to be the starting point.”

Breweries on the horizon

The pandemic slowed plans to open a brewery and gastropub in the former Melloni’s Market in Youngstown, which also will feed Griffon-produced beers to its existing gastropubs in Clarence, East Aurora, Lewiston and Niagara Falls. The owners told Niagara County economic development officials in August they hope to bring off the project next year.

Owners await their farm brewing license and hope to open before the end of this year at 41 Edward St., serving a rotating mix of experimental beers as well as local foods.

Owners announced an April 1 grand opening in the former Dave & Busters at Eastern Hills Mall after passing on spots in Williamsville and West Seneca.

Owners announced a partnership with Steelbound Brewery & Restaurant, which has locations in Ellicottville and Springville, to open a brewery, taproom and restaurant by spring in the former Funk Lawn Care center on Orchard Park Road in West Seneca.

Gusto will take a closer look at several of the newest regional breweries in coming weeks.

The hottest cocktail trends of 2021

The pandemic shifted and amplified trends in how, what and where people drink, from portable options to low-ABV concoctions.

German Beer 101: A primer on pilsners, pale lagers and purity

A head brewer schools us on everything to know about German styles, from saisons to stouts. 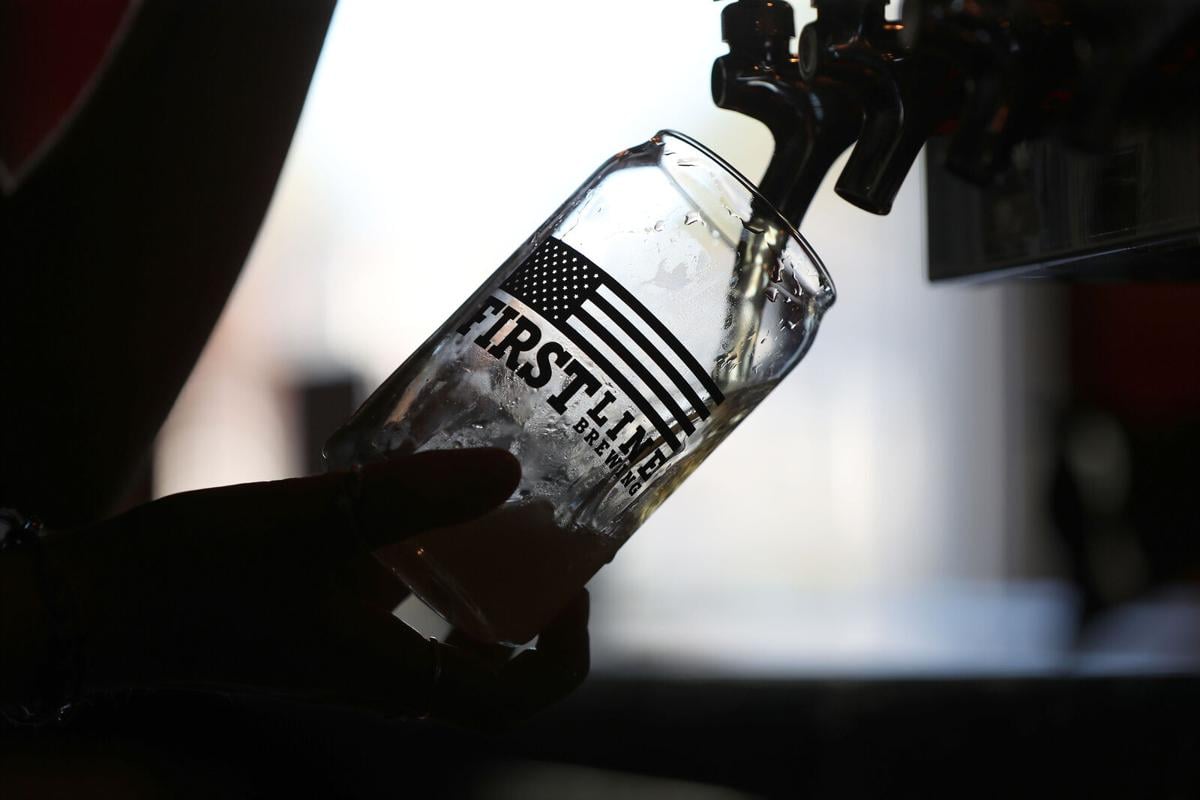 First Line Brewery in Orchard Park has tripled in size since opening in summer 2020. 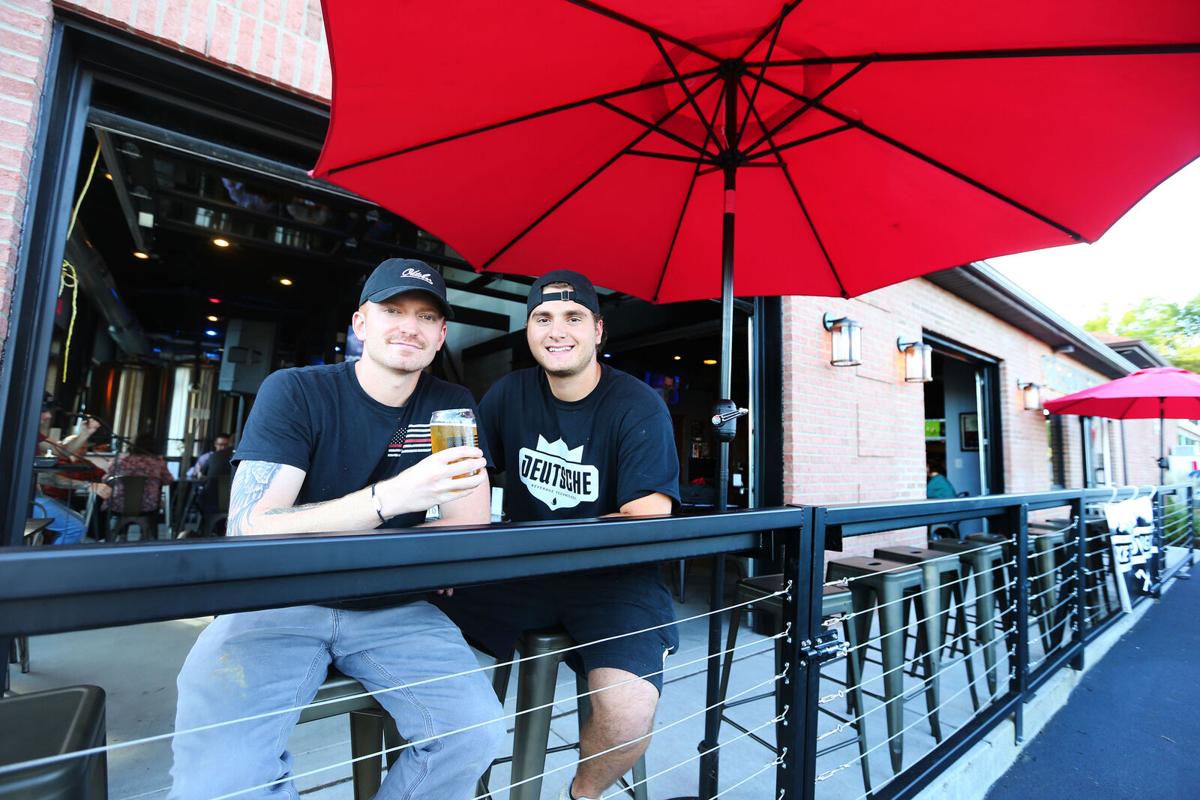 First Line Brewery co-owners Shane Stewart, left, and Michael Maiorana use cereal to help brew some of their most popular beers. 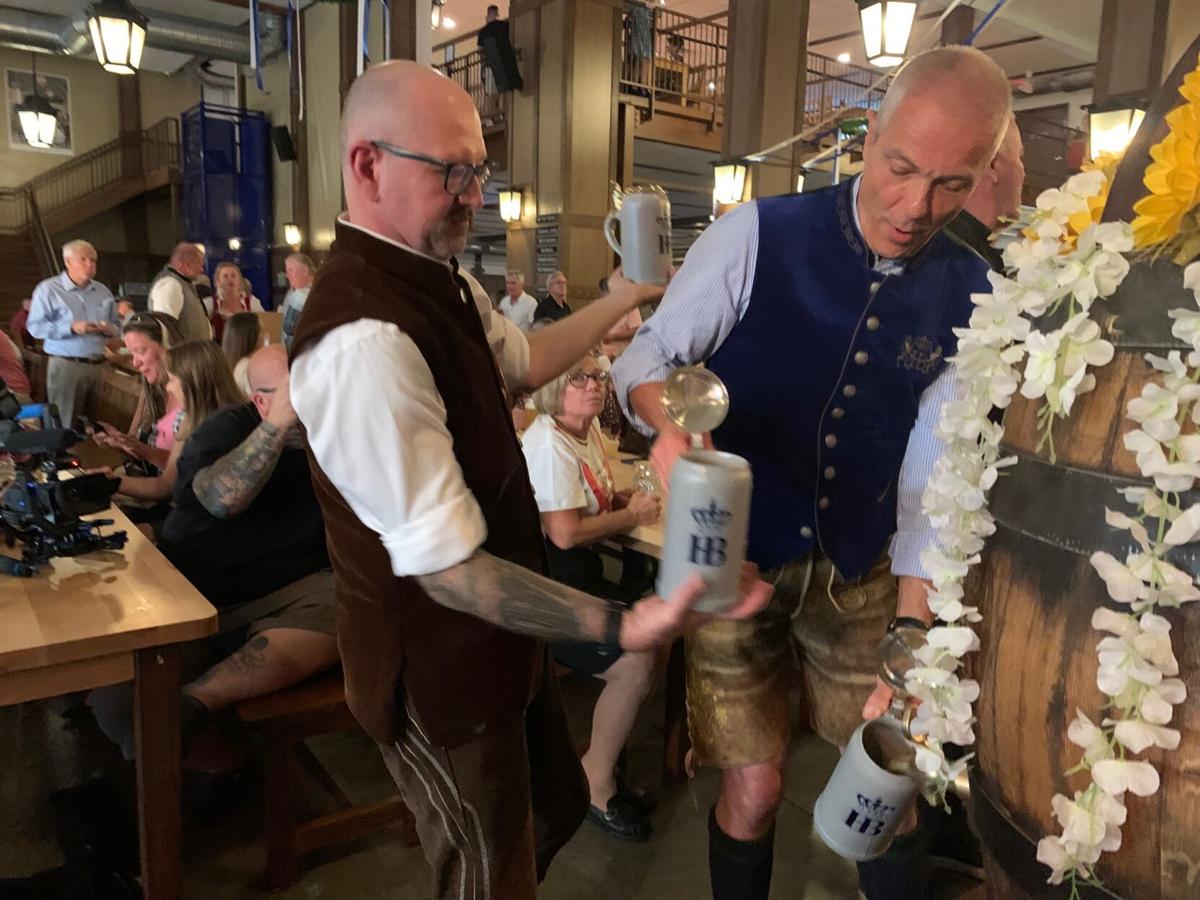 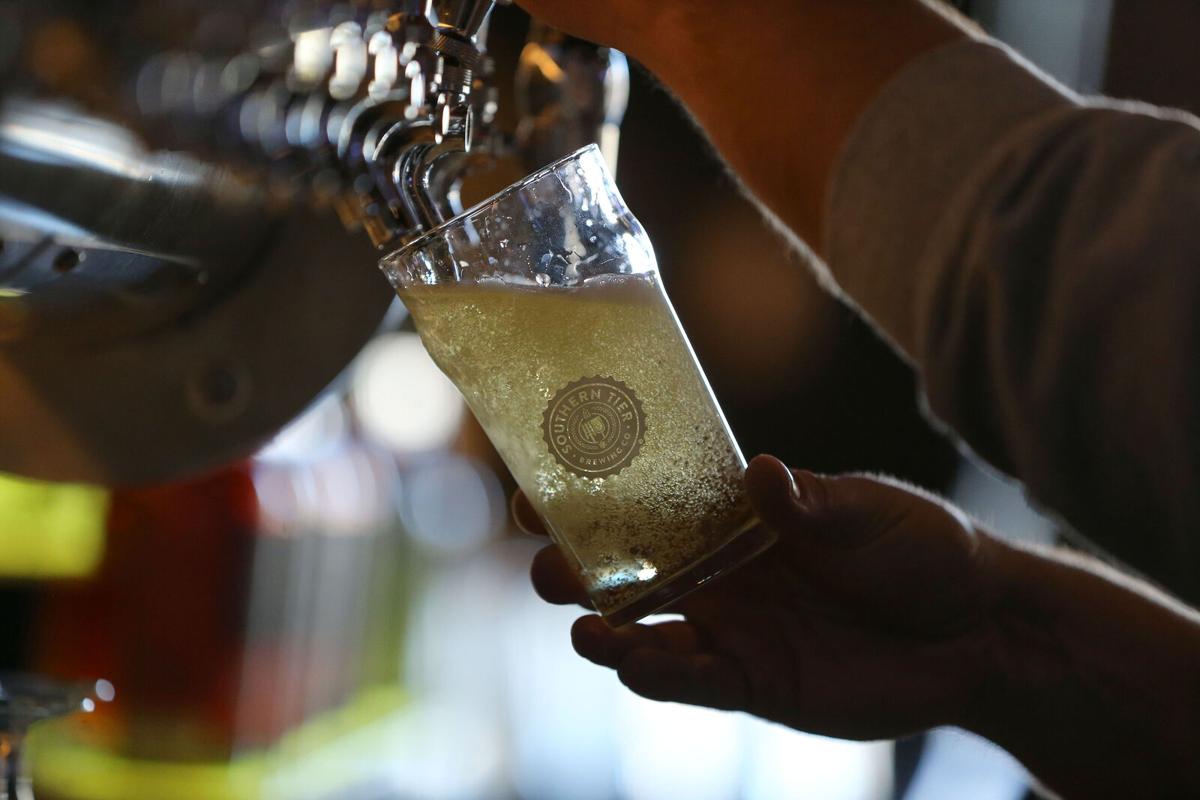 A Southern Tier Brewery Buffalo bartender pours a Bold Rock Hard Cider, one of the sister brands served at the newest brew pub in the company's fold. 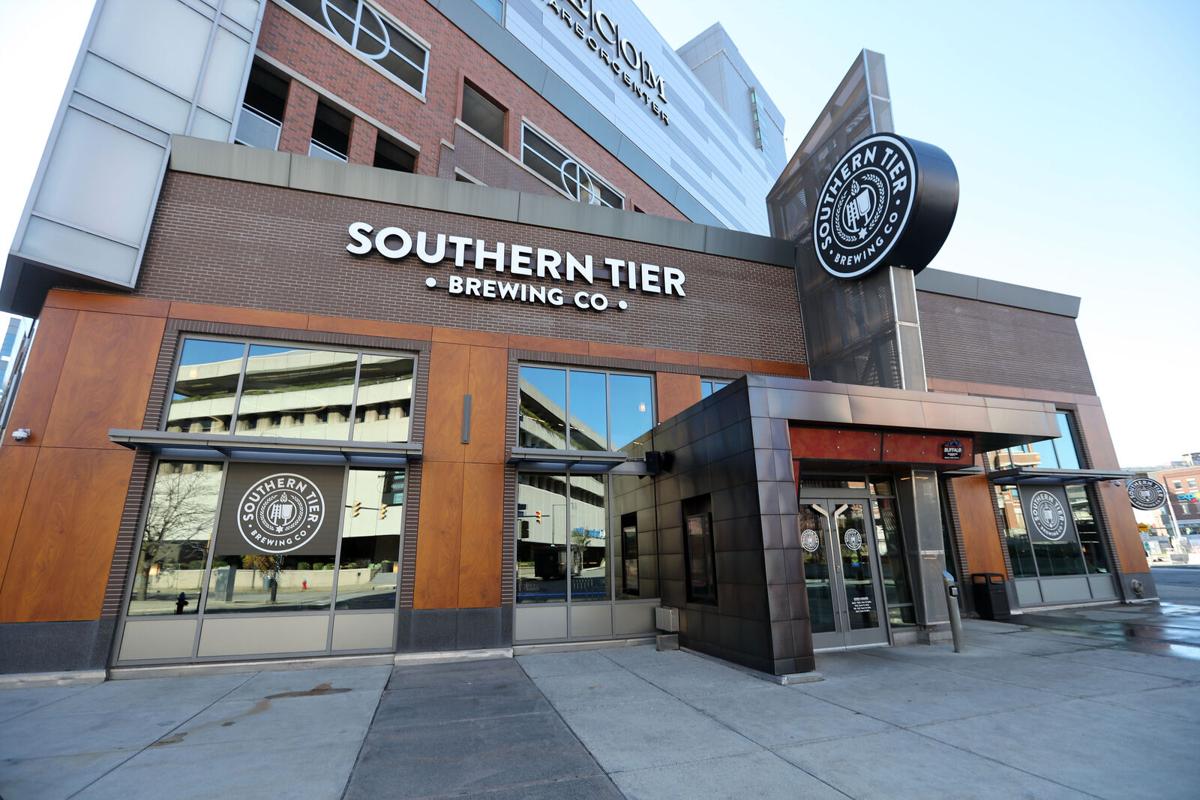 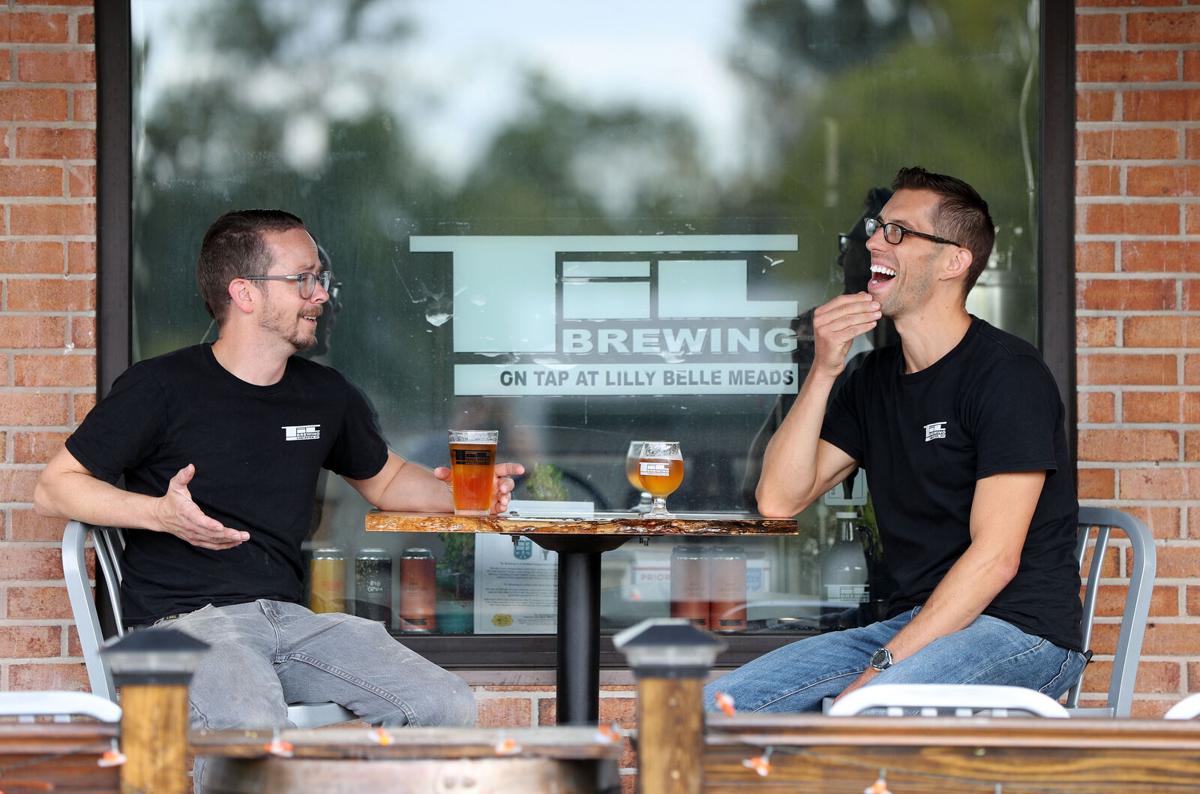 Longtime friends and TIL Brewing co-owners Joe Marshall, left, and Jeffrey Henseler have found a way to mix mead and craft beer taps in the same Lancaster tasting room. 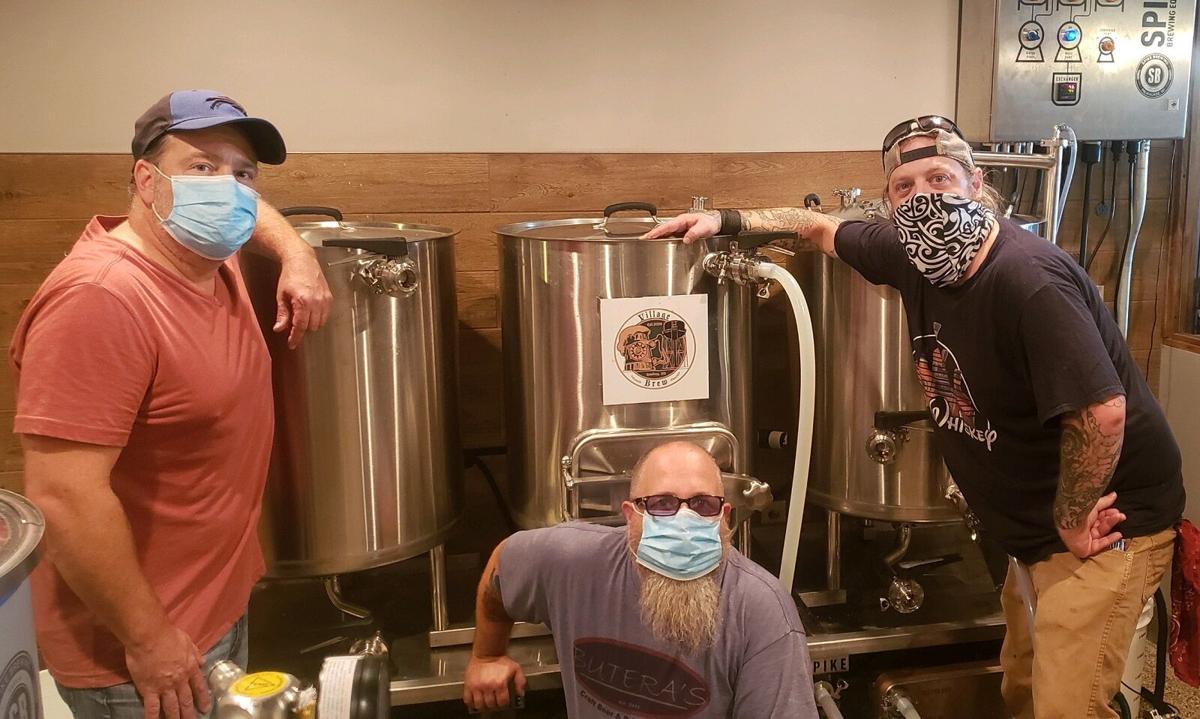 From left, Jayson Schultz, Jim Butera and Craig Lucas make up the brewing team at Village Brew House, under the corporate umbrella of Butera's in Hamburg. 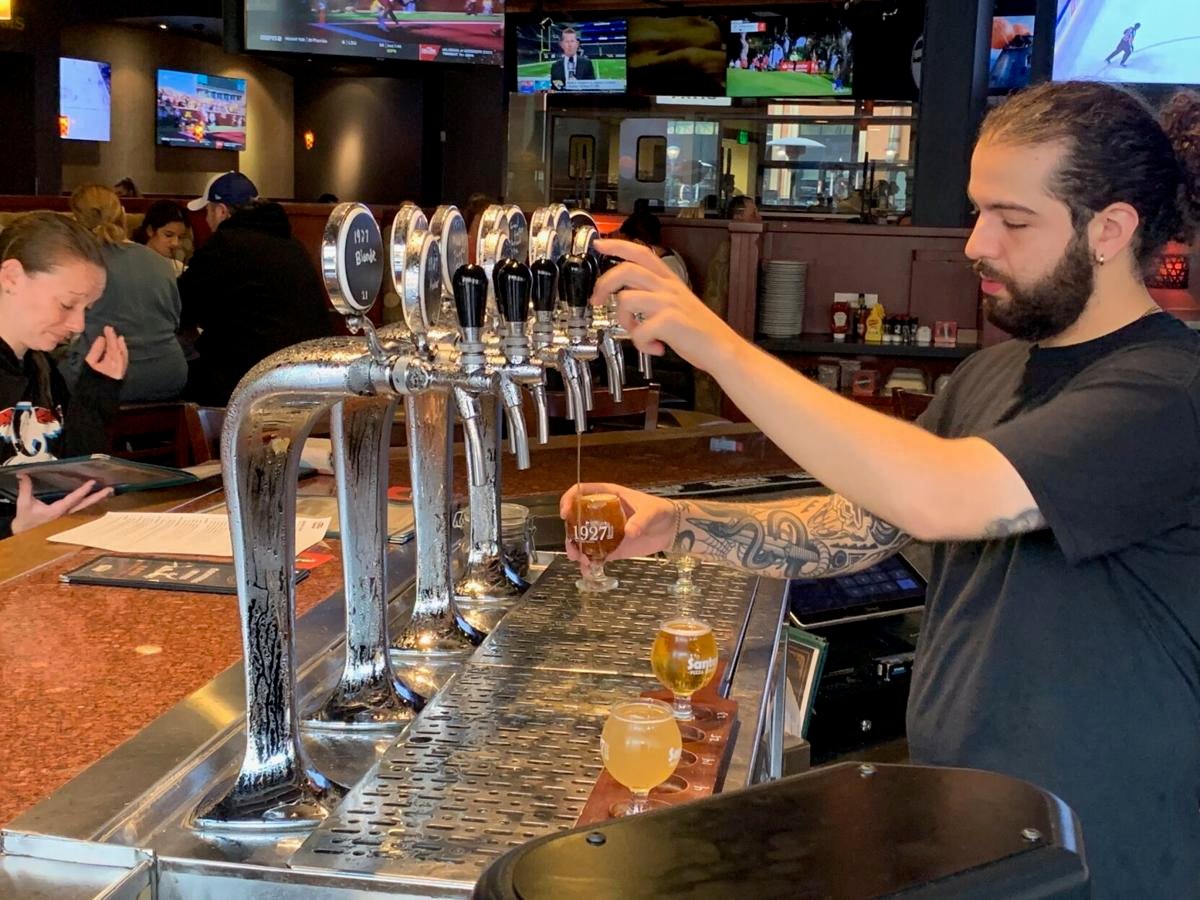 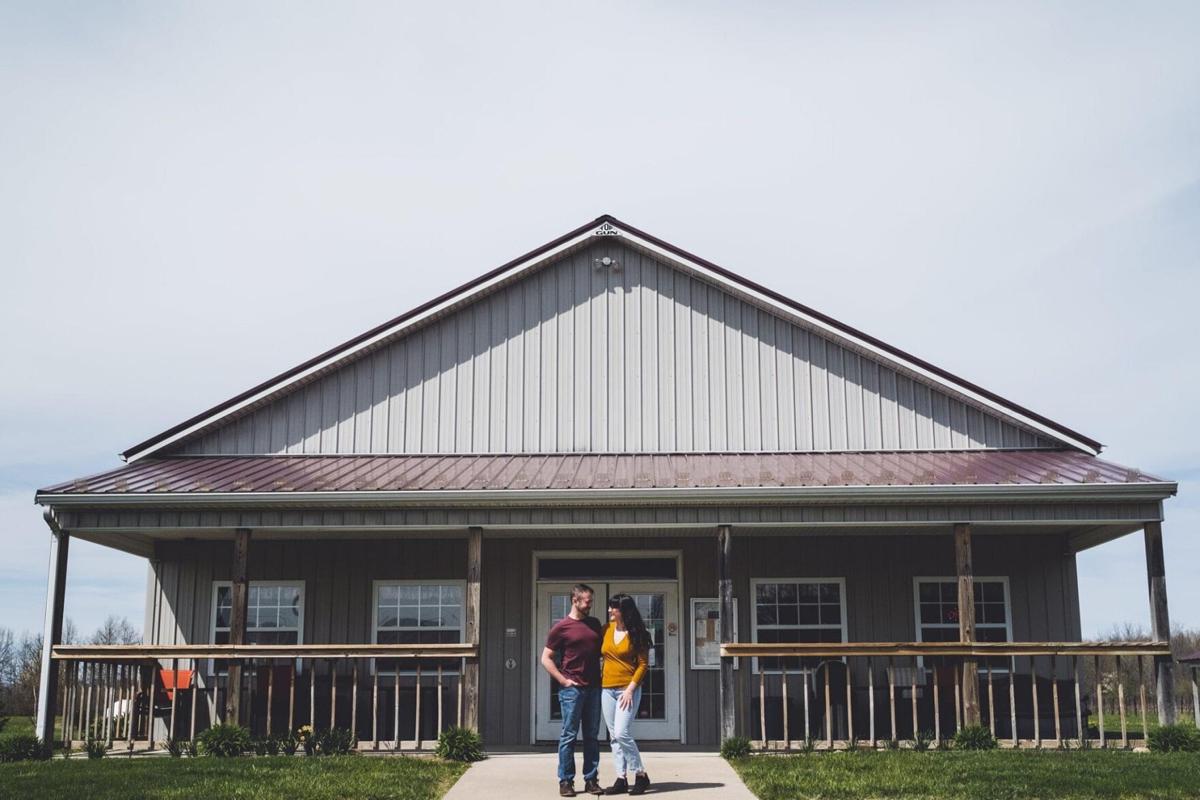 Pandemic-related contractor and supply chain issues have slowed Bob and Jen Pepperday from brewing beer at Wandering Gypsy in Ransomville, but they still serve lots of New York state craft beers on tap, as well as killer breakfasts and lunches.