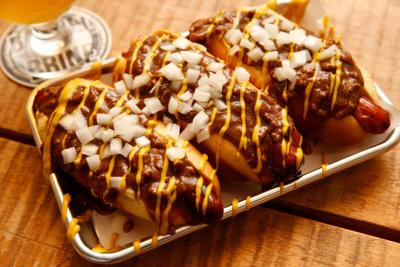 One of the surest ways to pick out recent arrivals to Buffalo is invite them to join you for Texas hots.

If they say “What’s a Texas hot?,” it’s time to have the talk. Because people who have eaten hot dogs their whole lives have managed to miss downing a crisp-skinned link sluiced in thin beef chili warmed with Greek seasonings, mustard and onions.

“Slime dogs” are one of the nicer nicknames, applied by haters and fans alike. Yet after visiting stations of the sauce from Wellsville to Jamestown, from Tonawanda to Depew, it’s clear the most feared, least understood culinary specialties of the Queen City of the Great Lakes are here to stay.

“In my house growing up, if it was your birthday, you got to choose whatever you wanted to eat for the day,” said R.J. Marvin, a Dunkirk lad. “I always had Texas hots,” always from Johnny’s Lunch in Jamestown.

A decade ago, Marvin’s cooking chops helped put Blue Monk on the map. Now he cooks as a side gig, literally, at a counter in a cavernous space hidden in a maze of corridors off Chandler Street. His first job is Barrel + Brine, a multifaceted fermenting business started with wife and partner, Lindsey, in 2015, producing garlic dill kraut, kimchi, classic sour deli dill pickles, kombucha and more.

But he also serves his favorite meal: Texas hots.

Marvin’s Gutter Dawg Texas hot is an ode to his first gustatory love, written in ground beef and warming spices. In his skilled hands, the idealized version is just ground beef and spices, no filler, over a judiciously charred Sahlen’s, and goes for $10 for a pair.

Why not a nice Texas hot? Why not apply the same care as a foie gras torchon? Just because you can get a pair for $4 elsewhere doesn’t make it any less grand.

“I was getting incredibly tired of the food shaming and pseudo-sophistication when it came to the food in Buffalo,” Marvin said. “Buffalo is a very blue collar town, right? And it has its roots and it has a history of these types of food. And that's my favorite food.”

The name of the genius who first put Greek-spiced ground beef sauce on hot dogs and called them “Texas hots” has so far been lost to history.

Here’s one safe bet: They weren’t born in the United States of America. Like so many products of the American melting pot, the rise of Texas hots is an immigrant story. Its success an enduring American culinary genre owes more to Thessaloniki than Texas.

Cinnamon and nutmeg are standard spicing for pastitsio, ground beef or lamb baked with pasta. Greek-born restaurateurs who figured out how to make a living from diners selling eggs, potatoes, hot dogs and burgers found an easy way to add value and distinguish their dogs from the average frank.

Various accounts cite Greek immigrants in New Jersey or Pennsylvania as the inventors. This much is certain: By 1921, Texas Hot had already opened its doors on Wellsville’s Main Street. At the time, its autobiography notes, Wellsville was trying to catch up to a hot food trend.

It started after the building’s landlord told Jim Rigas and partners about a new food called a Texas hot, and how it was too bad that Wellsville, unlike other towns in Western New York and Northwestern Pennsylvania, did not have a restaurant that sold these hot dogs, the Texas Hot website relates.

The rest, as they say, is history.

After a call for entries on social media, I visited every currently open Western New York Texas hots place that at least two fans mentioned. Here’s my tasting notes from that tour. Reporting my favorites is no attempt to sway you from yours. I’d never try to dictate the terms of your love.

The last of eight stops on one leg of the tour rewarded with my favorite Texas hot of the day. Seriously grilled snappy wiener, sauce that tastes like beef and just enough spice to make me miss yiayia’s pastitsio ($3.65).

Sauce alive with black pepper duels onion for supremacy on a diminutive budget dog ($2.60). Like many peers, the sauce can be built into an omelet or top a burger, too.

Fine-grained sauce glistening with fat over gently griddled dogs with light onion and mustard is exactly why several friends make a pair for breakfast a habit ($2.99).

Significantly livelier sauce that peers in the budget dog ranks, with suggestions of curry under the onions and a budget weenie ($2.89).

Standard Texas hot packaging of twisted waxed paper was challenged by the juiciest franks yet, so gravylike they almost demanded mashed potatoes ($2.50).

My favorite of all, a premium Texas hot experience that’s worth it. Huge beef and spice cocktail flavors, no fillers (2 for $10).

There’s no beef in the vegan Texas hot sauce, but plenty of flavor – too much to compare to Texas hot standards, really. Delicious, though, with an intensity more like vegan merguez ($7 vegan dog, $7 over regular dog).

Even after a century, the Greek influence hasn’t washed out of the sauce ladled over full-sized griddled Zweigle’s wieners, served in a heartwarming 1960's space with tableside jukeboxes ($2.40).

Noticeably smoky skinless link in a silky, savory sauce with chile and onion, eminently snackable in pairs (two for $5.55).

Small, smoky dogs in a chile-powder-forward sauce that are priced to move – and they do, by the bagful ($1.77).

"When I was 28 years old, I moved to Buffalo and it saved my life," said Ronnie Hartman, who will compete in his seventh Nathan's Hot Dog Eating Contest at 10:30 a.m. Monday at Coney Island.

Texas Hot of Wellsville has been serving customers for 100 years. 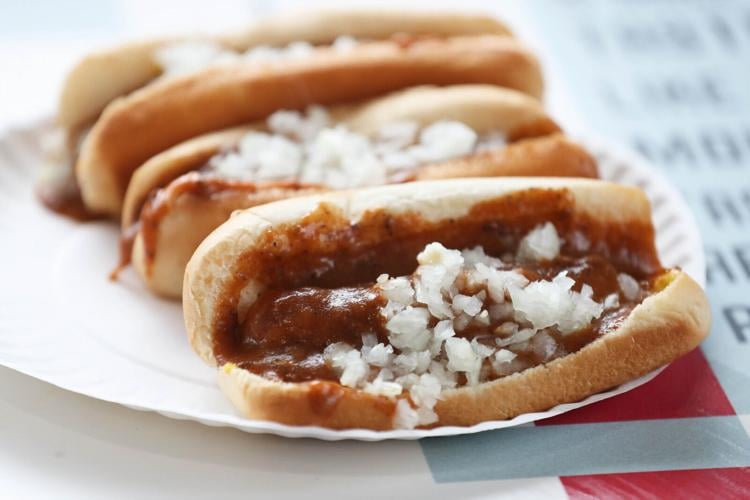 Johnny's Lunch in Jamestown, known for its Texas hots, is celebrating its 86th year in business. Gust Calamunci, 87, son of the founder, still makes the sauce. 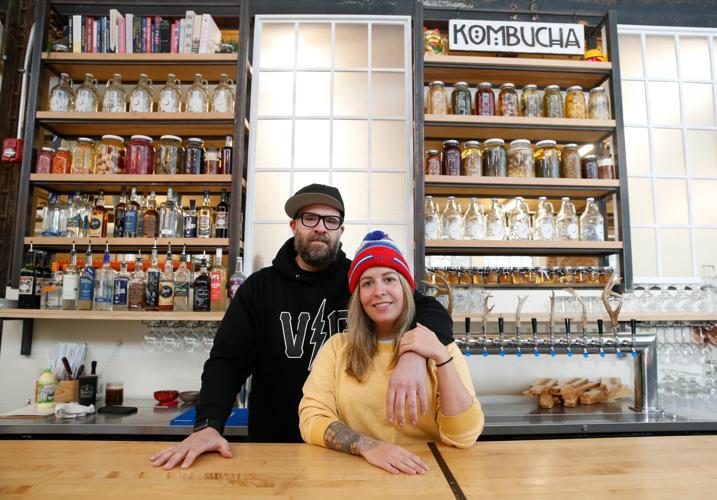 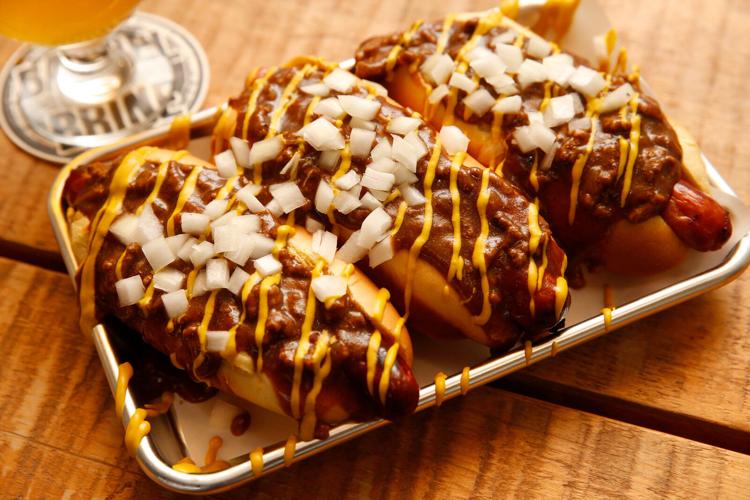 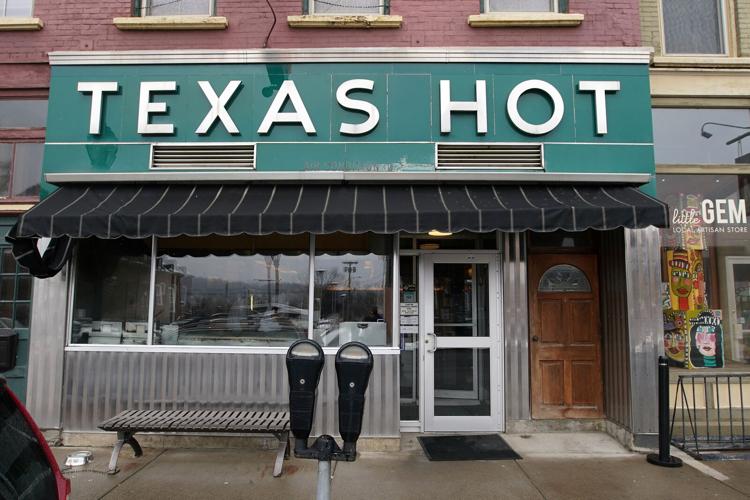 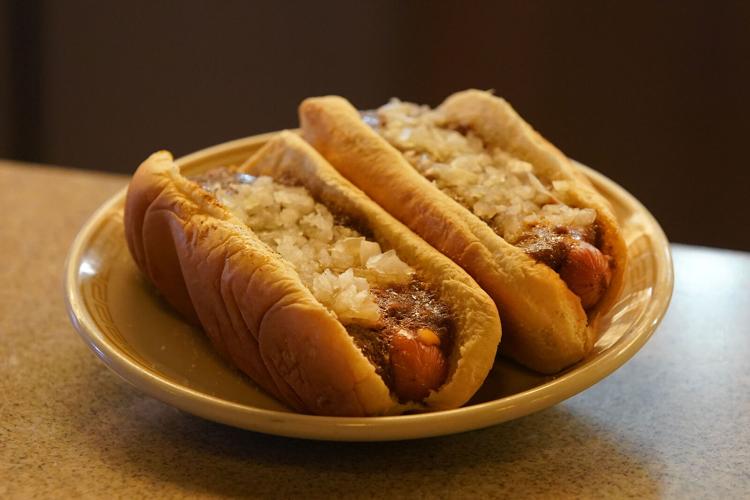 A pair of Texas hots at Texas Hot in Wellsville, which started selling links topped with Greek-style beanless chili in 1922. 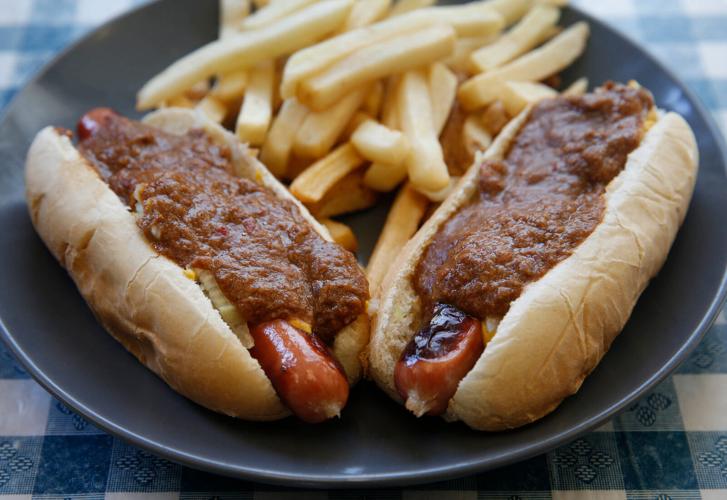 Texas hots at Nick's Place in Buffalo, where a pair comes with fries for about $8. 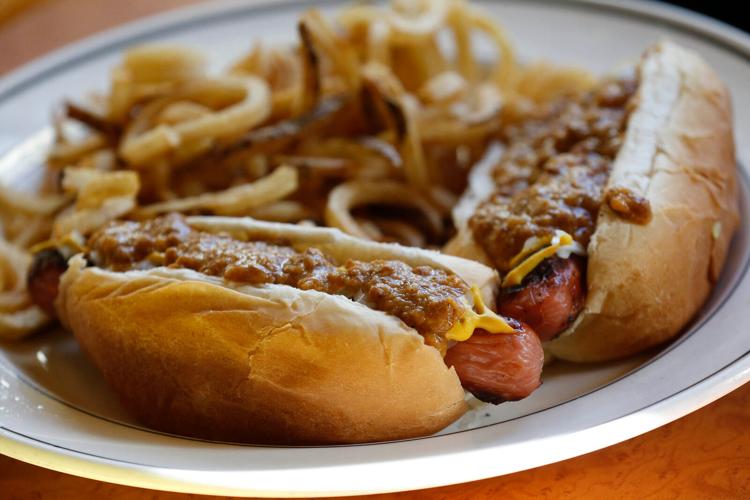 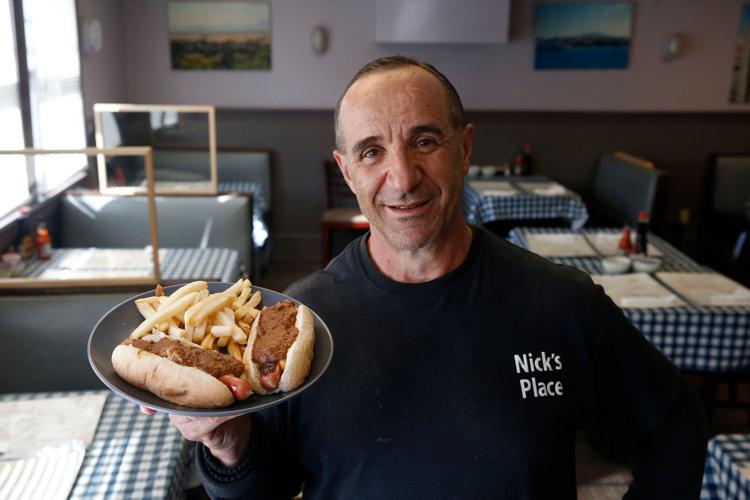 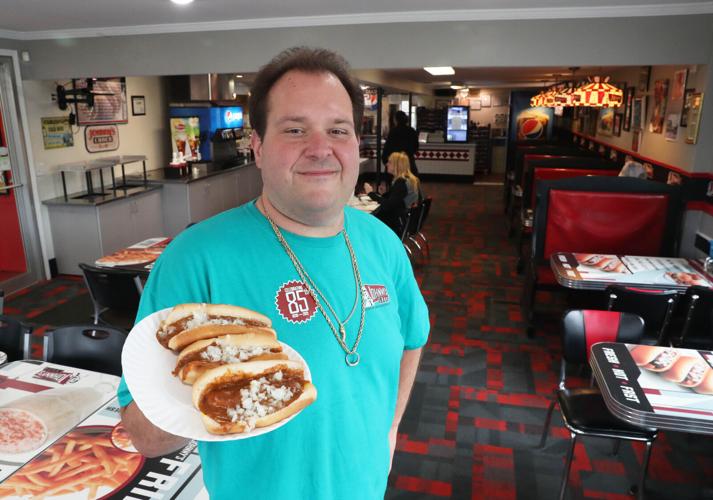