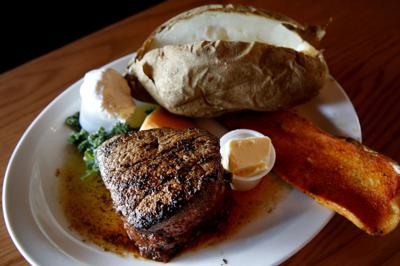 “Where can I find a great steak?” is the rare reader request whose frequency has not diminished over time. There’s more Shanghaiese soup dumpling seekers than there used to be, but going by my mailbox, the hunger for red meat done right has held steady over the last decade.

What has changed is my view on where the greatest prime beef values are in the local marketplace.

While flashier places have historically lured customers to their vast rooms with sizzle – crystal chandeliers, television commercials, red velvet and mirrors – the pieces of meat they find on their plates too often leave them asking where’s the beef?

My answer is to look for the little places, whose pride in their steaks helped them survive the worst restaurant season in memory.

Case in point: Kennedy’s Cove, Clarence’s neighborhood steak specialist, where Dave Janicki and his crew packs the house by word of mouth. Prime beef treated with respect, textbook clams casino and more seafood served without undue interference, plus the twice-baked sweet potatoes make it reassuringly familiar, yet one of a kind.

As befitting a perpetually busy restaurant, Kennedy’s Cove does not accept reservations. That’s because waves of customers wash over the bar and trickle into the dining room.

A la carte adventures can start with boffo appetizers like the smoked beef short rib ($17), an occasional special that shows up to the table with its perfume announcing its smoky presence. Shreds of rich meat tickled off the brontosaurus-scale bone and dragged through bracing horseradish cream proved Kennedy’s Cove carnivorous capacity ranges far beyond the grill’s edge.

Feeling like some pig? The smoker also produces glorious slabs of bacon, cut thick and crisped to meet a glorious end in the company of apple chutney ($17). Another special, fried thumb-sized tail-on shrimp tossed with cherry peppers ($16) in a sweet chile glaze, was a racy diversion from all the cow-based cuisine.

Clams casino ($14) and shrimp cocktail ($19) were both top-flight. Half a dozen clamshells were filled with a breadcrumb matrix studded with clam, bacon and bell pepper that was feather-light instead of pasty, browned to a crust and served steaming. Then the thrill of jumbo shrimp simply poached and awaiting their baptism by cocktail sauce.

Dinners include salad or steak-vegetable soup, baked potato or fries, and garlic toast. For a couple of dollars more, the potato can be loaded with sour cream, bacon and so on, or arrive in twice-baked form.

Having dug into the twice-baked sweet potato more than I meant to, I wished there were more like it – not sugar-whipped into a pumpkin-pie-adjacent dessert zone, just accented with butter, salt and pepper. The plain baked potato achieved a properly crisp skin with fluffy insides, which is more rare than you might expect.

Salmon filet ($33) got a shake of spice rub and rode the grill to bronze-skinned glory, moist and flaky under our forks.

If you enjoy beefsteak, you probably know which cut you prefer. In my advancing age, my taste has tipped to quality over quantity. My play at Kennedy’s Cove is the 16-ounce prime New York strip ($53). Steaks are offered with a blackening spice rub, which turned out to be much gentler than other “blackening” applications, accenting the meat’s richness instead of making me wince.

Arriving blushing medium-rare as requested, emphatically crusted at the edges, every slice satisfied. I took half of my steak home so I could enjoy it again later.

Guests thrilled to the bone-in ribeye with a plump lobster tail ($68), which had also been cooked to a precise tenderness, no rubber seafood here.

The chocolate ganache cake, another triple-layer threat, left a chocolate lover among us wishing they had a third thumb to raise in approval.

Our servers were attentive, cheerful and professional, and Janicki works the room with patience. He doesn’t just ask how everything was while walking by, but listens to the answers and adjusts on the fly.

If you’re more interested in the steak than the sizzle, consider putting in at Kennedy’s Cove. 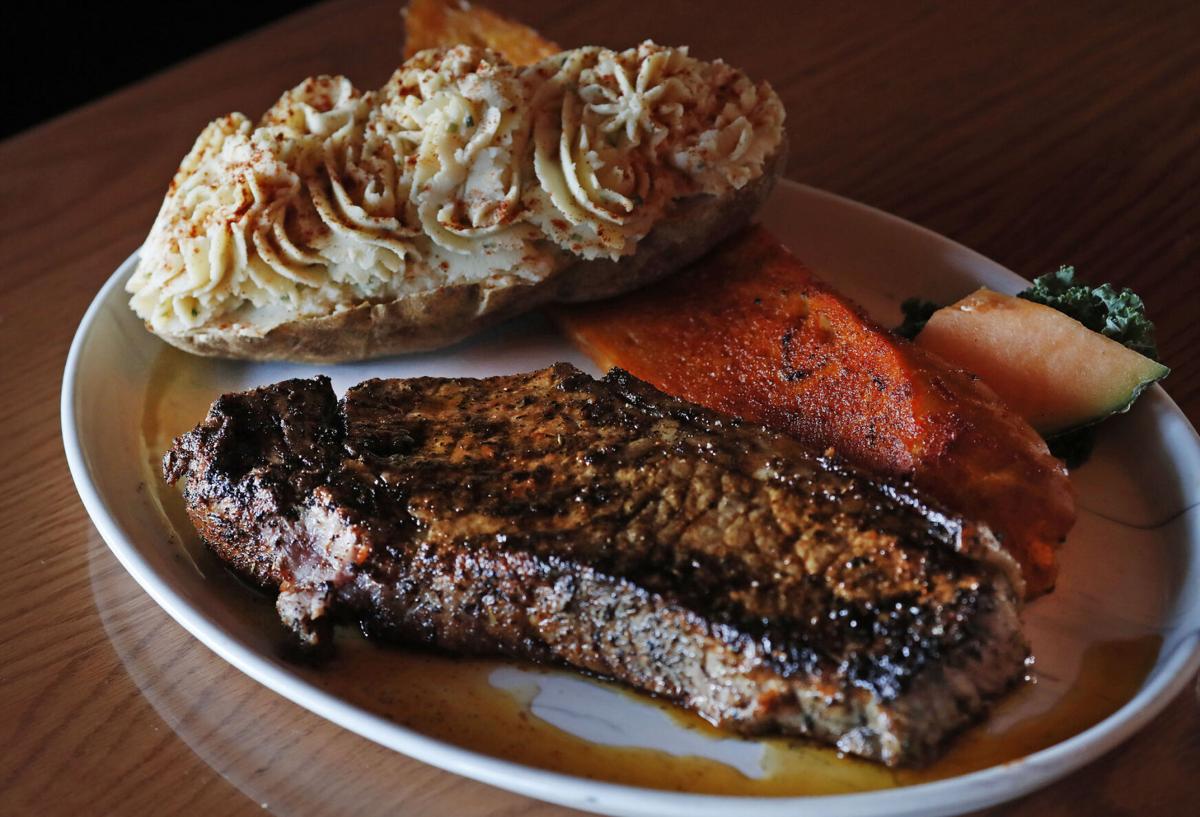 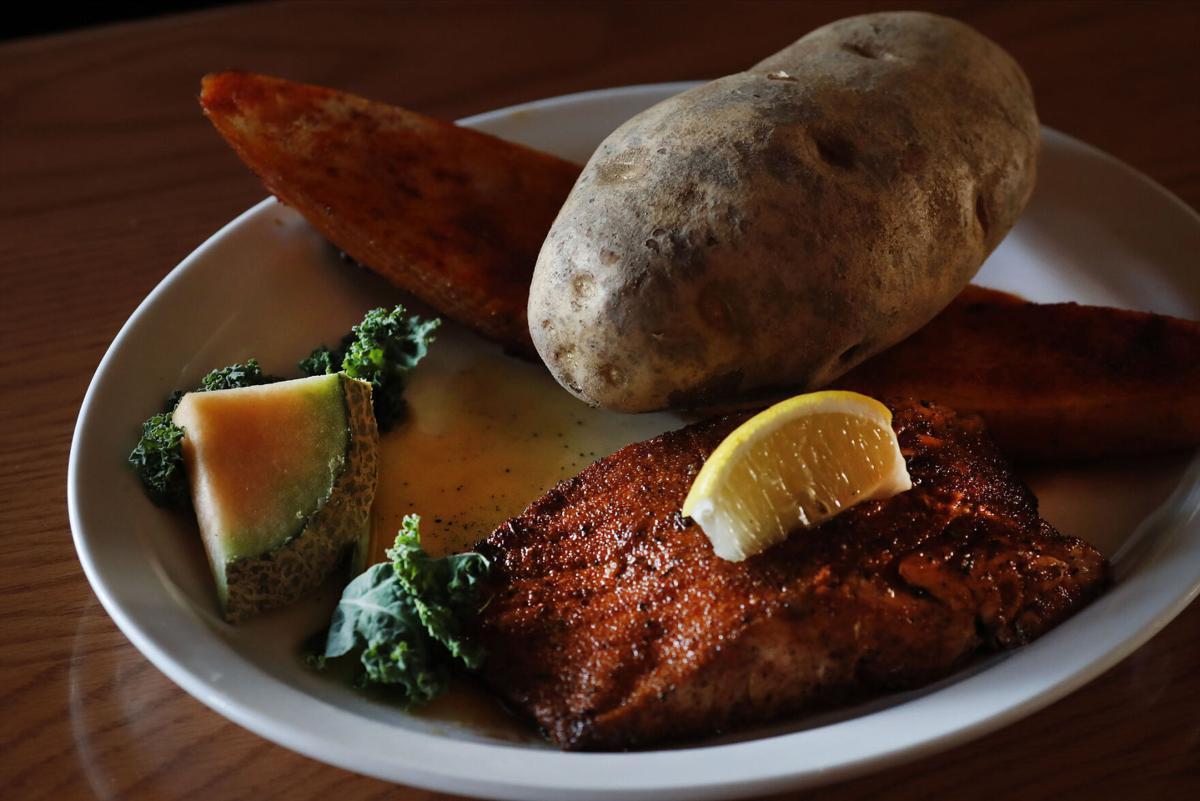 Grilled salmon at Kennedy's Cove, with garlic toast and a mammoth baked potato. 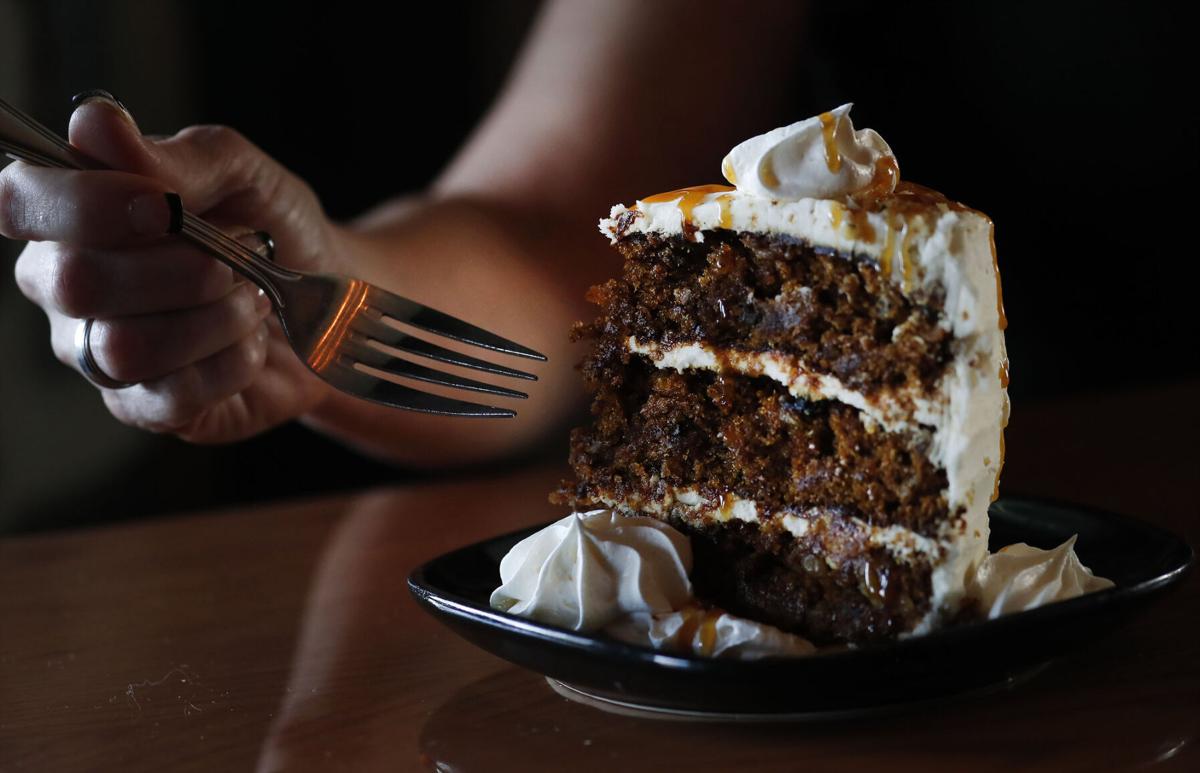 Carrot cake is a favorite at Kennedy's Cove. 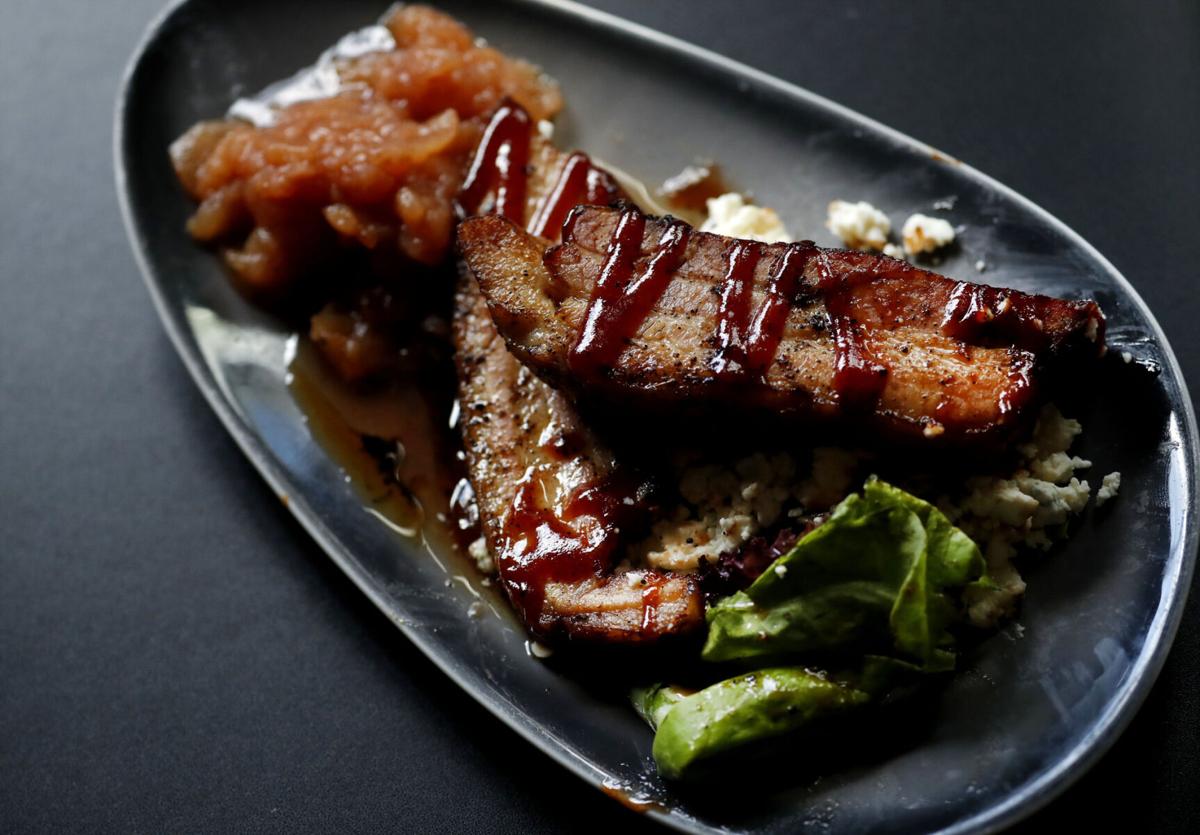 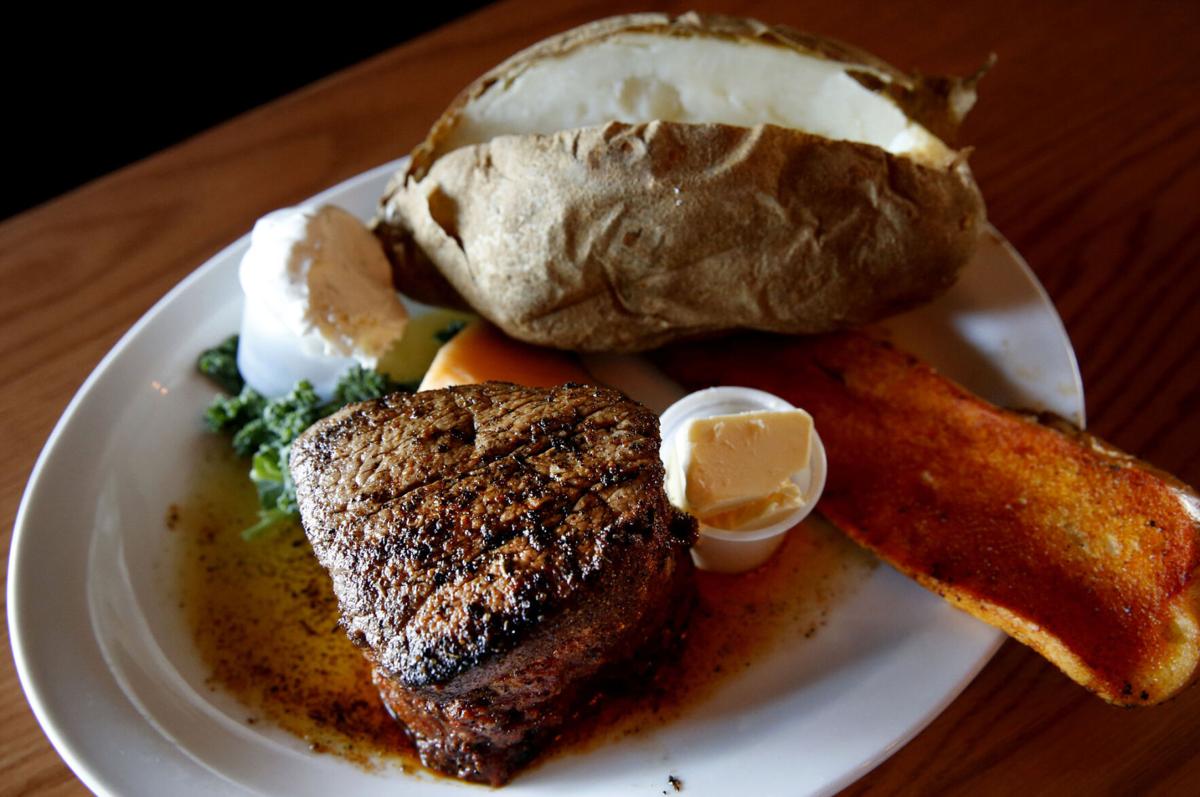 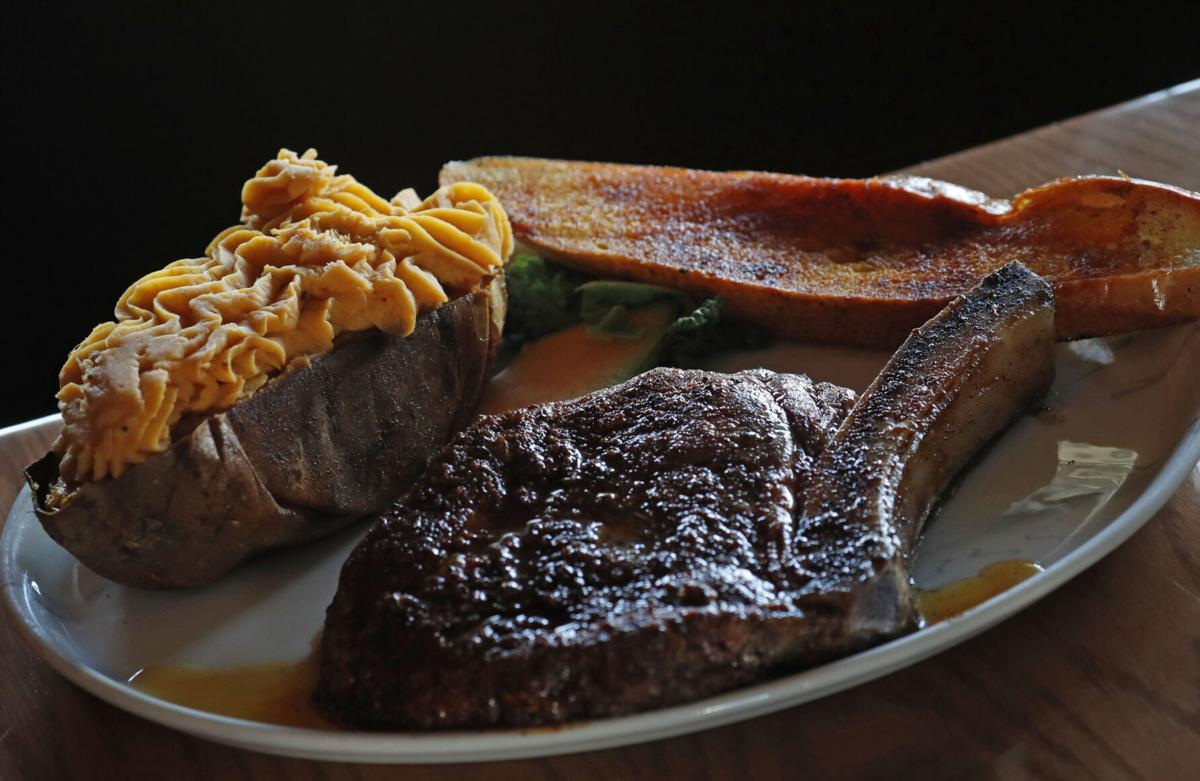