My spare ribs recipe was born of two main ingredients: hunger and poverty.

In 1990, working as a reporter for the Concord (N.H.) Monitor, I met real barbecue for the first time in the dim, smoky confines of Redbones, which is still perfuming the neighborhood on Chester Street in Somerville, Mass.

The first taste was for free, but before long I had barbecue bills no beginning reporter could pay. So I had to take matters into my own hands.

After 20 years of practice, I’m starting to get the knack.

First, an acknowledgement: Barbecue is personal. This is how I get ribs the way I want them. So if they don’t chalk off your your barbecue jones, my apologies, but I had to speak my truth to pork.

First, get a Weber Smokey Mountain Cooker. I’ve fooled around with other rigs over the years, but the “Weber bullet” and the advanced education in its use at virtualweberbullet.com is all I’ve needed. The Weber’s porcelain enamel on heavy-gauge steel is machined precisely enough to allow users to control air intake, resulting in a long, stable cook on a single load of charcoal fuel (I use Kingsford briquettes) and flavoring wood.

Fist-sized chunks of oak or hickory go in the charcoal chamber first. Cover with briquettes, and light the paper under a charcoal chimney full of more briquettes. (Lighter fluid tastes gross.)

Fill a cup with water, then soak wood chips – hickory, apple, cherry, usually, but most any hardwood or fruitwood will do. I throw handfuls of wet wood chips on the coals throughout the cook to keep smoke coming.

When it’s lit, get your ribs from where they’ve been sitting out, coming to room temperature. That means your fire has a shorter distance to take the meat.

Full spare ribs are my choice of raw rib material. The cut is more complicated than Memphis racks, which are trimmed into uniform 5-inch bones, or baby back ribs, the training wheels of ribs. Redlinski’s supplied mine, racks of about three pounds, usually 12 or 13 ribs. The Weber can take six racks at a time, at least.

Generally, I like to trim and season the ribs the night before, so the spice rub can act as a dry brine, and bring its sugar and salt into the meat. But that’s more of a stress-avoiding step. I’ve also seasoned the meat and put it right on the smoke, and I’m not sure anyone else can tell the difference.

There are a million rub recipes, and I don’t have a standard, only guidelines. Half a cup of salt, quarter cup of sugar (white, brown, maple), eighth cup (two tablespoons) of chili powder, onion powder, granulated garlic, black pepper, white pepper and a tablespoon of curry powder.

Prepare the ribs. Trim the floppy boneless pork from the thin end of the rack, and the flap running along the concave side. Freeze the trimmed meat for braising use – mine usually ends up as Vietnamese caramel pork.

The tough membrane on the concave side is easiest to remove if you slip the tip of a butter knife under the corner of the membrane at the rack’s fat end. Use a strip of paper towel as a non-slip gripper, and tear off the membrane.

Cut the racks in two. There will always be a thicker, heavier side, and a thinner, lighter side. Cover generously with spice rub. If you run out, make more. Refrigerate overnight, removing from cooler to come to room temperature in time to go on the smoke.

With the coals lit, pour them into the cooker, and assemble its two-level architecture. Rib shelves, stainless steel props, keep the slabs somewhat separated so air can circulate properly over the meat’s surface. Six half-racks go onto the Weber’s lower level, four in the shelves, two propped on either end. Same with the top.

Pop the top on the Weber, and you’re smoking. Throw a handful of wet chips in the charcoal chamber every 30 minutes or so, for the first three or four hours of what is usually a five- to six-hour cook. I leave the Weber’s air vents completely open, and do not have to adjust any heat settings during the cook.

Fill a spray bottle with a mixture of water and cider vinegar. After the first hour, open the Weber every hour or so. Spray every meat surface. Rotate the ribs so that they all get exposed to the hotter air at the perimeter of the cylinder over time. Not rotating your racks will give you meat that’s leathery on one side, and not quite done on the other.

After four or five hours, depending on the overall heft of the meat in the cooker, test for doneness. My test is pulling two bone ends away from each other. If the meat separates easily and cleanly from the bones, it’s time to eat. 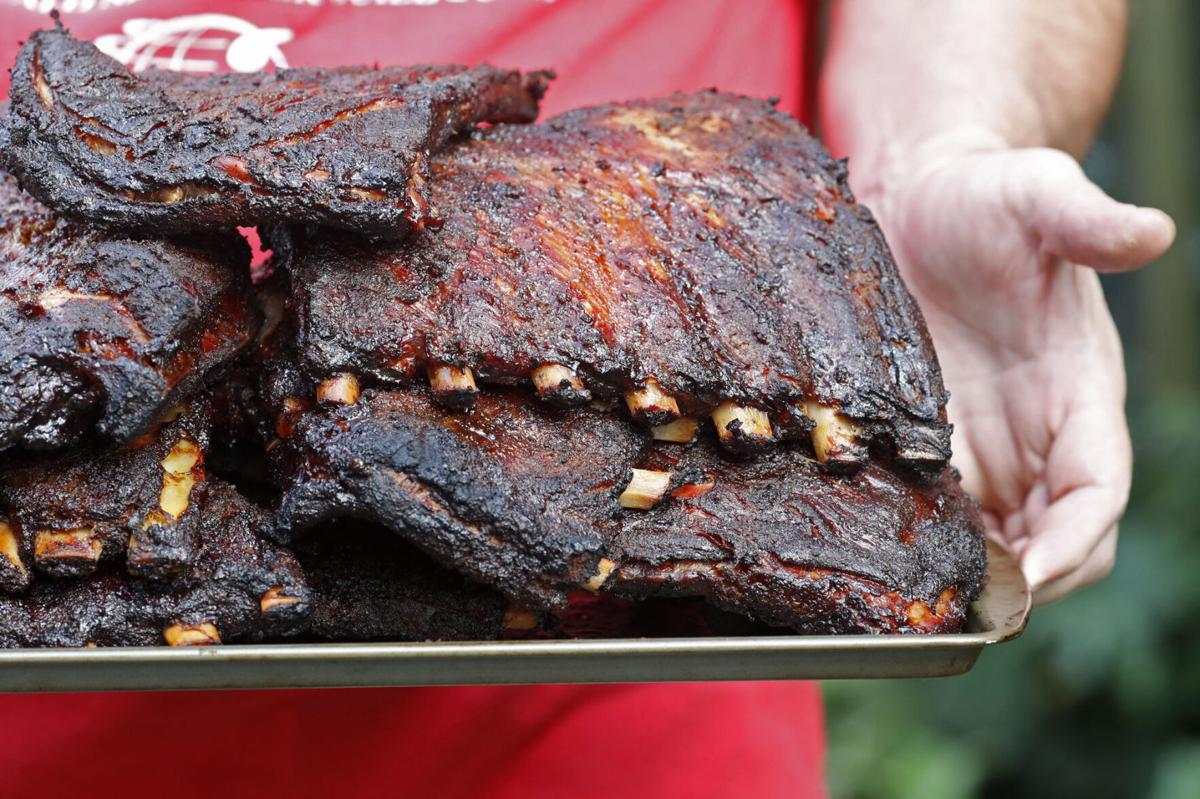 Ribs are never going to be as good once they cool, because the crustiness fades. But they still taste terrific re-fired in a hot oven and re-crisped on a grill. 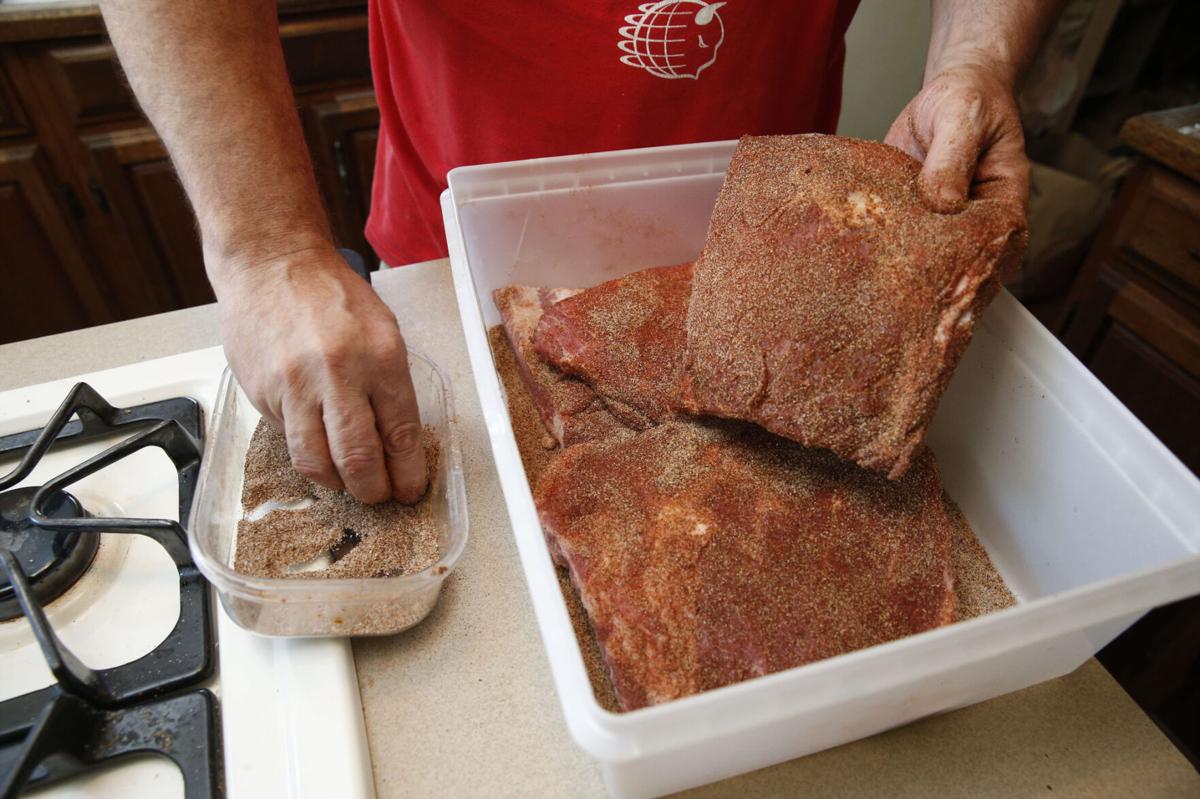 You can let the rub work overnight, or five minutes. Salt, sugar, and spices form a crust on the surface of the pork. 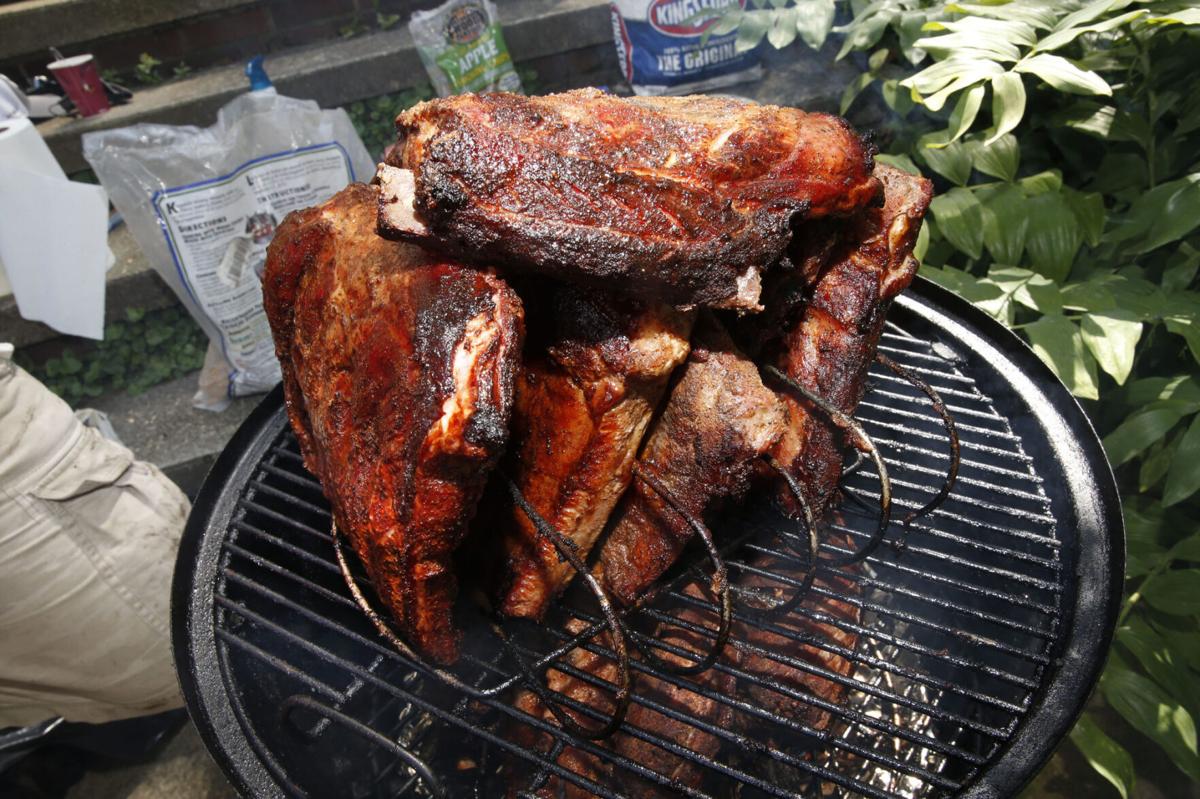 Use a rack to make sure there's air between the ribs inside the smoker. A Weber Smokey Mountain Cooker can hold at least six racks.