News Food Editor Andrew Galarneau wants you to travel to Cleveland, and go to Larder Delicatessen and Bakery to "bite into the pastrami sandwich, lush, tender and smoky on house-baked rye bread, leavened with the crunchy zing of red sauerkraut and housemade mustard. (Karin McKenna/Special to The News) 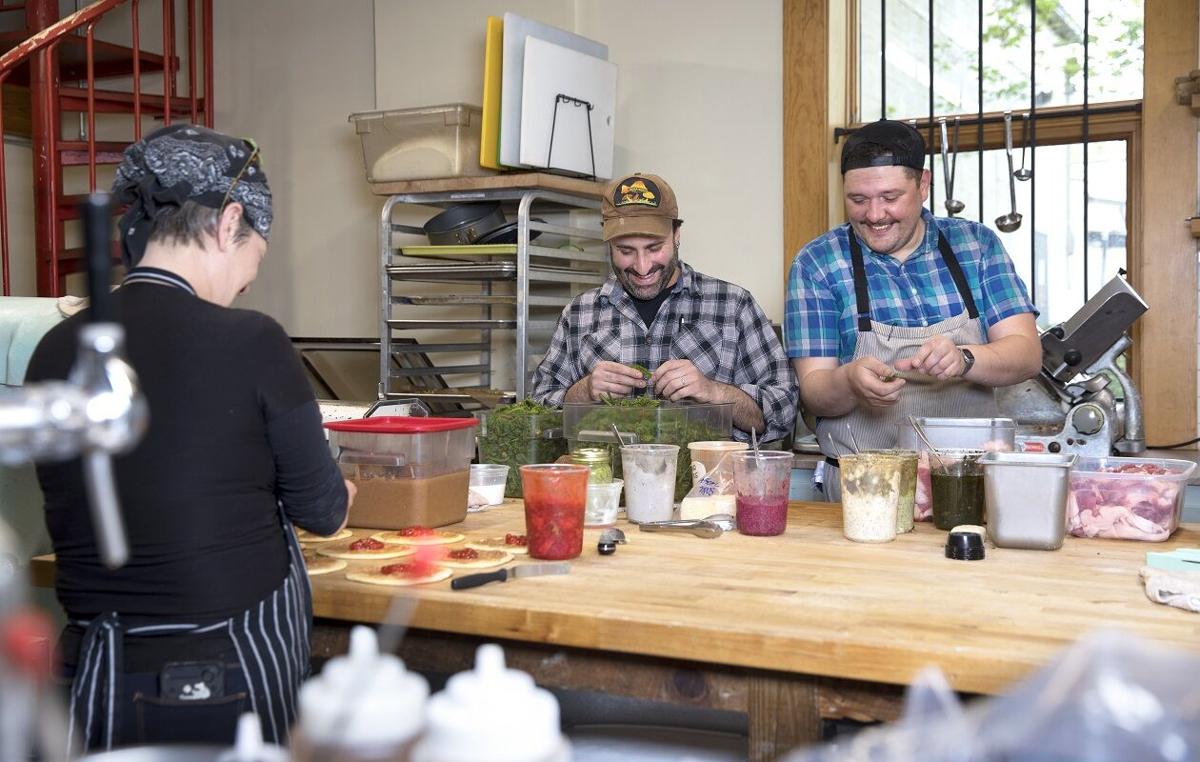 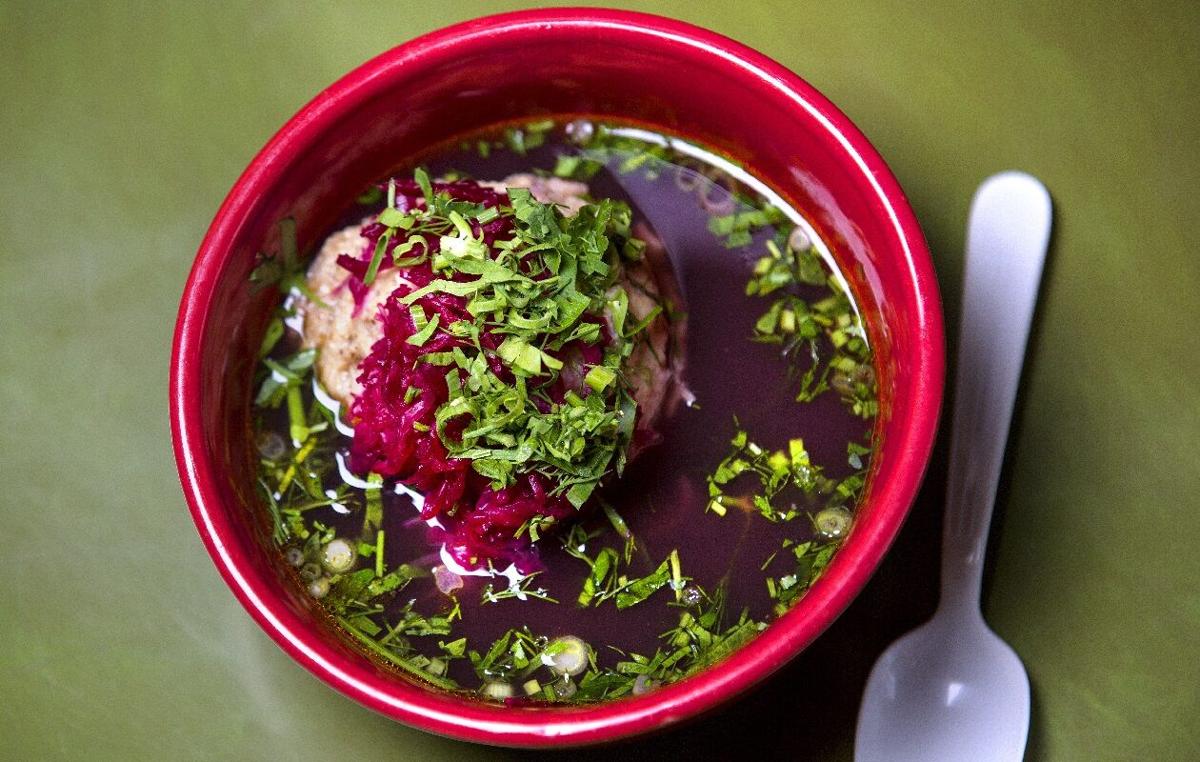 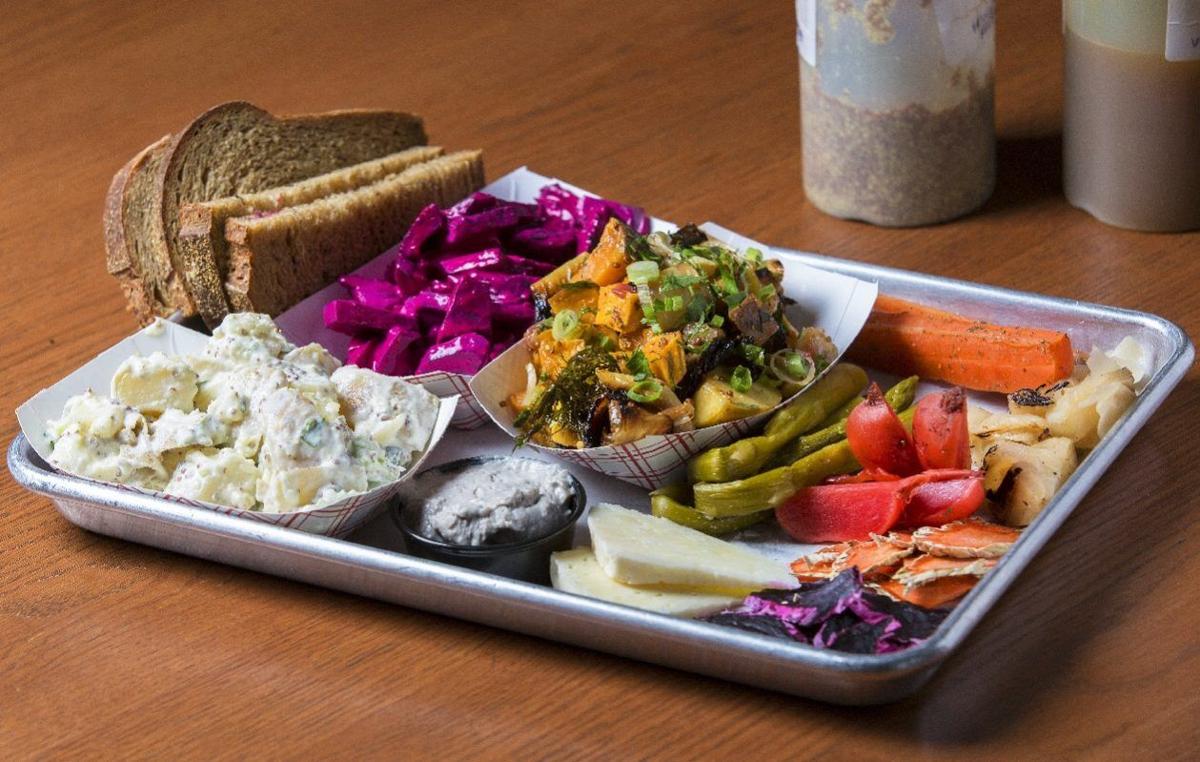 Vegetarian Board at Larder in Cleveland, OH 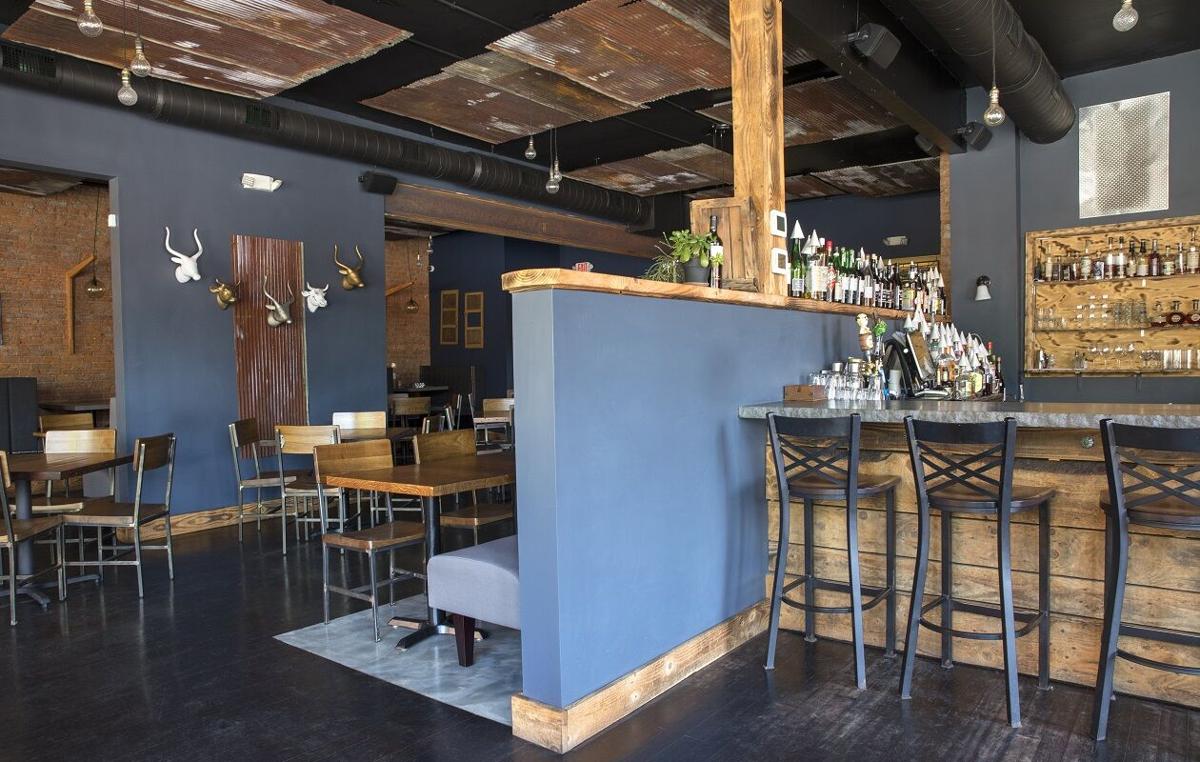 The interior of Cleveland's Salt+. (Karin McKenna/Special to The News) 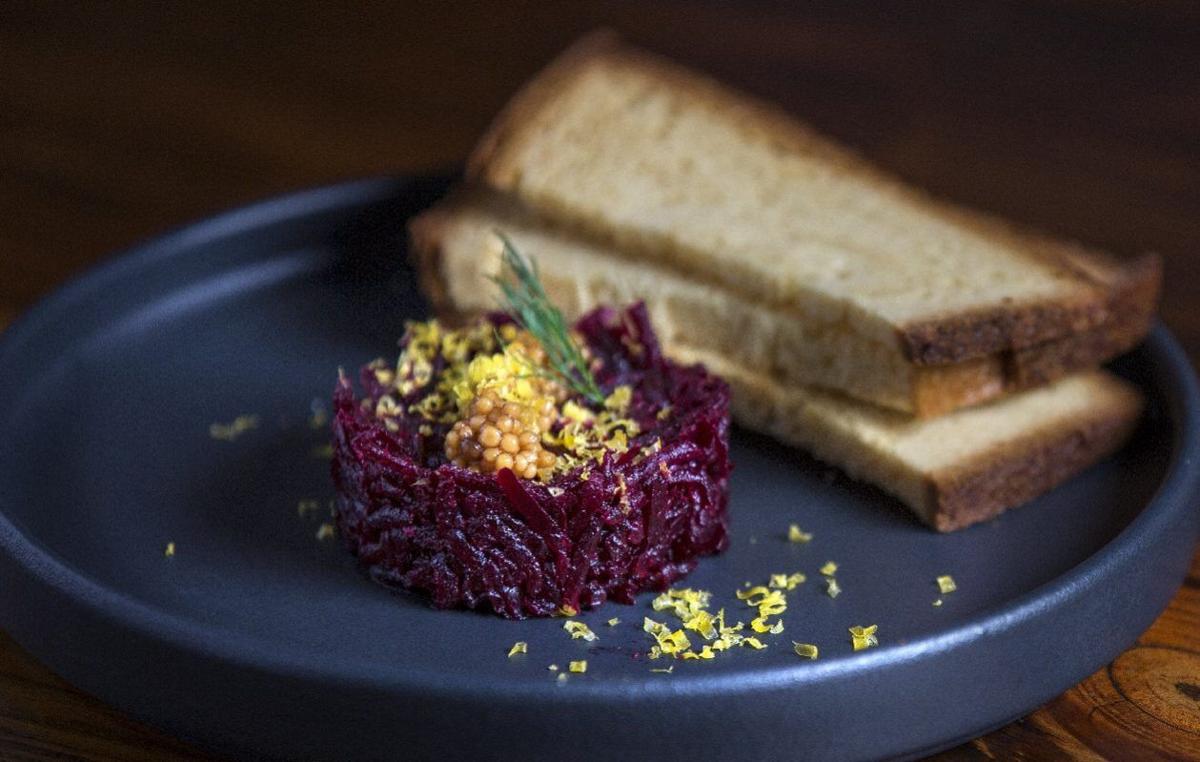 Beet tartare at Salt+. (Karin McKenna/Special to The News) 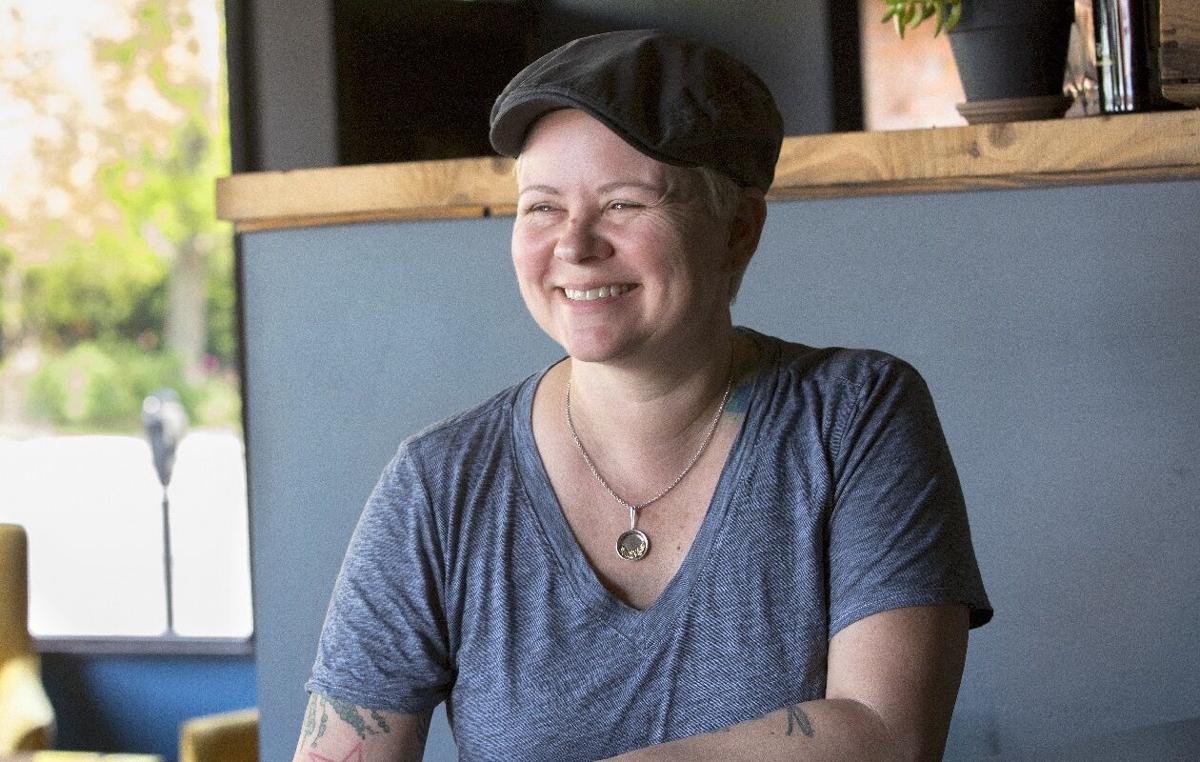 Jill Vedaa, chef and co-owner of Salt+. (Karin McKenna/Special to The News)

If your summer vacation planning points to Cleveland, you probably already know the Rock & Roll Hall of Fame has Janet Jackson’s “Rhythm Nation” outfit on display as part of its Class of 2019 inductees section. And that the Cleveland Museum of Art’s heavy hitter exhibit is “Shinto: Discovery of the Divine in Japanese Art.”

When it comes to edible art, the new class of Cleveland has its own surprises to unveil. The Buckeye State’s coolest city still has first-class fine dining that speaks fluent Italian and French, and paragons of the farm-to-table movement, and old-school Polish cafeteria satisfactions.

But the recent Cleveland crop of dining opportunities has lots of rewarding opportunities, too. In a brief visit, I was determined to find remarkable experiences on a budget, focusing on the $8-to-$15 range.

Here are the results of my investigations, including exquisitely calibrated small plates, lush brisket with a Japanese pedigree, and the closest Shainghaiese soup dumplings you can enjoy without a passport.

Jill Vedaa knew she was taking a risk by opening a restaurant in Cleveland devoted to small plates of food. In Buffalo, its Great Lakes sister city, diners celebrate fried fish that “hangs off the plate.”

In Cleveland, “we have the same kind of mentality,” she said. “If the food isn’t bigger than your actual head, what’s the point of getting it?”

Two years ago, Vedaa launched Salt+ with business partner, front-of-house manager and drinks auteur Jessica Parkison. It was time to try  feeding people the way she wanted to eat. “Entrees always overwhelm me,” she said. “I’m doubting myself that I can eat it, and then I end up taking it home.”

As a Midwest town, “everybody’s used to meat and potatoes, and big plates of food, value over anything else. I just wanted to take a step back from that, and look at quality of food, as opposed to quantity, to highlight the beautiful produce we get in Cleveland in an approachable, fun way.”

The result is a one-page menu – eight vegetable dishes, five seafood, five meat – that tops out at $16. The focused, lively combinations draw from Ohio’s famed Chef’s Garden and foraged ingredients.

Beets are par-roasted and shredded for a beet tartare ($11), whose shaved cured egg yolk and pickled mustard seed is a visual allusion to the meaty original, a dish that “mimics something people are used to, in a healthier way,” she said. Scooped up on toasted slices of housemade challah, it’s a light, playful dish.

Plump wild mushroom dumplings ($12) on mint-fava bean puree were earthy crispy-edged purses stuffed with maitake and morel mushrooms brought in by her forager. Calamari ($11) in whisper-thin crust rested on a coconut-coriander gravy alive with sambal, orange zest and lime juice.

A special of osso buco style bone-in short rib ($15) with Hasselback potato was as big as plates got. Five ounces of beef and an Idaho potato should lay meat-and-potato fears to rest.

The Plantana dessert ($9) was a dense plantain-banana cake that got nuttiness from tahini ice cream and sesame brittle, and hot blackberry caramel glaze poured at table.

“Every dish needs to make an impression,” said Vedaa. “I want everything to have its own identity. As structured as any menu can be, each thing deserves its own space.”

Especially since Vedaa has earned James Beard semifinalist nominations for best chef Great Lakes in 2017 and 2018, reservations are recommended.

Sign up for the Food & Drink newsletter: Restaurant openings and closings, special dining events and more delivered to your inbox every Friday.

Another James Beard nod went to this year-old casual counter-service restaurant, which opened a year ago. With intertwining DNA strands of old-school Jewish delicatessen, scratch bakery, and fermented foods emporium, Larder was nominated as one of the 30 best new restaurants in the country.

Inhabiting half of a historic 1854 firehouse, Larder delivers old-fashioned values made with newfangled ideas.

Jeremy Umansky channels his obsession with koji, the Japanese mold used to make soy sauce and sake, into products from pastrami to vegan “charcuterie.”

Harnessing the enzymatic power of koji, Black Angus briskets are cured in two days instead of the traditional weeks, Umansky said. “It works to unlock all these deep umami flavors and subtle sweetness, creating aromas that come through as great roasted meat flavors, with hints of sweetness, and floral undertones.”

It sounds daft until you bite into the pastrami sandwich ($12), lush, tender and smoky on house-baked rye bread, leavened with the crunchy zing of red sauerkraut and housemade mustard. Smoked whitefish salad ($12), slabs of gefilte fish, and lox hold down the seafood side.

Root vegetables are treated like whole muscles being turned into charcuterie: smoked, cured, inoculated and dried. “What we end up with is something that has the texture, on the beets, that a lot of people say reminds them of the texture of lox, cured fish, or like a beef carpaccio, like a rare steak in terms of its bite.”

The results can be sampled as part of a Larder vegetarian board ($15), with assorted pickles, cheese, and bread.

The third owner and chef-de-cuisine Kenneth Scott comes to the deli business from fine dining, most recently Jonathon Sawyer’s Trentina. At Larder, he’s making dishes like matzo ball soup ($5), a borschtlike vinegary version with the firm dumpling crowned with a riot of greenery heavy on fresh dill, and a fried chicken sandwich ($9) topped with a dill-inflected herb salad and dill pickles on a pillowy sesame bun.

The combination means you can enjoy a bowl of Poca’s posole rojo ($10), pork and hominy soup deeply resonant with chile and tender corn kernels, in the same place as a surprisingly vibrant Rice Shop tuna poke bowl ($16), with plentiful ahi tuna enlivened with yuzu avocado dressing and togarishi tempura flakes on a bed of seasoned kale.

There’s also a bar in the next room, a columned and high-ceilinged former bank lobby, offering craft cocktails, plus 30 taps of craft beer and cider. Conversation was harder here.

Unlike Buffalo’s Expo, this operation will bring the food to customers marked by numbers on stands that serve as signals to food runners. Service was swift, with food arriving in 10 to 15 minutes.

Shanghai-style soup dumplings, meatballs and broth inside wrappers so thin that getting them to your mouth is a suspenseful experience, aren’t offered in Buffalo. This place opened about 18 months ago, offering the dumplings (six for $5), called xiao long bao, as part of a brief lineup of Shanghaiese classics. A picture window into the kitchen lets curious diners watch the nimble fingers of the dumpling master at work.

Spicy duck head ($6) and pig ear with chili sauce ($7) are on the menu, but I can only vouch for the soup dumplings, scallion noodles ($6), and the brightest, most addictive seaweed salad ($6) I’ve ever encountered. Service is swift and sure, and the small room fills fast at peak hours.

What could make a Greek-hearted diner serving breakfast all day, hot and fast, even better? Booze. And so Dinerbar was born. Get the housemade corned beef hash, and the cinnamon toast pancakes shot through with swirls of caramelized sugar – and get a horseradish-jacked Bloody Mary to go with.

Even if you’re stuffed to the gills, the glass-sided dessert case, loaded with temptations like the salted caramel cheesecake crowned with a dome of mascarpone and Giant Ho-Ho (both $8.95) are worth a sightseeing stroll, for eye candy.

In a homey enclave amid big-box stores, house-smoked lox on a bagel with cucumber, red onion, cream cheese and dill ($9) is perfectly balanced. House-smoked brisket on rye ($12) is topped with cucumbers, dill and mustard. But the show-stopper is the Lincoln Park ($11), a chicken sandwich of buttermilk-brined breast that juts out of the bun like it’s trying to fly. Juicy, crunchy, tangy with cool bread-and-butter pickle slaw, it’s practically perfect.

6 beers to help put you in a proper fall mood

From marzens, Oktoberfest lagers and pumpkin ales to amber ales, porters and stouts, there are plenty of options for you to reach for this fall. Here are a few suggestions.

The Niagara Wine Trail will hosts its annual Share the Bounty event to benefit food banks, food pantries and charities on Nov. 13 and 14.

5 essential local beer pairings for your next Bills tailgate

Here are five essential local beer and tailgate food pairings as you cheer the Bills on their way to a successful season.

Escape to the grapes of the Lake Erie Wine Trail

News Food Editor Andrew Galarneau wants you to travel to Cleveland, and go to Larder Delicatessen and Bakery to "bite into the pastrami sandwich, lush, tender and smoky on house-baked rye bread, leavened with the crunchy zing of red sauerkraut and housemade mustard. (Karin McKenna/Special to The News)

Vegetarian Board at Larder in Cleveland, OH

The interior of Cleveland's Salt+. (Karin McKenna/Special to The News)

Beet tartare at Salt+. (Karin McKenna/Special to The News)

Jill Vedaa, chef and co-owner of Salt+. (Karin McKenna/Special to The News)