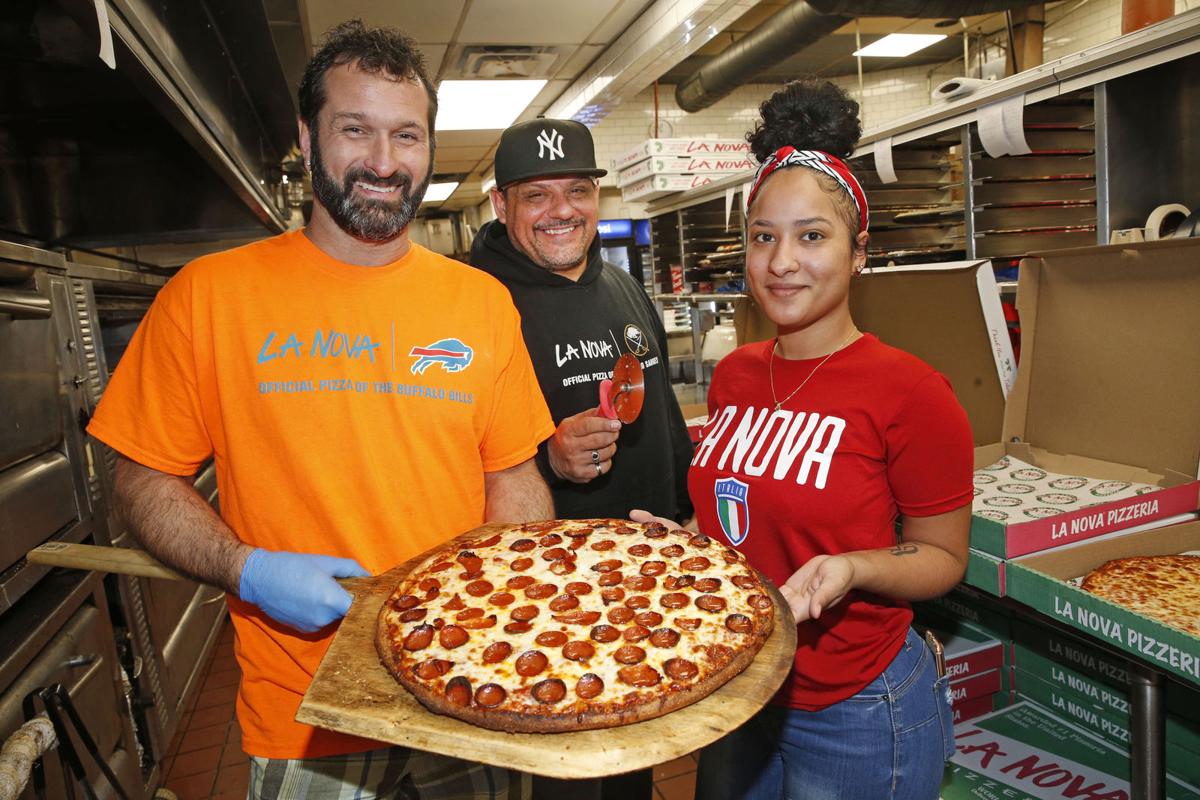 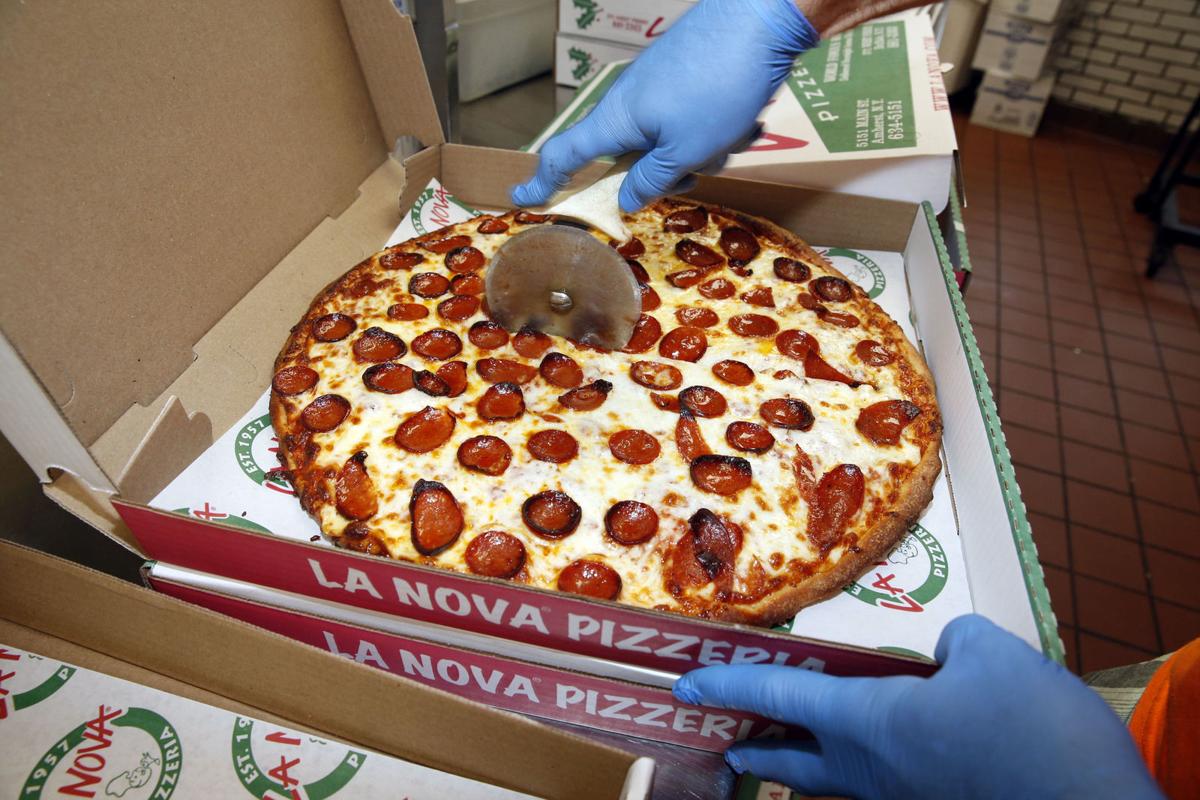 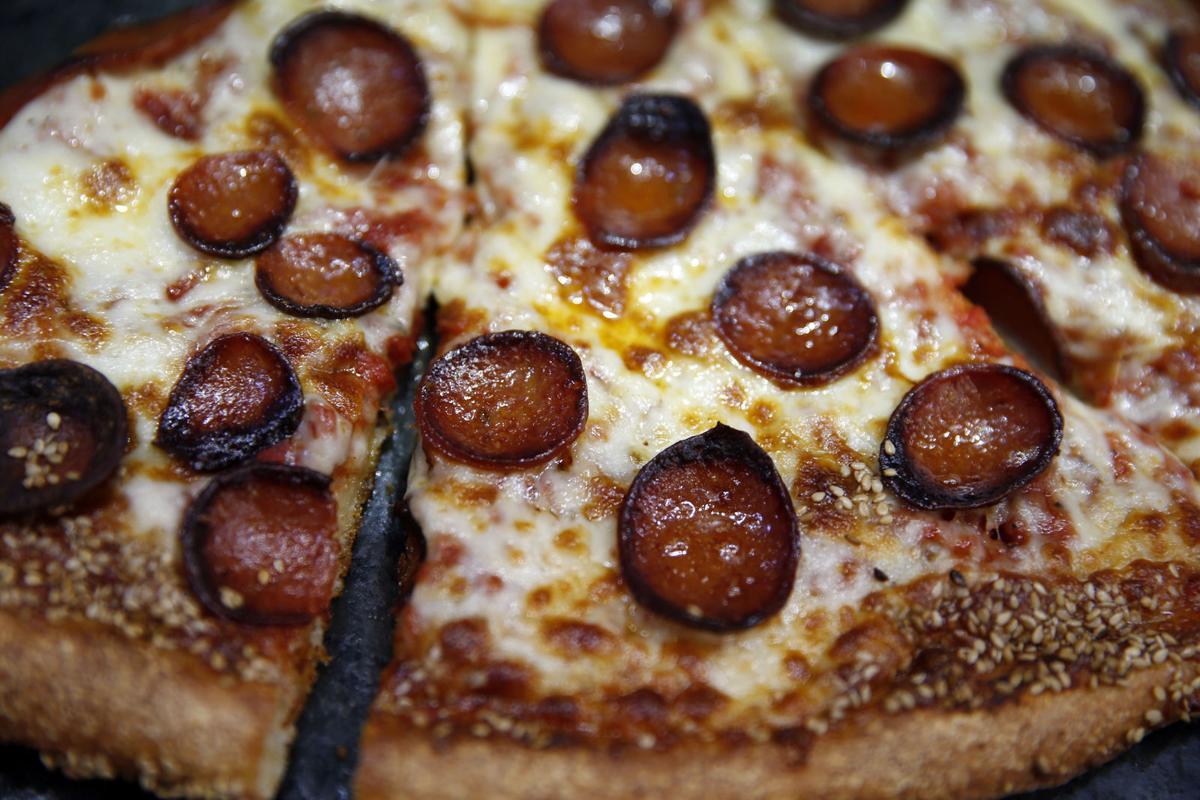 Slinging slices since 1957, La Nova, Spanish for “The Nova,” is a storied Buffalo pizza institution that should be one of your first merit badges on the quest to catch ‘em all. If you’re an off the wagon vegan or a rookie to the slice game who has somehow dodged the lifelong onslaught of La Nova pizza, I suggest you leave the house and eat some, if only for the sake of counting yourself among our city’s residents. I hear that’s how they’re taking the new census anyhow. It’s admittedly been a while even for yours truly, but this pizza cutter rarely has enough edge to circle back for a second slice so count yourself lucky, La Nova. Let’s get reacquainted.

Dough: The only area of improvement on the La Nova pie, the dough is a little softer than it should be and lacks the pull and bite of my preferred more glutinous recipe. That being said, it’s pleasantly thinner than traditional style would dictate, but preserves a lean layer of textbook Buffalo poof. Also there are crust seasoning options. If anyone out there owns a pizzeria, for God's sake, spend $20 on a dump truck of seeds and start offering sprinkle options for that dough ring because it’s a value-add that makes all the difference, you chumps! Sesame-encrust my casket. I’m crossing the river Styx with a free ticket to Flavortown.

Cheese: A SexySlices Standout. Perfection is relative, but La Nova achieved it in the crimson sauce-filled eyes of SexySlices (canning accident). A leopard-printed pattern of brown pock marks on tanned undertones from tip to tail, glistening with a thin sheen of oil. It chews, squishes, pulls and crunches on every single bite. It’s thick, but not egregious, and evenly spread across the entire surface. Outstanding.

Sauce: La Nova, like most of the old traditional pies, has a tinge of sweetness but is jam-packed with an army of oregano that lives just below the cheese should you happen to go spelunking (ready the Neosporin). It’s uniform in its smooth consistency but thinner and seemingly redder than the other pizza dinosaurs of our great city. I could do without the sugar to dial up the sharpness, but it’s in ideal quantity and good all around.

Pepperoni: Another SexySlices Standout. We were on the precipice of history with double perfect categories, but you had to go and short me on meat coins! A few more slices of pepperoni and we’re at mountaintop, because these are literally a cut above the competition. It’s 2019 and #thicc is in. These hearty slices are an undeniable presence from both a textural and flavor perspective. Crispy, slick, bouncy meat mats packing a peppery punch that a seasoned vet pairs with a Pepto-Bismol. It ain’t caviar and champagne, but it’ll slip some magic in your Tuesday night.

Overall: (A) Simply put, an eye-opening pizza that’s a refresher course on what to do right.

There’s a lot of unsavory trash talk about La Nova pie in some dissenting circles that I think subconsciously had me questioning the quality of the product. Either that or one too many slices of the weird fake “La Nova pizza” Delaware North schleps out in branded boxes at the Buffao Sabres games (a man's gotta eat). It’s comparatively pricey and it’s popular with tourists, which makes it a prime target for hipsters to suddenly hate on after Buffalo’s became “cool” (and apparently now a secret?). But after a welcome back slice, I realize I’ve been away from this titan for too long and I haven’t given it the credit it’s due. La Nova is a knockout in every category and defends its chops as a Top 5 Buffalo Pizza. They certainly don’t need to hear it, but I think some of us, including myself, needed a reminder.

6 beers to help put you in a proper fall mood

From marzens, Oktoberfest lagers and pumpkin ales to amber ales, porters and stouts, there are plenty of options for you to reach for this fall. Here are a few suggestions.

5 essential local beer pairings for your next Bills tailgate

Here are five essential local beer and tailgate food pairings as you cheer the Bills on their way to a successful season.

The Niagara Wine Trail will hosts its annual Share the Bounty event to benefit food banks, food pantries and charities on Nov. 13 and 14.