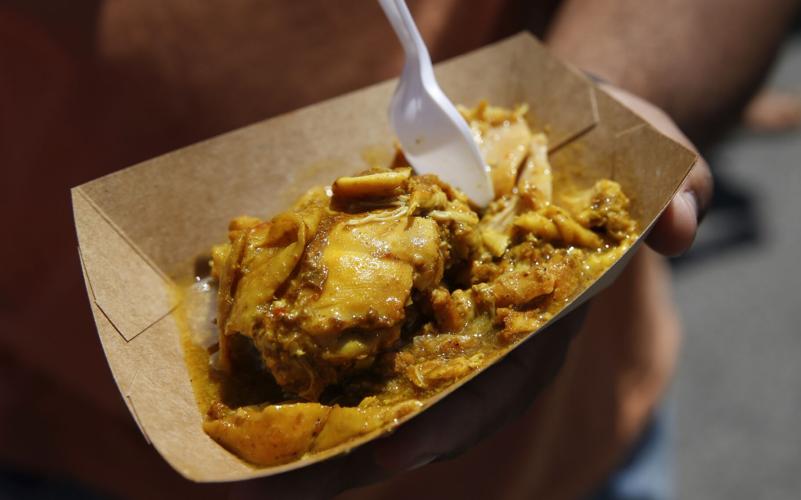 Curry chicken from Caribbean Flava won the Gusto Critic's Choice Award at the Taste of Buffalo Saturday. It's not pretty, but it is delicious. 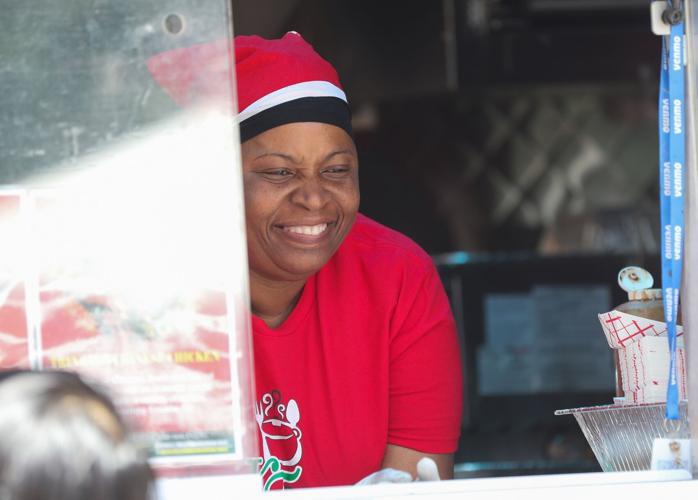 "You eat with your eyes first" may be a true saying, but it does a disservice to dishes like Caribbean Flava's curry chicken, the winner of the 2022 Gusto Critic's Choice Award at the Taste of Buffalo.

Never heard of the Jamaican restaurant? That's the beauty of the Taste. Caribbean Flava, a Niagara Falls brick-and-mortar complemented by a roving food truck, is a newcomer to the self-proclaimed largest two-day food festival in the country. The Taste of Buffalo continues from 11 a.m. to 7 p.m. Sunday in Niagara Square and north up Delaware Avenue to Chippewa Street.

With News Food Editor Andrew Z. Galarneau dabbling in dining delicacies in Toronto, I was dubbed to decide Gusto's favorite dish at the Taste. Despite Buffalonians' difference in palates and preferences, my goal was to pick foods I found tasty that the average Buffalo eater might waffle on trying.

Andrew Galarneau's top picks for the Taste of Buffalo

After years of experience and an all-access pass to the event’s eating opportunities, here's Andrew Galarneau's list of the stands he would show up to first at the biggest open-air buffet in New York State.

Caribbean Flava co-owner Tabitha Bernard said she imports seasonings for her curry – which she said is often called gravy – directly from Jamaica, blending with thyme, multiple types of garlic and turmeric for a complex flavor that's easily savored thanks to a lack of heat. The bone-in chicken, cooked over a fire, falls off the bone.

"It's a nice comfort food," said Bernard of the curry chicken (eight and four-ticket portions, Booth 6). "It brings some people back closer to Jamaica."

The Taste of Buffalo is ideal for eating with a sense of adventure; it's a commitment of between $2 and $6 for a portion, not $20-$30 for a full meal. Accompanying eaters urged Dalmatia Hotel's sweet and spicy plum wings (10 tickets, Booth 37) to be considered for the Gusto award, with praise for the surprising pleasantness of a ginger and plum glaze on a crispy, just-fried chicken wing. Not everyone will want to tackle a messy wing on the move, but it's worth a few post-noshing napkins.

KT Caribbean Cuisine snagged the festival's Rookie of the Year, and the food truck melded flavors from Trinidad and Tobago and China to land on Trinbago Chinese Chicken (eight tickets, Booth 25). The flavors scream umami and the meat falls off the bone. Pat yourself on the back for trying something unusual.

Desserts not to miss

The fried ice cream from the Taste of Siam (10 tickets, Booth 21) won the festival's Best Overall Item and was among the finalists for Gusto recognition, too. Vanilla ice cream, coated in pound cake and then frozen, is fried to order on-site and topped with strawberries, blueberries and whipped cream – culminating in fresh flavors and contrasting textures that are not simple to pull off in a bulk service environment like the Taste.

"I would put some of that pound cake in my pocket," said a companion. Taste of Siam's booth shined – workers made almost everything from scratch under the tent, yet still were among the friendliest in the festival.

"Flan" might sound like the world's most boring dessert, but at Mi Isla (seven tickets, Booth 33), it's pure decadence. The traditional Puerto Rican dessert is basically eggy custard topped with caramelized sugar, but it took significant restraint to not order a second helping.

Sweet Melody's Red, White and Blue Sundae (eight tickets, Booth 36) was incredibly refreshing thanks to the lemon ice and – at least as far as desserts go – fairly healthy. Consider it for an end-of-festival palate cleanser.

Pizza Amore, a veteran at the Taste of Buffalo and the Erie County Fair, has churned out thousands of wood-fired pizza slices to festivalgoers. But its Buffalo mac and cheese (eight or four-ticket portions, Booth 38) made the pies play second fiddle Saturday. Cavatappi noodles – not your everyday mac-and-cheese pasta – were lathered in a creamy house-made sauce featuring cheddar cheese and Velveeta, plus a touch of heat.

Every Taste of Buffalo participant must offer a healthy option – the product of a partnership with Independent Health – and the king still rules in this category. Galarneau picked Water Lily Cafe's cucumber salad (eight tickets, Booth 15) as last year's winner, and we could not find anything to dethrone the colorful bowl of fresh veggies in a tangy dressing.

Take in a smorgasbord of Buffalo-area food festivals

Taste of Buffalo is only one of a multitude of food-centric local summertime festivals. In addition to the focus on food, they all have other makings of festivals such as music, rides and other activities.

Buffalo News editor Eric DuVall, a longtime Taste of Buffalo volunteer and board member who died earlier this year, was honored at this year's Taste, and his family and friends selected the Eric DuVall Memorial Best of Buffalo Award. The Flaming Fish Food Truck and Restaurant's shrimp po'boy took home the honors.

"You eat with your eyes first" may be a true saying, but it does a disservice to dishes like Caribbean Flava's curry chicken, winner of the 20…

At Compass Run, Louisiana heartland treasures make it to Buffalo

Compass Run’s menu zigzags across the landscape of Louisiana but also the world of James Roberts’ hunger. If you trust his compass, it’s the trip of a lifetime.

Eddie Murphy insists he never 'made fun' of Michael Jackson

Eddie Murphy insists he never 'made fun' of Michael Jackson

Curry chicken from Caribbean Flava won the Gusto Critic's Choice Award at the Taste of Buffalo Saturday. It's not pretty, but it is delicious. 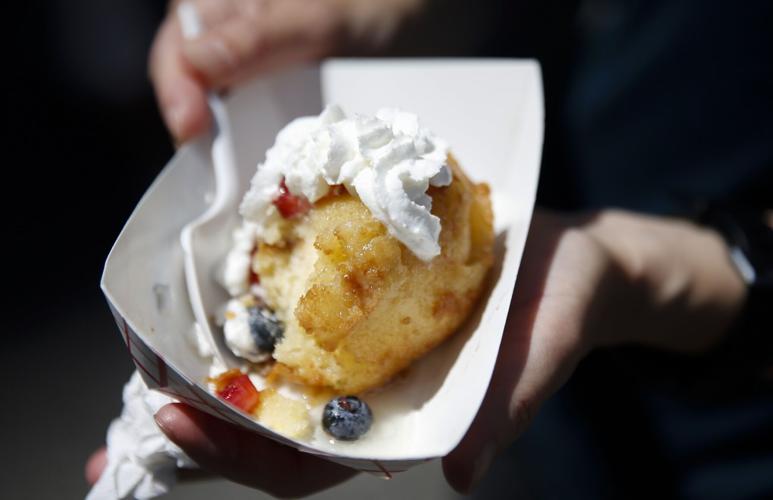 Fried ice cream from Taste of Siam won the Best Overall Item at the 2022 Taste of Buffalo. 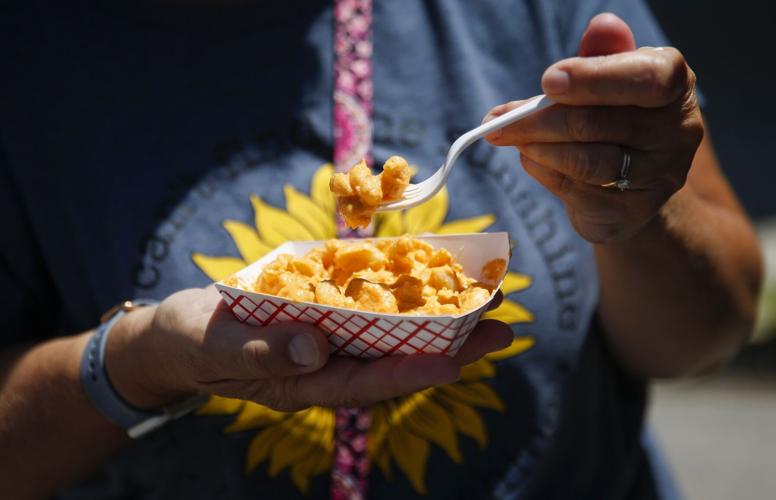 The Buffalo mac and cheese from Pizza Amore was a surprising, stick-to-your-ribs comfort food star. 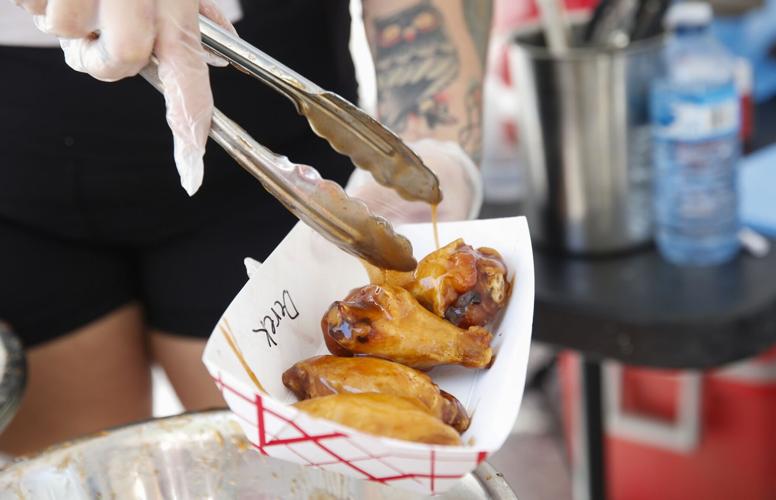 Sweet & spicy plum wings from Dalmatia Hotel at the Taste of Buffalo should be embraced by adventurous eaters. 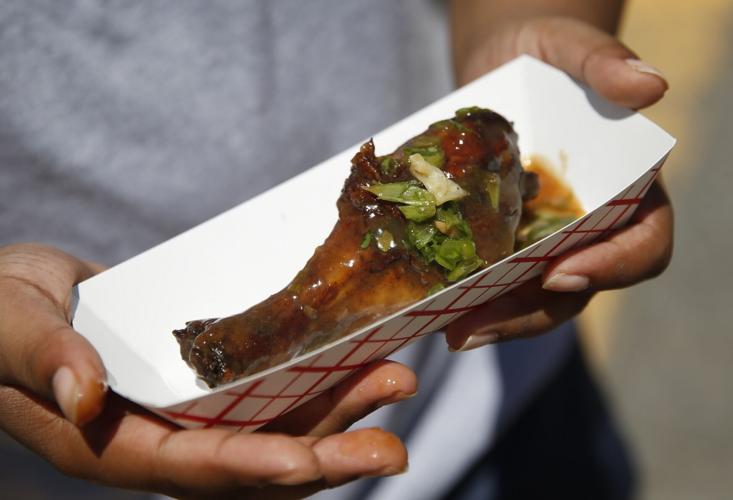 Trinbago Chinese Chicken from KT Caribbean Cuisine at the Taste of Buffalo.