"At the end of the day, it’s always going to come down to flavor preferences. You can’t get around it," says Sexy Slices of the well-known Buffalo Pizza Review. His No. 1? Lock City Pizza in Lockport. (Robert Kirkham/Buffalo News) 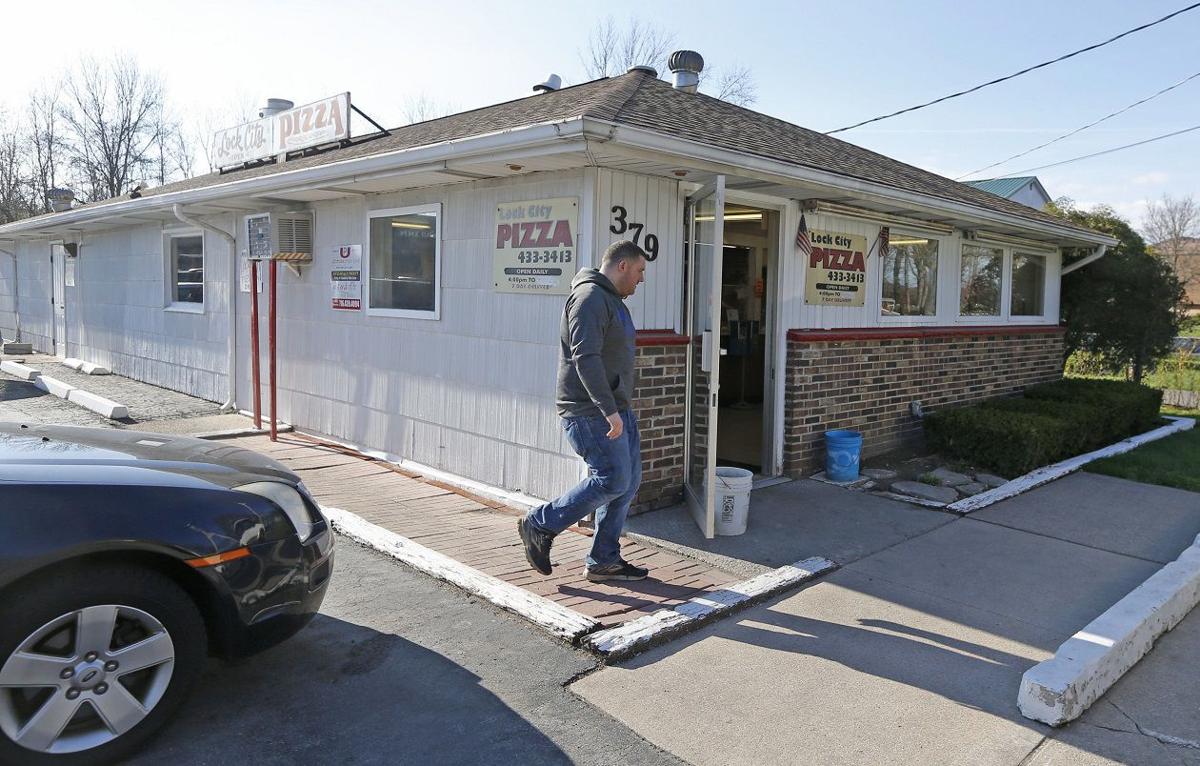 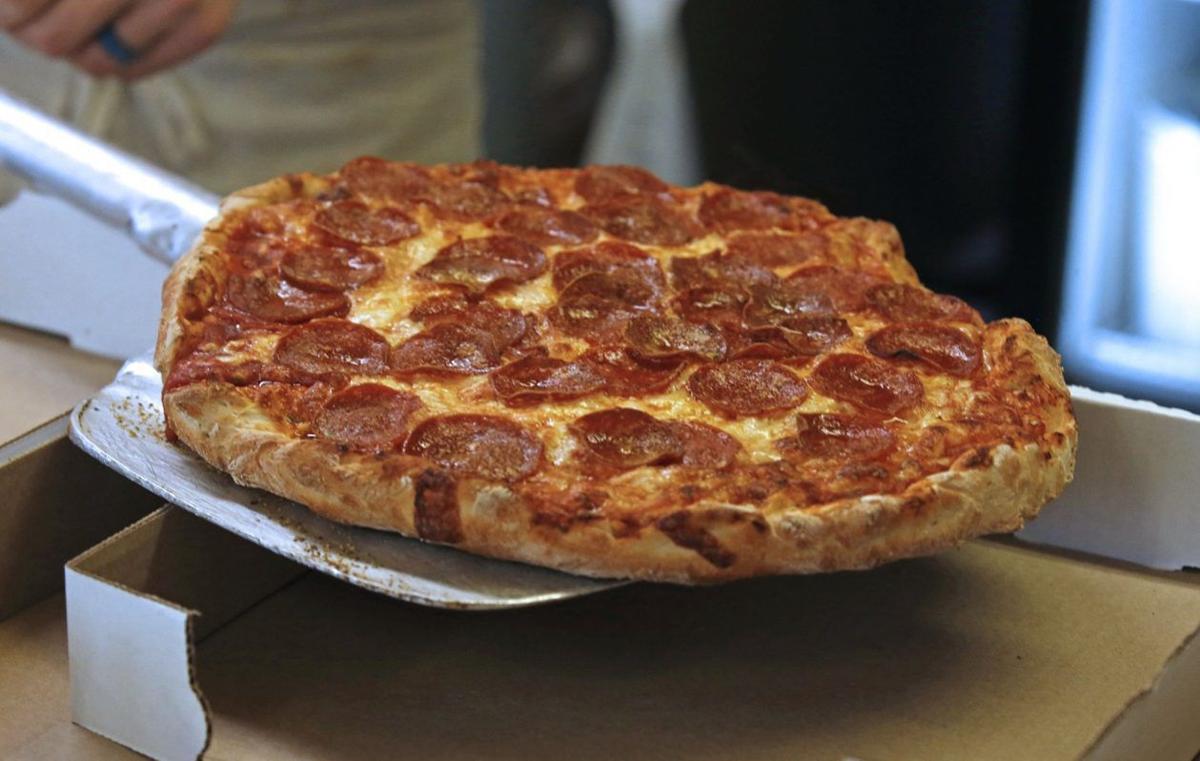 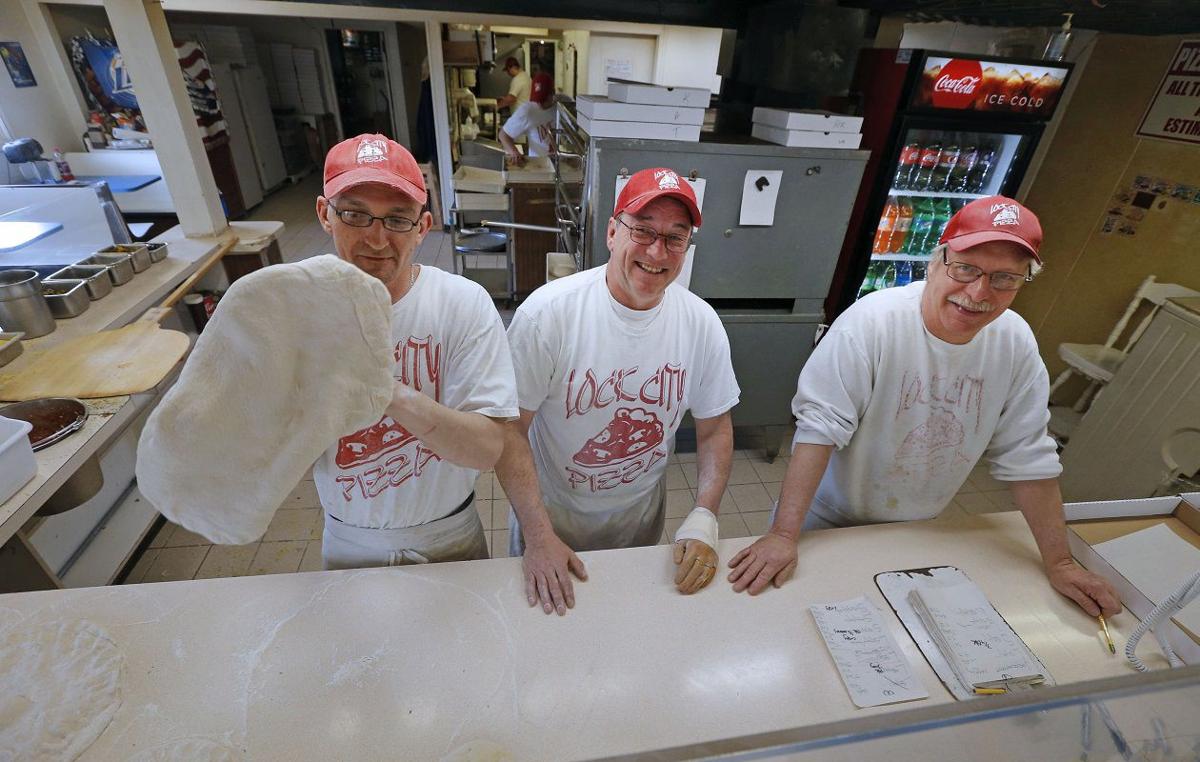 With a combined 70 years of pizza making experience, the assembly line crew, from left, Arnie Tillotson, Jay Dunn and Reggie Myers at their station. Simply making classic pizza is a daily routine for the folks at Lock City Pizza at 379 Davison Road in Lockport and has been delighting fans for decades. This was on Wednesday, April 24, 2019. (Robert Kirkham/Buffalo News) 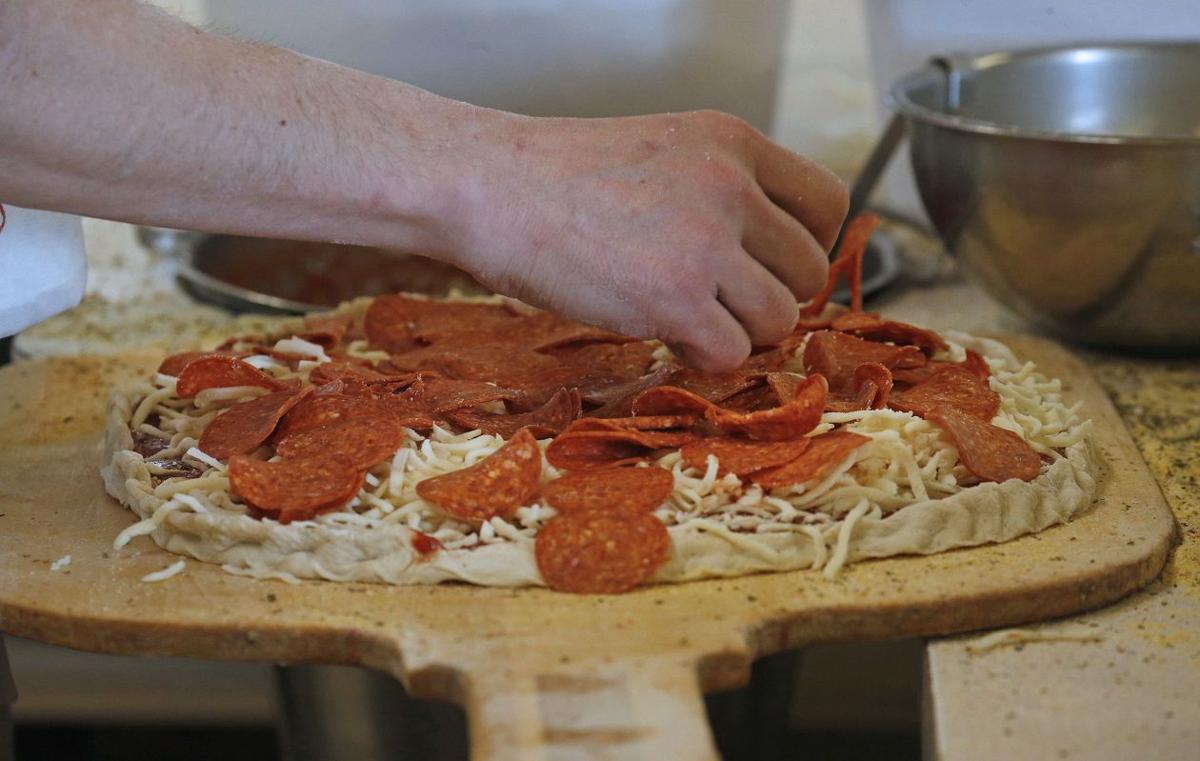 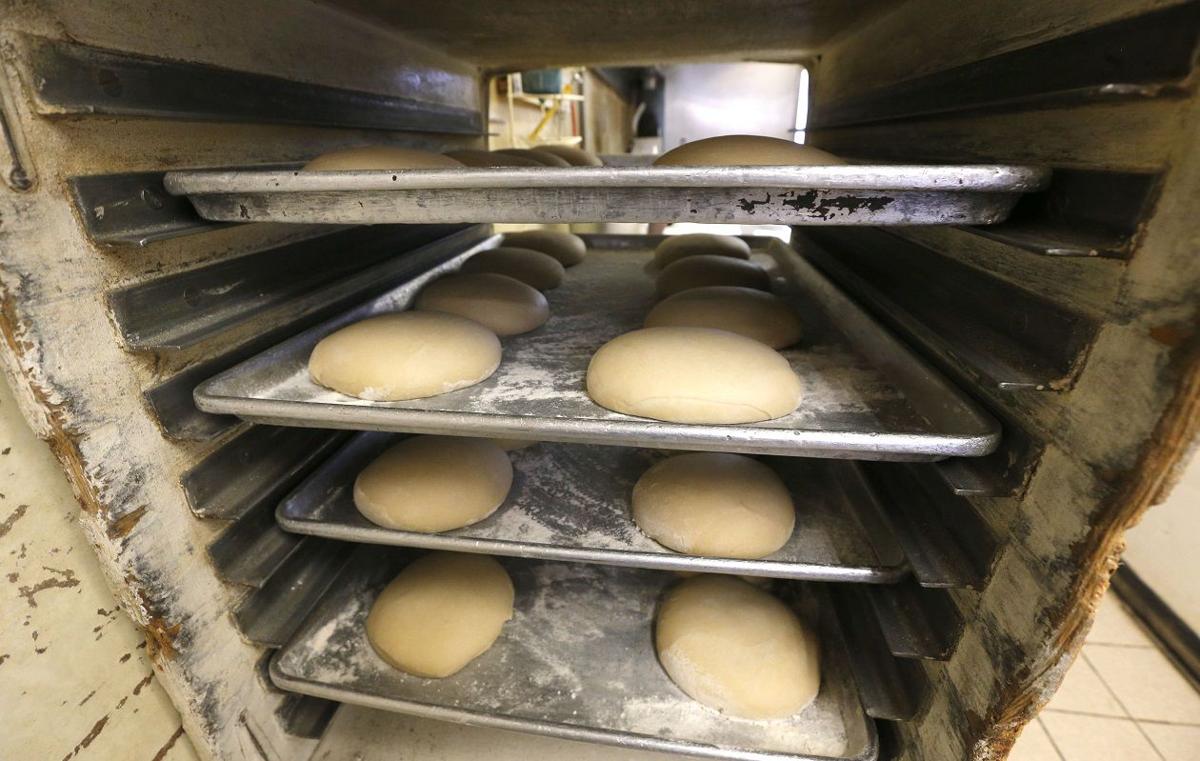 Most Buffalonians agree Buffalo has the best pizza in the world – but just try to get them to agree which place specifically represents the pinnacle of perfection.

Bocce? Imperial? Picasso? La Nova? (I’ll give you a moment to fight among yourselves.)

If you consider yourself something of an expert on the best Buffalo-style pizza in town, let me introduce you to a man we’ll call Sexy Slices. It is not, as you may have guessed, the name his parents gave him.

It’s an internet pen name that fits his self-appointed mission: to review and rank the pizzas of Buffalo. “Buffalo Pizza Review,” his Instagram account says. “I pass eternal judgement on Buffalo's pizzerias so you don't have to.”

Before you scoff, you should know this guy is serious. He has definitely tried more Buffalo pizzerias than I have, or you either, I bet. How many Buffalo pies can you describe for us?

Since 2015, Sexy Slices has tested and rated nearly 100 Buffalo-area pizzerias, from Newfane to Hamburg. Lately it’s been once a week he heads out after his office job and homes in on a pizzeria he’s never been to, usually a spot suggested by one or more of his 5,000 Instagram followers.

He orders a large cheese and pepperoni, and waits for the truth to arrive, written in pepperoni, cheese, dough, and sauce. He grades each of those elements, generating an overall grade, which are gathered on a Google spreadsheet for all to review.

Sign up for the weekly Food & Drink newsletter: Restaurant openings and closings, interesting tidbits about Western New York's dining scene and more delivered directly to your inbox each Friday.

Readers credit him with guiding their pizza intake. “This account is a real service,” one wrote after his recent Macy’s Place Pizzeria review. “Been living in Cheektowaga for over 6 years and either opting for sub-par pizza that’s close (Johnny’s) or good pizza that’s far-ish (Picasso’s) meanwhile overlooking this gem that’s been right under our noses the whole time.”

They also blast him for knowing nothing if he slights their favorite. “Which is funny, because I’ve probably had pizza from more Buffalo places than anybody,” he said. “I’m not even making the definitive claim that this is the best pizza in Buffalo. It’s my favorite pizza in Buffalo. At the end of the day it’s always going to come down to flavor preferences. You can’t get around it.”

Where do those preferences come from? We talked about it on the way to his No. 1 favorite, top-ranked pizzeria of all. Which happens to be the first pizza he ever loved as a child: Lock City Pizza, 379 Davison Road, Lockport.

“My oldest pizza memory is the first time I had Lock City,” he recalled. “It was at a family party, and my uncle was a fan. But I’d never had it, because as a child, you are subject to the pizza of your parents.”

He’d heard of Lock City, but he’d also heard his parents’ criticisms: too greasy, too salty. “My parents are napkin dabbers,” he said, “and this is not a pizza for napkin dabbers.”

At first bite, “I remember thinking, ‘This is amazing.’ This was hitting everything that the pizzas I’d been eating up to that point were not giving me.”

Looking back, he said, “To some extent, all the pizzas I’ve eaten since were an attempt to get back to that pie.”

Fortunately for Sexy Slices, his childhood pizza love yet lives. He called in the order as we drove, using the clipped tones of someone delivering information in code to a person in a hurry. When they’re busy the phone can go unanswered, he said.

From my perspective, Lock City did a lot of the little things right. They make their own dough every day, and shred mozzarella from blocks as needed instead of using dust-laden pre-shredded cheese.

A mountain goes onto each stretched-out pie, over the generous puddle of smooth sauce, then a dusting of garlic, oregano, and grated parmesan and romano. The pepperoni isn’t the currently celebrated cup-and-char, but it is applied by the fistful. Its generously layered pepperoni is a rebuke to many of the Buffalo Pizza Review entries, with eerily neat pepperoni patterns, spaced out for maximum distance, a throwback to the stinginess of school cafeteria pizza.

Baked on a layer of cornmeal, right out of the oven the Lock City crust has an audible crunch, like a fresh baguette. It’s all the flavor of a crusty loaf, chewy and sturdy. It has to be, to hold that bounce-house mattress of mozzarella without drooping. This was a burly, feed-the-masses pie in the classic Buffalo style.

“This is the way it’s always been,” Sexy Slices said. In a world where some pizzerias are run by teenagers who would rather be looking at their phones, Lock City delivers another crucial ingredient: consistency.

Later, owner Carol Riddle mentioned the chief Lock City pizzaiolas have been honing their craft for 20 years. They have their pizza game so dialed-in that they will take orders for half-baked, three-quarter baked and one-and-a-half baked pizzas, allowing regulars an exquisite amount of control.

At $19.95, tax included, for a large cheese and pepperoni, it’s also competitively priced. Which explains why there was always a customer waiting, and the phone rang heedlessly.

“I found their full bake the best, but some people don’t like it so tough and crispy,” he said. “After having all the pizza I’ve had in Western New York, there are only a few that break form, and offer something distinctive that truly stands out,” he said. “This one breaks form.”

Despite all the miles he’s put on his car, and the lame pies he’s endured, “I haven’t really started,” he mused. “There is no official number, but there are an estimated 600 pizzerias in Buffalo, so when I hit 100, I’ve only gotten to one in every six. Which I’m happy with, but it still leaves a lot on the table.”

How much pizza is enough? He allows that he’s considering taking another break after passing 100, to recharge, and get his hunger back. “I’d definitely say by the end of this tour, I’ve visited all the must-hits I’ve heard about from people. I don’t think there are any big ones left on the table.”

That said, some of his most remarkable discoveries have come from places with a single nominator, he noted. So you never know. It's part of what keeps him going. At the end, he said, “I’m sure someone will tell me I screwed up.”

At this point, he’s heard many criticisms of his criticisms. He listens, but he can’t change his tastes, and he’s not going to apologize for that.

One change he’s considered is giving the dough score more weight in the overall grade, since it’s the foundation of the entire enterprise. But then how would he rework years of grades?

7 seasonal ales to help make your holidays merry and bright

Contrary to popular belief, holiday beers aren’t all dark beers, as evidenced by this list that includes IPAs and golden ales.

"At the end of the day, it’s always going to come down to flavor preferences. You can’t get around it," says Sexy Slices of the well-known Buffalo Pizza Review. His No. 1? Lock City Pizza in Lockport. (Robert Kirkham/Buffalo News)

With a combined 70 years of pizza making experience, the assembly line crew, from left, Arnie Tillotson, Jay Dunn and Reggie Myers at their station. Simply making classic pizza is a daily routine for the folks at Lock City Pizza at 379 Davison Road in Lockport and has been delighting fans for decades. This was on Wednesday, April 24, 2019. (Robert Kirkham/Buffalo News)