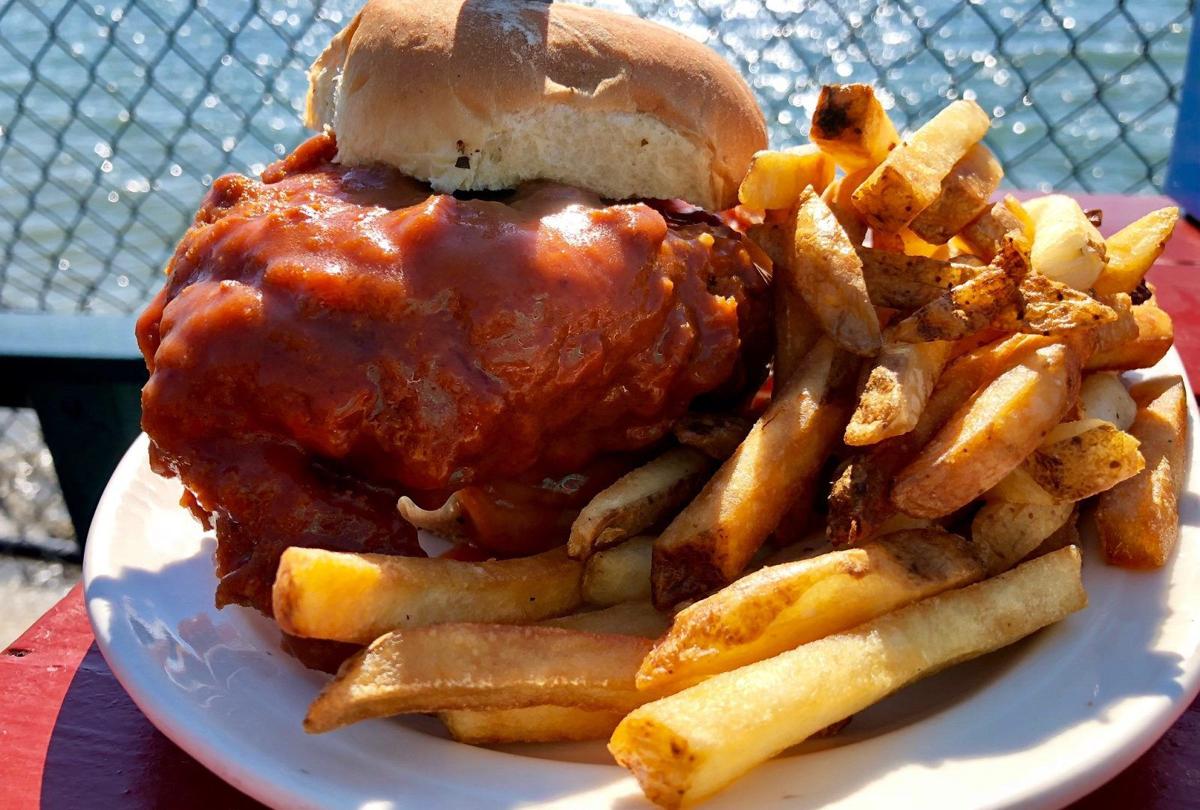 Hoak's massive Buffalo chicken sandwich smothered in homemade wing sauce has been a standout on Hoak's Lakeshore menu for 30 years. (Elizabeth Carey/Special to The News) 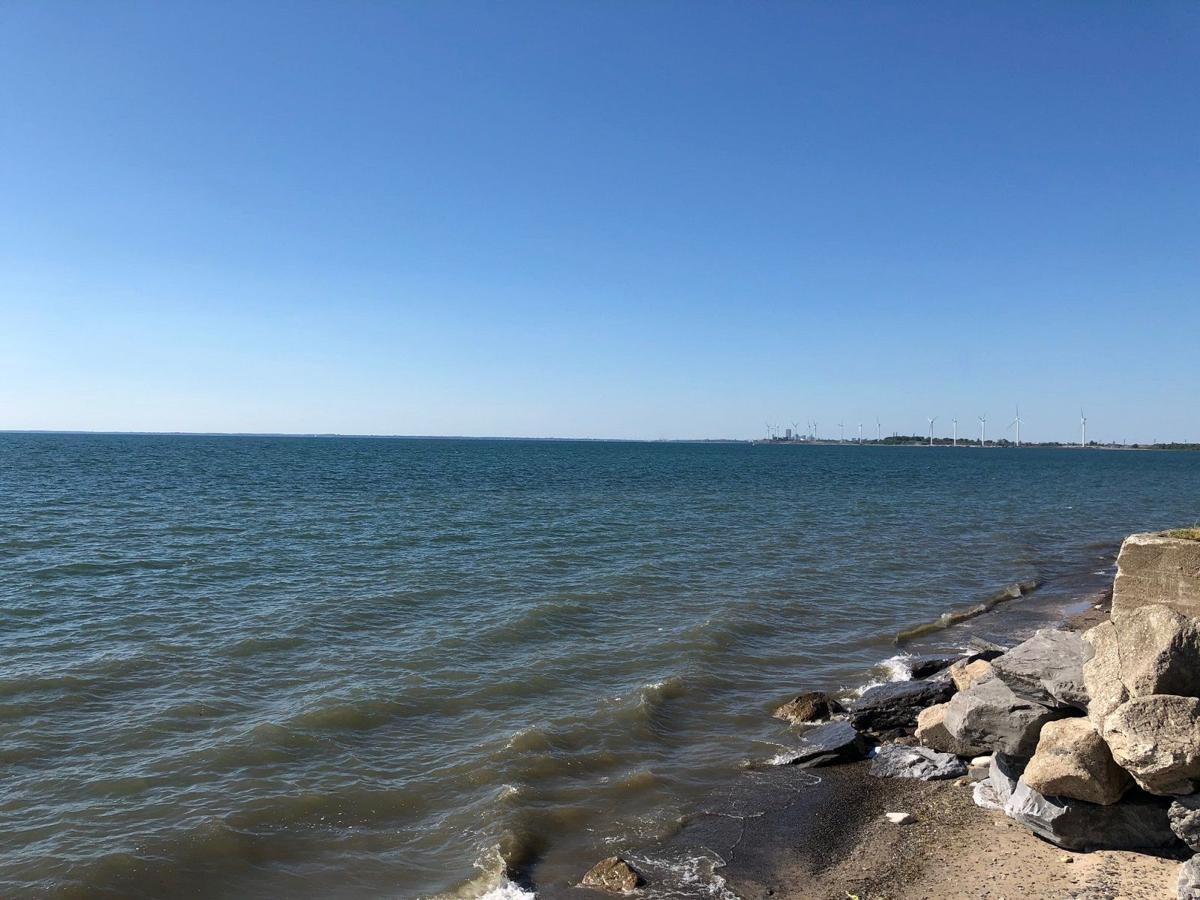 The view of Lake Erie is a free side dish at Hoak's Lakeshore, which is celebrating the 30th anniversary of its chicken sandwich. (Elizabeth Carey/Special to The News.) 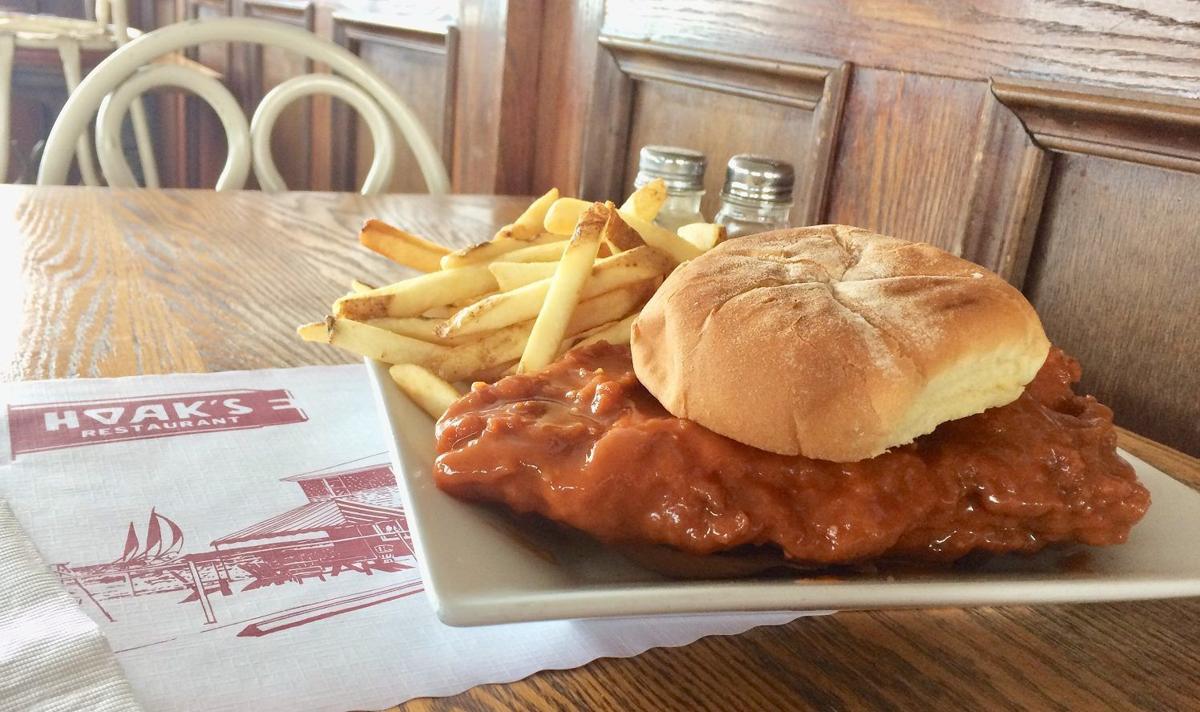 Customers will ask, "What is that?" when they see Hoak's Buffalo chicken sandwich, which is also available grilled though most go for the deep fried version. (Photo courtesy: Hoak's Lakeshore.)

Menu items often come and go at restaurants as owners try to keep things new and exciting. But every now and then a new creation becomes a standout – a dish that somehow stands the test of time and keeps customers coming back for more. A dish like that earns a permanent place on the menu.

When Mike Hoak, former owner of Hoak’s Lakeshore Restaurant, and Mike Buntich, former cook, created a Buffalo chicken sandwich 30 years ago, little did they know that it would be a standout that remained a top seller three decades later.

Question: “Buffalo chicken”-flavored items are common today, but that wasn’t the case 30 years ago. How did they come up with the sandwich?

Kevin Hoak: They were ahead of their time and wanted to try something different and new. They said, “Everyone likes chicken wings so why not make a big version of a chicken wing as a sandwich and put homemade Buffalo-style sauce on it?”

Q: Is the homemade sauce a key ingredient?

A: Yes - it’s a wing sauce that goes on the sandwich and on our wings, too. We can’t give the recipe for it. A lot of people ask for the Buffalo sauce and use it for dipping fries or bread even if they didn’t order the sandwich.

Q: How is your Buffalo chicken sandwich made?

A: They pound out and deep fry the chicken breast and add the sauce. You can also get it grilled for a healthier route. They pound it out and grill it and add sauce and cheese if you want.

Q: It sounds pretty easy. What makes it stand out?

A: It’s huge. There’s no room for anything else on the plate. It makes the Kaiser roll look pretty small. It’s good and it’s big. It fills you up. Some people cut off the ends and cut it in half and still have a whole sandwich when they are finished. They end up taking it home so you get your money’s worth. For $11 you’re basically getting two sandwiches.

Q: What’s the typical reaction from customers who order it?

A: We have given gift certificates for a Buffalo chicken sandwich. People who haven’t tried it come in and use their gift certificate and it comes and they are very excited. They can’t believe how big it is. It’s pretty funny - someone will order one at the bar and regulars know what’s going on, but there might be a couple next to them and they say, “What the heck is that? Is that a fish? What is that thing?” We tell them, “It’s a deep-fried chicken breast.”

Q: What has made the sandwich stand the test of time?

A: It’s the best chicken sandwich in town. It’s the biggest, the freshest and our recipe sauce is phenomenal. It’s a very good seller. We are known for seafood and scallops and beef on weck, but people do come in just for the sandwich. It’s a meal in itself. You can eat that thing for three days. Out-of-town people who moved away to places like New York City or Boston will make a point to stop at the restaurant when they come back to visit family and friends.

Q: Have you ever seen anyone finish a whole one?

A: I’ve seen someone eat two of them, but that was only one time – it was a St. Francis guy from across the street. Ninety percent of people take a portion home.

The new fair foods for Erie County Fair 2021 show considerable creativity with an ounce of restraint.

Exploring the state of the Western New York beer scene

"I think we all learned to value the togetherness, empathy and kindness that comes from gathering in communities – big or small,” said Chris Smith, co-founder of Community Beer Works.

Turkish cuisine and I go way back, at least in my head. That National Geographic cover story about Istanbul must’ve had photographs of Byzanti…

Hoak's massive Buffalo chicken sandwich smothered in homemade wing sauce has been a standout on Hoak's Lakeshore menu for 30 years. (Elizabeth Carey/Special to The News)

The view of Lake Erie is a free side dish at Hoak's Lakeshore, which is celebrating the 30th anniversary of its chicken sandwich. (Elizabeth Carey/Special to The News.)

Customers will ask, "What is that?" when they see Hoak's Buffalo chicken sandwich, which is also available grilled though most go for the deep fried version. (Photo courtesy: Hoak's Lakeshore.)