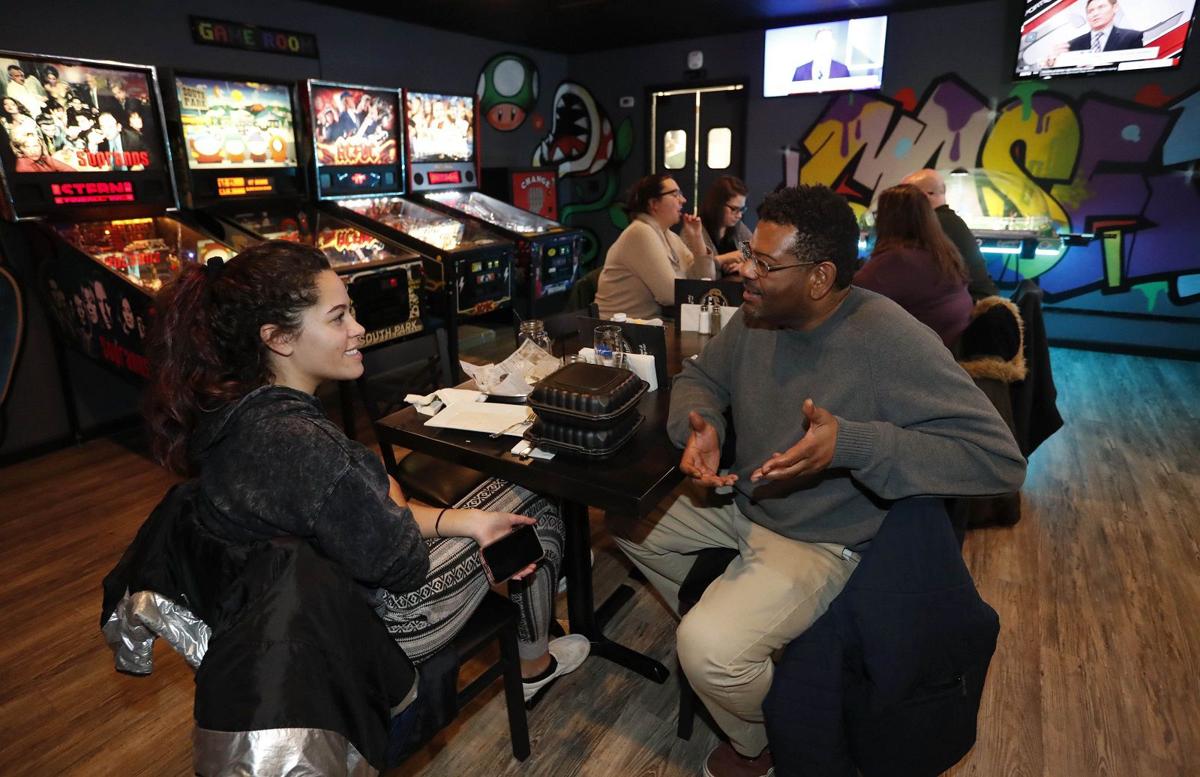 Nora Graham, 9, and his father Lemuel Graham talk after dinner. Graham brought his two children for dinner and so his son could play video games. (Sharon Cantillon/Buffalo News) 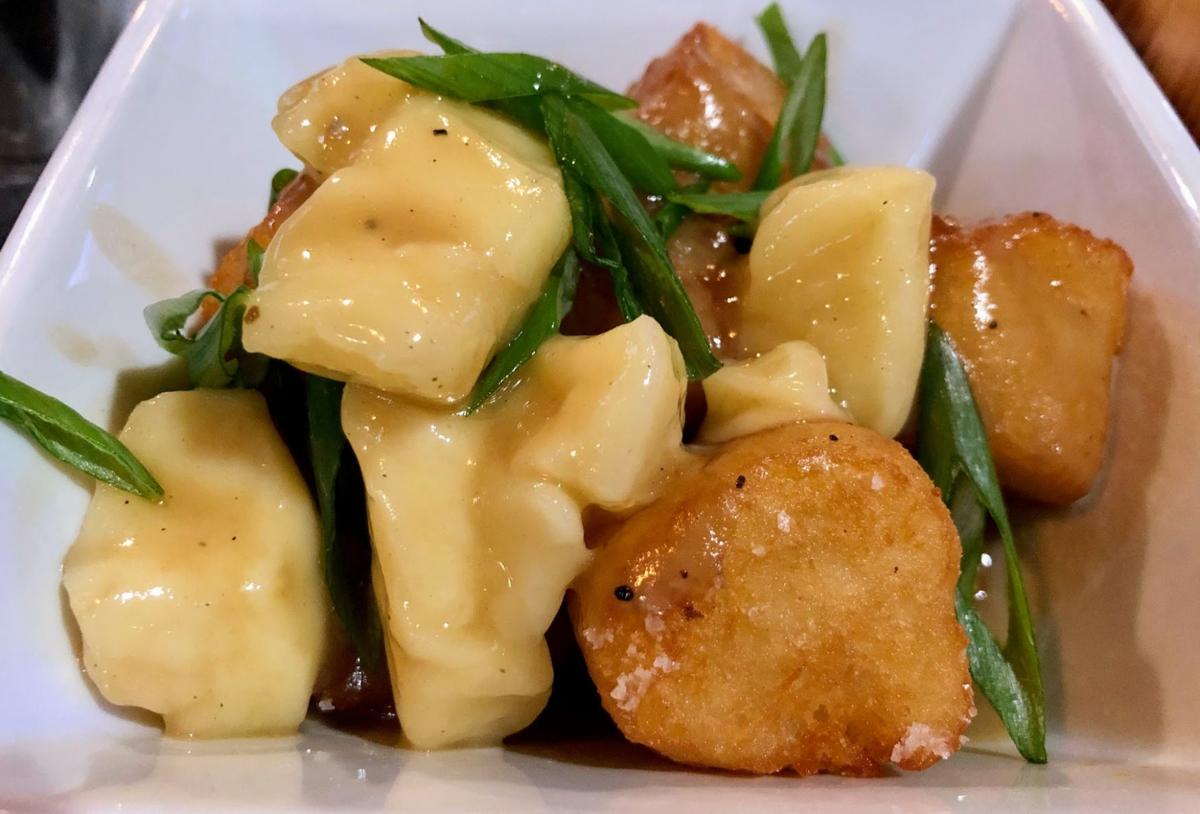 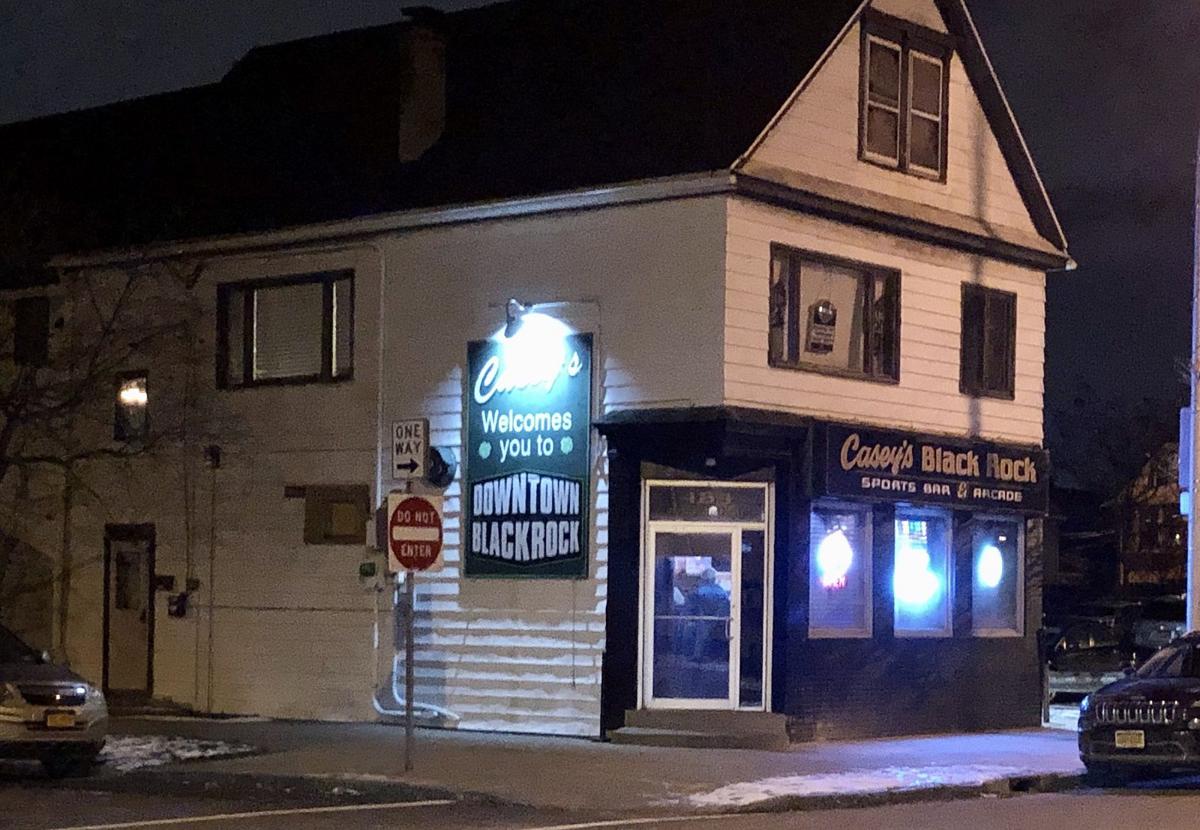 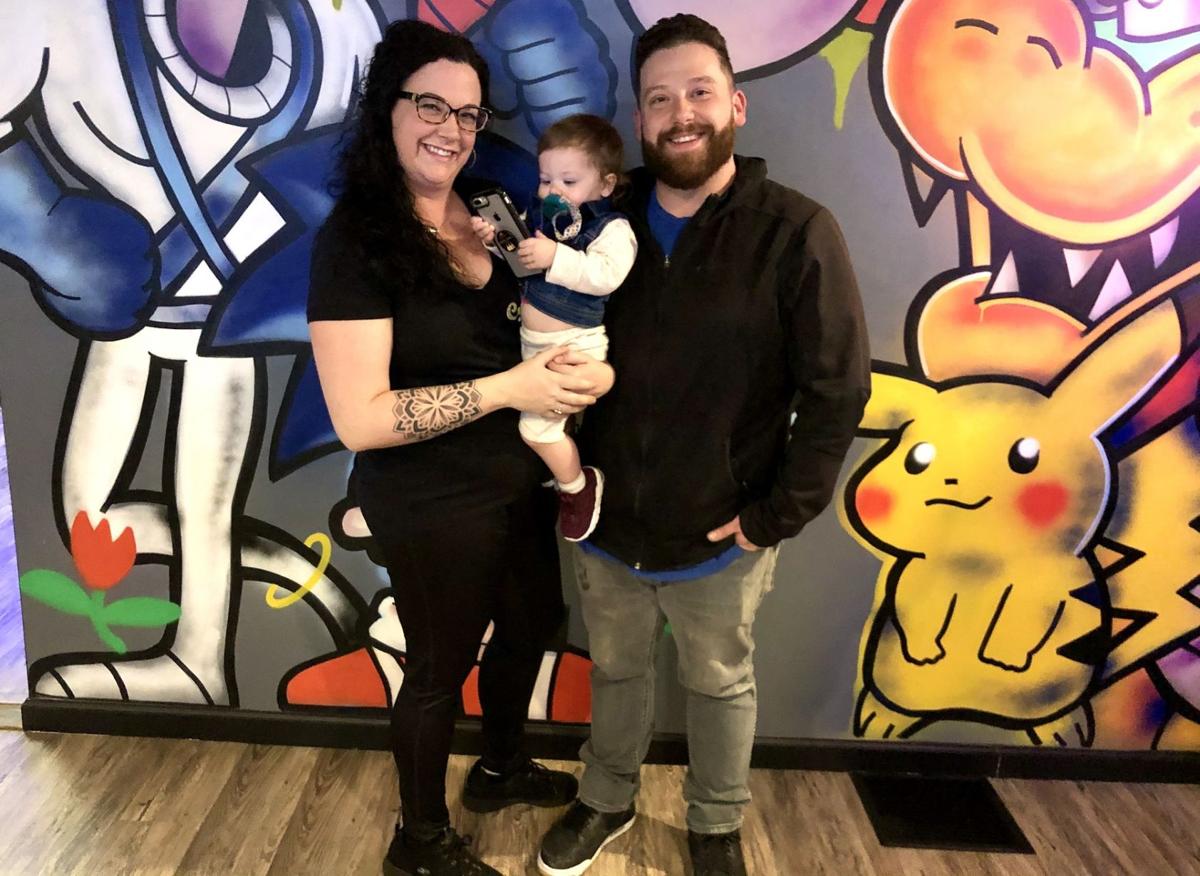 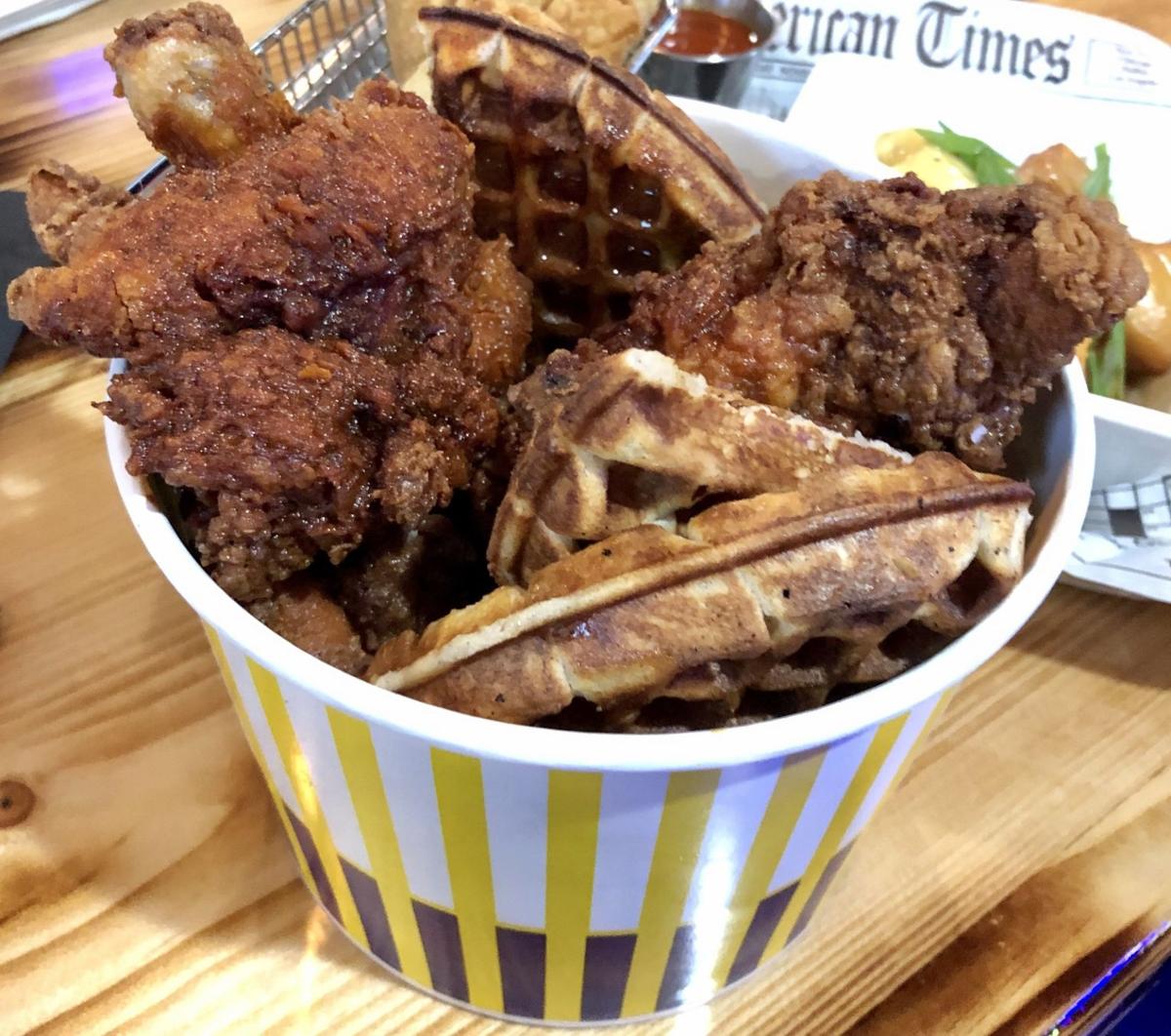 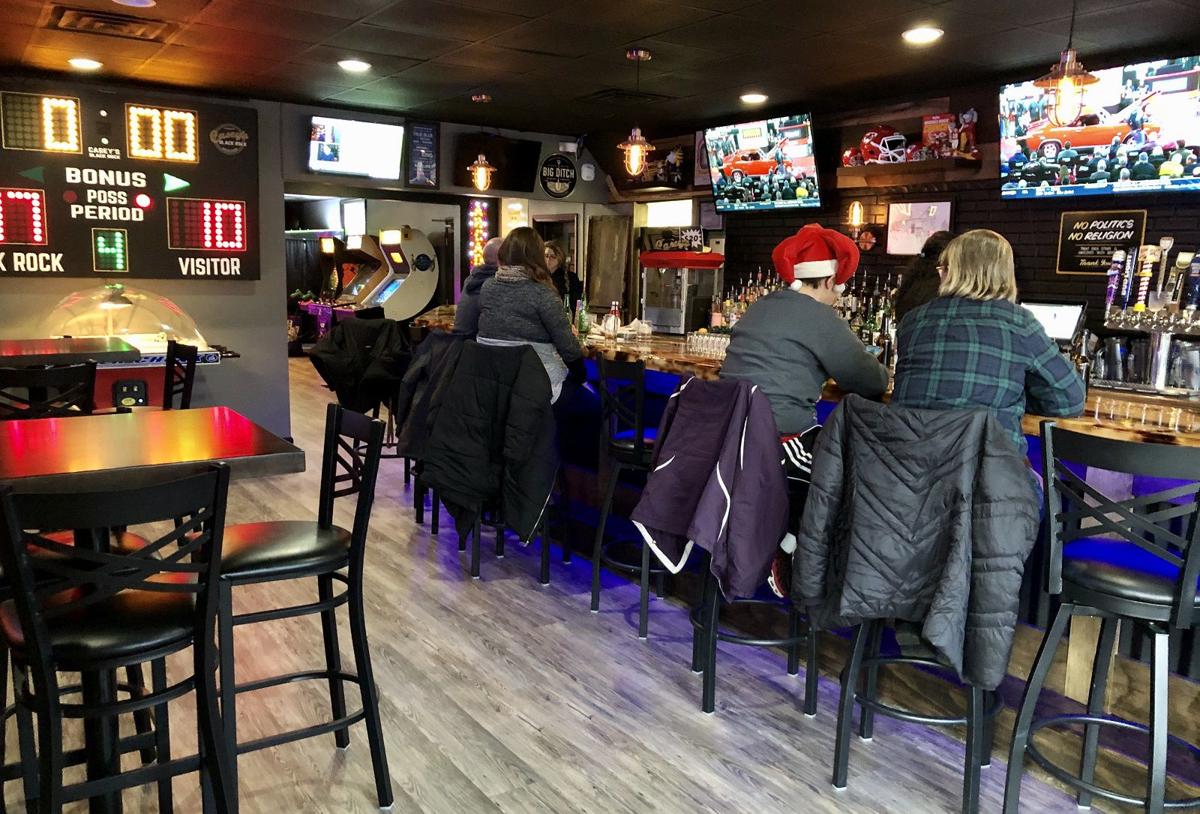 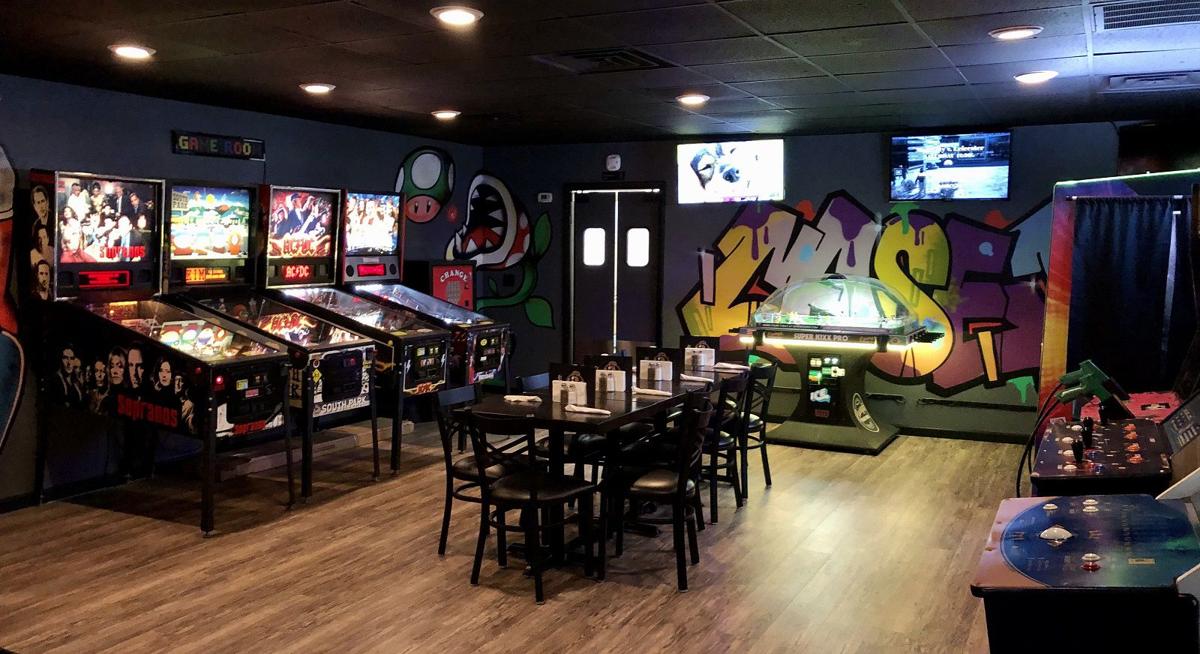 The arcade and back dining area of Casey's Black Rock. (Ben Tsujimoto/Buffalo News) 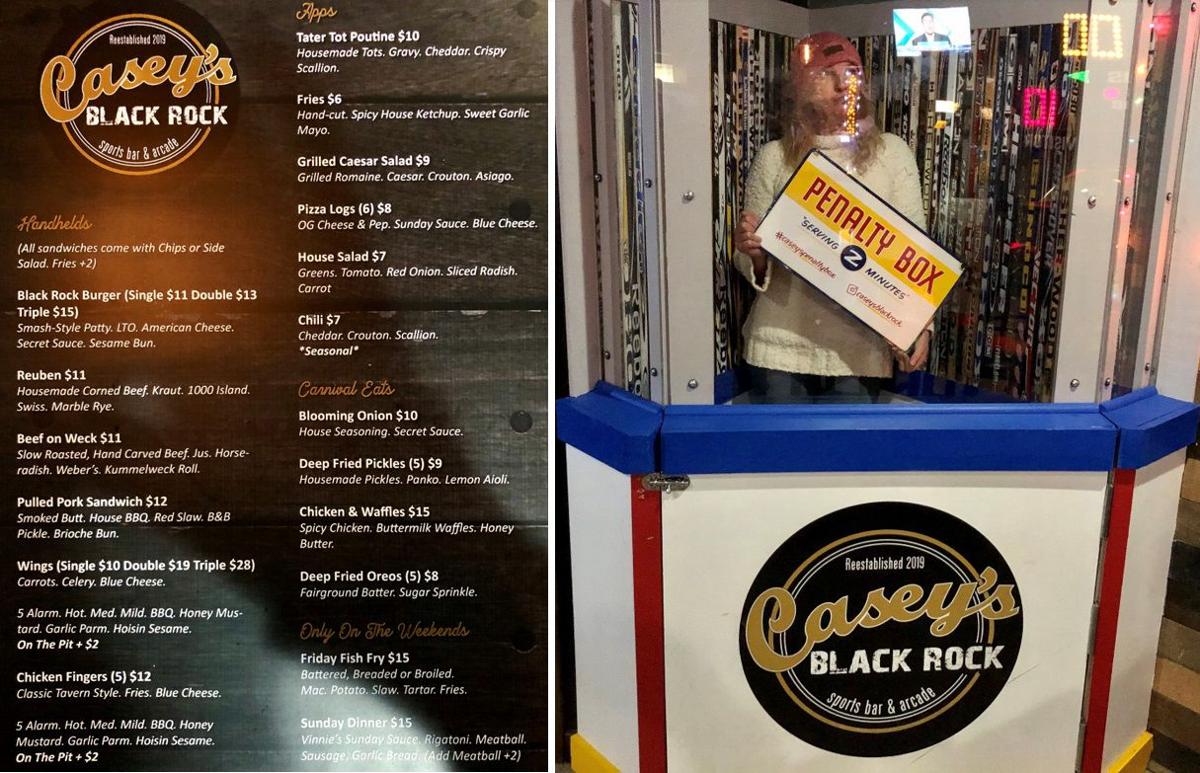 Casey's Black Rock's food menu, left, and the scene inside the penalty box, where unruly customers may be sent. Please click for a larger image. (Ben Tsujimoto/Buffalo News)

Co-owner Joelle Garofalo said it best when describing the new Casey's Black Rock. "It's a party bar with fat kid food," she quipped.

That's a departure from the previous iteration of Casey's Tavern, a longtime neighborhood dive at 484 Amherst St., not far from Wegmans, that closed in June 2018. Vincent Garofalo, Joelle's husband and a Casey's bartender for nearly four years, purchased the business and spent the next year and a half rehabbing and freshening the dilapidated bar.

Casey's Black Rock delivers on its promise of a lively atmosphere, with four themed pinball machines (South Park, AC/DC, Wrestlemania and the Sopranos), bubble hockey, an old-school Pac-Man arcade game, a Buffalo-made Super Kixx Pro and even a pseudo-lighthearted "penalty box" for unruly customers who need a brief timeout.

Local graffiti/tattoo artist Mic Excel helped with the eye-catching game room, which also touts a few tables for dining in. Football memorabilia of the Kansas City Chiefs and Buffalo Bills – Vincent's two favorite NFL teams, in that order – is prominent behind the bar, as is a sign that reads, "No politics, no religion."

"We're not interested in being pretentious," Vincent said, describing his aim to run a neighborhood-friendly bar to suit any demographic. Casey's is essentially a sports bar with games, but with more character than others described by the same general traits.

The alcohol-free penalty box is a prime example, adding a layer of amusement while doubling as a chance for owners and bartenders to tame late-night cavorting (spilling a drink, causing a ruckus, starting an argument, any sort of mischief).

An oversized scoreboard in the main bar area counts down from 2 minutes, with an awkwardly loud buzzer sounding when the stay is over.

Silliness aside, given his history there, Vincent intentionally appealed to longtime neighborhood regulars – who took more than a year to win over, he remembers – in addition to the Garofalos' friends in the restaurant industry and whomever evolving Black Rock attracts.

"When you have a customer base that good for 50 years almost, they deserve the upgrade as much as anybody," Vincent said. "They come in and I see the look on their faces, and [they'll say], 'You did good, you kept it, it's still Casey's.' "

Two former Dapper Goose employees tag team the bar and kitchen: Alex Wenzel heads a straightforward, approachable bar program – from $8 Manhattans, Old-Fashioneds and negronis to simple throwbacks such as Utica Club, Bud heavies, Miller High Life and Kessler whiskey – but you'll also find the owners frequently behind the bar, too. Many will recognize Joelle from Aroma on Bryant, where she still holds one shift a week.

A solid wine list, six beer taps – which included two local selections, Community Beer Works and Big Ditch – and a slew of bottles round out the drink options.

The chicken-and-waffles bucket ($15) is a massive helping with crispy, flavorful coating on the chicken, a pleasant sweet-and-spicy combo when paired with the freshly made waffles. You'll need a friend to help finish this.

Deep-fried housemade pickles (five for $9), a Blooming Onion ($10) and deep-fried Oreos (five for $8) complete the "Carnival Eats" section of the menu.

The pulled pork sandwich ($12, with hand-cut fries) stands out thanks to the pickles and roll, as well as a Carolina-style barbecue sauce that heightens the zesty flavor. Tater Tot poutine ($10) was fairly imaginative, with real cheese curds and gravy complementing girthy Tater Tots.

Casey's popular fish fry ($15) – Fridays only – is carried over from the previous regime and is available battered, broiled or breaded with a litany of sides.

With cool food-and-drink businesses such as Dapper Goose, Rohall's Corner and Spar's European Sausage all within a few blocks of Casey's – between Grant Street and Wegmans – the Garofalos' new venture is a strong addition to the Black Rock landscape.

Nora Graham, 9, and his father Lemuel Graham talk after dinner. Graham brought his two children for dinner and so his son could play video games. (Sharon Cantillon/Buffalo News)

The arcade and back dining area of Casey's Black Rock. (Ben Tsujimoto/Buffalo News)

Casey's Black Rock's food menu, left, and the scene inside the penalty box, where unruly customers may be sent. Please click for a larger image. (Ben Tsujimoto/Buffalo News)