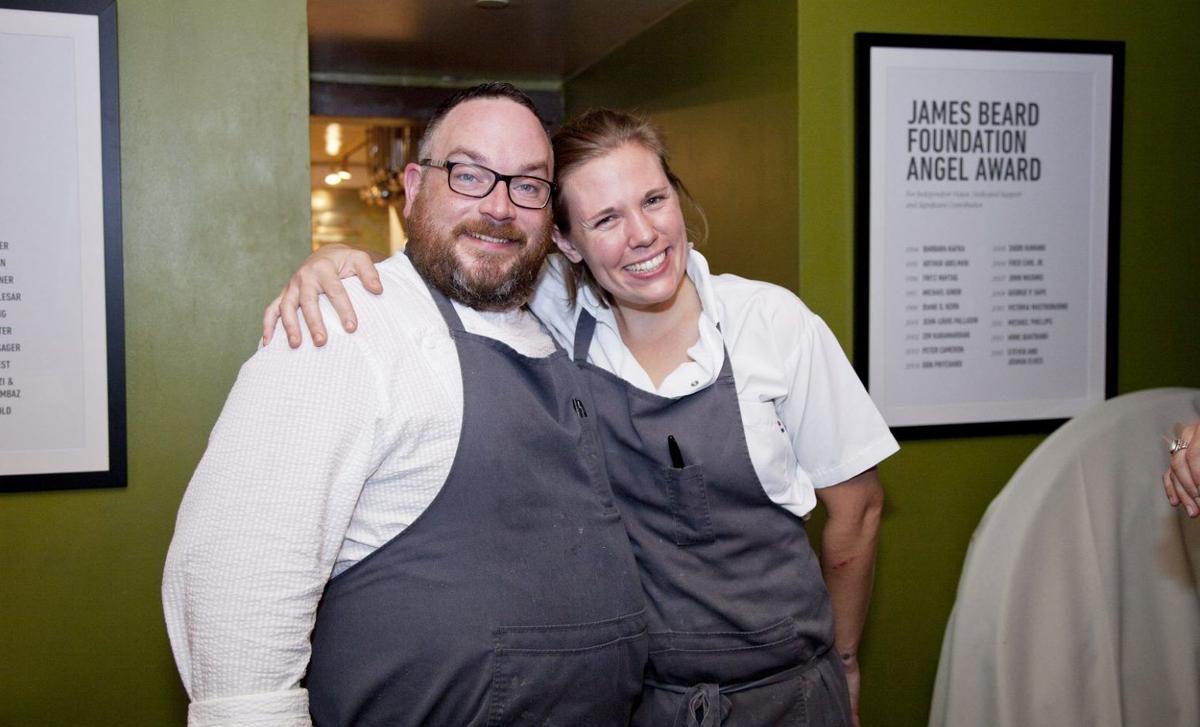 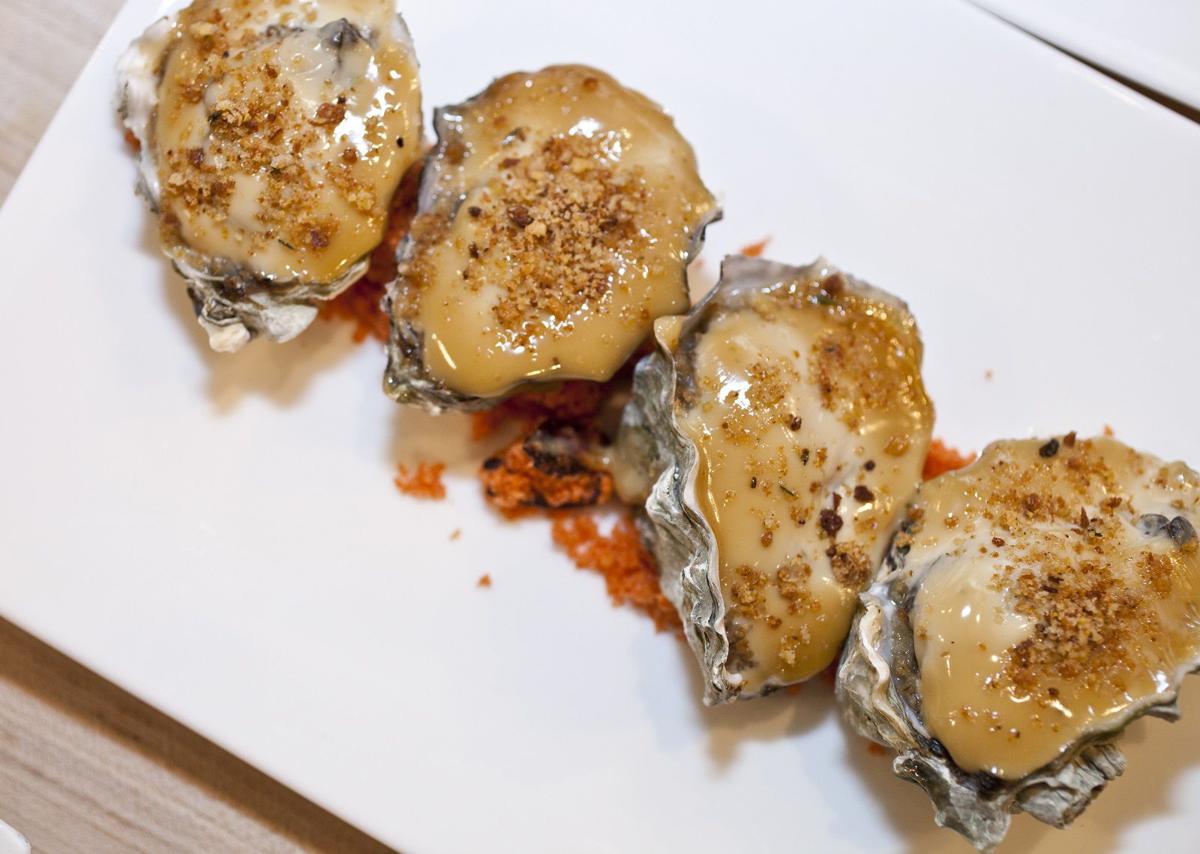 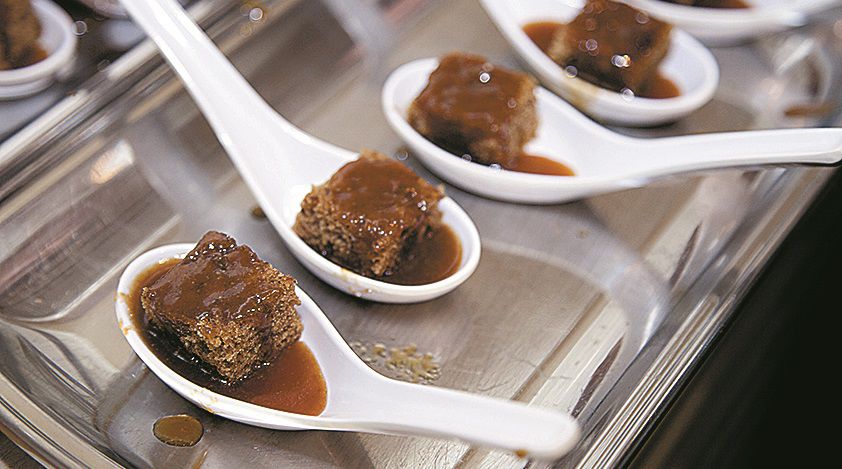 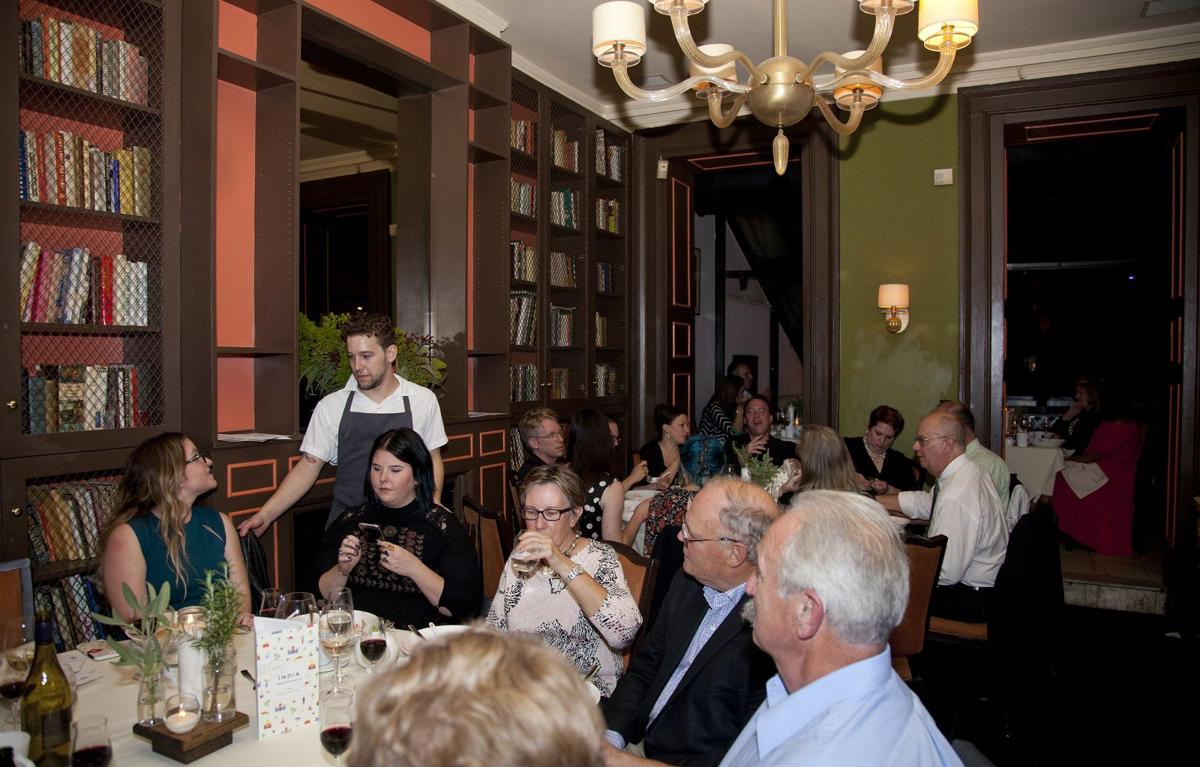 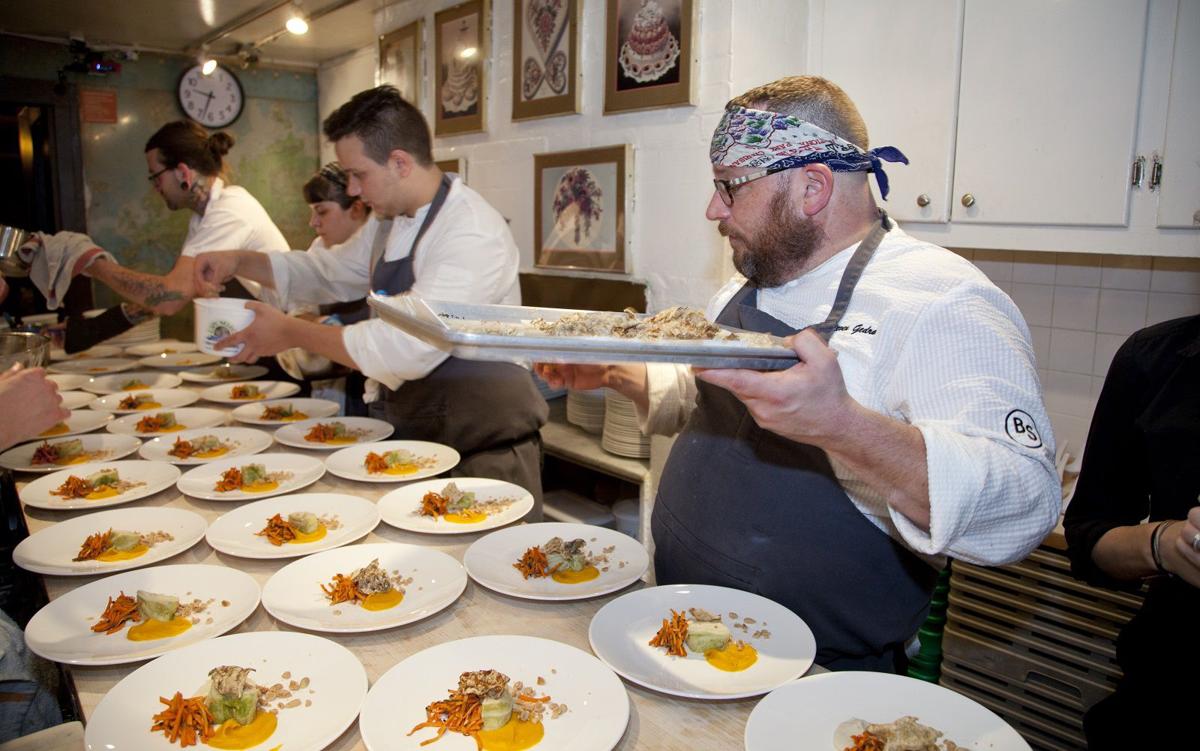 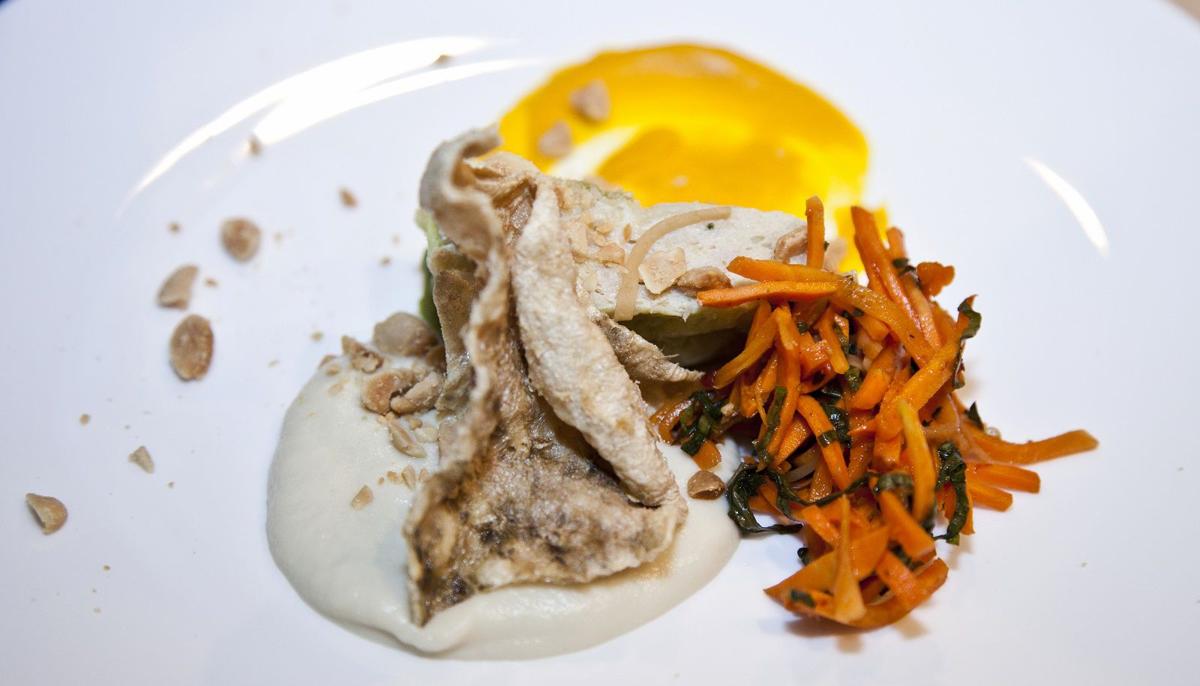 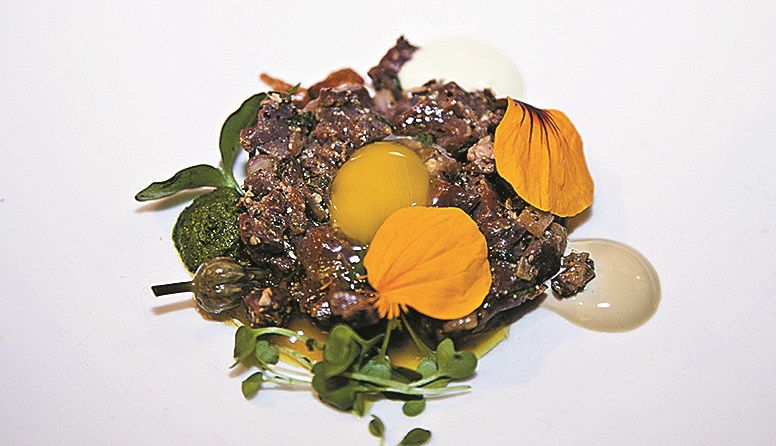 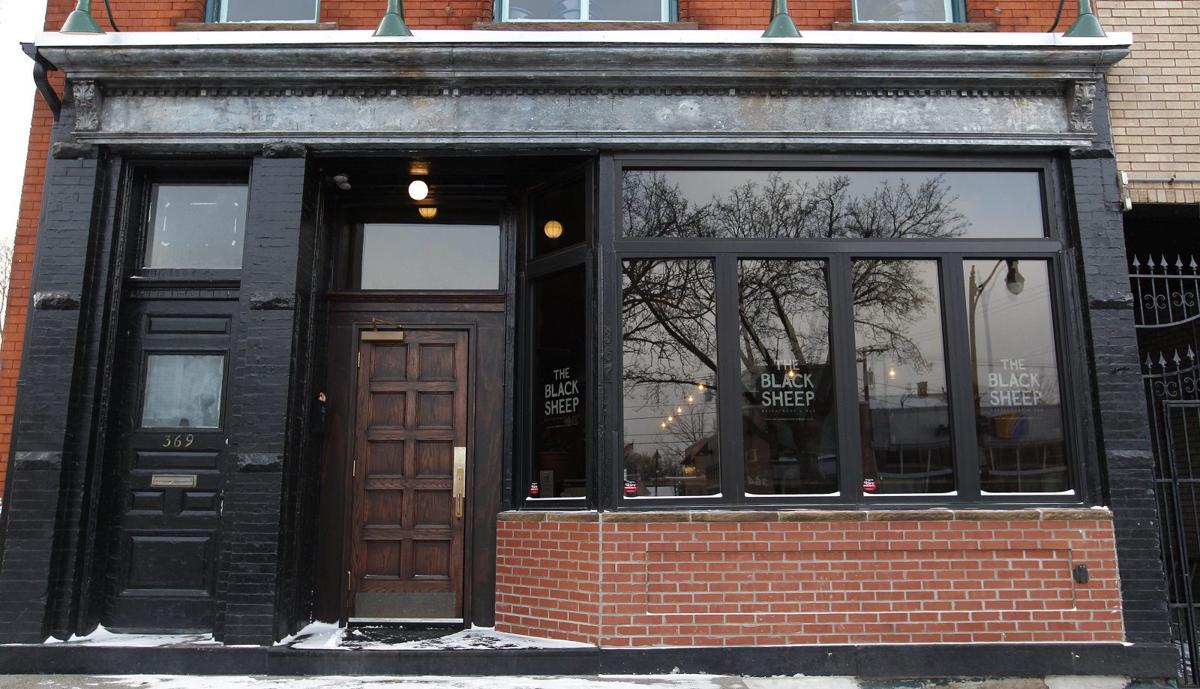 On Saturday, Gedra and his wife Ellen presented a six-course dinner with wine pairings at the James Beard House in Greenwich Village. It’s a nationally recognized culinary showcase for chefs who the foundation’s talent-spotters believe have something new to say about regional American cuisine.

Now the owners of The Black Sheep, 367 Connecticut St., the Gedras offered a meal of distinctive, creative dishes that served as a love letter to their city. With Steven shaping savory courses and Ellen on baking and sweets, the Gedras showed Manhattan why they have become a Buffalo favorite.

The rowhouse was home to James Beard, the famed chef and cookbook author, who championed indigenous American cooking as the equal of any cuisine on earth. It’s lined with Beard’s cookbook collection, and portraits of the bald gourmand beaming down on the proceedings.

The Gedras joined Adam Goetz of Craving and Edward Forster and Jon Karel of Buffalo Proper as chefs invited this year to show Manhattan how far the new generation of Buffalo restaurants have come.

“If it becomes a regular thing for Buffalo chefs to keep going to Beard, then I think we really took a step forward,” Gedra said last week. “If we’re nationally recognized as a food destination, and have good restaurants, we can stand up to people nationally.”

Dinner service was at 7 p.m., when a sell-out crowd of 75 brushed off drizzle and crowded into the first floor solarium room. The Black Sheep crew had been cooking since 8 a.m. (The $175 dinner was $135 for James Beard Society members taking advantage of their $29 annual membership.)

The Gedras greeted their guests with a warm bierock bun that was at once familiar and surprising. Tender beef was stuffed into a fresh yeasty crust speckled with coarse salt and caraway. It was a beef-on-weck sandwich, downsized for one-handed cocktail consumption without losing its primal satisfaction – another Black Sheep original.

There were also trays of oysters baked with a Marmite topping, characteristic of Gedra’s worldwide palette of flavors, and pierogi stuffed with potatoes, bacon and onion.

In the crush of diners, the pierogi never made it to where I was hemmed in at the solarium’s rear wall.

There I met Steven Gedra’s father, Drew, a Hungarian-American ironworker with a regal mustache. He said turning the former Golden Key Tavern into The Black Sheep was a family affair, with he and Ellen’s father, Bob Haag, a civil engineer, helping with construction.

Drew Gedra could have spoken for dozens of parents with similar stories. Buffalo restaurants are being energized by the enthusiasm and determination of a generation of cooks who left town, made their bones elsewhere, and came back to make their stand.

“Why does everybody come back?” Drew Gedra asked. Jill Gedra Forster, his oldest child, also returned, to open Nickel City Cheese and Mercantile, and now Lait Cru Brasserie, in the Horsefeathers building across Connecticut Street from her brother’s restaurant. (No one cheered louder later that evening when her little brother was introduced to diners.)

“They come back because family is here,” he said. “The lake is great, a tomato tastes like a tomato, and corn tastes like corn.” The restaurant is driven by “the heart and soul of those two people,” he said of his son and Ellen.

Steven Gedra grew up in Orchard Park, a member of the Orchard Park High School Class of 1995. Ellen Gedra grew up in Pittsford, which is sort of the Orchard Park of Rochester, she said. They met at a restaurant in Boston called Blu, where he was a sous chef and Ellen was seeking work. He got her hired despite the chef’s initial objection “because he thought I was cute and moved well in the kitchen,” Ellen said with a smile in her office last week.

They worked through restaurant gigs in Boston, Colorado, Nantucket and New Mexico, and were married on Oct. 11, 2009. They had already agreed to buy Buffalo’s Bistro Europa. “Went on honeymoon, came back, waited a day, then started working at Europa for free for three months” to learn the business, Ellen said.

The Gedras made fans on Elmwood Avenue, but needed more than 25 seats to grow, Ellen said. That led them to Connecticut Street, where they reshaped the building to meet their kitchen wishes.

Opened in August 2014, The Black Sheep has fed diners, but also the city’s restaurant community. Most months, it hosts Midnight Mass, a Saturday meal lasting into the wee hours that gives chefs a chance to serve what they love to cook, but can’t.

If they don’t have a kitchen at the moment, or the dishes don’t fit into their daily menu, Midnight Mass is the way they get those dishes seen. “That’s important to a cook, to be able to cook what they want,” Steven said.

On Saturday night, the tables were set with a forest of wineglasses. Plates held slices of Ellen’s sourdough bread and instead of butter, burro di chianti, whipped herbed pig fat. The former wing shaker started with a ruddy, translucent slice of prosciutto, aged 20 months, made from a Lockport-raised pig. It was accented with cantaloupe jam, confited strawberries and shaved Parmigiano-Reggiano.

Like other ambitious New School Buffalo chefs, who are using old methods to turn local bounty into new dishes, Gedra has learned charcuterie skills to help turn the whole animals he buys into value-added dishes besides sausages. No one else in Buffalo has the nerve to sell testicles.

Knowing that made pork heart tartare, minced raw heart with shallots and a quail egg yolk, tame by comparison. The mineral organ flavor and chewier texture made it more robust than the usual beef tartare. It started as an effort to use more of the pig, then became emblematic, Steven Gedra said before the dinner. “It’s a little bit crazy, definitely adventurous. It’s a microcosm of what we do.”

A triple-vegetable course took a Middle Eastern angle. Crunchy-crusted carrot and beet falafel fritters arrived on tzatziki, or sunflower tahini, resting on Ellen’s silver-dollar-sized pita bread. Between them was a single-bite sampler of a hit Black Sheep vegetable dish featuring kohlrabi, a bulb that tastes like broccoli with a radish edge. The meek vegetable was ennobled with yogurt sauce, spicy green harissa, and dukkah, a mixture of toasted nuts and spices.

Then came Hungarian-Burmese fusion. Cabbage cooked in pork fat till tender was joined in a shallow bowl by fermented tea leaves and fried fava beans, ingredients in tea leaf salad, the Burmese staple. A paper-thin slice of lardo, cured pork fat, was draped over the assemblage. Then beet consommé was poured over it at table.

Gedra said the dish was a nod to “new Buffalo,” partly inspired by the Burmese workers who have become a key part of the Buffalo restaurant workforce. Eating the tender cabbage enriched with pork, in earthy beet broth enlivened with tangy tea leaves and fried beans’ crunchy protein, I found a new comfort food. Then started irrationally wishing for a Buffalo winter, so I could come in out of the cold and eat it again.

For his last offering, on the biggest stage of his cooking life, Gedra presented a dish he could not sell in Buffalo the last time he tried. But he believed in it, he said. So Beard diners got striped bass mousse infused with Thai flavors of lemongrass and lime leaf, steamed in a cabbage leaf. It was served with squash and hearts of palm puree, peanuts and a shredded carrot salad, all crowned with a crispy bass-skin flag.

It was different. It was daring. It was delightful.

Ellen Gedra’s desserts started with a poached Seckel pear with beet mousse, chiplike beet tuiles and little stars made of beet meringue. It rested on dreamy crème anglaise flavored with Honey-Nut Cheerios, a shout-out to one of Buffalo’s most endearing olfactory attributes.

She closed with a single-bite taste of her sticky toffee pudding, rich date cake with warm, salty toffee sauce and a tocque of whipped cream and toffee crumbles. It’s a perennial contender for the best dessert in Buffalo. For mignardise, a take-home treat, there was taffy in chocolate-eggplant and saffron.

It’s always a challenge for cooks to travel and perform in the small first-floor kitchen, Izabela Wojcik, James Beard House director of programming, told diners after dinner. “We see over 200 dinners a year here. The menus always read beautifully on paper, but the execution is the thing,” Wojcik said. “The proof’s in the sticky toffee pudding.”

The crowd, filled with Gedra friends and family, cheered, but I wondered how the dinner struck people who did not walk in already a Gedra fan.

Heather Tortola and husband Carl, a self-described foodie couple from Boston celebrating their anniversary, decided to attend the Black Sheep dinner as a treat, even though they’d never heard of the place.

“It was fabulous,” Heather Tortola said afterward. “We really loved it.” Carl Tortola was struck by the pork heart tartare. “You wouldn’t ever think of having something like that,” he said.

The bass mousse with Thai flavors, paired with sparkling sake, she said, was the most delicious pairing of all.

But that thumb-sized pudding at the end was just a tease. It left them wanting more.

“We will travel for food,” she said. “Now we have to come to Buffalo.”

To join the James Beard Foundation, which celebrates regional American cuisine through efforts including showcasing chefs at the James Beard House, go to jamesbeard.org/join-us.

At This Little Pig, a band with chops rocks out

Lots of restaurants make a living knocking out the oldies like reliable cover bands. To really rock, though, it helps to have a collection of …

New York State’s approval of outdoor dining, in phase two of Covid-19 pandemic reopening, took almost the entire food industry by surprise. Some business owners sprang into action, pulling patio tables out of storage and disinfecting outdoor dining spaces. More than 50 were prepared to reopen in less than 24 hours, conveying the urgency of returning to business beyond