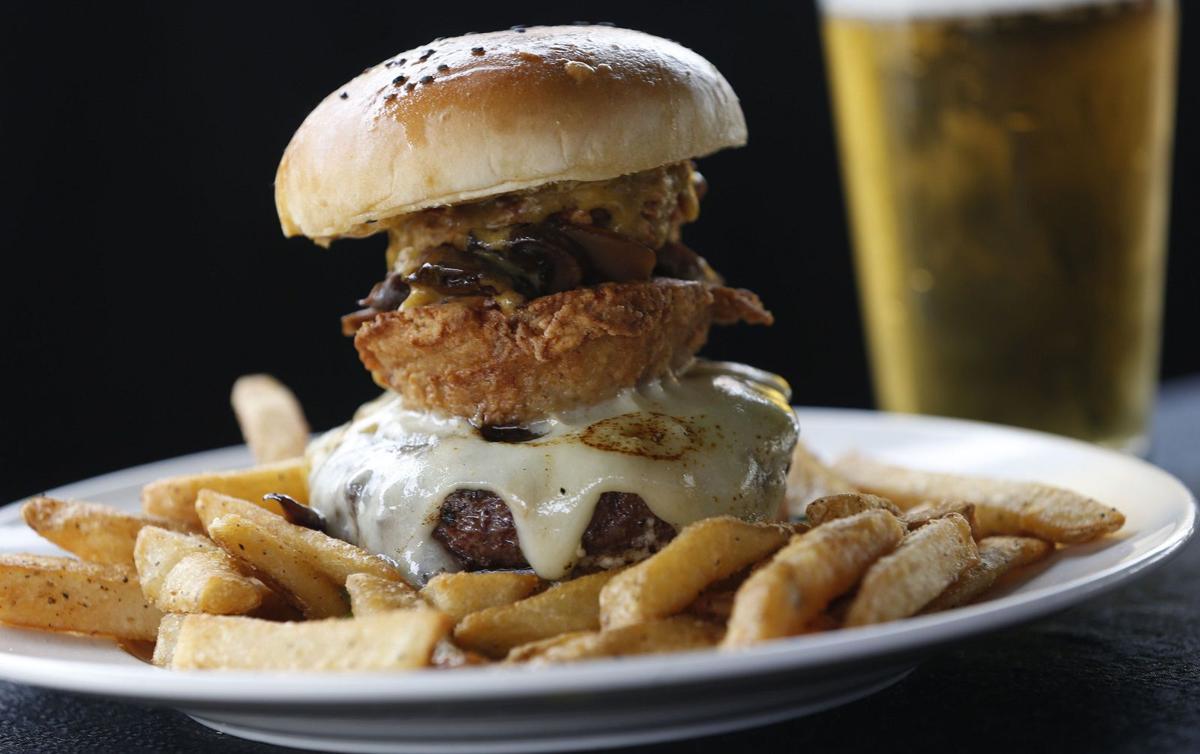 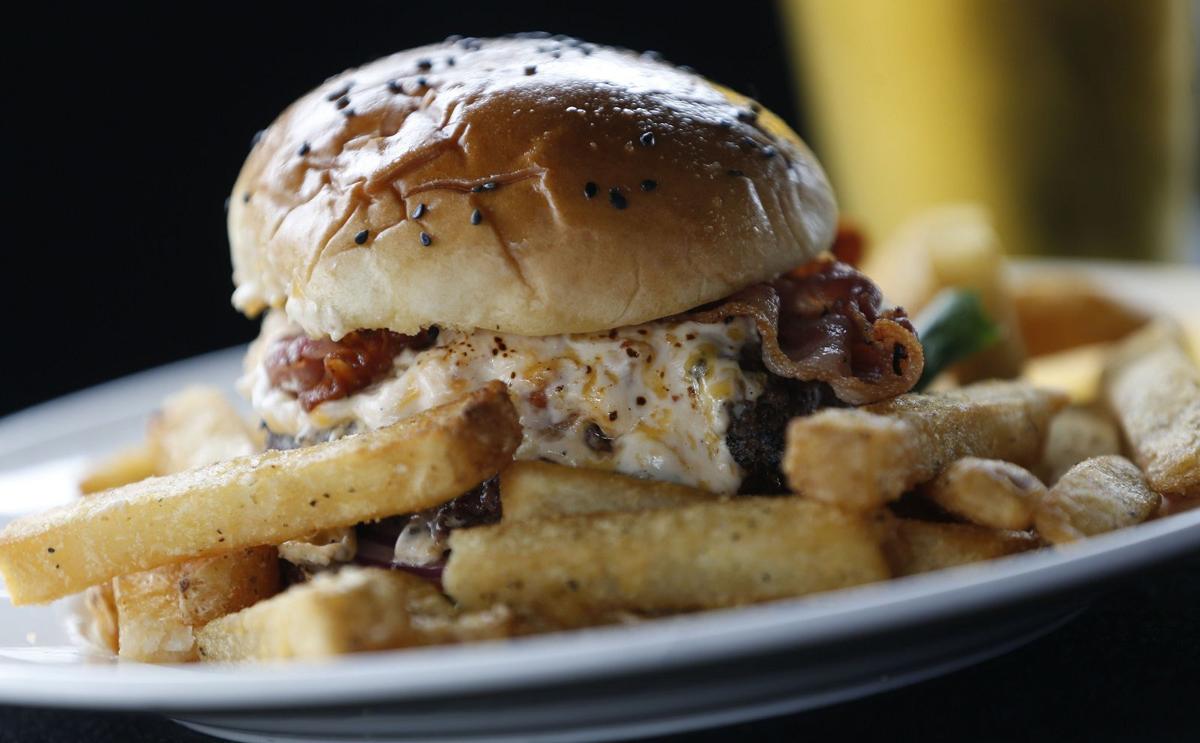 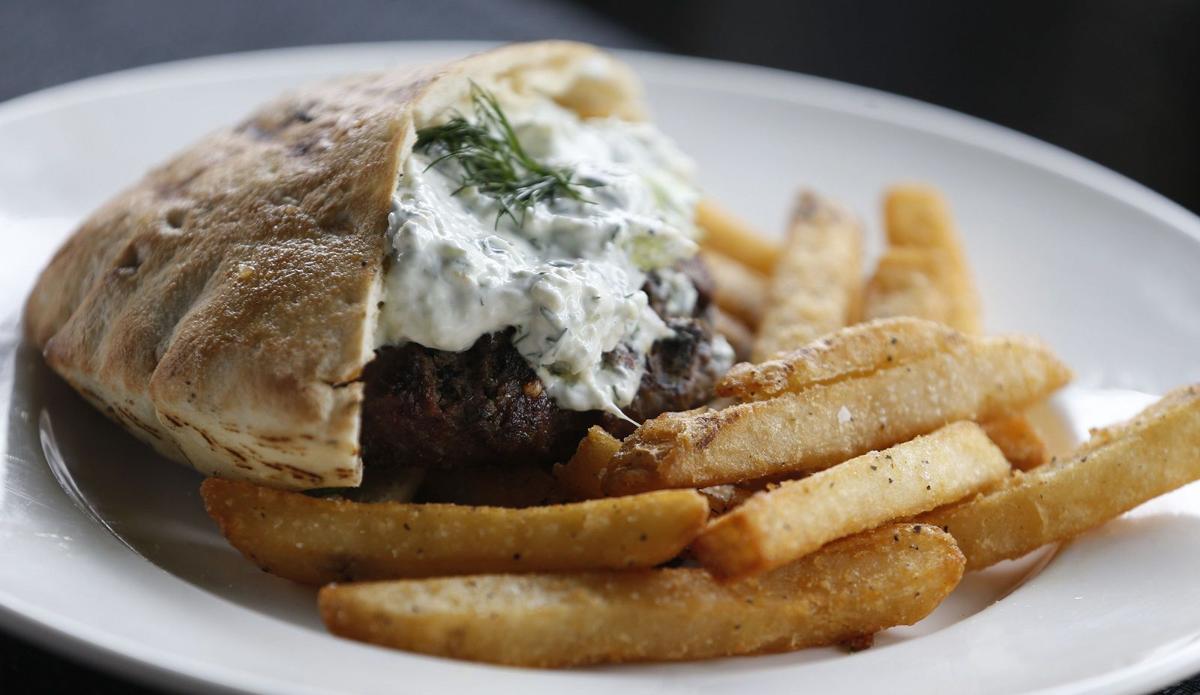 The lamb burger is made with grass-fed lamb, topped with house tzatziki, aquaponic romaine and served in an onion pita. (Sharon Cantillon/Buffalo News) 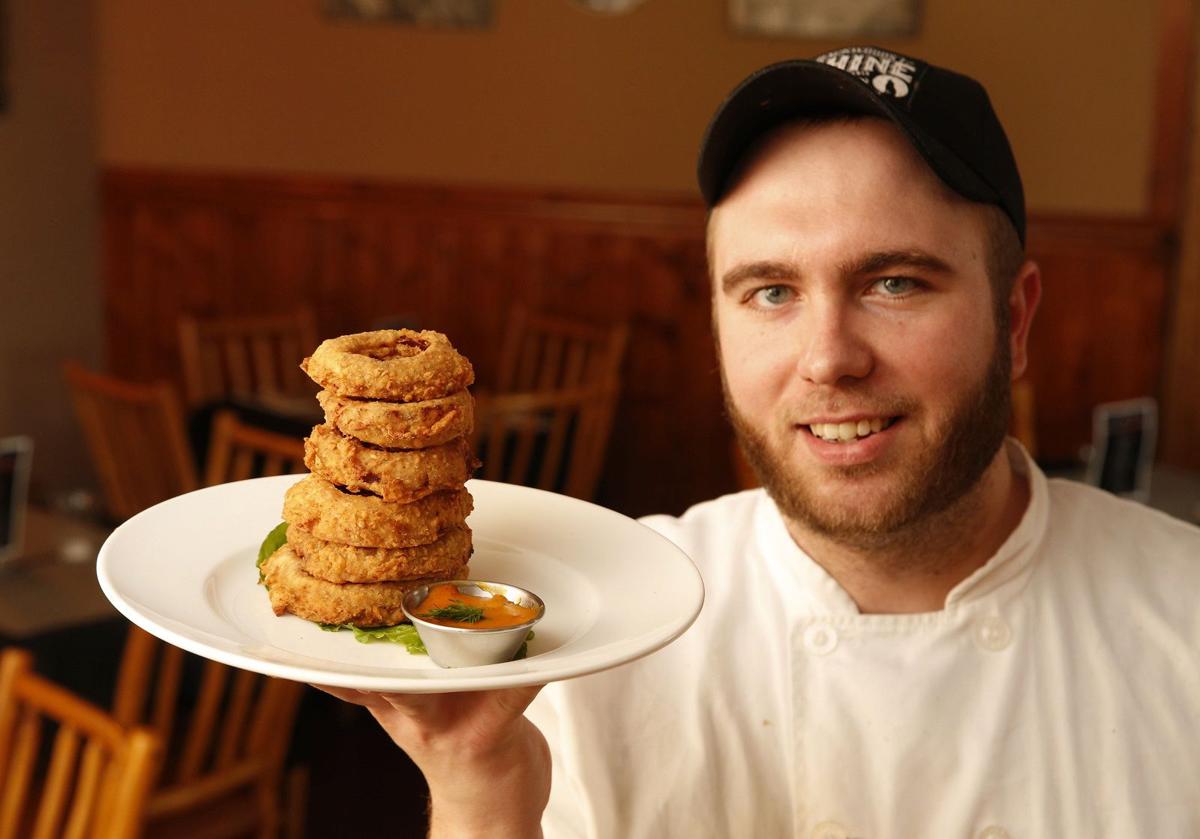 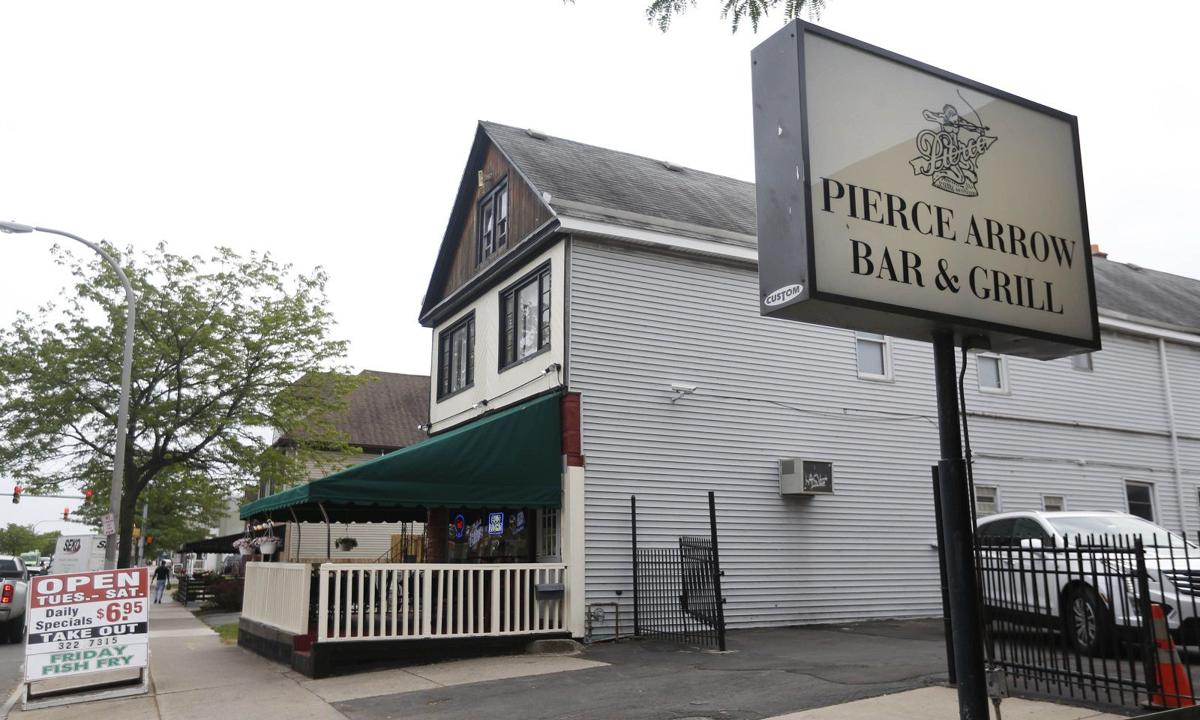 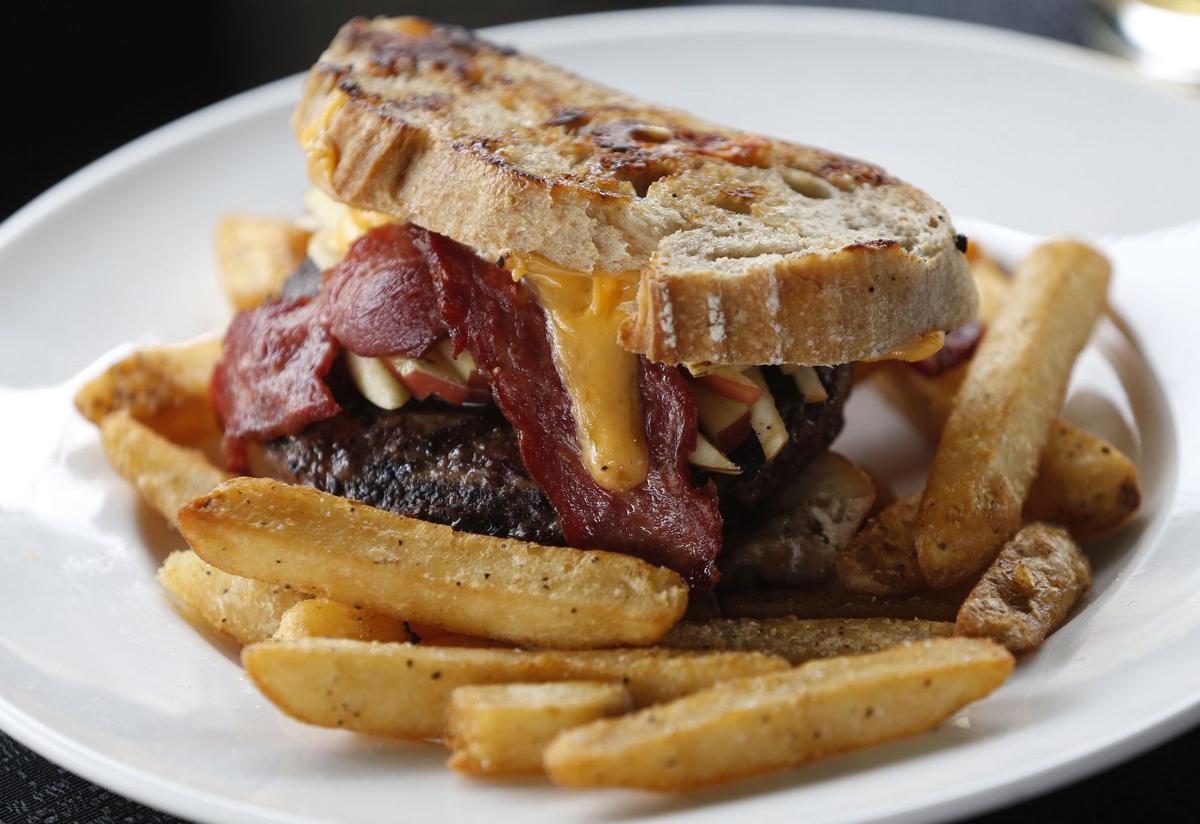 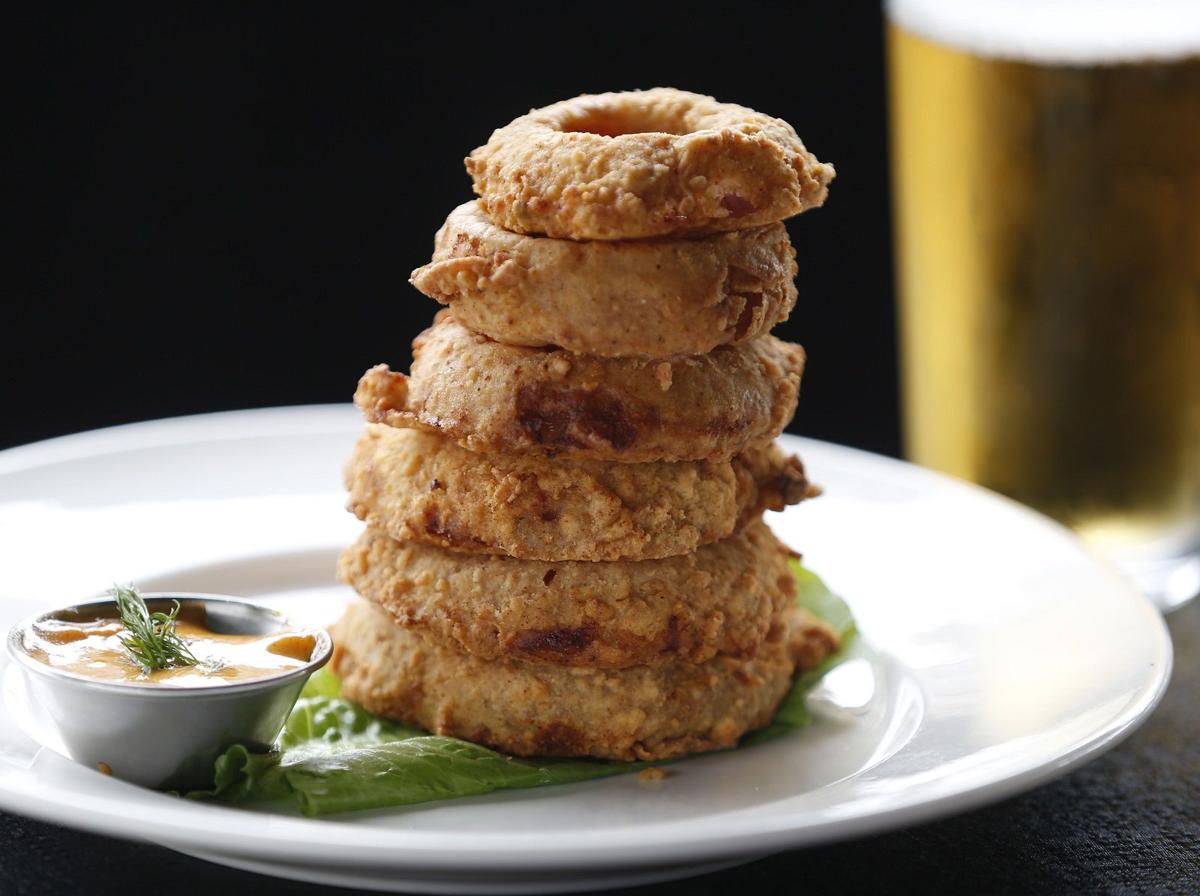 The hamburger is the most common dish in America, offered in more restaurants, fancy and not, than anything else we eat. It's also a meal simple enough that many Americans can make decent versions themselves. So if a restaurateur proposes to make hamburgers the core of a restaurant menu, those burgers had best be outstanding.

It offers a dozen types of burgers, running the gamut from straight-up cheeseburgers to daring concoctions like a burger piled with macaroni and cheese between two funnel-cake buns. I tried most of them, and ended up believing that there's more to a satisfying burger restaurant than a properly cooked beef patty.

For instance, I would prefer the sense that a place is trying to make it easy for customers. The sign out front says Pierce Arrow Bar & Grill, with nary a burger mentioned. Then the parking lot was so tiny I had to back out onto Elmwood Avenue. Our server told us we could have parked across the street, but that wasn't indicated anywhere I could see, or on its delivery-oriented website.

Neither infelicity was the kitchen's fault, but they did contribute to a sense of relief in finally sitting in the breezy patio with a beer, looking at a menu that assured me this was in fact the burger joint I sought.

Fried starters include house-battered chicken tenders ($8), onion rings ($7) and bacon Parmesan fries ($7). The tenders and onion rings came out in rumpled coats of dark brown batter – crunchy enough to hear tablemates chowing down. It worked for the onion rings, but the tenders ended up on the chewy side.

The dressed fries were tossed in what was described as roasted garlic bacon oil, and served with maple bacon aioli. The fry basket arrived, topped with shredded Parmesan and bacon bits, which usually foreshadows delight. But the large-caliber fries were mealy and wan in flavor despite the garlic-bacon pedigree. Oil gathered in the bottom of the basket.

We pushed the fries aside and waited for the main event: burgers.

The Average Bob ($10) was the baseline burger. Eight ounces of hormone-free, grass-fed brisket, the menu said, topped with American cheese and bacon, then lettuce, tomato and sliced red onion.

This was an excellent burger, for the most part. The meat was crusted on the outside and pink within, as ordered, with substantial carnivore-satisfying steak overtones. The bacon was thin, but there.

The only thing I didn’t like about it was that its top bun had been dipped on oil, apparently to get some black sesame seeds to adhere to the bread. This undermined one of the primary roll roles: the chance to eat a hunk of juicy meat without having to wash your hands afterward.

Then there were the fries: more of the same mealy large-caliber fries, coated but not well-flavored. The same fries came with all the burgers, and were left behind en masse.

As we worked our way through the other burgers, a pattern developed. The patties were tasty, cooked properly. The buns were oil-slicked, the fries regrettable.

I would ask for a dry bun next time and go for another Beer, Bacon & Cheese ($10), the patty topped with a beer cheese dip, a burger that felt like a successful end-of-picnic experiment.

Or the Duck, Duck Chicken ($12.50), whose patty of dark-meat chicken and duck had plenty of flavor to stand up to the chargrilled crust. The advertised orange-miso sauce was not noticeable, however. The Manny Cruz ($11) offered a patty of mildly spiced chorizo sausage appealingly combined with beef, topped with thin crispy fries that had been house-cut, superior to those offered everywhere else in my meal.

The Fair Game ($12) spoke to my willingness to wallow in excess, as it nested the beef between two funnel cakes and a nest of macaroni and cheese. But the funnel cakes were soft and chewy, the mac and cheese bland, and I removed the burger and retreated.

A burger named What'Swiss All the Mushrooms ($11) was another saucy favorite. You can guess what came on the well-cooked brisket disc.

My favorite of the night didn't come on a bun. A lamb burger ($13), juicy and well-seasoned, was tucked into a pita pocket. It was slathered with garlicky tzatziki, the tang of yogurt and freshness of dill balancing out the lamb's musky fat, for a zesty burger experience.

The vegetarian option, all too often a shrugged-off effort, was a tasty black bean burger ($10), livened up with spicy mayonnaise. The patty crusted up well, ending up medium-light in texture, more like a lean beef burger than the sullen, sodden wads foisted on plant-eaters elsewhere.

When it was time to go we abandoned the fries but took the rest of the patties. They were not, after all, the source of my beef.

Plant-based restaurant Root & Bloom always had millennials in mind. From an elegant, hidden gazebo to a lounge-like, wood-adorned interior, James Ernst and Sarah Sendlbeck’s restaurant seemed built for Instagram. As Buffalo reopens from the Covid-19 pandemic, Root & Bloom’s loyal customers – primarily in this millennial category – have different expectations for dining, and Ernst and Sendlbeck have

The lamb burger is made with grass-fed lamb, topped with house tzatziki, aquaponic romaine and served in an onion pita. (Sharon Cantillon/Buffalo News)