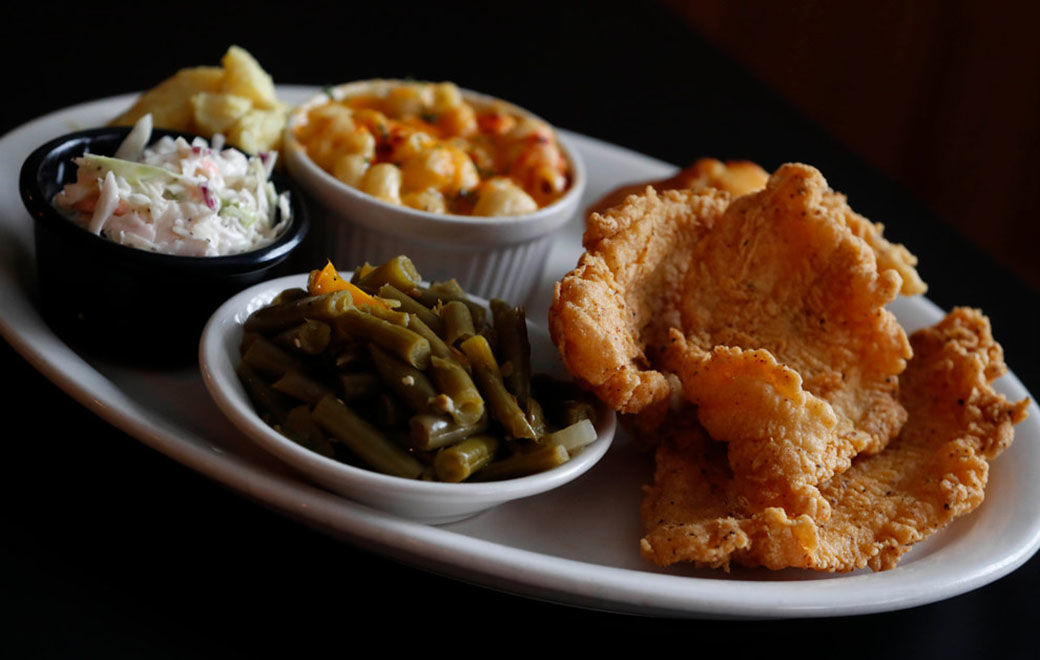 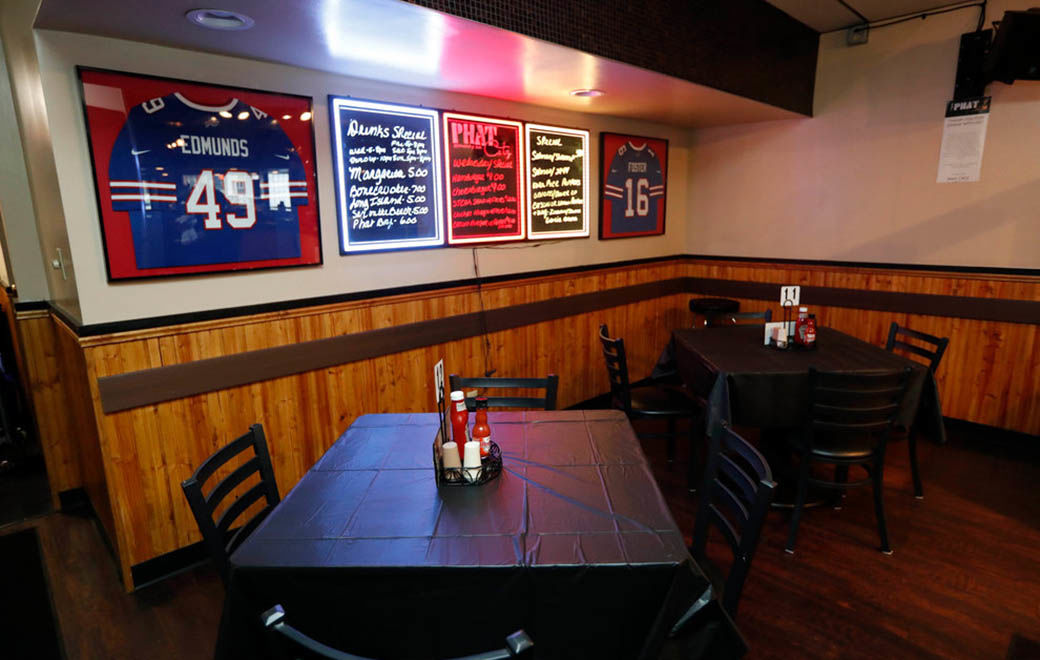 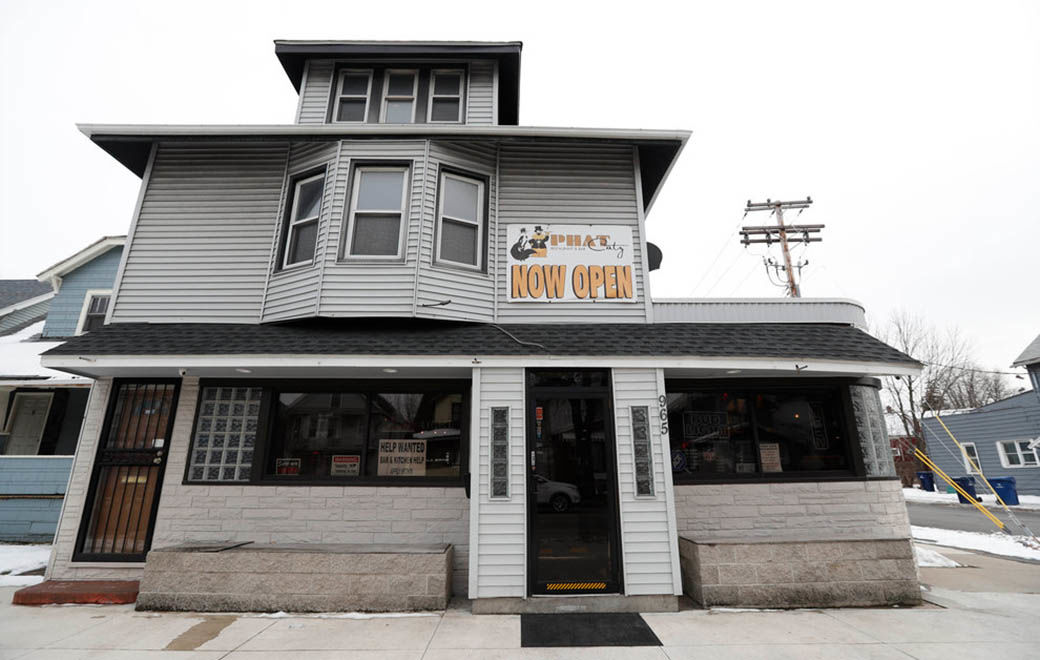 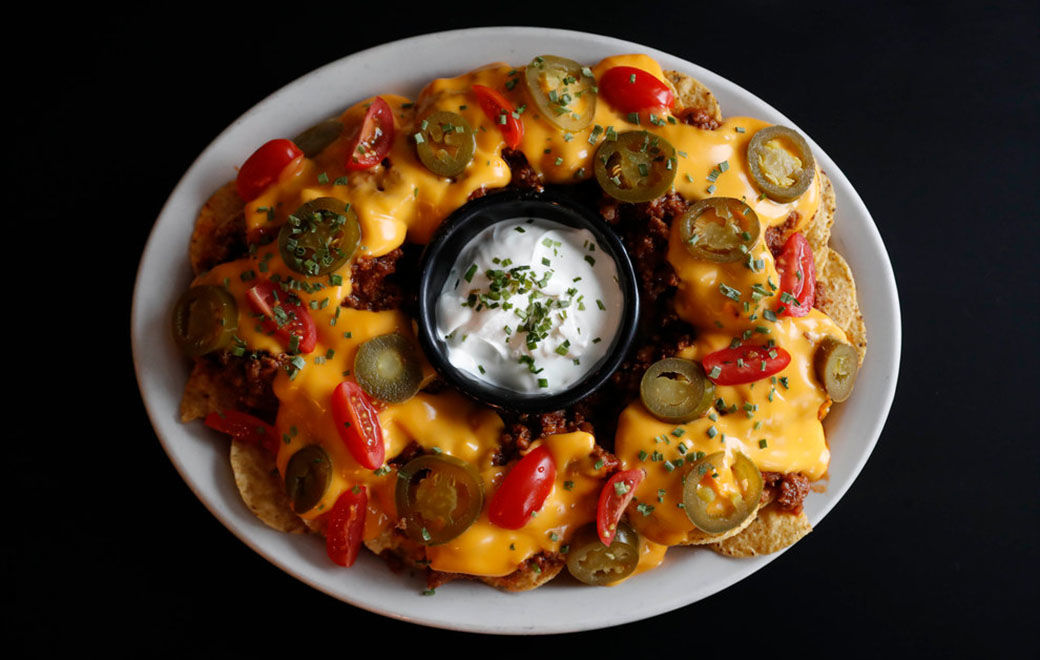 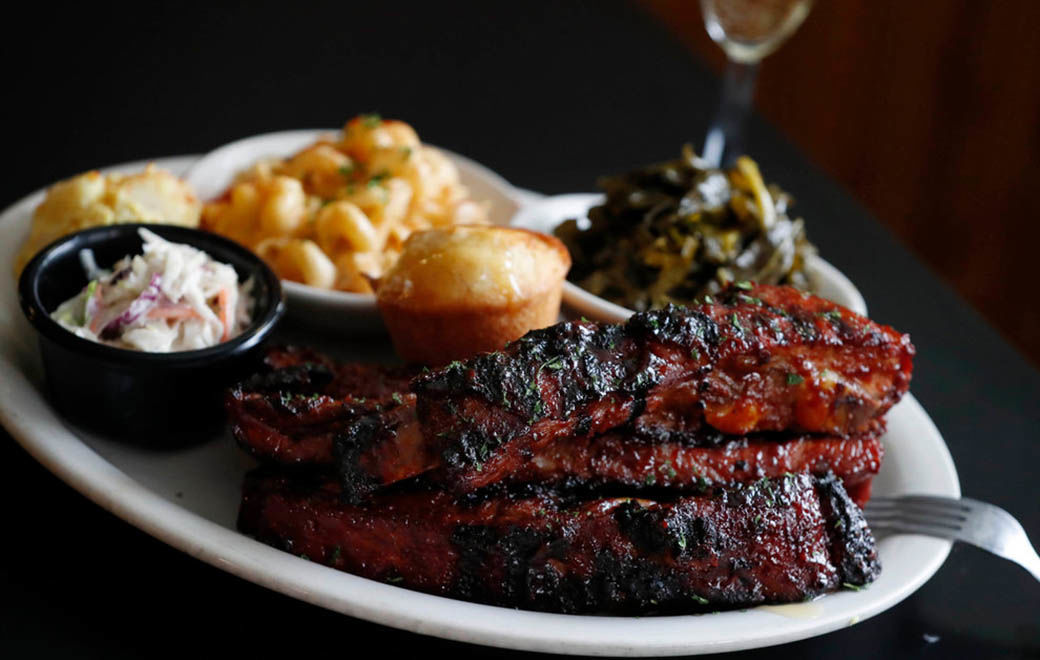 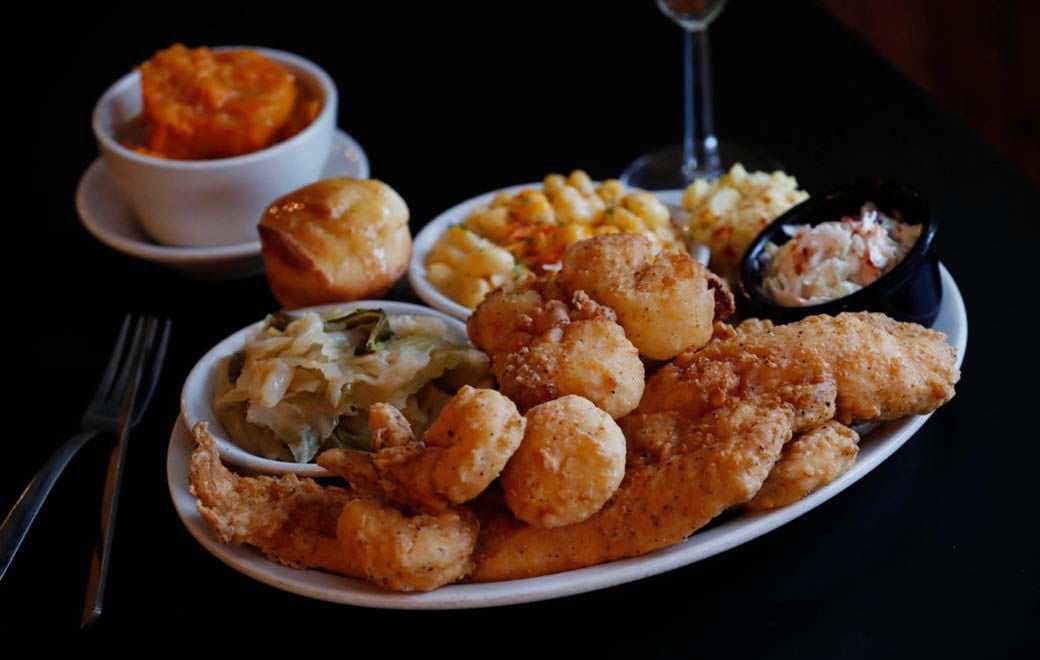 I can enjoy a restaurant’s attentions even when it’s really looking over my shoulder at someone else. The evening I showed up PhatCatz, a soul food restaurant on Kensington Avenue, was Ladies’ Night.

Not hunting for romance, I was outside the target demographic. The evening’s program led to my second estrangement, as a disc jockey fed a succession of dance hits into a robust sound system. After being led to a table where I could not hear what the server was saying, I asked if there was anything quieter, since I have a hearing problem.

She went seat-scouting, then led me to a table under a different speaker. I thanked her, shrugged silently, and considered pulling the rip cord.

But by then, I had gotten an eyeful of platters crossing my path. Heaps of golden chicken and handlebar-sized spare ribs caught my attention, then craggy fried catfish set the hook.

After our server seated us, she was observant and responsive. PhatCatz’s setup is a bit nicer than your entry-level neighborhood drinking establishment. The walls carry mirrors, framed jerseys, and enough flat-screen televisions to be seen from practically every seat in the place.

A semi-circular bar centers the main barroom, with another room in the back. There are placemats and tablecloths, even if they’re picnic-grade plastic, and the furniture is sturdy.

The same could be said of the appetizers, from garlic cheesy bread ($5.95) to loaded nachos ($12.95), tortilla chips piled high with seasoned ground beef, cheddar cheese, onions and tomatoes, plus salsa and sour cream.

Breaded fried okra ($7.95) brought a basket brimming with crumb-coated gumball-sized bites with slippery centers. They were plentiful, but more chewy than crunchy-tender, as my favorite hand-breaded versions have been.

Ordering barbecued shrimp ($12.95) got me chonky crustaceans out to be fried in a crumb coat, sauceless. My chosen lemon-pepper seasoning was applied generously, unrestrained saltiness swamping the black pepper and citrus bite. I tapped off most of the excess and kept eating. You would have to do worse to keep me away from such splendid shrimp.

Leading the handheld section are a Midway Philly steak sandwich and its chicken hoagie counterpart ($13.95), with peppers, onions, cheese and PhatCatz sauce (a sort of jacked-up mayonnaise). Catfish, perch ($13.95) and haddock ($12.95) also can be presented in sandwich form, accompanied with fries.

Vegetarian options are modest, with chef salad ($4.95) and two of the sides, cooked without meat. Owner Kim Collins-Jones, nearing her third anniversary in business, said more vegetarian and vegan offerings are on the way, as well as brunch.

If PhatCatz wants to start knocking out chicken and waffles, it’s already halfway there. The fried chicken slaps, as the kids say these days. Crunchy at the corners, skin worth eating as a first course, ungreasy dark meat the second, down to clean bone.

Three pieces came with a rib-chicken combo ($22.95). It took two plates to hold it all. Three pieces of fried chicken, and two spare ribs practically big as plantains. Those ribs were roasted and fire-finished to toothsome caramel crisp on the extremities, not smoked but flavored with char and sticky barbecue sauce.

Collard greens were substantial and slightly spicy. A square of cornbread, on the cake side, with more corn color than flavor. Coleslaw was spiked with celery seed, beside a scoop of mustardy potato salad, all solid. Macaroni and cheese, too, whose strings showed it was made with real cheese, not just squeezed out of a bag.

PhatCatz soup ($4.25) was mostly noodles, no broth to speak of, regrettably.

A fried catfish entrée ($16.95), ordered by a guest, had two fillets fried near to perfection, tender flakiness inside a coating as snacky-addictive as potato chips. Stewed cabbage was limp and sweet as apples. (Next time I’ll have to dip into the yams.)

The fried choices were fine, but a sautéed dish scored, too. Seafood supreme ($24.99) comprised a hefty haddock fillet and eight of those monster shrimp, arriving in a welter of heat-softened onions and sweet bell peppers. Savory broth, orange with chile, had soaked down through a bed of white rice.

It broke no new ground, just adeptly proved that the cook isn’t a one-trick pony with comforting, delicately handled seafood.

Peach cobbler ($6) was offered for dessert, but I couldn’t do it justice.

In the mid-evening hours I was there, more people were there for the food than angling for companionship, it seemed to me. Most of them ate, or picked up food, and left the throbbing music behind.

I followed, unfashionably early. I would go back for the fish and ribs, mac and cheese, and greens. If you’re not there to meet anyone, it’s not rude to eat with earplugs.