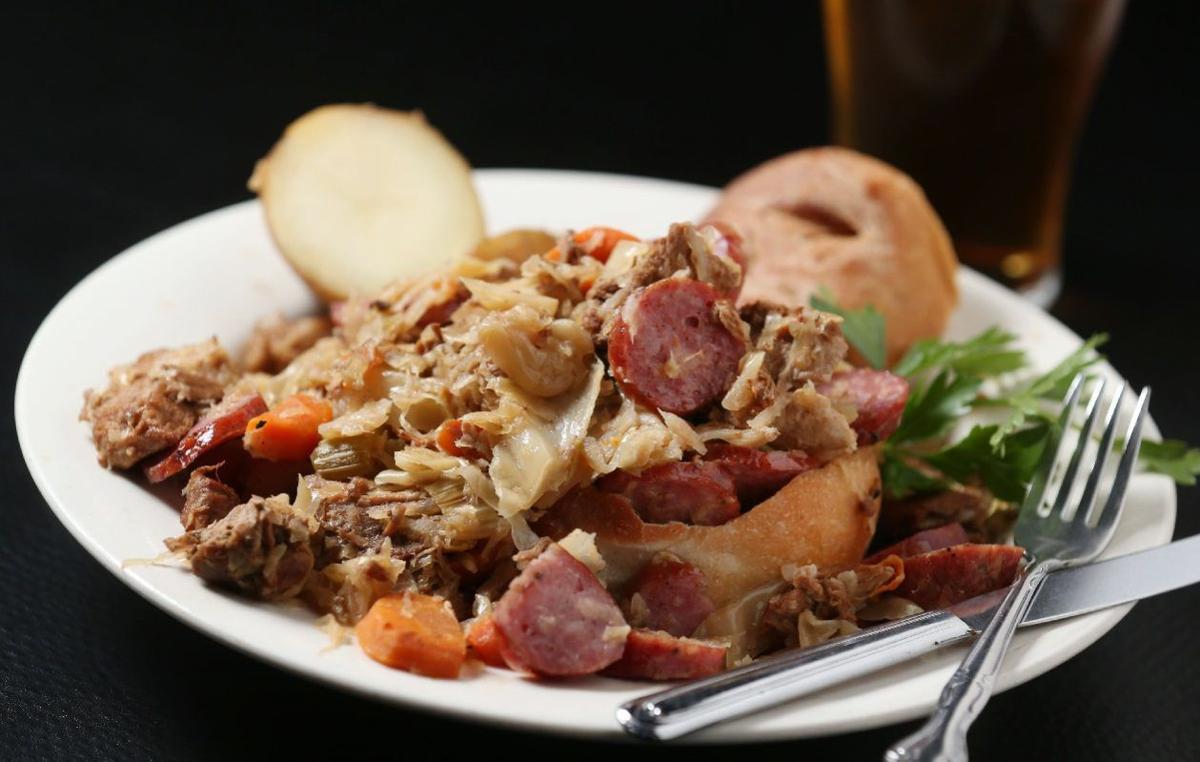 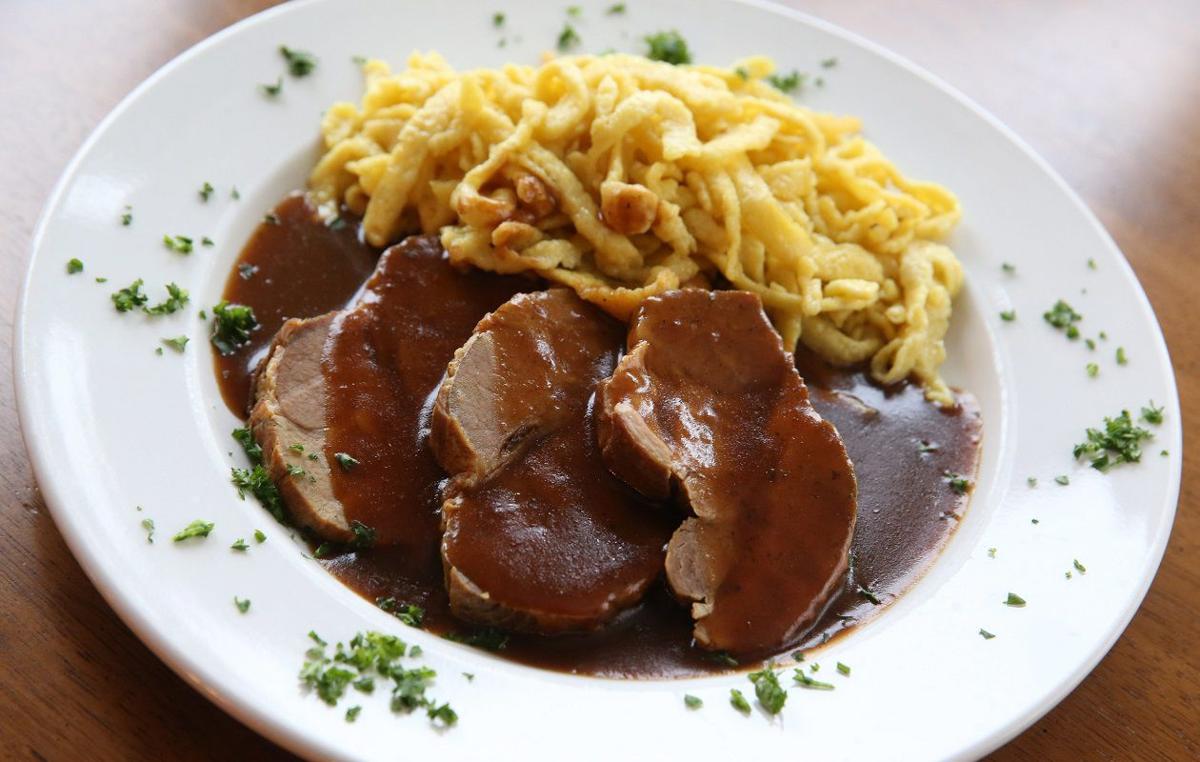 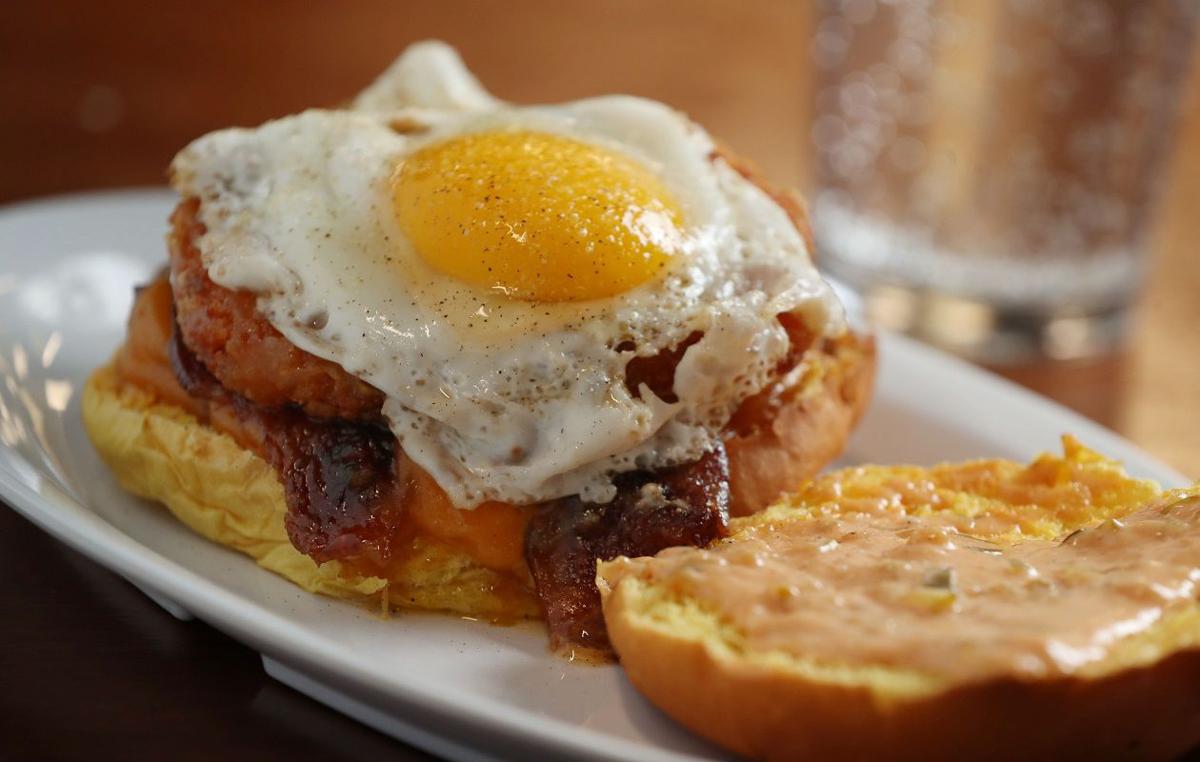 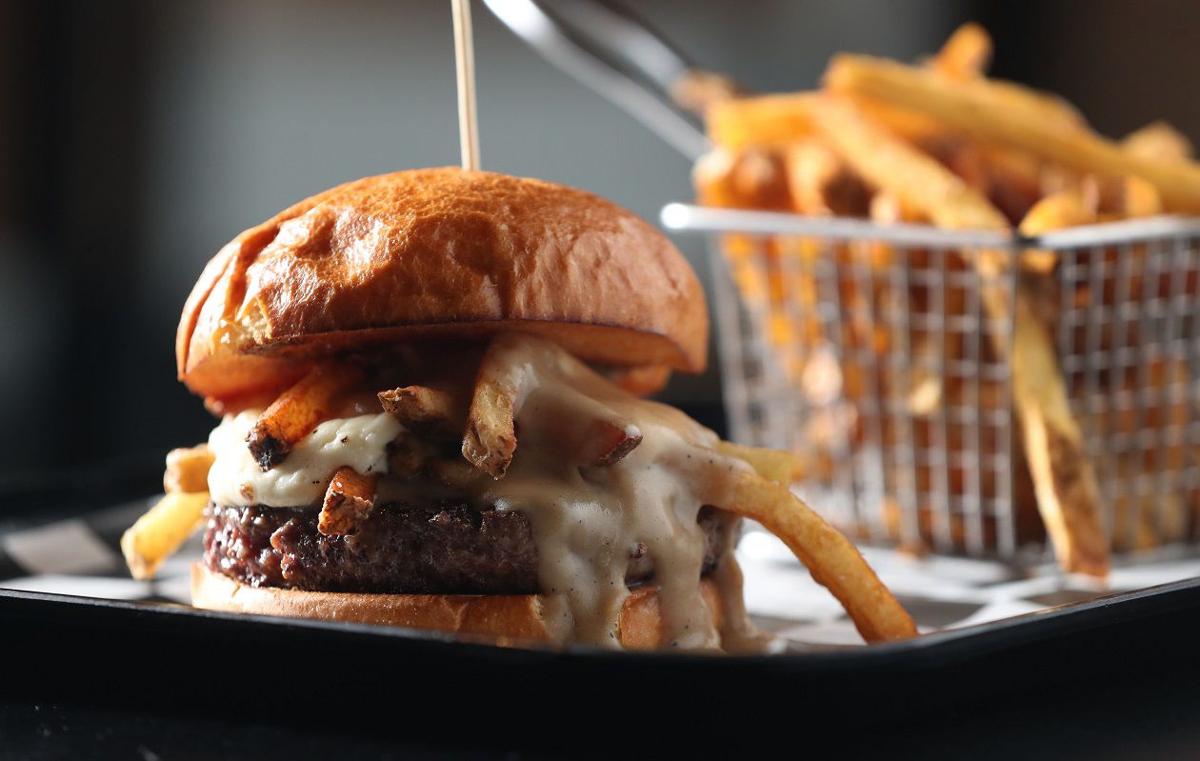 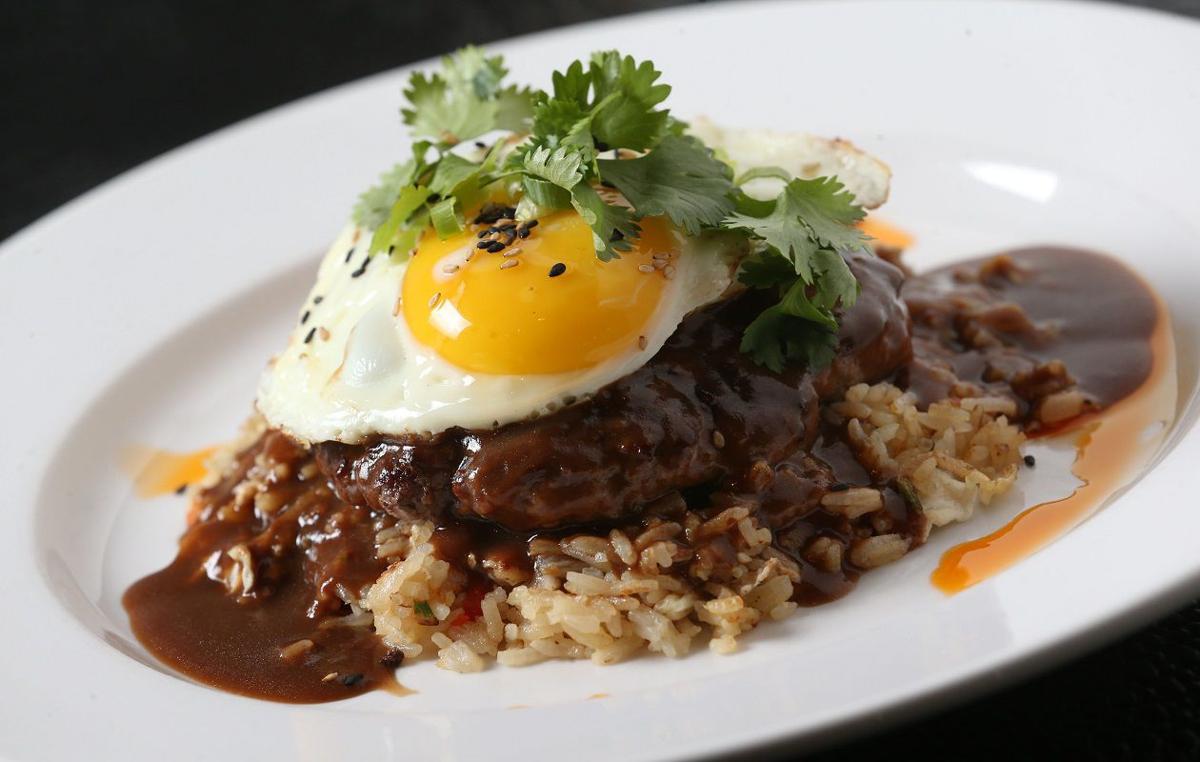 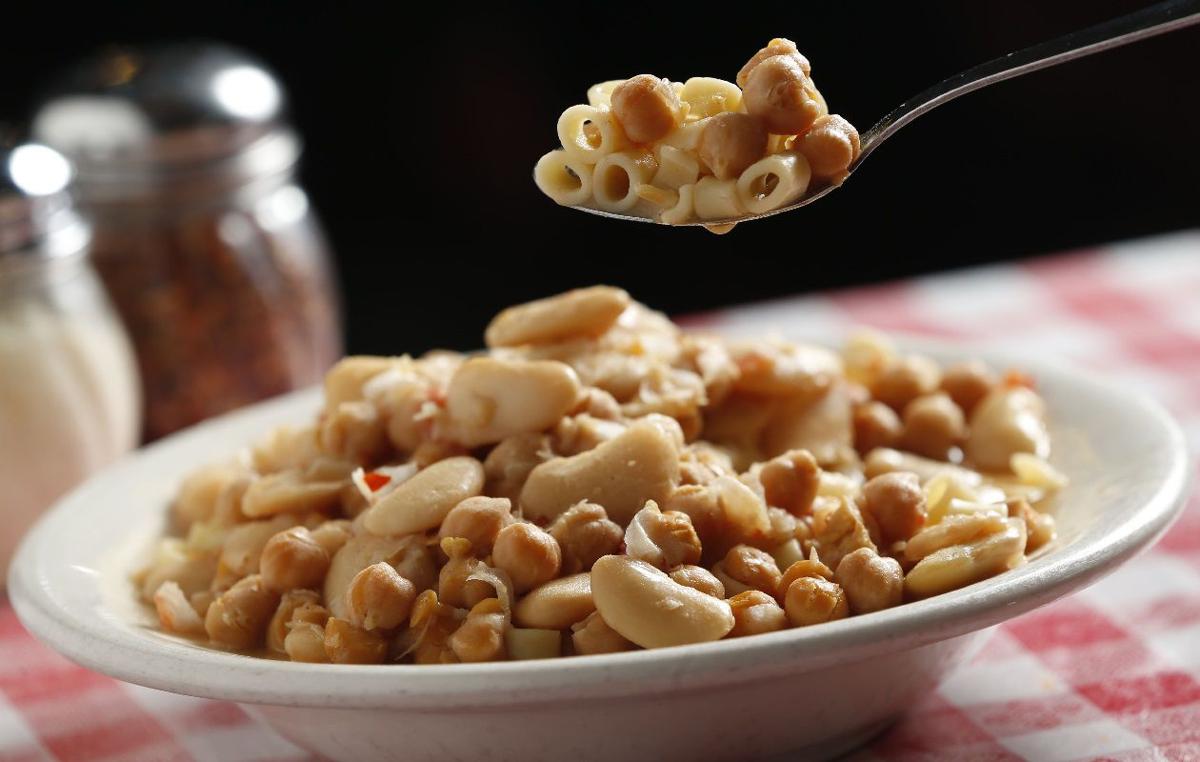 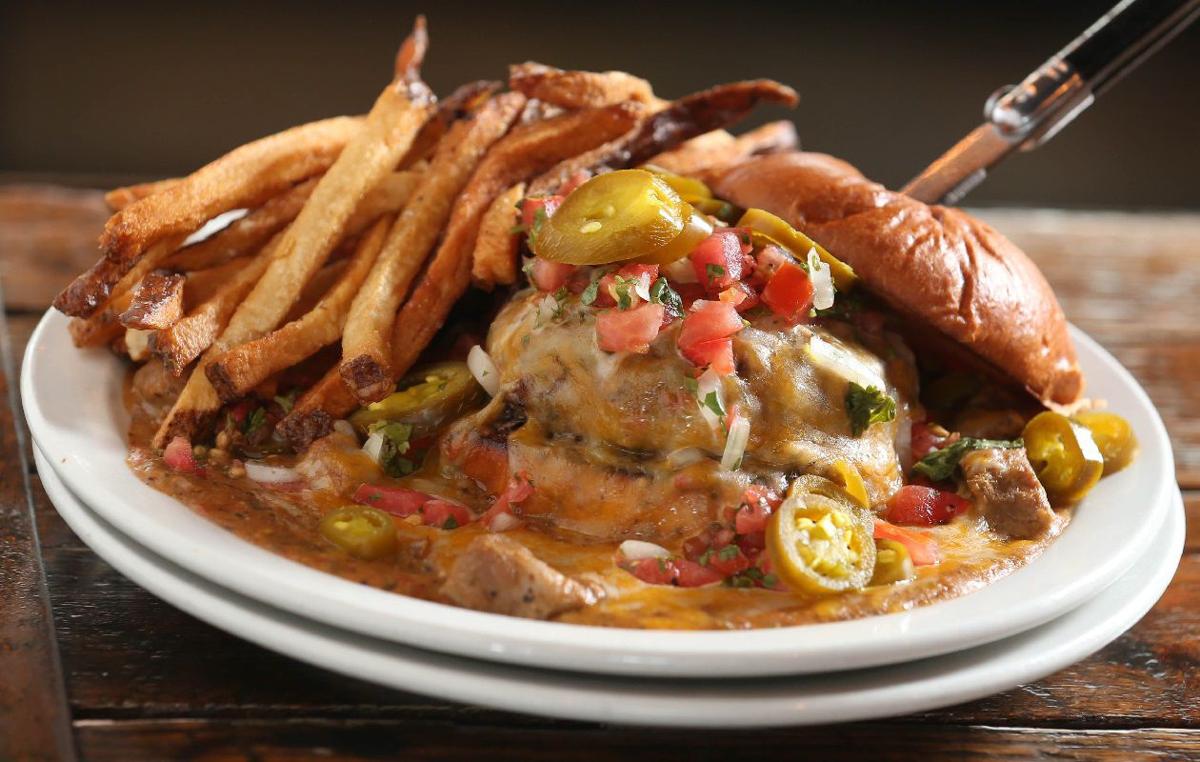 You'll need a fork and knife to eat some of the burgers at Allen Burger Venture, including the number "Seven" that os smothered in Colorado pork green chili and Monterey Jack cheese on a brioche roll. (Sharon Cantillon/News file photo) 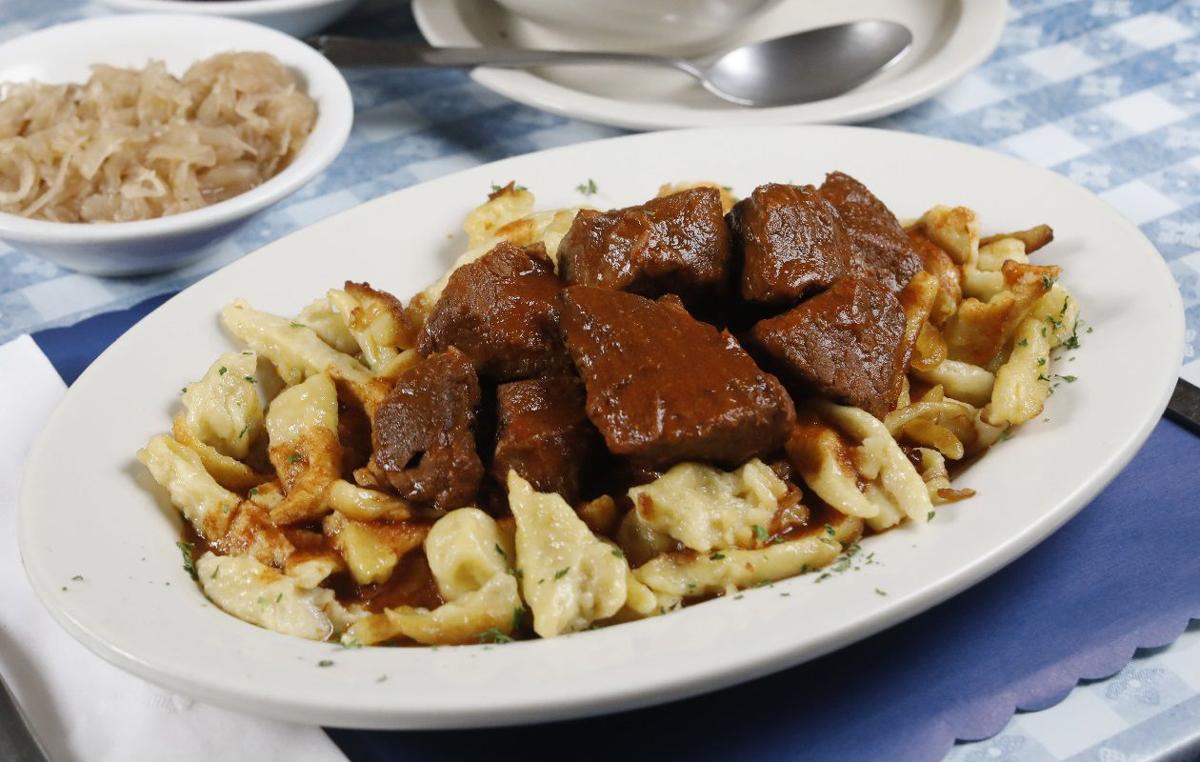 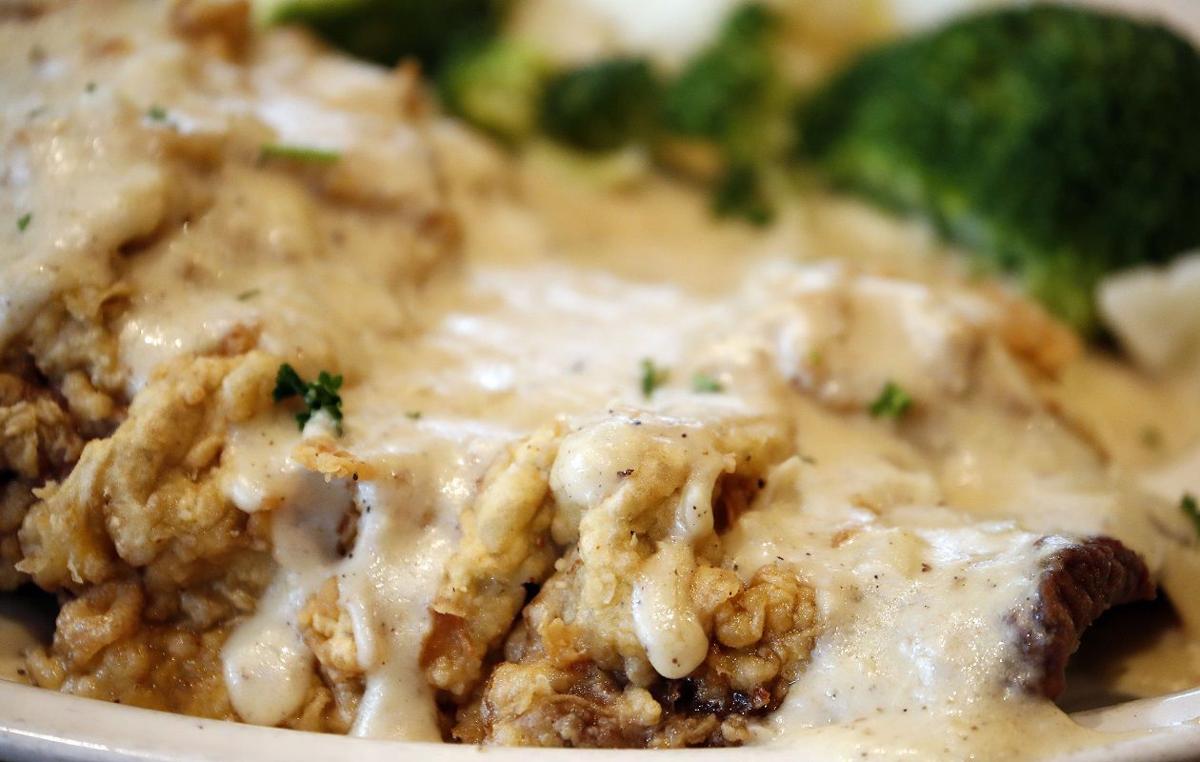 When explorers undertake travel to the North Pole on foot, they eat a fat-rich diet, because they’re burning as many calories as a small-blast furnace.

Snow shovelers on Buffalo streets face similar struggles, but no one’s going to make a National Geographic documentary about them. They have to find their rewards where they can, and I would suggest that the restaurants of Western New York are an excellent place to start.

As snowflakes exfoliate numb skin and howling winds suck the breath from your lungs, let the down-parka hug of these Buffalo-area restaurant dishes keep the home fires burning.

Inspiration for this collection came from the Terrace at Delaware Park, 199 Lincoln Parkway, in the Marcy Casino. There, chef Bruce Wieszala has started offering cassoulet, a French-inspired classic.

It’s a meat-and-bean casserole whose “ideal consumer is a 300-pound blocking back who has been splitting firewood nonstop for the last 12 hours on a subzero day in Manitoba,” said Julia Child, the cookbook author and groundbreaking television cooking star.

Here are 14 more suggestions – including a vegan entry, because vegetable eaters have to shovel, too:

Years went by without finding a credible version of this Southern wonder, but this plate ended my personal drought. Tenderized beef, floured and fried to a golden crust comes blanketed in peppery cream gravy, on a foundation of lumpy mashed potatoes. ($19.95)

It’s not strictly German, but the West Seneca restaurant offers chunks of beef stewed into tenderness in a paprika-infused jus. It’s served ladled over housemade dumpling strips, with choice of potato, vegetable and salad on the side. ($13.25)

Pieces of beef short ribs braised in red wine are mixed in with risotto. Already creamy from the arborio rice’s starch, it’s fortified further with goat cheese that melts into the matrix, along with porcini and wild mushrooms, before being topped off with hunks of beef. ($28)

There are lots of over-the-top offerings at this heavy metal burger joint, but only one patty comes deluged in an avalanche of Colorado pork green chili. Number Seven, as it’s called, has a heart of dry-aged Black Angus beef under Monterey jack cheese, backed up with house-cut fries. ($16)

A dish so simple it started as a cook’s lunch, not fancy enough for the menu. That changed, and the vegan mixture of garbanzo and butter beans, with ditalini pasta with tomato in a garlic-onion broth, has been a mainstay since, served with bread and sautéed hot peppers. ($9.75)

Beef short rib, braised until fork-tender, combined with crimini mushrooms and tossed with broad pappardelle noodles, finished with Parmigiano Reggiano cheese and a big dollop of crème fraiche for a luxe take on the home-cooked standard. ($23)

Diners who think Seabar is a sushi joint forget how chef-owner Mike Andrzejewski “Beat Bobby Flay” on the Food Network. It was his version of the Hawaiian surfer mainstay loco moco. A fat half-pound beef patty seared on the flattop sits on a throne of fried rice, crowned with two fried eggs and sluiced with beef gravy and chile oil. ($14)

This isn’t the cheap plastic packet soup, this is fully fledged broth simmered for days. It tastes like you’re drinking pork gravy, in a good way. The drink-it-from-the-bowl broth is backed up with springy fresh noodles, slices of pork belly and a soft-boiled egg. ($12.99)

The beef burger gets it started, but then it’s topped by another calorie-packed meal by itself. The Quebecois classic trinity of fresh-cut fries, cheese curds and housemade beef gravy gives this handheld serious heft. ($13)

It’s a platter of carbs covered in cinnamon-scented Texas sauce, but not to be confused with the Nick Tahou’s garbage plate of Rochester fame. It’s a lighter cousin, a foundation of crispy thin-gauge french fries, topped with hot dogs, mustard, onions, sliced cheddar and sauce. ($7.25)

A healthy helping of spoon-tender pork, backed up with a generous dune of housemade spätzle pasta, drenched in an earthy gravy with dark beer at its heart. Don’t worry about vitamins – it comes with the most elaborate house salad in town. ($15.95)

You'll need a fork and knife to eat some of the burgers at Allen Burger Venture, including the number "Seven" that os smothered in Colorado pork green chili and Monterey Jack cheese on a brioche roll. (Sharon Cantillon/News file photo)