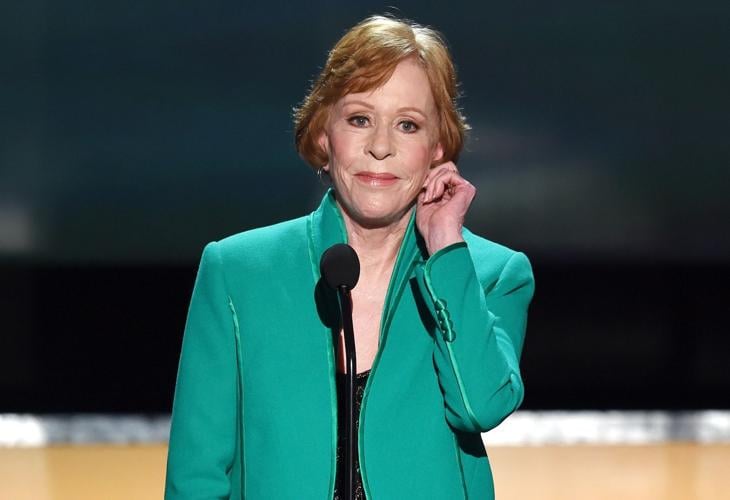 Carol Burnett's signature tug on her ear is likely to make an appearance when she comes to Shea's on Oct. 1. (Getty Images) 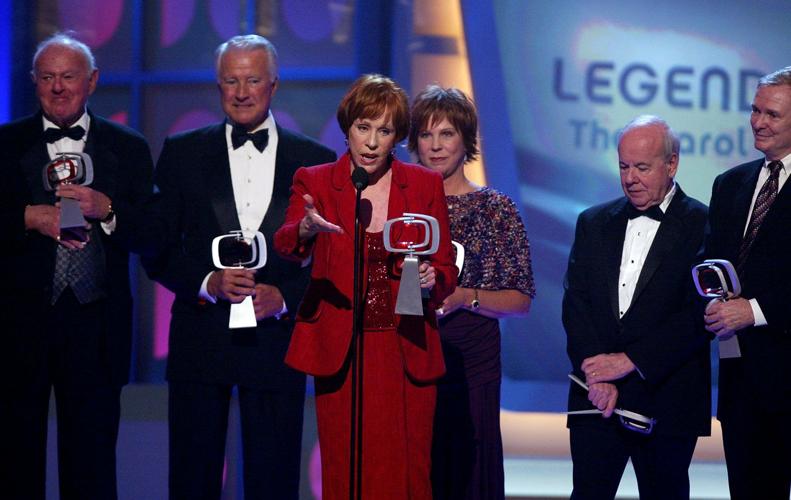 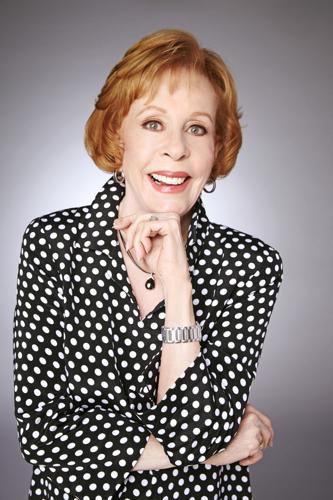 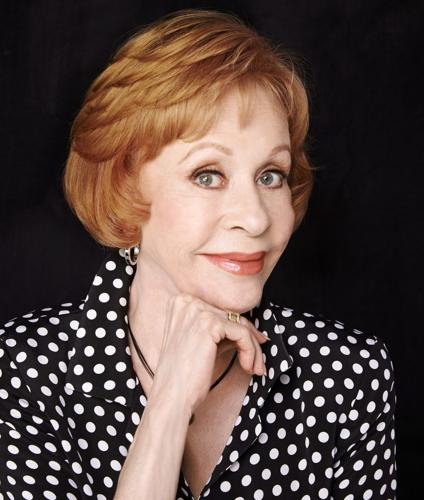 Bring your questions for Carol Burnett to answer during her appearance in Shea's Buffalo Theatre.

Carol Burnett's patented Tarzan yell was loud enough on her variety show to put the jungle call made by the Tarzan actors of her day, from Gordon Scott to Ron Ely, to shame.

It was one of the quirky features TV viewers came to expect when they tuned to "The Carol Burnett Show," which ran Saturday nights on CBS for 11 years from 1967 to 1978. When Burnett called it quits, she left behind 286 shows, 22 Emmy nominations, six Emmy awards and an endearing place in the hearts of millions.

Burnett said she'll do the Tarzan yell when she comes to Shea's Buffalo Theatre if someone asks her to, but the audience member who asks better be prepared to do it, too. The show, taking place at 7:30 p.m. Oct. 1, is billed as "Carol Burnett: An Evening of Laughter and Reflection Where the Audience Asks Questions."

The Q&A format will be familiar to those who remember Burnett's groundbreaking comedy variety show, the first one hosted by a woman. Burnett opened her show by taking questions from the audience, which she'll be doing in Shea's.

"There are never any planned questions, it's all flying without a net," Burnett said. "It keeps the ole gray matter ticking because I have to be on my toes."

Burnett said she has an additional motivation at age 86 to go on the road and perform before live audiences: young people. Because of YouTube and MeTV, Burnett said her career has been discovered anew by adolescents and teenagers, some of whom send her fan mail.

"The enjoyment of hearing people laugh is just wonderful, and to know that because of YouTube I'm getting audiences that are 10 years old and teenagers is a thrill," Burnett said.

Burnett's upbeat disposition belies a difficult childhood. She was born in San Antonio in April 1933 to troubled parents – her mother worked as a publicity writer for movie studios, her father was a movie theater manager and both were alcoholics who divorced by the end of the decade. Burnett moved to Hollywood with her maternal grandmother at an early age, later studying theater and musical comedy at UCLA.

After breaking into TV, including appearances on "The Ed Sullivan Show" and the early game show "Pantomime Quiz," Burnett landed a role in May 1959 in the musical "Once Upon a Mattress,"  for which she earned a Tony Award nomination. In September of that year, Burnett landed a role on "The Garry Moore Show," for which she earned her first Emmy Award. Burnett counts both as career highlights, following her variety show.

"I patterned my show after 'The Garry Moore Show' because I learned a lot from him," Burnett said. "I was a second banana, as they called them, along with Durward Kirby. We'd be sitting around maybe reading the script for that week, and Gary might have a joke or punchline, and he would look up and say, 'You know what, give this line to Carol or give it to Durward, they can say it funnier than I can.' That's the kind of man he was. I learned from him so that even though my name was on ["The Carol Burnett Show"], we had a true rep company."

The show's satire and slapstick came from the show's writers and the repertory cast of Harvey Korman, Lyle Waggoner, Tim Conway and Vicki Lawrence, all of whom played off one another. Comedy sketches included character pieces and film and TV parodies. Like any true variety show, there were musical numbers, too.

While horror stories abound of boorish male treatment and worse of young women actresses and entertainers have become all too common in the #MeToo era, Burnett said she never had a problem. Marrying Joe Williams, the producer of "The Carol Burnett Show" probably had something to do with that, Burnett laughed, while Moore was "a complete gentleman."

"There was never any kind of [negative] stuff going on at all as far as I was concerned, not at all," Burnett said. "Nor did I ever think about the fact that I was a woman doing a comedy variety show. That never really occurred to me that it was unusual. I knew it was, but it didn't register that much."

"Television in those days and that particular Saturday night was a night that people stayed home," Burnett said. "A lot of time I get letters from people saying they grew up watching the show with the whole family, which doesn't happen that much any more."

"It's too bad," Burnett said. "There is something about people gathering together to watch something as a family. It saddens me but that's the way it is. Time marches on."

Burnett continues to periodically appear in film and TV productions. She voiced the animated character Chairol Burnett, who has a brief speaking part in "Toy Story 4," which came out earlier this year.

The pioneering Burnett is glad to see the proliferation of women comediennes.

"There are so many wonderful comediennes now," Burnett said, ticking off the names of Tiny Fey, Amy Poehler, Kristen Wiig, Kate McKinnon and Maya Rudolph. "It's just a wonderful bunch of women. A lot of that glass ceiling is being cracked there, which is good."

The humble Burnett admitted when asked that she is often reminded by fans of the joy she has brought into their lives.

"I feel that from the audiences, and I'm so grateful," Burnett said.

Alan Pergament: Al Michaels was off his prime days in a sleepy Bills win but Kirk Herbstreit was solid

In the postgame show after the Buffalo Bills’ 24-10 victory over the New England Patriots on Prime Video’s "Thursday Night Football," studio a…

Kirstie Alley, who won an Emmy for her role on "Cheers" and starred in films including "Look Who's Talking," died Monday of cancer.

WIVB-TV (Channel 4) Hall of Fame anchor Jacquie Walker will drop the station’s 11 p.m. weekday newscast the first week of January, but will continue to anchor three late afternoon and early evening newscasts for “the foreseeable future.”

"While it’s true that my wife and I did the day-to-day (and night-to-night) work ... it’s also true that Declan was raised by a Buffalo music and arts community that was abundantly generous," Miers writes.

Keke Palmer "set the record straight" on speculation she is expecting her first child as she hosted 'Saturday Night Live' for the first time. Here's that and more celeb news.

The Lady Gaga connection was a coincidence, authorities have said. The motive was reportedly the value of the French bulldogs.

Holiday music takes on many tones – from the sacred (“God Rest Ye Merry Gentlemen”) to traditional (“Silver Bells”), modern (“All I Want for C…

What is stiff-person syndrome? A look at the rare disorder that led Celine Dion to postpone her tour

Celine Dion revealed on Thursday that she is suffering from a rare neurological disorder called stiff-person syndrome that is affecting her everyday life.

Before she became a host on “The Talk,” Amanda Kloots was a fitness instructor and Broadway dancer. The idea of producing and starring in a TV movie? That wasn’t even on the wish list.

‘Election’ sequel in the works from Reese Witherspoon and Alexander Payne

‘Election’ sequel in the works from Reese Witherspoon and Alexander Payne

Carol Burnett's signature tug on her ear is likely to make an appearance when she comes to Shea's on Oct. 1. (Getty Images)

Bring your questions for Carol Burnett to answer during her appearance in Shea's Buffalo Theatre.