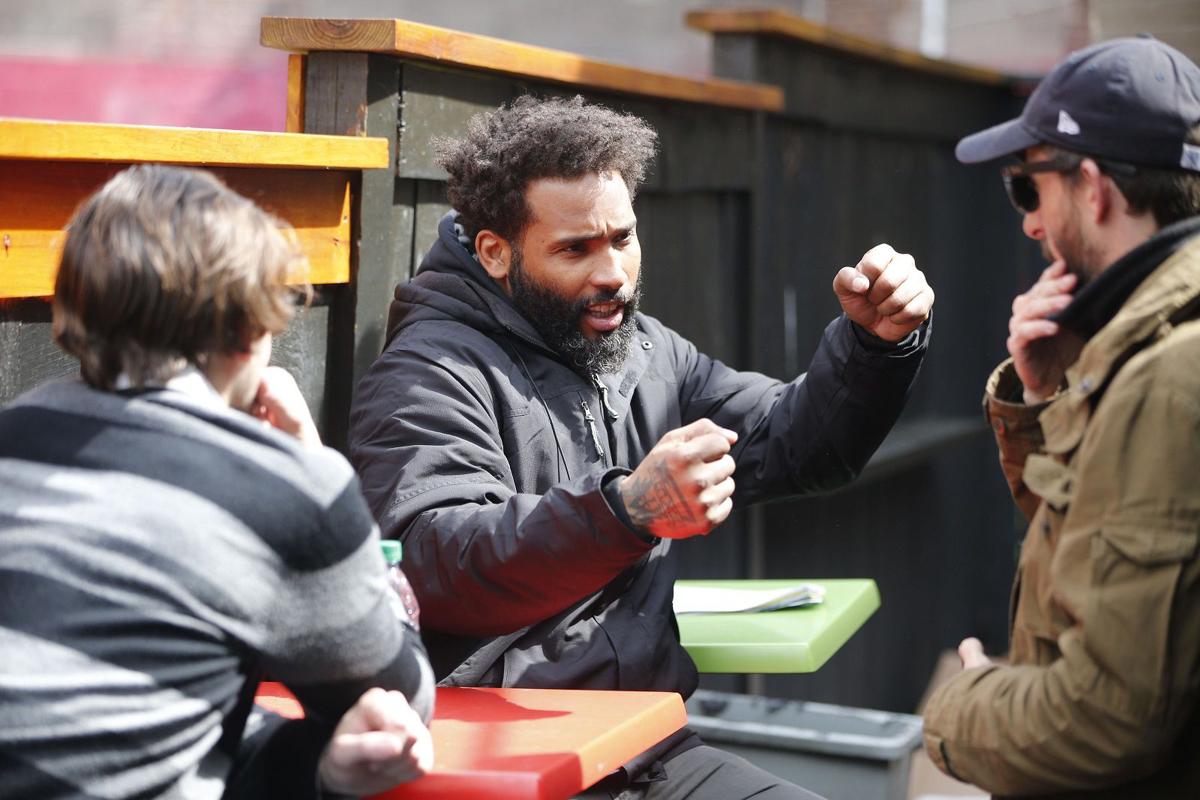 Addison Henderson discusses a shot with director of photography Matt Quinn before filming a scene for the film "G.O.D." on May 22 at Duke's Bohemian Grove. (Derek Gee/Buffalo News) 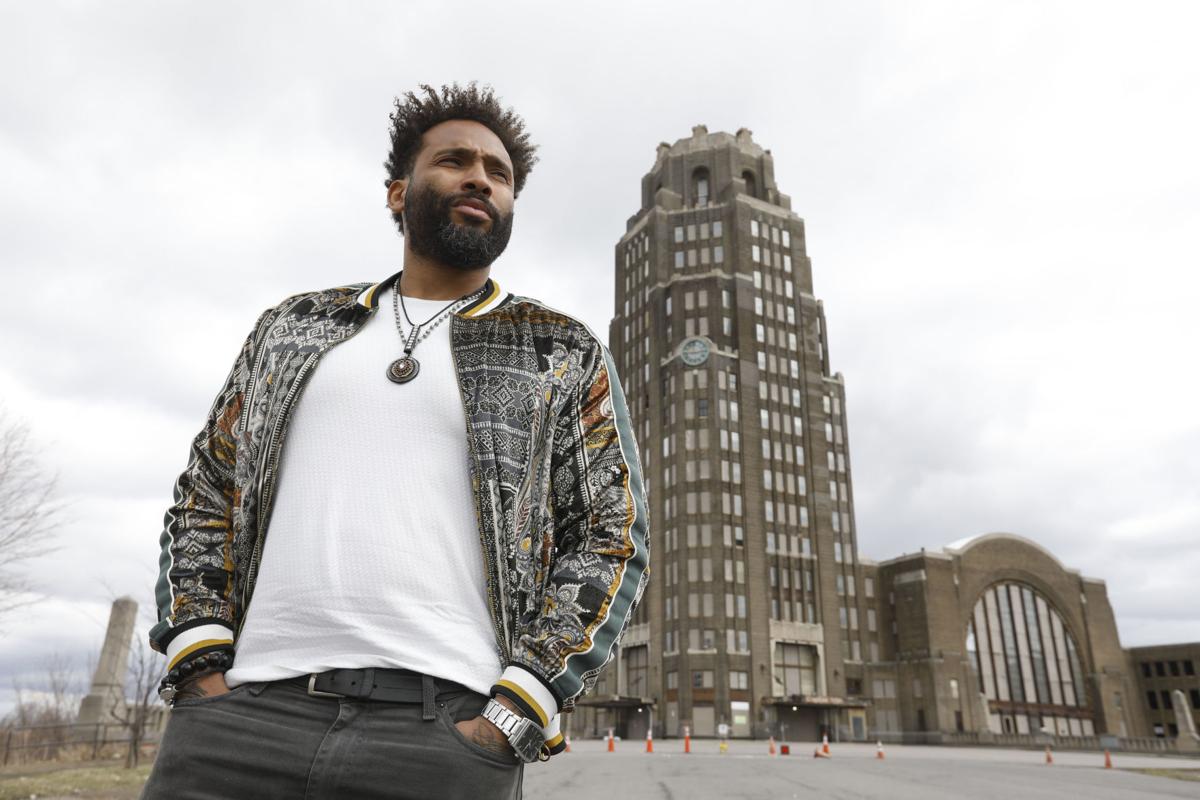 Addison Henderson, here with the Central Terminal in the background, has come home to film his newest project. (Derek Gee/Buffalo News) 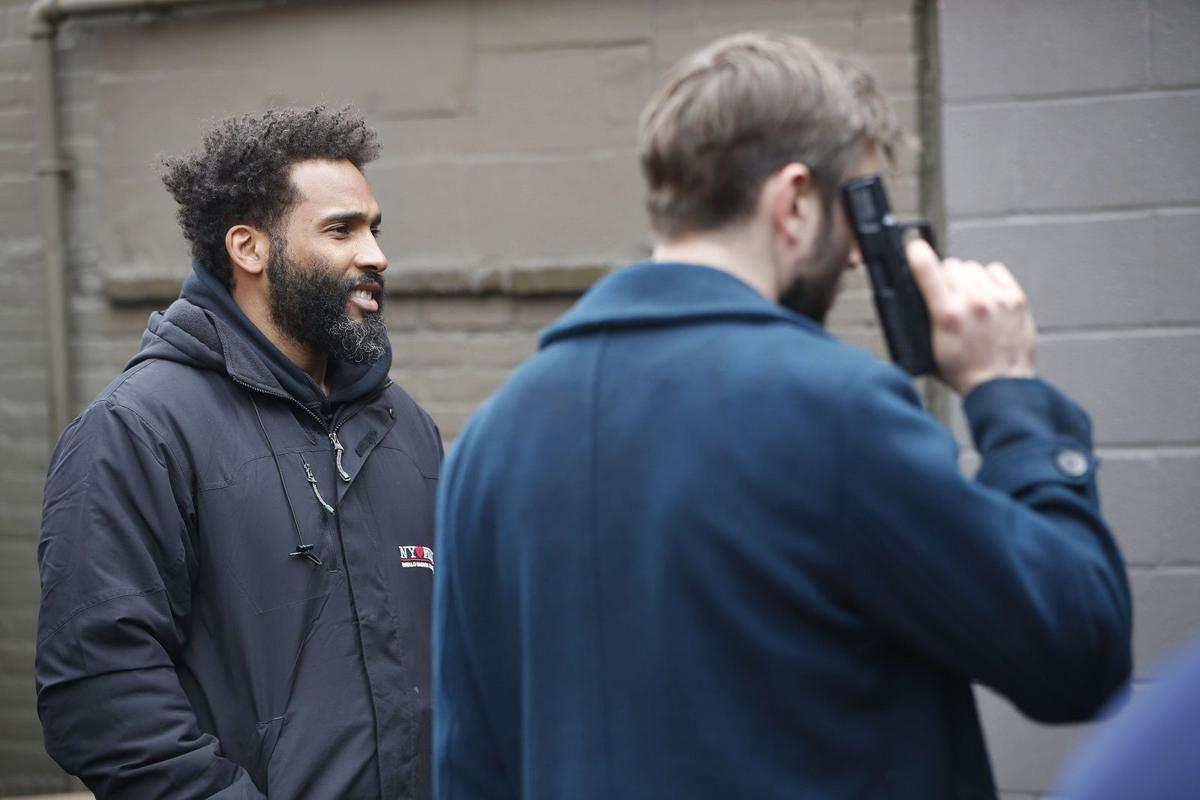 Addison Henderson with one of his actors on the set of "G.O.D." (Derek Gee/Buffalo News)

You know those times when you hear a snippet of a phone conversation and it makes your head spin like a Saturday morning cartoon character?

This is one of those times.

One early morning last week, Addison Henderson stood in a shadowy corner of an Allen Street bar. The dimly lit room was packed with people who were barely visible through a thick haze. Henderson held a phone to his ear.

“We’re going to see his dead body,” Henderson said, his voice dry of any emotion.

He listened for a moment, said a few other things, then added, “It’s him getting shot in the head.” His tone was curiously matter-of-fact. Another pause, and a few more words. “OK then,” Henderson said, and hung up.

This is a movie set, where it makes sense to hear out-of-whack things. Henderson, 37, a Buffalo native-turned-Los Angeles actor and writer, is the star of “G.O.D.” – short for Givers of Death. The movie is filming in town through May 31. But this conversation – which took place in Duke’s Bohemian Grove Bar, one of several filming sites around Western New York – wasn’t Henderson talking as an actor. Piece it together, and you realize his phone call was about getting another shot of another actor, and the bit about a bullet wound to the head was an instruction about makeup. This was Henderson talking as a director, or perhaps as a writer or producer.

On this project, Henderson is all of those: He wrote the film, which he describes as “the story of a hitman trying to find peace during the apocalypse.” Henderson is also producing “G.O.D.,” which is a small-budget, independent project, along with a small cadre of co-producers who are helping run it, fund it, or both.

Likely his busiest job since shooting began earlier this month has been directing it. Henderson is overseeing a crew of 29, along with 28 cast members who have speaking roles. (Many of those jobs are filled by Western New Yorkers who are finding steady work in the film industry; this is the third full-length feature shot locally this year.) At the end of each shooting day, Henderson has made sure to thank the cast and crew.

“When watching him work I find myself amazed by his patience with everyone on the set,” said producer Trent Boling, who is based in Buffalo and met Henderson in 2016, when the film “Marshall” was shooting here. Henderson, who has lived in Los Angeles since the early 2000s, was back home for that shoot, serving as an adviser to his friend and the movie’s star, Chadwick Boseman.

“His awareness of the creative content is fluid from start to finish,” Boling added. “Addison works at an extremely high level.”

Henderson thinks of the story at a heightened level. In a recent interview with The News, his description of the storyline crescendoed into a spillage of spoiler alerts. The basics: A rare pathogen has killed 40% of the world’s population, and many of those who remain are suffering a slow, painful demise. They are disfigured and dying, and have taken to hiring Givers of Death to euthanize them.

Henderson’s character has lost his own family. “He’s searching for something to fill that hurt,” Henderson said. At first, it seemed that becoming a Giver of Death was a way to do that. “But then,” Henderson said, “he realizes that, (although) people want this and request this, is it right?”

Henderson, who has a tall, muscular frame that hints at his past as an athlete at the now-closed Turner-Carroll High School and SUNY Alfred State, is in a storytelling zone. His soft eyes narrowed as he barreled through a description of his characters revealing themselves and redeeming themselves. Then he pulls back.

“Let’s not put all this in the paper,” he said. “I don’t want to give away the whole plot.”

But what Henderson’s story – and his description of it – actually reveal is something about him. He knows it, and as he doles out details about “G.O.D.,” this is where he lands: “I think about, ‘Why am I here?’ ” said Henderson, who at that point, is no longer talking about the movie.

Why am I here? Henderson reflects on that question often; life too frequently has seemed fleeting. When his mother Dianna was pregnant with him, a doctor told Henderson’s parents that there could be complications, and he advised them not to have the baby. Henderson’s father, Bishop William Henderson, insisted that their baby would be born. “My father said, ‘Oh no, we’re going to have the baby,’ ” Henderson said. “He brought another doctor in, and I was delivered successfully.”

Henderson grew up on Buffalo’s East Side, including in the historic Nash House, which was formerly home to the Rev. J. Edward Nash Sr., a leader in race relations in Buffalo in the first part of the 20th century. (The Nash House is now a museum.) Henderson’s father was pastor of the nearby Michigan Street Baptist Church. Earlier in life, the elder Henderson had traveled the world on ministry crusades and captured his adventures on camera. On Saturday mornings, he would take his son to the church, set up a screen and projector, show him footage and regale him with tales.

“My father was literally the greatest storyteller ever,” said Henderson, who heard or experienced so many stories that veered between life and death: His father beat cancer four times. His mother, an Army sergeant, survived an accident in which her vehicle flipped seven times. His best friend was murdered.

Henderson himself brushed against a dark situation when he was 19 or 20. He had bought a new car and driven it to his friend’s house. Guys in another vehicle pulled up, brandishing a gun. " 'Oh my God, I’m not a gangster,' " Henderson said he thought to himself. " 'Why am I here?' "

The guys had clearly mistaken him for someone else. Henderson, still in the car, pressed hard on the gas and got away.

“All of this stuff started happening to me, and it’s like, ‘OK, who’s talking to me?’ ” Henderson said. “What is happening here? I want to fulfill something. I know I have a destiny. I feel something in my heart that I want to change people, I want to help people, and I also want to tell stories.

“All that started happening, and I started to question, ‘What am I supposed to be doing?’ ”

He decided the answer was acting. He packed his car and moved to Newark, N.J., where he had family, with $150 in his pocket. He took acting and directing lessons in New York, and later moved to Los Angeles, where he started doing auditions. But he didn’t find that fulfilling so Henderson moved to Miami, where he worked with a friend making short films. After that, Henderson traveled with his father on a mission trip to Ghana – “an amazing experience, life-changing” – then returned to Buffalo for a film project. Back in his hometown, he worked with Korey Green, whom he met when they were teens, to co-direct a documentary, “The Forgotten City,” which focused on racial issues, politics and crime in Buffalo.

That project set Henderson’s film career in forward motion. Back in Los Angeles, he worked a variety of showbiz jobs by day – directing, editing, casting, producing – and kept writing, too.

He converted a garage behind his house into a writing space, with a couch, desk and full-wall vision board affixed with images of artists, directors and athletes who inspire him. Henderson also hosted regular cookouts with creative friends who came over to drink, eat and talk stories.

“There definitely was a high-level barbecue game back there,” said Henderson’s friend and writing partner, Kevin Polowy, a filmmaker and senior correspondent for Yahoo Entertainment who also grew up in Buffalo.

Those parties, which have since started taking place at others’ houses because Henderson moved, include the actor Boseman, who also plays the superhero Black Panther for Marvel. Henderson is Boseman’s personal trainer and adviser, and accompanies him on-set, watching his performance on monitors and providing feedback.

“I think in the industry these days he’s better known as Chad’s right-hand man, which is not a bad thing at all, but with this (“G.O.D.”) he’s really showing what he can do as a one-man army,” Polowy said. “He’s written something that’s incredibly deep and meaningful, and also entertaining and dark and gritty. I think it’s going to impress and surprise a lot of people.”

Henderson is still on a quest to figure out, Why am I here? It doesn’t stop, and neither does his storytelling brain. “When I can’t sleep at night, I’m supposed to be up creating, fulfilling,” Henderson said. “It never leaves me.”

After he wrote “G.O.D.,” Henderson said, “I got a crazy idea about time travel.” That’s his next script. He also got the idea one recent evening to remake Alfred Hitchcock’s “The Birds.”

“Once I’m in that creative zone, they keep coming,” Henderson said. “For me, once I began to question, I began to get answers.”

Tentatively titled “My Brother’s Keeper,” the project was announced Friday before a screening of Henderson’s new Buffalo-made feature film, “G.O.D.” (“Givers of Death”).

In all, more than 100 films, shorts and episodic series from 20 countries will be presented.

What we know about 'Thor: Love and Thunder'

What we know about 'Thor: Love and Thunder'

Addison Henderson discusses a shot with director of photography Matt Quinn before filming a scene for the film "G.O.D." on May 22 at Duke's Bohemian Grove. (Derek Gee/Buffalo News)

Addison Henderson, here with the Central Terminal in the background, has come home to film his newest project. (Derek Gee/Buffalo News)

Addison Henderson with one of his actors on the set of "G.O.D." (Derek Gee/Buffalo News)