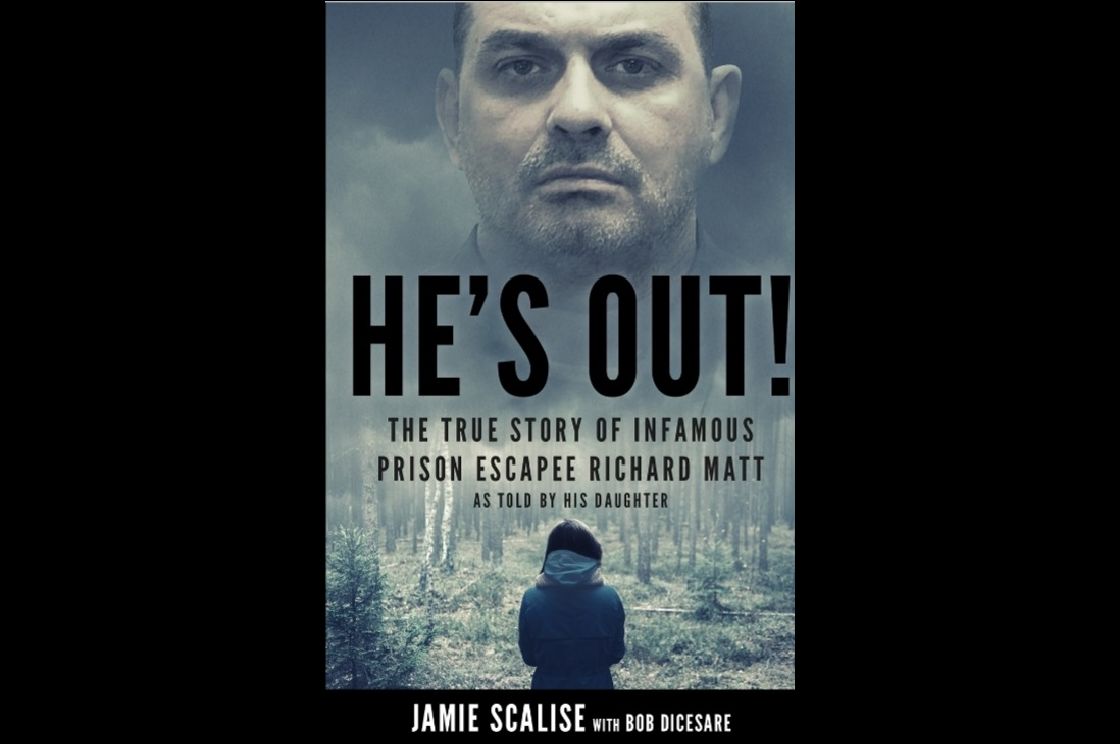 "He's Out," is a new book by North Tonawanda resident Jamie Scalise about her father, Richard W. Matt, a murderer who escaped from state prison in 2015 and was shot dead by a police officer. 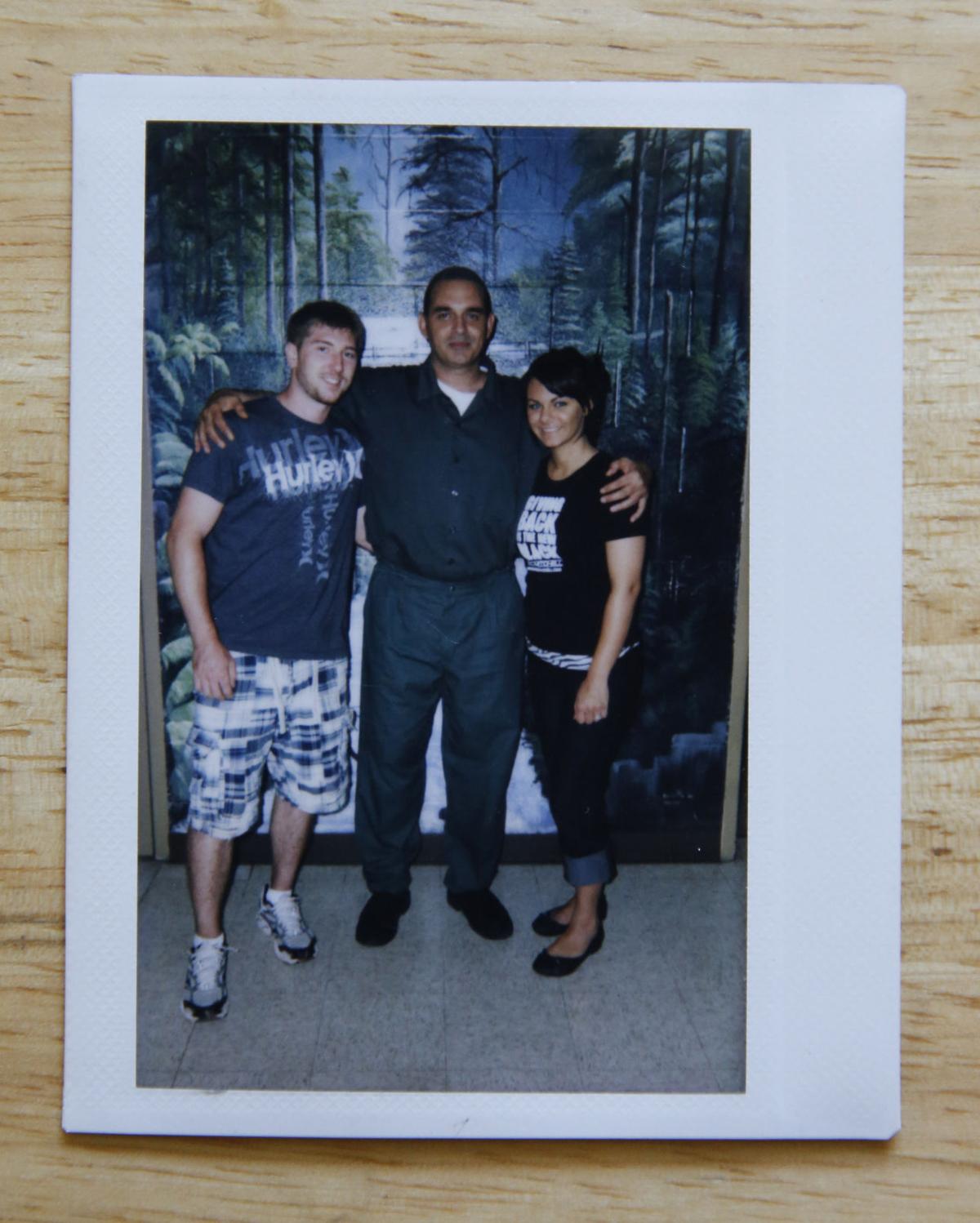 A family photo of Jamie Scalise, right, with her father, convicted murderer Richard Matt, who was shot dead when he escaped from Clinton Correctional Facility in 2015, and her husband Steve, left. Photo taken Wednesday, May 3, 2017. (Sharon Cantillon/Buffalo News)

Jamie Scalise didn’t even know the name of her biological father, Richard W. Matt, until she was 9 years old.

She never got to know him until she was in her 20s, and Matt – a notorious murderer – was serving time in a New York State prison.

But over the past 15 months, Scalise has gotten to know much more about her father than she ever imagined she would. The 29-year-old North Tonawanda woman recently completed a book – called “He’s Out!” – about her relationship with Matt, his hard life, the many crimes he committed and his 2015 escape from one of the state’s most secure prisons.

Scalise also provided insights and use of some of Matt’s personal items to the production company of actor Ben Stiller. Stiller directed "Escape at Dannemora," an eight-part cable television series about the prison breakout that captured national headlines and resulted in the death of Matt, who was shot by police.

The TV series premieres Nov. 18 on the Showtime network.

The TV drama stars Oscar-winning actor Benicio del Toro as Matt, and Paul Dano as David Sweat, the cop killer who escaped with Matt. Patricia Arquette portrays a prison employee who became sexually involved with the two prisoners and helped them to escape.

“I’m going to New York City on Tuesday to see a preview of the series. I appreciate that they invited me, so I can be mentally prepared for what the public is going to see,” Scalise said in an interview on Friday. “From everything I’ve heard, they are determined to make this an authentic, well-done production.”

Scalise, who is married to local contractor Steven Scalise, has two young children and works as a hairdresser. She grew up in the City of Tonawanda, barely knowing anything about her biological father, who abandoned her and her mother when Scalise was a baby.

When Scalise was 9, her mother, Lucille Ciffa-Longo, told her for the first time that her father’s name was Richard Matt and that he had murdered two men, one in North Tonawanda and another in Mexico. At that time, her mother did not tell her the horrible details, including the fact that the North Tonawanda victim was an elderly businessman whom Matt had abducted, tortured and beheaded.

“For most of my life, my father has been like a skeleton in the closet, someone we almost never talked about,” Scalise said.

But when Scalise was 14, her imprisoned father sent the first of a series of impassioned, extremely apologetic letters, telling her that the biggest regret of his life was abandoning her and missing the opportunity to see her grow.

She finally agreed to visit him in prison in 2011, and over the next few years, she grew to love Matt – even though she condemns the violent crimes he committed.

“He is my father, but over the course of writing this book, I have realized that I don’t need to feel any guilt or shame for the terrible things he did,” Scalise said.

When Matt and Sweat tunneled their way out of prison in June 2015, Scalise was not entirely surprised. She said her father had vowed that he would someday escape and come to see her.

A vicious killer or a loving father? To his daughter, Richard Matt was both.

During the three weeks while Matt was on the run, his daughter came under the close scrutiny of police, who watched her home and followed her. She said she cooperated fully with police and told them everything she knew, which State Police officials confirmed for The News last year.

When a police officer shot and killed Matt on June 26, 2015, an odd series of emotions swept over her.

“I absolutely did not wish for him to be killed, but in a sense, I was relieved and had a sense of peace,” she recalled. “I was thankful he was never going to be sent back to prison, and it was a huge relief that he didn’t harm anyone while he and Sweat were on the run.”

About 15 months ago, Scalise began working with Bob DiCesare, an award-winning former Buffalo News sportswriter, on a book about the unusual relationship between Scalise and her infamous father.

The book, which Scalise and DiCesare self-published, is scheduled to be released on Nov. 9. “He’s Out!” will be available on Amazon.com.

“For me, it has been very therapeutic,” Scalise said. “I don’t expect everyone to love it. I’m not trying to justify anything. It’s just my crazy story, and I’m glad we wrote it.”

8 tips for making the most of your reading time

Want to pack more reading into your busy life? Here are some tips.

Books in Brief: Stepping Stones; Ways to Make Sunshine; the Mermaid, the Witch and the Sea

Books in Brief: Fighting Words by Kimberly Brubaker Bradley; A Wish in the Dark by Christina Soontornvat

Cue the "SpongeBob" time card: Twelve years later, author Stephenie Meyer has finally finished the retelling of the "Twilight" novel that she started in 2008. "Midnight Sun" flips the switch on the original bestseller from 2005, which spawned a hit film franchise starring Kristen Stewart, Robert Pattinson and Taylor Lautner. A follow-up to "Breaking Dawn," the new book re-imagines the story ...

Laurie Hertzel: This fraught summer has changed the way you read

Book review: 'A Dangerous Breed' careens toward an inevitable sequel

"A Dangerous Breed" by Glen Erik Hamilton; Morrow (432 pages, $27.99) ___ Despite his criminal tendencies, professional thief Van Shaw is very much a family man - but without the family. So he has cobbled together his own family of friends, a foster child in need of a father figure, his criminal buddies and colleagues from his days as a U.S. Army Ranger. Raised by his late grandfather, master ...

"He's Out," is a new book by North Tonawanda resident Jamie Scalise about her father, Richard W. Matt, a murderer who escaped from state prison in 2015 and was shot dead by a police officer.

A family photo of Jamie Scalise, right, with her father, convicted murderer Richard Matt, who was shot dead when he escaped from Clinton Correctional Facility in 2015, and her husband Steve, left. Photo taken Wednesday, May 3, 2017. (Sharon Cantillon/Buffalo News)