Bam! Ice bumper cars a big hit as Canalside ice rink opens for season
0 comments
Share this
Support this work for $1 a month
1 of 3 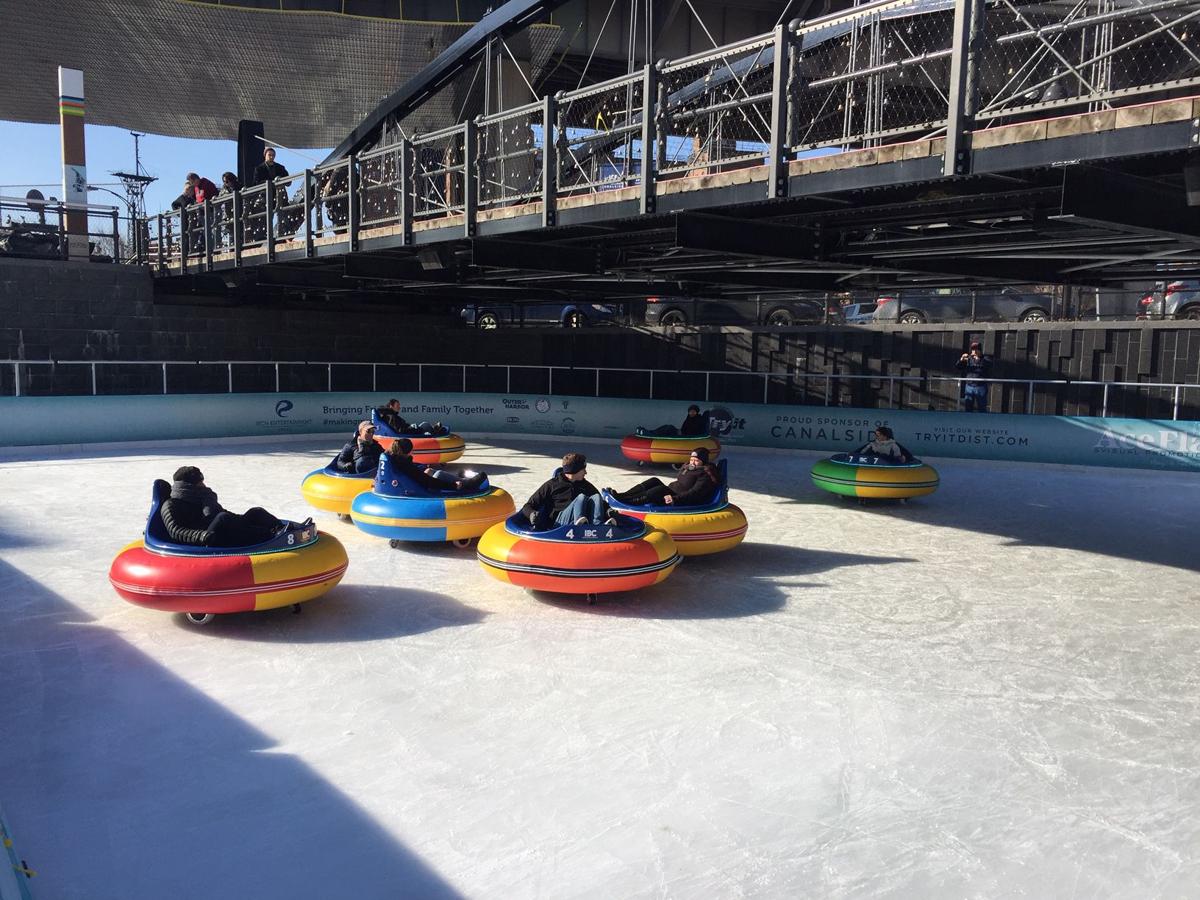 Visitors to the Ice at Canalside give the new ice bumper cars a spin. (Keith McShea/Buffalo News) 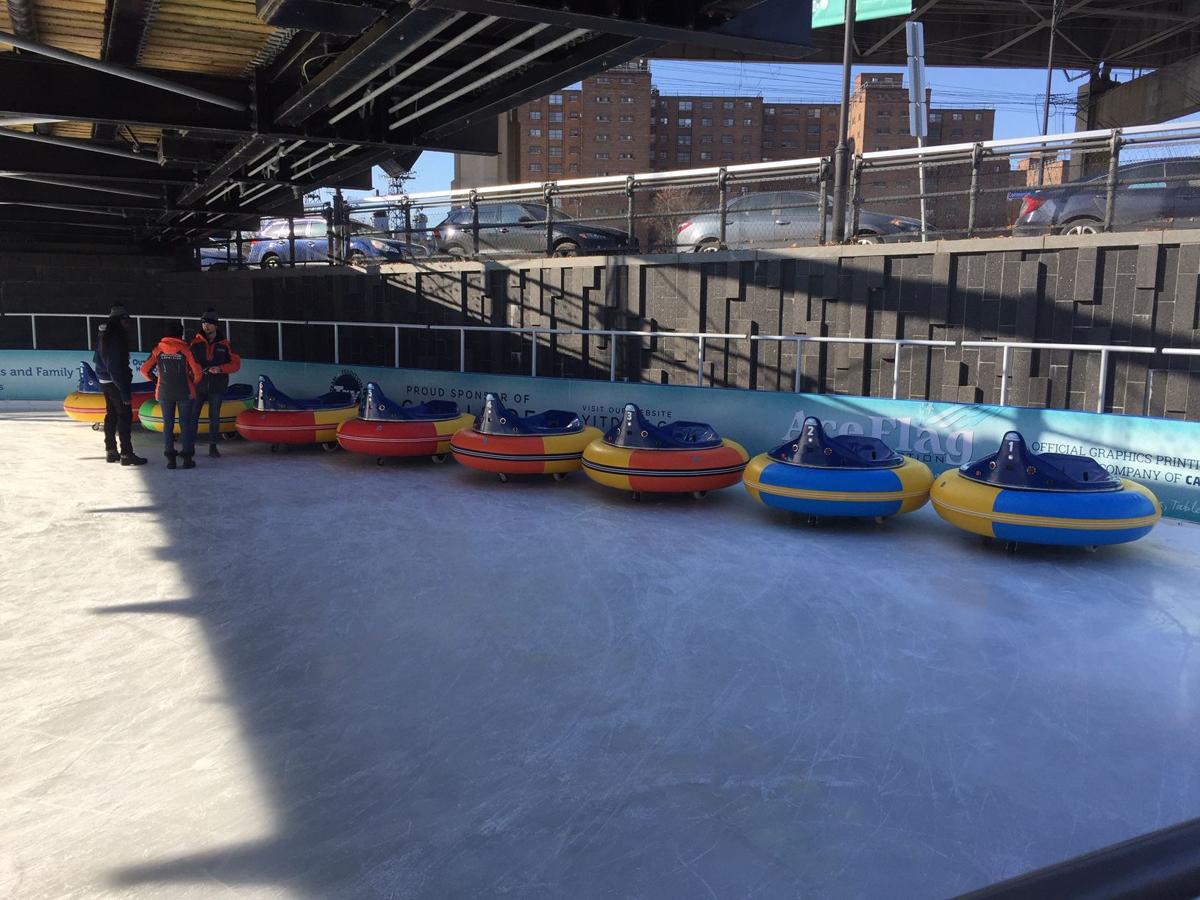 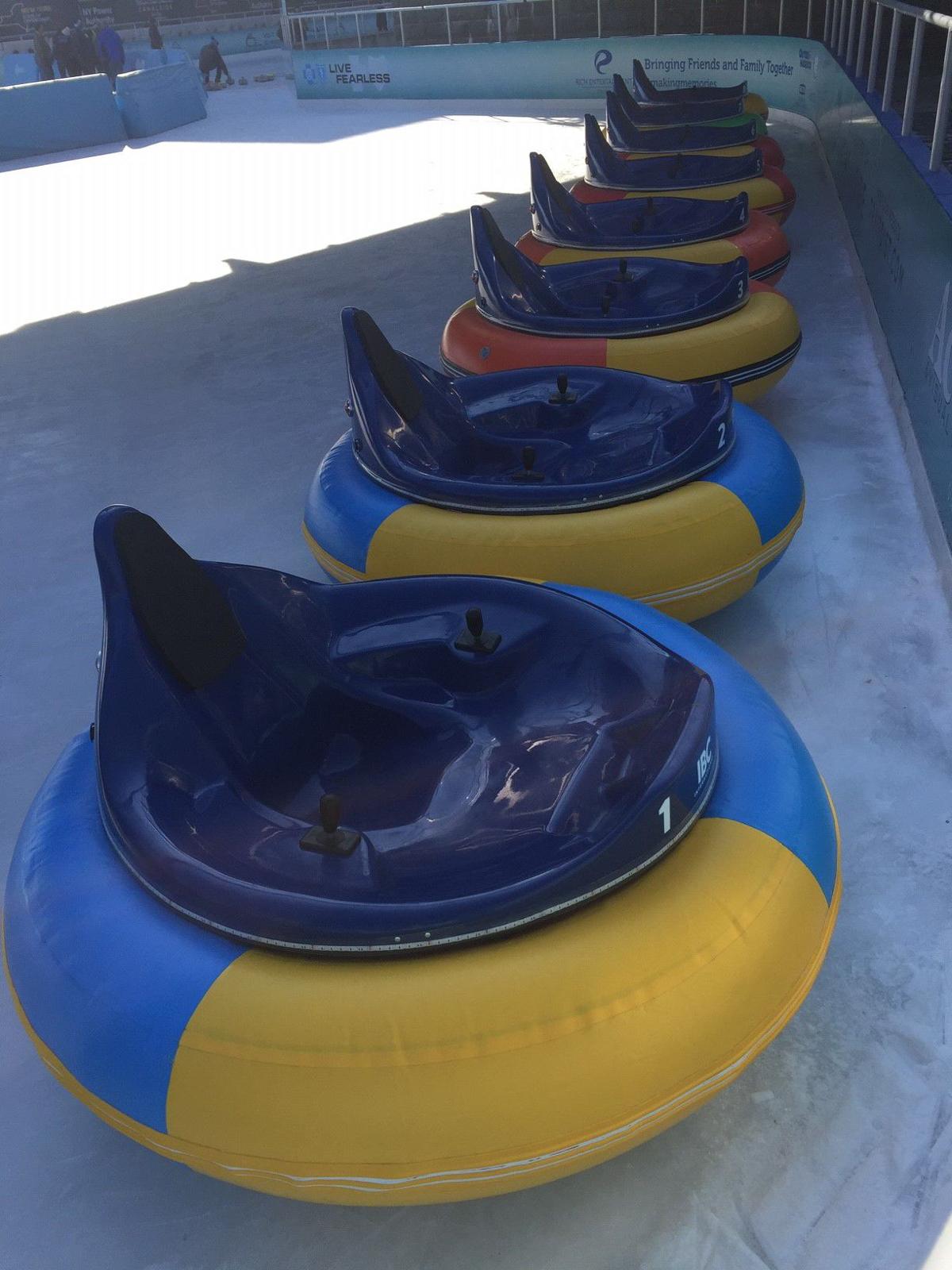 After spending time with relatives on Thanksgiving, many found the perfect day-after release at Canalside.

Line up one of your favorite siblings or cousins, go as fast as you can, and bash into them with your ice bumper car.

"Awesome," said 8-year-old Ethan Marranca, part of the very first session of ice bumper cars at Canalside. "I bumped into my cousins like more than five times. And my cousin Emma was going pretty crazy."

The Ice at Canalside opened Friday morning as an estimated 1,000 guests made their way to the downtown ice rink to skate, play curling and bump, bash and bounce their way through this year's new attraction.

There are eight ice bumper cars sectioned off in an area on the west side of the rink, under the bridge where the Shark Girl sculpture is located. The ice bumper cars — rented for $7 for a seven-minute session — are like traditional bumper cars: Spin around, line someone up, and brace yourself.

"It was a good way to get out the Thanksgiving angst," said Lauren Harris, whose family was visiting from Burlington, N.J., "Who wants to play football on Thanksgiving when you’ve got ice bumper boats?"

"It’s a once-in-a-lifetime experience," said Chuck Harris of San Francisco, who grew up in Buffalo and Syracuse and was part of a clan that celebrated Thanksgiving in Kenmore. "Where else are you going to find bumper cars, ice, for a family battle opportunity like that?"

The bumper cars will be available every day the main rink is open. The hours of operation will vary. Canalside officials said updates on hours will be posted at canalsidebuffalo.com and related social media accounts.

The bumper cars are run by an electric motor powered by a car battery, according to Canalside event manager John Greenan. There are two joysticks, one on each side, that operate the vehicle, which includes a plastic shell of a seat surrounded by a large inner tube.

"The wheels on the bottom have little spikes on them and that's how they grip the ice," said Greenan, who said the bumper cars were manufactured by a Colorado-based company called IBC International.

The bumper cars are available on a first-come, first-served basis. Riders must be 6 years old; children 3 to 5 years old can ride with an adult. One of the misconceptions, Greenan said, is that "it's just a kiddie ride. It's equally as fun for the adult crowd."

Ethan Marranca's little brother, Hudson, rode with father Anthony Marranca and had a strong, concise review when asked if he had fun: "Yeah!"

"He was having a great time, crackin' into brother and mom," said Anthony Marranca, a Lancaster native who now lives in Bettendorf, Iowa. "It was a great time. We did it when it was the water bumper cars, and this was a great time on the ice."

The Marrancas were visiting Anthony's father, Mike, for Thanksgiving.

"It looked really awesome — they looked like they were definitely having a good time bumping around, they definitely had a smile on their face the whole time," said Mike Marranca. "They absolutely love it down here. Every time we come down to Canalside, whether its summer or winter, it seems like they have something a little different for them to do down here."

And that was exactly the plan behind the addition of the bumper cars, said Erin Marra, director of sales and marketing for Rich Products subsidiary BR Guest, which oversees the operation of Canalside.

"We were looking for like that next cool thing," Marra said. "We were looking around at other major cities that have outdoor rinks, especially the downtown cities, like Philly, and places in New York and Boston, and this was something that just kept coming back up. People are chatting a lot about it and we're really hoping that this is the next big thing we're known for at the ice."

The rink opened at 10 a.m. with temperatures in the high 30s and the sun shining.

"We couldn't have asked for a better opening day. We had guests lined up for us to open our doors," Marra said as hundreds used the ice rink.

As the ice bumper cars collided, the two curling sheets were in use all day as Christmas carols played across the grounds.

The Ice at Canalside, which also again includes ice bicycle rentals, is scheduled to be open from 3 to 7 p.m. Wednesdays and Thursdays; 3 to 10 p.m. Fridays; 10 a.m. to 10 p.m. Saturdays; and 10 a.m. to 8 p.m. Sundays. Hours may change during school breaks, on holidays and during inclement weather.

The Canalside Holiday Celebration and Tree Lighting will be held Friday, Nov. 30, with the attraction opening at 3 p.m., activities beginning at 5:30 p.m. and the tree lighting scheduled for 6:30 p.m.

Because of construction on the nearby Explore & More museum, the skate rental tent has been moved on the north side of the rink and the main entrance has moved to the "Shark Girl" statue, near Commercial Street.

Queen Elizabeth II Zoomed with Prince George on his birthday

Jordan Peele has revealed the title of his next project

Jordan Peele has revealed the title of his next project

When Steve Tasker stepped in last season to work alongside play-by-play announcer John Murphy, he made it clear to Wood he would give up the role when the former Bills center could do the broadcasts again.

"Just about everyone who has been to Chris’ – or enjoyed its takeout – has chosen a favorite over the years," writes Andrew Z. Galarneau.

Buffalo bands and artists are being offered something they’ve often been denied during busier concert seasons: prominent stages upon which to display their wares as headliners.

11 delicious Buffalo-area spots to get your picnic on

Here are 11 perfect picnic places in Western New York that are well-maintained and have distinctive charms.

NBC and its numerous sister channels are primarily in Japan to offer 7,000 hours of coverage of the action. The Games will be on multiple channels for 24 hours a day.

"For him to reach out and do that, I don't even have the words. I wish I could just give him a hug," said the mother of one of the victims.

The 37th annual Television Critics Association Awards nominations came out the same week as the Emmy nominations and there aren’t many differences.

Visitors to the Ice at Canalside give the new ice bumper cars a spin. (Keith McShea/Buffalo News)