At Shaw Festival, four shows to entice theater lovers
0 comments
Share this
Support this work for $1 a month
1 of 5 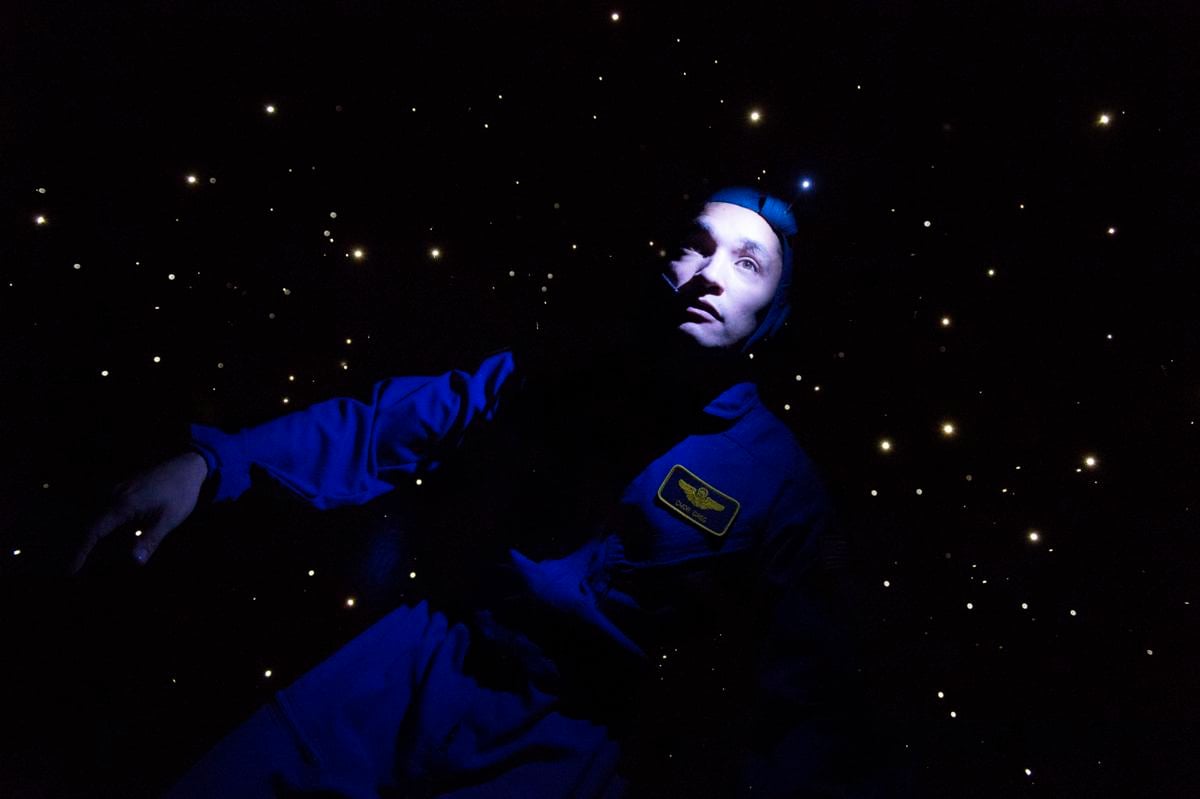 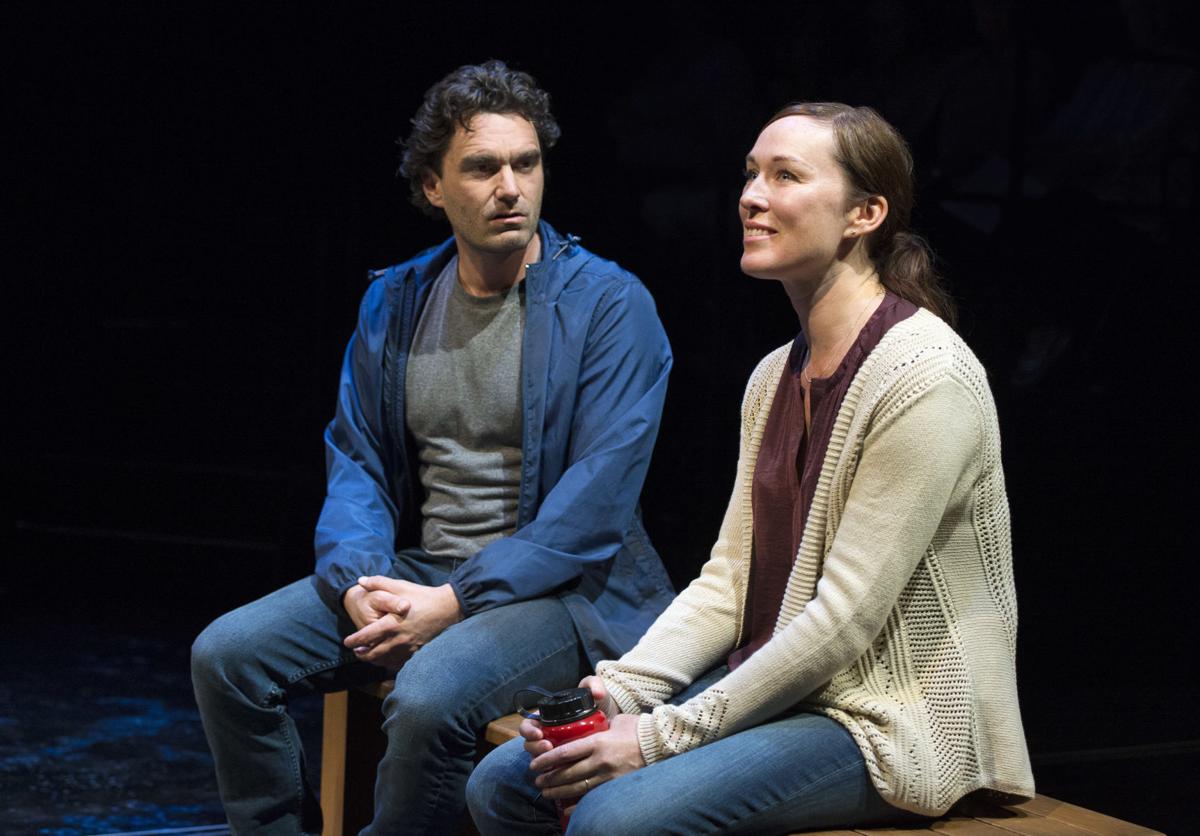 Gray Powell and Moya O’Connell are featured in the Shaw Festival's production of "Middletown." (Photo by David Cooper.) 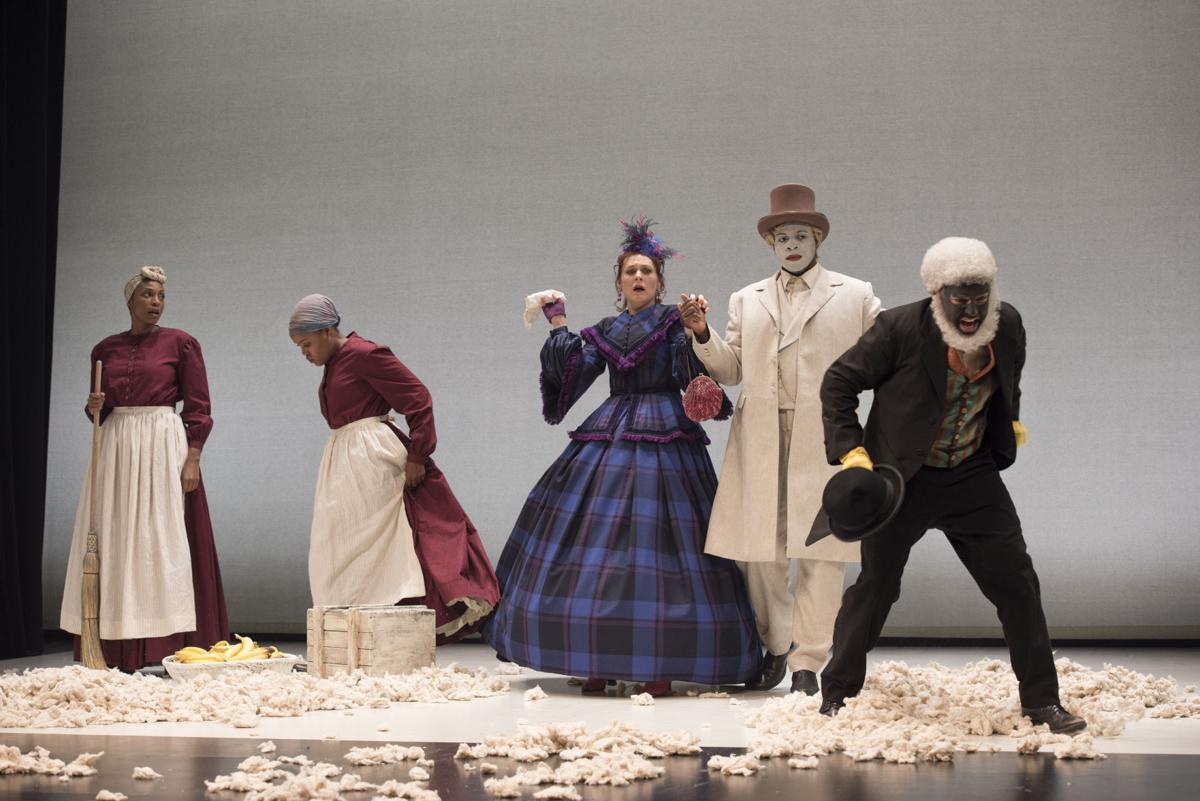 The Shaw Festival's production of "An Octoroon" runs through Oct. 14 in the Royal George Theatre. (Photo by David Cooper.) 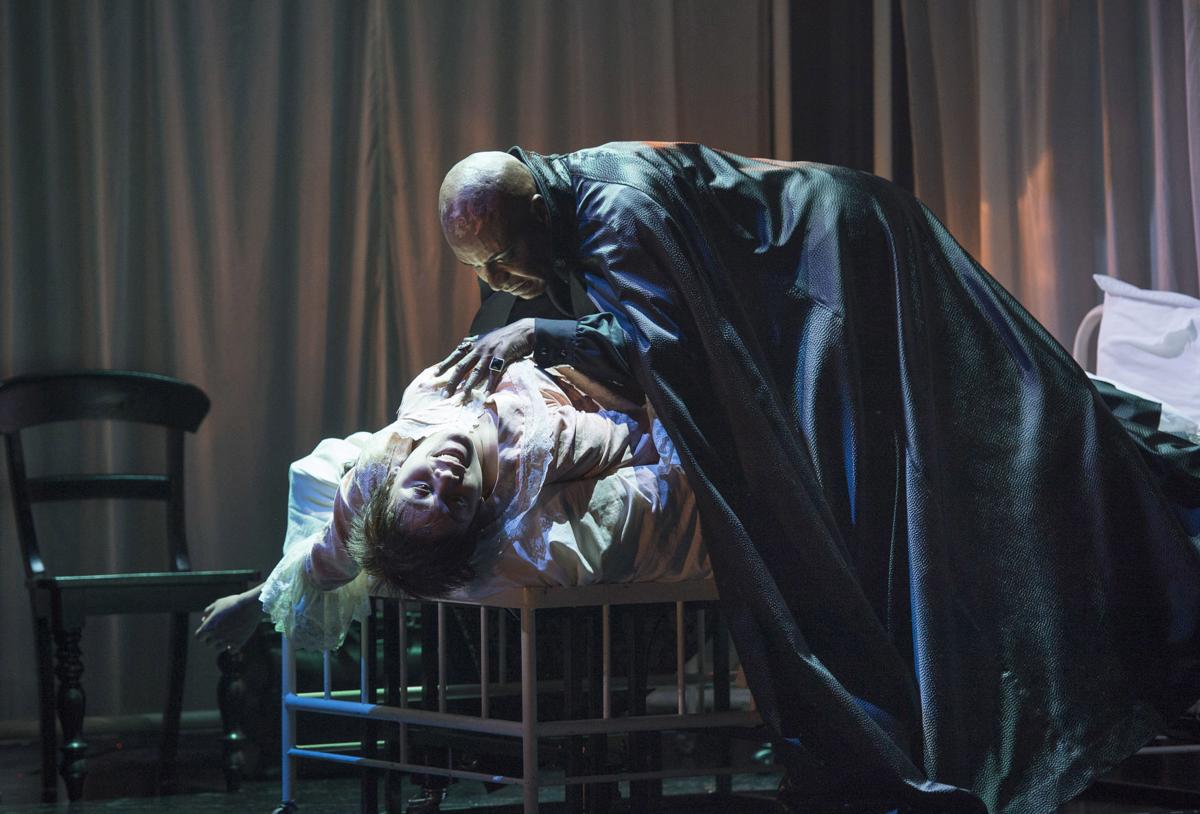 Cherissa Richards as Lucy Westerman and Allan Louis as Dracula in the Shaw Festival's production of "Dracula." (Photo by David Cooper.) 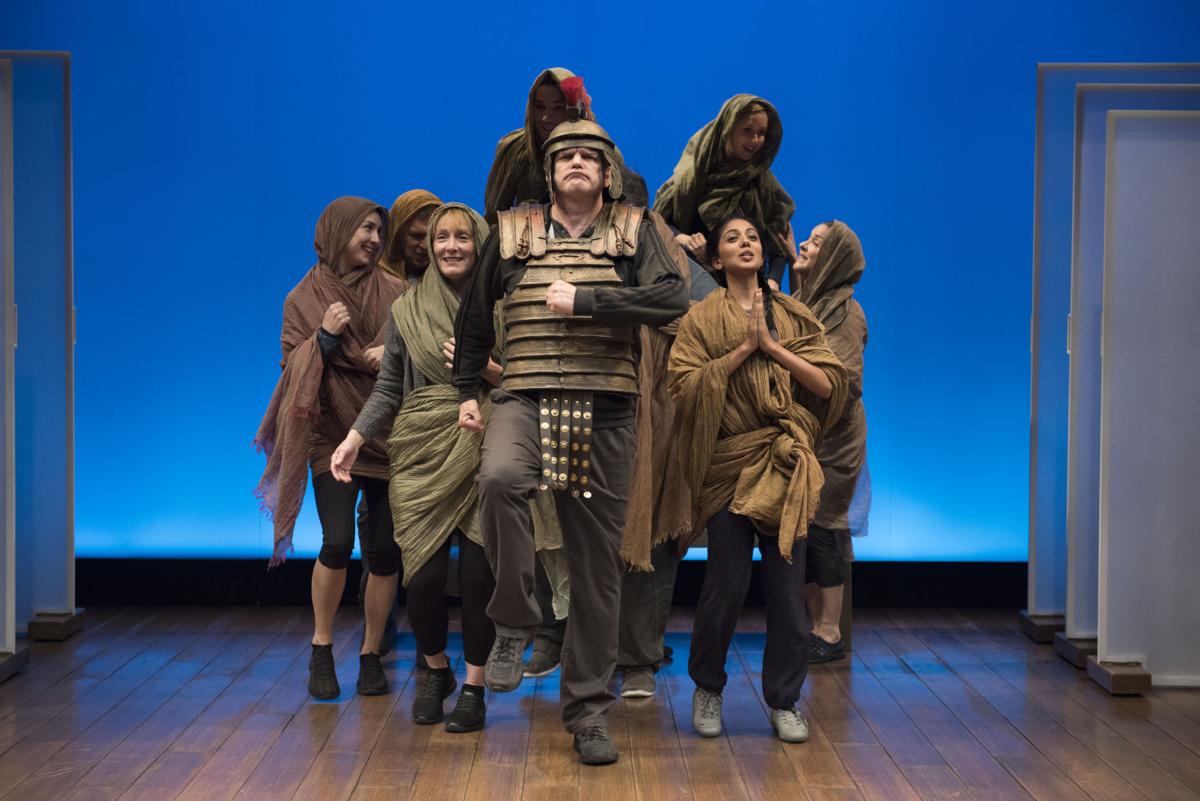 Shawn Wright plays a Roman centurion with the cast of the Shaw Festival's production of "Androcles and the Lion." (Photo by David Cooper.)

As Buffalo's summer theater season winds down, the Shaw Festival in Niagara-on-the-Lake, Ont. is moving ahead at full steam. Its 11-show season, in which comedy and tragedy live in close quarters and music suffuses almost everything, runs through October.

A look at four shows that opened in July:

"Androcles and the Lion," through Oct. 7 in the Court House Theatre

Usually, it is a gimmick designed to make up for a production's lack of vision with a cheap laugh or two at the expense of an unwitting -- or worse, overenthusiastic -- audience member.

Tim Carroll's "Androcles and the Lion," mercifully, is much more thoughtful in its use of audience engagement even if the results are unpredictable and occasionally awkward. As life often is.

George Bernard Shaw's play, at one time a popular piece that would now seem impossibly fusty if played straight, was the perfect choice for this kind of treatment. It tells the story of a meek early Christian tailor (Patrick Galligan) and his treatment at the hands of Roman persecutors and their leonine pets.

Under Carroll's cheeky direction, the show unfolds with the house lights on. An audience member always plays the titular lion, earning the requisite laughs. And others in the crowd are given color-coded balls, which they toss onstage at unpredictable moments to interrupt the action and force a cast member to perform an improvised task. These include personal stories, excerpts from Shaw's lengthy epilogue and harmonized Christian hymns.

It all adds up to a quirky afternoon or evening at the theater and, much to its credit, lends this piece of creaky Shaviana a refreshing infusion of humor and spice.

"Dracula," through Oct. in the Festival Theatre

How many more permutations on Bram Stoker's classic tale are possible before its dramatic fuel is exhausted?

We seem to be getting close to an empty tank, at least going by Eda Holmes' beautifully designed but ultimately anticlimactic production of Liz Lochhead's sex-saturated adaptation of the novel.

Far and away the star of this production is set and costume designer Michael Gianfrancesco, who with projection designer Cameron Davis has conjured a world where terror comes alive in Victorian settings that somehow feel contemporary.

There are plenty of neat stage tricks -- splatters of blood, great washes of fluttering light, sweeps of shadow -- to occupy theatergoers' attentions. But too much of the dialogue seems superfluous to the action, especially toward the wearying end of the first act.

The rest of the cast performs ably in beautiful surroundings, but little about the production sticks. At the final curtain, it vanishes from stage and mind like a puff of Transylvanian smoke.

"An Octoroon," through Oct. 14 in the Royal George Theatre

If you needed proof that the Shaw Festival has moved into the 21st century, look no further than Peter Hinton's production of "An Octoroon."

Branden Jacobs-Jenkins' play, a smart and searing critique of black representation based on a racist 1859 play by Dion Boucicault, is by far the most radical piece the festival has ever produced on its main season.

It is radical from the very start, when a nearly naked André Sills walks out onstage and straight through the fourth wall to give us the setup. He's soon joined by a similarly unclothed Patrick McManus as "the playwright," which we understand to mean Boucicault. And soon enough, after Sills' character downs an entire bottle of liquor to Lil John's "Throw It Up," the show begins in earnest.

Set in the antebellum South, Boucicault's melodrama tells the story of a plantation owner, his evil rival and the woman he falls in love with, who happens to be 1/8th black and thus an unvalued "octoroon." It casts its central character as the white hero in a high-stakes moral drama, which unfolds against a highly stylized backdrop designed by Gillian Gallow featuring silhouetted figures in the style of the visual artist Kara Walker.

Even though it is presented with tongue firmly in cheek as a metatheatrical device, the melodramatic style can become grating. However, the interruptions from Sills' omniscient narrator and other contemporary punctuation marks help to remind audiences of the critical lens through which they are viewing the action.

The action, the era and the approach are all absurd. The lens provides painful clarity. And the lesson, which comes in one of the most devastating closing scenes of any American drama, hits hard.

"Middletown," through Sept. 10 in the Jackie Maxwell Studio Theatre

There are moments in the theater, and they can only happen in the theater, when the full weight of the cosmos seems to bear down on you in your seat until you lose all sense of where you are.

Several of those moments occur in Will Eno's charming, devastating play "Middletown," consummate production of which is now running in the newly renamed Jackie Maxwell Studio Theatre. Meg Roe directs an immensely talented cast, whose members wring torrents of emotion and meaning out of scant material.

The play is set in a nowhere place, in a nowhere time. Like its most obvious antecedent, Thornton Wilder's "Our Town," its main themes are the main themes: life and death. It centers on two unhappy characters, a recent transplant to Middletown (Moya O'Connell) whose husband has abandoned her to have a child on her own; and a man (Gray Powell) who has spent his entire life searching in vain for a place of comfort.

The show begins with the cast using erasable markers to draw the streets of Middletown onto the stage, an attempt to give some shape to the shapelessness of their lives. We meet an eager librarian (Tara Rosling, excellent as always), a druggie down on his luck (Jeff Meadows, ever-affecting), a cop struggling to balance power and compassion (Benedict Campbell, who always looks like he belongs).

The interaction between Powell and O'Connell is the most affecting part of the production, but in every aspect it brims with sadness and vitality. This ranges from Camellia Koo's perfectly simple set design to Powell's almost unbearable performance of his character's final struggles.

The members of the Shaw Festival, still reeling from the death of the vital young cast member Jonah McIntosh, in July, have been through a lot this season. It is difficult to imagine any one of them watching this play without thinking of their friend.

The best literature attempts the impossible task of placing such incomprehensible events in some kind of perspective. "Middletown" is such a play. For anyone who has ever contemplated where they fit in the larger scheme of things, it begs to be seen.

Abby Fridmann has been the morning news anchor and a reporter at a Nexstar station in Burlington, Vt.

These are some of the strangest items TSA won't let you bring in your carry-on bag.

If we loved music in the past, we need it today, even more so in a reality where experiencing it live is both potentially risky and rare, writes Jeff Miers

WNY singer to appear on NBC's 'The Voice'

It isn’t clear if the graduate of Christian Central Academy in Williamsville will be seen in the first two nights of the blind auditions.

Gray Powell and Moya O’Connell are featured in the Shaw Festival's production of "Middletown." (Photo by David Cooper.)

The Shaw Festival's production of "An Octoroon" runs through Oct. 14 in the Royal George Theatre. (Photo by David Cooper.)

Cherissa Richards as Lucy Westerman and Allan Louis as Dracula in the Shaw Festival's production of "Dracula." (Photo by David Cooper.)

Shawn Wright plays a Roman centurion with the cast of the Shaw Festival's production of "Androcles and the Lion." (Photo by David Cooper.)