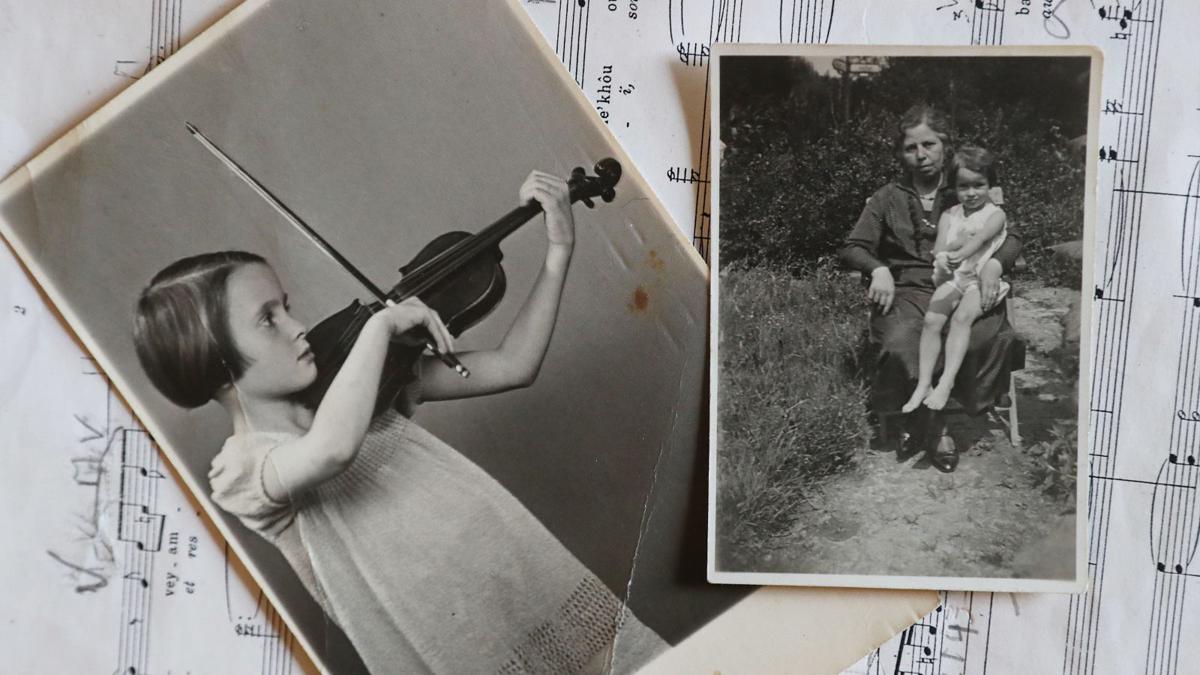 At left, Britta Hausmann plays the violin as a young girl. At right, she sits on the lap of her grandmother, Toni Marcus, who later died at Auschwitz. (Sharon Cantillon/Buffalo News) 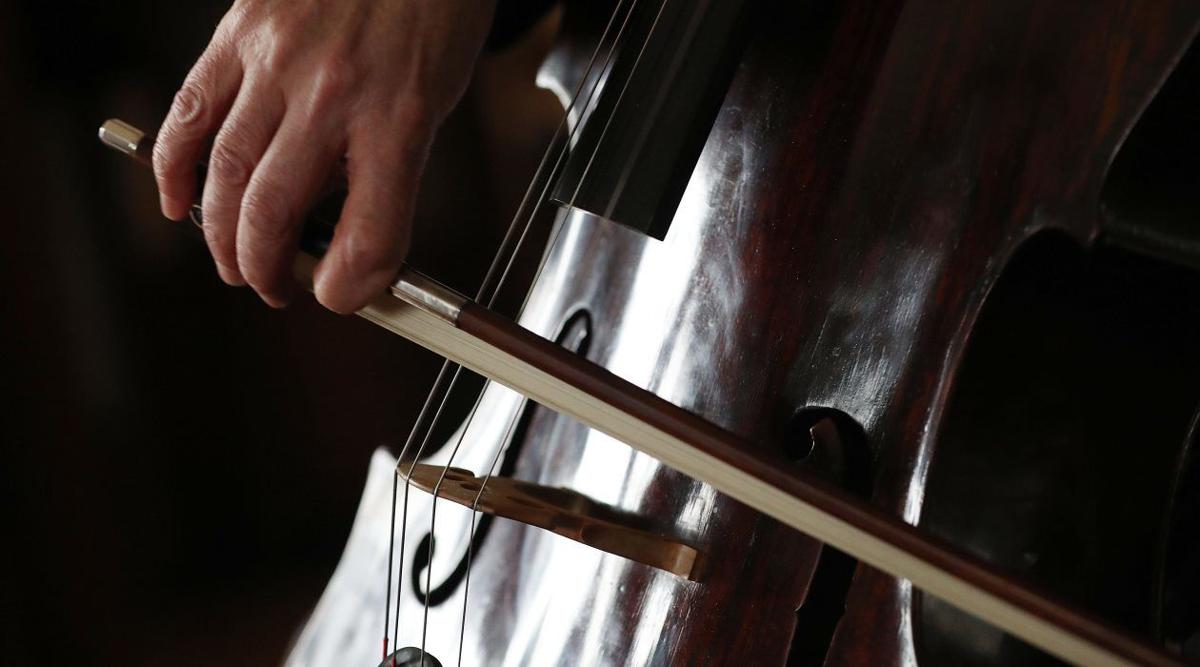 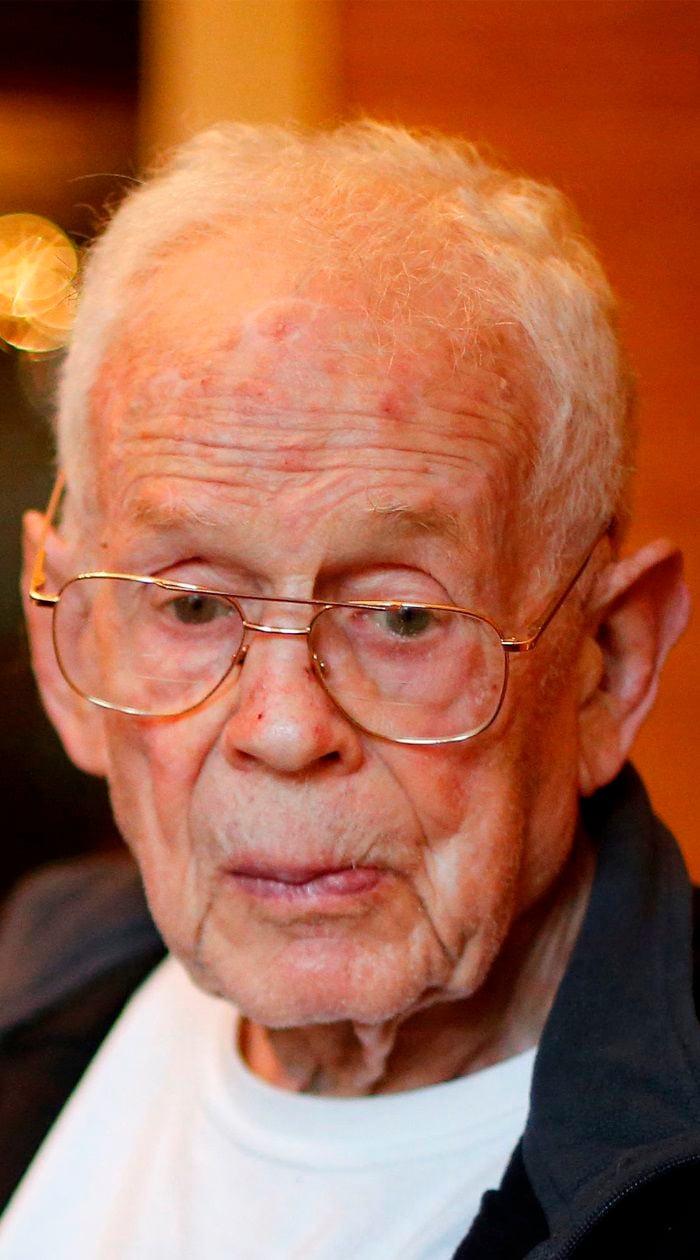 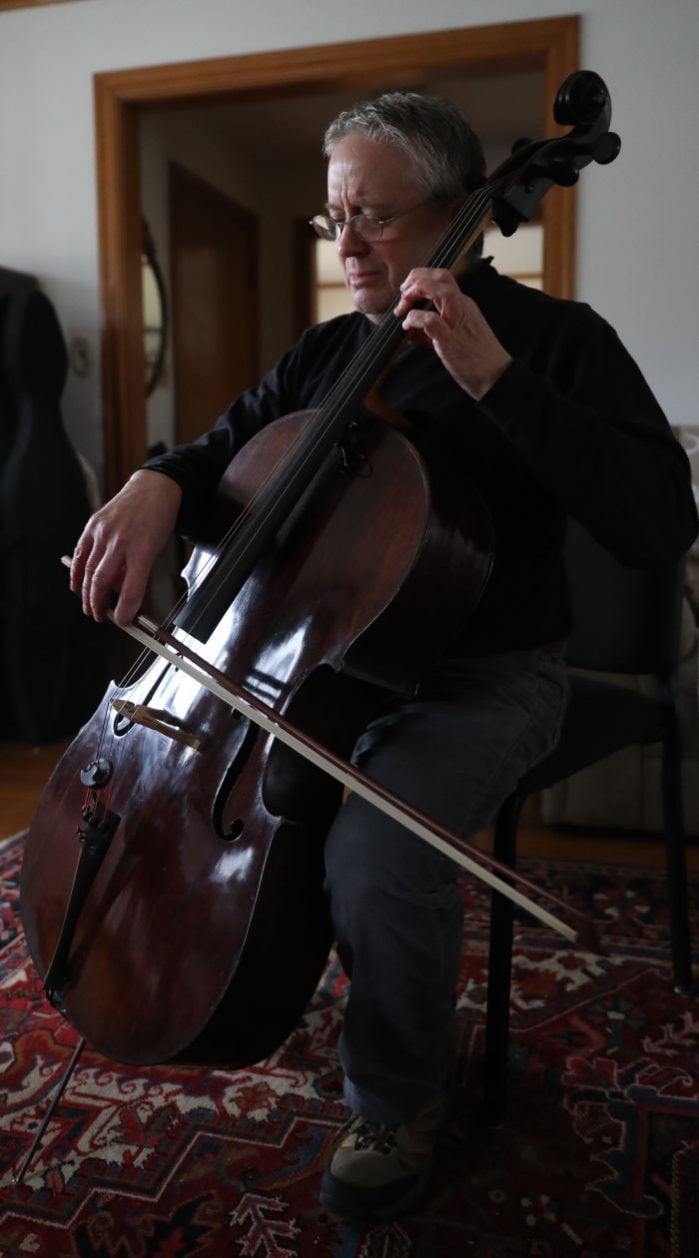 In mid-March, when the Buffalo Philharmonic Orchestra tours Poland, it will be a time of celebration and, with luck, triumph.

Cellist Robert Hausmann, though, will be making a poignant side trip.

His mother, Britta, had been a little girl in Germany when Hitler came to power. She told him about how she had seen Hitler’s soldiers parading down the Kaiserallee, one of the city's main avenues. The family was Jewish, and Britta’s parents sheltered her from the terrible news of the growing Nazi threat. When they sailed to America on the Ils de France, Britta, then 9, saw it only as a happy event. They were leaving the past behind.

One picture she kept, though, kept a bit of that past alive. It is a faded photograph of tiny Britta with her grandmother.

The photo haunts Hausmann. Now 89 and with failing faculties, Britta always recalled her grandmother in the simplest of terms.

After leaving Germany, Britta never saw her again. Her grandmother, though the family begged her to join them, chose to stay put.

In 1935, she had become a Roman Catholic, and her devoutness is part of family lore.

“She was a fervent Catholic,” Hausmann said. “And she said, ‘My priest will protect me.’ ”

That was where the story ended, as far as the family was concerned. The facts were confirmed by documents Hausmann recently procured from historians in Essen, Germany. His great-grandmother was deported July 21, 1942, and sent to Theresienstadt. She died May 15, 1944, in the gas chambers of Auschwitz.

That led to Hausmann's resolve to visit Auschwitz when the BPO went to Poland.

He wanted to play for all the family members his family lost to the Holocaust – 11, by one account, on his father's side. He wanted to honor the memory of his father, Ernest Hausmann, who died recently. Born in Heidelberg, Ernest Hausmann fled the Nazis and worked his whole life to ensure the horrors of that era would never be forgotten.

Above all, Robert Hausmann wanted to play for his great-grandmother. She will be most on his mind when, at Auschwitz, he plays the Kaddish, the ancient Jewish prayer of mourning.

"It's going to go off into the space where her atoms went," he said. "Where her ashes went."

There are no words to express such sorrow. Yet the words of the Kaddish, originally in Aramaic, are full of joy and acceptance of God's will.

"Blessed and praised, glorified and exalted, extolled and honored, adored and lauded be the name of the Holy One, blessed be He, beyond all the blessings and hymns, praises and consolations that are ever spoken in the world; and say, Amen," is how one line translates.

Hausmann's inquisition into what exactly happened has yielded new details. The papers sent to Hausmann from Germany give a stark outline of the facts.

Hausmann's great-grandmother was born Feb. 14, 1875, in the town of Munchengladbach. Her name was Toni Bellerstein. Throughout her life, she was known as Toni.

Her parents, Tirza and Salomon Bellerstein, ran a Modehaus – a fashion store. In 1896, she married Emil Marcus, 14 years older. Their son Paul was born that same year. Another son, born two years later, died as a child.

Toni Marcus and her husband adopted the Christian religion, entering a Protestant church. They were wealthy and influential in Essen, the industrial town on the Ruhr River. Their son Paul grew up to be a doctor. Emil died in 1924, and Toni never remarried.

Instead, she began a new chapter of her life. The documents stated that a priest, Joseph Emonds, baptized her into the Catholic Church on April 20, 1935. She added “Maria” to her name, becoming Maria Antonia Marcus.

Emonds, the papers continue, hid Maria Antonia at his family's farmhouse in Erkelenz-Terheeg.

Father Emonds was a figure of note in the German resistance. He smuggled Jews over the border, and aided other resistance fighters. Throughout the war, he continued efforts to save Jews and other people persecuted by the Nazis for various reasons.

These facts shed new light on the words Hausmann's great-grandmother spoke to her family: "My priest will protect me.”

How the Nazis closed in on her, and what other people were with her, are a mystery. But the startling story was one that Hausmann was glad to hear.

Special project: Survivors of the Holocaust

On a February day in Buffalo, Hausmann sat with his cello in his Amherst living room. A fire crackled in the fireplace.

Hausmann began playing the Kaddish. He has an intense interest in exploring Jewish music, and was loosely following an arrangement for voice and piano by Maurice Ravel. The score was much loved and much Scotch-taped.

Emerging out of nothingness, the music gradually built until it was soaring. Finally, it came gracefully down to earth. Hausmann drew out the last note, letting it fade with a soft scratch into silence.

"When you are playing for someone, it's not a performance," he said. "It's a prayer. It's a connection."

His visit to Auschwitz will take place either March 17, a day off, or March 18, when the BPO has an evening concert in Wroclaw.

"I'm still trying to figure out when my cello will be available," he said.

Hausmann wondered, when he first dreamed of making the trip, how he could make it happen. "I thought, how am I going to get in contact with them? I can't just show up."

Mara Koven-Gelman of the Holocaust Resource Center of Buffalo was able to put him in touch with Andrzej Kacorzyk of the Auschwitz-Birkenau Memorial.

"Your initiative is very moving," Kacorzyk wrote to Hausmann. "I and my staff will be honoured to help you." He explained the most suitable place to play the Kaddish would be the monument devoted to the victims of Auschwitz-Birkenau located in the Memorial Site Birkenau.

"I've played weddings," he said. "You just have to go with the flow."

Whatever happens, it is hard not to imagine Maria Antonia listening.

And, perhaps, the priest who risked his life trying to save her.

Father Emonds managed to elude the Gestapo and survive the war. He died in 1975. In 2013, Yad Vashem, the World Holocaust Remembrance Center, recognized him as one of the Righteous Among the Nations, alongside Oskar Schindler and the heroic Dutch citizens who protected Anne Frank.

The list, and the story he shares with Hausmann's great-grandmother, bears witness to the love and compassion that can thrive even in the worst of times. The love that is leading Hausmann to bring his cello to Auschwitz.

"It's not 6 million people who were killed," Hausmann reflected. "It's 6 million stories."

Marvel's Guardians of the Galaxy game is here

This season, each Sabres player was offered the opportunity to choose their own “biscuit in the basket” anthem.

Who was Halyna Hutchins, the director of photography killed by prop gun?

The film industry has been left shocked and in mourning after cinematographer Halyna Hutchins was killed on set when Alec Baldwin discharged a prop firearm.

Jeff Simon: In praise of cop and crime shows, the comfort food of a TV diet

Alan Pergament: The Bills will get a fortune in the next TV contract. That will have no effect on stadium talks

“The national revenue share that has made the NFL great and sustainable for small markets does not translate into what we need to make a new stadium competitive in Buffalo,” Pegula Sports and Entertainment executive vice president Ron Raccuia said.

At left, Britta Hausmann plays the violin as a young girl. At right, she sits on the lap of her grandmother, Toni Marcus, who later died at Auschwitz. (Sharon Cantillon/Buffalo News)