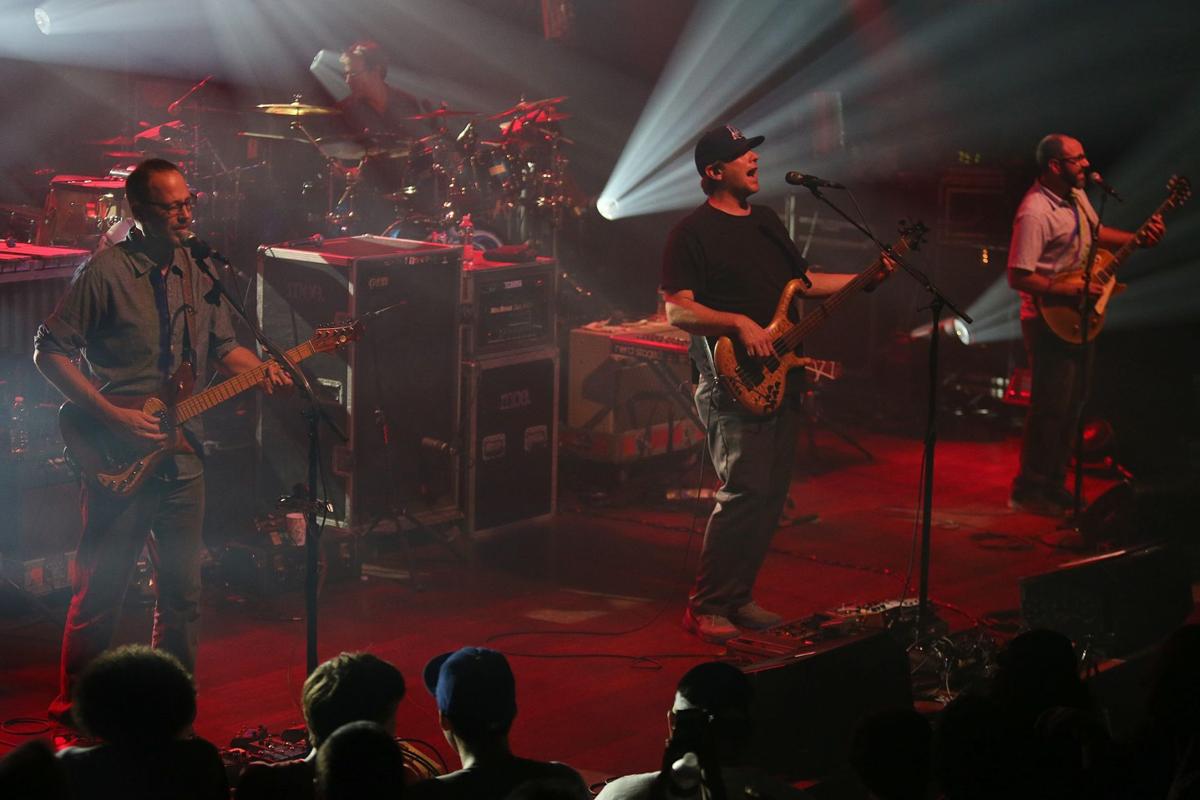 Moe. is coming home to kick off its 30th anniversary tour with three shows in Buffalo. Chuck Garvey, left, Rob Derhak and Al Schnier, perform at the Town Ballroom in 2013. (News file photo) 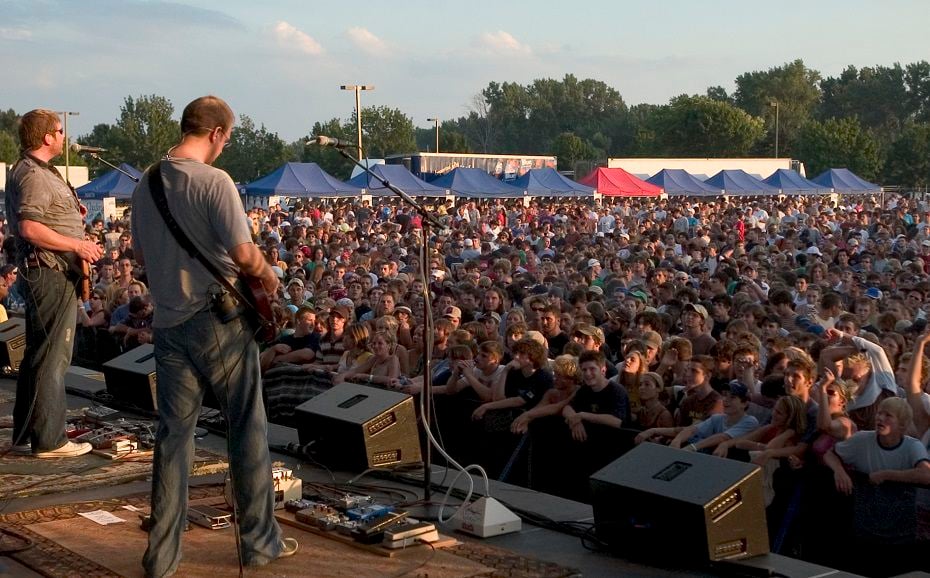 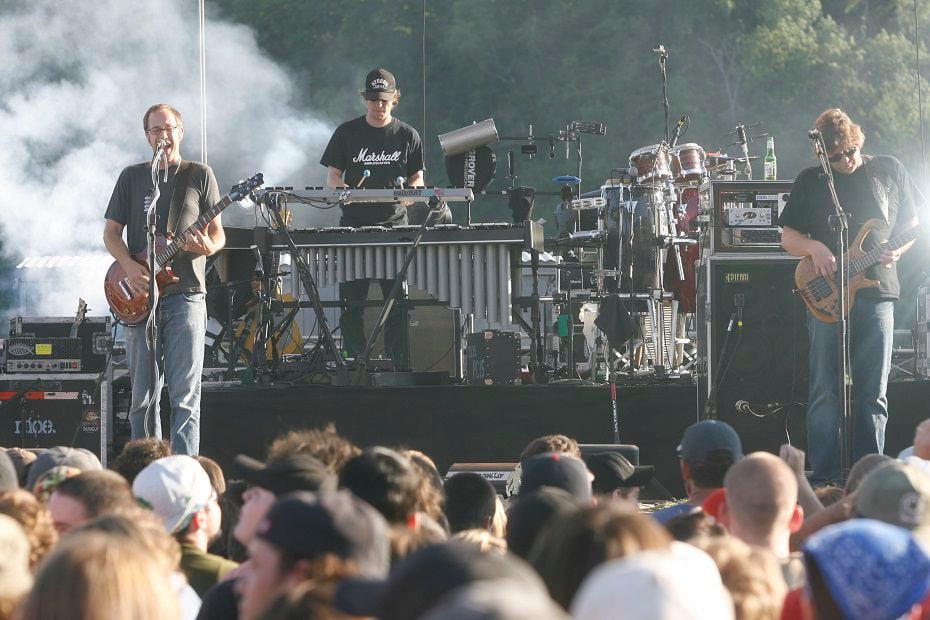 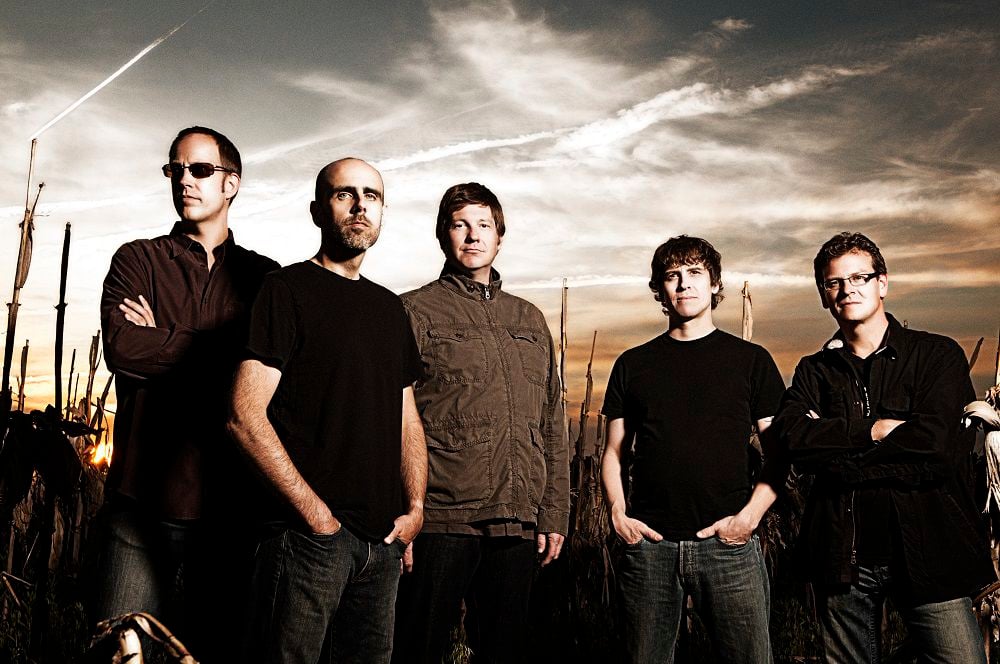 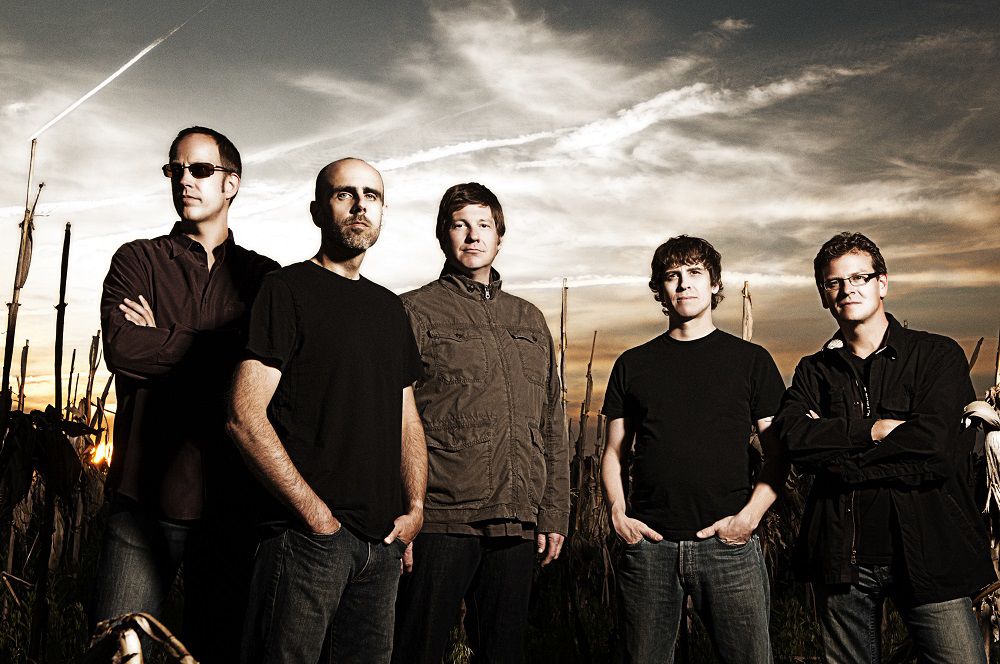 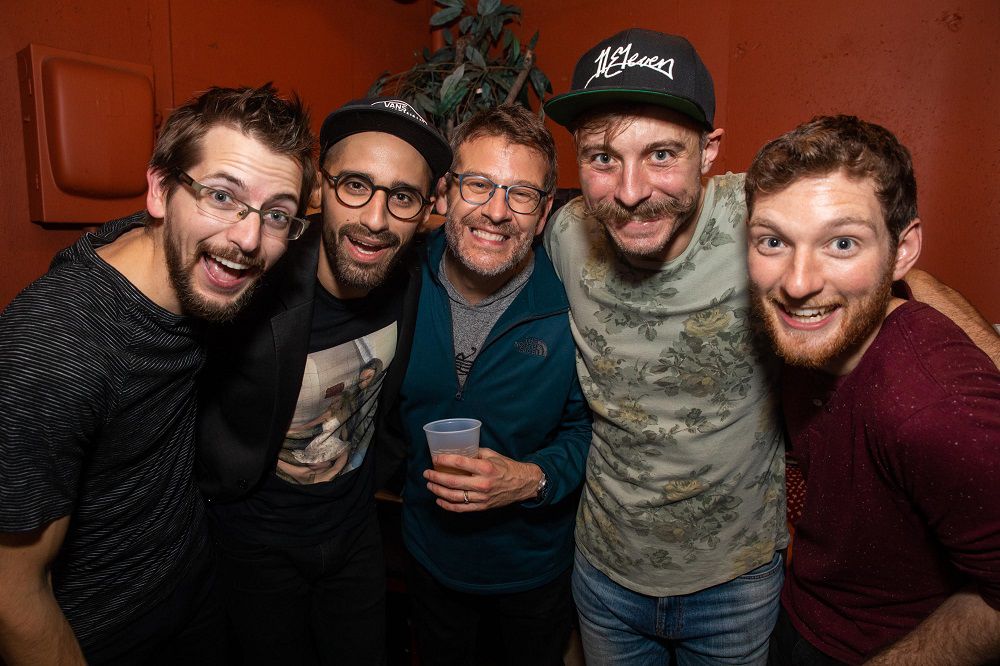 On this night, which I'll assume was a blustery one,  I had a gig at Broadway Joe’s on Main Street. I knew my band was sharing a bill with Monkey Wrench, the Buffalo punk outfit known for playing loud, fast, booze-soaked shows. What I didn’t realize until I arrived was that a third band was also on the roster. It was called moe., and my good friend Kim, who would become my wife much later, knew two of the guys from art classes at the University at Buffalo.

I threw my gear in the corner adjacent to the stage, grabbed a beer, and talked to a few friends while moe. was setting up. The band’s opening tune is lost to me in the folds of time by this point, but I do remember them playing a song I’d later know as “Spine of a Dog,” though at the time I heard it simply as a spirited cross between Ween’s goofiness and a mildly tropical groove with some intriguing ensemble playing.

They played for a little over an hour. “These guys are pretty cool,” I recall thinking.

Fast forward to 2019, and that “pretty cool” band is considered one of the most enduring and influential jam bands to have emerged from that early '90s milieu. It is about to kick off its 30th anniversary tour with a three-night run of what will likely be sold-out shows at the Town Ballroom.

As the band returns to Buffalo for these shows, it's also preparing to go back into the studio to record new music for the first time in more than five years. moe.'s Snoe.Down Festival is returning in 2020, after a seven-year layoff. Most significantly, bassist and vocalist Rob Derhak has been declared cancer-free, following a 2017 oropharyngeal cancer diagnosis that forced the band to declare an indefinite hiatus while Derhak underwent treatment.

Already, moe.'s 30th year is shaping up to be its biggest yet. The band has come a long way from Broadway Joe’s.

So why did moe. succeed where so many others failed? How did the band make it from a tiny club frequented by UB students to multiple nights at the Town Ballroom, to say nothing of the countless festival stages, concert halls and theaters across the country where the band routinely commands multiple-night stands and full houses?

Every moe. fan has a theory. I asked a few for theirs.

“After Jerry Garcia (Grateful Dead) died, most everyone I knew jumped onto the Phish train,” said Jennifer Martino of Buffalo, a hardcore moe. fan who has seen the band some 150 times. “But I jumped into our local music scene, because by that point, we had a bunch of choices when it came to Dead tribute bands in town. moe. was opening up for one of those bands."

Her first recollection of seeing moe. was in an opening slot for the Buffalo Grateful Dead tribute band Sonic Garden at the former Bourbon Street on Forest Avenue.

“What was missing from Phish that moe. had was feel-good, happy music. Silly songs and a nothing-but-love vibe. 150 shows later, I can see that moe. picked up where the Grateful Dead left off for me -- uplifting songs, without the tinge of heavy drug abuse coming through, the way it did with a lot of the other jam bands at that time.”

That upbeat, family vibe Martino speaks of was also apparent to Michelle Welch Cormier of Buffalo who, after relocating to Pittsburgh, returned in the late 90s to find a considerable buzz about the band here in town.

“Back in the mid-90s, I was into the Grateful Dead, Phish, Allman Brothers and Blues Traveler pretty heavily,” she said. "I first saw moe. in 1997 at a Furthur Festival, but I only have faint memories. It was later that I started getting really into them. In 2004, they played the Riviera Theatre and I went to the show alone. The vibe and the energy are what brought me back for more. They always seemed to get better each time I saw them. I’ve now seen around 35 shows.”

For Cormier, an early love for the community surrounding the Grateful Dead set her in good stead to fully embrace the moe. family, a community of devout fans willing to travel hundreds of miles to see the band.

“They’ve created a sense of community and family that is unmatched in any other fan base I've been a part of,” she insisted.

Jennifer Brazil of the Borderland Music + Arts Festival first encountered the band when she was working in the music industry in San Francisco.

"Being able to see moe. headline at the legendary Fillmore in San Francisco was epic for me," Brazil said. "A jam-band hippie girl from Buffalo having a band from my hometown at the Fillmore - what a dream come true."

Brazil remains impressed with moe.'s ability to break into a music industry that has rarely taken artists emerging from Buffalo seriously.

"At the time they were scrapping their way into the jam-band scene, it was all still grassroots, word-of-mouth, tape trading, contingent on extreme fan loyalty. To build a fan base being from Buffalo without the internet, streaming, YouTube videos, etc. ... that was really hard. They had to be committed to constant touring. moe. built this base that surfed the waves with them over the years. They predicted the market and created opportunity for their community by hosting their own festivals in niche markets -  Snoe.Down. and Moe.Down - and they were one of the first bands to partner with the craft beer world, via Saranac. They really have been groundbreaking."

Mike Gantzer of the Buffalo band Aqueous discovered moe. when he was only 17.

“Being a young, impressionable, no-name band fresh out of high school, the fact they were from Buffalo meant everything to us, and they were blending genres and improvising in ways we’d never heard before," Gantzer said. "I was immediately struck by the fact that they had amazing songs, in ways that many other bands in the scene didn’t. They were heartfelt, concise, experimental,and well-produced.”

Aqueous has since grown into its own generation’s version of moe., employing and interpreting the older group’s playful-but-disciplined approach to songwriting and performing as it followed a similar path from Buffalo’s smallest bars to some of the most sought-after stages on the national jam-band and festival scene.

“No other band has influenced Aqueous as much as moe. did,” Gantzer said. “After we saw them play in Lafayette Square in the summer of '07, the way we thought about music, live shows and improvisation changed. The way Chuck (Garvey) and Al (Schnier) worked as a team on guitar has everything to do with how (Aqueous guitarist/keyboardist) Dave (Loss) and I work out our dual guitar approach to this day.”

Over time, that admiration has grown to be mutual. moe. gave Aqueous its first major festival date when it invited the band to perform at its 2012 Moe.Down Fest, held on the grounds of Snow Ridge Ski Resort in Turin, N.Y. Members of the band have attended Aqueous shows, sat in on many occasions, and even formed one-off festival projects, such as the all-star Pink Floyd tribute featuring members of moe., Aqueous and Dopapod, at the 2018 Night Lights Music Festival.

“The guys in moe. are every bit as ‘Buffalo’ as you would imagine or hope they’d be. It’s always a perk when your heroes turn out to be nice guys, too, you know?” Gantzer said.

Nice guys who end up finishing first? That's a rare occurrence, particularly in the music business. But the integrity exhibited by the band members seems to have made it so.

"They persevered through health issues and industry changes and they keep coming back to that core base," Brazil said. "Their respect is well-earned because they've stayed true to who they are and where they're from, and to their authentic sound.

"They're the very definition of Buffalo, because they keep it real."

Watch now: Be part of the art when 'Beyond van Gogh' visits Buffalo

Among fans and musicians, a divided view on vaccination passports

Hear thoughts from people in the live music industry on Covid-19 vaccines and whether they should be required for fans to attend shows.

Moe. is coming home to kick off its 30th anniversary tour with three shows in Buffalo. Chuck Garvey, left, Rob Derhak and Al Schnier, perform at the Town Ballroom in 2013. (News file photo)