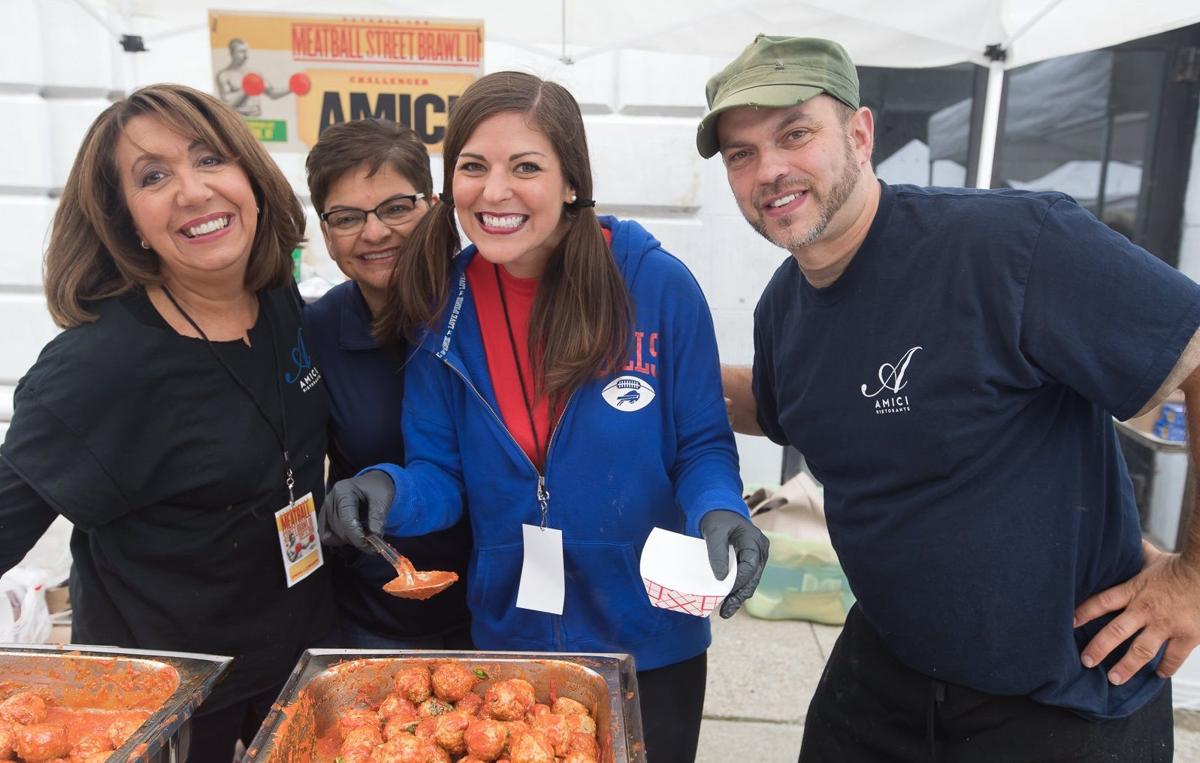 Celebrate the versatility of the meatball on Sunday at the Meatball Street Brawl outside Osteria 166. (Matt Weinberg/Special to The News) 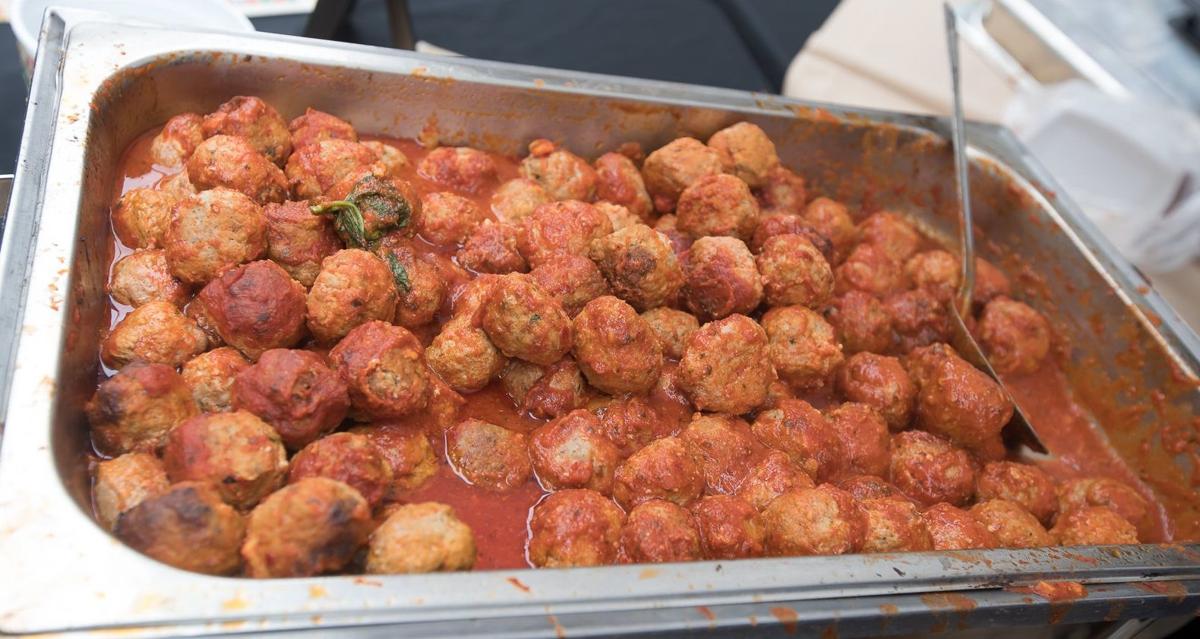 Classic meatballs from the 2018 Meatball Street Brawl. (Matt Weinberg/Special to The News)

Nothing is exact anymore. The Buffalo-area's Oktoberfests begin in the middle of September and Buffalo Beer Week is actually 10 days long. It reminds us of the time when Positively Main Street was on Elmwood Avenue.

As amusingly misleading as these titles may be, a bounty of quality events lies ahead for the weekend of Sept. 13-15. The Meatball Street Brawl, one of the most enjoyable locally run festivals I've attended, enters its fourth year on Sunday, while Southtowns East Aurora and Hamburg both present community festivals.

Toss in chalk and bubbles, and you've got a wacky weekend of enjoyment.

The 20 competitors selected for the fourth edition of the Meatball Street Brawl will compete for two title belts this year: Best Classic Meatball and Best Freestyle (previously, the belt was given only to the classic victor).

Misuta Chow's and Hooked, which just got Andrew Galarneau's review treatment today, are among the intriguing newcomers; check out last year's winners, all of whom return for another taste of Sunday sauce success. Seven breweries will be on hand, too, for those made thirsty by meatballs.

With the goal of highlighting authentic German culture in the Buffalo area, Hamburg Oktoberfest is just what it sounds like: a full day devoted to German music (the Frankfurters and the Auslanders), food led by Schnitzel & Co., and local beer from Hamburg and Genesee breweries (and Spaten). The Oktoberfest organizers will even run their own stand selling Bavarian pretzels.

Love feats of strength? Consider the forearm-testing stein-holding competition, which costs $10 to participate, but awards whomever can hold a 1-liter stein, filled with beer, for the longest time. The prize totals $250 in value.

Waltz around Memorial Park for cultural appreciation; peruse Smiles from 2016 for a sense of the festival.

It's tough to fathom that 38 craft breweries now serve their own beer in the Buffalo area. Many readers have asked when the bubble will burst, when the first brewery will shut its doors, especially in light of a recent trend of Millennials pulling away from drinking (get used to the phrase "sober curious"). But national trends typically take a while to reach Buffalo, so the breweries should be safe, for now.

Industry shifts shouldn't be an indictment on the small businesses that have introduced quality beer in a wealth of styles, boosted the local economy and created several new cool hangout spots in and around the city.

For Beer Week, the kickoff is a gala at Flying Bison, from 5 to 9 p.m. Friday, and News contributor Dan Almasi lists other strong events slated for the next 10 days. The notion that most brewery owners in the Buffalo community actually get along and collaborate is more than fluff.

Taste of East Aurora, 11 a.m. to 5 p.m. Saturday, Sept. 14 on Main Street, between Riley and Olean, in East Aurora. Free to attend, but the food costs money.

Welcome five new vendors to the Taste of East Aurora, the Greater East Aurora Chamber of Commerce production that was robust even before these additions. The Irishman, Yeah Pierogi, the Deli, Charlie's Diner and Byrncliff all join the fray, which is laid out in a handy map, accompanied by the full food menu.

[Guide: How to spend an afternoon in East Aurora]

Chalkfest is proof the simplest events can be a blast. Grab colored chalk and find a willing venue - especially one, like RiverWorks, that's a massive, post-industrial canvas - and let creative inspiration run free.

Popular sites for chalk art in the past have been inside the GLF grain silo - designated as the site for a future entertainment complex - and the landing wall for RiverWorks' zip-line course, featuring Brewce the giant shark, a painting by Pearl Street arts director Zach Case.

Registered artists, roughly 200 in number, will be assigned specific areas to draw, but there will be ample opportunity for unregistered spectators, too, in the beer garden and by the zip lines. Eighty vendors will be on hand, too, if everything you draw looks like an indistinguishable blob.

BubbleFest After Hours, 6 to 9 p.m. Friday, Sept. 13; and BubbleFest, 10 a.m. to 4 p.m. Saturday, Sept. 14, both at the Buffalo Museum of Science (1020 Humboldt Parkway). Cost is $16 for the adults event, or $10-$15 for the family-friendly event Saturday (with options, which include a BubbleMania performance, from $15-$20). Members receive a discount for the adults event and free entry, with registration, for the family one.

The Science Museum has diversified its programming to better accommodate both adults and their entire families, kicking off a theme with a 21+ "After Hours" event Friday night, followed by a kid-friendly festival the next day.

The offerings are popping for adults: bubbles both gigantic and frozen, make-your-own bath bombs ($5 additional) and bubbly beverages. For kids, BubbleMania - the Casey Carle production that's adopted seamlessly by Doug Rougeux - exposes kids to giant bubbles 25 feet in length and bubbles that bounce, with a side gentle humor, while other demonstrations involve the science of popping bubbles and bubble sculpture.

Note the new location for this returning festival: it's a short move to the corner of 3rd and Old Falls, where a full lineup of blues is on the docket for the 12th edition. The free event proudly continues the rich jazz history of Western New York, with a regular tribute to Muddy Waters.

The Nighthawks with Bob Margolin cap Friday night after a special presentation for Niagara Falls mayor Paul Dyster, then Canned Heat tackles the late spot Saturday (not to be confused with Mississippi Heat, which performs from 5:30 to 7 p.m. the same night).

"Mayberry," "Bless the Broken Road" and "What Hurts the Most" are probably in the collective repertoire of the casual music fan, an impressive achievement for a Columbus, Ohio country trio celebrating its 20th anniversary. The group played the Buffalo-area nearly every single year from 2005 through 2017, but Friday's show is the first since the Taste of Country in the last year of that span.

Presented as an "old-fashioned street festival," the area surrounding Corpus Christi Church in Polonia will transform into a Polish wonderland, with a '50s-themed party on Friday, featuring live music by Terry Buchwald, the Elvis Impersonator; performances by polka pros Polish Pride, New Direction and Special Delivery on Saturday; and then a four-hour set by New Direction again on Sunday.

A giant collection of artists and vendors, based primarily out of the Northeast, will converge on Orchard Park Middle School all weekend for a free show. Here's a PDF with all of the vendors' names and locations, and browse John Hickey's photos from last year's event.

5 more quick hitters for this weekend

Judah the Lion in Rapids Theatre

Already sold out for next week: Dining in the Dark at Hyatt Regency.

Area venues and cultural institutions consider the application process for federal relief – and technical hiccups – more than worth the aggravation.

"Hand to God," which was among the plays abruptly shut down at the start of the Covid-19 pandemic, will return to open the season from Nov. 4 to Dec. 12.

Celebrate the versatility of the meatball on Sunday at the Meatball Street Brawl outside Osteria 166. (Matt Weinberg/Special to The News)

Classic meatballs from the 2018 Meatball Street Brawl. (Matt Weinberg/Special to The News)