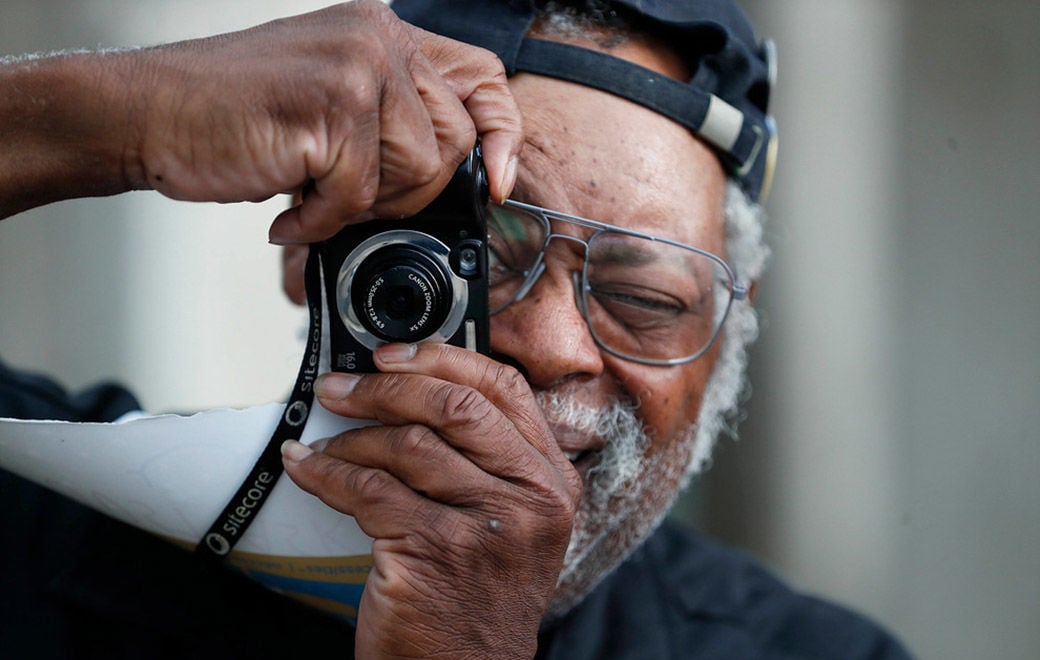 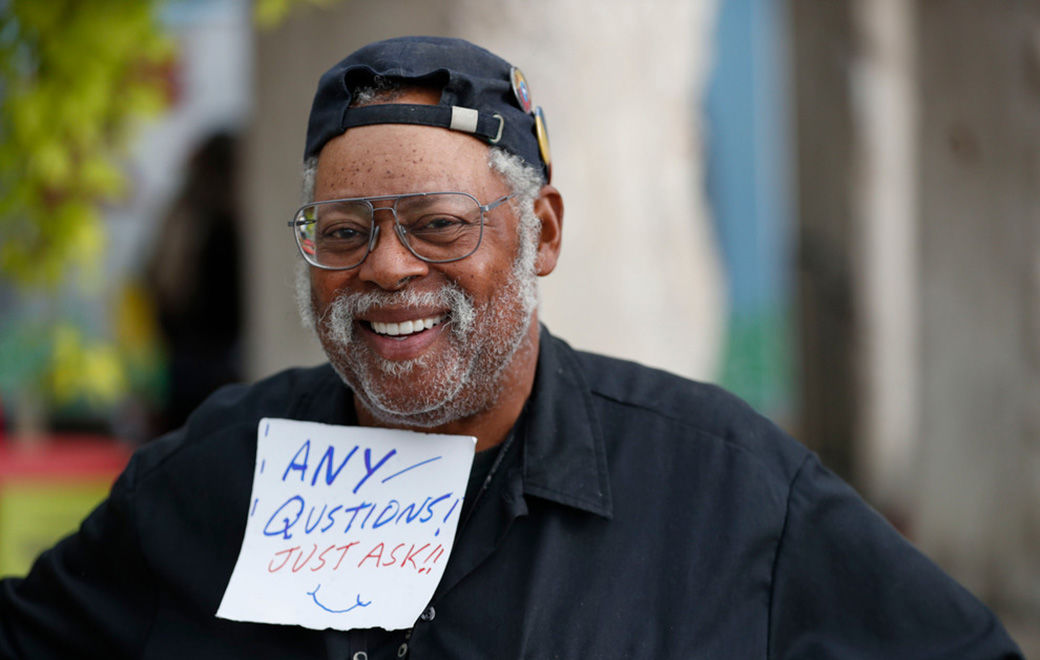 Kenn Morgan was was ready to answer all photo questions at the 2019 Music Is Art Festival. (Sharon Cantillon/News file photo) 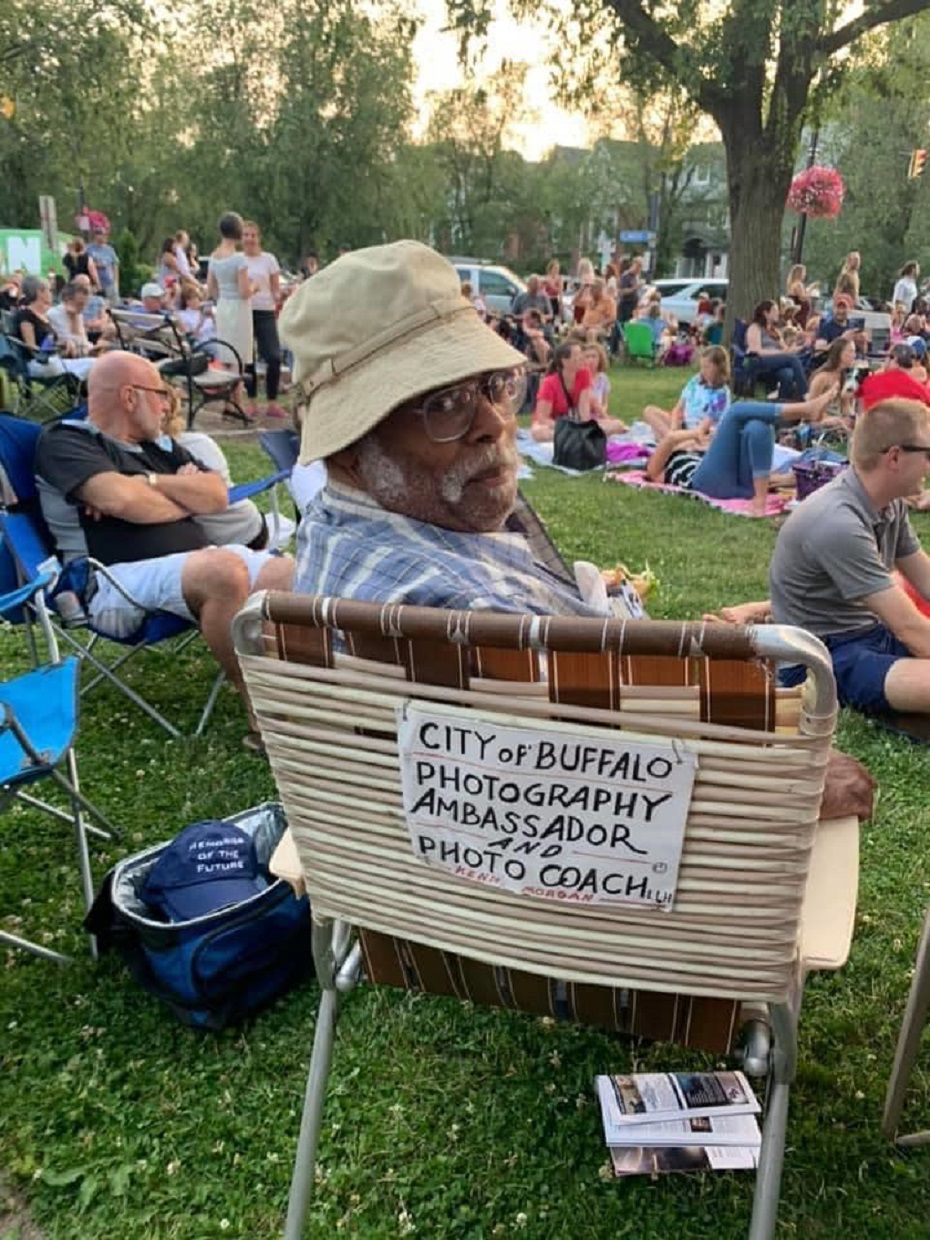 Kenn Morgan, pictured at an event on Bidwell Parkway in 2019. (Photo courtesy of Dave Corbett)

Kenn Morgan, the beloved Buffalo photographer, educator, podcaster, radio host and mentor, died in his sleep on June 1, after suffering a heart attack. Though he might not have been a household name, members of the photography and fine arts communities knew Morgan as a deeply talented photographer, a serious supporter of the local scene and a fan of other artists in the community.

Many remember fondly Morgan’s impact on their lives and artistry through his classes on black and white film photography at Locust Street Art, where he began teaching in 1987.

Born and raised on Buffalo’s East Side, Morgan taught himself photography from a young age, but he was a serious autodidact, one who studied, learned and often seemed to have memorized the detailed history of photography.

A devout believer in the merits of pre-digital black and white film photography, Morgan – a Burchfield Penney Art Center Legacy Artist – was a documentarian who believed that the poetry in photography was to be found solely in the synergy between photographer and subject, and not technological advancements.

“The best photographs are simple, with elements of beauty or drama – or both,” Morgan told Artvoice in 2002, and his work backs up such a statement.

Those who studied with Morgan, worked alongside him, met him at one of the countless art openings he religiously attended and invariably documented, heard him on the radio or on a podcast, or hung out with him while he drank a beer and cooked some serious barbecue, recall him as a kind, humorous, deeply intelligent and enthused friend, a perpetual student of life and photography in equal measure.

“Kenn was what you would call a Renaissance man,” said Buffalo artist, educator and longtime friend Eric Evinczik. “He was an artist, a teacher, an educator and a philosopher. And he supported the arts like no other person in Buffalo. You could always see Kenn at any art show any time of the year, supporting local and out of town artists. He was genuinely interested in what artists had to say and do.”

Morgan also acted as a conduit between the sometimes-cloistered world of fine art and the broader public.

“His gift of gab was beyond that of mere mortal men,” Evinczik said. “He had multiple podcasts on Think Twice Radio, among them 'The Burnham & Dodge Art Hour.' You could get a glimpse there into how his active mind worked. He could string 20 ideas together and relate them all to his life experiences.”

That ability to tie together dizzying narrative in an inspiring way, all in real time, made Morgan a highly impactful educator.

“My dad was a thoughtful, funny and kind,” said his daughter, Monaca Morgan. “He would tell you if something could be better by giving you pointers. He wanted people to excel, to go from one level to the next level. He didn’t like the use of new technology – he was old-school in many ways.

“But sometimes old-school is the best way.”

Longtime friend, former student and photographer Barbara Lynch-Johnt called him a conceptual artist who pushed boundaries. "He wasn't satisfied to capture a good photo, unless there was a great idea – a theme – behind it. He was captivating, quirky, wildly intelligent and ever-present. He made it to every art opening. To all the festivals. He hosted many events himself.

“People gravitated toward him – young and old, rich and poor. He was an instant source of entertainment, inspiration and friendship. He was larger than life. The Lance Diamond of the photography circle in Buffalo, a legend. The arts community will never be the same without him.”

His friend and fellow photographer, Queen City Gallery owner Michael Mulley, wrote this in a remembrance published by Buffalo Rising: “Long after the great art-industrial complex has crumbled and the gatekeepers run from their hallowed halls, there will still be a photography student that remembers Mr. Morgan.”

Hallwalls Executive Director Ed Cardoni shared a quote about Morgan from a tribute that will run in an issue of the art magazine Cornelia.

“And when we can finally reopen our gallery, all the galleries, we will not see him there. We will never see him again. But we will feel his absence, and we will remember him.

“And then there are all the people he taught how to take and make pictures. And then, of course, all of his pictures.”

Buffalo Bills Twitter tonight ran through a flurry of emotions – especially in the fourth quarter – during the Bills' 26-17 loss to the Kansas City Chiefs.

Irish Classical's 'Sea Marks' gives you the feeling of being there

Viewed at home or with friends, it makes for comfortable escapist theater for these uncomfortable times.

The production values of BPO OnDemand yield an experience that is just as engrossing as a live evening of music.

Buffalo Bills Twitter tonight ran through a flurry of emotions – especially in the fourth quarter – during the Bills' 26-17 loss to the Kansas City Chiefs.

Shea's will remain closed through March

Shea's has been dark since March when it closed after two performances of "Hello, Dolly!" because of Covid-19.

Kenn Morgan was was ready to answer all photo questions at the 2019 Music Is Art Festival. (Sharon Cantillon/News file photo)

Kenn Morgan, pictured at an event on Bidwell Parkway in 2019. (Photo courtesy of Dave Corbett)