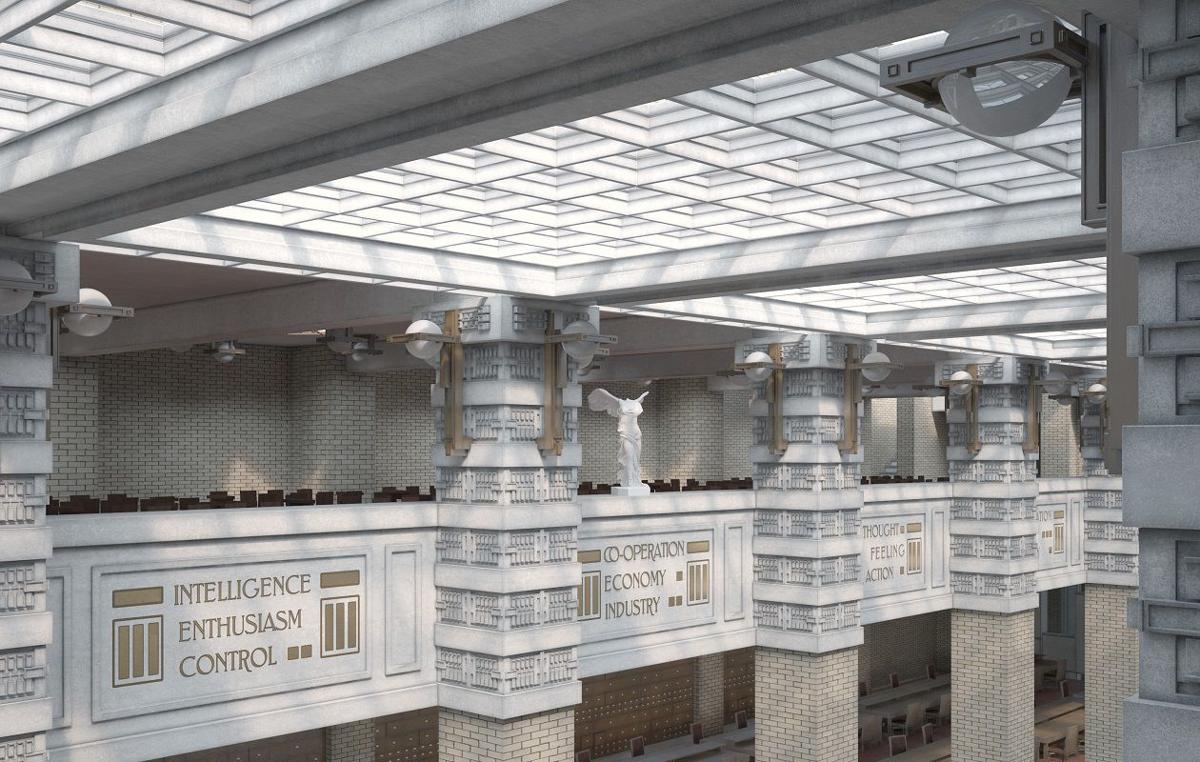 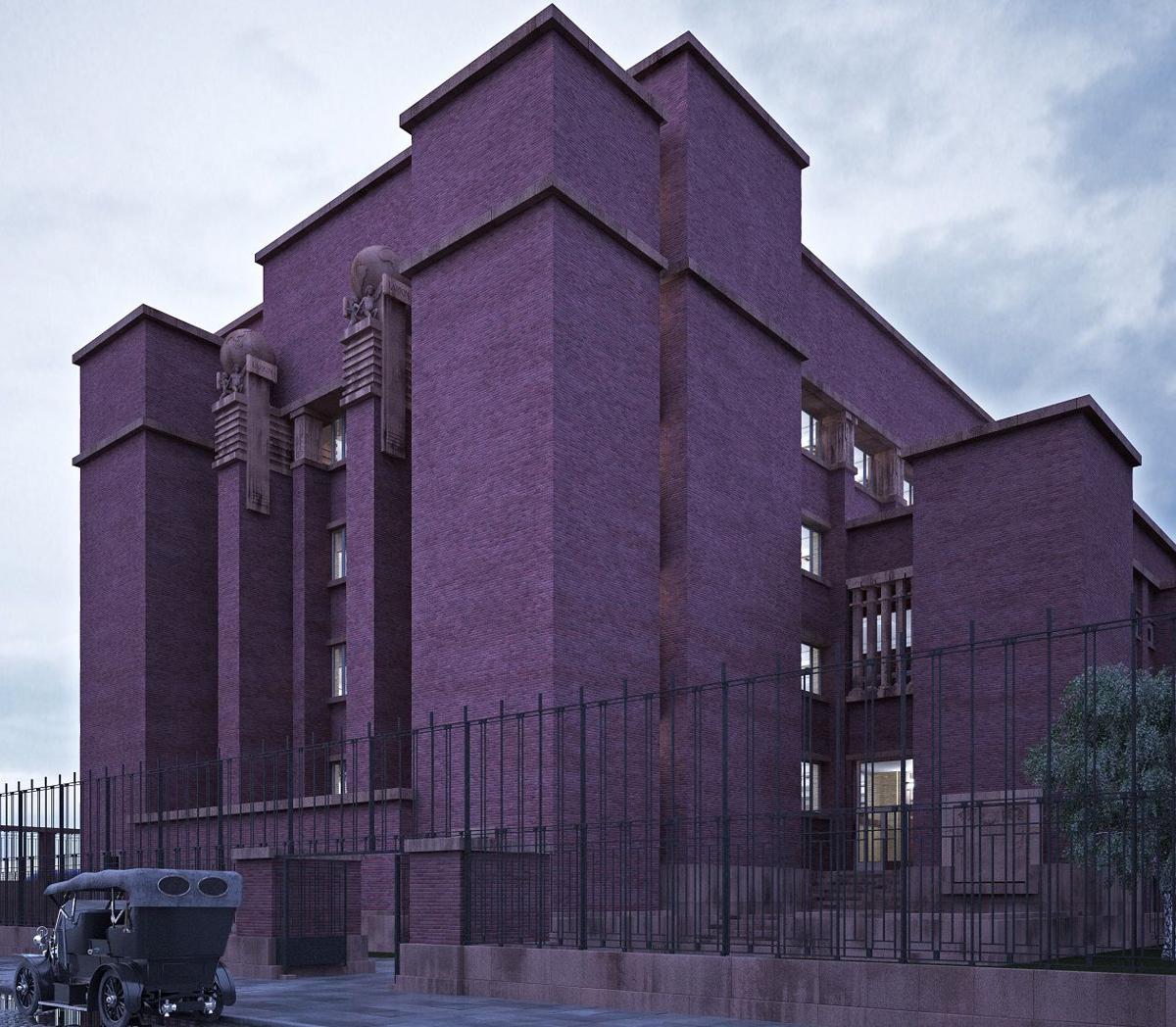 The Larkin Administration Building has an exalted status among Frank Lloyd Wright aficionados, Buffalo's architectural mavens and modern architecture itself.

Wright's first major commercial commission offered a commanding brick-clad steel exterior with a radically designed, 76-foot-tall light court, surrounded by a grid of inward-facing balconies adorned with globes and figural sculptures inside and out by Wright collaborator Richard Bock, as well as inscriptions promoting the virtue of labor.

The 6 1/2-story-tall building, built in 1906 at 680 Seneca St., was also one of Wright's greatest tragedies. The building was altered in later years in ways that betrayed Wright's design, and was torn down in 1950 by a private company with the approval of the City of Buffalo, which had tried on several occasions to sell the building or consider other reuses. The wrecking ball occurred years after the Depression delivered a fatal blow to the Larkin Soap Company, the premium mail-order business that used the building as its headquarters.

Black-and-white photographs of the Larkin Administration Building continue to awe viewers, but that period of time that seems long ago and far away helps to keep them at arms-length. Now, through photo-realism techniques done with 3-D computer modeling, Spanish architect David Romero has cast a new light on the old images by bringing the building's red sandstone exterior, cream-colored brick walls and ornate details dreamily to life.

"Larkin is a key building in the history of architecture," Romero said in a recent phone interview from his home in Madrid. "It was a pioneer in many aspects of design and technology that have continued to be used since then, but it was also a very beautiful building. It was consistent with Wright's work, and formally broke with everything that had been done until then."

The new headquarters was intended to provide an ideal work environment for efficiency, productivity and cooperation among employees for a workforce that had 1,800 office workers at its peak.

Comforts included an early form of air conditioning and a lounge area with a fireplace. Wright was hired to design the building by John D. Larkin, one of the managers along with Elbert Hubbard, William Heath and Darwin Martin, who recommended Wright to Larkin.

Romero relied on photographs, historic documents and the knowledge of Wright experts to present the correct colors and materials. He had assumed the stone and brick elements were gray, for instance, rather than the reddish tones Wright used.

"Monochromatic buildings are not common in Wright's work on facades, and in a sense it is a risky decision," Romero said. "It's really beautiful to see the real colors, and as you can see in my renderings, the result of that combination is wonderful."

Bringing the past to life

Bringing color and added details to images from the past is nothing new, of course.

Peter Jackson restored archival combat film from World War I for his new film, "They Shall Not Grow Old." Jackson digitally restored the footage, adjusted the frame rate, colorized the film and then converted it to 3-D. The voices that serve to narrate the film came from hundreds of hours of BBC interviews recorded in the 1960s and '70s.

Jackson said context is key when adding color to images where it isn't present.

"At its worst, it's what Turner Classic movies does when it colorizes movies that were shot in black and white," Jackson said. "What's bad about that is a photographer shoots totally differently in black and white than they do for color.

"But if you take something originally in black and white and bring it into color, and do it in a way that's intelligent and manages not to kitsch it up, which is what Peter Jackson did, it can be  quite wonderful," he said.

Jackson approves of what Romero has done with the Larkin Administration Building.

"With something like the Larkin factory, it's not like they were shooting for a movie," he said. "They were informational photographs. If (Romero) is adding information that helps you see what's going on better, terrific. The point of those photographs was not the photograph as a photograph, but to show you what that place looked like.

"This gives us the opportunity to look at a destroyed building as we might have been able to look at it using current technology," Jackson said. "I don't see him betraying the object. It's interesting work, and is perfectly reasonable in large part because he's honest in telling us what he is doing."

Should it be rebuilt?

Romero said that while many consider it sacrilegious to tinker with Wright's work, the reception he's received has been overwhelmingly positive.

"The real recreation of buildings of the past is a controversial debate that in general raises many suspicions and conflicting positions, both among fans and from the academic world," Romero said. "But, curiously, reactions to my recreations have been extremely positive."

Romero goes further by stepping into that "controversial debate" by saying he would like to see Wright's commercial masterpiece rebuilt.

"I am in favor of the physical recreation of the Larkin Administration Building, a building whose historical and artistic value is beyond doubt," Romero said. "But I also understand the risks: the lack of information, or having to deal with current regulations that did not exist at the time, not to mention the high cost."

Recreating Wright projects have their proponents, but the whole notion of doing so is slammed by others, since the projects are usually proposed at a different site than Wright intended them for, require in many cases different materials and because of the mercurial architect's penchant for changing plans up to the last minute.

Such controversies occurred locally with the Fontana Boathouse, adapted from Wright plans and used by the West Side Rowing Club, and the Blue Sky Mausoleum at Forest Lawn, though less so with the Frank Lloyd Wright Filling Station, possibly because it is housed as an artifact within the Buffalo Transportation Pierce-Arrow Museum.

For now, it's a moot point anyway: While there are those who hold onto the dream of seeing the Larkin Administration Building rebuilt, there are no organized efforts to do so.

Simplicity is the order of the day in a show that seeks to present a lovingly curated roster of great country tunes without frills or gimmicks, Anthony Chase says.

"MusicalFare has opened a fun, playful and even mischievous production of 'Camelot,' " writes Anthony Chase.

"White Rabbit Red Rabbit" features a different actor each night who reads the play for the first time, with no preparation, in front of a live audience.

For the first time in forever, live theater returns to Shea's with 'Frozen'

Almost 18 months after Shea's closed its doors, "Frozen" will open there before an audience of 3,019 masked people.

At 'Beyond Van Gogh,' a multimedia experience takes viewers inside the art

“Beyond Van Gogh” could be described as graceful, gentle and relaxing.