The relief was palpable Wednesday night as MusicalFare Theatre opened its 2022-23 season with a spirited production of “Nice Work If You Can Get It.” After a one-week postponement and 10 days apart due to those dreaded double-red lines, it was clear this talented (and large) ensemble was more than ready to get back on stage and kick up their heels.

It was a kick for the audience, too.

Romantic entanglements abound, with leads Marc Sacco and Renee Landrigan caught in the main mix-up of the night.

Sacco fits smoothly into the role of hapless hero Jimmy Winter, a la Cary Grant except with a better singing voice, while Landrigan plays spunky bootlegger Billie Bendix with a snap worthy of Carole Lombard.

Her rendition of “Someone to Watch Over Me” while noodling with a prop that makes it clear she can watch over herself just fine, is a highlight. It makes her vulnerability in “But Not for Me” even more touching later in the show.

The plot that squeezes in among the two dozen musical numbers and a multitude of comic riffs involves 400 cases of bootleg booze that Billie has hidden in Winter’s beachfront cottage, thinking it is vacant. Of course this is when Winter decides to come for a stay, along with his flaky fiancée, the “Delischious” Emily Yancey, and her stern senatorial father, played with pompous bluster by Jon May.

Fortunately Billie’s accomplice Cookie McGee (John Kaczorowski) already donned the butler’s togs just in case the cops showed up, and he takes to the job like a tank to water. (Wherever Kaczorowski went to “wise guy school,” he must have graduated with honors!)

However, the formidable temperance crusader Duchess Estonia Dulworth (Charmagne Chi) has the gang in her sights, and, along with her Vice Squad (Lucas DeNies, Michael Kelleher and Josh Wilde) she is closing in.

Season preview: MusicalFare Theatre celebrates songs from Gershwin to Aretha and beyond

The first show of the 2022-23 season, “Nice Work If You Can Get It” (opening Sept. 14), is a hybrid of the old and new, and a regional premiere for MusicalFare.

Trust me: When Charmagne Chi begins closing in, you better buckle your seat belt. In Act 1, she owns the stage leading a rendition of “Demon Rum.” In Act II, she ups it to grand larceny, stealing the show with a master class in physical comedy while performing “Looking for a Boy.”

It’s a big moment, but this is a big show and it can handle it. Director Chris Kelly doesn’t waste a single actor in the cast (there’s 16 performers). Everyone has their moment: the Greek-chorus-girls who frame the action (Nicole Cimato, Kristen-Marie Lopez, Julia Murphy and Andrienne Ricchiazzi-Cummings); the bumbling gangster Duke (Preston Williams); and, in key supporting roles, local theater mainstays Bobby Cooke and Pamela Rose Mangus.

The rest of the production lives up to the casting: Kari Drozd went all-out providing each performer with multiple and sometimes dazzling 1920s-era costumes, accenting with wigs and makeup by Susan Drozd. All that fringe gets a workout during what the Duchess accurately refers to as “extremely precise choreography,” with credit there going to Kristy E. Cavanagh. Chris Cavanagh put together the multi-entrance/exit art deco stage that meant it only took second to switch out props (by Kevin Fahey) between scenes.

Let’s concede and then put aside the fact that the plot does not overflow in the logic department, and that the connections between action and song are sometimes tenuous. Everyone is having so much fun on the stage it cannot help but overflow to those in the seats. Really, it must be nice work. If you can get it.

"Nice Work If You Can Get It”

Watching the characters is like watching a cutthroat game of chess. With each move, the other must weigh the possible responses. 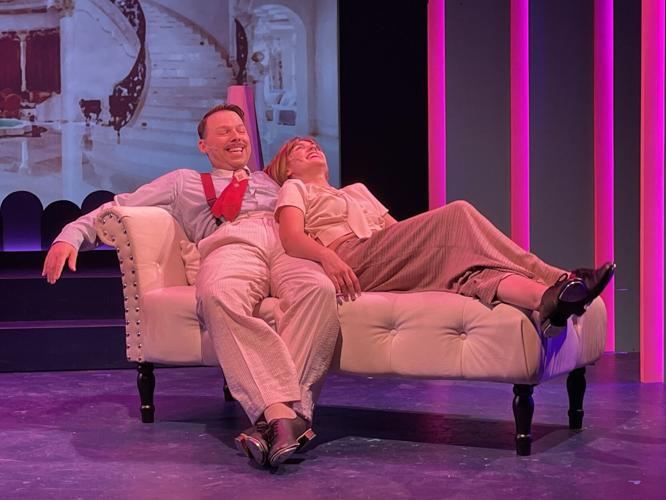 Mark Sacco and Renee Landrigan are caught up in romantic entanglements in MusicalFare Theatre's "Nice Work if You Can Get It," a throwback to screwball comedies of the 1930s. 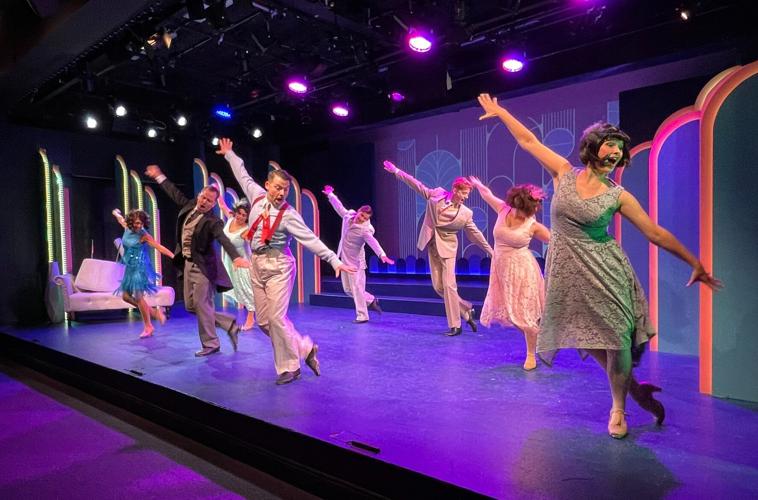 MusicalFare's "Nice Work If You Can Get It" makes great use of the talents of the large ensemble cast.