New on Hertel: A Mark Twain tribute from 'biggest mural artist in the world'
0 comments
Share this
Support this work for $1 a month
1 of 8 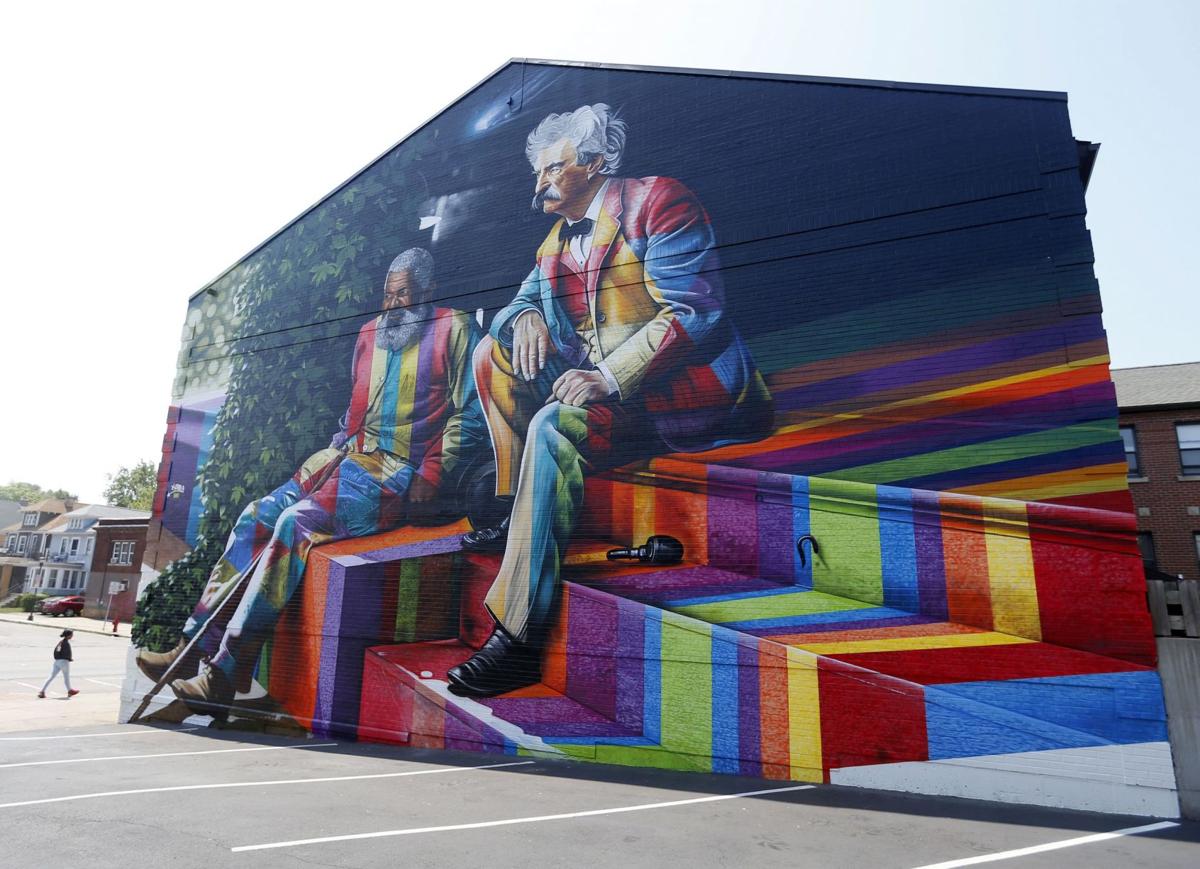 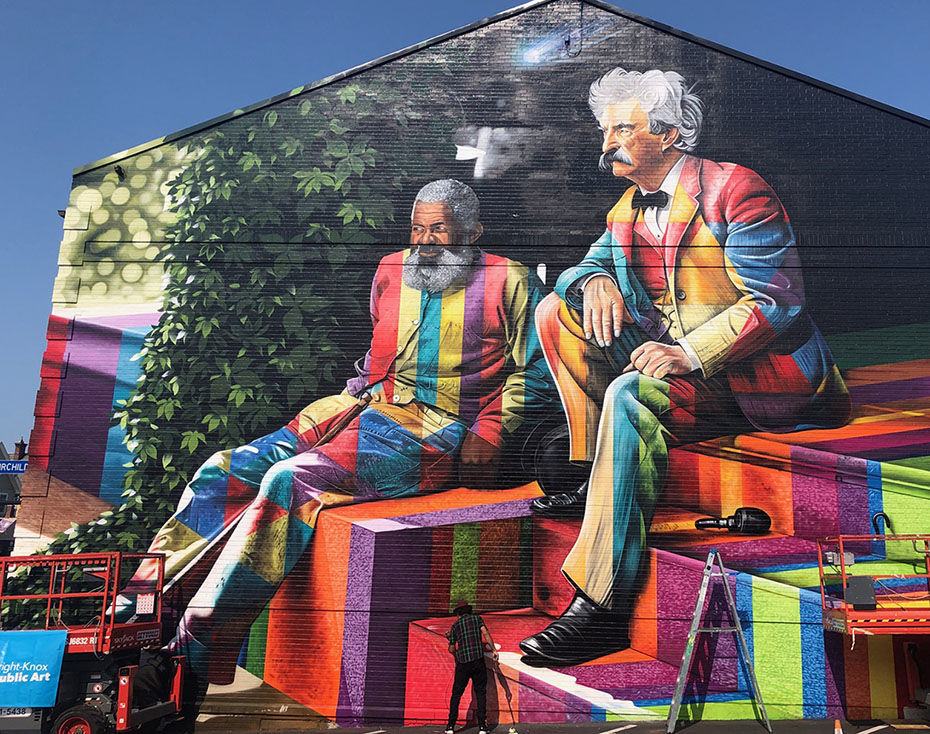 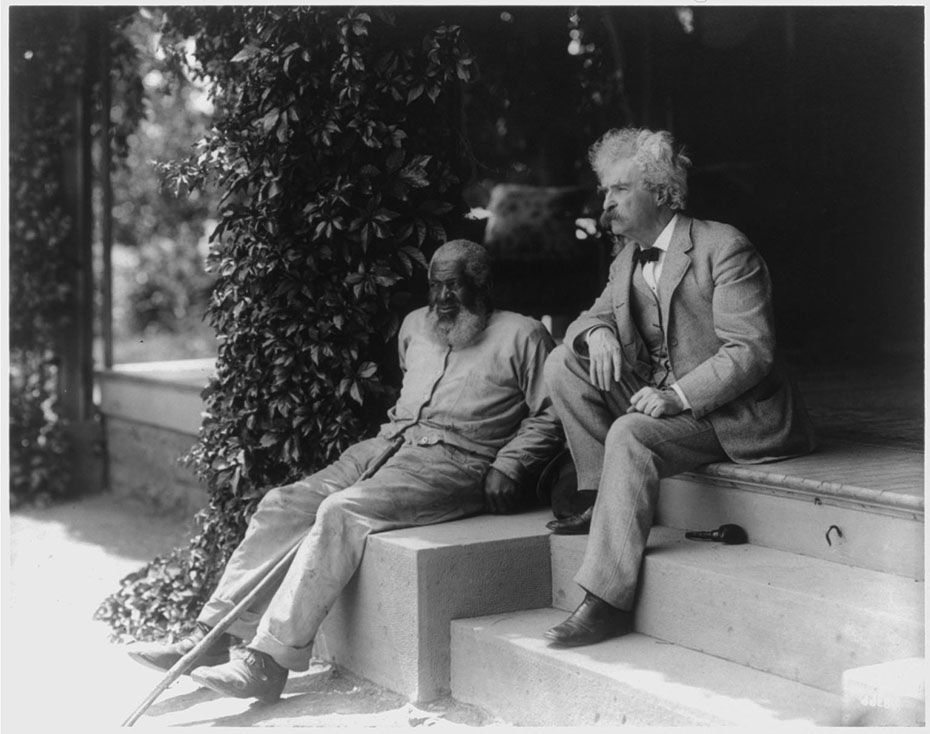 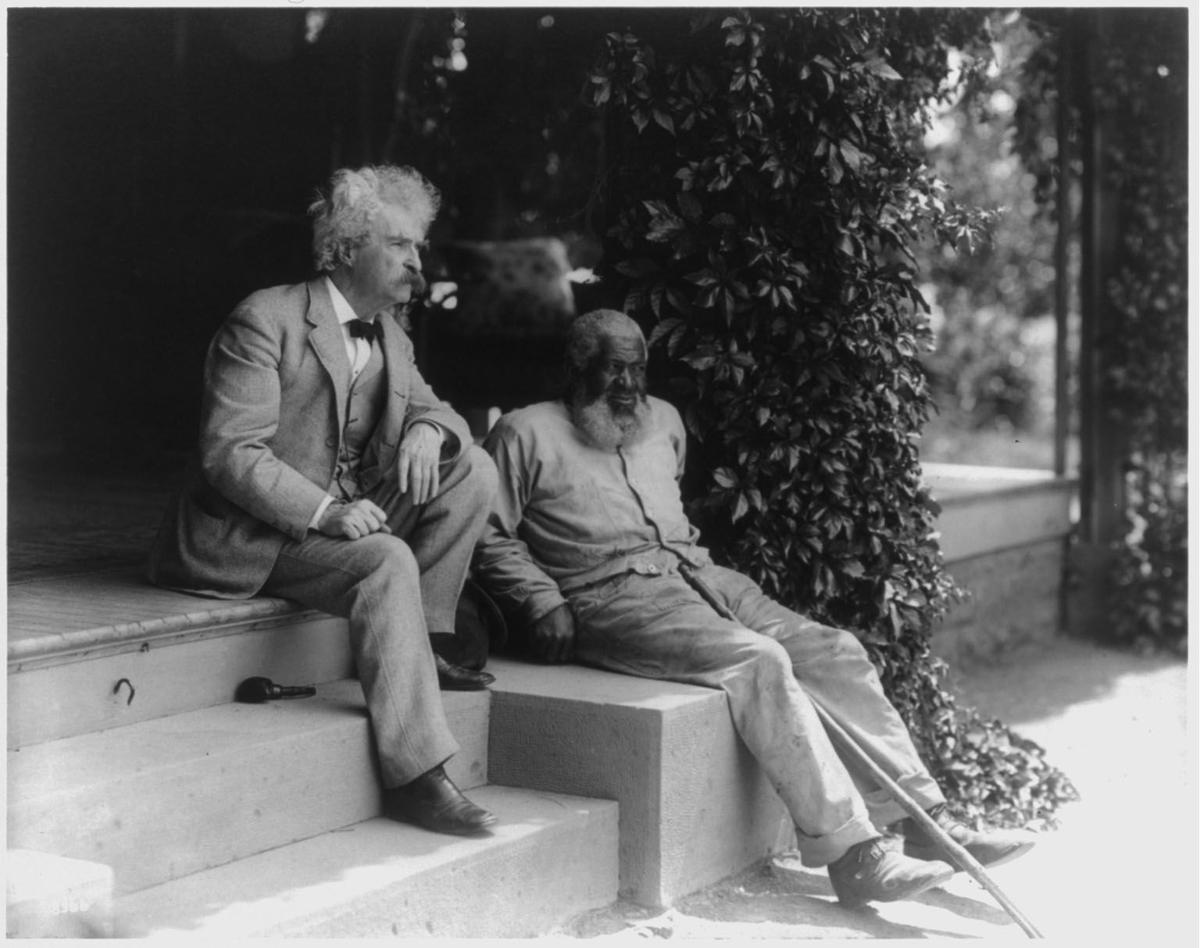 Mark Twain and his longtime friend John T. Lewis relax on the steps of a porch in Elmira. This photograph was the basis of a new mural featuring Twain and Lewis 1198 Hertel Ave. (Image via Library of Congress) 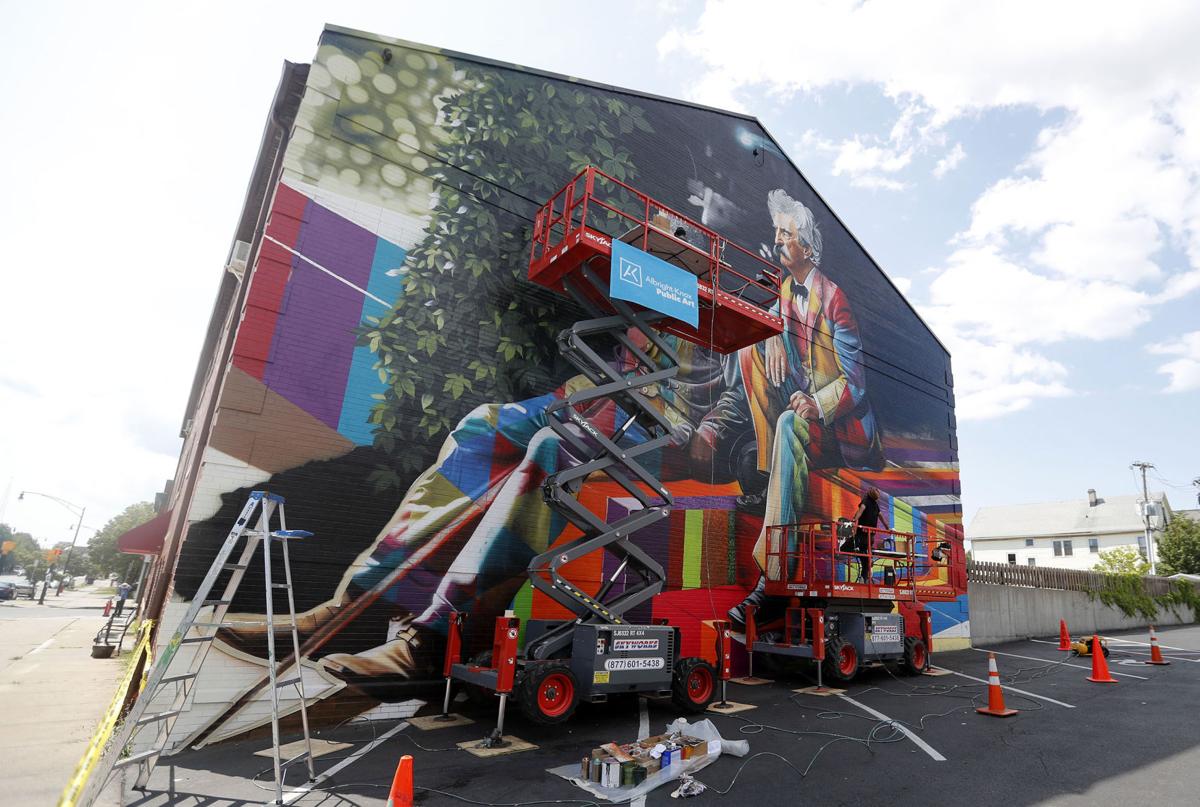 Brazilian Artist Eduardo Kobra, bottom right, works on a mural of Mark Twain and John T. Lewis on the side of 1188 Hertel Ave on Tuesday, July 23, 2019. (Mark Mulville/Buffalo News) 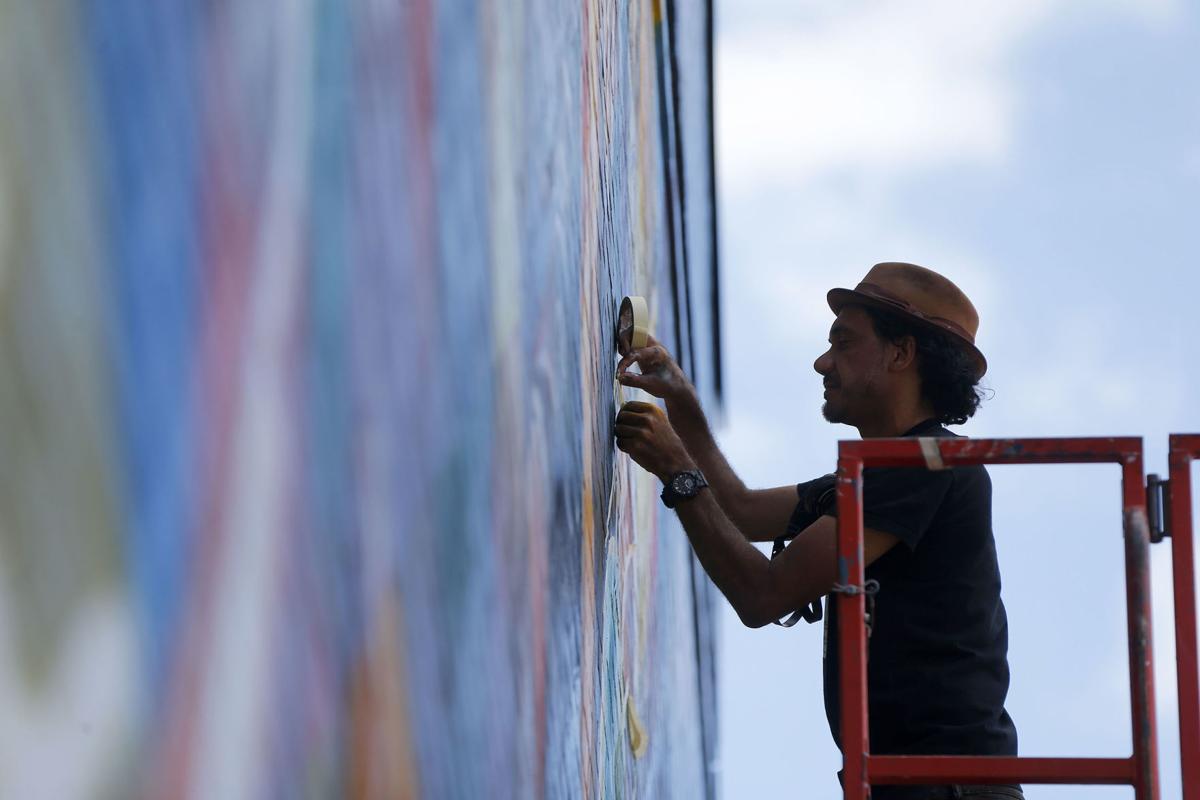 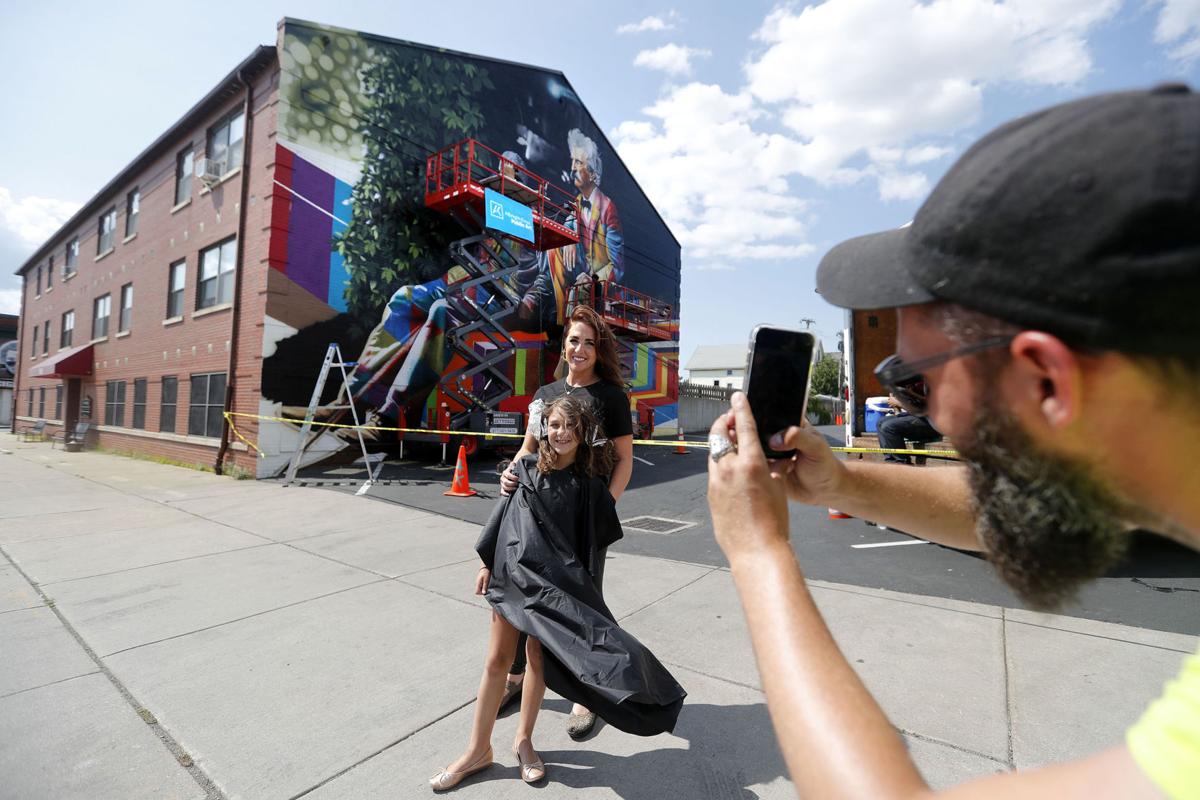 Fiona Hickey, left, and Jordan Pursel, center, has a picture taken by Zack Boehler as Brazilian Artist Eduardo Kobra works on a mural of Mark Twain and John Lewis on the side of 1188 Hertel Ave. on July 23, 2019. (Mark Mulville/Buffalo News) 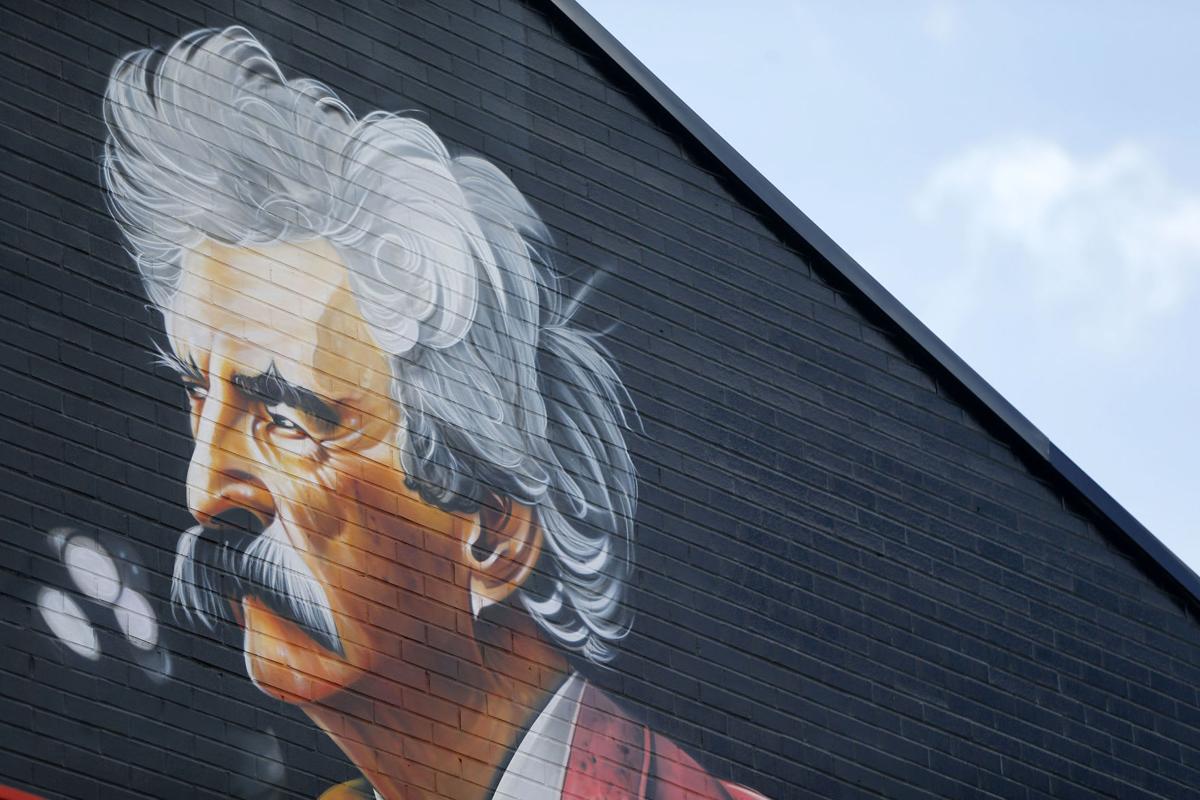 Brazilian Artist Eduardo Kobra works on a mural of Mark Twain and John Lewis on the side of 1188 Hertel Ave in Buffalo Tuesday, July 23, 2019. (Mark Mulville/Buffalo News)

In the grainy black-and-white photograph from 1903, Mark Twain sits on the steps of a vine-covered porch in Elmira, his white hair unkempt and his face paused in thought. Seated next to him is John T. Lewis, a poor pig farmer who was one of his closest friends.

The unlikely pair, who are buried near each other in Elmira’s Woodlawn Cemetery, has found new life in a mural bursting with kaleidoscopic color at 1188 Hertel Ave.

The piece is the work of self-taught Brazilian muralist Eduardo Kobra — to date the highest-profile street artist to contribute to Buffalo’s five-year-old public art renaissance.

It is also the ninth major mural on Hertel Avenue in two years, the flagship in a fleet of artworks designed to turn the North Buffalo neighborhood into a destination for cultural tourists.

“Four to five years ago there were no murals in Buffalo, and now we have the biggest mural artist in the entire world on Hertel Avenue,” said Delaware Council Member Joel Feroleto, slightly understating the number of murals in Buffalo before 2014. “Nobody would have expected that.”

The appearance of an artist with Kobra’s cachet — 828,000 Instagram followers, projects in more than 40 countries and a reputation for transforming bland neighborhood walls into bustling tourist destinations — could be the brightest spot yet in an increasingly crowded collage of public art projects across Western New York.

Working on two hydraulic lifts in the parking lot of Ristorante Lombardo, Kobra and his crew of two completed the ambitious mural in about a week, often working 11 or 12-hour days. The brick wall belongs to a senior housing complex operated by People, Inc. The mural was commissioned by Feroleto and coordinated by the Albright-Knox Art Gallery.

On a recent 75-degree Tuesday, as the mural neared completion, cars slowed to a crawl along Hertel and passengers leaned out windows to get a glimpse of the action. Neighborhood residents paused on their daily walks to ask questions about the mural, and Albright-Knox Public Art Projects Coordinator Eric Jones obliged with the same story:

During one of Twain’s frequent visits to Elmira, his sister-in-law, her daughter and another woman were preparing to take a carriage ride when their horse got spooked and set off without a coachman. John T. Lewis, a poor pig farmer from Maryland, intercepted the runaway carriage just before it reached the edge of a steep ravine, saving the lives of all on board.

For the rest of their lives, Twain and Lewis remain close friends. One theory has it that Jim, the runaway slave in “The Adventures of Huckleberry Finn,” was inspired in part by Lewis.

Kobra, who recently completed a buzzworthy series of 18 murals in New York City, said the piece is an attempt to fuse a striking historical image with a burning contemporary issue.

“I was looking for something with a connection to the city. I also wanted to raise a topic that is still very current, and that is the issue of racism,” Kobra said. “Even though many, many years have passed since this image of Mark Twain with his friend also in a certain way spoke to the issue of racism, which was very strong at that time. And, nowadays, we still live with this issue.”

In the piece, Twain and Lewis sit beneath a black sky streaked with a depiction of Halley's Comet, the appearance of which coincided with Mark Twain's birth and death.

"I began painting older images, images from the past, architecture, cities in the 1900s, 1920s, 1930s, with historic images," Kobra said. "And I began to do a re-reading of these images, you know? I began to treat them with color, treat them with another meaning, for the streets."

Though he is known for painting in bigger cities and has received 40 invitations so far this year, Kobra said he and his team decided to take the Buffalo mural commission because of the city’s proximity to New York, the presence of the Albright-Knox Art Gallery and the respect Feroleto, museum staffers and the community have shown for his work.

“For me, it doesn’t matter if a city is big, or if it’s small. For me, what’s important is the respect that a city has for my work,” he said. “The wall is really good, beautiful, very well-lit, I think the location is exceptional. For me, I think it’s a privilege as an artist to be able to be here.”

The piece, as yet untitled, had an unusual gestation. Unlike many projects in the Albright-Knox public art program, which often begin in the mind of a curator, this mural emerged from one politician's determination to bring a world-famous mural artist to Hertel.

About a year ago, Feroleto reached out to Kobra’s team to gauge its interest. Over the next several months, Feroleto’s office sent press articles about Buffalo’s public art scene, including one from the Washington Post that referenced the newly branded collection of North Buffalo murals known as “Hertel Walls” and a package of Buffalo-themed merchandise.

After Kobra’s team agreed to the commission and agreed to a contract, Feroleto and Albright-Knox Public Art Curator Aaron Ott started batting around ideas for the mural’s subject. Their list included Twain, along with a few unorthodox choices.

The team opted for a mural based on Twain, who lived in Buffalo for a short time and worked as editor of the Buffalo Express newspaper. The muralist and his team researched Twain for about a month, settling on the little-known relationship between Twain and John T. Lewis and a photograph of the pair in the collection of the Library of Congress.

Response to the mural so far has been overwhelmingly positive. On a recent morning, North Buffalo resident Susan Navolio and two friends paused to take in the scene. Navolio praised the profusion of murals on Hertel in recent years, from amateur efforts to internationally regarded pieces like Kobra's.

“This is wonderful, but I really am enjoying the homegrown murals too, the ones where people aren’t famous,” Navolio said. “I’ve been here about 12 years, and the transformation is astronomical. In the last four years, it’s been really fast.”

The Hertel Avenue mural renaissance, Feroleto said, is part of a strategy to saturate the strip with vibrant public artworks and help to rebrand it as a destination for cultural tourists. The transformation began with Bunnie Reiss’ three-wall mural on the exterior of Joe’s Deli at 1322 Hertel.

“Once we did the one on Hertel and Colvin at Joe’s Deli, a ton of people started contacting my office and the Albright-Knox — business owners, building owners — all saying they want public art, they want murals, they want to have these on their buildings,” Feroleto said. “The residents have embraced it and loved it so much. I’ve seen so many comments on social media or people emailing my office saying how happy they are to live in this neighborhood.”

As Feroleto was talking with a reporter on the Hertel sidewalk Wednesday, a North Buffalo resident interrupted to give a thumbs-up.

"Have you seen one that's nicer than that?" he said, gesturing toward the towering Twain and his friend hanging out beneath Halley's Comet. "It gets my vote."

This is a play for Jews and non-Jews alike. If you know, you know. If you don’t, you’ll learn.

Mark Twain and his longtime friend John T. Lewis relax on the steps of a porch in Elmira. This photograph was the basis of a new mural featuring Twain and Lewis 1198 Hertel Ave. (Image via Library of Congress)

Brazilian Artist Eduardo Kobra, bottom right, works on a mural of Mark Twain and John T. Lewis on the side of 1188 Hertel Ave on Tuesday, July 23, 2019. (Mark Mulville/Buffalo News)

Fiona Hickey, left, and Jordan Pursel, center, has a picture taken by Zack Boehler as Brazilian Artist Eduardo Kobra works on a mural of Mark Twain and John Lewis on the side of 1188 Hertel Ave. on July 23, 2019. (Mark Mulville/Buffalo News)

Brazilian Artist Eduardo Kobra works on a mural of Mark Twain and John Lewis on the side of 1188 Hertel Ave in Buffalo Tuesday, July 23, 2019. (Mark Mulville/Buffalo News)