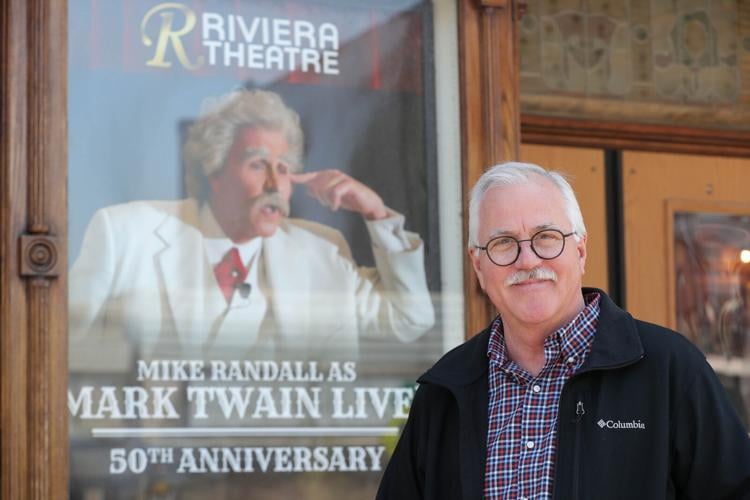 Mike Randall is pictured in front of a poster outside the Riviera Theatre for his 50th anniversary show of "Mark Twain Live!" 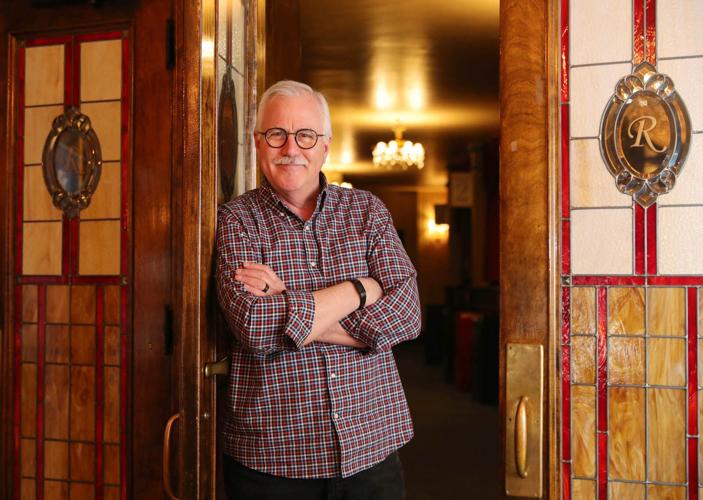 Mike Randall celebrates the 50th anniversary of his one-man show "Mark Twain Live" on May 14 at the Riviera Theatre.

Mike Randall is about to celebrate his 50th anniversary of being Mark Twain, which means he has been “Mark Twain” even longer than Mark Twain was Mark Twain. One has to believe Samuel Langhorne Clemens, who used the pen name for a mere 47 years, would appreciate the irony.

Clemens first signed the name to his writing when he was in his 20s (that’s according to Ken Burns’ research). Randall began being a “Twain” in his teens, and he has the papers to prove it.

It’s actually one paper: The original program from the Rosary Hill College (now Daemen University) fundraiser, when the self-described “drama rat” college freshman first donned the famed writer’s signature white suit and stepped before an audience. The suit was baggy on Randall’s angular frame; his thick head of dark hair was sprayed white; and his face was heavily made-up, transforming the gangly 18-year-old into a 70-year-old man.

The suit fits a lot better now, and Randall, at age 68, jokes that he needs a lot less makeup to look the part. He has donned a wig for about 40 years, since he wears his own hair shorter, but he’s ditched the fake nose and jowls. As he has become more comfortable onstage over the years, he said, he relies less on being a look-alike and instead tries to evoke the spirit of the literary master.

Those who know Randall from his other long-running career consider him a natural for the role. He has been a reporter, morning show anchor and meteorologist with WKBW-TV for nearly 40 years, longer than any other member of what was once known as Buffalo’s Eyewitness News team, including those in the station’s heyday triumvirate - Irv Weinstein, Rick Azar and Tom Jolls.

“No one tells a story better, from the quirky to the semiserious. Mike has a style that no one has matched,” Pasceri said. “He has great timing and he can really ‘read’ a room.’ ”

Like Twain, Randall has a talent for knowing just the right moment for the raised eyebrow, the sideways glance and the perfectly timed pause. The same expressions that a top features reporter would use on television apparently translate well to the stage. The main difference is that, for “Mark Twain Live!,” he isn’t working alone.

“Understand,” Randall said, “It’s a two-character show. The audience is the other character. You’re riding the laughter and responding to it. Twain did this (in his touring shows). He’s the first one to do the ‘Jack Benny pause,’ " Randall said as he pauses. "Then he comes in with the punch line.”

“I was seldom able to see an opportunity until it had ceased to be one.” – Mark Twain

Randall has surprised even himself with the ongoing popularity of his “Mark Twain Live!”

“I didn’t do this thinking I would be performing as Mark Twain forever,” he said. “Back then I wanted to be like (WKBW radio DJ) Danny Neaverth.”

He didn’t plan on being like his high school friend who did a Mark Twain bit, but when his appearance at Rosary Hill College went well, he tried being Twain in a talent competition at a Ruby Reds Pizza place. It must have seemed educational, because that led to an invitation to bring his act to an assembly at Springville-Griffith Institute.

“We had to get up incredibly early to get to Springville, because it was a daytime show, during school, and it took three hours to get the makeup done,” Randall recalls. Fortunately, he said, he had a friend helping him. “It must have gone all right, because afterward the principal came down and said ‘We don’t have much money for these things but here’s $25. Buy some more makeup and get yourselves a couple of beers.”

“And that was the first time I realized I could actually get paid for doing this.”

“Nothing so needs reforming as other people’s habits.” – Mark Twain

It may have ended there, except for Randall’s father. During summer break from college, Randall was working nights at a fast-food place and absolutely miserable. His Dad intervened, suggesting, “Why don’t you take your (Twain) stuff to the Showboat?" (The Showboat was a floating entertainment venue on the Niagara River.)

“I didn’t want to but he said if I didn’t do it, he would,” Randall said. So, he went and he got work doing his act in one of the boat’s dinner rooms. The late Doug Smith, one of the region’s most prolific media writers, reviewed the show well, giving Randall a clip to send out to find other work.

Eventually he landed jobs in the Washington, D.C., area while still attending college in New York. In Northern Virginia, one four-week dinner theater gig turned into 12 weeks, and every paper in the D.C. area reviewed his show.

The result: New York City noticed Mike Randall, and off he went to a five-week run at the Little Hippodrome theater. The run received “lukewarm” review in the Big Apple, Randall said, “although some were kind.”

The New York show also got him another kind of attention.

By the mid-1970s, actor Hal Holbrook had been performing his “Mark Twain Tonight!” show for two decades, winning an Emmy for a television version of the show in the late 1960s. Randall had even seen the show once in Canada.

The lawsuit sent him for a loop.

“I was doing dishes for money and Hal Holbrook was suing me. I couldn’t believe my little show would be a threat to him,” Randall said. However, it was a tiny bit flattering.

Eventually, he and his attorney met with Holbrook and his three attorneys, who wanted Randall to never perform as Twain again. Randall didn’t see that as fair. Twain’s writings were in the public domain by that time, “and I knew I had in my show pieces that Holbrook never did.”

There were some embellishments, however, that the attorneys called “Holbrook-isms,” and those had to come out. Randall happily agreed, and since then he has refined and tweaked his show with his own special touches, “that aren’t really Twain, but sound like him. Twain-isms.”

He has even developed sympathy for Holbrook’s position.

“Mark Twain was his act, his bread and butter. Now it seems that a lot of people think they want to do Twain, when they retire or something, and I even get calls from people who want me to give them my script for the show," Randall said, injecting a Twain/Benny pause. "Nooooo!”

Randall has taken his Twain to Huck Finn festivals, opera houses, churches and schools, nightclubs and theaters, libraries and community centers. Since getting that first push from his father to market himself, he has always served as his own agent, booking gigs around his television work, and sometimes in the middle of it.

“Mark Twain did the weather once,” he recalls. That was the night he was asked to fill in for a “Jack Benny” who couldn’t do a job in Ellicottville. Randall’s sub at Channel 7 didn’t show up, so the station sent a truck to ski country and Mark Twain finished his show and then came outside to do his impression of a meteorologist. Then-news anchor Susan Banks can be seen trying her hardest not to crack up.

Things slowed down over the past years due to Covid-19 closures and because Randall was diagnosed with kidney cancer just as the pandemic hit. It was found early, his surgery in 2020 went well and, he said, he feels good. And lucky.

He came back to Channel 7 to work part-time, double-masking and editing at home on a laptop, finding the kind of stories and people that he wants to share with others. His former colleague Pasceri believes Randall is probably the best in Buffalo at getting to the heart of what’s important.

“Mike has such a warmness to him, and he never had a big ego, for all his talent,” Pasceri said.

That’s for sure. Randall tells about getting a call recently from a senior center in Williamsport, Pa.

“They said, ‘Are you still doing your Mark Twain show? We booked you 15 years ago, and we’d like to have you back,’ ” Randall said, smiling.

Fifteen years ago? He decided he would take it as a compliment.

Summer Guide: From Plasticiens Volants to Pride, highlights of a summer in music and arts

In-person events of both the large-scale and intimate variety return with a vengeance this summer. The summer’s overarching theme might be see…

“We are shaken as a community. We need to heal,” said ART Executive and Artistic Director Matthew LaChiusa.

With hit after hit, 'Ain't Too Proud' is a nostalgic, energetic celebration of the Temptations

Just like the Temptations themselves, “Ain’t Too Proud” is shamelessly all about the music, hit after hit after hit, and that is plenty, News reviewer Melinda Miller says.

Following the evening show, cast member James T. Lane delivered a message of sympathy, love and unity to the audience and Buffalo on behalf of the touring company that talked of the "mass shooting just a little bit shy of two miles from this theatre."

With a burst of humanity, Ujima's 'Spunk' is what Buffalo needs now

“Spunk,” with its range of humor and pain, pride and shame, is bursting with humanity, delivered with the poetic voice of one of the last century’s most authentic writers.

Aleks Malejs is extraordinary as Emma, an actor in the throes of addictive collapse.

The production is lavish by local standards, but whereas the multimillion-dollar Broadway version was a dizzying and incessant blur of Disney “imagineering,” this littler production allows its young audience to use its imagination.

At Lancaster Opera House, an entertaining 'Joseph and the Amazing Technicolor Dreamcoat' made for our times

By paring down the glam and glitter, the inherent creativity of the music and lyrics takes over the spotlight.

Mike Randall is pictured in front of a poster outside the Riviera Theatre for his 50th anniversary show of "Mark Twain Live!" 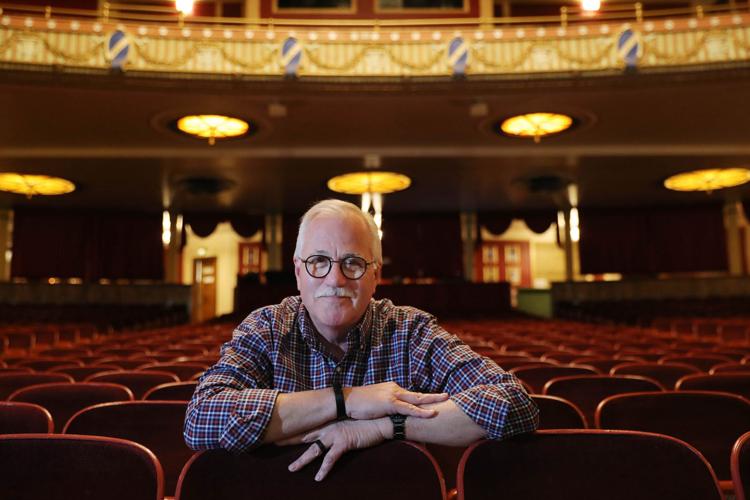 Mike Randall sits inside the Riviera Theatre where he will put on his one-man show "Mark Twain Live!" 50 years to the day he first performed it as a teen.

Mike Randall celebrates the 50th anniversary of his one-man show "Mark Twain Live" on May 14 at the Riviera Theatre. 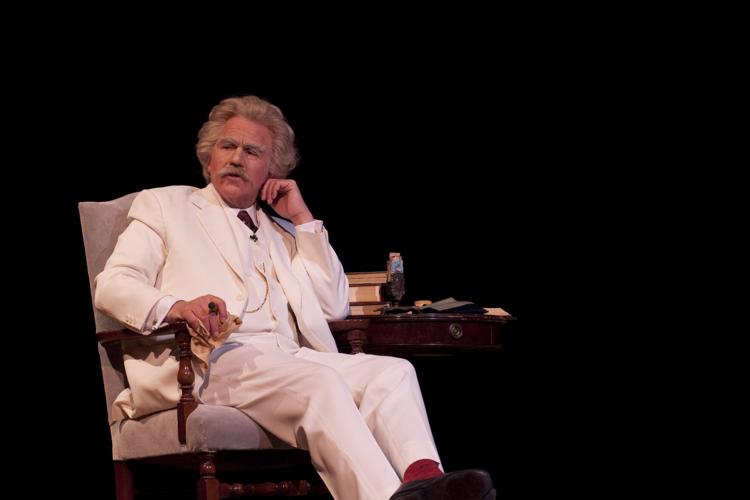 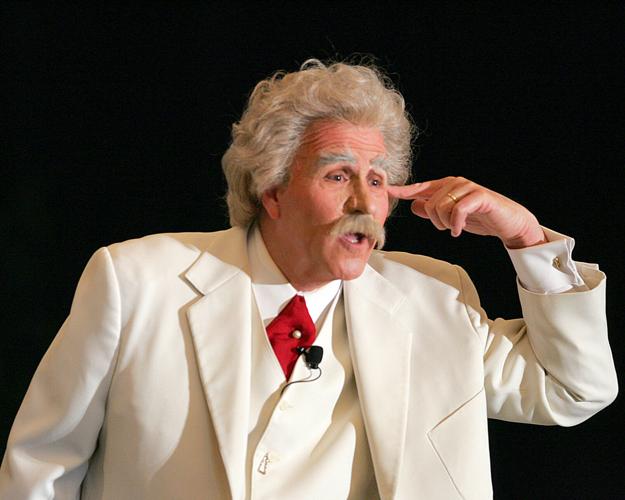 A scheduling conflict once found Mike Randall finishing his Mark Twain show and then, with no time to change, doing the weather for Channel 7 in costume as the author.