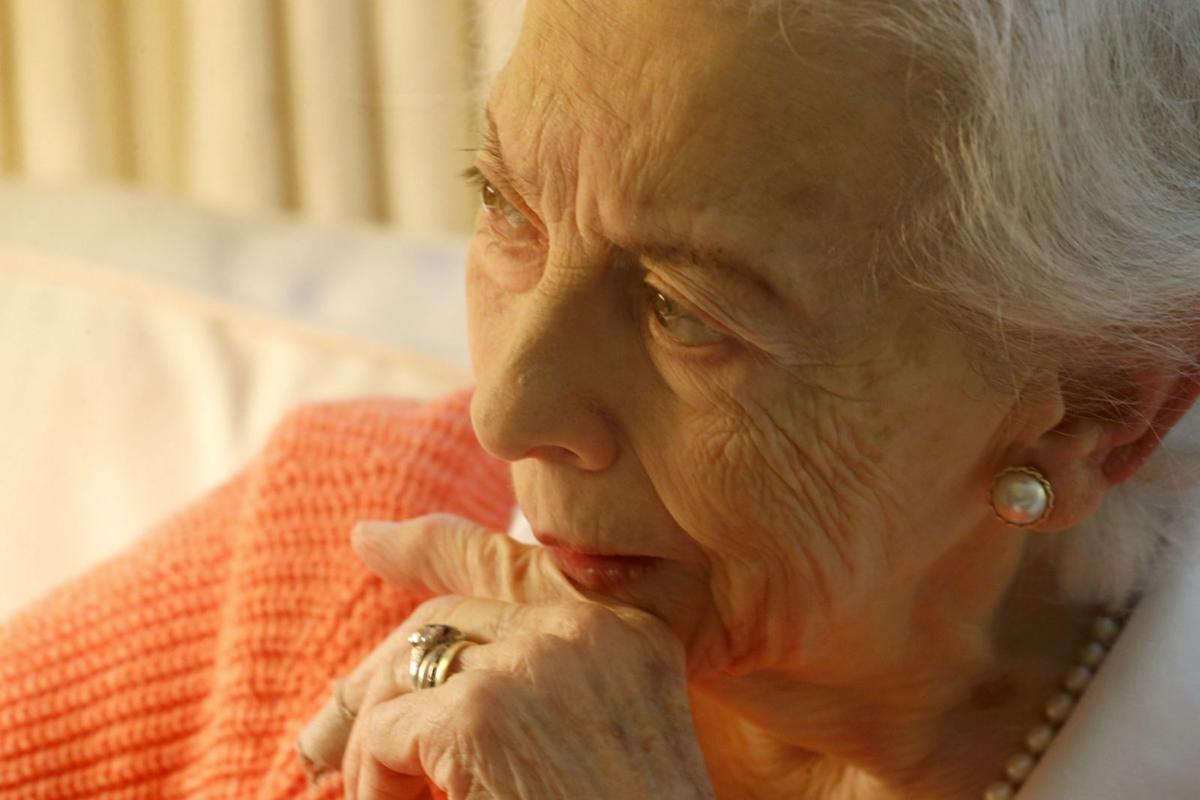 At 94, Nan Clarkson at her longtime home in Buffalo, near Delaware Avenue. (Robert Kirkham/Buffalo News) 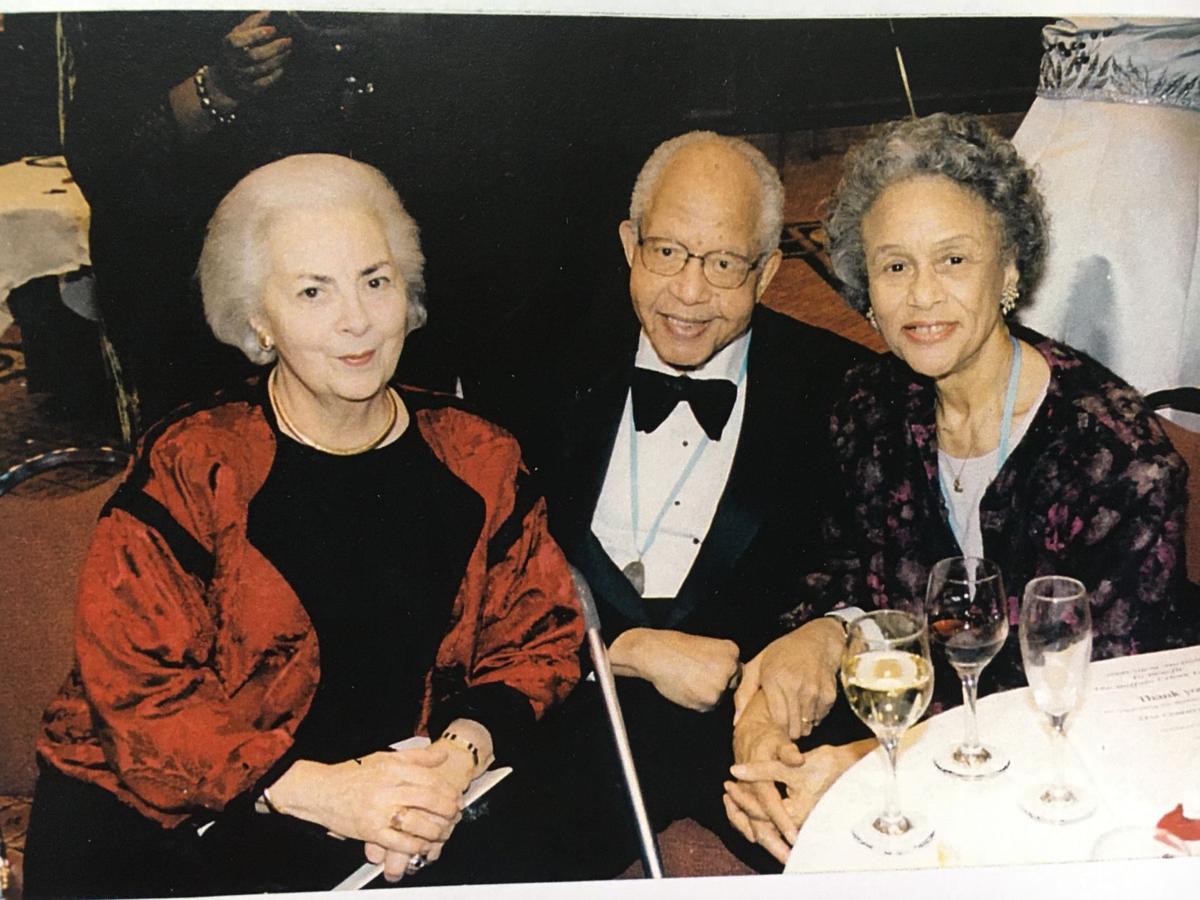 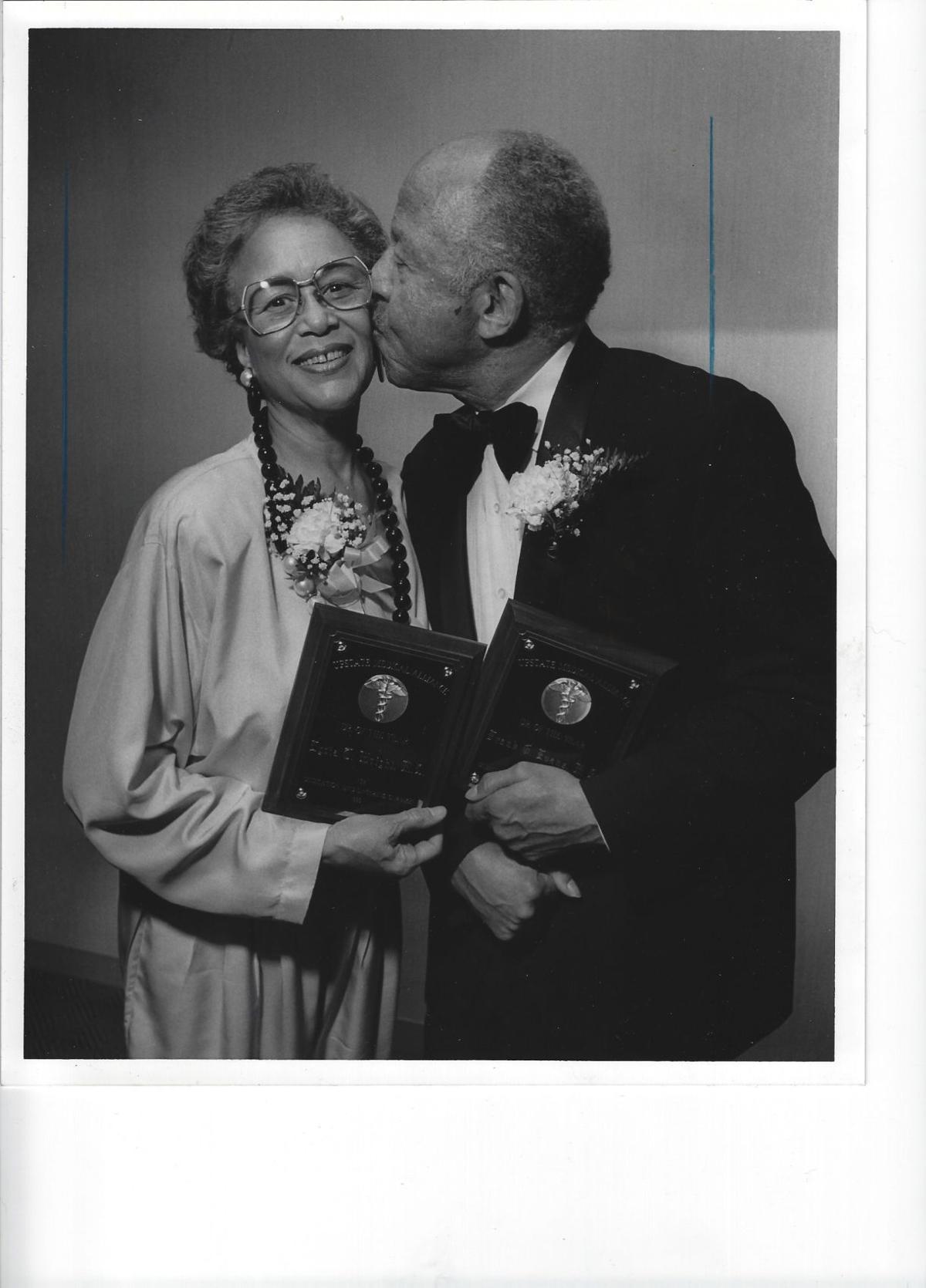 Drs. Lydia and Frank Wright: To Nan Clarkson, a friendship that was a gift from Buffalo. (The Buffalo News file art) 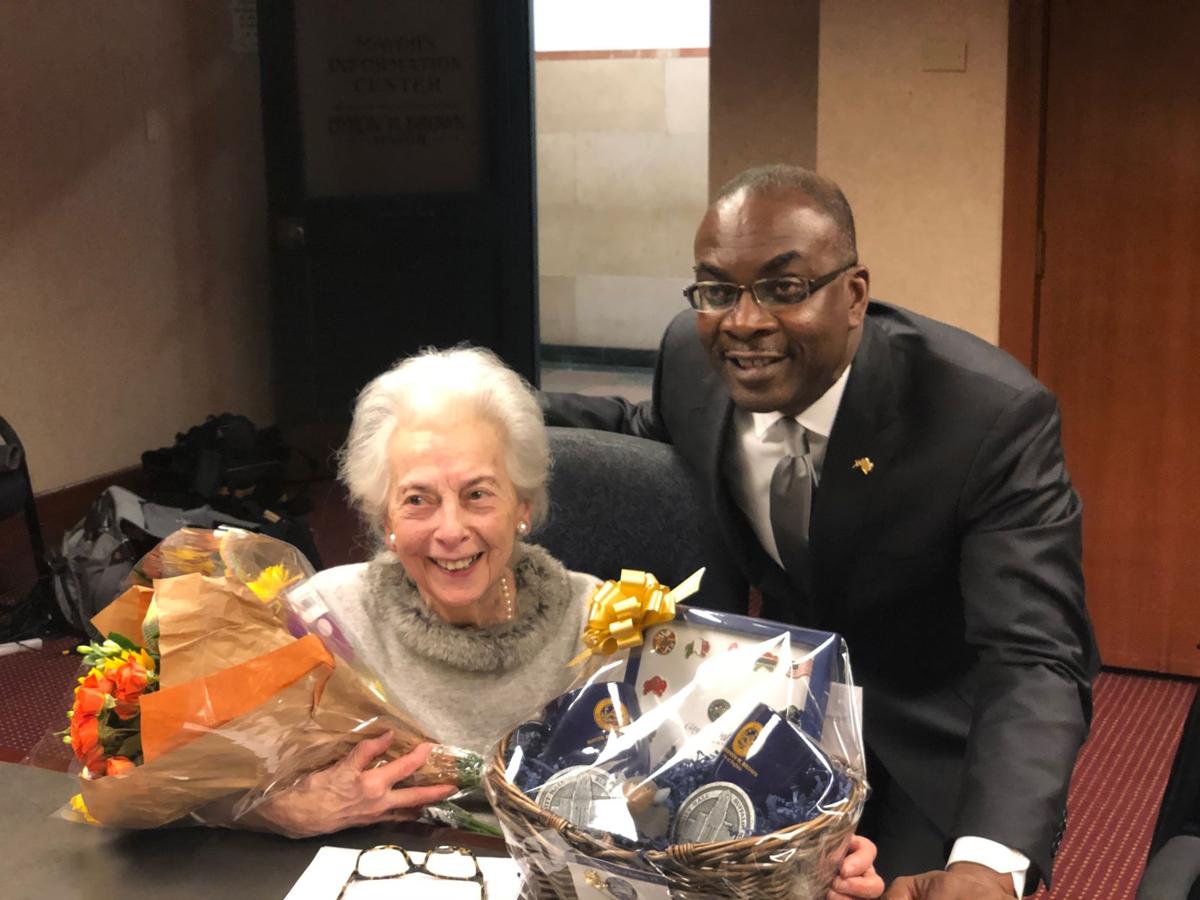 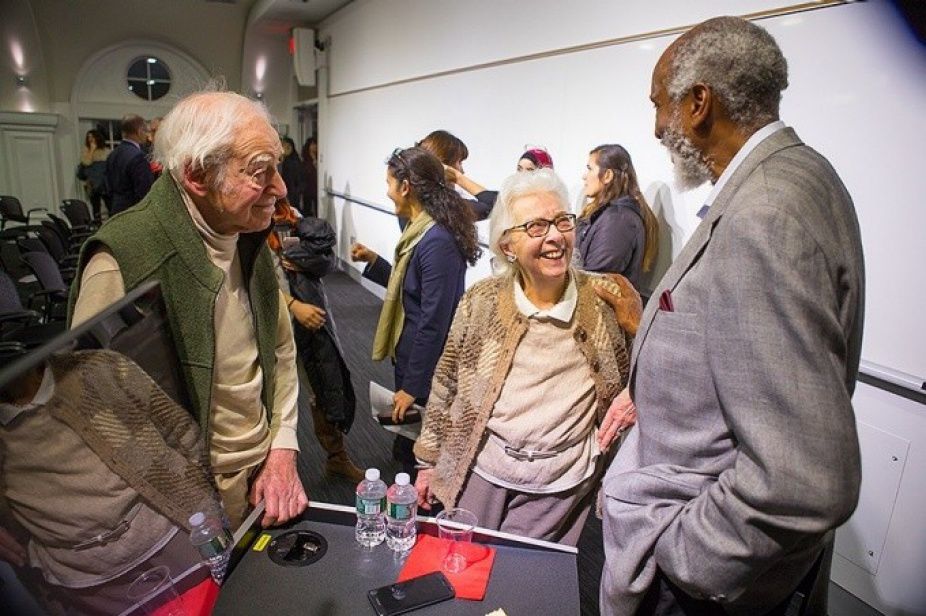 Will and Nan Clarkson meet with recent Clarkson Chair in Planning john powell, a scholar in race, equity and social justice. Photo by Douglas Levere 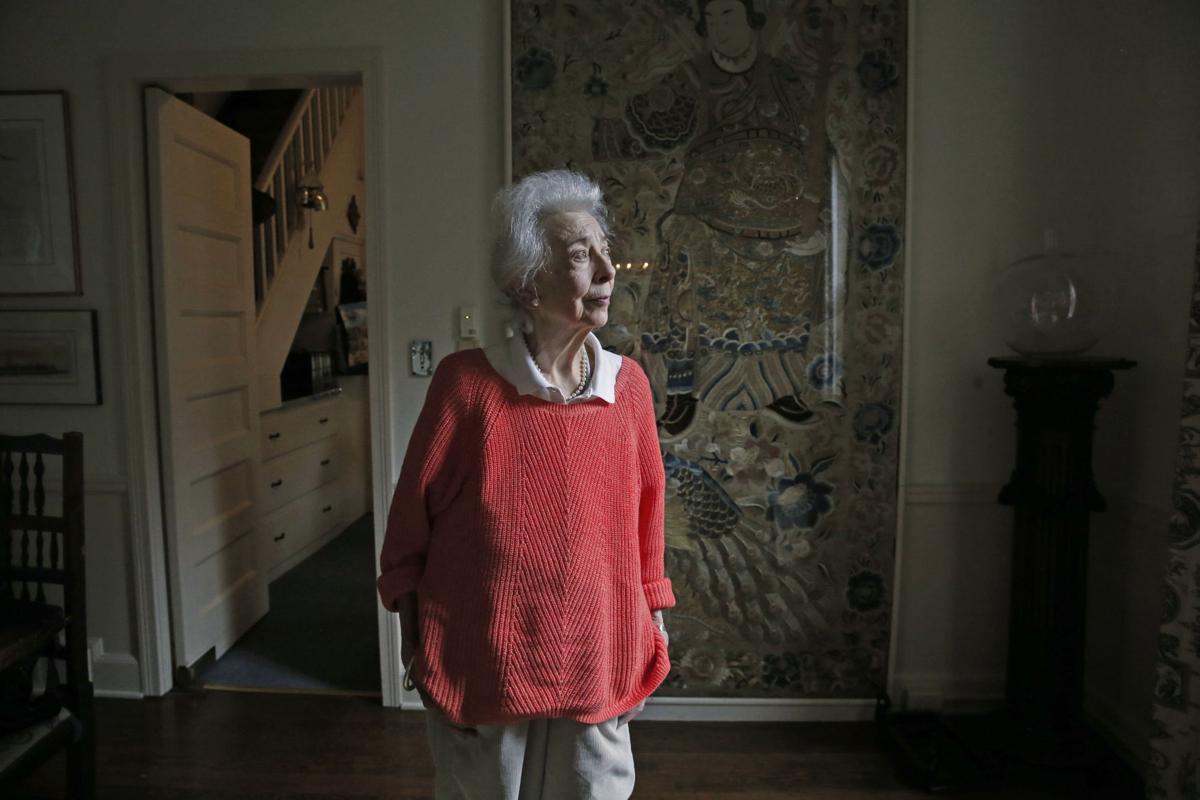 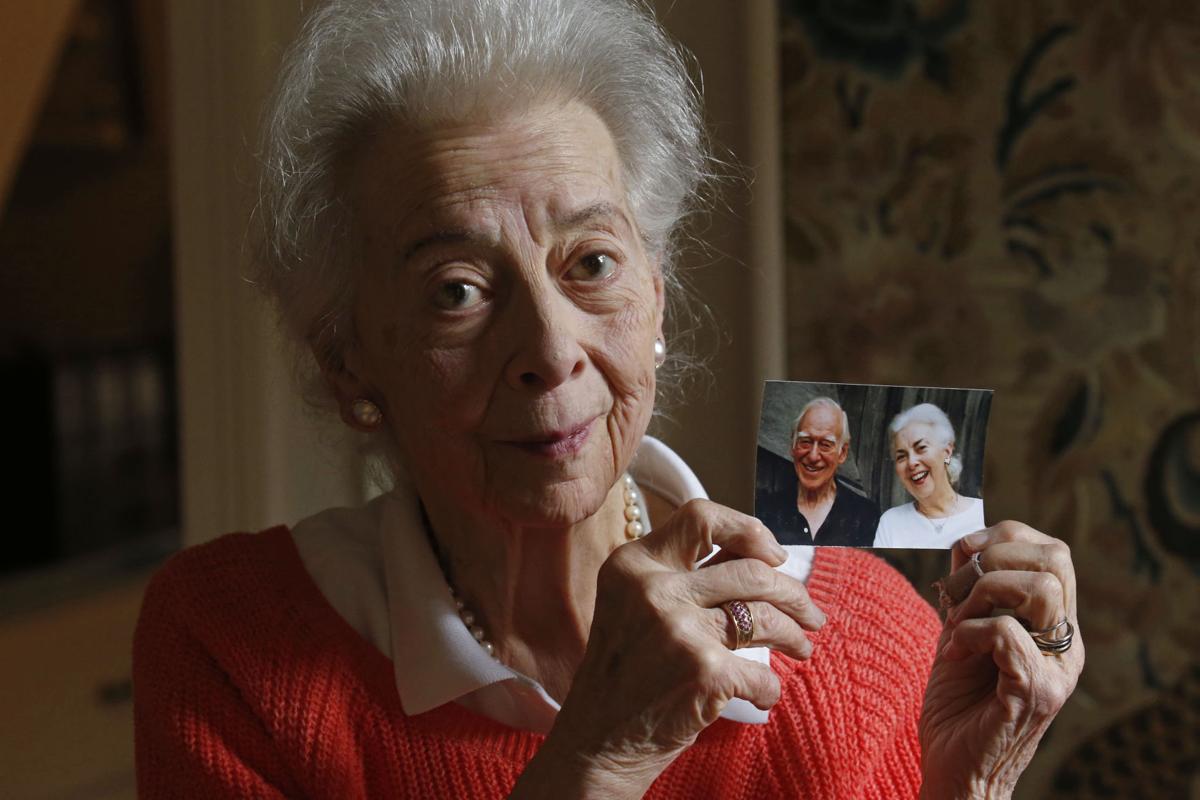 Nan Clarkson insists anything she accomplished in Buffalo was built upon good luck, from day one.

Almost 70 years ago, doors opened as soon as she and her husband Will arrived in the city. Will already had business connections here while Nan's father, a prominent and progressive minister in Detroit, had a friend from Princeton, Rev. Thomas Heath, who helped introduce her to community life at Trinity Episcopal Church.

“We immediately got to know Buffalo through the interesting people we met in that first week,” said Nan, who credits that swift embrace for the way the couple slipped into roles you might describe as part of the civic conscience.

At 94, she offered those thoughts from her longtime family home near Delaware Avenue. It was shortly after Mayor Byron Brown surprised her with flowers at her final meeting of the Buffalo Arts Commission, an organization she helped found three mayors ago and one where she held the title of honorary commissioner, based on decades of helping to shape its purpose.

Both the mayor and David Granville – an Arts Commission member who was executive director for almost a decade – offered gentle rebuttals to the way Nan plays down her role in Buffalo.

“She made a contribution,” Granville said, “that would be difficult to match.”

As she steps away from public life, it would burn up too much newsprint to run through all the museums and galleries she supported, or the countless boards she joined. What many friends say is most striking about Nan and Will, who died in 2018, was their ability, amid some grim times in Buffalo, to see with clarity what ought to be maintained – and what should change.

“Both of them had such a sense of public responsibility for what it takes to make good city living,” said Robert Shibley, dean of the University at Buffalo’s School of Architecture and Planning. He was at UB when the couple endowed the Will and Nan Clarkson Visiting Chair, which annually brings in a luminary for “knowledge-sharing” on critical issues of planning and design.

It was both a selfless gesture and a practical response to decades of planning blunders in Buffalo – including the decision that Alison Clarkson, their daughter and a veteran state senator in Vermont, say her parents saw prophetically as a titanic mistake.

They understood exactly how a new UB campus, eventually built in Amherst, could have transformed downtown.

Catherine Gillespie, chairwoman of the Arts Commission, said Nan's great contributions began with a baseline commitment: She and Will settled in the heart of the city when they arrived, and never left. Indeed, one of Nan’s favorite pieces of family art is a Virginia Cuthbert painting of the old Larkin Administration Building.

Cuthbert portrayed that Frank Lloyd Wright jewel as it was shortly before demolition, a kind of unbearably wistful exclamation point on a civic era of far too many self-destructive choices.

No, Nan insisted when I spoke to her. She did not love the painting for the aching lesson, but for the innate beauty.

To her friends, that sentence pretty much sums her up.

"The poetry of their lives," Granville said of Nan and Will, "helped hold together the things that hold us here."

Will, whose parents brought their children to Canada from England, left Chrysler in 1950 to take a job in Buffalo as an officer at the family business that became Graphic Controls. He had just married Elisabeth Ann Hudnut Clarkson, whom he met in Detroit when she was a moderator at a major gathering for the then-National Conference of Christian and Jews, now the National Conference for Community and Justice.

“I was always waiting for a man who sounded like he was interested in the life around him," said Nan, a direct descendant of the Beechers, a family known both for faith and a passion for civil rights.

The couple carried that sensibility and curiosity to Buffalo.

Nan was already an author. Her first book, “You Can Always Tell a Freshman,” a primer for young women attending college, found a national audience and went into 13 printings. That gave her a fast entrance into the literary world of her new home, but it remains clear – after almost 70 years in this city – that she saw one friendship as a lifetime gift of being here.

She spent much of our interview speaking of Dr. Lydia Wright.

“They were kindred spirits," said Tamara Rowland of Los Angeles, Wright’s daughter. "Intellectually, they had a bond and socially and politically they were on the same path.”

Nan, who is white, came to Buffalo at a time of metropolitan segregation at extremes beyond even the longtime status quo we know today. She recalls attending a lecture by a civil rights author, Sarah Patton Boyle, who maintained the best way of shattering racial barriers was through individual bonds of trust and confidence, friendships built one at a time.

Wright, a pediatrician, was the first African American to serve on the city’s school board. When the old Woodlawn Junior High was built atop what had been Offermann Stadium, Wright waged a battle against attendance policies that all but guaranteed its student body would be almost entirely children of color.

She envisioned diverse magnet schools long before the idea caught on, as well as textbooks that portrayed children of many backgrounds. Nan, who saw Wright for the first time at the Patton Boyle lecture, was moved by what she described as a tangible sense of courage and purpose. After Will heard Nan's admiring description, he had one piece of advice.

She did. It led to a fast bond. Between them, they founded a small and diverse alliance of 20 women called the "Buffalo Independent Group" that met routinely, from home to home, to discuss some of the hardest questions of the times and to transcend barriers through listening, beyond all else.

The Wrights and Clarksons became confidants, a friendship that endured until the deaths of Lydia and her husband Frank. Their daughters, Tamara and Alison, are so close they both served as a bridesmaid at the other's wedding.

Through Wright, Nan absorbed a deeper understanding of the pain of barriers taken for granted for too long. Tamara recalls an era, for instance, when the old Buffalo Evening News essentially ignored the cultural or social lives of people of color. Nan approached editors at the paper and insisted – successfully – that they think again and provide coverage for an African American social group to which Wright belonged.

“I love that family,” Tamara said.

While Brown praised Nan for "her selfless service" to the community through her work in the arts, the mayor's statement made a point of acknowledging the mission that linked her to Wright, "her decades of personal efforts to encourage the inclusion and diversity here in Buffalo."

A two-hour conversation with Nan barely captured a fraction of her reflections on the city. She was her husband's sounding board during the years when he chaired the task group that coordinated the new design around Fountain Plaza. She shared the civic urgency that caused Will to push ahead with “Buffalo Architecture: A Guide,” a testament to the architectural riches of a city under siege.

Judy Miller, a close friend, said it is difficult to do justice to the mutual commitment that defined Nan and Will, who died 19 months ago. As for Nan's decision to leave the Arts Commission, it arrives at a point when she plans to spend much of her time with her three children and their families, which carries a touch of a farewell.

“We loved and cherished the wonderful things about this city,” said Nan, whose daughter describes her as "a force of nature."

Over the last few years, she occasionally had dinner with Joan Bozer, 91, a former Erie County legislator who leads a similarly inspired civic life in Buffalo. “She is so vital and always interested in everyone,” said Bozer, speaking of the rare friend who has the same long arc of perspective.

Certainly, Bozer said, some of the most heartbreaking struggles they encountered remain formidably entrenched. Yet Bozer said Nan has lived to watch at least some of the sensibilities she championed outlast a bleaker time, a legacy intertwined with a kind of elemental impulse they both dreamed for years would take command in Buffalo.

She always listens, Bozer said. That is how you find your city.

This is a play for Jews and non-Jews alike. If you know, you know. If you don’t, you’ll learn.

At 94, Nan Clarkson at her longtime home in Buffalo, near Delaware Avenue. (Robert Kirkham/Buffalo News)

Drs. Lydia and Frank Wright: To Nan Clarkson, a friendship that was a gift from Buffalo. (The Buffalo News file art)

Will and Nan Clarkson meet with recent Clarkson Chair in Planning john powell, a scholar in race, equity and social justice. Photo by Douglas Levere