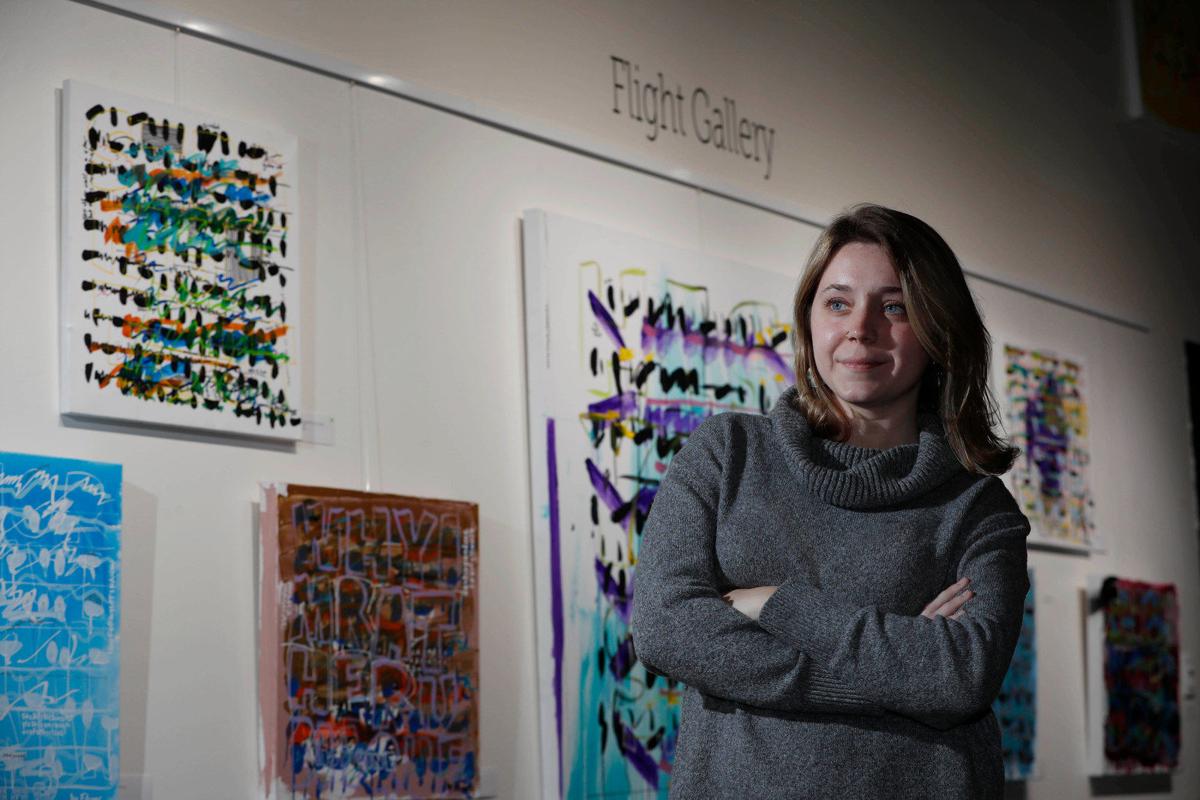 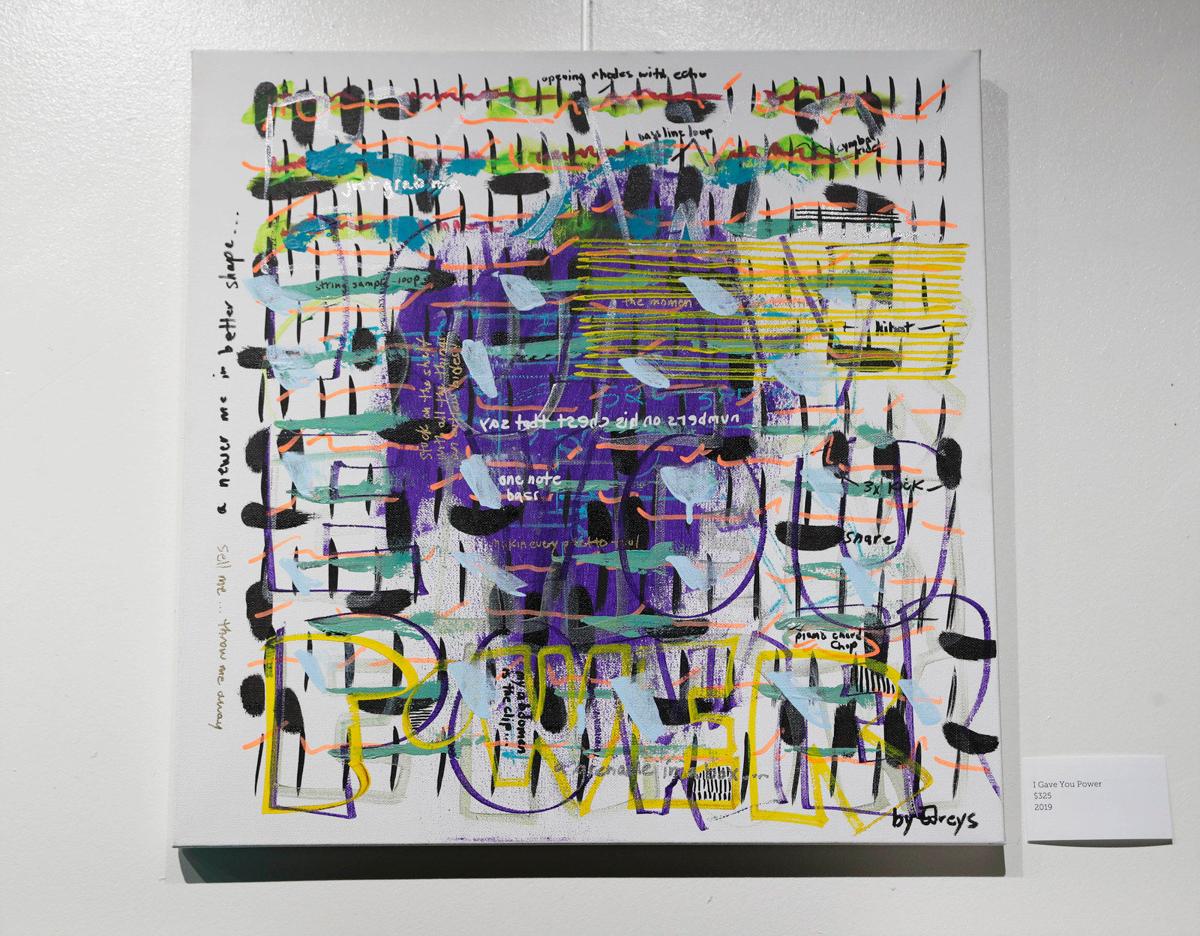 The painting "I Gave You Power" is one of the paintings by Edreys Wajed showcased in his new exhibit at Flight Gallery in Flying Bison Brewing Co. (Sharon Cantillon/Buffalo News) 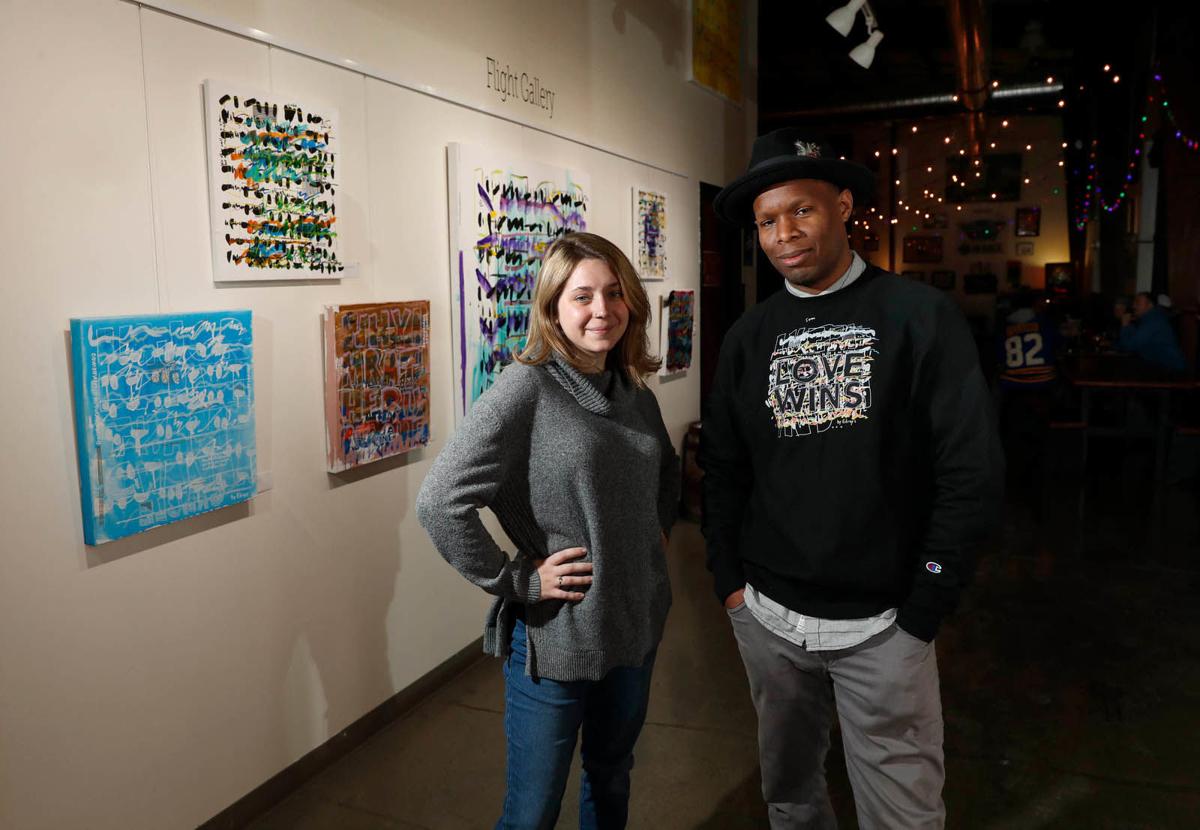 Whether with its production, pours or ambitious packaging, craft beer is long past the point of being considered an art form. Find the right draft and its frothy, full-bodied presence can generate more mouths agape than the most abstract work of Jasper Johns.

Now a year later, it can celebrate its innovative initiative’s incarnation, while providing an unconventional backdrop for Buffalo-area artists to feature their freewheeling creations. Flight Gallery marks its anniversary with the launch of Edreys Wajed’s music-inspired “Playlist,” which continues through January.

An ambitious schedule of concepts will follow across its yearlong schedule, and exhibits will continue to deliver on the initial aims of Flight Gallery’s founder, Parrish Gibbons Herzog.

“My goal has always been to make the beer scene inclusive and accessible, and I've actively done that within the art world, too,” said Gibbons Herzog, who first established the creative area inside her family brewer’s space with the work of visual artist Ashley Johnson. “Flight Gallery's name is very much a play on the aviation components of Flying Bison, as well as being a mini-gallery where people can enjoy a sample of local art.”

Set within a sectioned expanse adjacent to the entryway of the Larkinville brewer’s taproom, the small gallery will host the work of eight artists in 2020, all hailing from a variety of mediums and artistic inspirations. Some themes will be Buffalo-related, but it’s not a requirement. Gibbons Herzog said works will consist of those chosen collaboratively between her and the artist.

With Wajed – a Buffalo native who boasts recognition as a celebrated visual artist, poet and musical entertainer – Flying Bison will provide a reverberating environment for his rhythmically inspired display.

“My creative process begins by selecting a song that I have a connection with emotionally or association with from memories throughout my life, past and current,” said Wajed, whose work has been exhibited inside Buffalo's Gallery 51 and Garret Club. “The song is played on repeat for several minutes, sometimes hours if necessary, as this begins the study of the song, its parts, vocals and instruments. Each painting stands as a visual representation of the audio recording and song itself with emotion, bounce and vibration.”

This is an ambitious concept, one that can be complemented by a cacophonous environment. And inside an expansive brewery space like Flying Bison’s – which hosts everything from charity benefits to chili cook-offs while catering to its everyday imbibers of craft drafts and cask offerings – that accommodating layout is evident, with the opportunity to enjoy more than beer. Fellow area brewers have thrived with spaces that present their eclectic selections against a part-game room, part-restaurant backdrop, and Flying Bison is no different.

But with the direction of arts community veteran Gibbons Herzog – who currently promotes artistic programming for Lockport’s Kenan Center, and has worked with organizations including the Arts Services Initiative of WNY since returning to Buffalo in 2007 – Flying Bison is bringing art and beer lovers into a common place for uncommon appreciation.

“As a lover of art, and craft beer, my experience has taught me that those are often two different audiences,” said Gibbons Herzog. “I wanted to create a space where both come together and co-exist, where someone who might not walk into a gallery will be exposed to artwork by simply walking into a brewery – and vice versa for those eager to see the art space.”

It all seems appropriate for a city that owes a bit of its ongoing resurgence to both dynamic art and ambitious brewing. Photographer Sara Heidinger – who was a featured Flight Gallery artist in spring 2019 – has seen both intermingle not far from Flying Bison in her native Old First Ward. Local history is memorialized within neighborhood murals, and photos of the city’s grain elevators are snapped just steps from small breweries and distilleries. Heidinger said it’s all creative and complementary, so it makes sense that they’re now sharing a setting.

“The term ‘artist’ is pretty vast,” she said. “A brewer is an artist in his own right, so it only makes sense to me that these two things would go hand in hand in this space.”

And maybe this spatial relationship is a logical step for two of Buffalo’s key cultural and tourism drivers. Art and beer, together on display, and in tandem to further entrench themselves into the city’s id. This is just one ongoing example of how it can happen, and its architect Gibbons Herzog hopes it’s not the last.

“Flight Gallery is an example of what you can do with one 13 foot-wide wall," Gibbons Herzog said. “My intent is to continue to manage the space within Flying Bison, and I hope this inspires other business owners to take on similar endeavors.”

Gallery hours: 4 to 9 p.m. Wednesday and Thursday, noon to 10 p.m. Friday and Saturday

From spring flower arranging to a virtual Dyngus Day beer tasting, there's plenty to do virtually in April.

Safe and soul-nourishing: What it's like to make an in-person visit to 5 Buffalo art galleries

The painting "I Gave You Power" is one of the paintings by Edreys Wajed showcased in his new exhibit at Flight Gallery in Flying Bison Brewing Co. (Sharon Cantillon/Buffalo News)